After weeks and weeks of rain and cold, the surprisingly balmy evening running through Victoria Country Park seemed like it might have been a turning point, at least weather wise. This morning the sky was a beautiful shade of blue and cloudless. Spring seemed to have finally sprung and it felt like time for a walk at last.

The morning air was still a touch on the chilly side when CJ and I set out but we took water and snacks with us, along with light coats and hats (just in case the clouds and rain sprang up from nowhere) and set off with plans of walking to Hamble. We both like our walks as green and car free as possible so, as soon as we reached the entrance to the Butterfly walk through Mayfield Park, we headed off road. Given the amount of rain we’ve had over the last few months, neither of us were sure if this was a good idea or not. The fact that the gate was unlocked seemed like a good sign. There were workmen near the entrance beside a huge pile of gravel. They didn’t seem to be doing much of anything except standing around a funny little machine that looked a little like a digger on caterpillar tracks. We didn’t know what they were supposed to be doing but the path was dry and looked to have been compacted by the com8ngs and goings of the machine.  Whether this was the workmen’s intention or not, it certainly made walking easier for us.

Soon enough we’d reached the spot where the fallen tree had almost blocked the trail back in September. The remnants of the old wood sculptures were scattered nearby and the huge dead tree trunk had been moved to the side of the path to slowly rot back into the earth. We might have stopped for a closer look but I was worried the men with their machine would soon be coming up behind us so, after a couple of quick photos, we carried on towards the bridge. 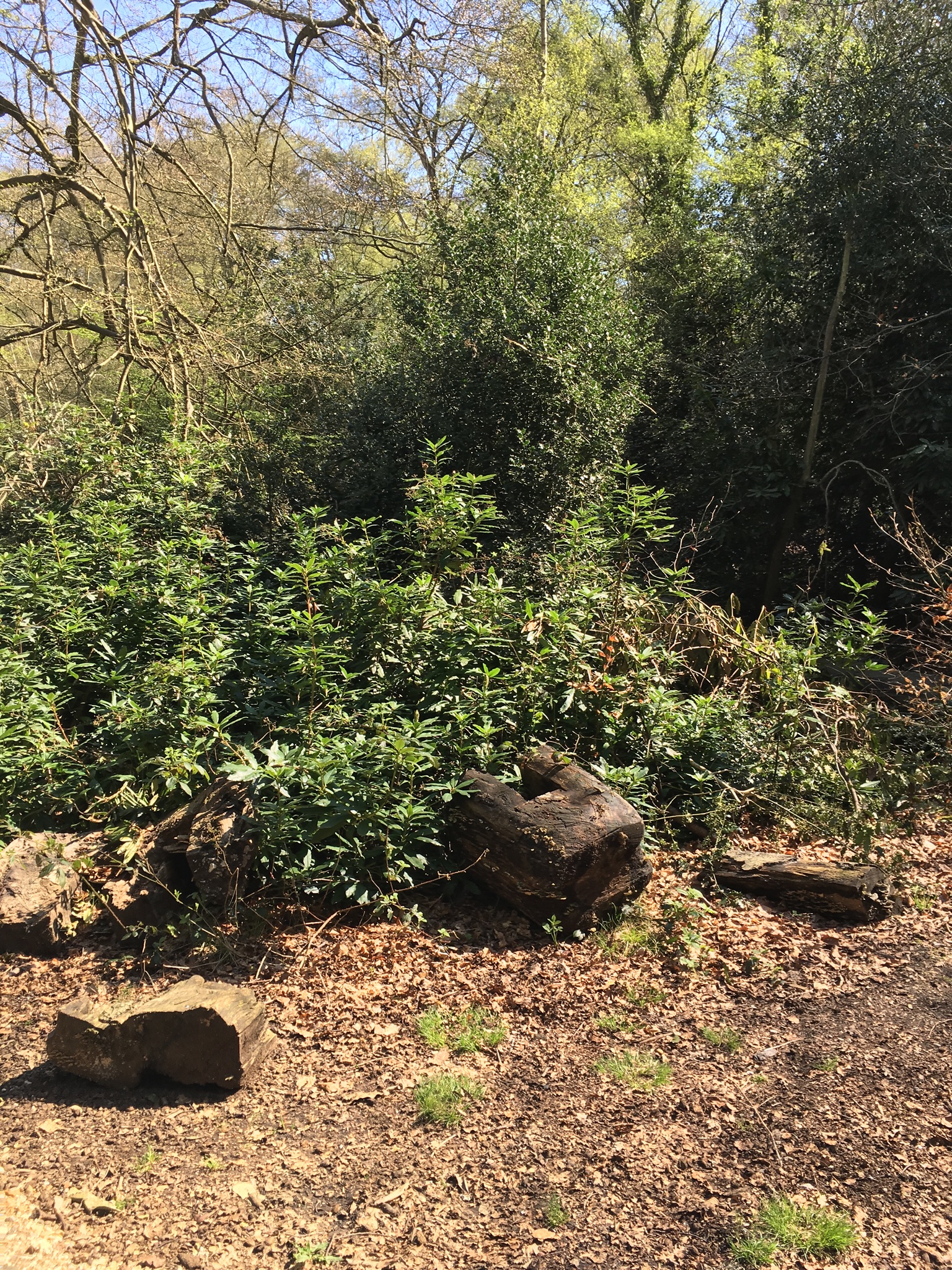 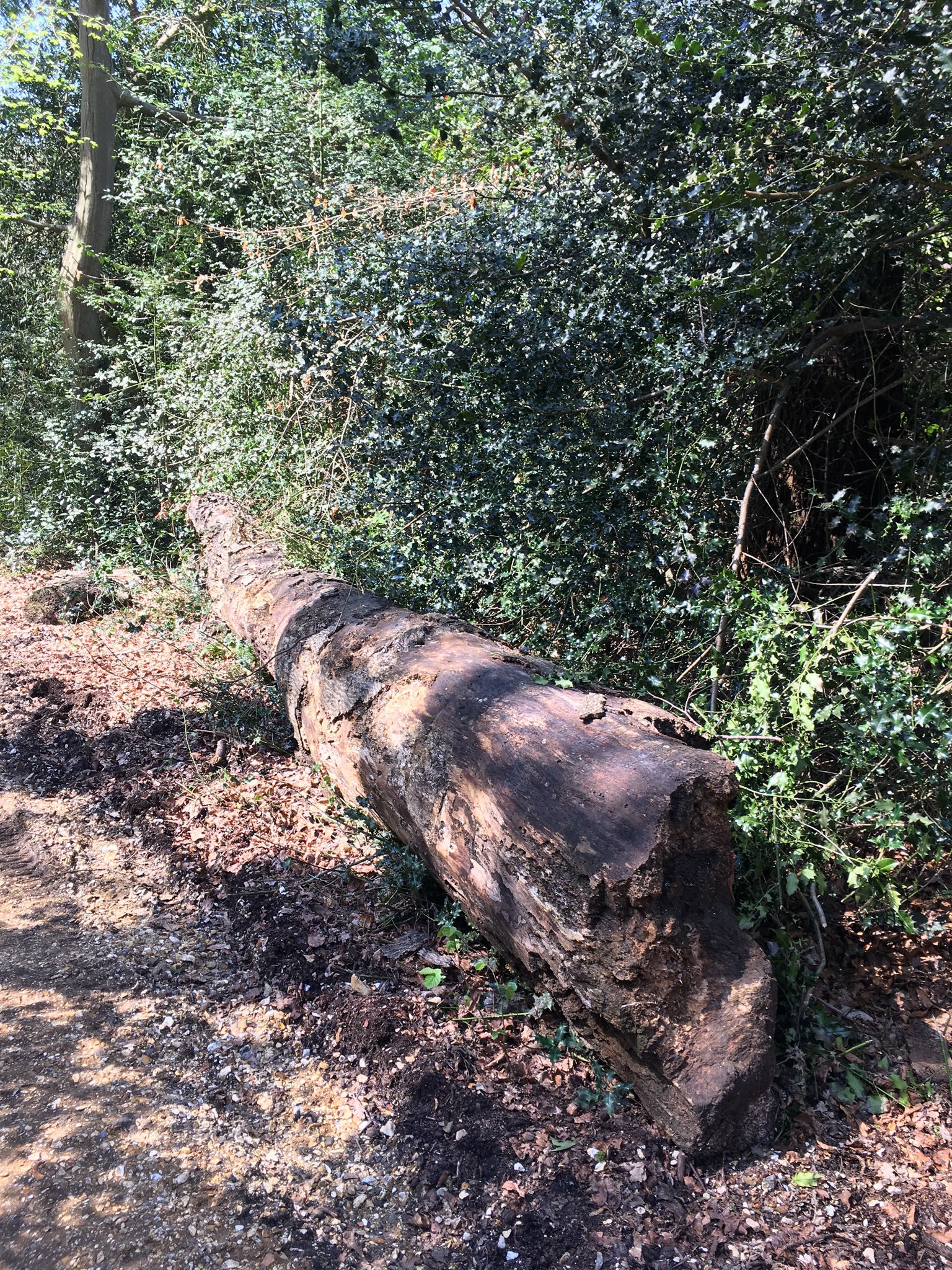 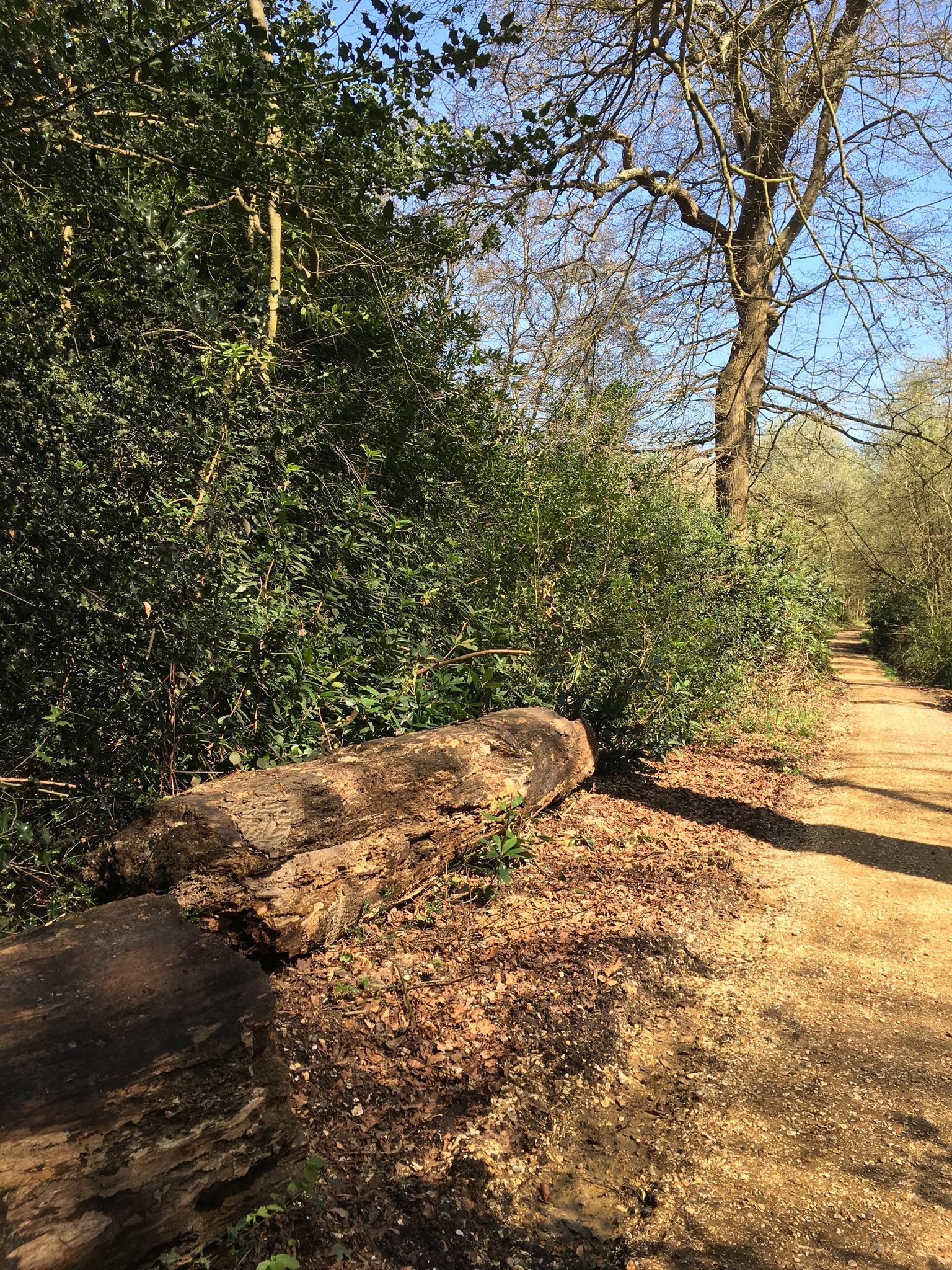 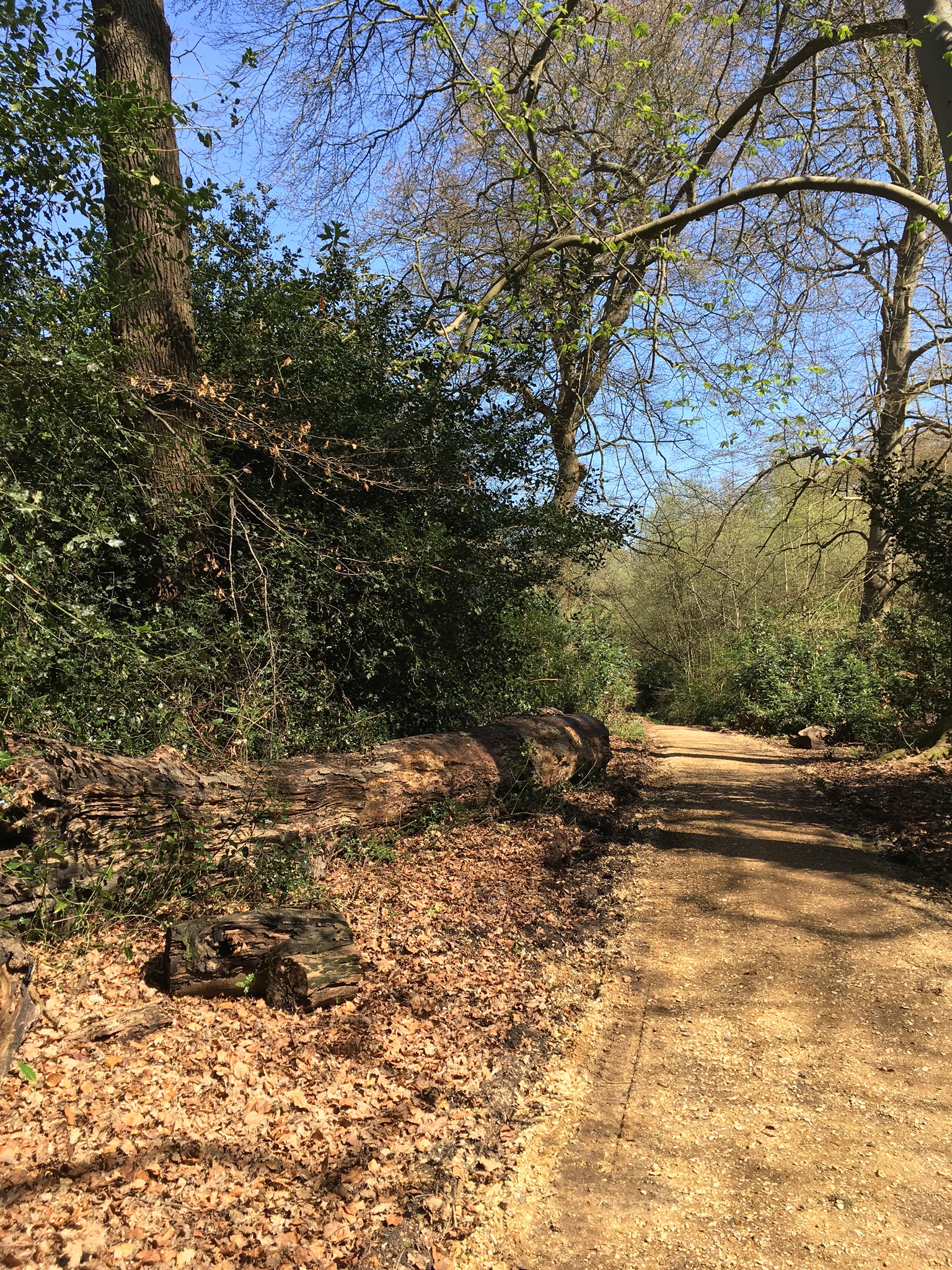 The stretch of trail between the gate and the bridge is usually the driest part of this walk, even in winter. From the bridge onwards the trail is lower and hugs the bank of the unnamed stream running towards the shore. At times the stream seems a little too close for comfort, especially in wet weather when little rivulets of water run down the steep banks to join it. This was the point where we half expected our plan to unravel in a sea of slippery mud. Even the sight of a woman walking two black Labradors and a Alsatian didn’t guarantee the trail ahead was passable. She didn’t seem to be dressed for a muddy walk and  may well have walked down the slope from Archery Road rather than up from the shore. Wherever they’d come from the dogs were enjoying the cool water. 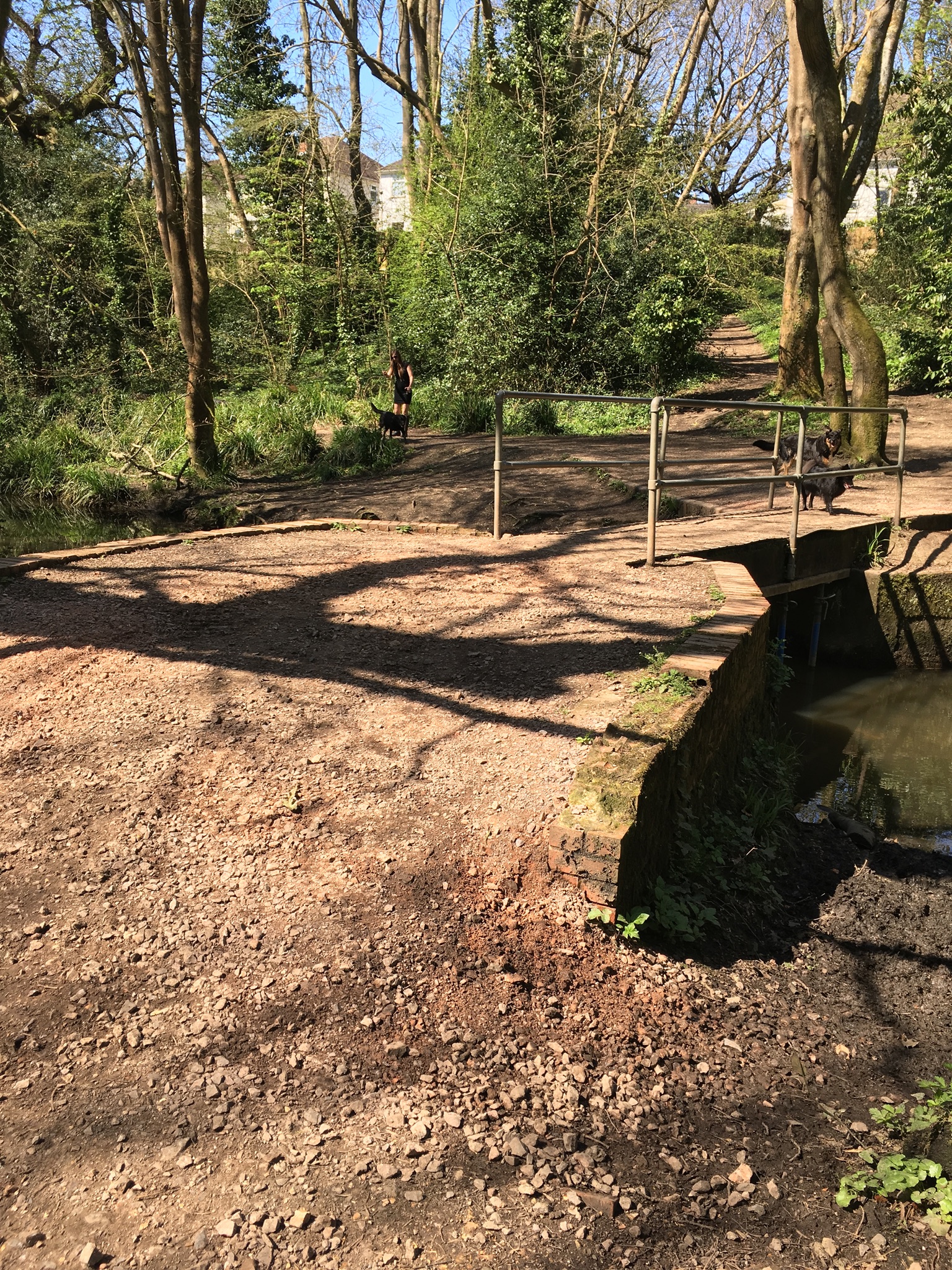 By now the day was warming up but I wasn’t sure there’d been enough sun to dry out the trail after the recent rain. We left the bridge behind us wondering if we’d find the path ahead flooded or so muddy we’d have to climb the slope ourselves. We didn’t have to wait long to find out. 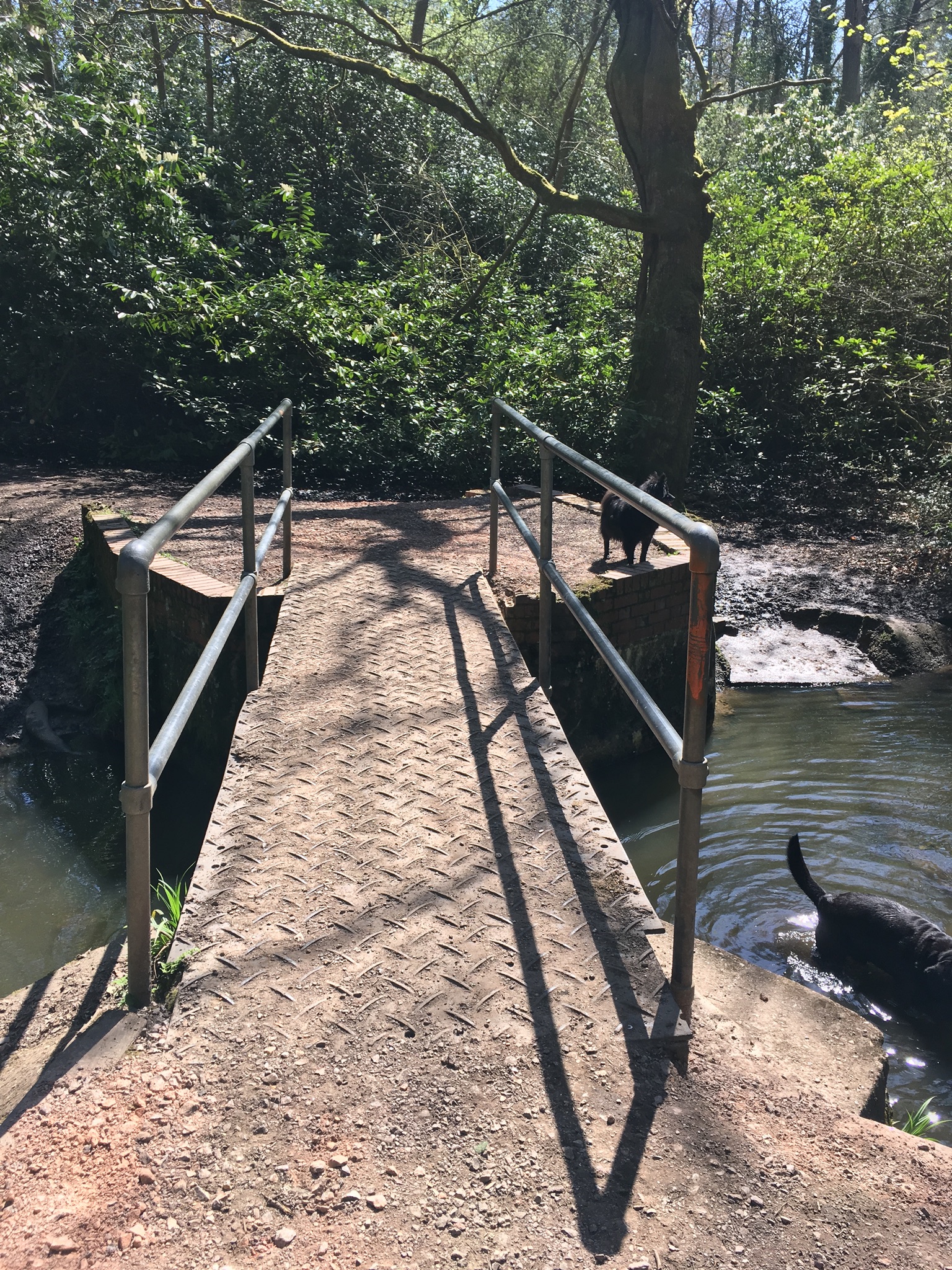 Where we’d expected to find thick, gloopy mud at the very least, there was actually brand new gritty soil, tightly packed down by the tracks of the workmen’s machine. It looked suspiciously like the pile of gravelly dirt we’d seen near the gate. The men had obviously been tasked with repairing the trail and were making rather a good job of it too. 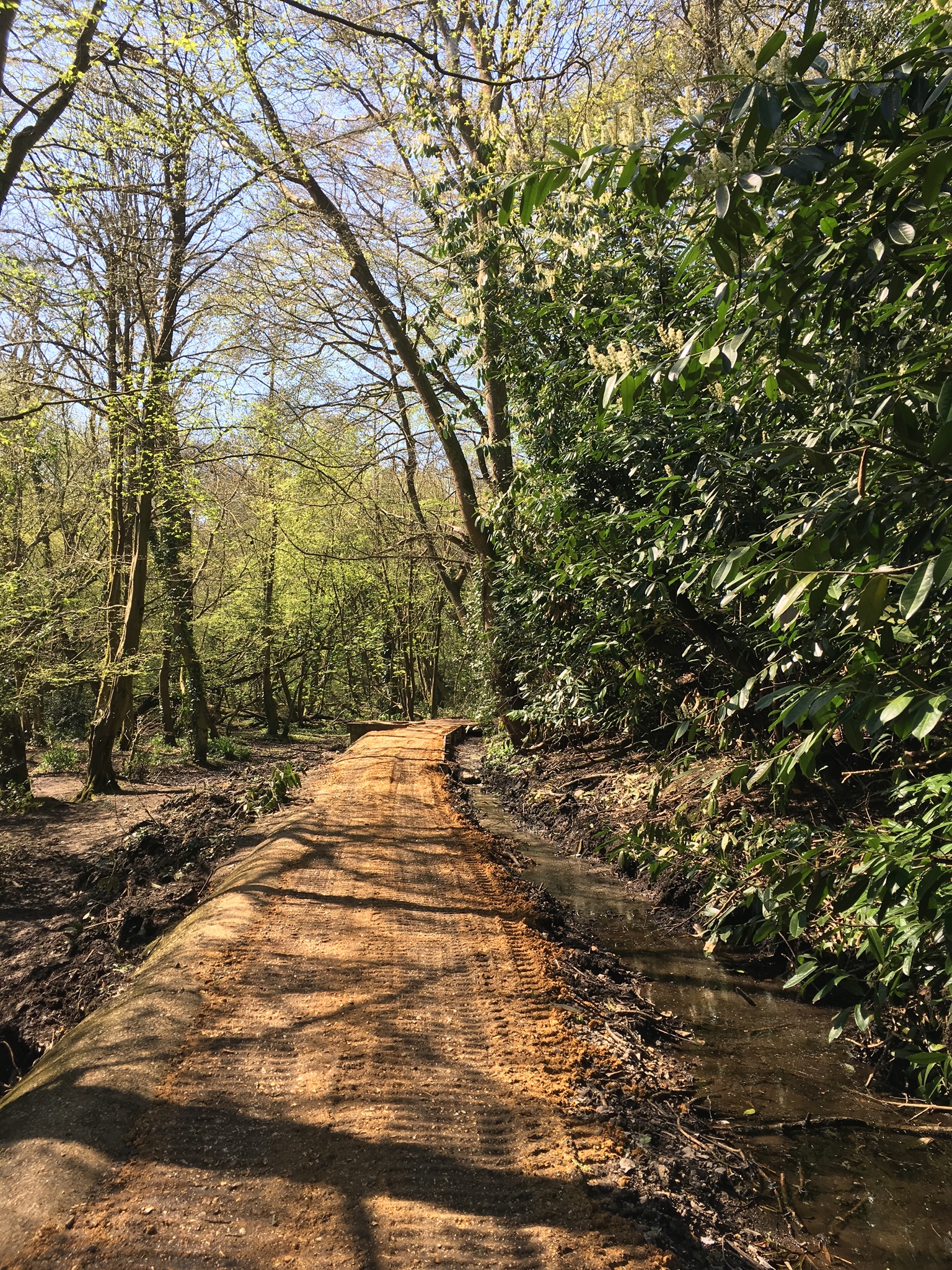 In the places that had previously been the most boggy, they’d used the gravel to raise the path by several inches and had placed wooden battens or sawn logs to keep it in place. They’d even built a flat bridge across one of the wider rivulets, where the new path would otherwise have quickly been washed away. 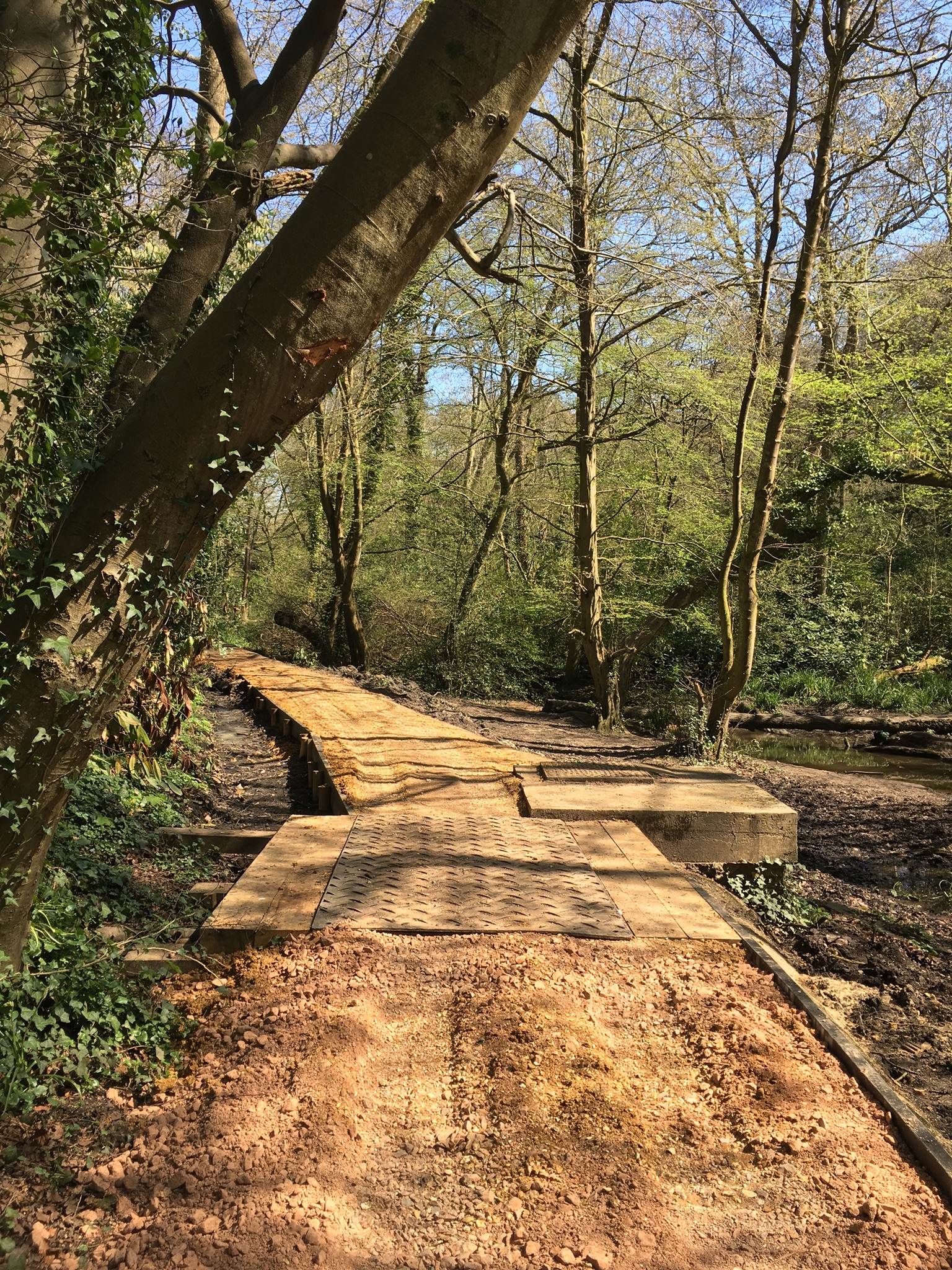 All along the trail we saw the caterpillar tracks and patches of gravelly soil where the worst of the mud had been last time we came this way. It made walking the trail a far more pleasurable experience than we’d expected when we set out but we both knew it probably wouldn’t last. With the workmen and the large pile of gravel at the gate it was obvious their work was far from over and it was only a matter of time before we passed the furthest point they’d reached. 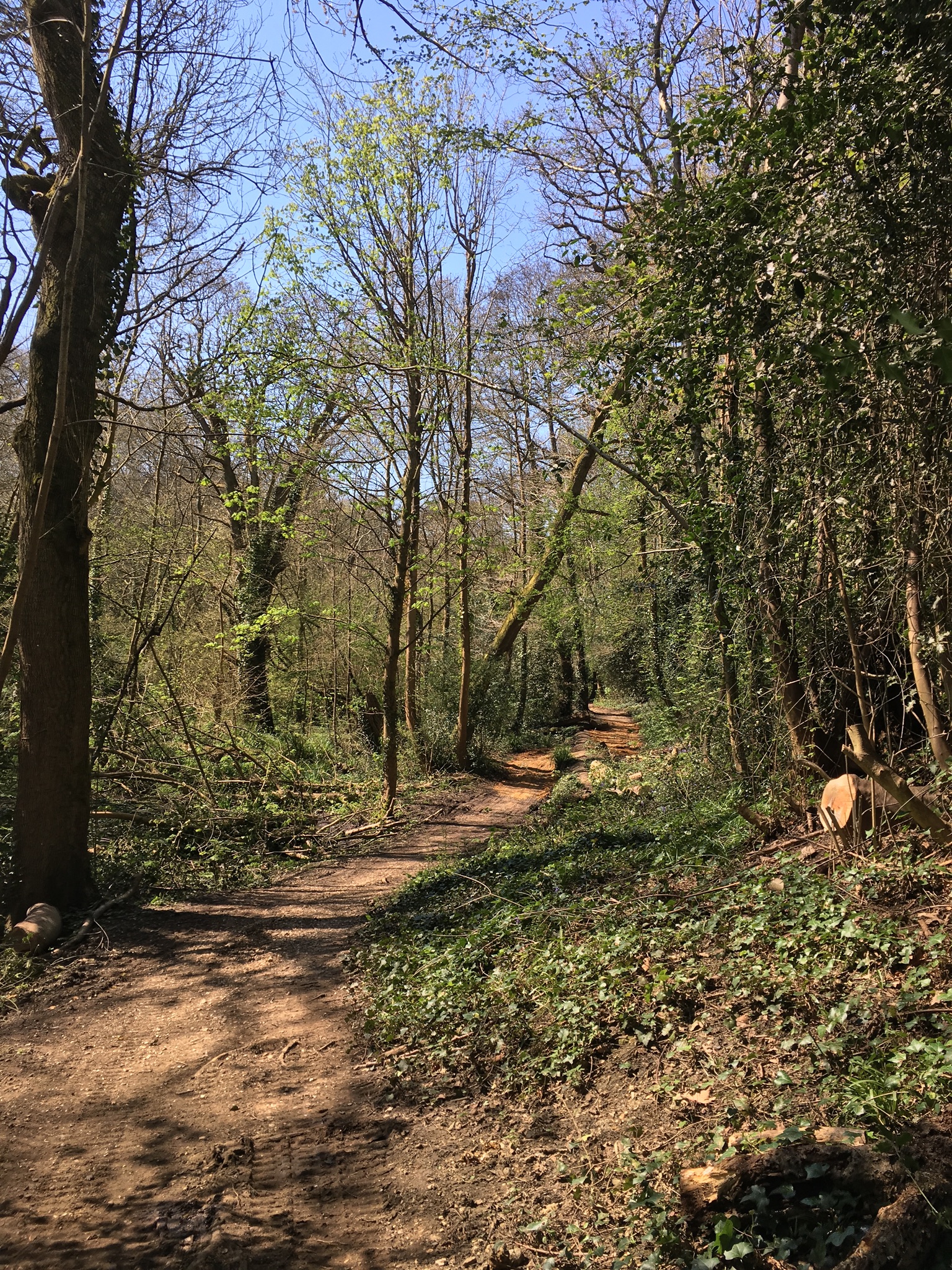 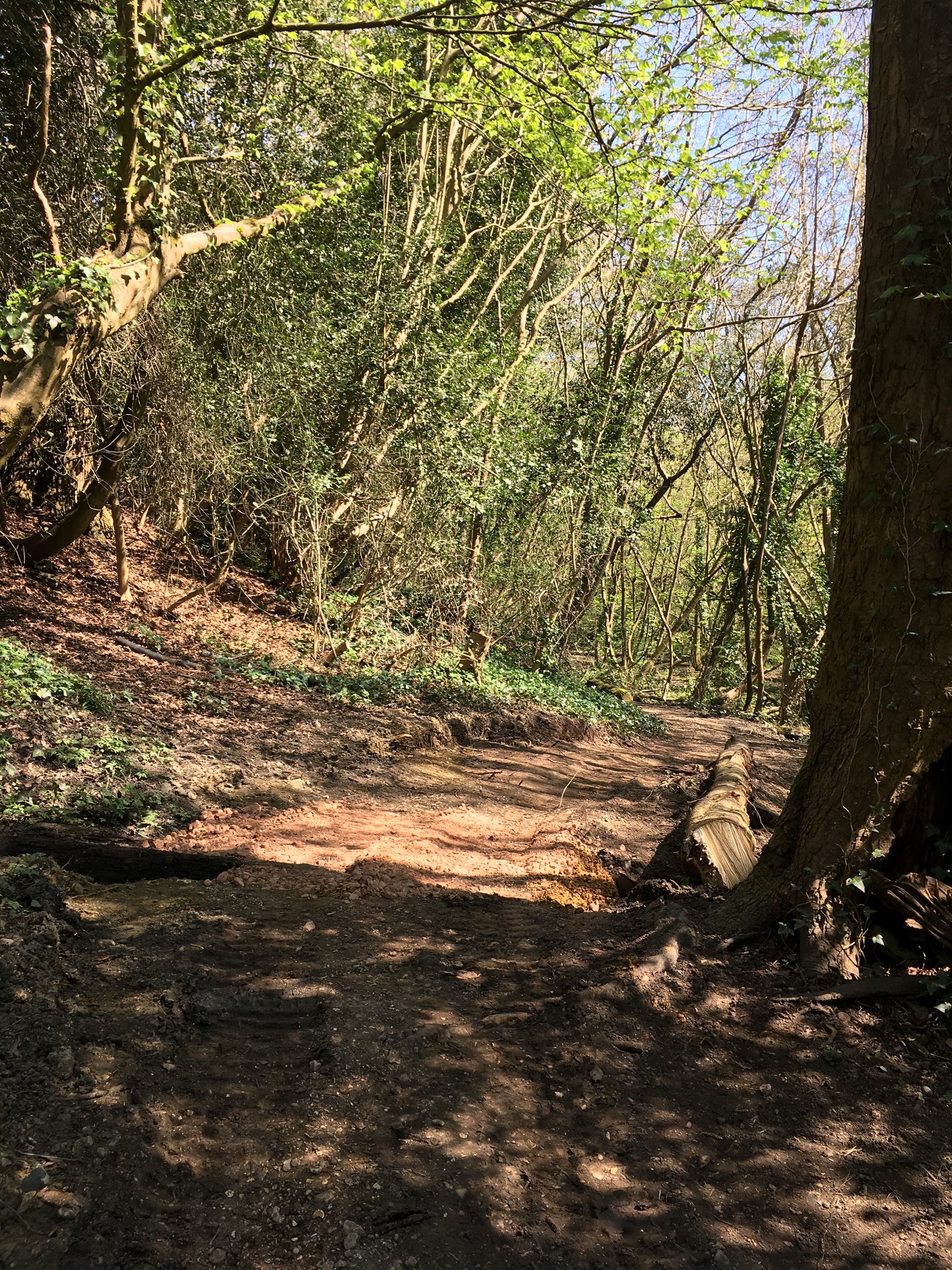 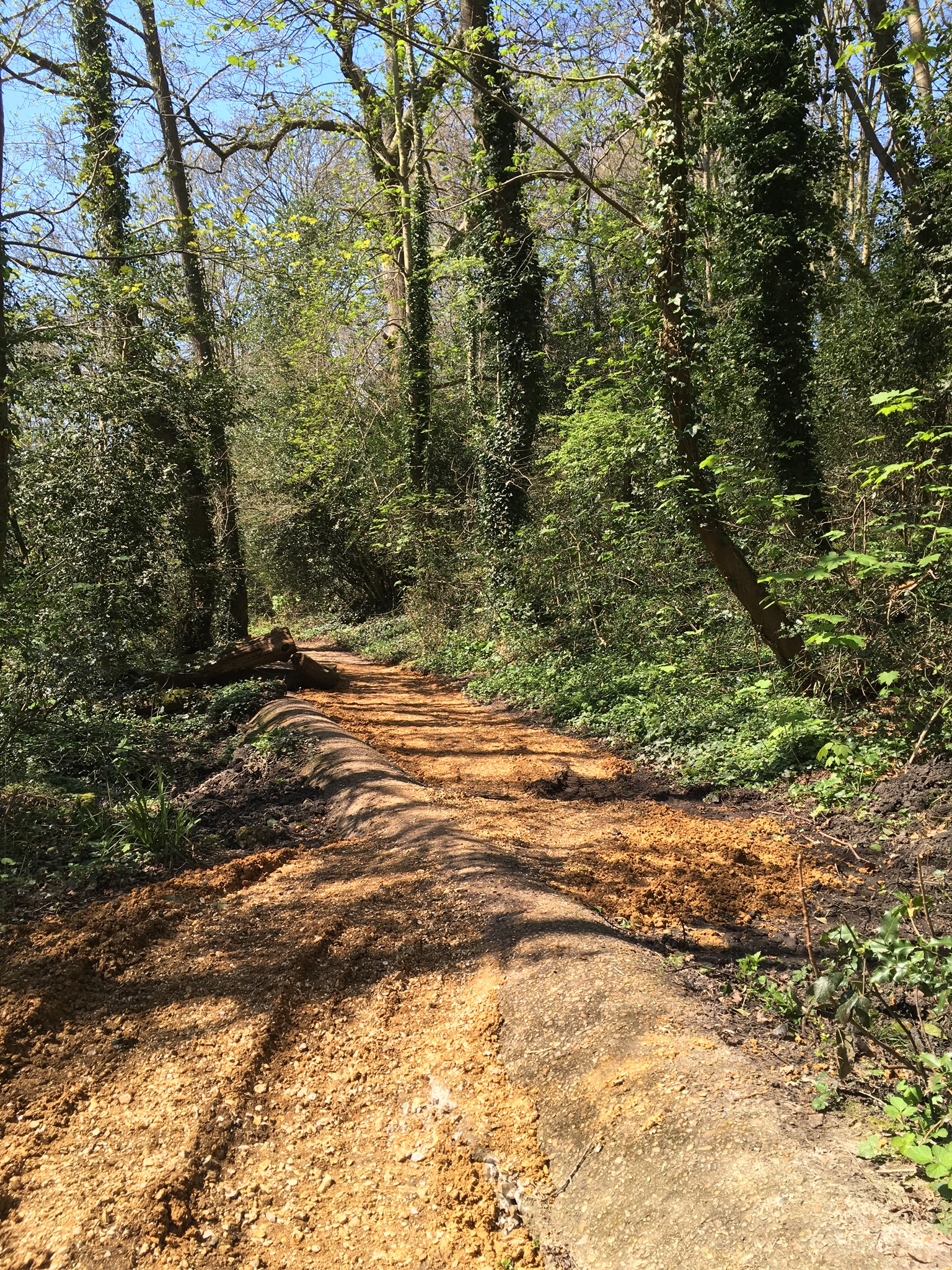 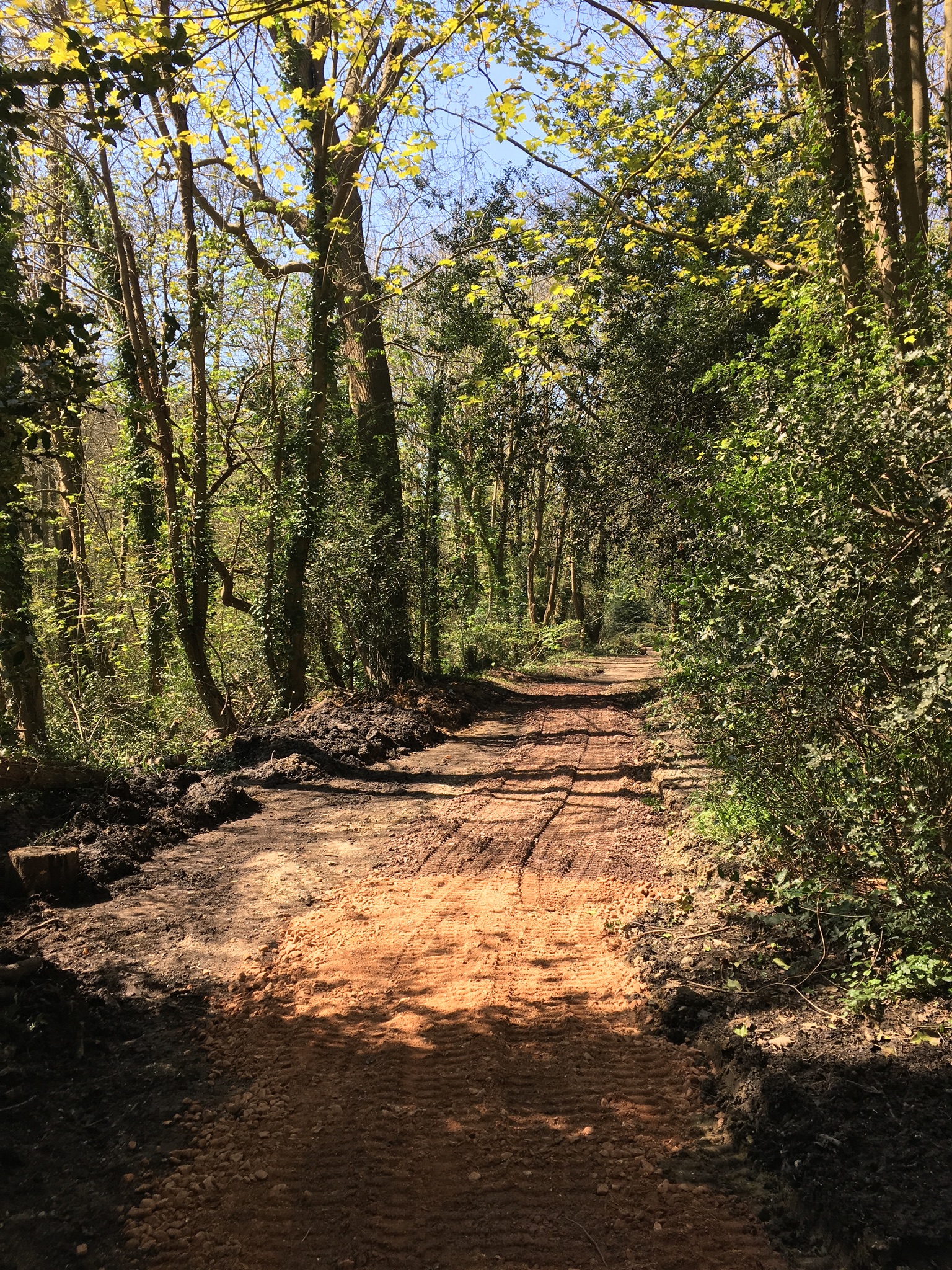 Our luck ran out at the very bottom of the valley. Luckily the mud we found wasn’t too deep and we managed to cross it fairly easily. We were now far nearer the end of the trail than the beginning so I crossed my fingers and hoped this was the worst of the mud. If not we had a long walk back to get off the trail. 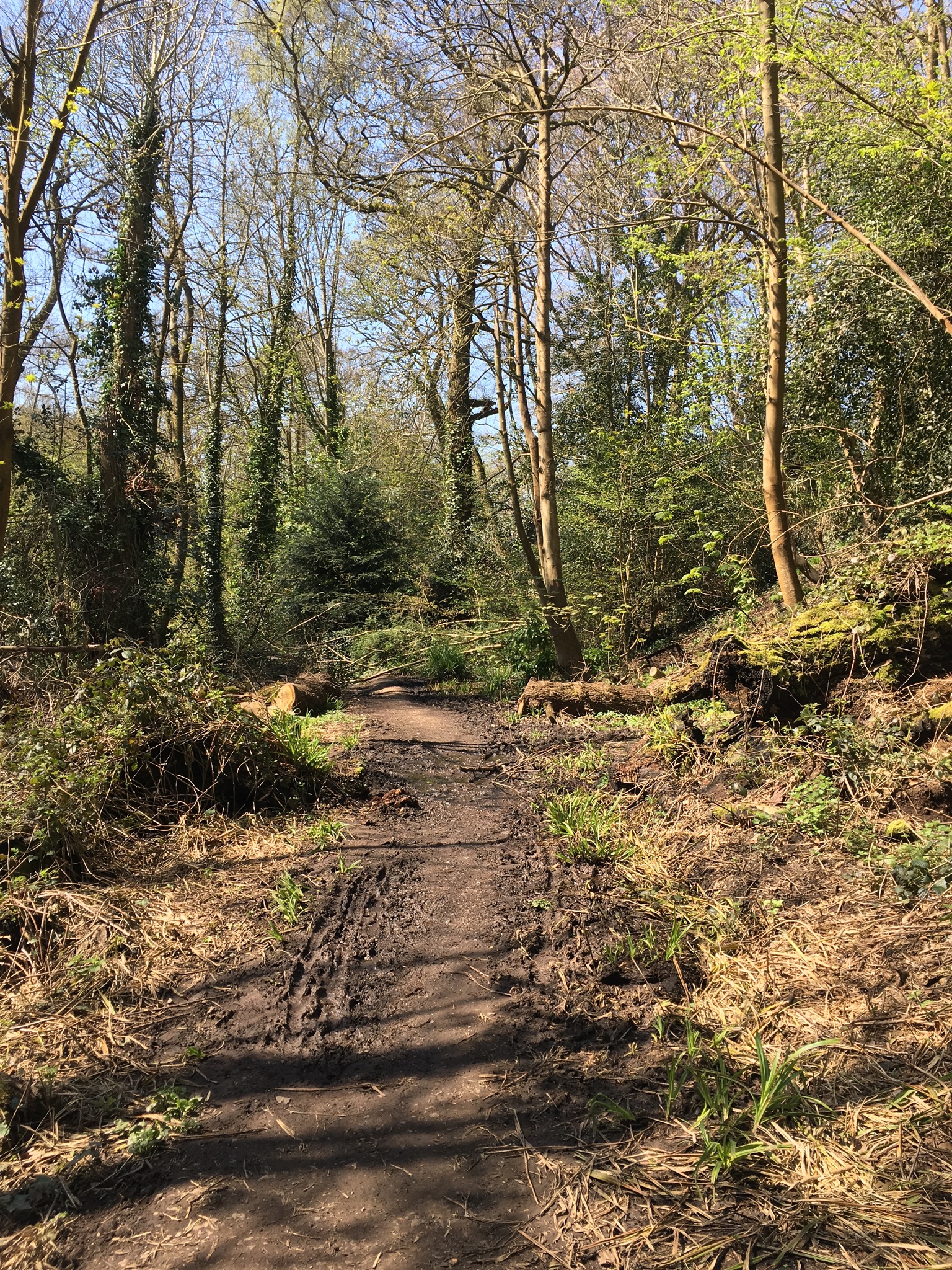 Beyond the mud the path was firm and dry. It looked as if the caterpillar machine might have passed by even if it hadn’t deposited any gravel this far along. When we reached the four trees growing together that always look to me as if they’re dancing I knew Archery Road wasn’t far off. Worryingly, the trunk nearest the trail had been marked with a red number 21. All along the trail we’d see cut logs and I’d assumed they were fallen trees that had been sawn to shore up the trail edges, now I wondered if they weren’t actually clearing the edges of the trail. It would be a terrible shame if these particular trees were marked for cutting, they make such a lovely landmark. 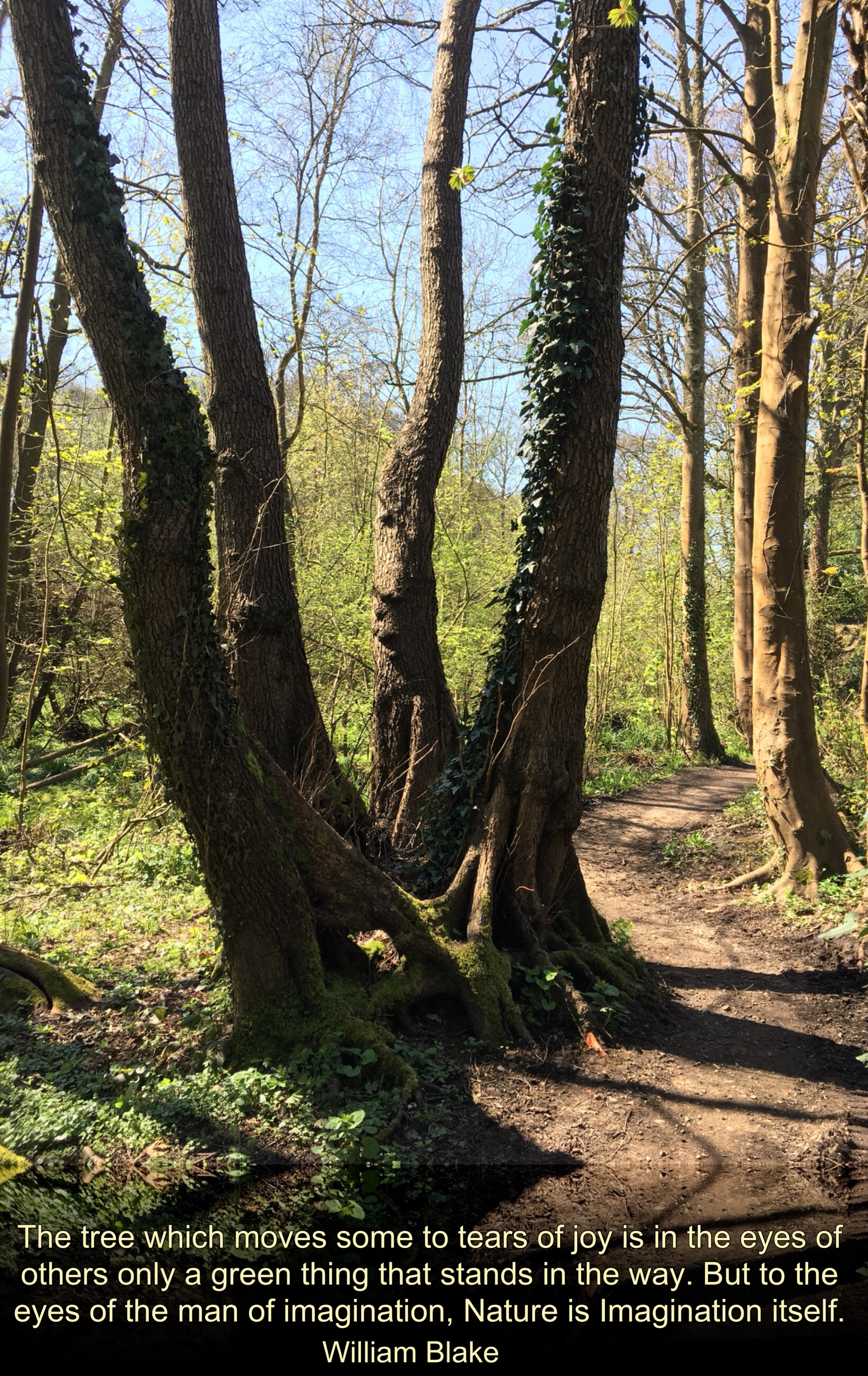 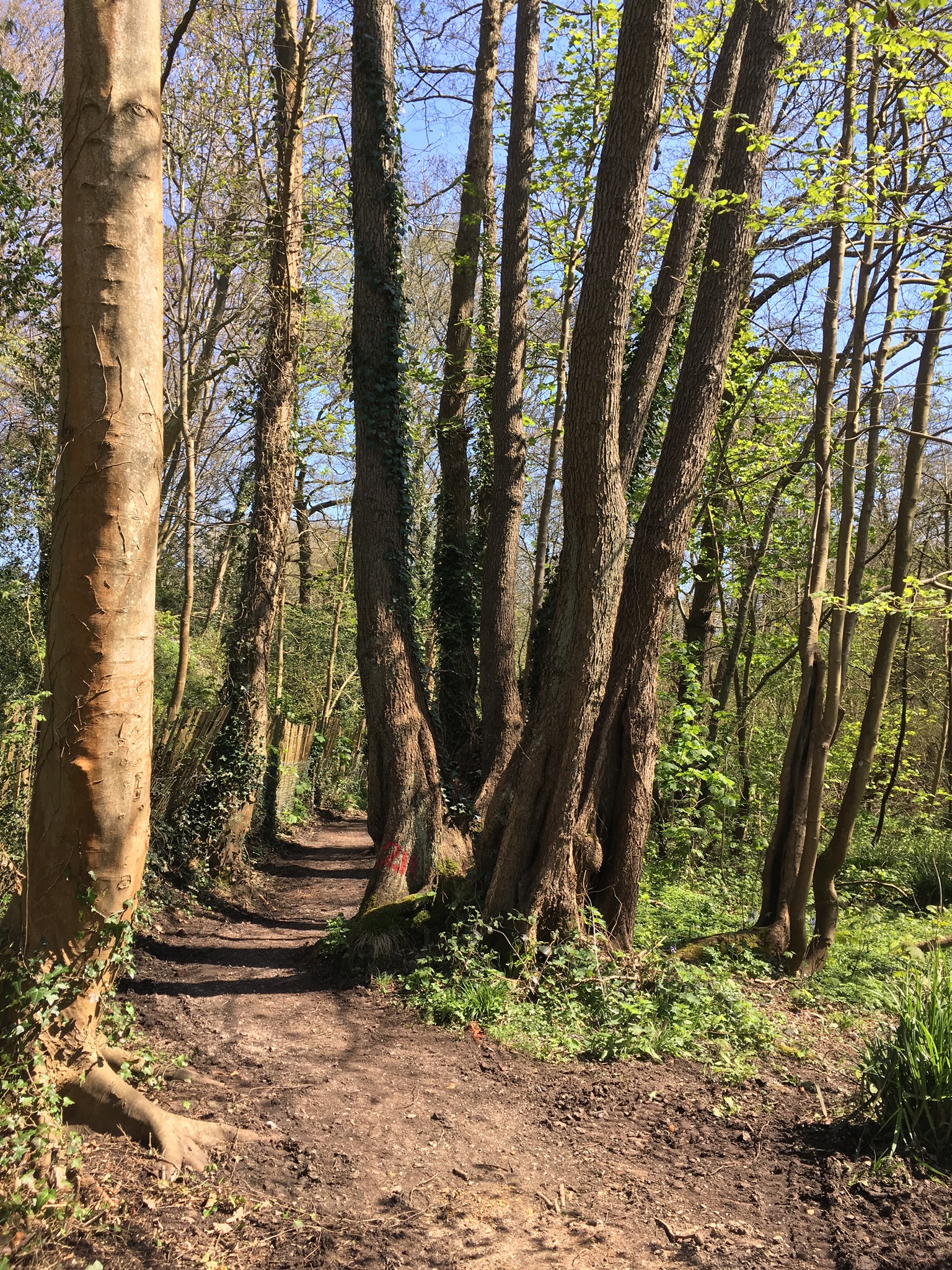 Just beyond the dancing trees the trail turns left and drops quite steeply towards the stream. The stream margins are boggy and today, scattered amongst the sedges were clumps of yellow marsh marigolds. This yellow was echoed in the fresh, yellow green of the new growth on the trees and between them ivy was strung like bunting to welcome the new season. There were wood anemones here too and the first butterfly we’d seen all morning, a small blue, although it didn’t hang around long enough to have its photo taken. 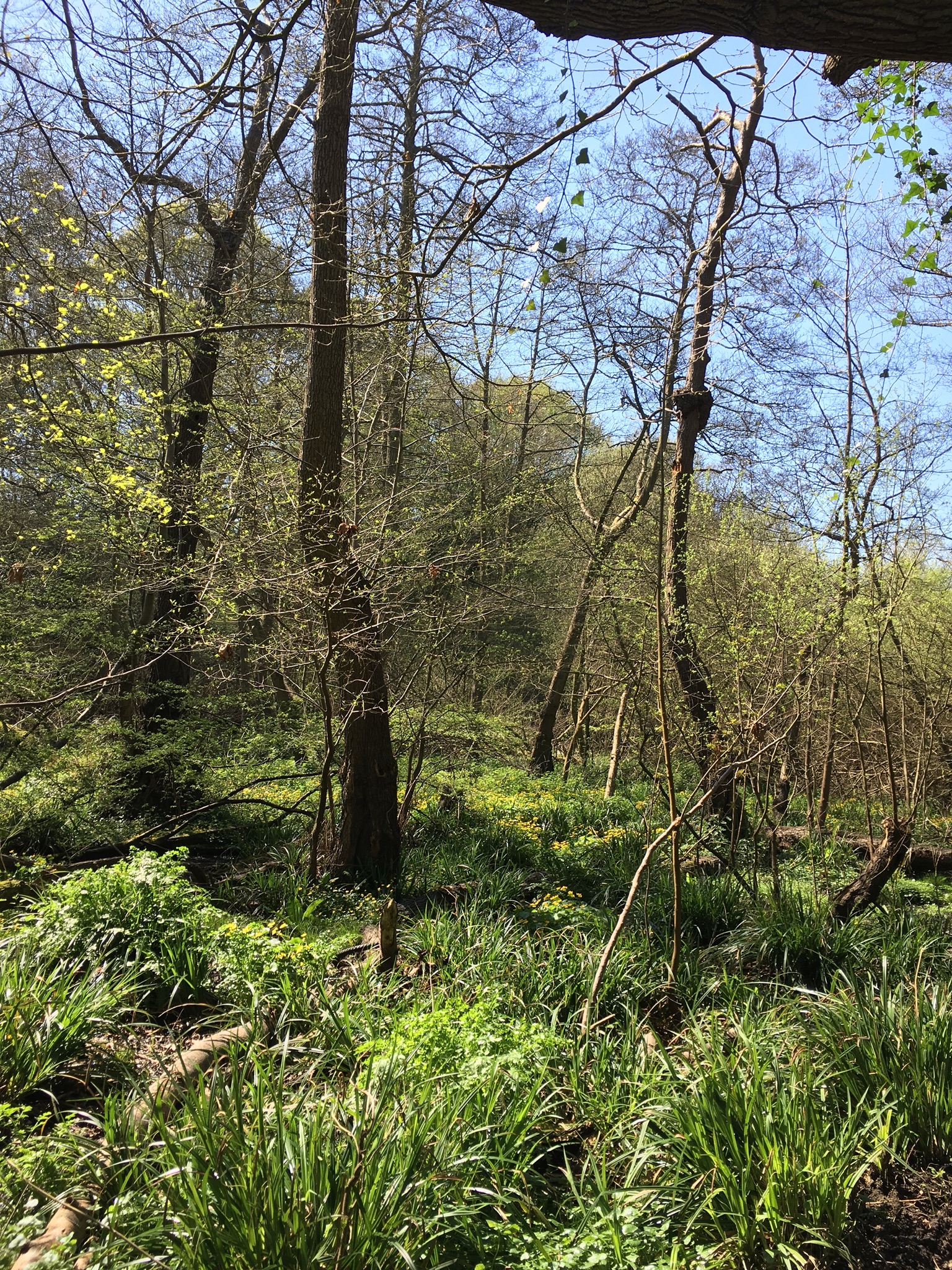 We passed the point where the trail divides, taking the left fork towards the shore rather than the right towards the Archery Ground. Just before the bridge back over the stream we came to another patch of mud. This was wider and gloopier than the last. There was a well trodden trail around it though and we passed by without getting our boots muddy. Even so, when we reached the road we decided not to push our luck and left the trail through Jurds Lake for another day. 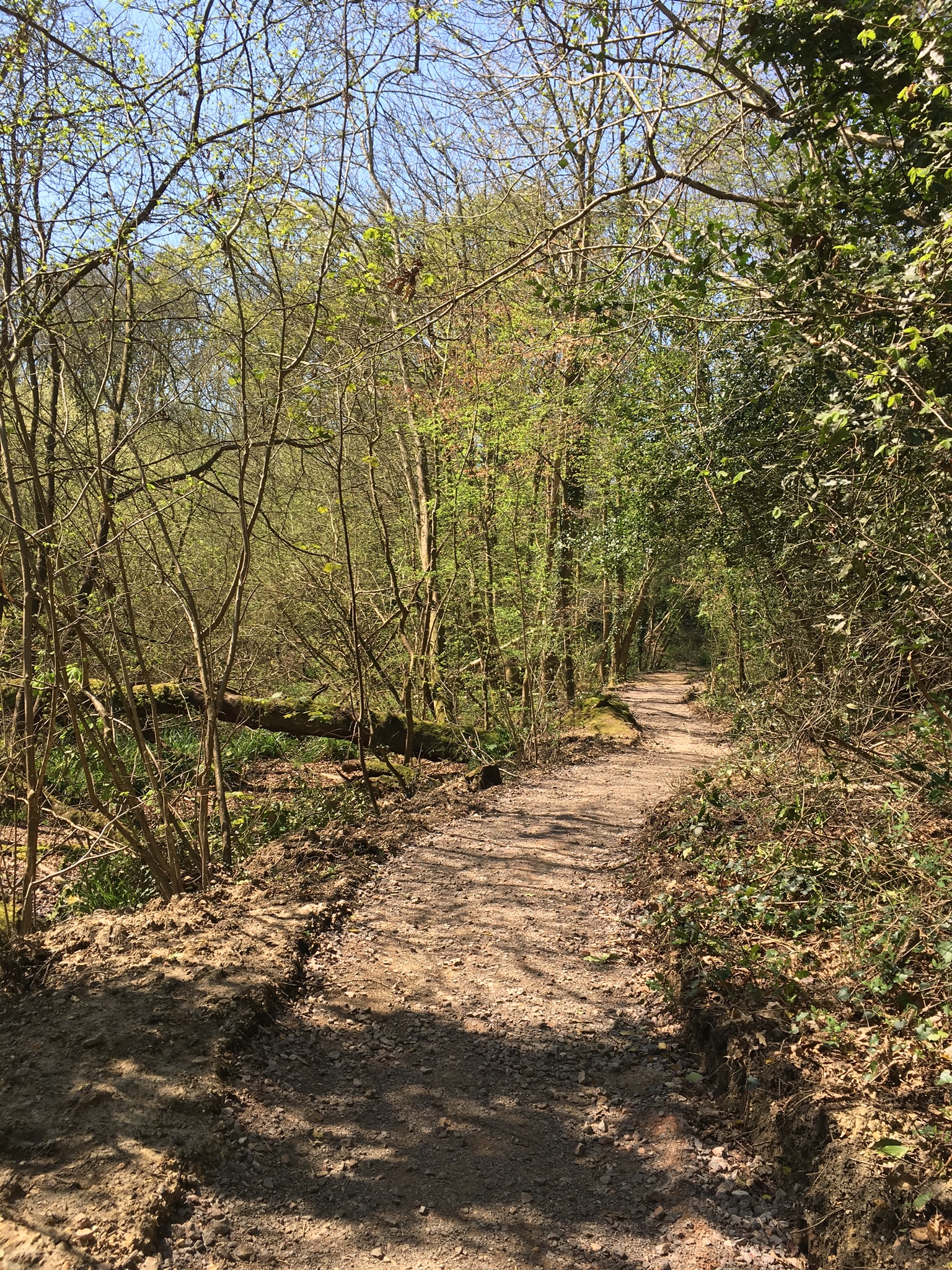 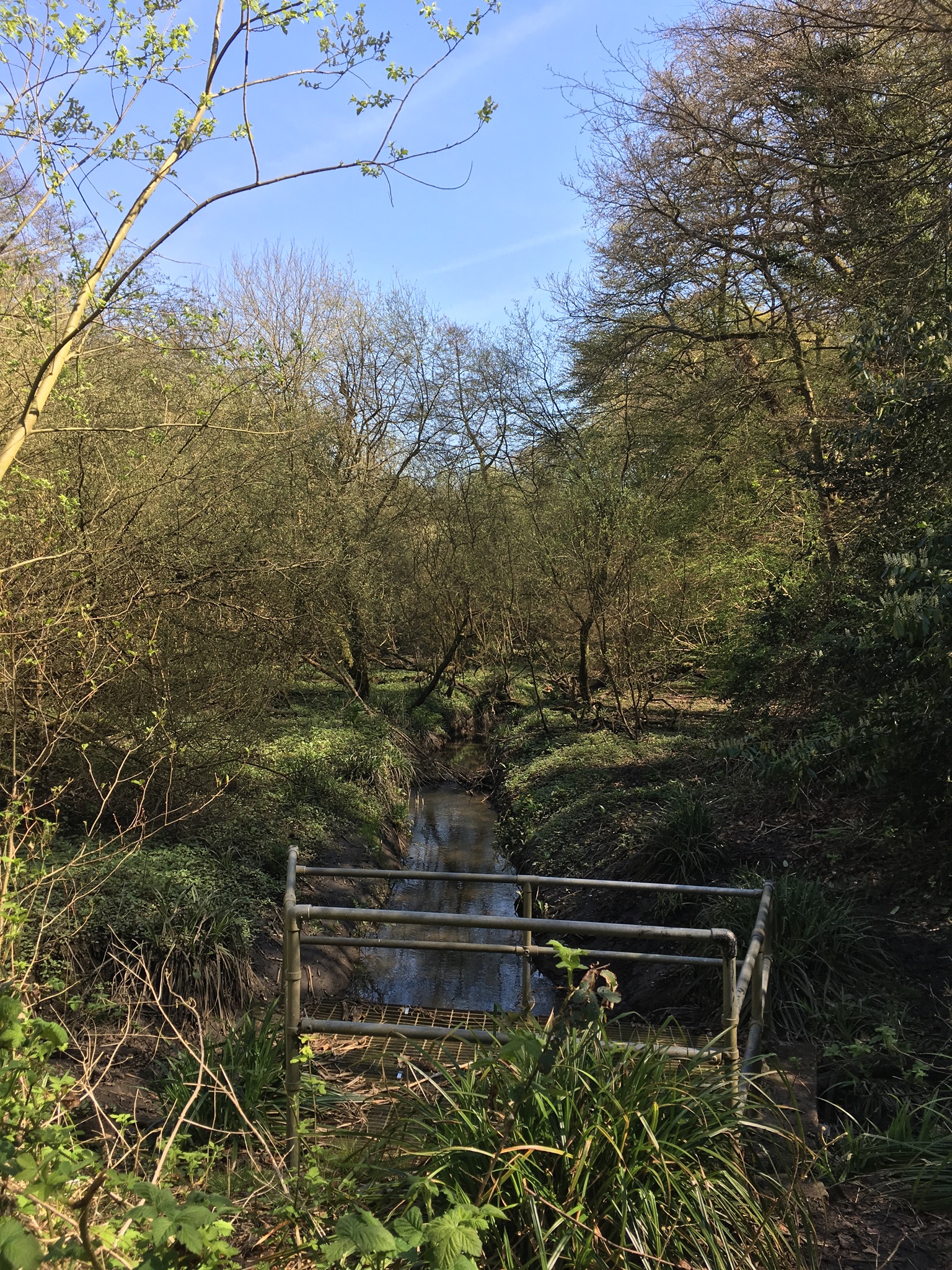 Out of the shade of the trees and away from the cooling water of the stream we were surprised by the heat of the sun but we stuck to the road until we reached the shore. The sky was blue, the sea was sparkling it was time to stop and enjoy the ice cream weather in traditional fashion. 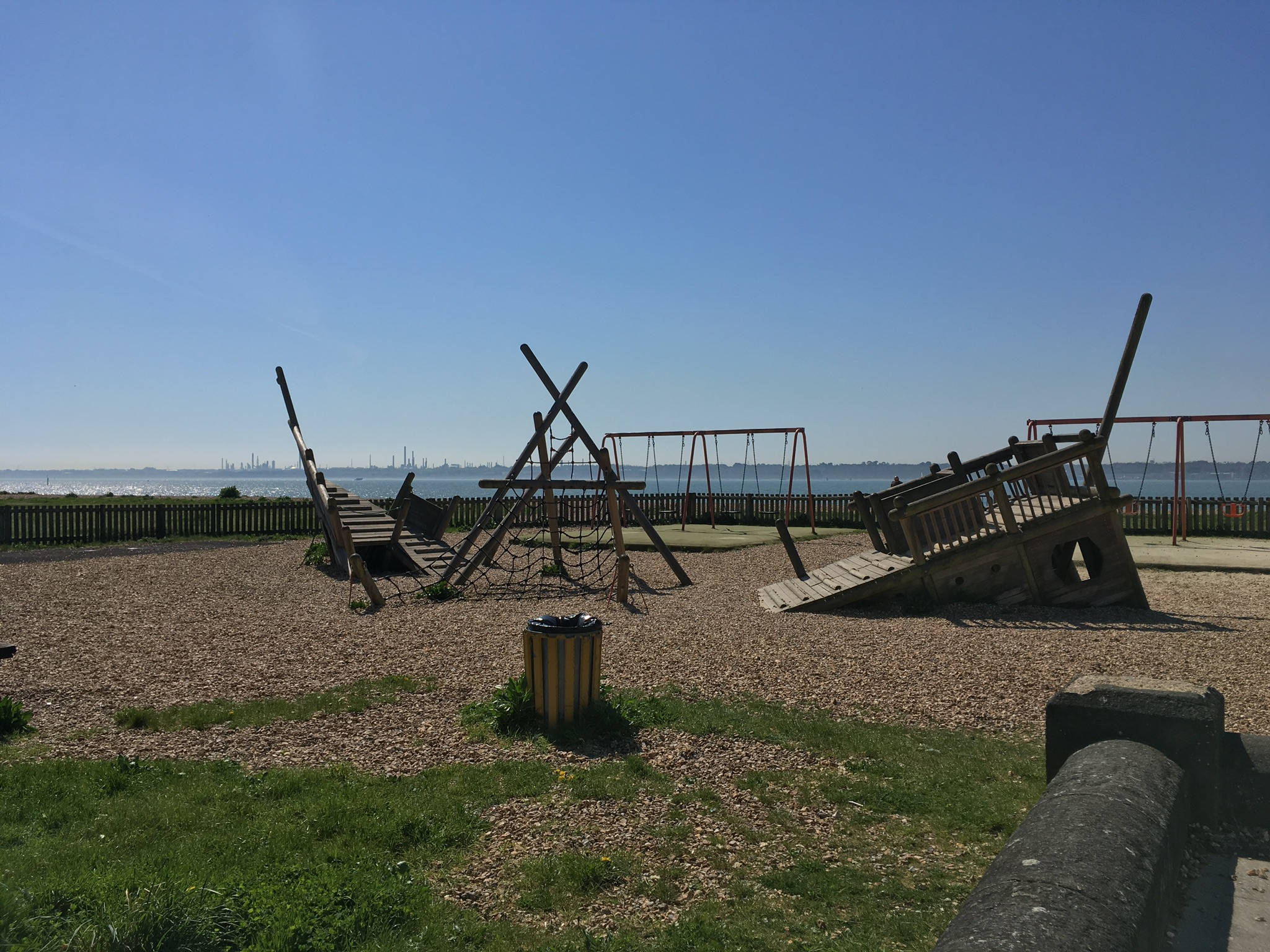 2 thoughts on “Big changes on the butterfly walk”