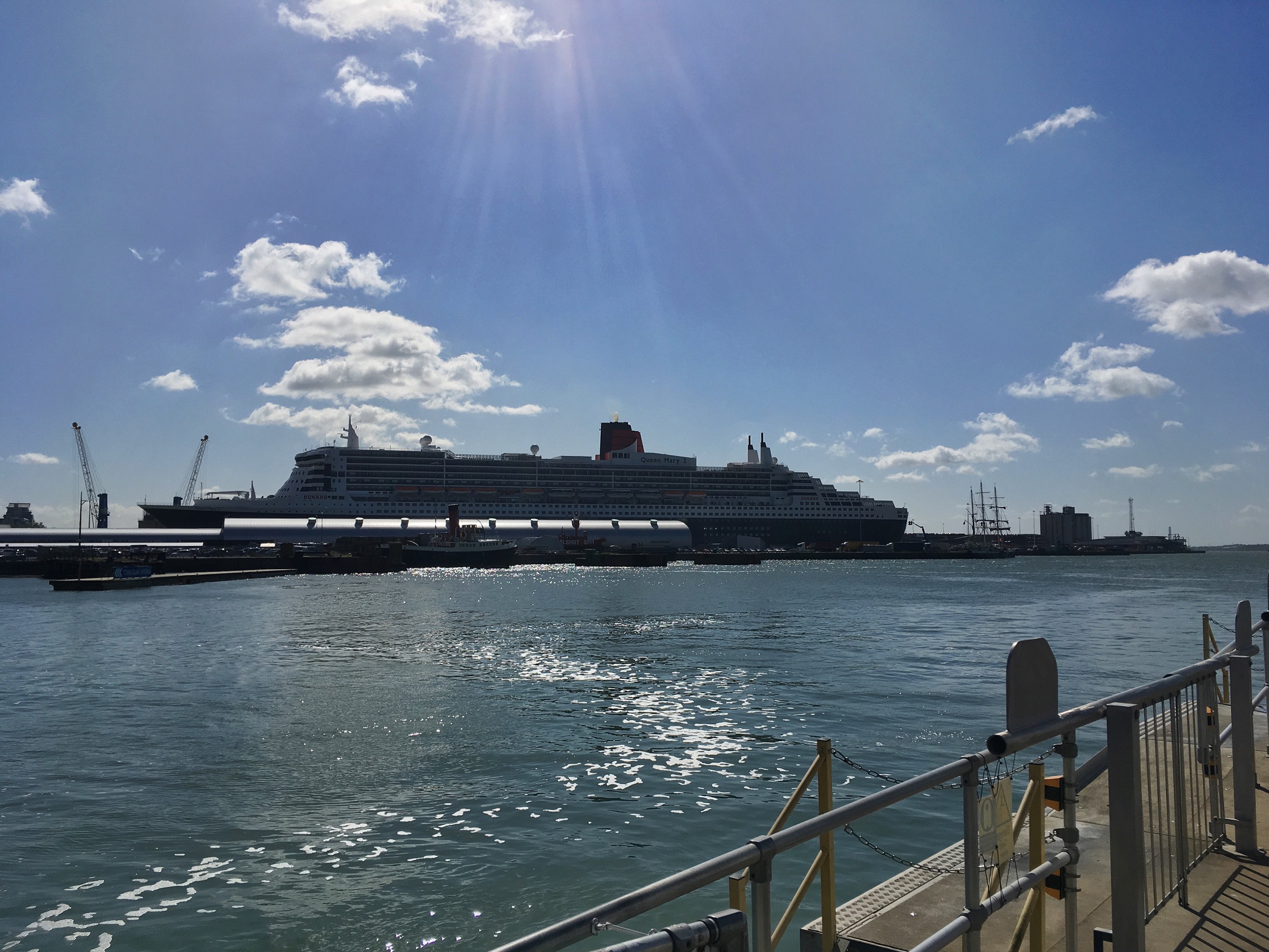 CJ suffers with terrible sea sickness. We discovered this on many trips across the English Channel to Cherbourg when he was a small child. At first I’d spend the whole journey in the ladies watching him throw up. Then, thankfully, he got too old for the ladies so Commando had to deal with the puking. We tried every anti sea sickness product under the sun. They didn’t work. Not one of them. Not even a little bit.  Despite this, today, he and I were going on a cruise. It would be a very short cruise. Hopefully it would be too short for any actual vomiting to commence.

OK, so the photograph of the big cruise ship above is slightly misleading, although we did pass it as we set off across Southampton Water. Technically, our trip was more of a ferry crossing than a cruise, but the sky and sea were blue and we were crossing the water in a boat so the whole thing had a holiday feel to it. Maybe not for CJ though. He looked a little worried at the prospect of being on the water no matter what size the vessel was. 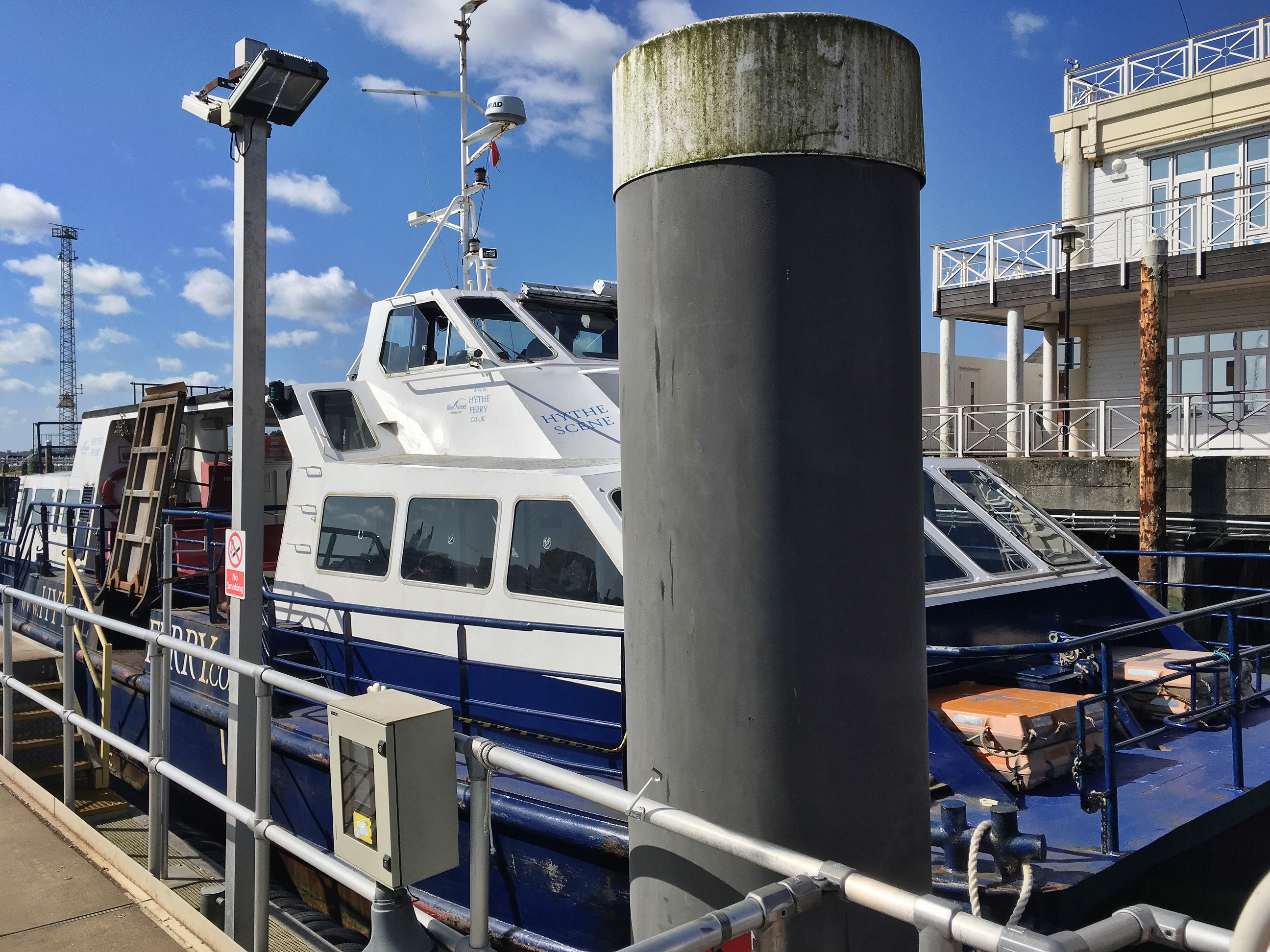 Last autumn I made a grand plan to visit Hythe. There was  proper research, downloaded maps, even some FGO Stuart photos and a lot of historical facts. It all went pear shaped because of the winter ferry timetable. We hadn’t even realised there was such a thing. CJ looked relieved if anything. Today we tried again. This time I was armed with all the relevant times and we left home extra early. We arrived at the ferry terminal with five minutes to spare. Just enough time to buy a ticket and take a quick photo of the little ferry. It wasn’t a very good photo but you can’t have everything, right?

There has been a ferry between Hythe and Southampton since Saxon times. Hythe was actually named after the Anglo Saxon word Hithe, meaning a good landing place for boats. Originally passengers travelled on sailing boats called wherries or sometimes in row boats. In 1830 the first steam vessels were introduced and, in 1889, the Percy family took over the running of the ferries. They were descendants of  Sir Henry Percy, a late medieval nobleman known as Sir Harry Hotspur and immortalised by William Shakespeare. In his honour they named many of the ferry boats Hotspur. 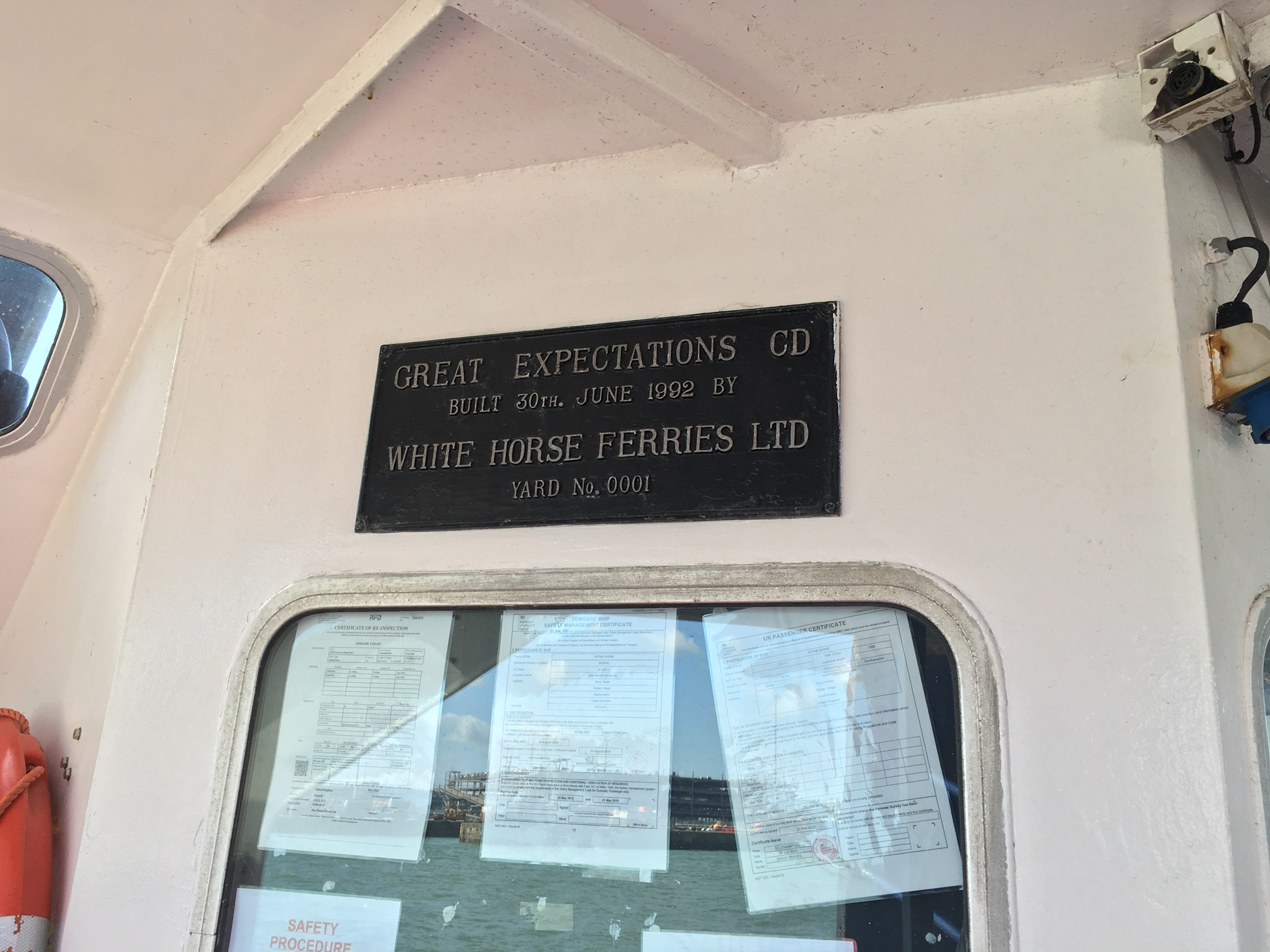 Our boat today was Hythe Scene, originally called Great Expectations and once used on the White Horse Ferries service from Tilbury to Gravesend. White Horse Ferries took over the running of the ferries in 1990 but, in 2016, the service ran into financial difficulties and it seemed doomed to closure. This would have been a disaster for the people of Hythe, who’d have faced a long and congested journey by road to Southampton. Thankfully, in 2017, Blue Funnel stepped in and are currently running the ferries. 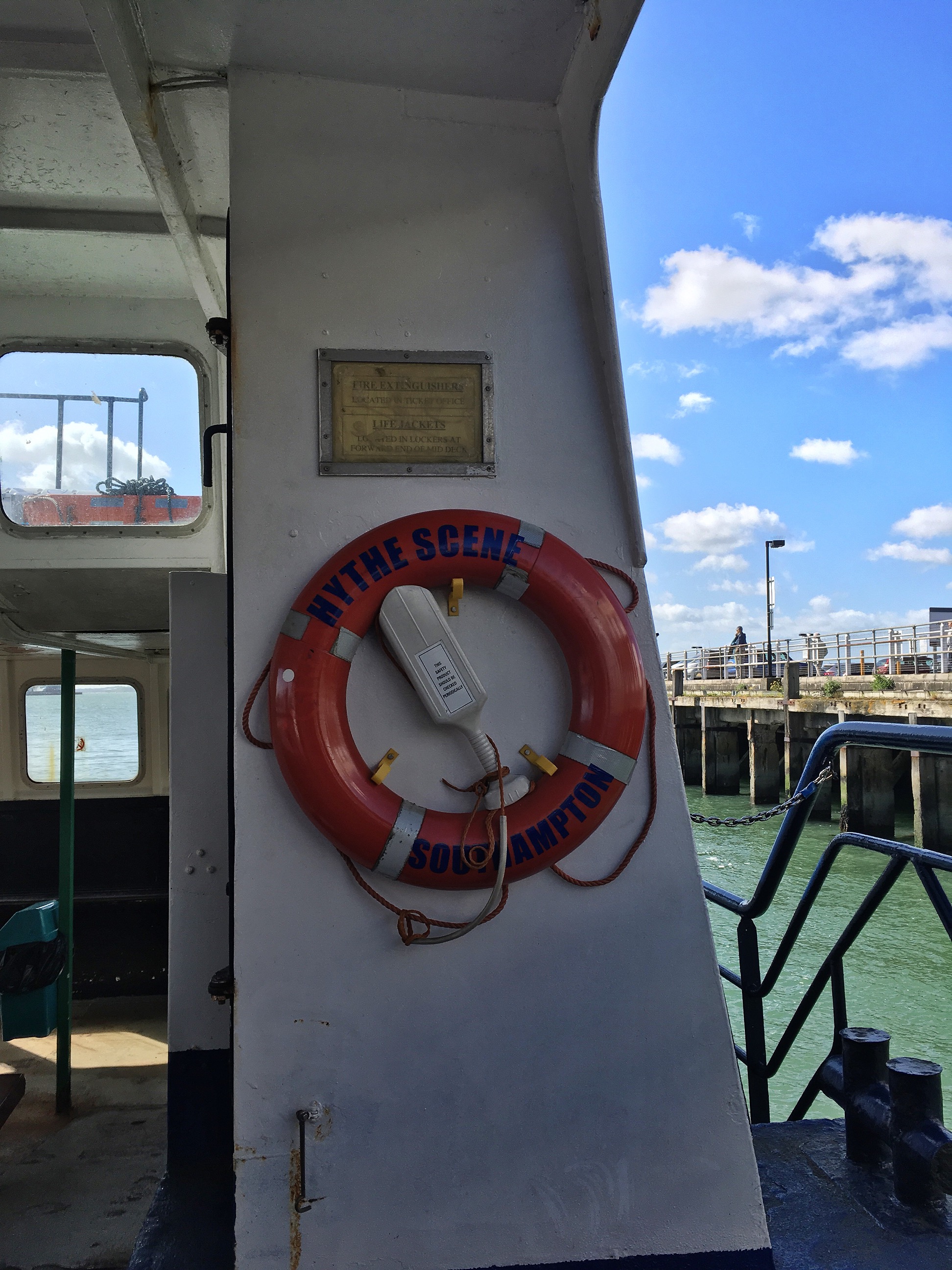 The water looked very calm. This was a good thing but I still had a niggling worry about CJ being sick. When we began to move I tried hard to distract him by pointing out all the city landmarks we could see. There was the spire of St Michael’s  Church, the flats where Southampton Castle used to be, the Town Quay clock tower, a sliver of God’s House Tower, the spire of St Mary’s Church and even my old office building, Dukes Keep. Then there were all the boats and ships in the port, including a sailing ship and Queen Mary 2, one of the gigantic cruise ships that go in and out all the time. 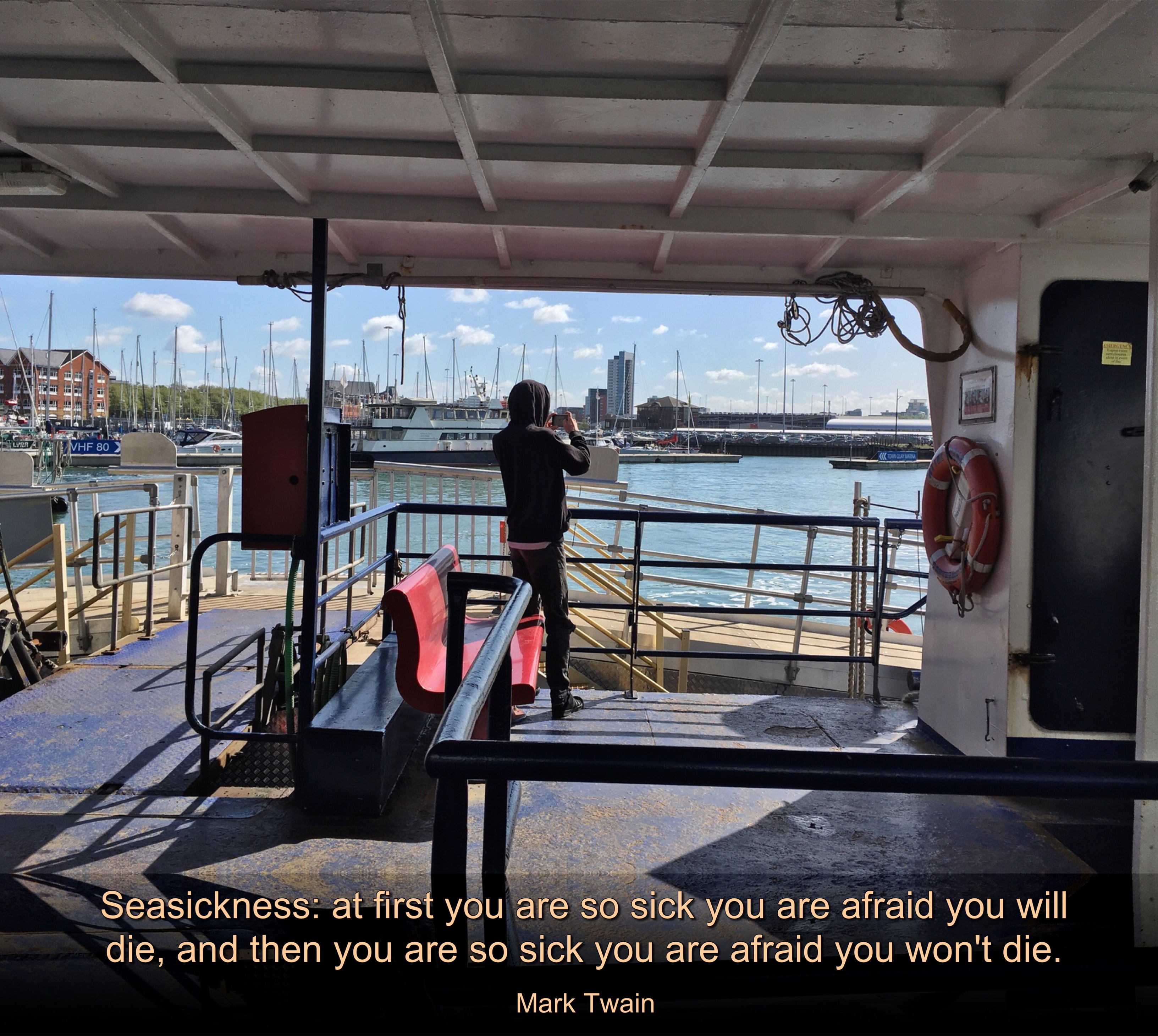 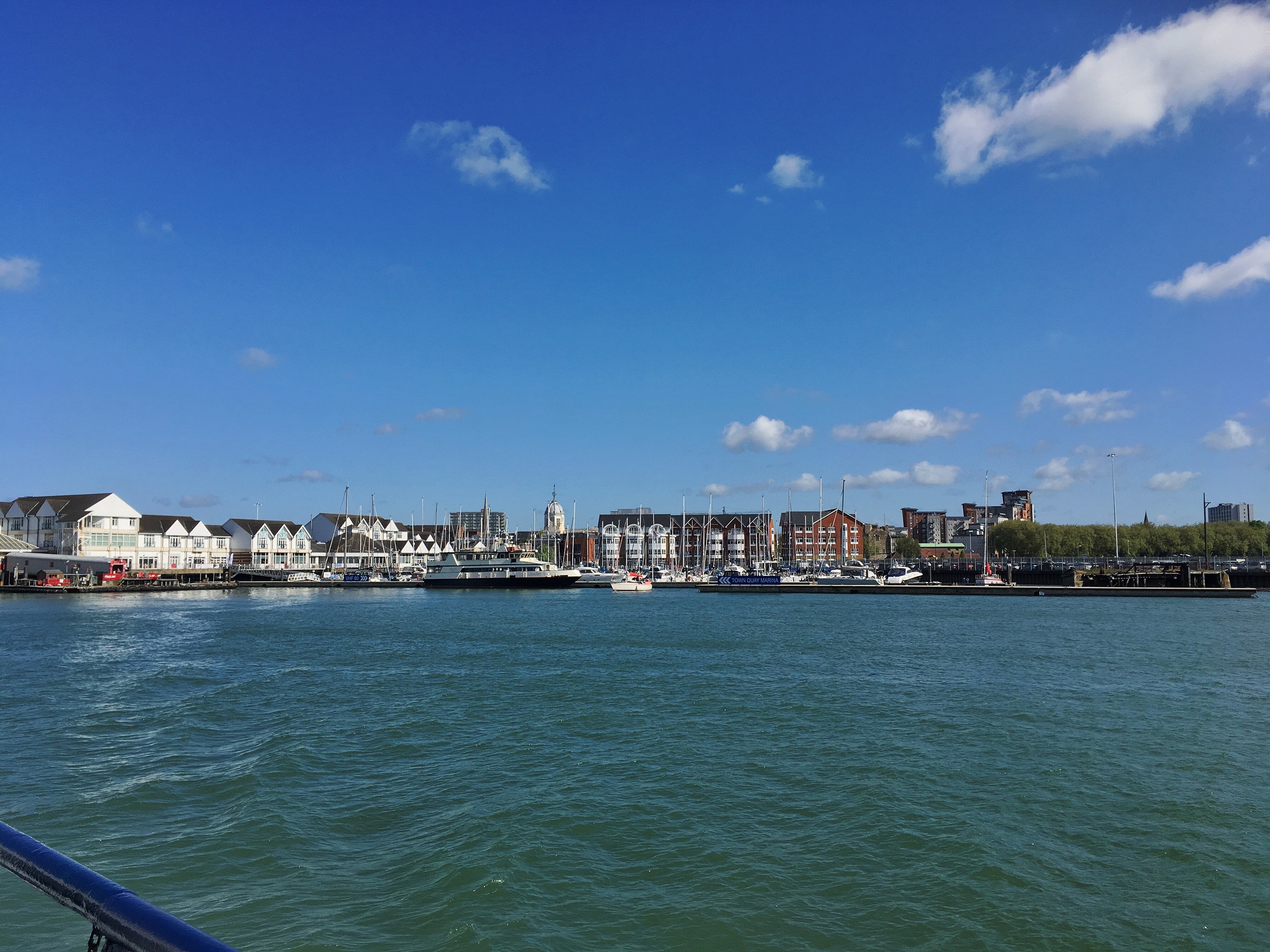 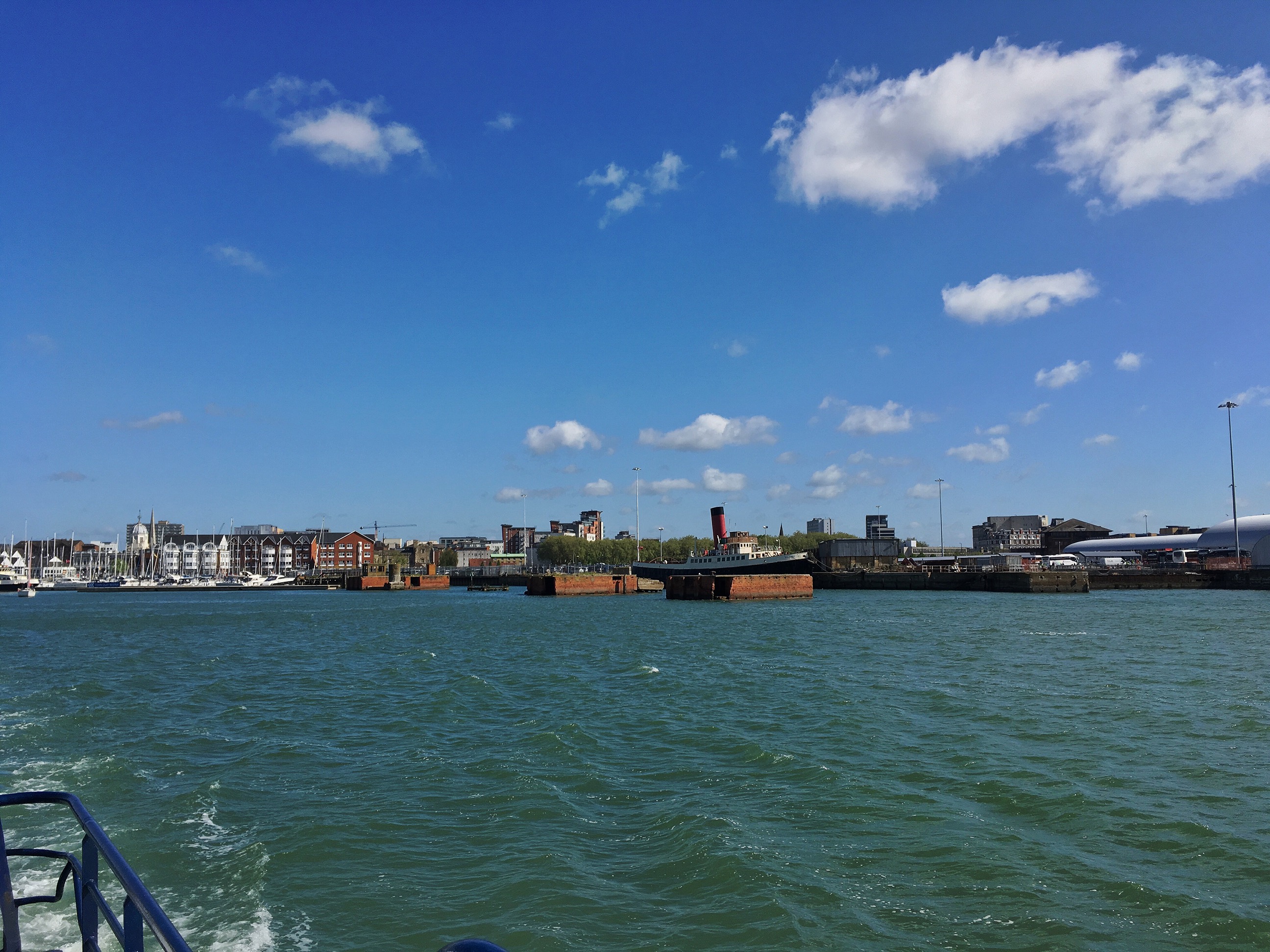 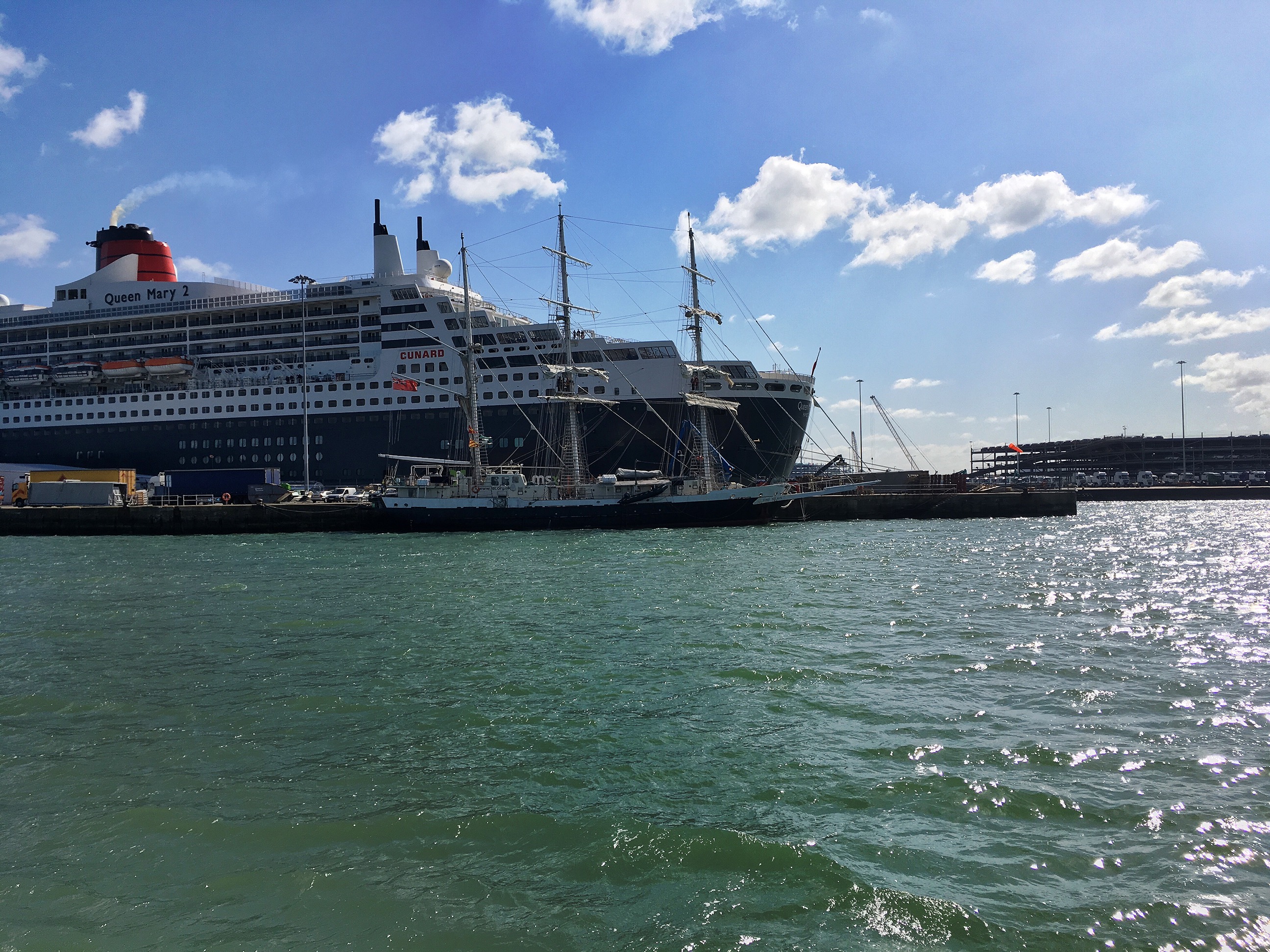 It was a fabulous and interesting view of the city and the salty spray and sparkling sun really did give it the feel of a holiday. Even CJ looked happy and not green about the gills in the slightest. As we moved away from the port we had different views to keep things interesting. On the starboard side we could see the edge of the New Forest, well, the shoreline of Marchwood anyway. To port was the grain terminal we usually see from the opposite side when we walk along Weston Shore. 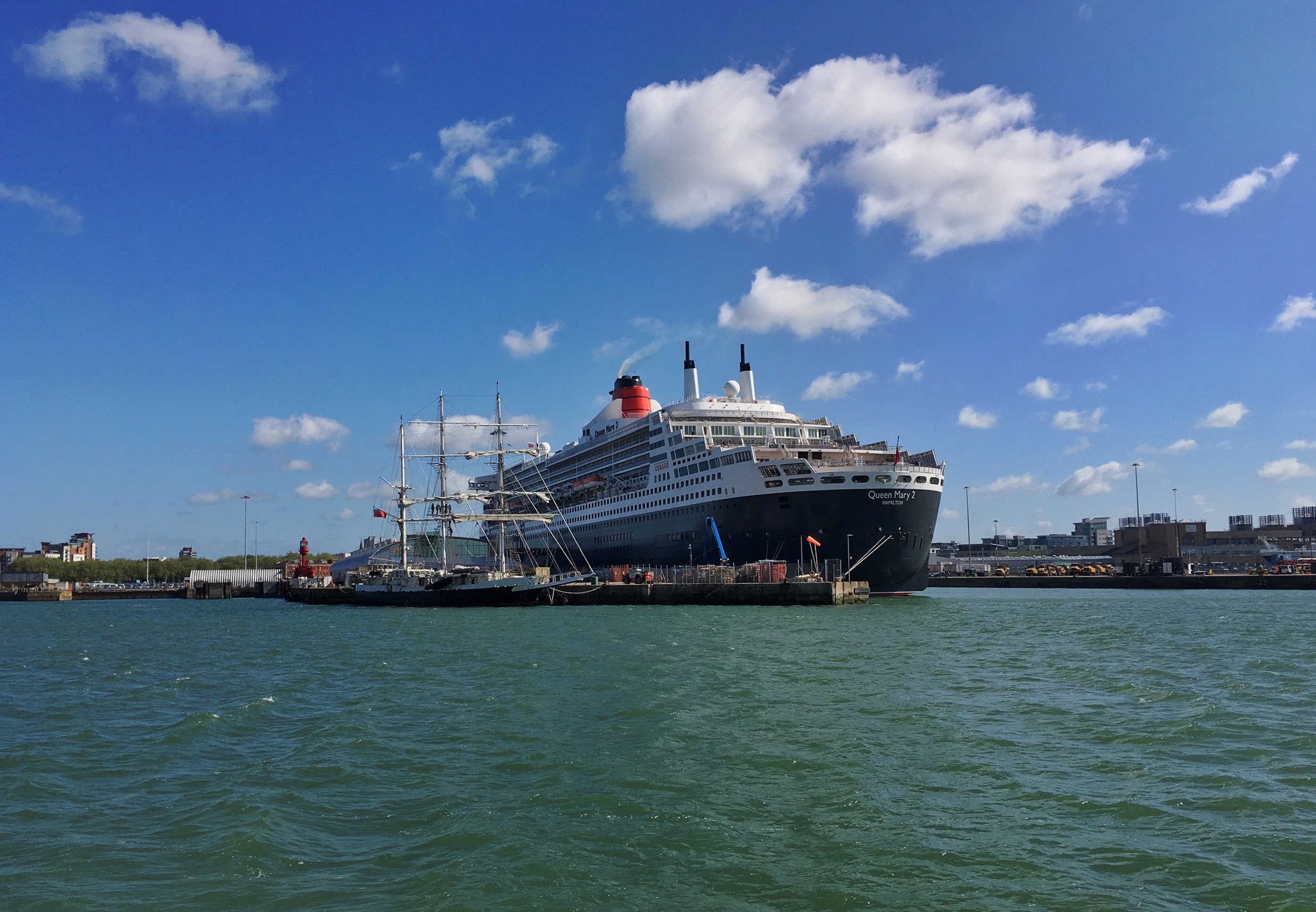 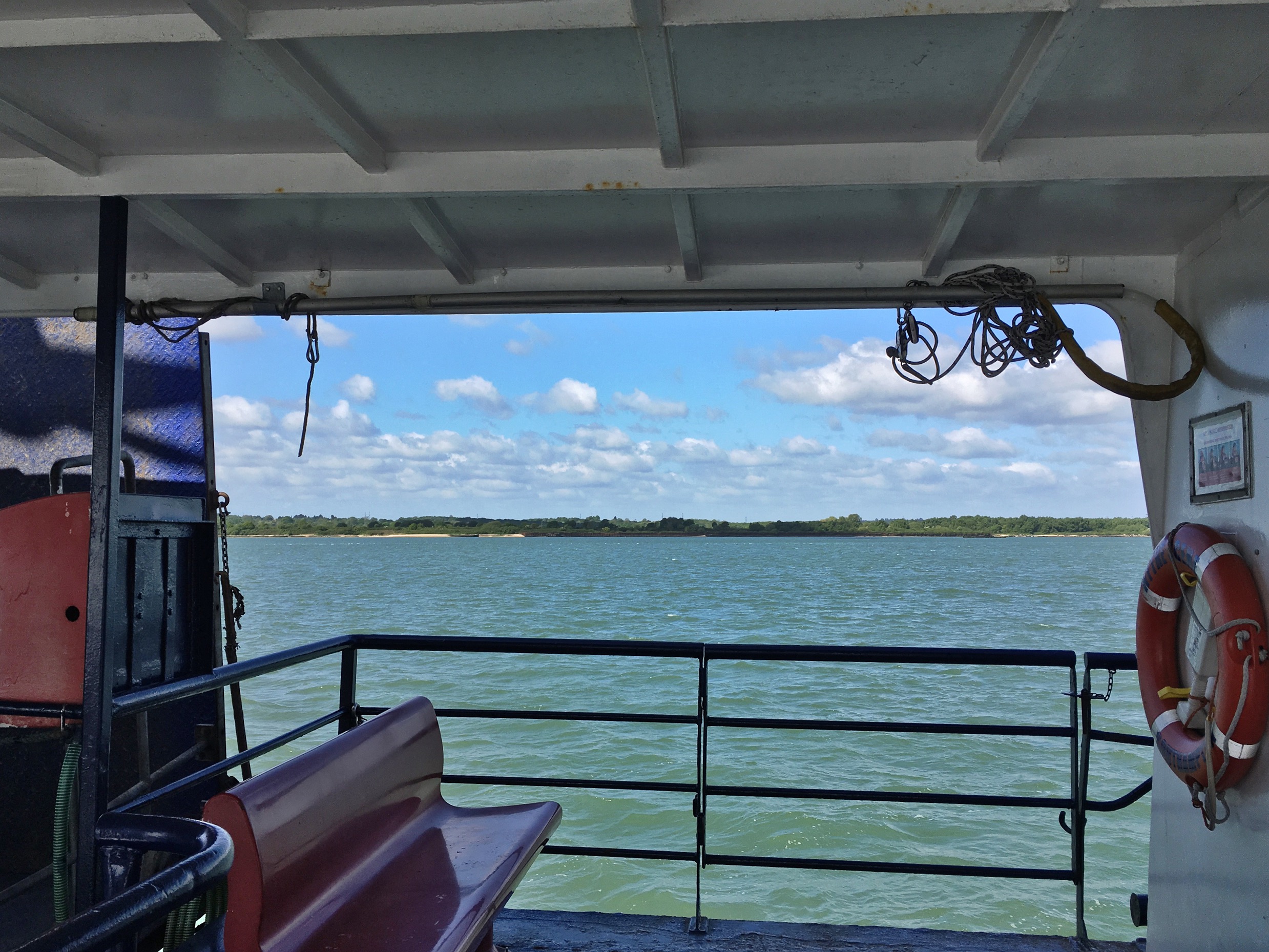 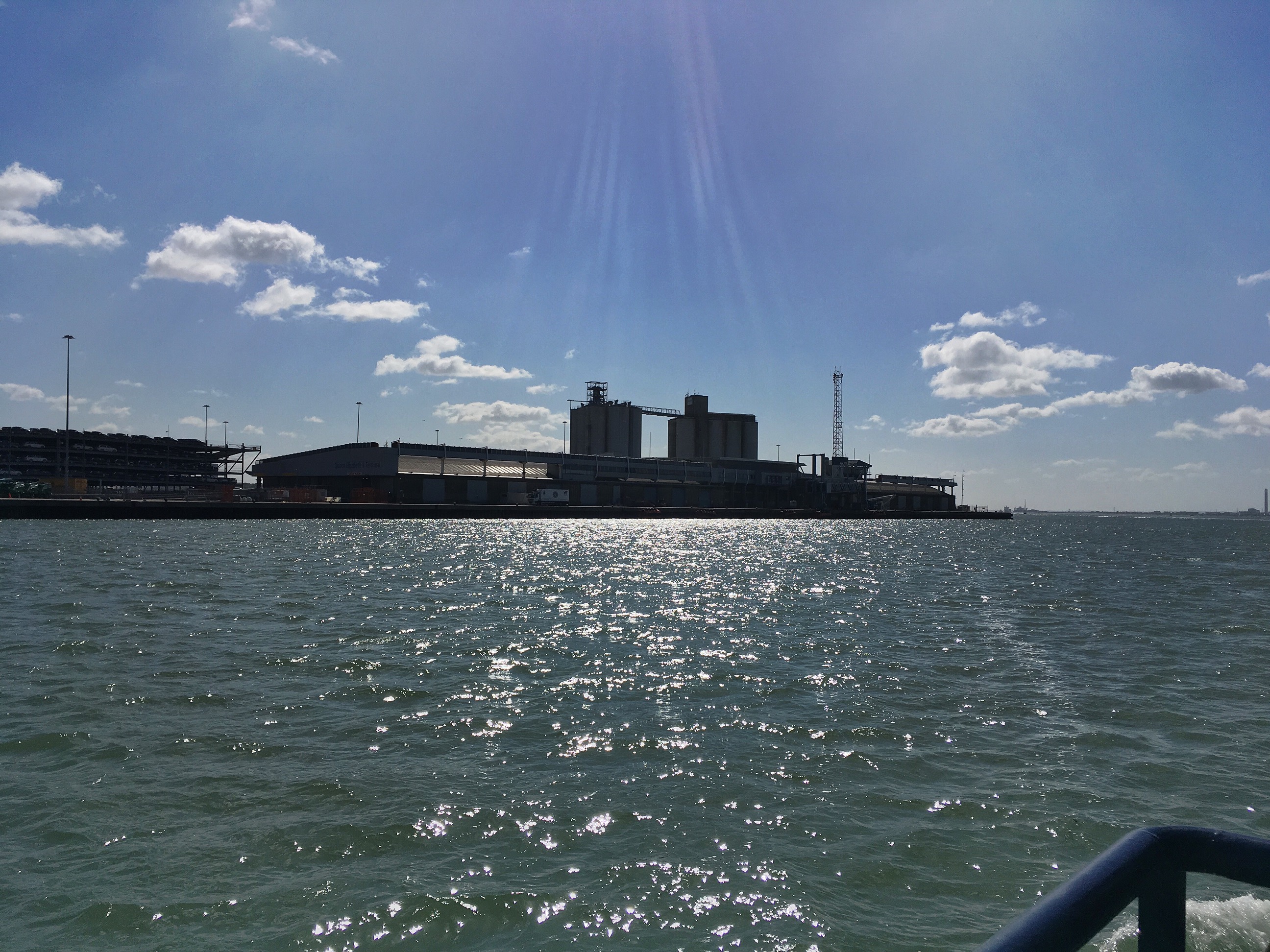 The sky was so blue, the sea such a wonderful turquoise, the sands of Marchwood could have been a tropical island if you squinted and ignored the silver dome of Marchwood Power Station. As we slowly began to pass the grain terminal the Netley shoreline came into view. We could just about make out the dome of the chapel in Victoria Country Park. Now we could see the Hythe Marina on the starboard side but it was the view on the port that held our attention. We were seeing so many of our walking routes laid out in a row, the flats on Weston Shore, the green line of Westwood, Abbey Hill and Netley, all the way to Hamble point where the Big Gun is. 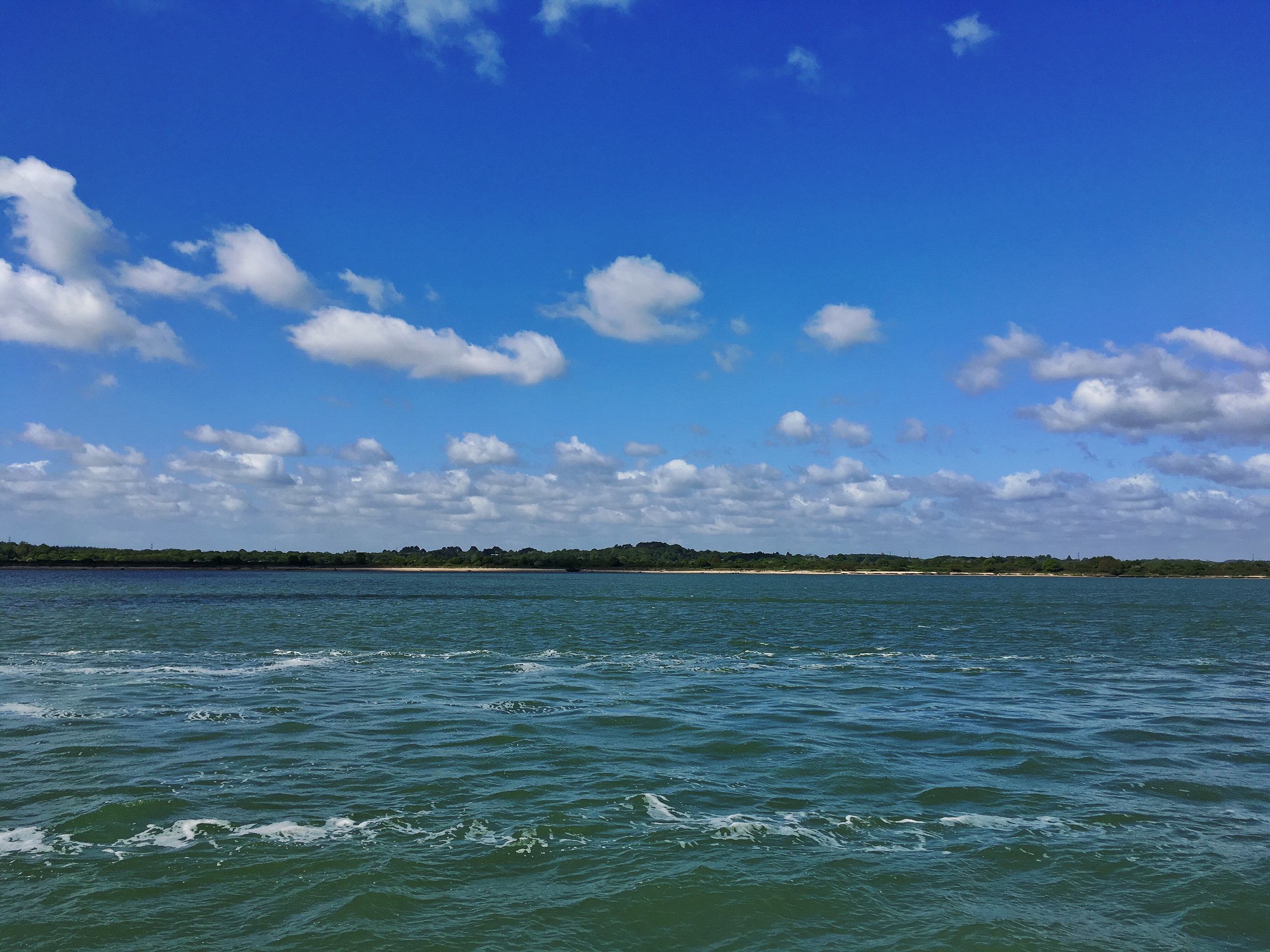 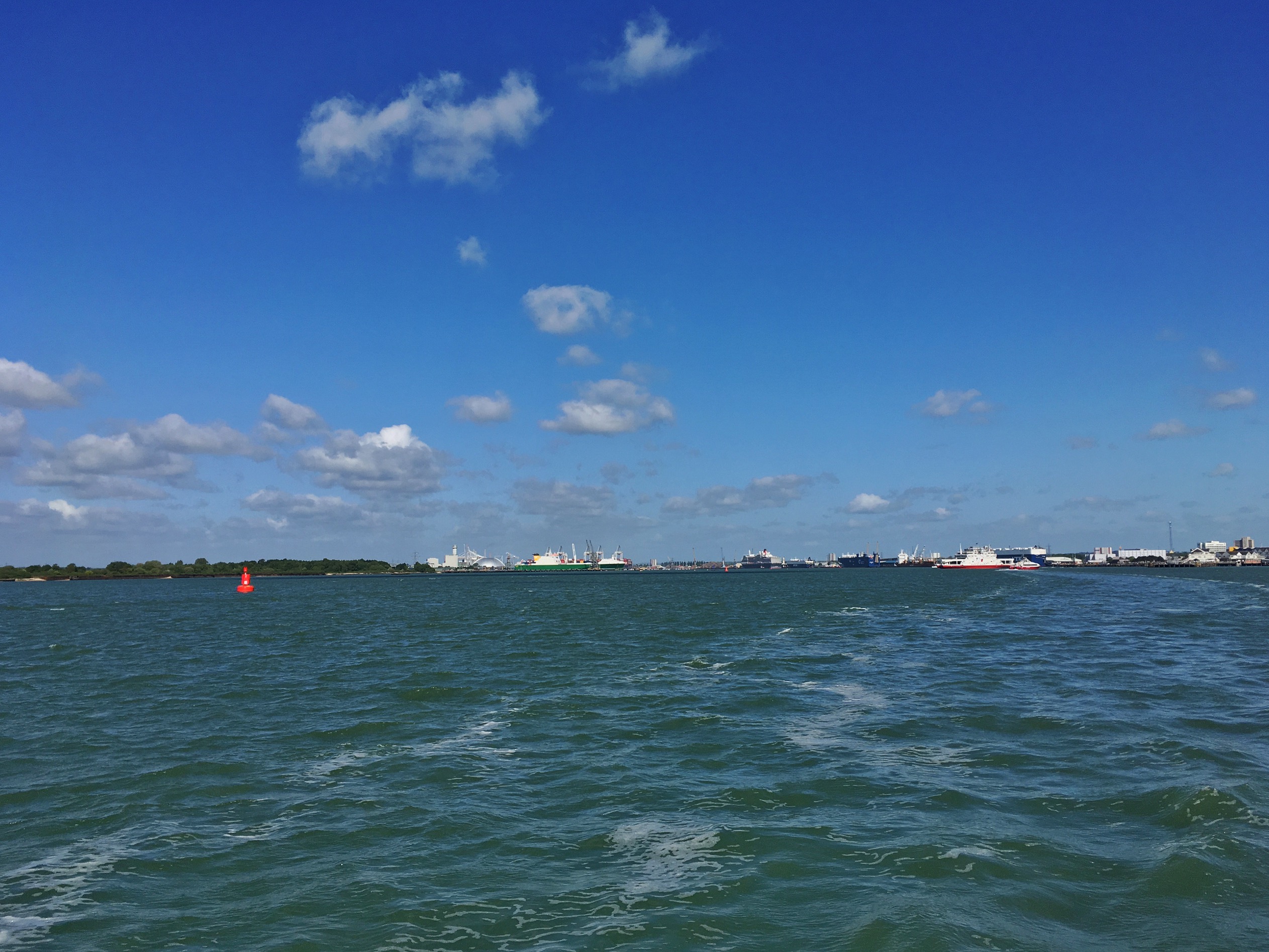 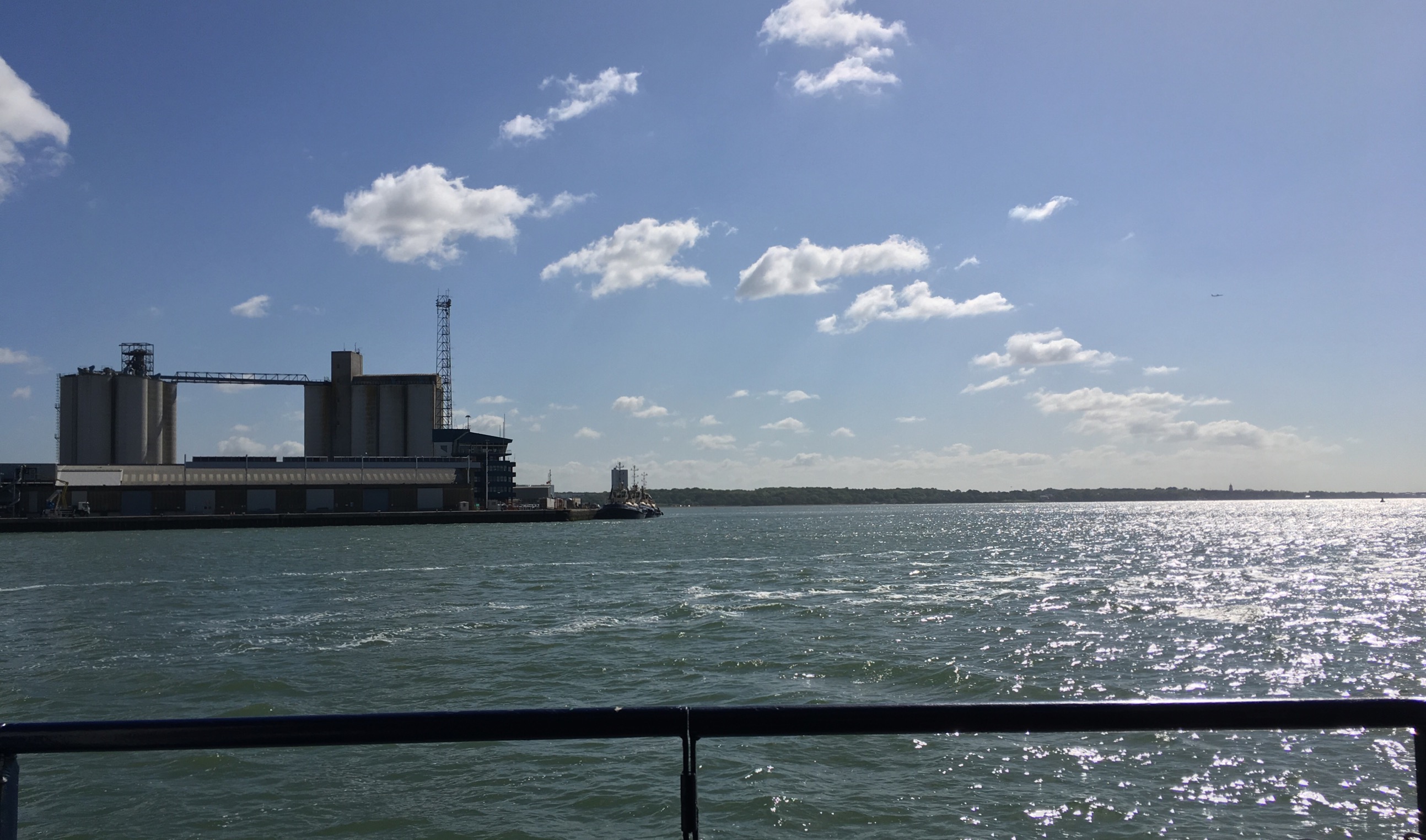 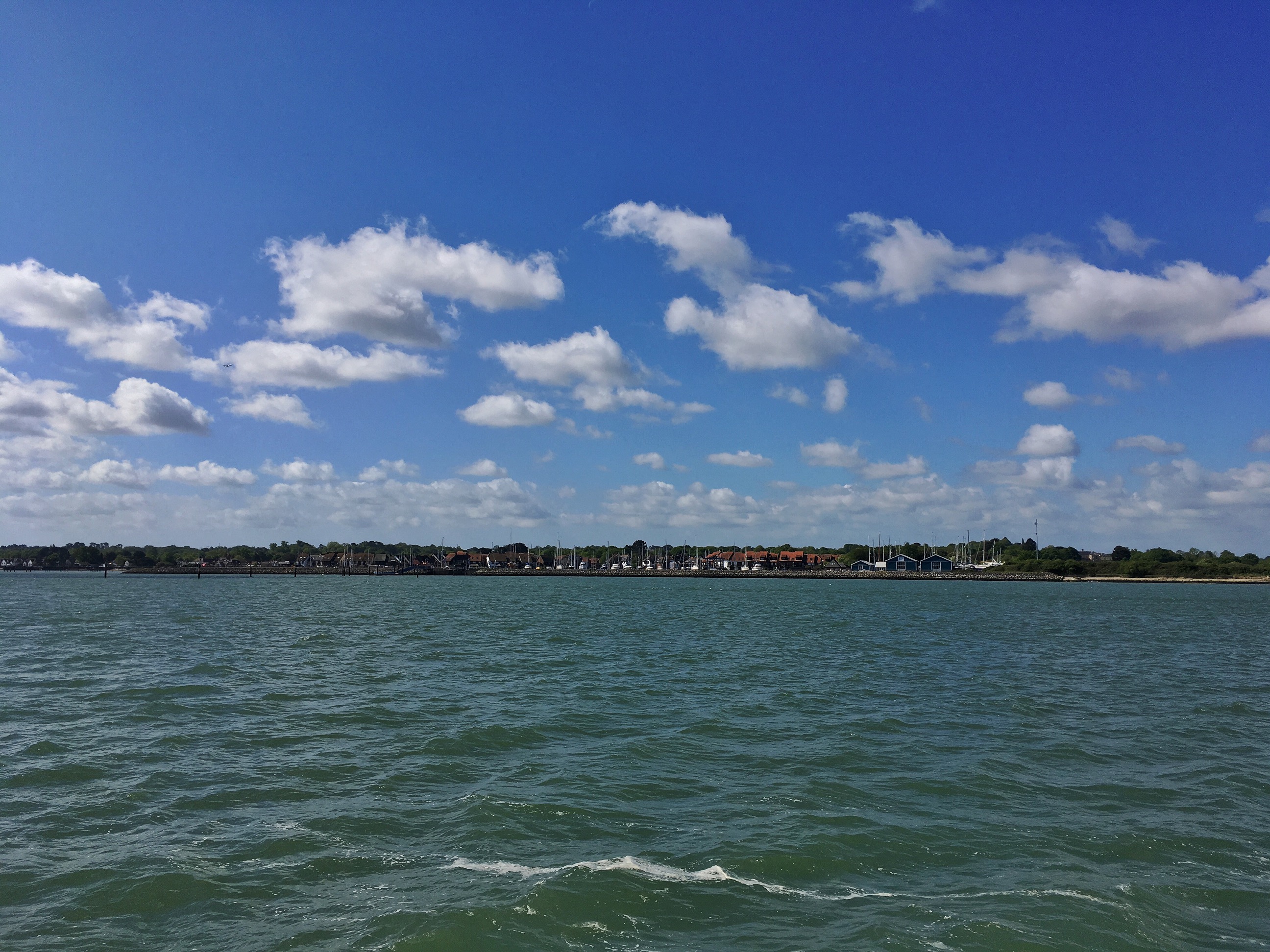 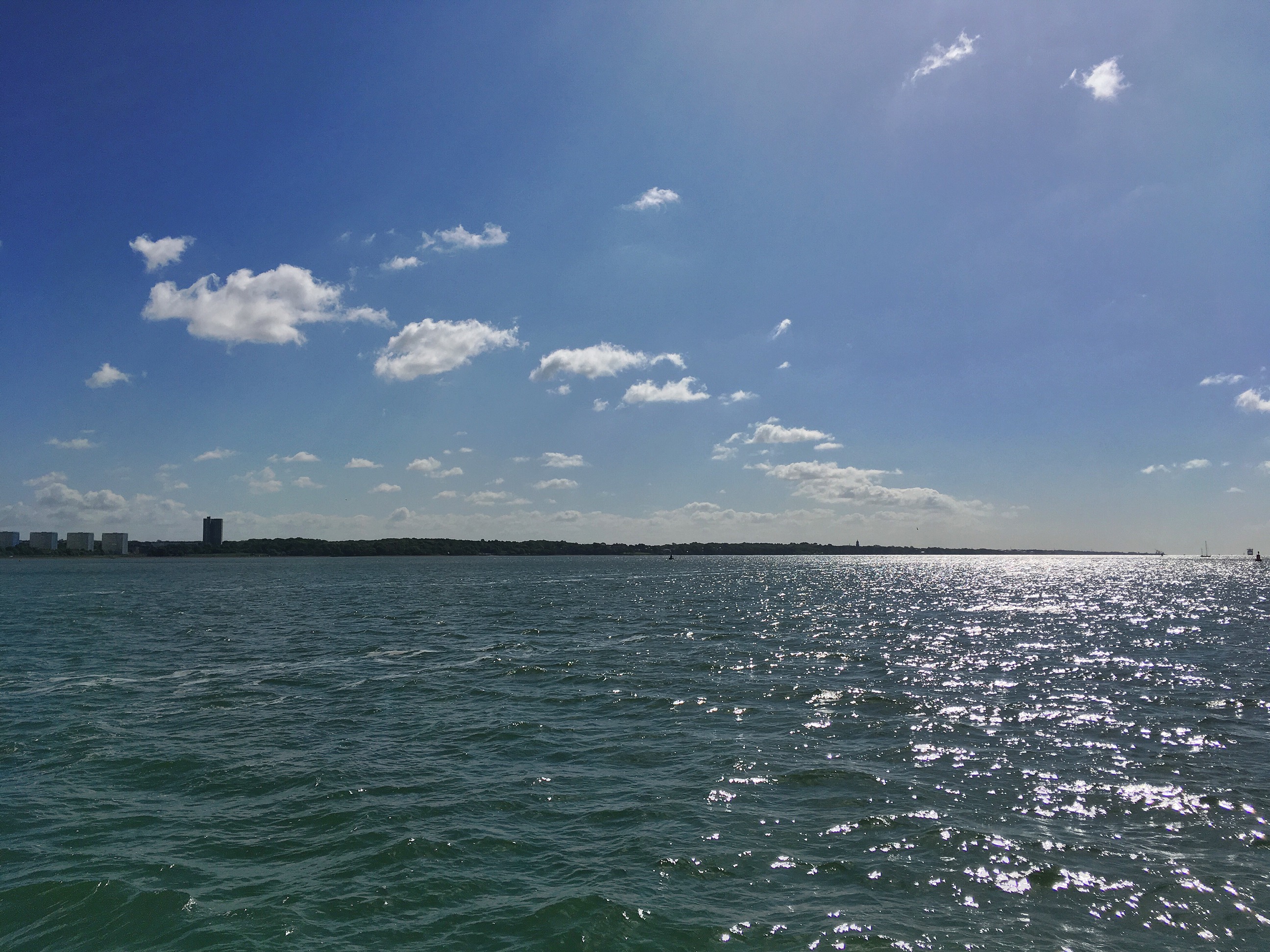 Then we were slowly pulling into Hythe and our attention turned to the starboard again and all the things we were going to see. The pier looked incredibly long and, as we got closer to it, more than a little ramshackle. This didn’t seem the best of times to tell CJ about the accidents my research had uncovered. There have been a few. In July 1885 the schooner Annie collided with the pier and damaged five of its piles. The same thing happened with a landing craft in 1945. Possibly the worst accident happened in 2003 when the dredger Donald Redford tore a one hundred and fifty foot hole through the middle of the pier, narrowly missing the pier train and a crowd of football supporters on their way home. The master of the dredger was drunk and was prosecuted. It cost £308,000 to repair the pier. The most recent accident happened in May 2016. The ferry Uriah Heep had a mechanical problem and hit the pier. The boat was damaged but the pier remained intact. 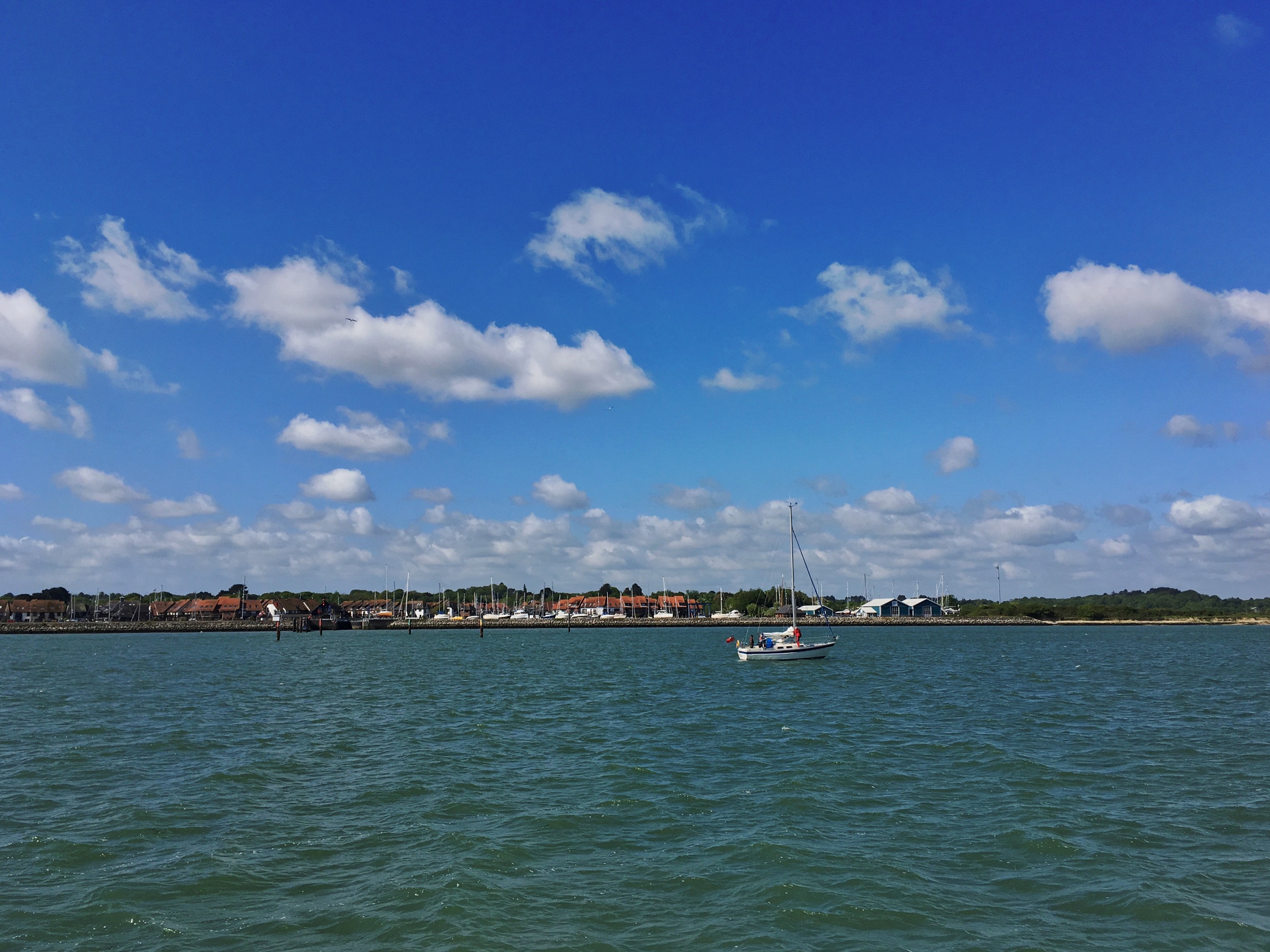 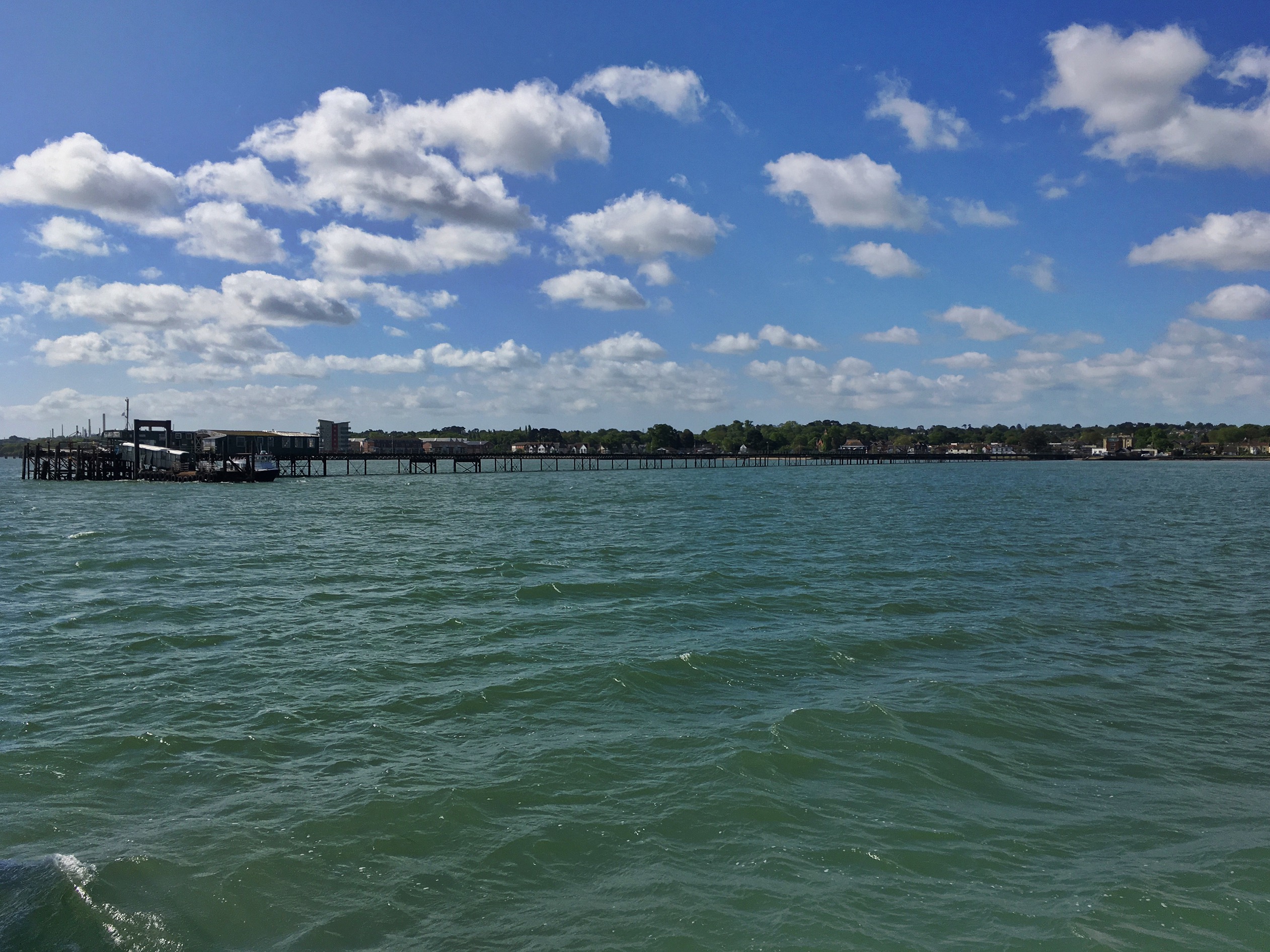 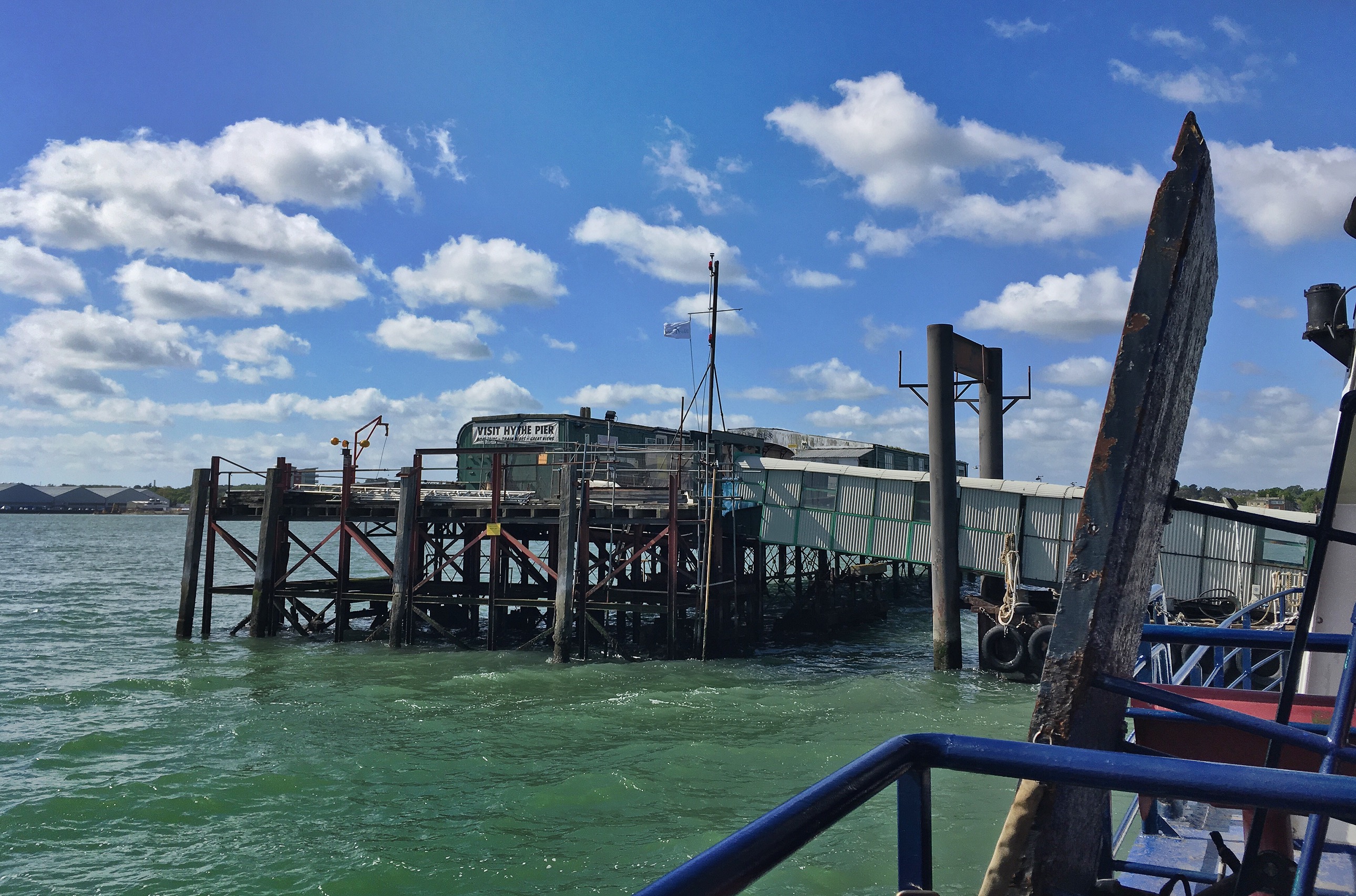 Thankfully, our ferry landed without incident. With one last look at where we’d come from, including a surprise view of the Itchen Bridge and the Isle of Wight Ferry, we were climbing off the boat and onto the pier. Unbelievably, CJ hadn’t even felt sick once. Of course, the whole journey had only taken fifteen minutes. 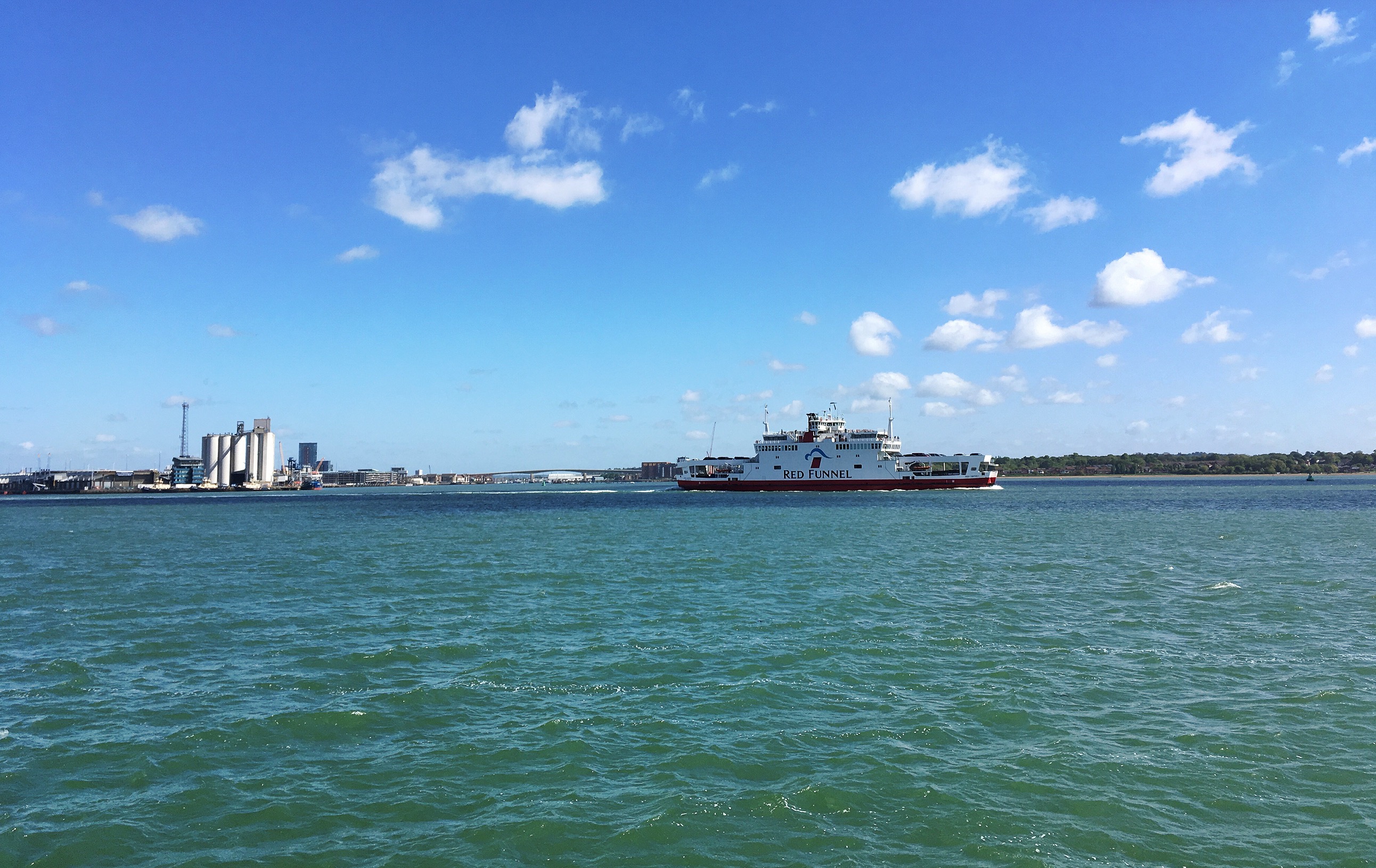 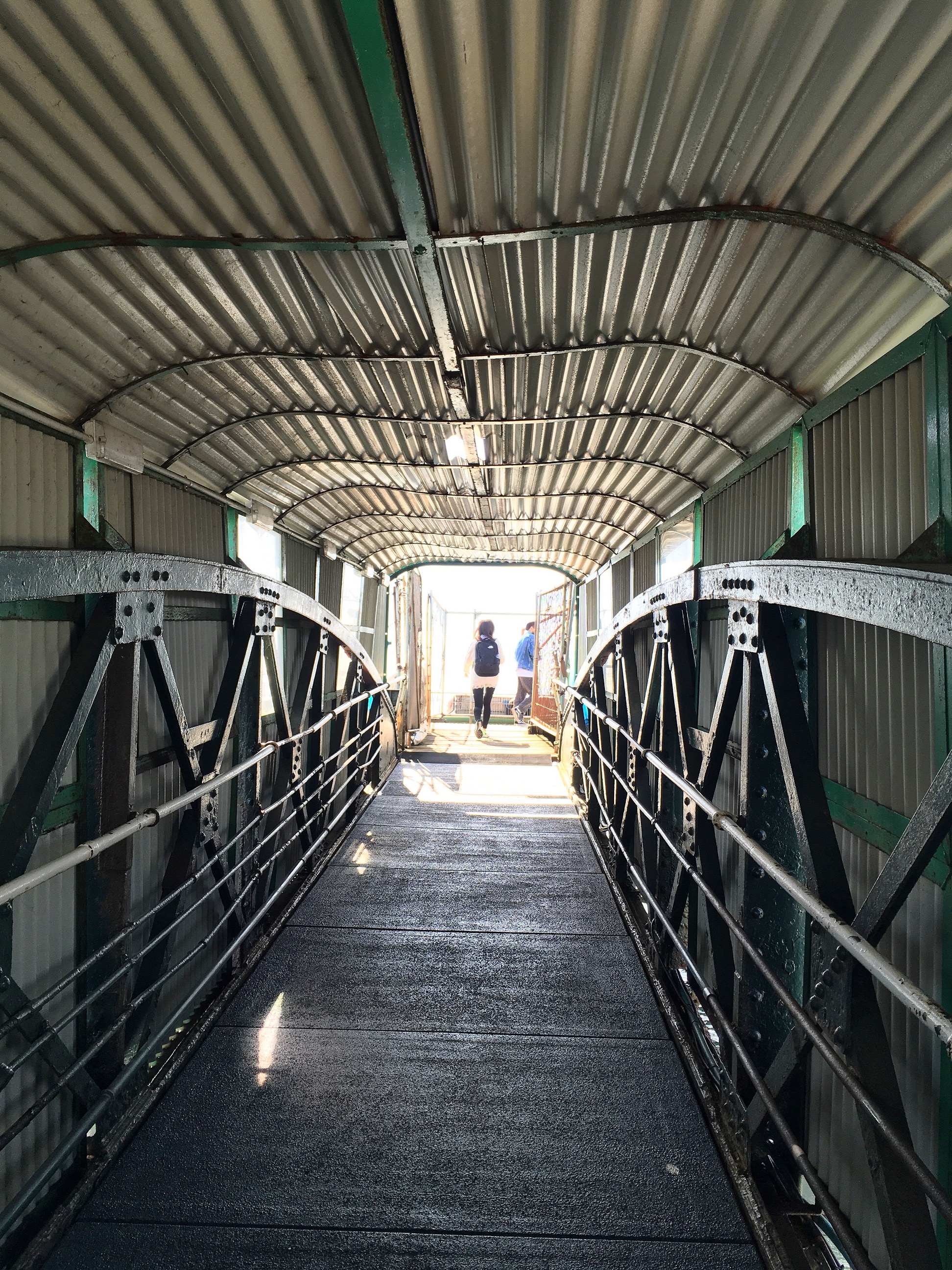 Now it was time for a little of the history I’d so carefully researched back in November. The pier that had looked so long as we approached it, is actually the seventh longest in the UK, measuring two thousand one hundred feet. Originally Hythe had a short stone pier, built in 1845 to the north of the present one. Ferry boats couldn’t always get close enough to it though and passengers often got wet feet. In 1870 plans were drawn up for a fancy new pier with a steam bridge at the far end. A company was formed and an Act of Parliament obtained but the project proved too expensive and was shelved.

Four years later a new company, the Hythe Pier and Hythe and Southampton Ferry Company was formed. A second Act of Parliament was passed in 1875 and new, simpler, plans were put forward. Then everything stalled again. There were legal disagreements with the Southampton Harbour and Pier Board. Finally, in 1877, a third set of plans were accepted but it took two years for funds to be raised and work to begin. The contractors, Messrs Bergheim and Company of London, set to work and, in 1881, the pier finally opened. It had cost around  £7,700, a huge sum of money at that time. 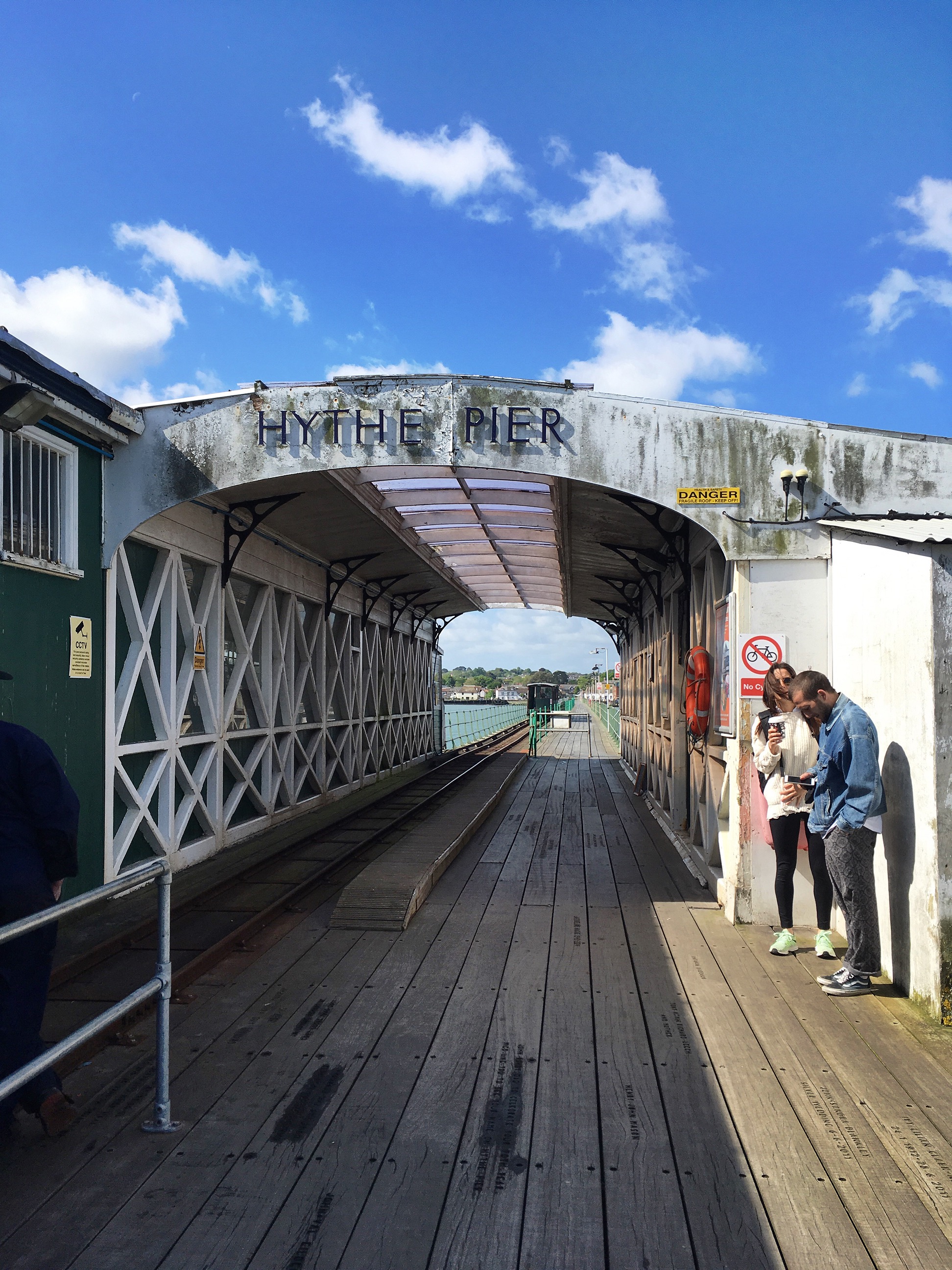 Now we were actually standing on the pier we had a choice to make. We could walk along the pedestrian walkway come cycleway into Hythe or we could catch the oldest pier train in continuous operation in the world. As the little train was barrelling towards us, albeit rather slowly, It seemed rude not to catch it. In fact the train goes back and forth in time with the ferry landings, so it was no coincidence that it arrived when it did. The little railway actually began life as a baggage transportation system. With such a long pier, getting heavy luggage onto the ferry boats would have been no easy task and, in 1909, tracks were laid so trolleys could be easily pulled along the pier. In 1922 the tracks were electrified and a narrow gauge electric railway began to operate, carrying both luggage and passengers. 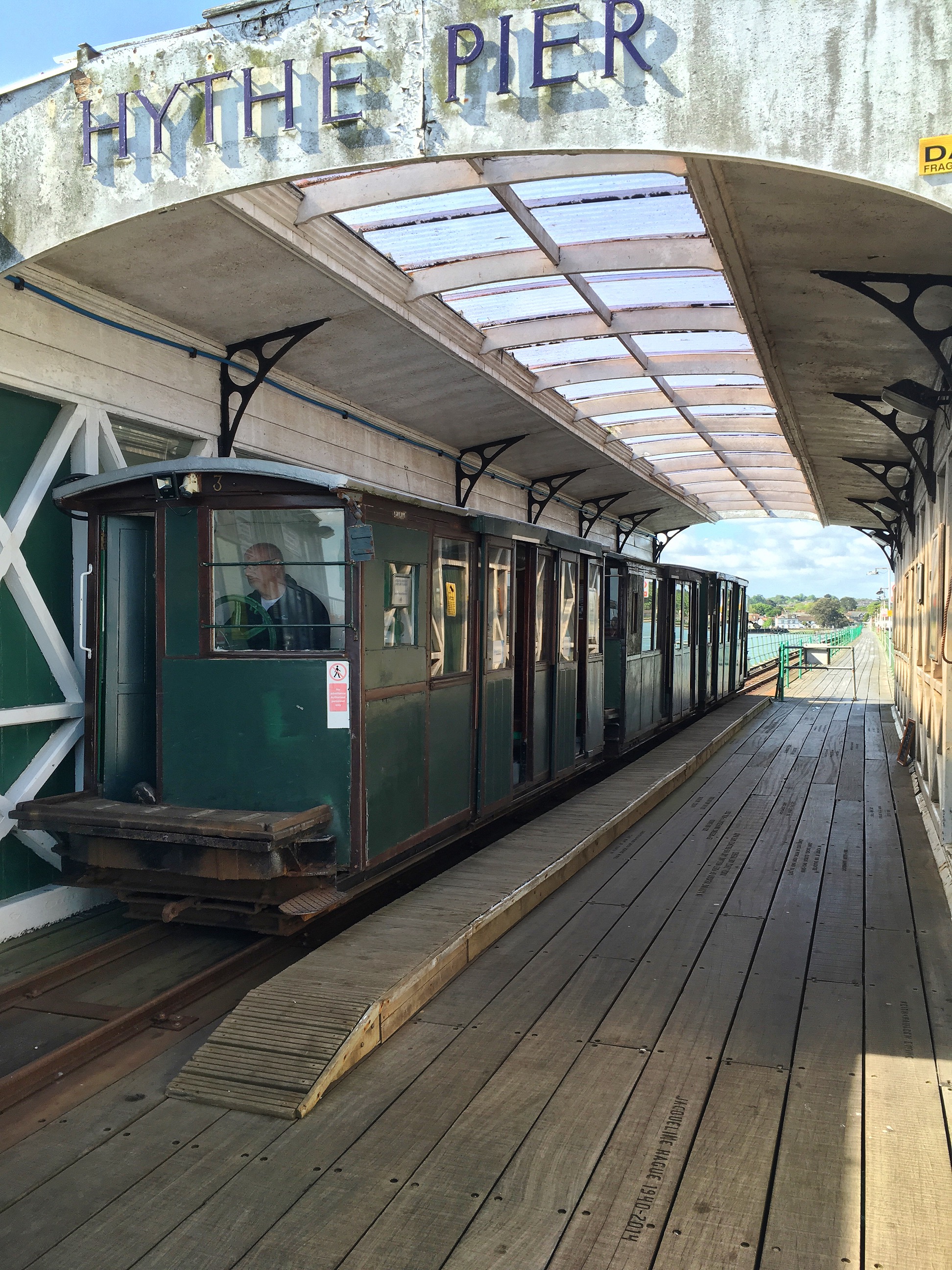 There are two little trains, both of which were originally battery locomotives at the Avonmouth Mustard Gas Factory in Bristol during World War I. They may be small and rather odd looking but the wooden seats inside are comfortable and we felt rather excited to be sitting inside such a piece of history. 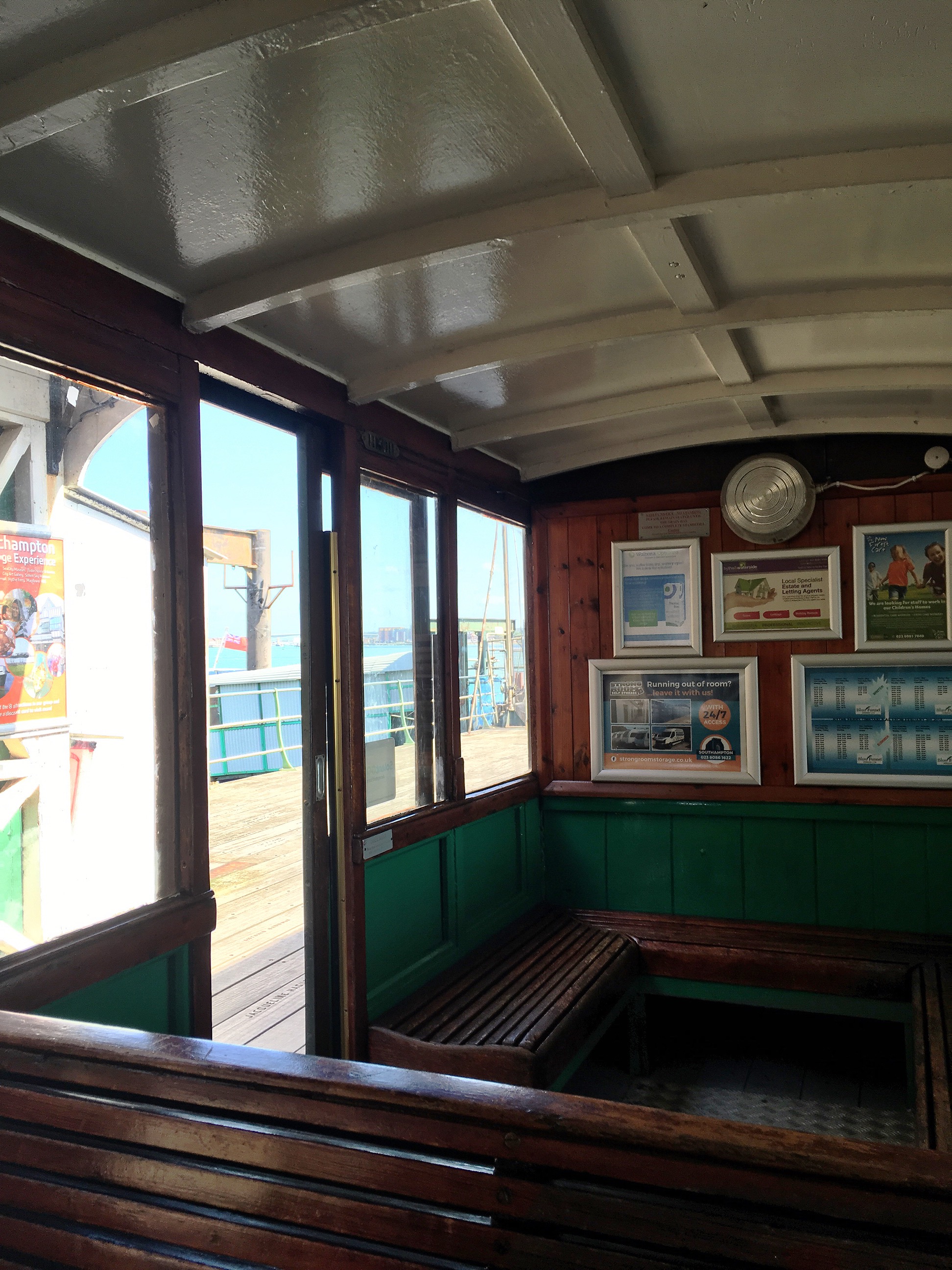 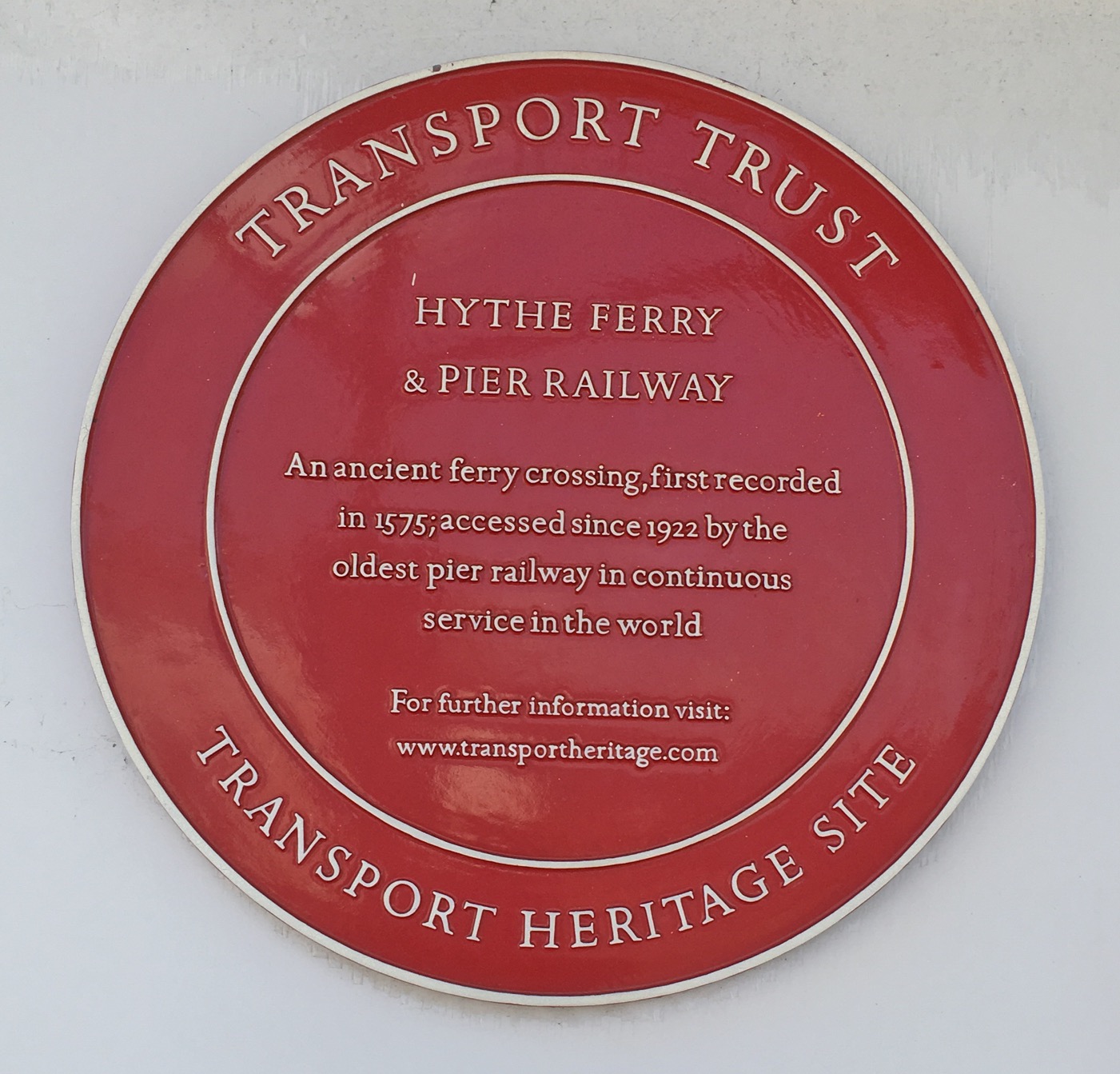 The little train may have been slow, in fact we might have been able to walk faster, but we were soon at the far end of the pier, ready to begin our adventures in Hythe. It looked like we were going to have an interesting day. All we had to do was decide where to go first. 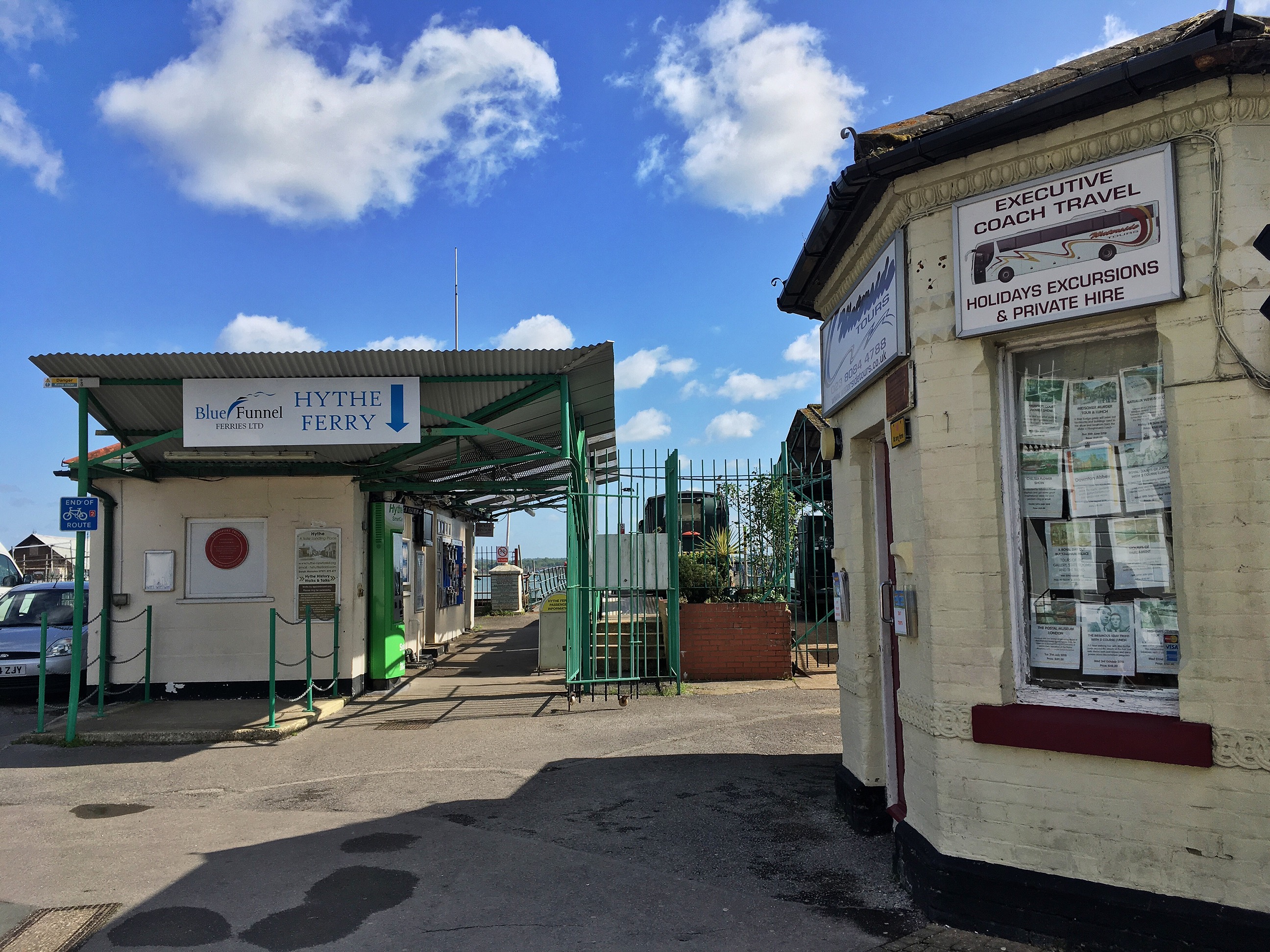 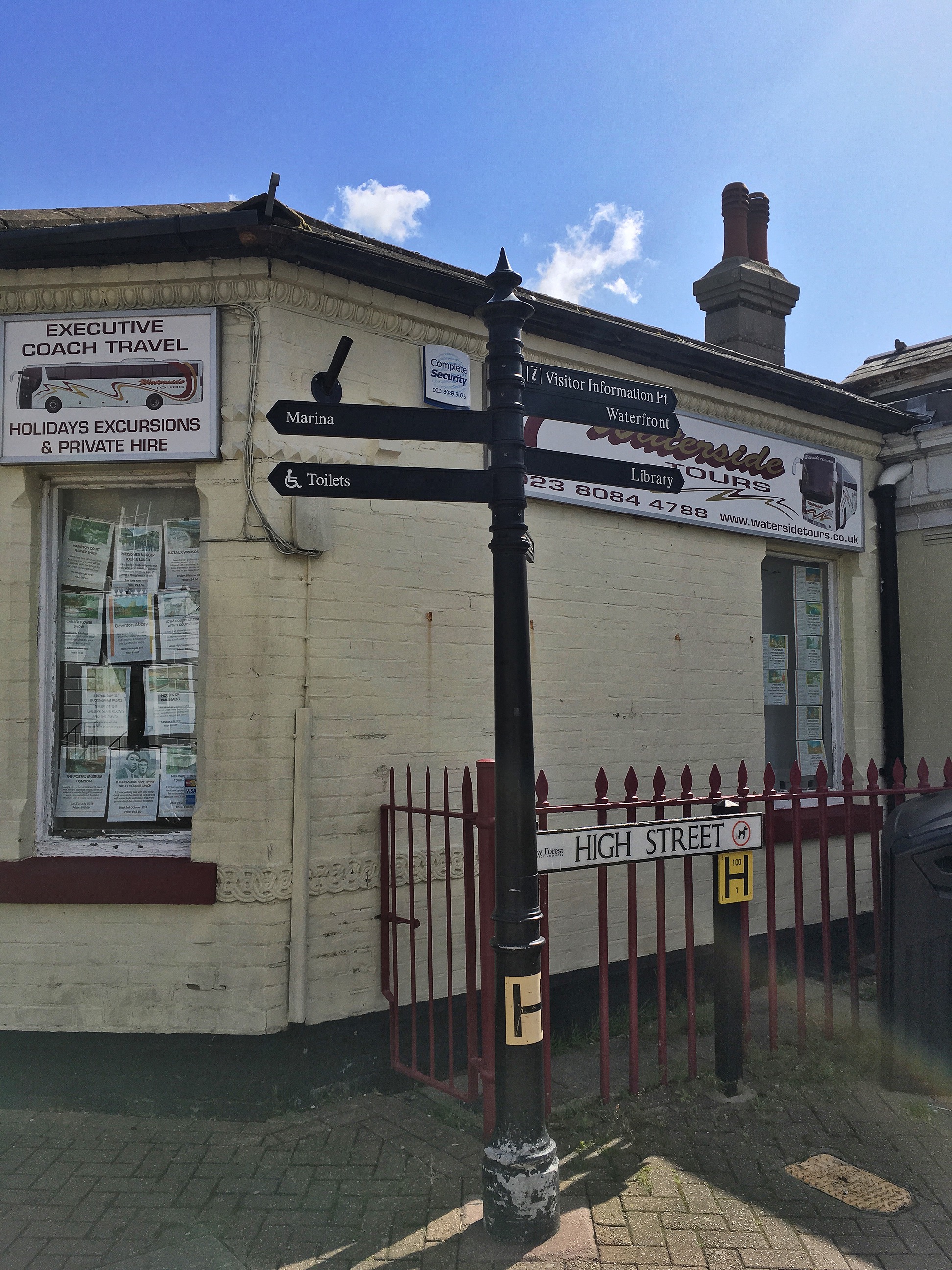 4 thoughts on “A short cruise and a very long pier”