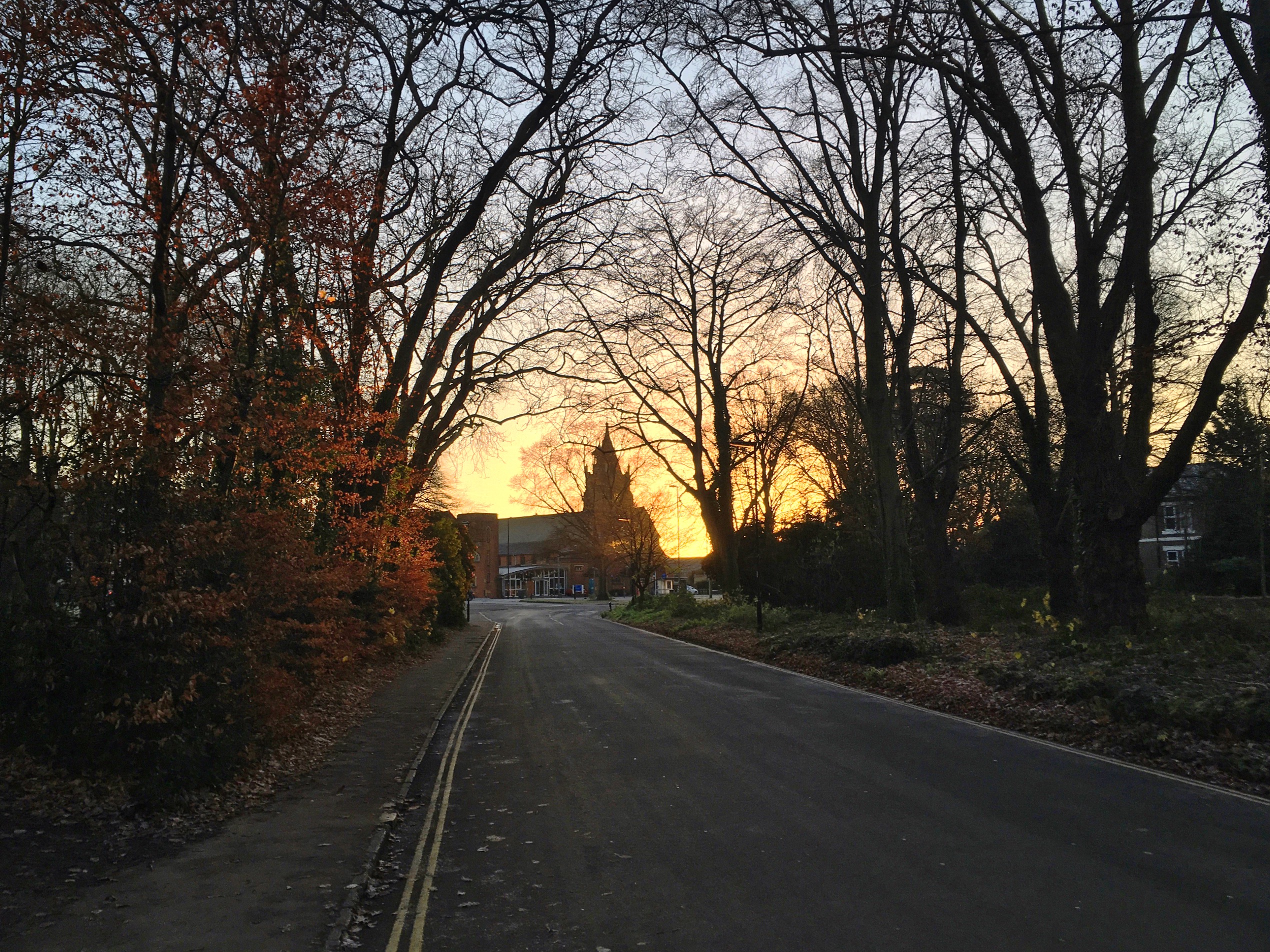 It isn’t always easy to get out of bed early on a Saturday morning and go to parkrun. Often there is a great temptation to roll over, pull up the covers and let Commando go on his own, especially on cold, frosty winter mornings. After all, it isn’t as if I’m actually going to run. Sometimes though, those are the very best mornings of all to be walking down Cemetery Lane towards the Common. Despite the icy air burning my lungs and the cold nipping at my fingers and toes, the golden light of a new day makes me glad to be there. 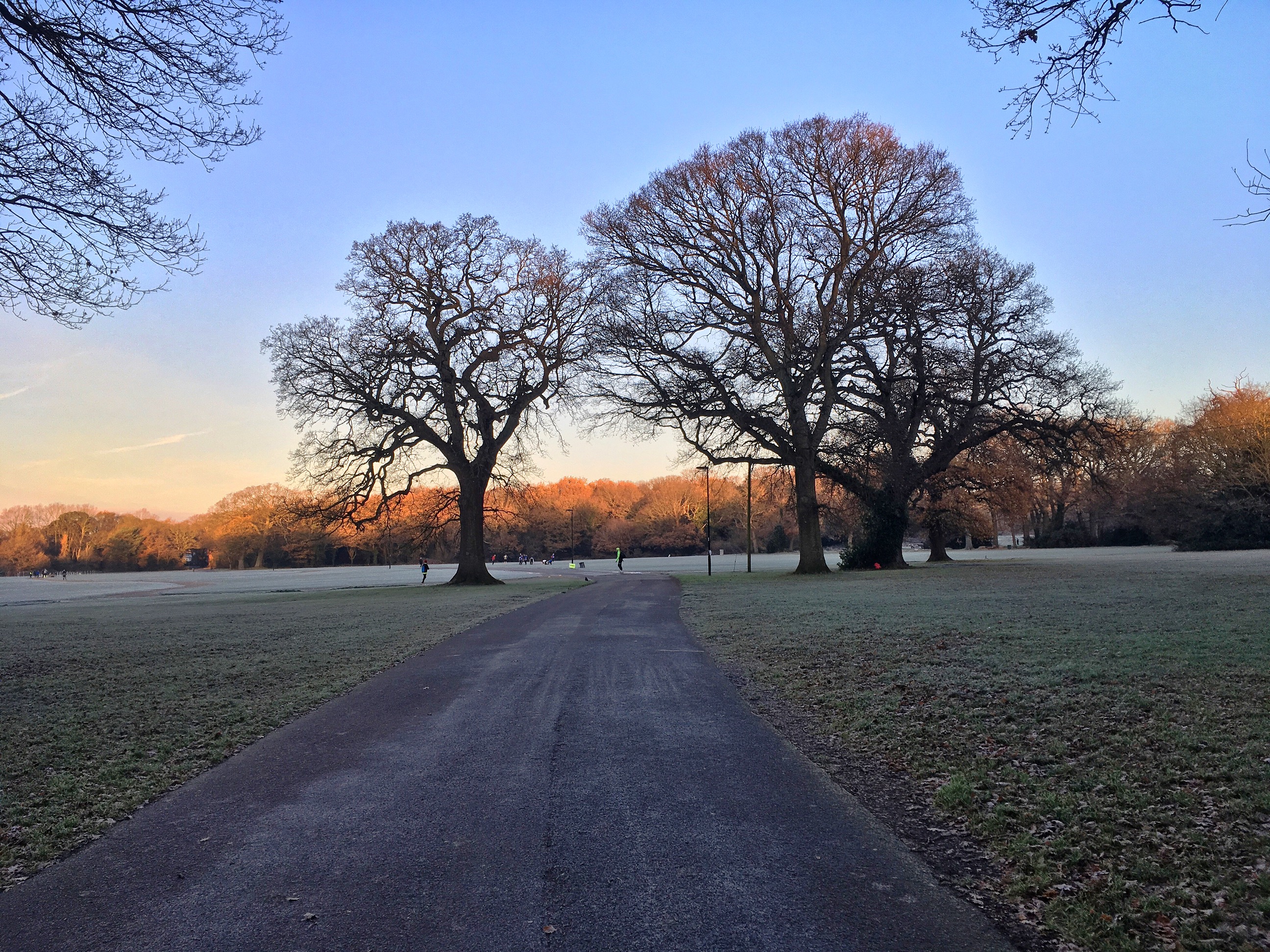 There may be frozen puddles but the frost encrusted grass crunches satisfyingly underfoot and the bare branches of the trees are burnished by the rising sun. This is when the Common is at its best. It seems huge and empty except for a few hardy souls like us arriving early to set up the finish funnel and put out the signs. On mornings like this I can hardly wait for the race to begin so I can crunch across the hoary field to the Old Cemetery. 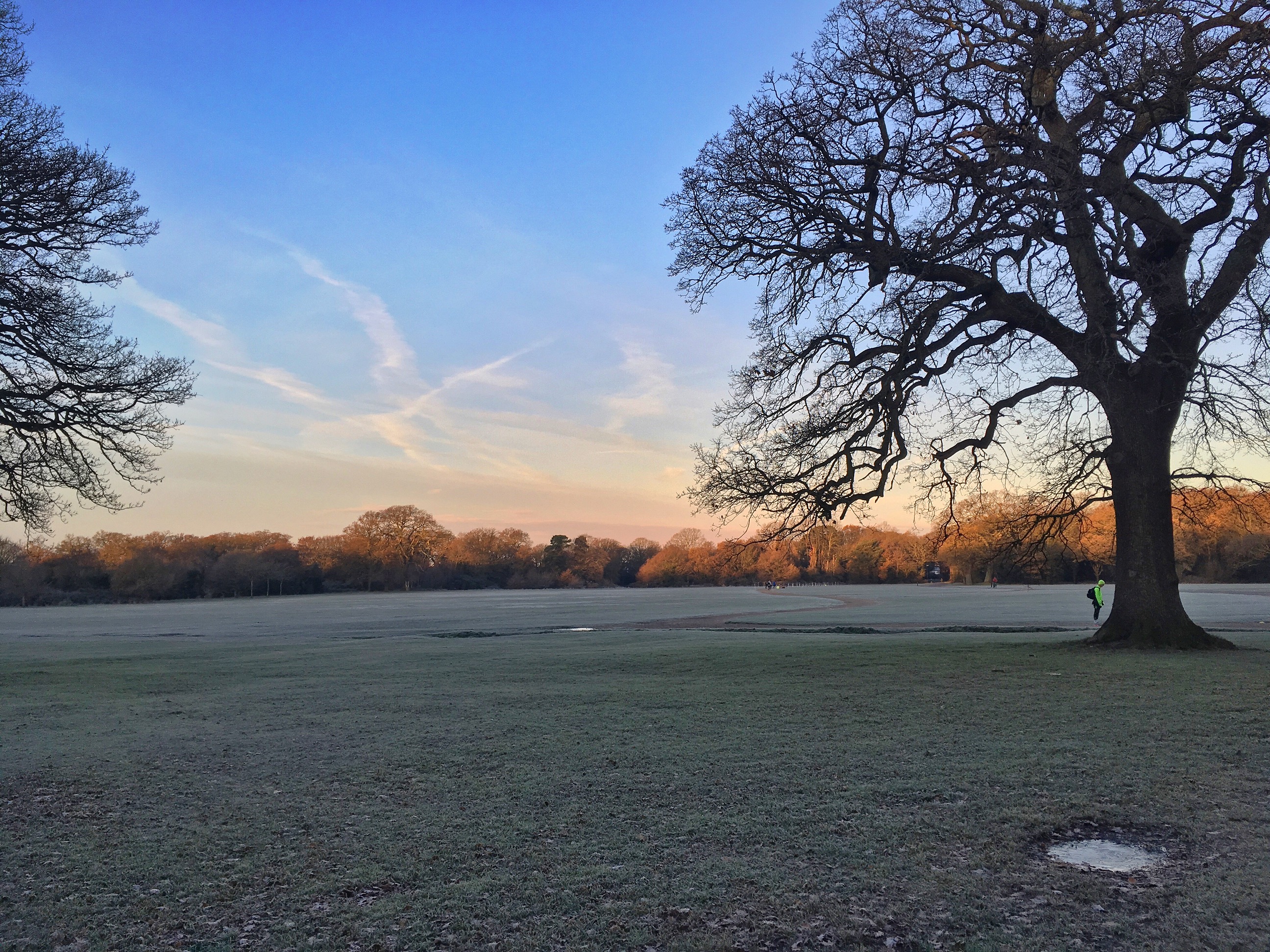 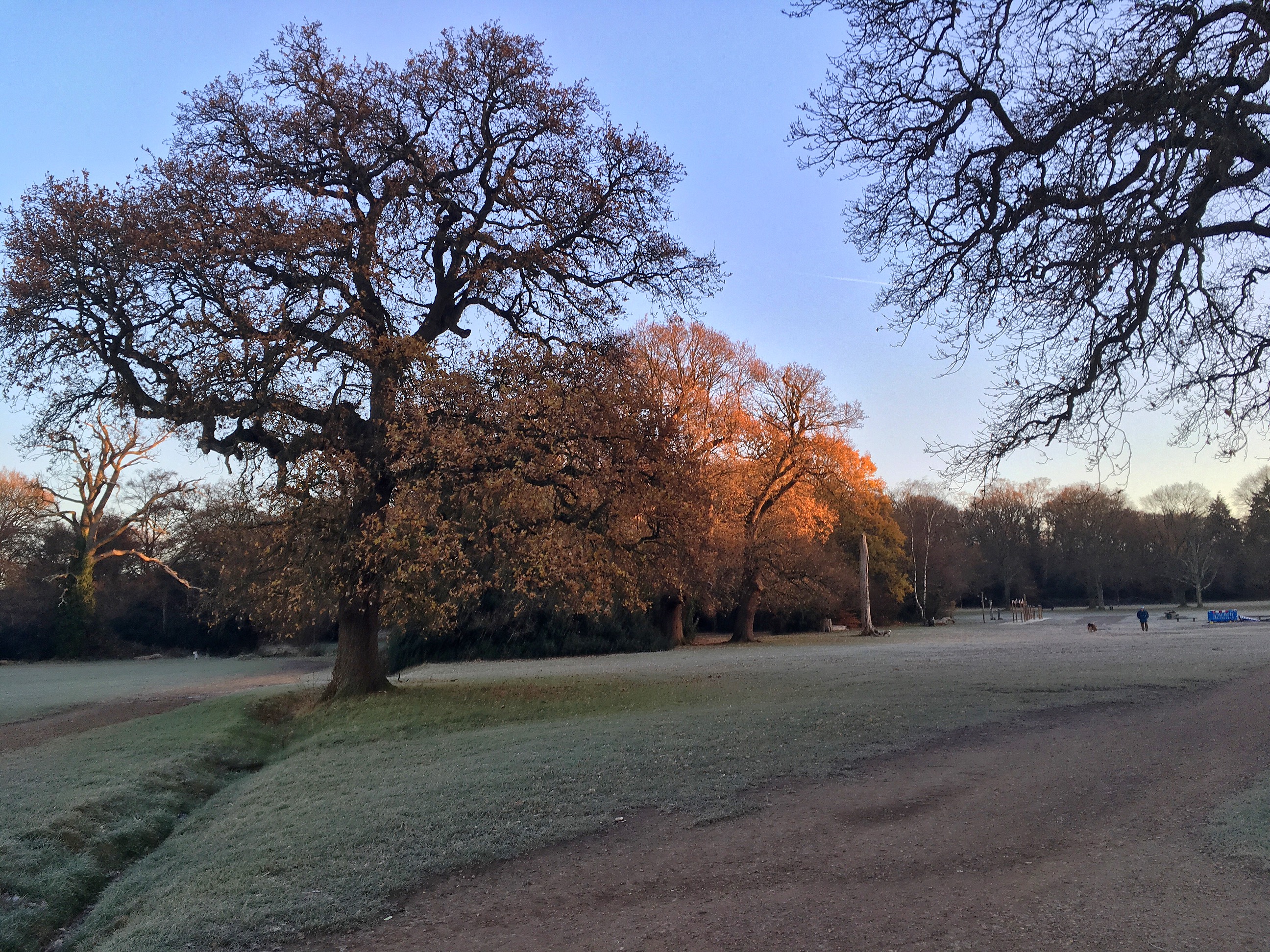 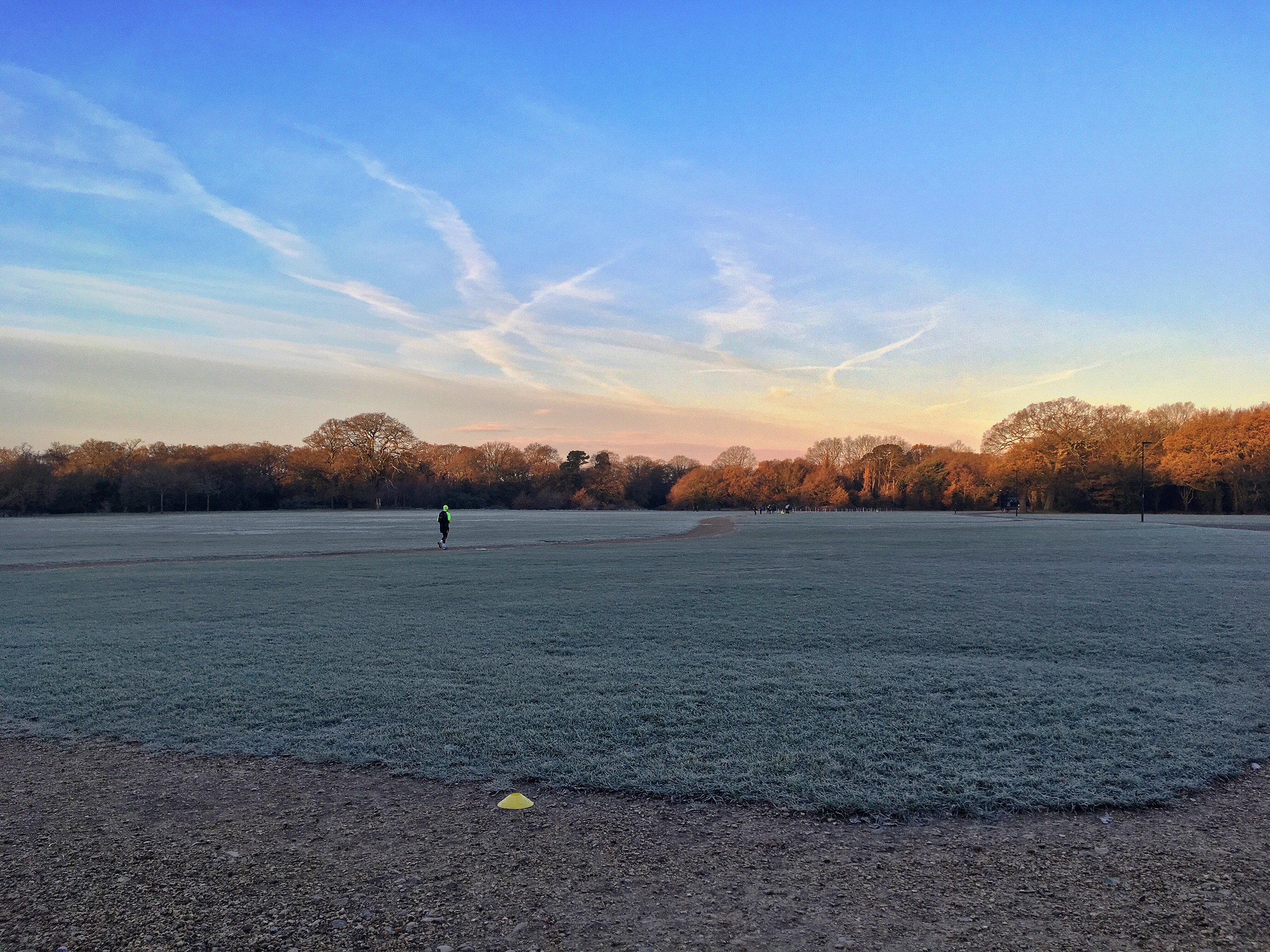 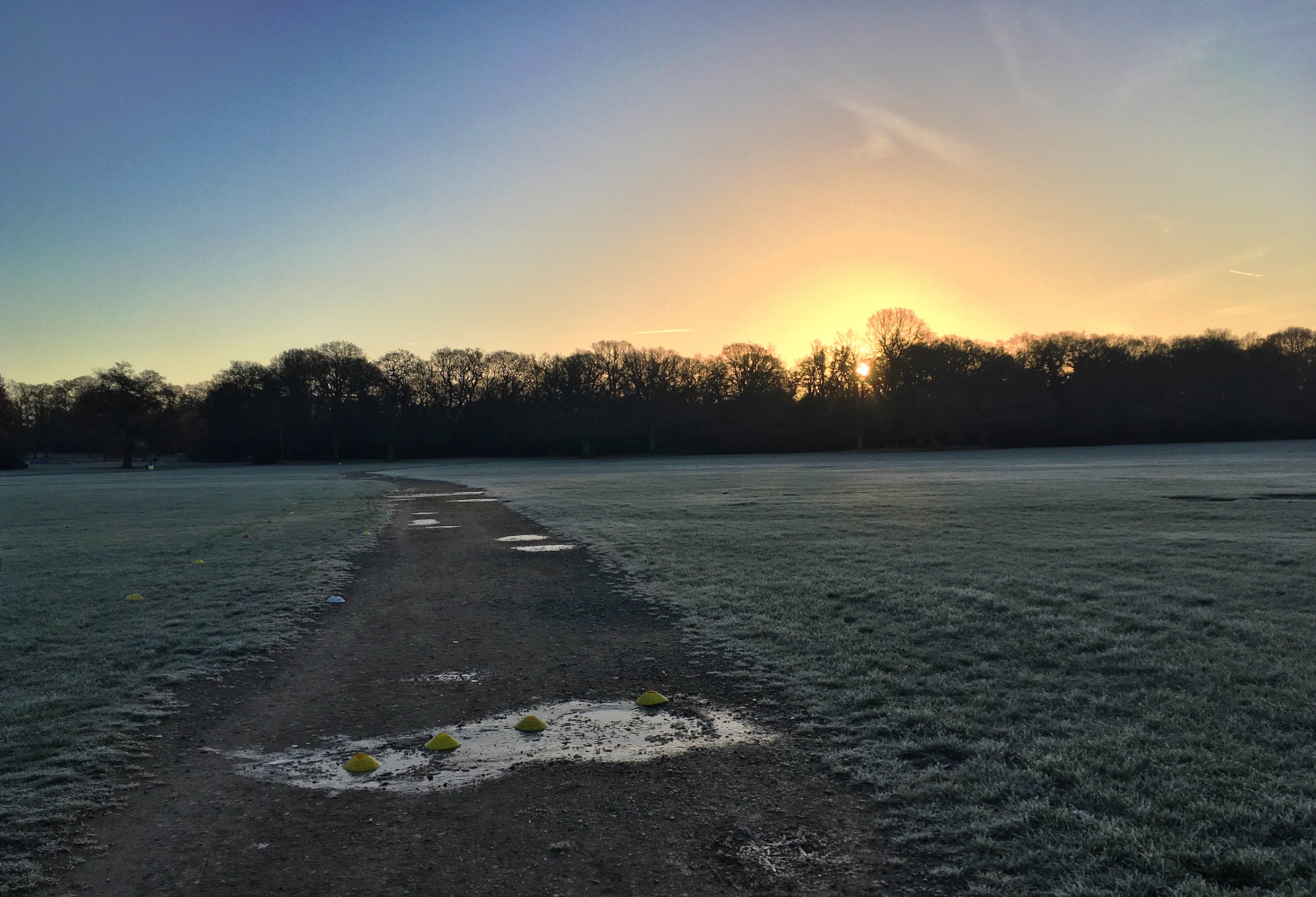 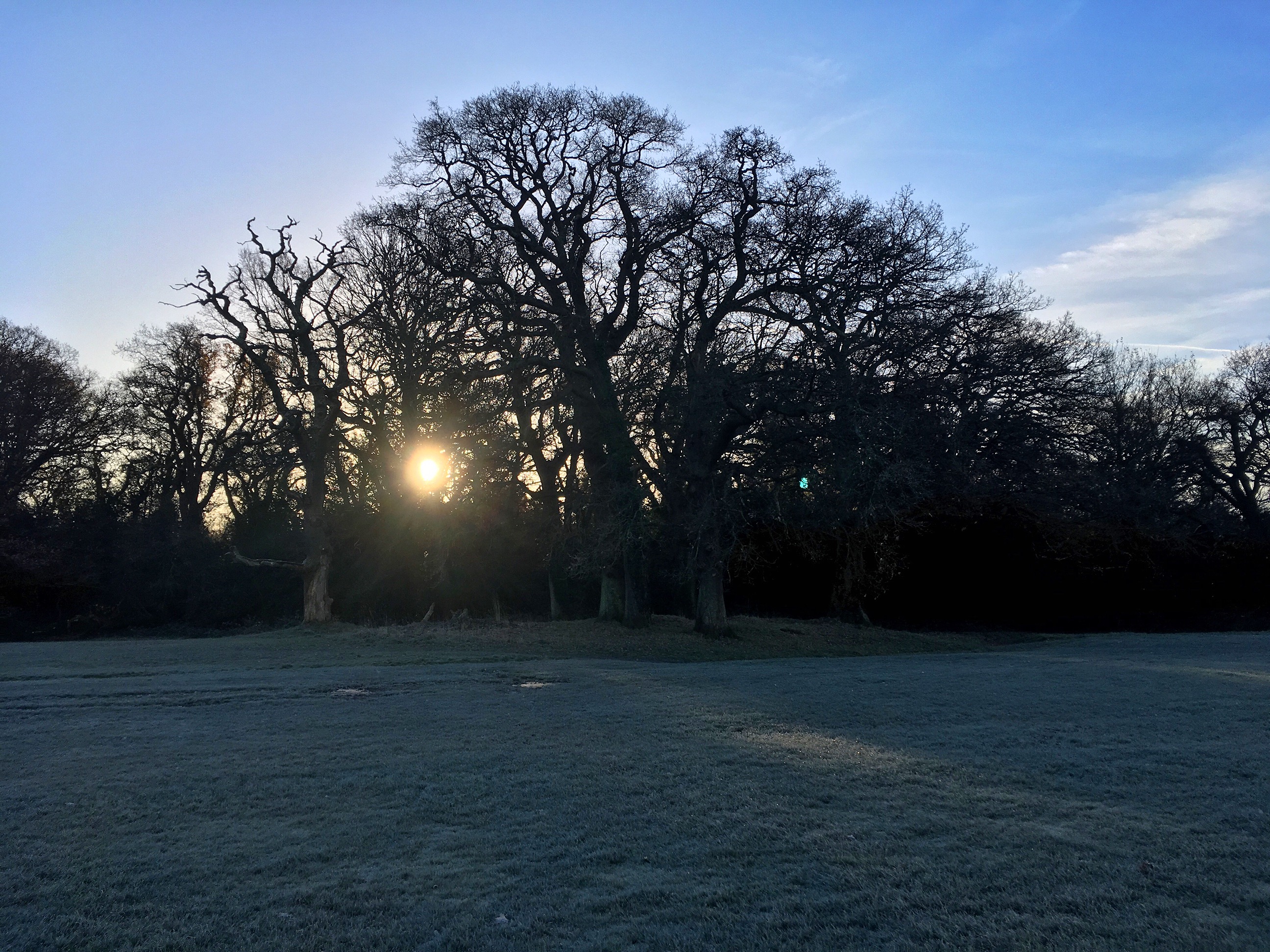 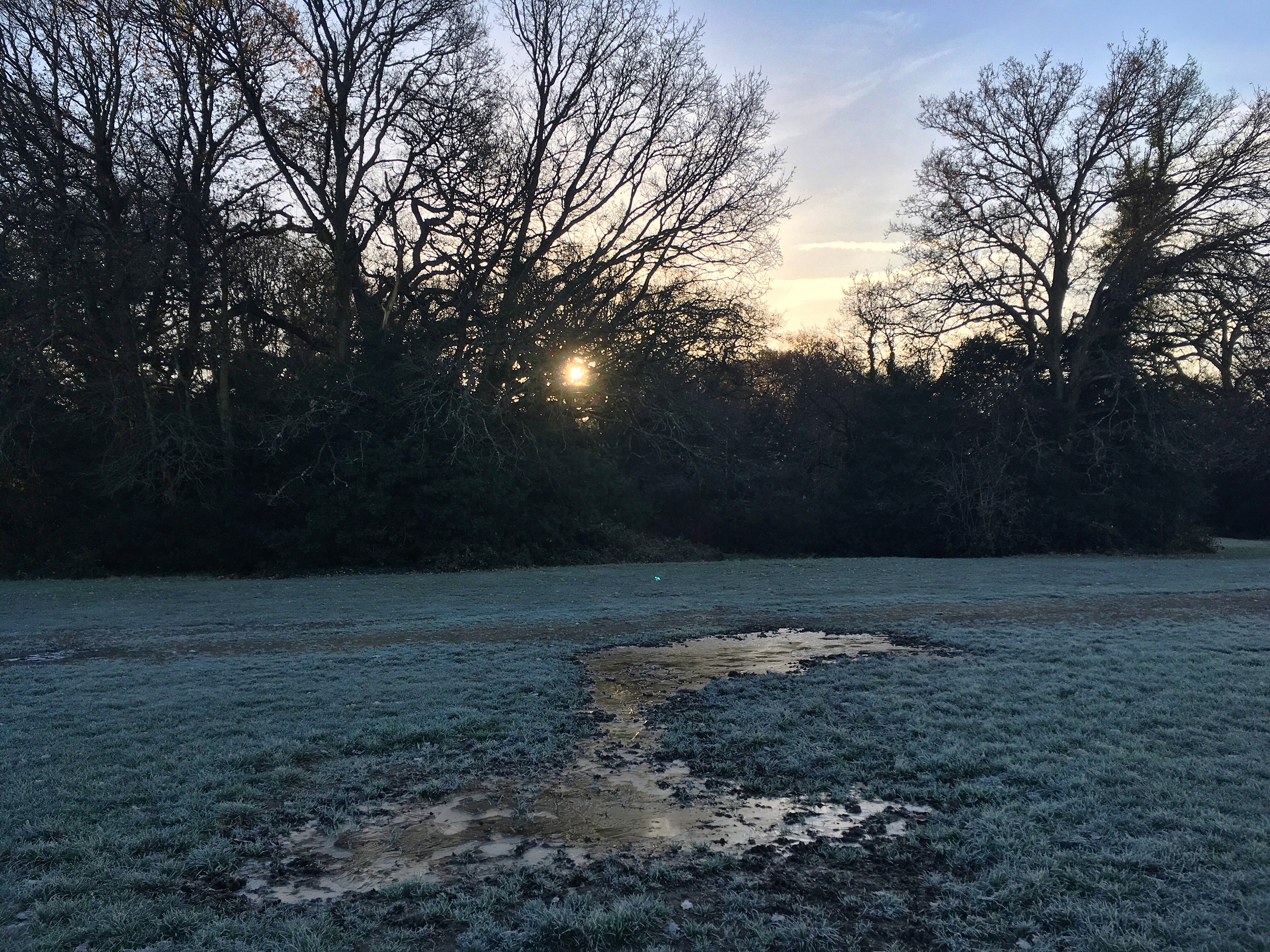 It always seems to be a few degrees colder on the other side of the Cemetery gate and, even with gloves, my fingers are soon numb and painful. The icy ground freezes up through my fur lined boots and makes my toes hurt no matter how many pairs of socks I wear. My breath comes out in thick white clouds. My eyes though, behold a feast of beauty that can almost bring me to tears. 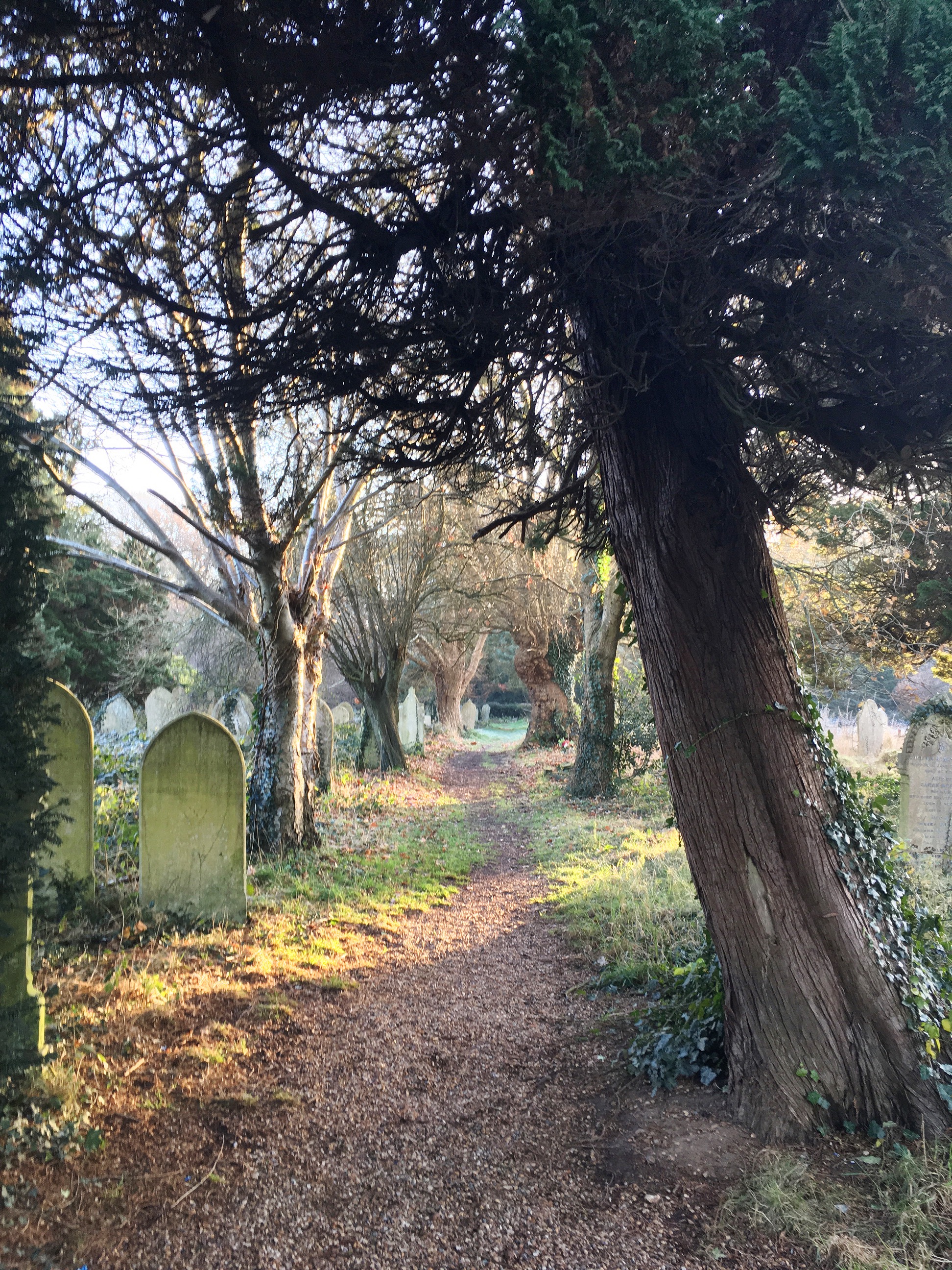 The low winter sun slanting through the trees seems to highlight some stones while casting others into shadow. The grass is crisp underfoot and sparkles where the sunbeams touch it. The way the frost twinkles on the stones and the contrast of light and shade always makes me smile. The only flowers in winter are the gifts left on graves for those who are still remembered. They are few and far between here. 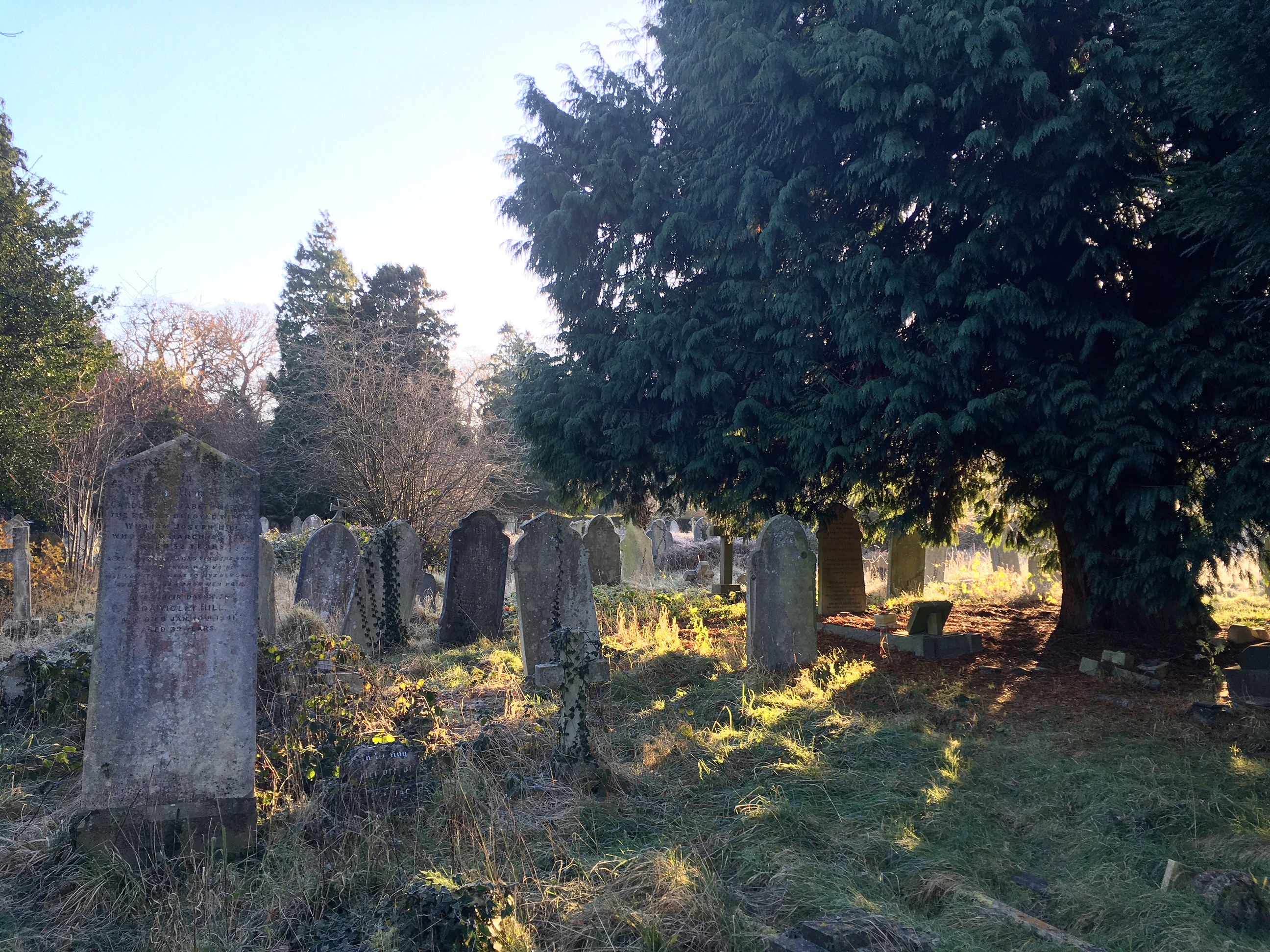 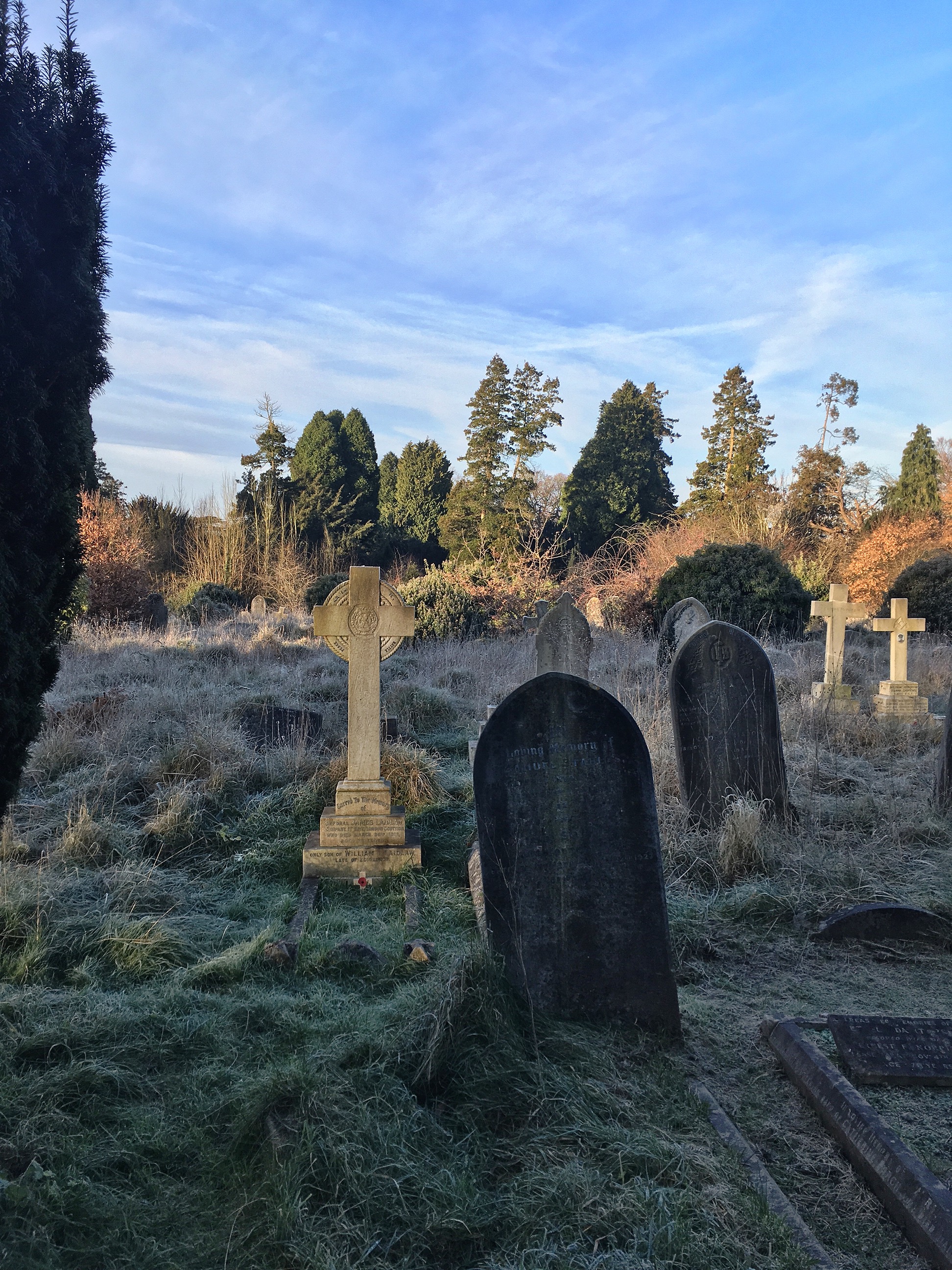 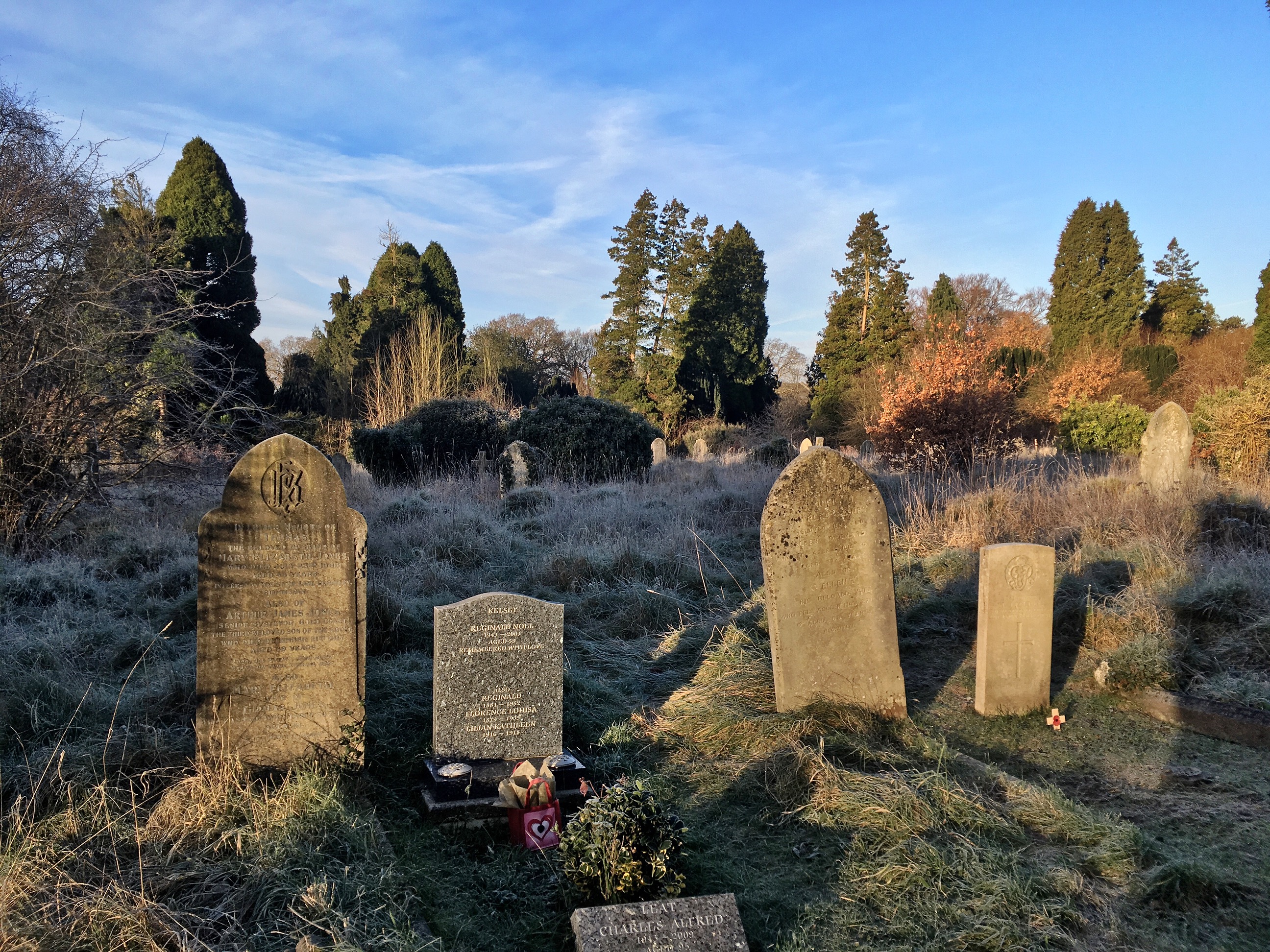 There is one large, memorial that glimmers without the aid of ice. The pink marble is polished to a permanent shine and it stands head and shoulders above the graves around it. This landmark stone is the Rosas memorial, a tribute to the Argentinian General Juan Manuel de Rosas. The general, though, is no longer here. 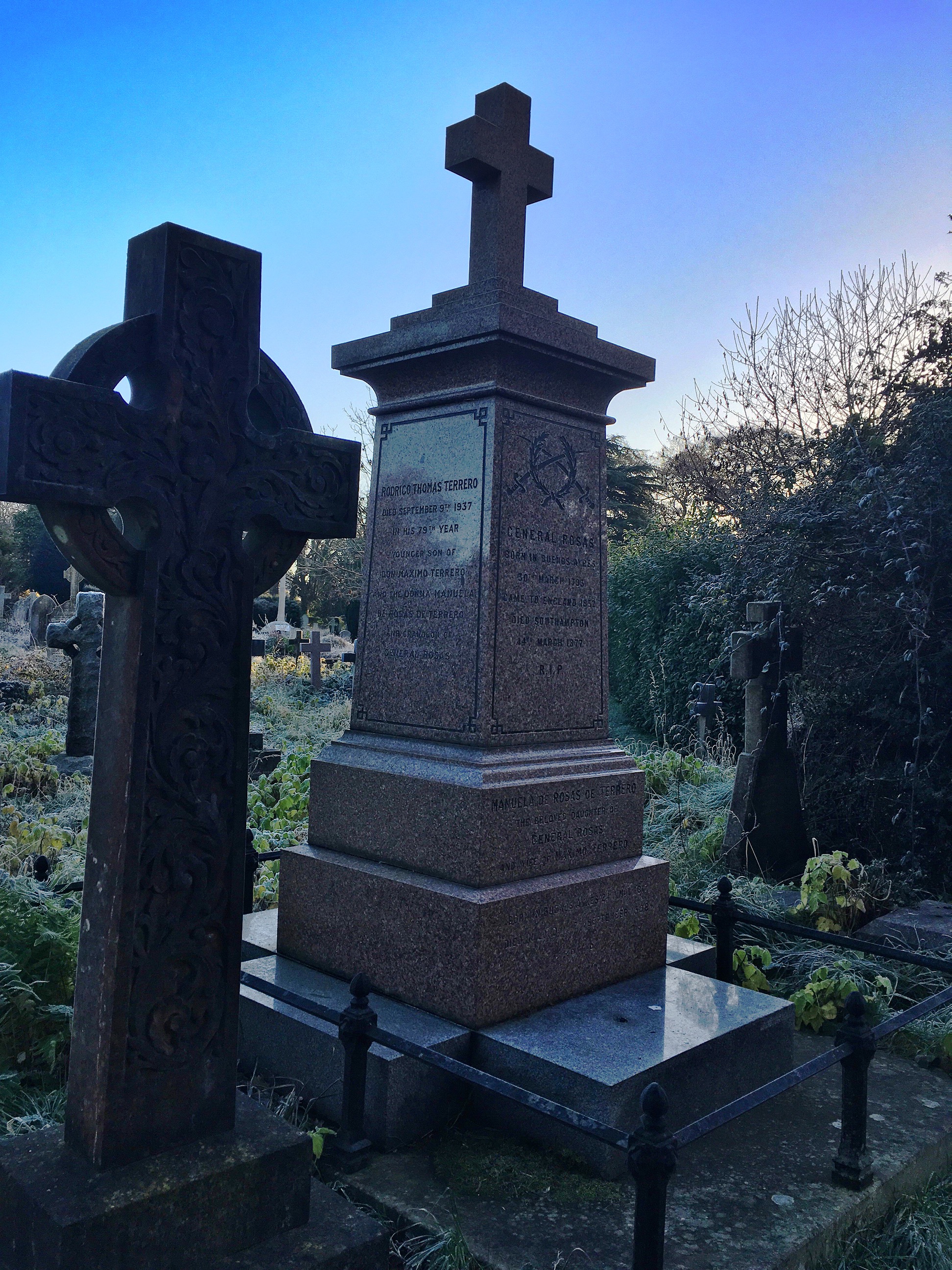 De Rosas was the Governor of Buenos Aires during the civil war in the 1800’s. He ruled by fear and terror, torturing and killing those who opposed him. It’s thought he put fifteen thousand people to death during his rule. Needless to say, he was not a loved leader and, in 1852, he was forced into exile by a political coup. He chose to bring his wife and family to Southampton and set up home in Rockstone House in Carlton Crescent.

Later he bought the Burgess Street Farm in Swaythling, a site now occupied by the flower garden roads of Bassett. He lived in a rather pretty thatched farmhouse near what is now Langhorn Road and was often seen riding through the town on a black horse, looking exactly like the dictator he had once been. Unsurprisingly, it’s said he didn’t treat his farmworkers very well but he did pay them handsomely.

He never returned to his homeland and died in 1877. A family memorial was erected in Southampton Old Cemetery. After his death a revisionist movement tried, unsuccessfully, to improve de Rosas’ reputation in Argentina. Their attempts to rewrite history and paint him in a kinder light were never accepted but, in 1989, President Carlos Menem, decided to repatriate de Rosas’s remains. It was not an easy matter. His first plans to rebury the controversial general in Buenos Aires Cathedral were thwarted by papal red tape. He was eventually buried in La Recoleta Cemetery, with the pomp and ceremony of a head of state. 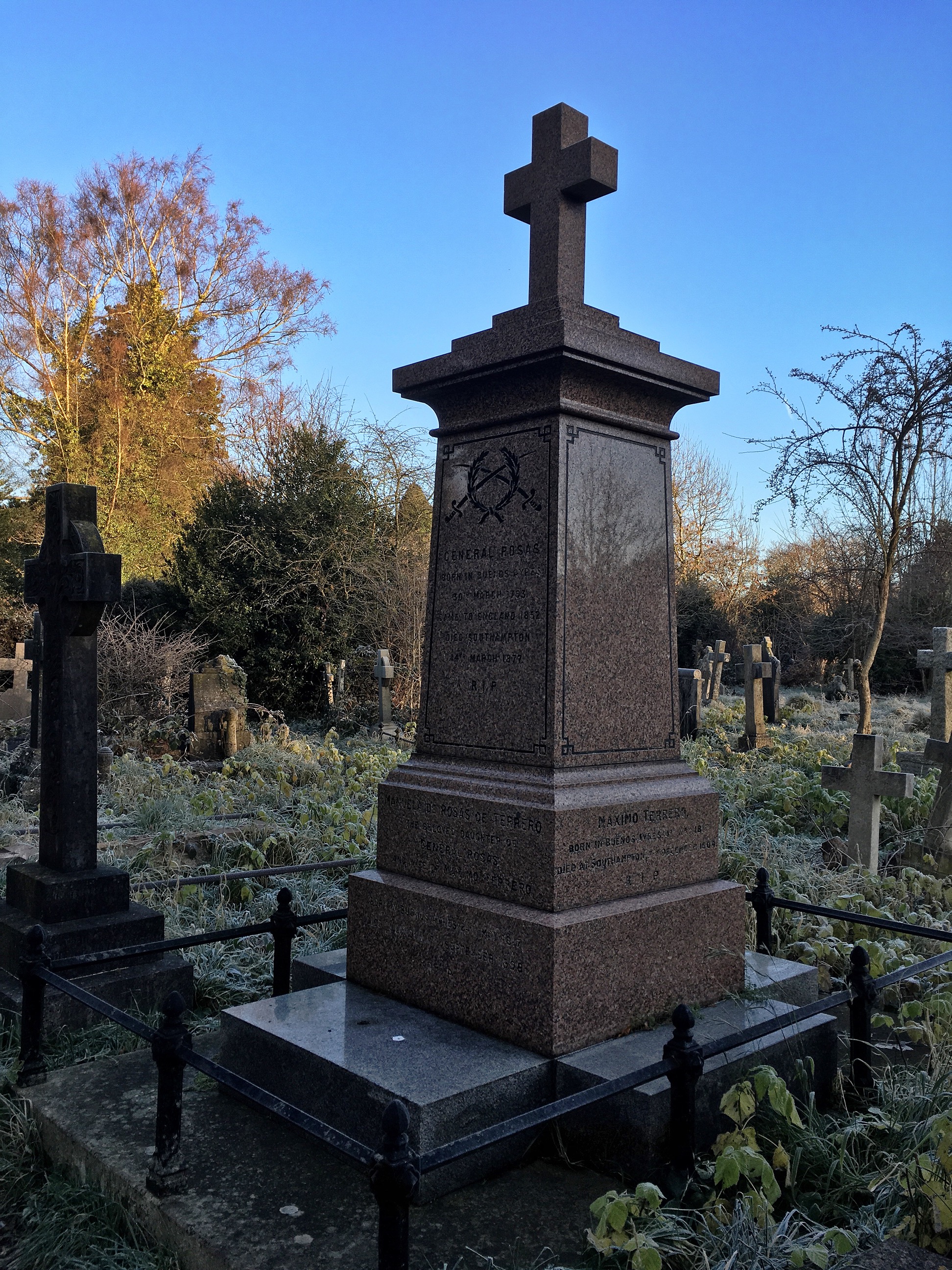 In the early 1800’s the Burgess Street Farm was included in a detailed survey of the area undertaken by John Whitcher of Liphook.  The maps and books he produced are now in the city archives. Quite close to the de Rosas monument is a far humbler grave belonging to John Whitcher. Whether this is the surveyor or just someone with the same name, is a mystery but, to me, it seems to illustrate that, everyone, good, evil, rich, poor, famous or unknown, is equal here. One stone may be larger and more elaborate than another but the ground beneath is just as cold. 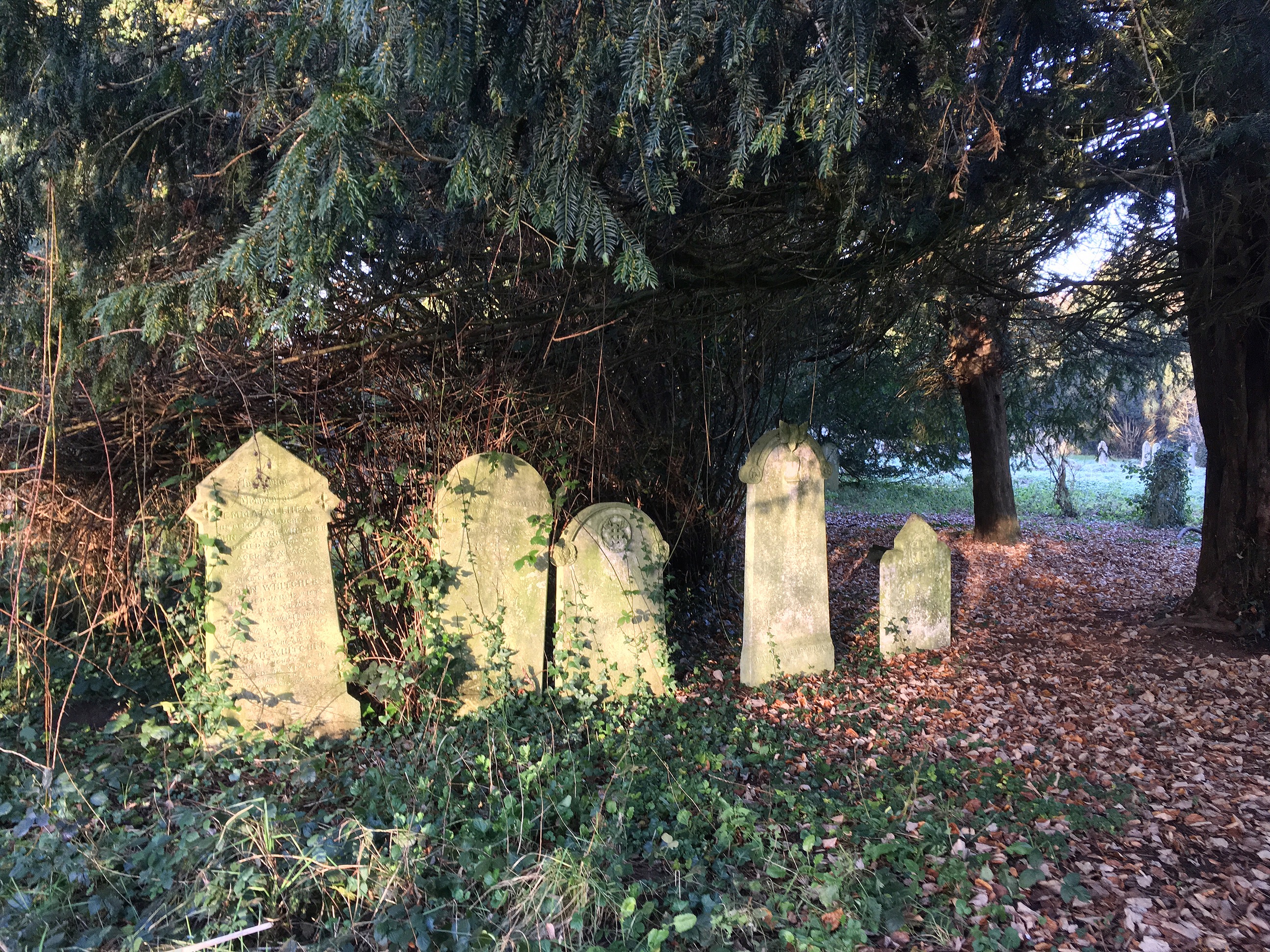 In winter this place is inhospitable to the living. The cold of the grave seems to seep up from the ground as if those beneath are clamouring for the warmth of a living body. The sun barely penetrates the shady areas at all and, where it does bring light, it there is no accompanying warmth. 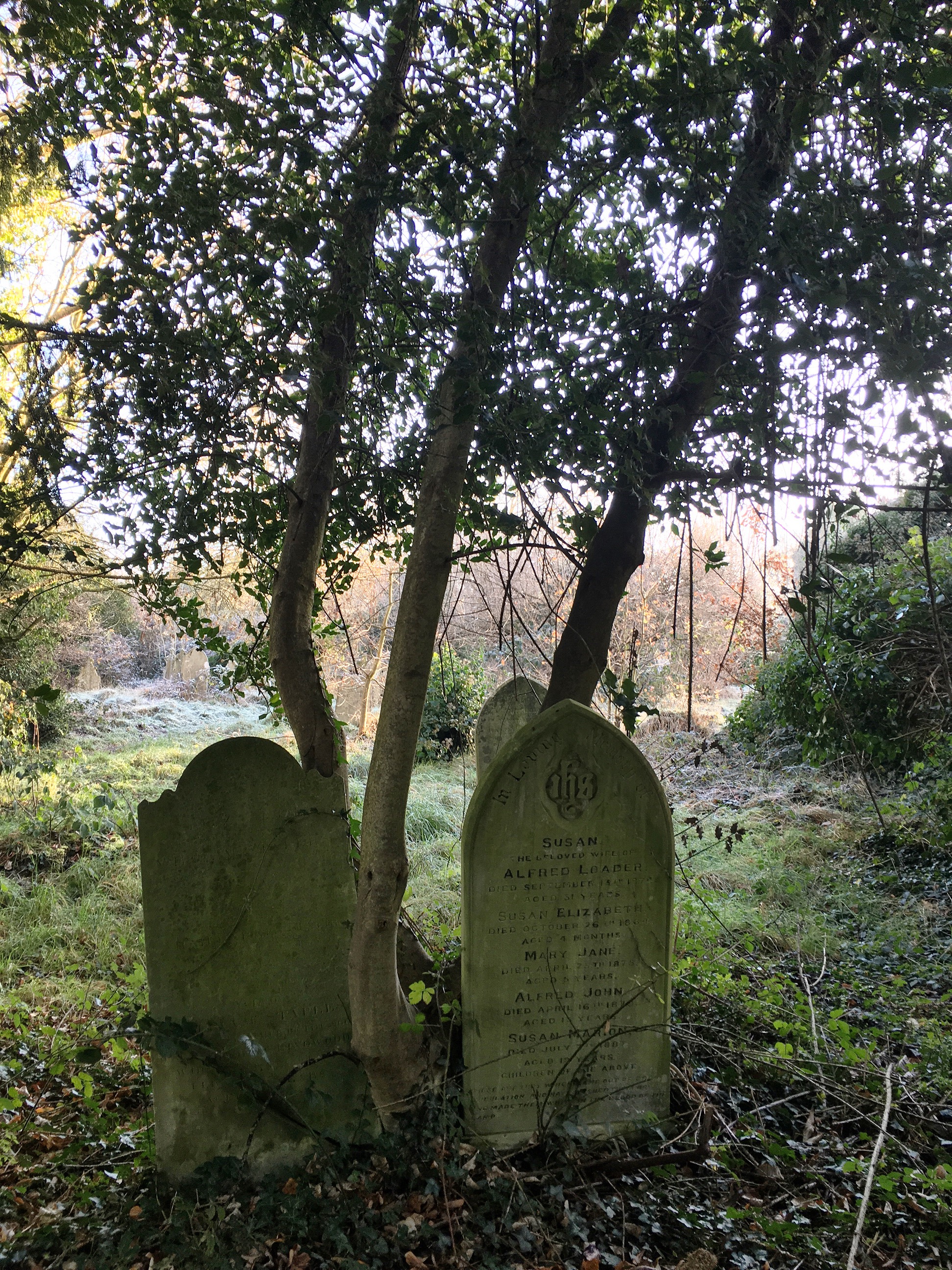 My winter walks through the cemetery are faster paced than those in warmer months. There is less time spent bending to dechiper the inscriptions on the graves or wondering at their stories. Even so, the stark beauty, the crunch of fallen leaves and frozen grass and the beams of sunlight, more than make up for my icy hands and feet. 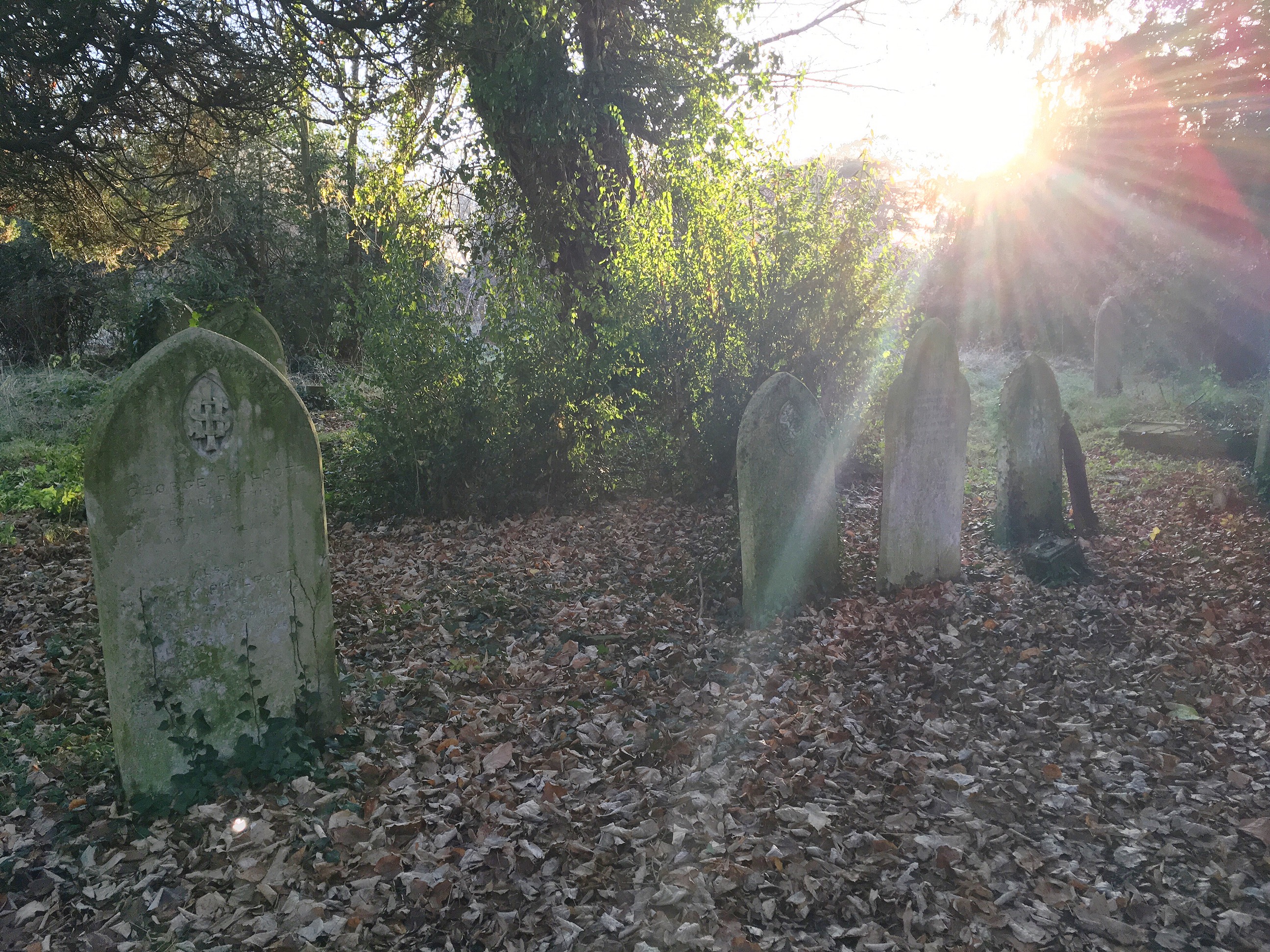 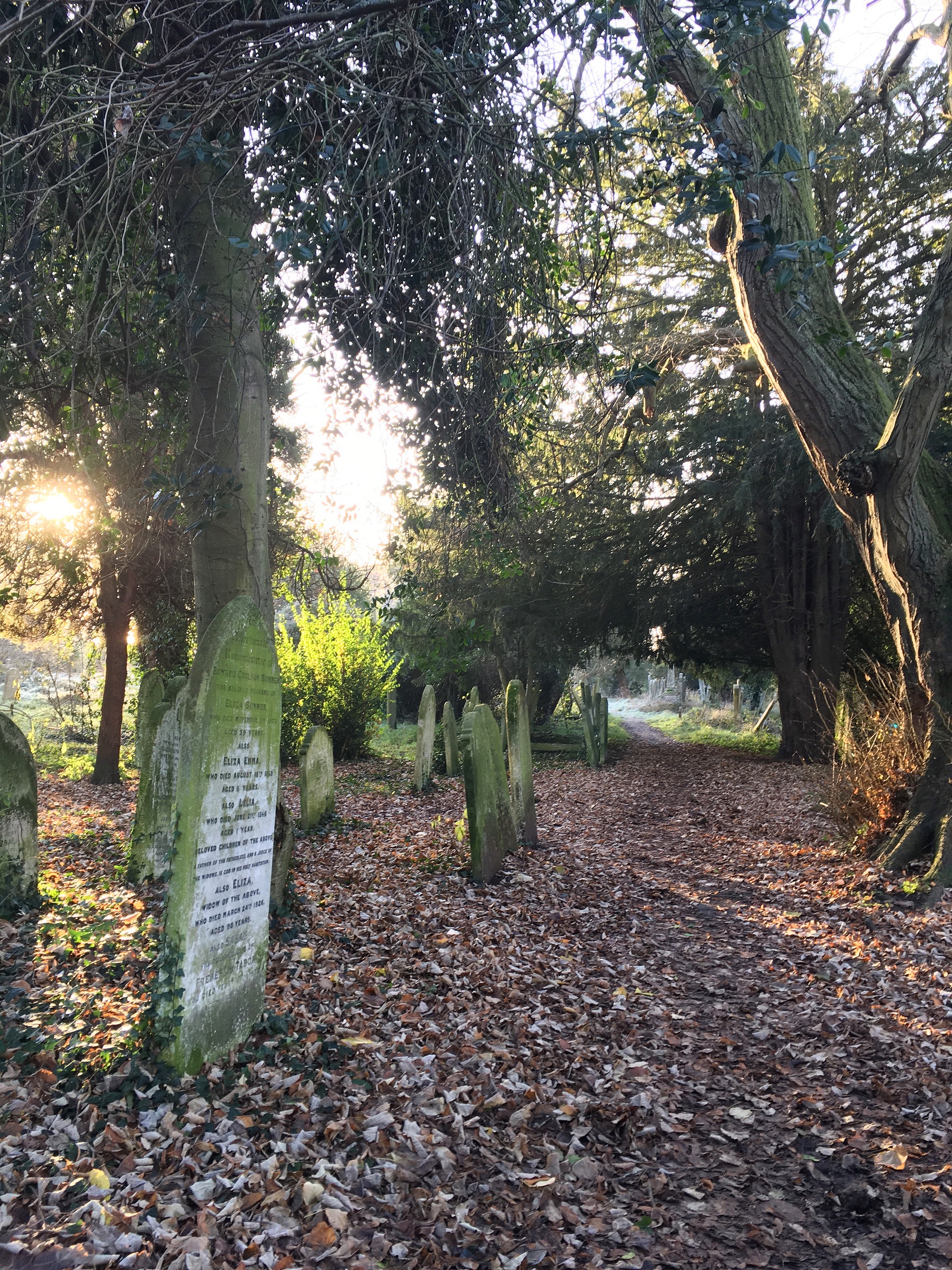 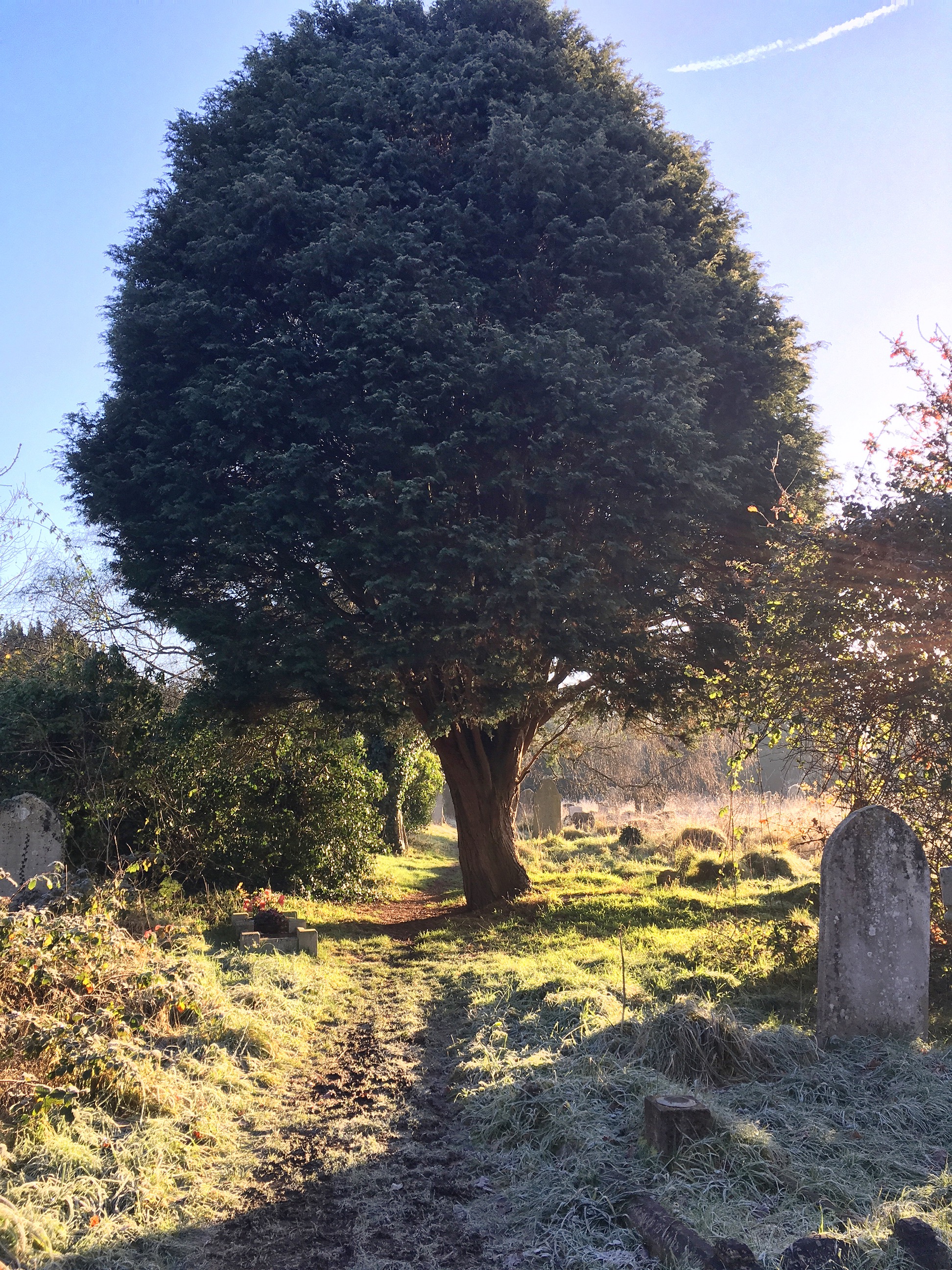 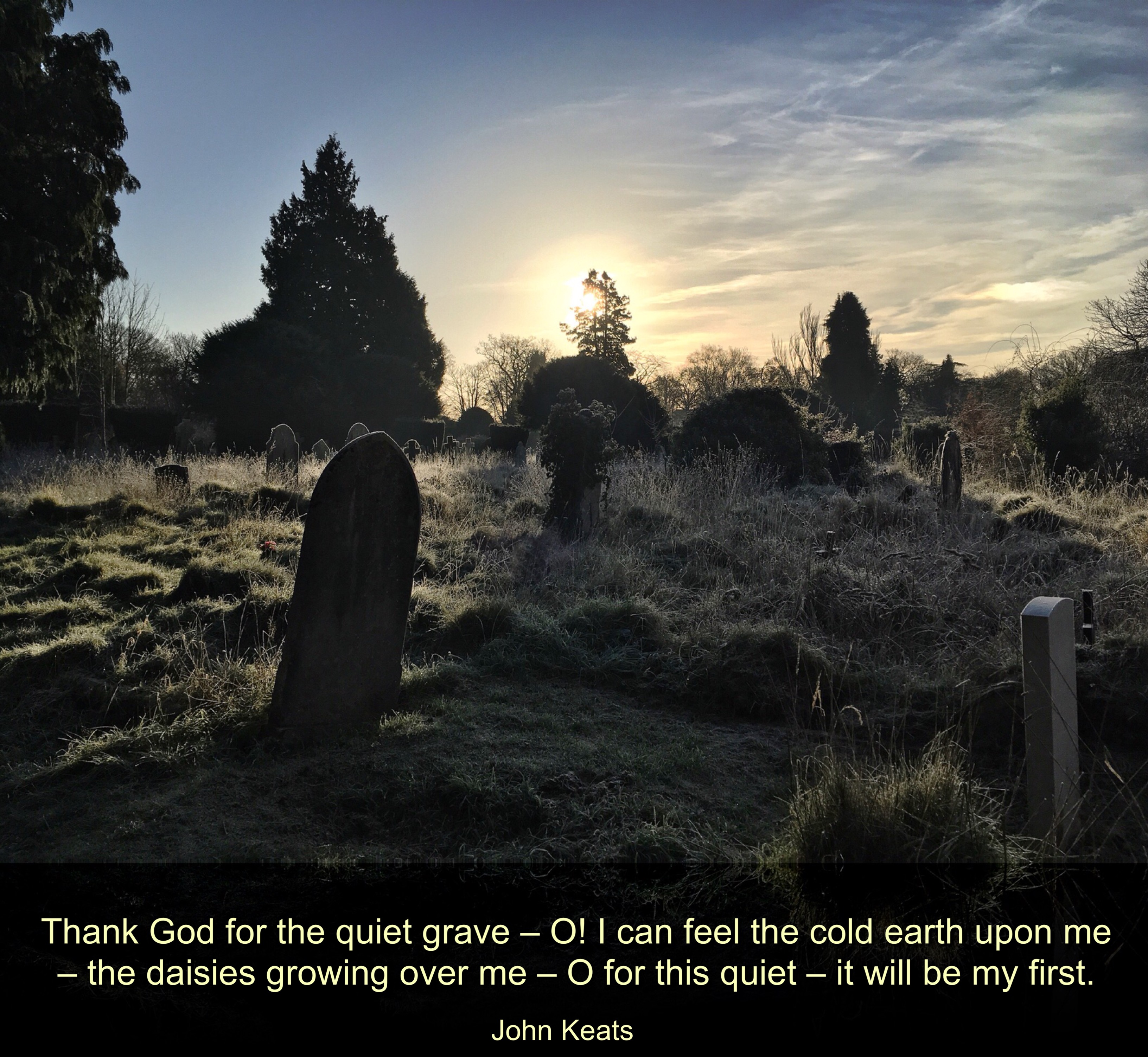 Eventually, the cold always wins and I have to head back to the relative warmth of the Common where the parkrunners are packing away the finish funnel and the signs ready for another week. There will be hot drinks to warm our chilly hands and lots of talk about the minutes and seconds taken to run the course. The two worlds couldn’t be any different. To the runners a second her or there can mean the difference between a good day or a bad, back in the cemetery, time has ceased to have any meaning at all. 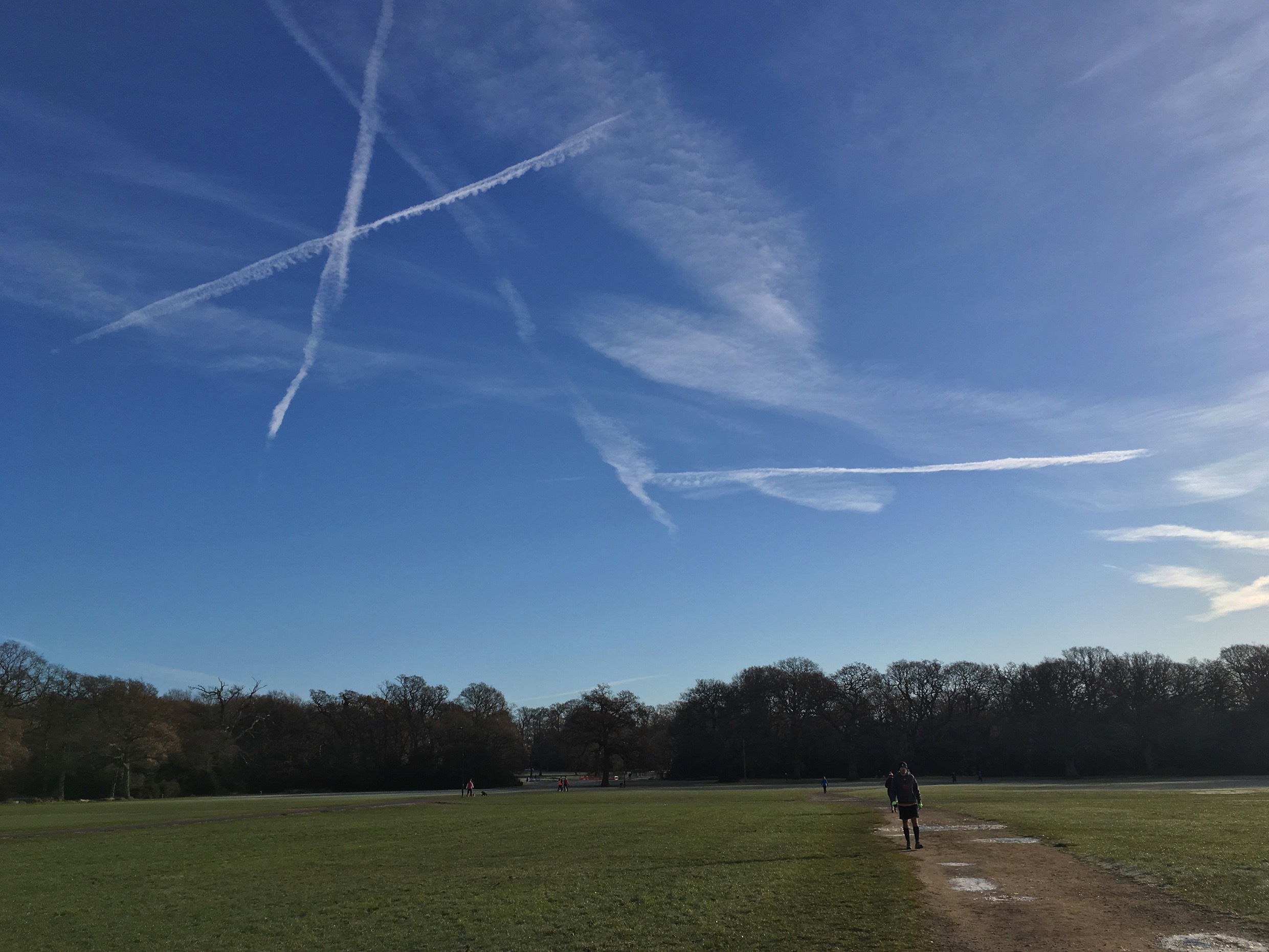 2 thoughts on “More tales from the old cemetery”