In the end the rain last night came to nothing much. We moved our chairs under Rob and Kim’s gazebo and sat sipping hot chocolate and eating peanuts waiting for the thunder to start. It was certainly humid enough for it and watching a storm under canvas might have been fun. As it was, there was just light rain for a while and the smell of warm dry earth soaking it up thirstily. It was all over before we went to bed.

For a while sleeping on the air bed in a sleeping bag wasn’t too bad, although the heat of the day had given way to a very chilly night and keeping warm was a problem. My leg ached but I’d taken some pain killers and tiredness from a long and busy couple of days made sleep come fairly easy. Sadly, it didn’t last. When I woke up it was pitch black and silent enough to tell me it must have been quite late. Commando was sleeping soundly but, try as I might I couldn’t get comfortable or warm enough to go back to sleep myself. The air bed seemed a lot less firm than it had when we’d gone to bed, which was a worry.

After a while I began to get concerned all my tossing and turning was going to wake Commando. He needed his sleep because he was going to be running for twenty four hours after all. As quietly as I could, I got up and left the tent. Outside the cold darkness enveloped me. There wasn’t a single soul about. By the dim light of the half moon I could just about see the row of portaloos on the other side of the field and the humps of the solo tents all along the edge of the course. Very slowly and carefully, I stepped over guy ropes and made for the empty grass. There was a pond somewhere behind the loos and I really didn’t want to accidentally end up in that so I walked in circles around the centre of the field, trying desperately to warm up, stretch out my leg and back and stop the pain. There may have been a little silent weeping.

About four or five circuits later I headed back towards our tent. At least I thought it was our tent. After a few false starts and a rising feeling of panic, I finally made out the shape of our car and behind it our tent. As quietly as I could I went inside. Once again I tried to get to sleep on the rapidly deflating air bed but it was useless. Commando stirred and I crept back into the awning part of the tent and sat on the hard ground. There was more silent weeping a little stretching and a lot of wondering what on earth I was doing here when I had a lovely warm bed at home.

Eventually, it began to get light. Just the merest hint of dawn through the canvas of the tent. For what must have been several hours I’d been sitting up, laying on the ground, stretching, trying to sleep, half snoozing, shivering, crying. Now, with puffy red eyes, I left the tent again, thinking to walk some of the course now I could more or less see where I was going. It might help my back and  leg and it would be better than the hard ground and trying to be quiet in the tent.

There was no one about, apart from security guards who eyed me slightly suspiciously as I passed them. Stiffly but trying to be mindful, I walked past the rows of tents, crossed a rickety board over a cattle grid and began to climb a stony hill away from the campsite. The air was still chilly and slightly fresh from the rain and, when I reached the top of the hill, morning mist was swirling across the golden fields below. The beauty of this misty dawn finally put a smile on my face. What I should have done was take a photo but my head was fuzzy from lack of sleep so I just kept on walking.

Slowly but surely the pain in my leg and back began to ease a little as I followed the course markers along a grassy trail on the high ridge. Despite the rain the earth was as hard as iron and a long, jagged crack ran, almost unbroken, along the middle of the trail, as if the hill was about to split in two at any moment. Over an old stone wall I could see the misty fields beyond and, finally, I remembered my phone in my pocket and stopped to take a picture.

Soon the course markers led me into the woods and I recognised the crossroads where I stood taking photos of the runners last year. A camper van and gazebo ringed with fairy lights marked the spot where the marshals were sleeping. It looked quite magical in the dark wood but I crept past as quietly as I could. They might not be running but twenty four hours of solid cheering is almost as hard and the marshals deserved their rest.

The woodland trail was mostly marked by lines of white tape so it was easy enough to follow, even though it was darker in the trees. The ground here was badly rutted and filled with lumps, bumps, roots and holes though so I had to carefully watch my feet. After a while the trail turned back on itself and I got my phone from my pocket to take a picture of the marshal’s camp in the distance as I approached it. As it was so dark I wasn’t expecting much but what happened was very strange. As I snapped the shutter and looked at the small screen I noticed an odd misty substance rising from the ground. As far as I could see there was nothing on the trail in front of me and this substance was only visible on my phone screen. 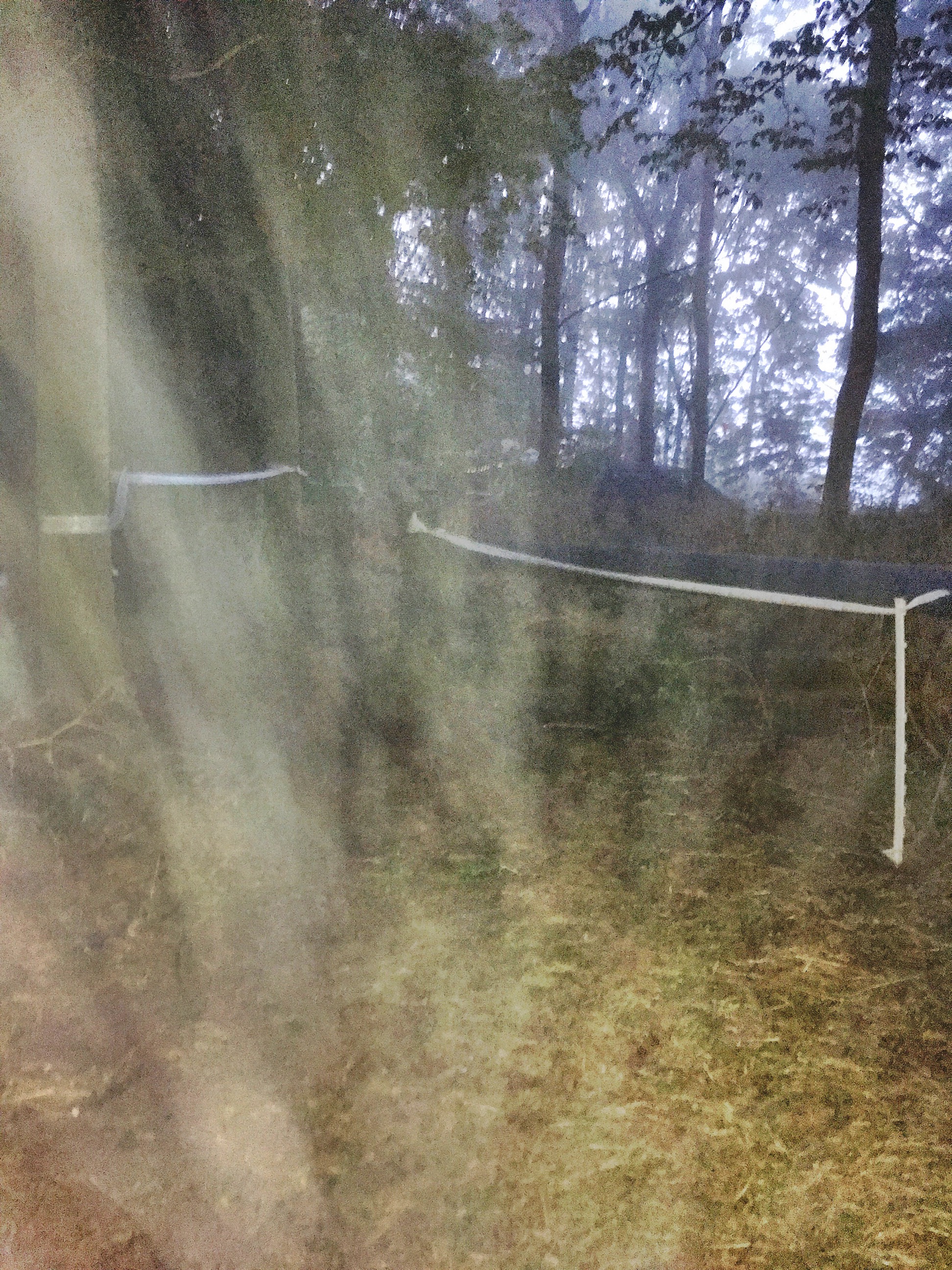 Thinking it might be an odd anomaly on the phone itself, I took one more shot. The exact same thing happened. On the screen and in the resulting photos, something ephemeral was rising from the ground in front of me in a steady stream. Looking with my eyes though, there was nothing there at all, not even the merest hint of mist, no dust, no breeze, nothing at all on the ground that I could see. Either the camera on my phone was broken or there was something very strange going on in the woods.

Puzzled, I took a couple of steps forward and took another photo. This time there was no mist, just a shot of the winding trail ahead and the lights of the marshal’s camp through the trees. I don’t mind admitting I was more than a little spooked and I didn’t hang around to find out more. 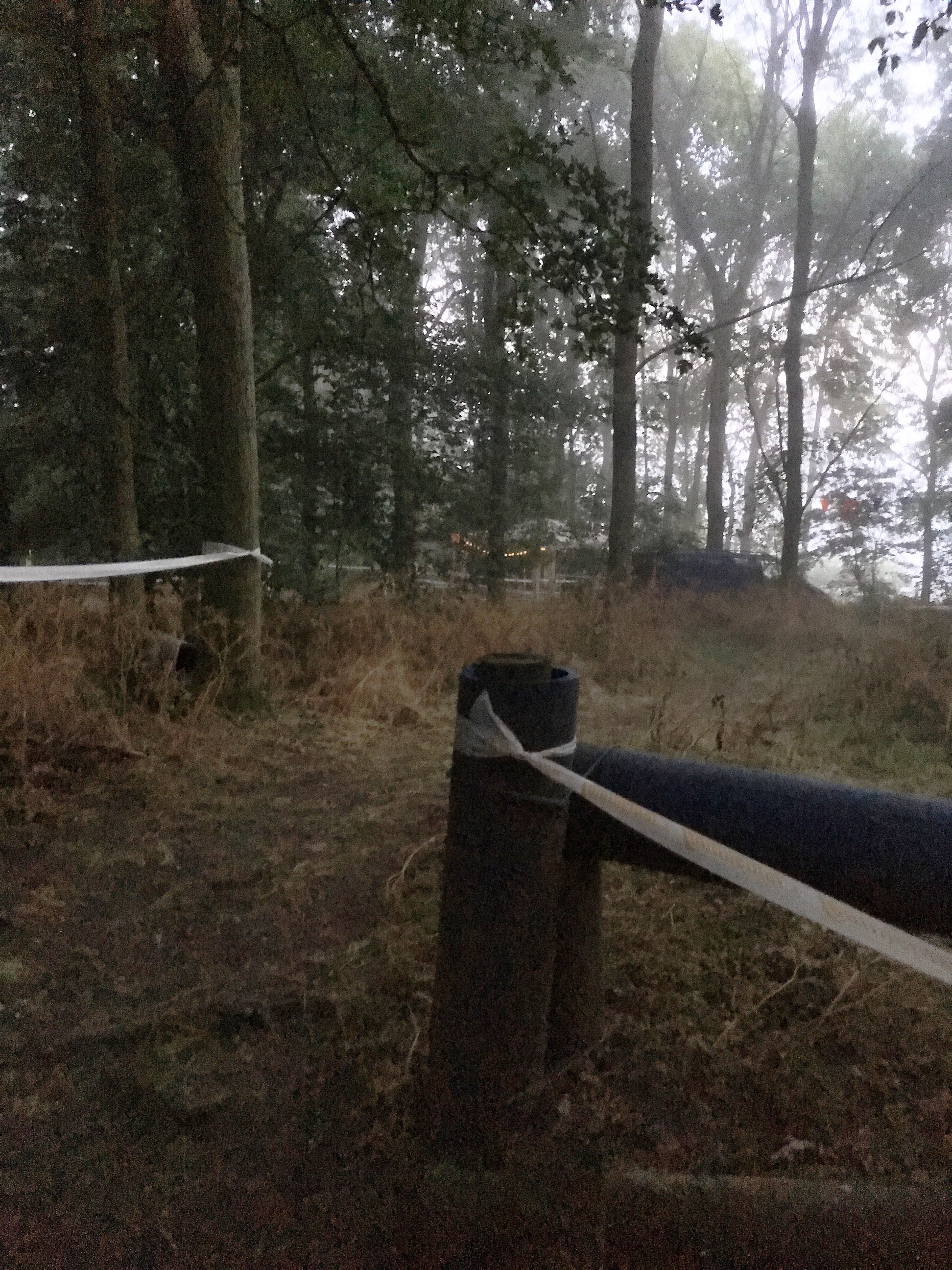 Once I was far enough away from the curious phenomena to feel safe again, I took one more photo of the trail ahead. In part this was to check that my phone camera really was working properly and in part to try to capture just how uneven and rutted the trail was. Technical is the term cross country runners use for this kind of difficult terrain and this was technical in the extreme. 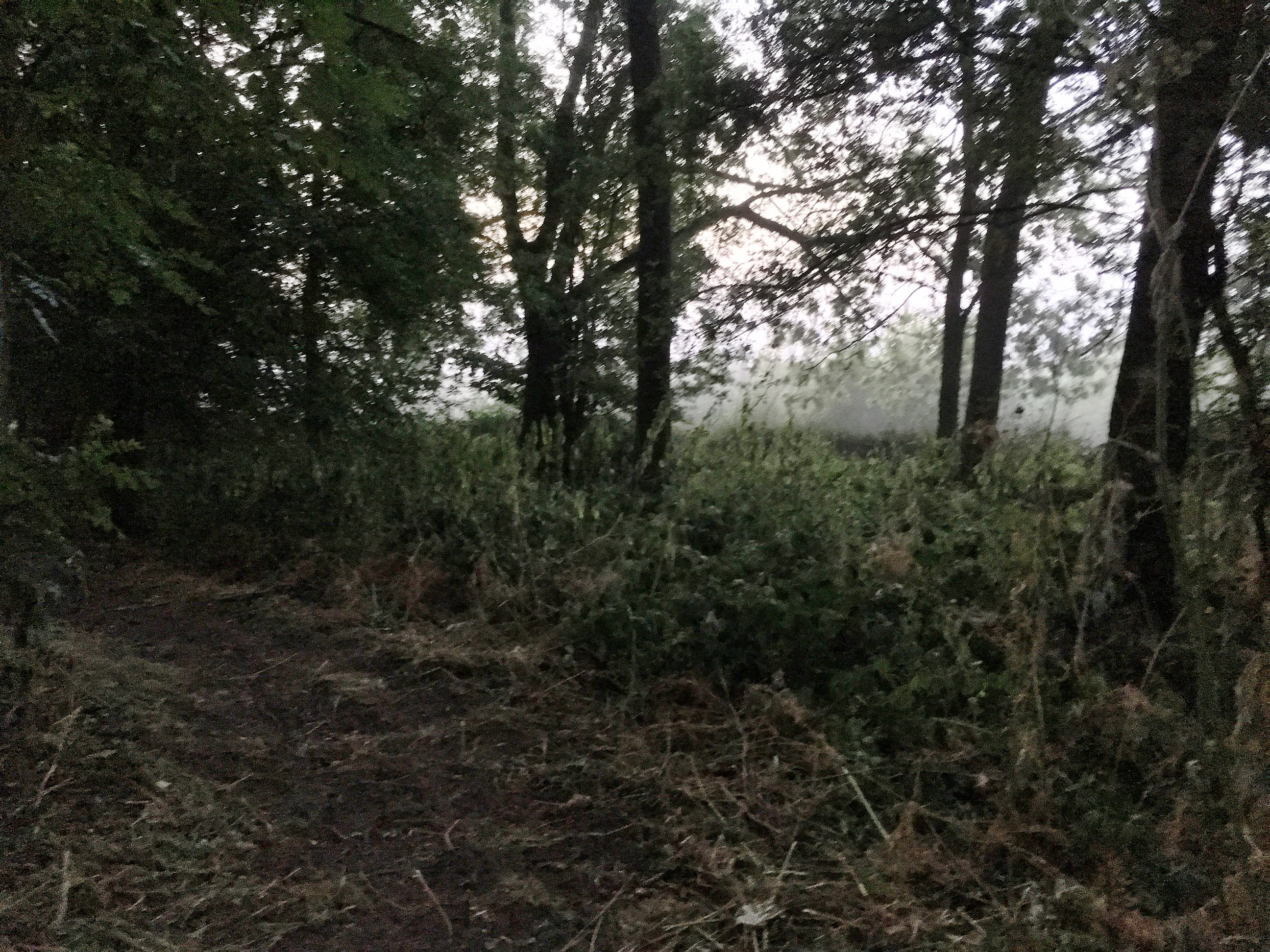 After a couple of trips on exposed roots the  wisdom of walking alone through the woods in the semi darkness began to seem questionable. Luckily I stayed on my feet both times but I put my phone back into my pocket just in case, slowed to a crawl and concentrated on my feet. It was a relief to get out of the woods and back onto the open grassy hillside. The grass was damp from the morning mist. Beneath it there were almost as many ruts and holes as there had been in the woods but at least there were no roots or brambles to trip me.

With no real plan, other than to keep walking, I carried on following the race route along the top of the hill. Below me the campsite was still silent. Ahead I knew the course looped around a lake before turning back towards our little campsite. I was quite looking forward to the lake but, in the end it wasn’t to be. Two things made me turn back. One was the imminent prospect of plunging back into the darkness of the woods, not far from the place where I’d photographed the peculiar phenomena. I figured I’d pushed my luck quite far enough on the tripping over roots and ghostly happenings front for one day.  The second was slightly more mundane, a pressing need to go to the loo.

So I headed back down the hill towards the nearest portaloos and from there back to the camp. There was a long day and night ahead, I’d had hardly any sleep and, for now, I needed to rest.