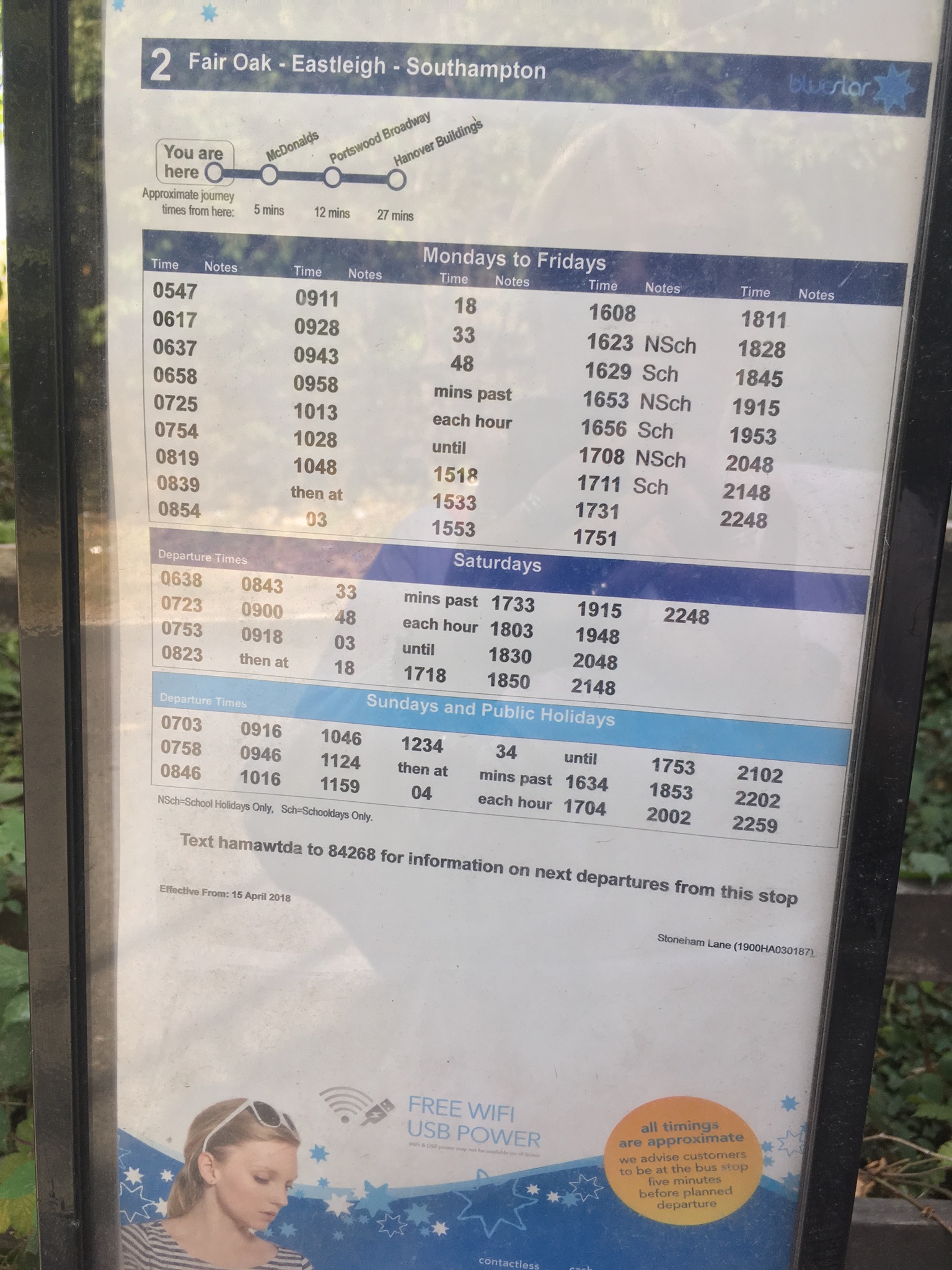 Every session at the Running School seems to be harder than the last and my fourth session was no exception. It wasn’t helped by the extremely hot and longer than planned walk to get there. It seems that, no matter how much I practise the exercises at home, Paul always comes up with something new to torture me.

Today the glute bridges, once my least favourite thing, seemed positively easy when compared to the single leg squats added at my last session. Even the backwards treadmill walking didn’t seem too bad, apart from when Paul set the treadmill speed a little too fast and I couldn’t keep my rhythm. Right when my legs had turned to jelly from another set of killer single leg squats Paul decided the time was ripe for his latest punishment, walking lunges.

“We can do them outside if you like or in the room upstairs?” he said.

As it was far too hot outside I plumped for the room upstairs. At least only Paul would be there to bear witness. Walking lunges are not a new thing for me but I’ve never been all that good at them. Today there was nowhere to hide and no half measures. Paul made me lunge up and down the long room, lower and lower until I thought my knees were going to explode and every muscle in my legs was burning. Then, of course, I had to go back down the stairs, this was when I discovered my legs had actually turned to jelly and I had to hold onto the bannister just to stay upright. Of course, he wasn’t finished with me. After the briefest of rests it was back to the single leg squats although, suddenly, they didn’t seem nearly as bad. Finally, time, my enemy all morning, was on my side and my hour was up. Now all I had to do was get home.

From the bus timetable I’d looked at earlier, I knew there was a bus due at eighteen minutes past the hour. The walk from the Running School to the road takes about ten minutes so, even after stopping to refil my water bottle and make my next appointment, I was fairly confident I’d make it in time. Just in case the bus was early, I walked as fast as my tired legs would carry me, towards the bus stop. When I arrived I realised I had a good nine minute wait. There was nowhere to sit and although the bus stop had been in the shadow of some handy trees when I passed earlier, the sun had moved and so had the shade.

Standing around after a tough workout is a recipe for stiffness so, for a while, I stood, hopping from foot to foot, and peering hopefully along the road. Maybe I’d be lucky and the bus would be early or the three minutes past bus would be late. The road remained empty and I got hotter and hotter. When I looked at my watch again only two minutes had passed. Then I started to think about how far I could have walked in the time I’d been waiting. After a few sips of water and another hour or so of waiting, I looked at my watch again, two more minutes had passed. Now I began to wonder exactly where in Southampton the bus ended up, how stiff I’d be by then and how far I’d have to walk to get another bus home. Suddenly, getting the bus didn’t seem like the great idea it had earlier, especially as I’d have to pay for the privilege and would almost certainly get home quicker on foot.

There were still five minutes before the bus was even due and, while I’d been dithering, I noticed a few clouds had appeared in the sky. This was when I decided walking home was the most sensible option. It was still hot as I walked back across the field that will soon be a car park but the clouds were slowly gathering. By the time I’d passed under the Stoneham Road Bridge, the sun was hiding behind a thin cover of cloud. Rather than walk around the edge of the field, this time I thought I’d try a short cut and walk straight across. As it turned out the trail wasn’t as straight as it looked so I’m not entirely sure I really gained anything. 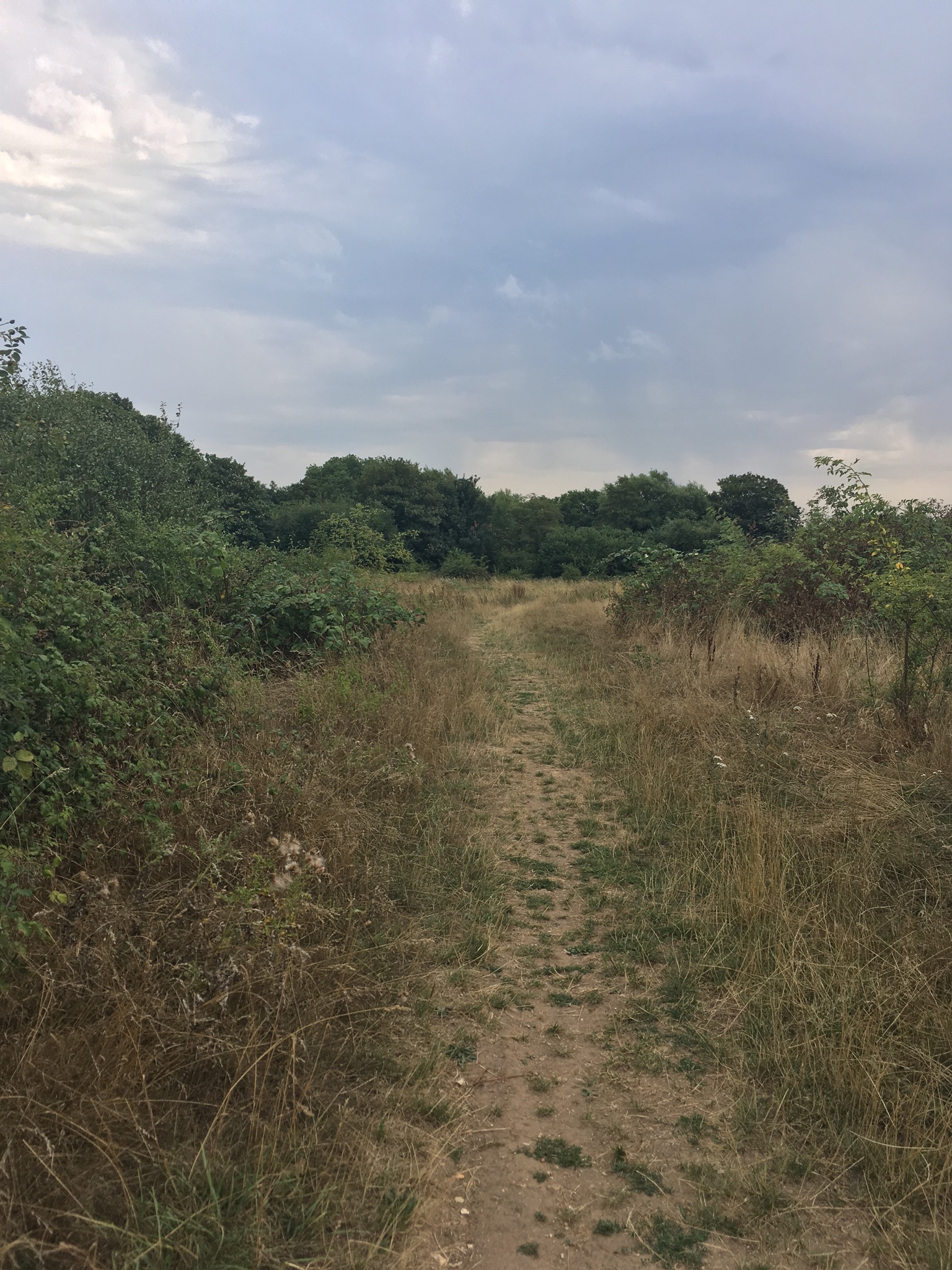 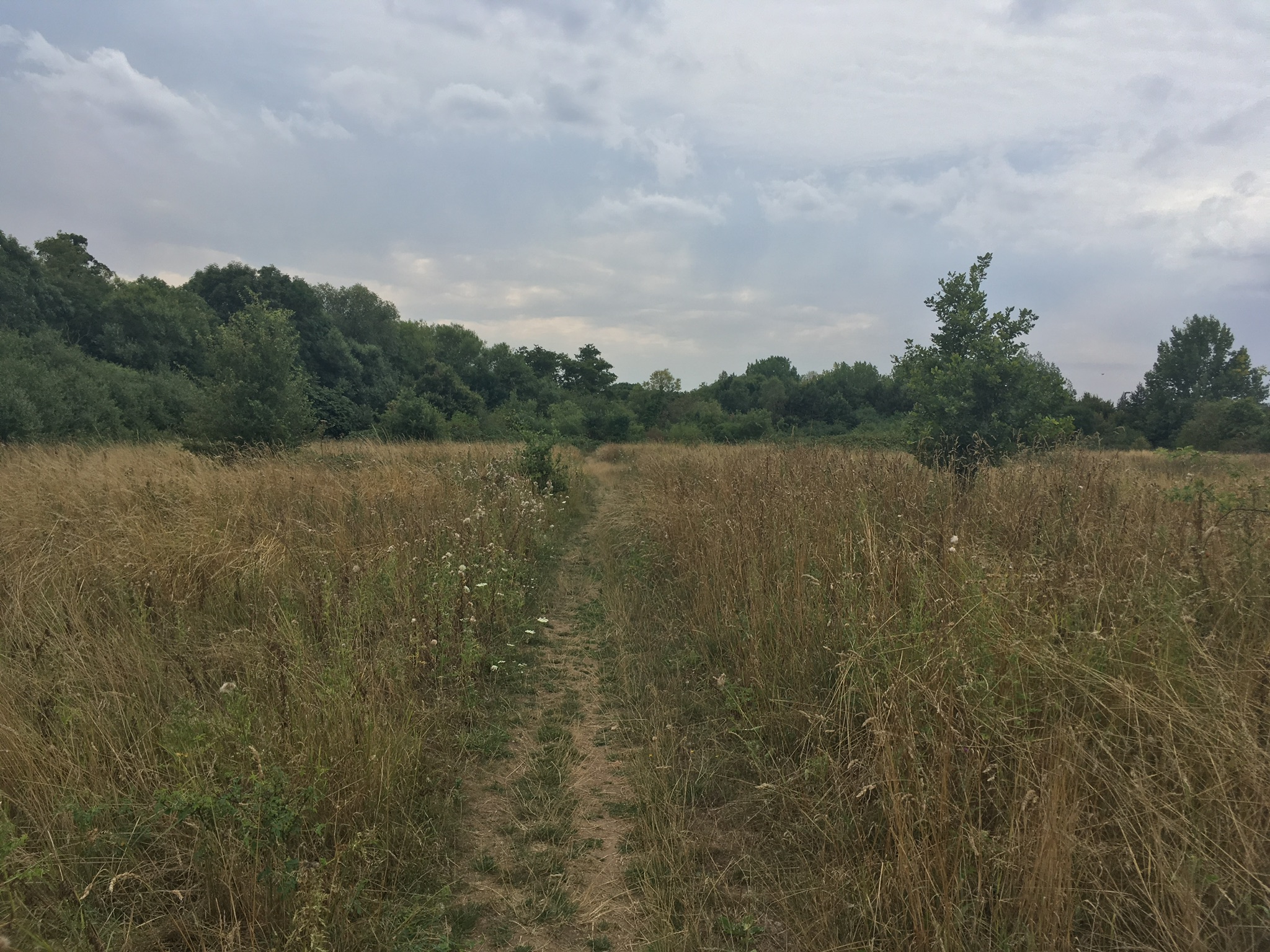 One of the advantages of the walk home is that all the steep upward climbs on the outbound journey were now nice downhill slopes. The other advantage was I had no need to hurry. As I crossed the bridge I spotted some shelf fungi in one of the trees overhanging the brook. With no need to rush I leant over the railing and took a picture. 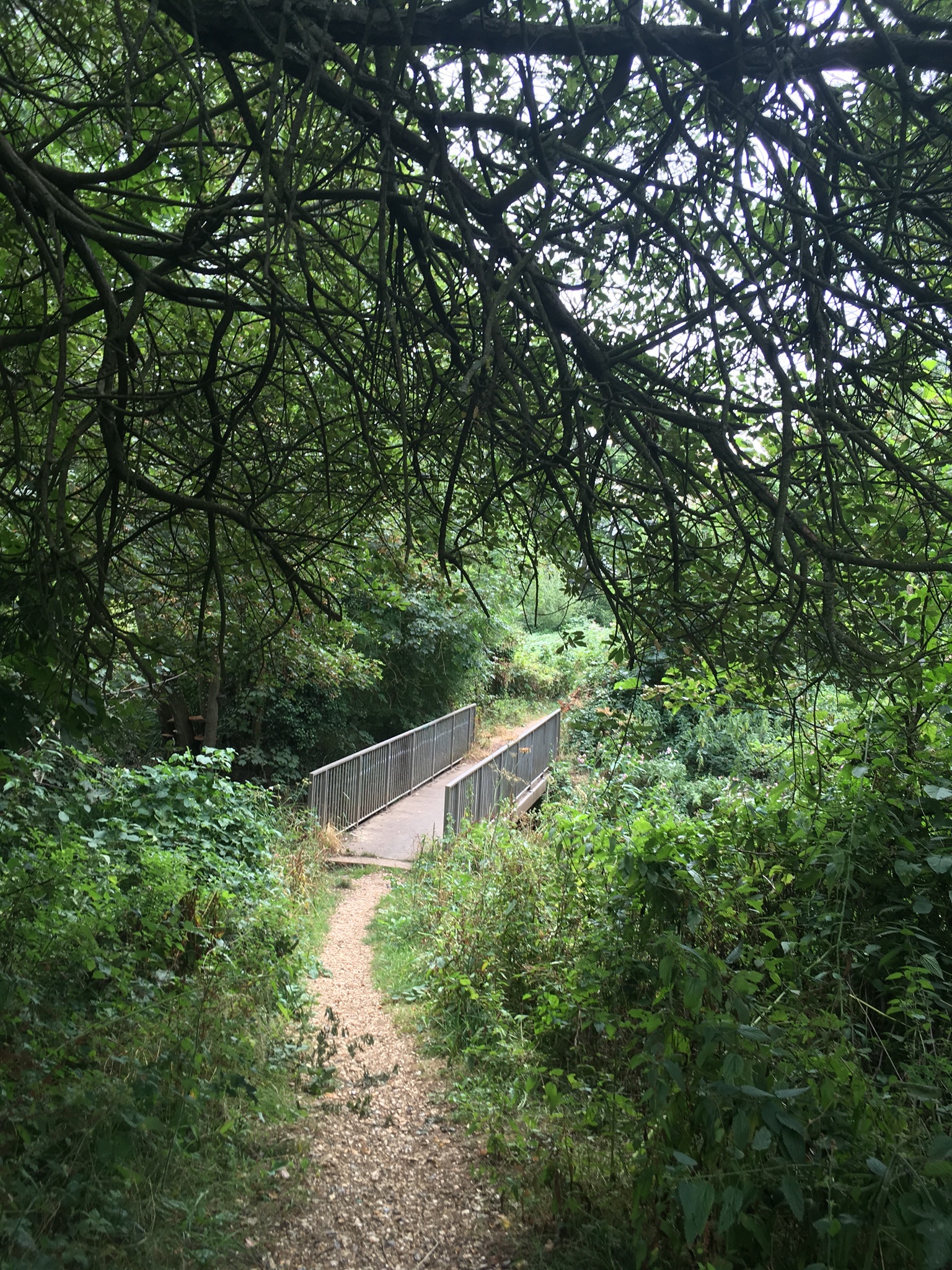 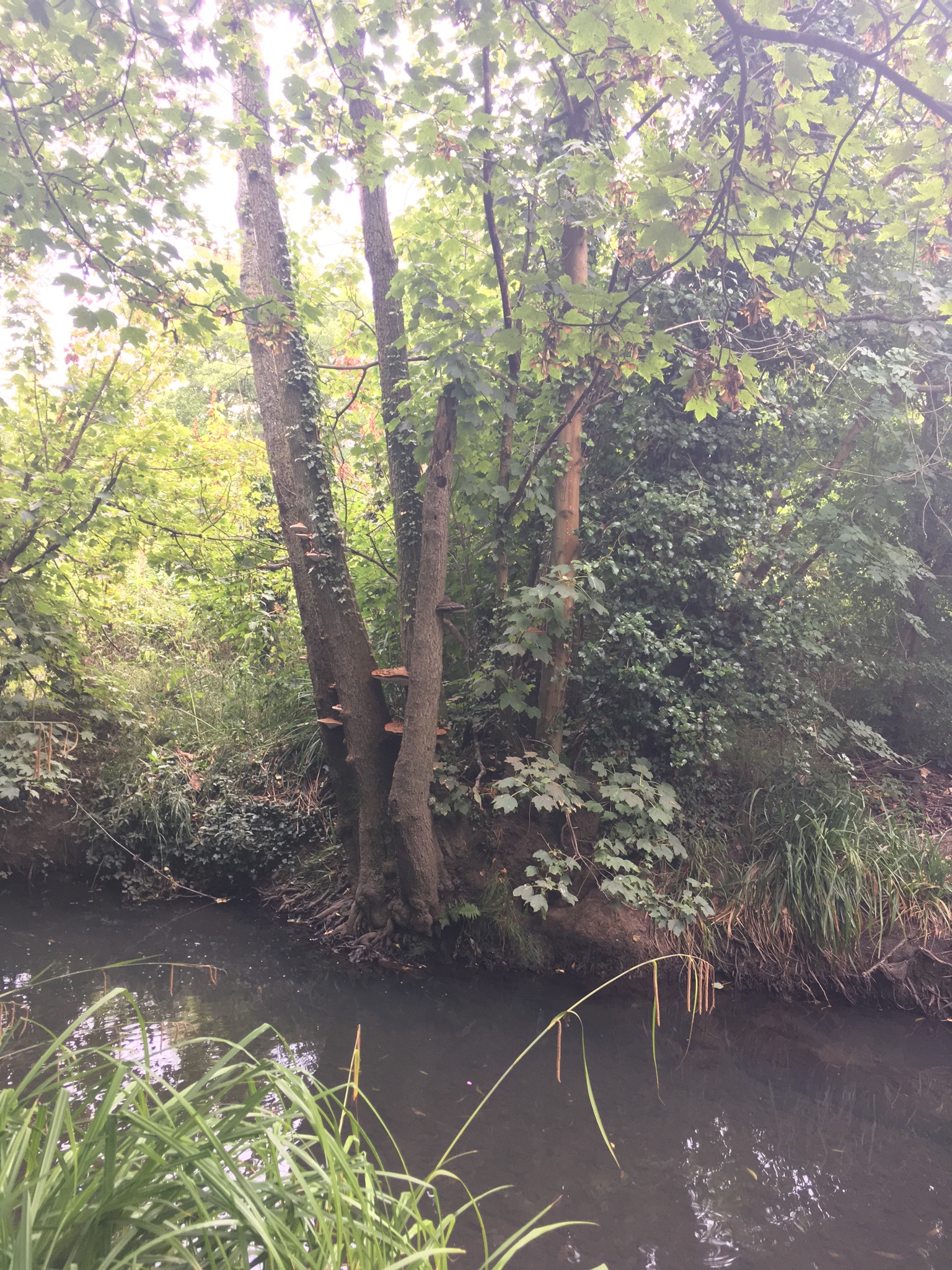 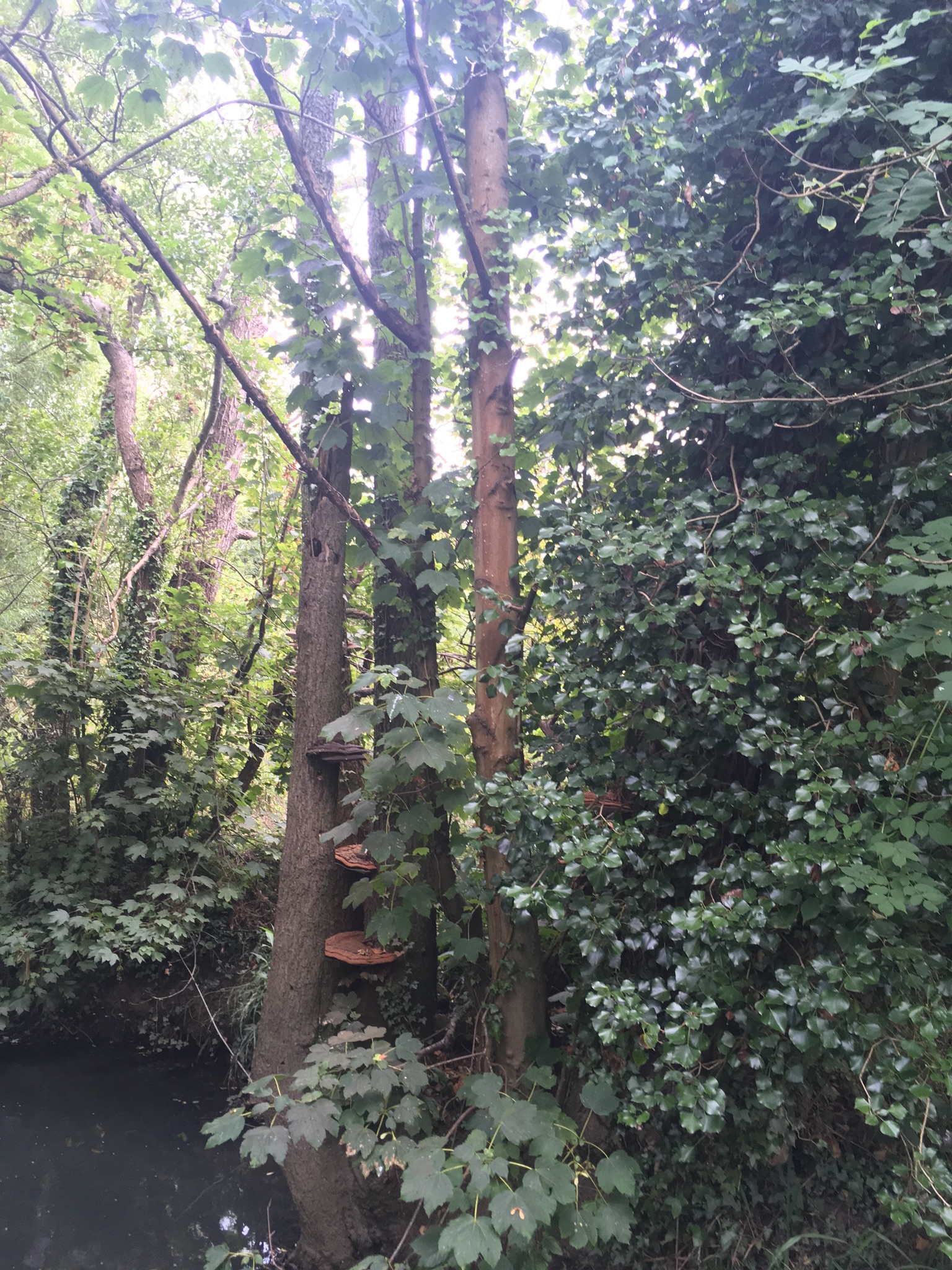 Along the shady trail beside the brook I strolled slowly, thinking about the route home and places I could shave off a little distance. The water under the trees was covered with a film of fallen leaves, almost as if autumn had already arrived. The poor trees, are suffering so much from the lack of rain and the hot sun they are losing their leaves early. 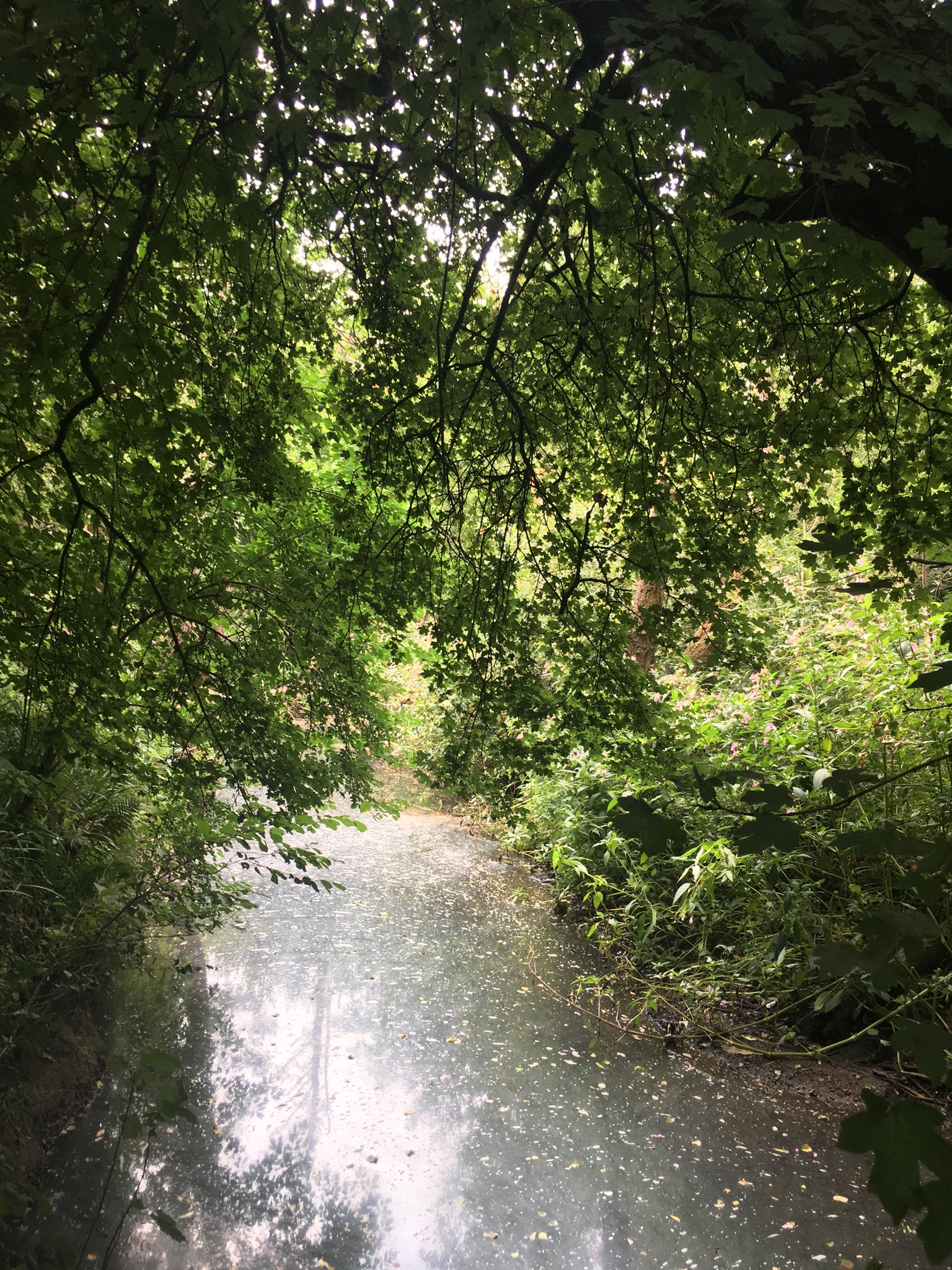 Before I knew it I’d reached the railway arch. On the other side I could see from the expanse of mud at the edge of the water just how far the brook had receded. At this rate there will be no brook at all if we don’t have some rain soon. 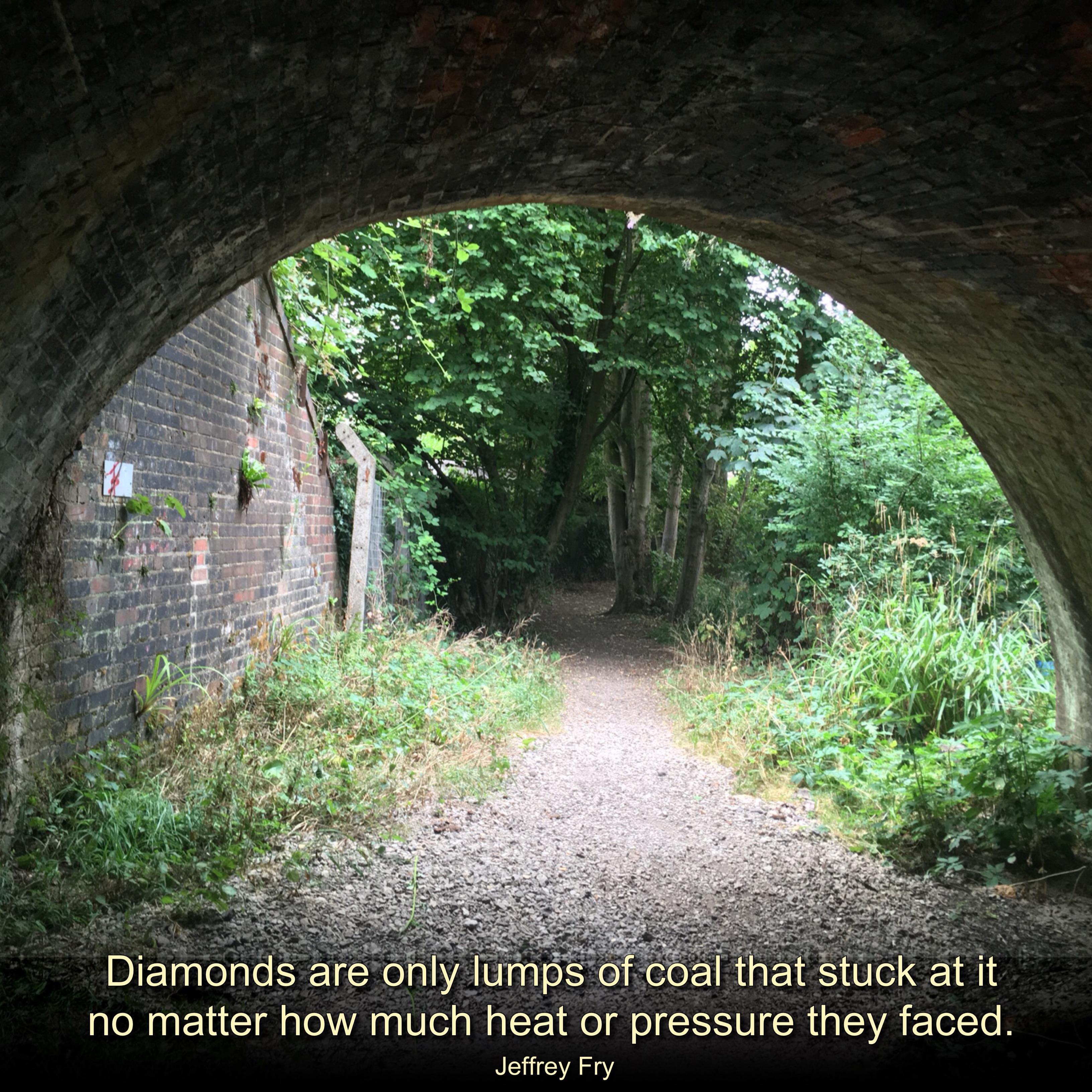 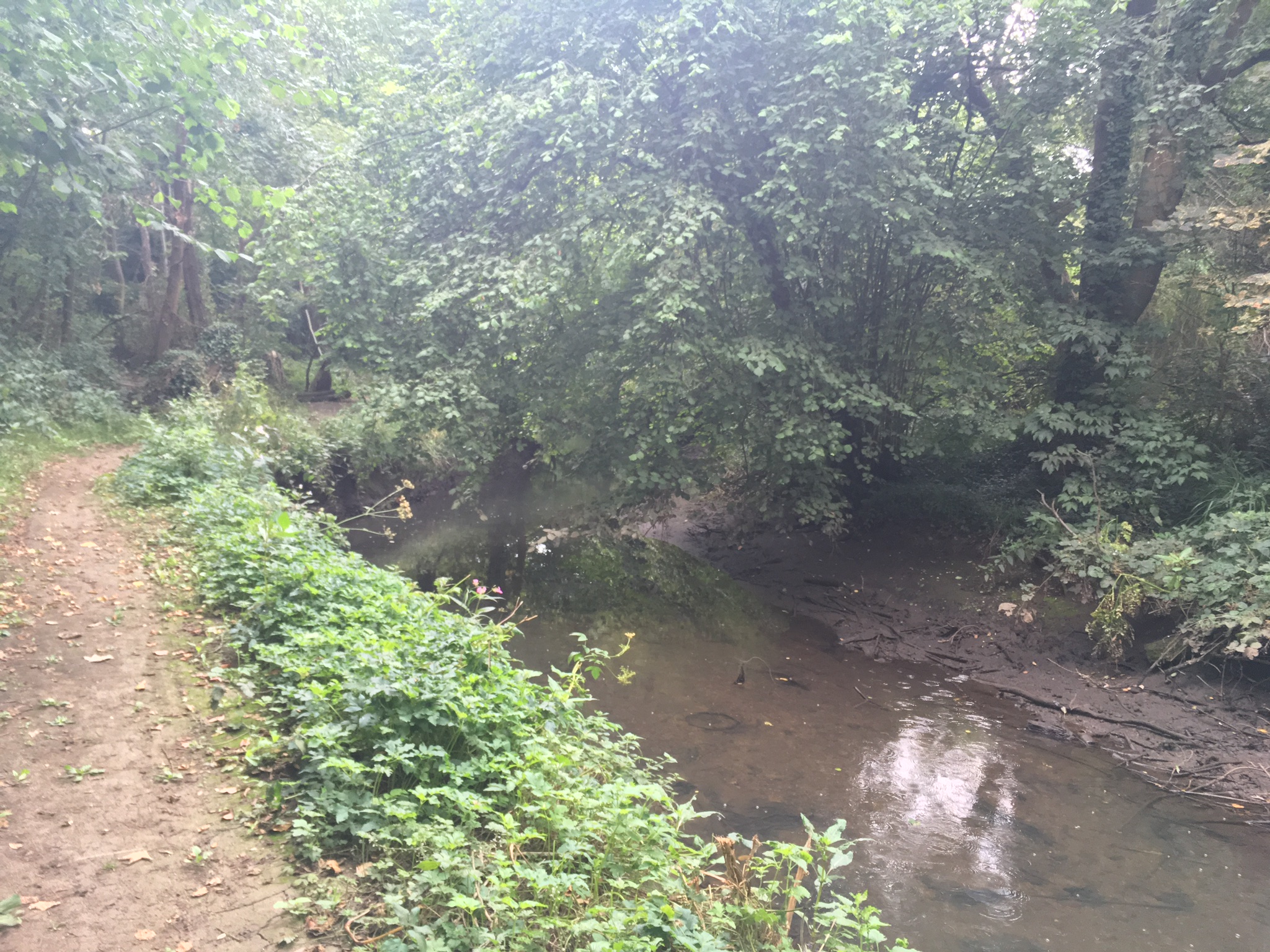 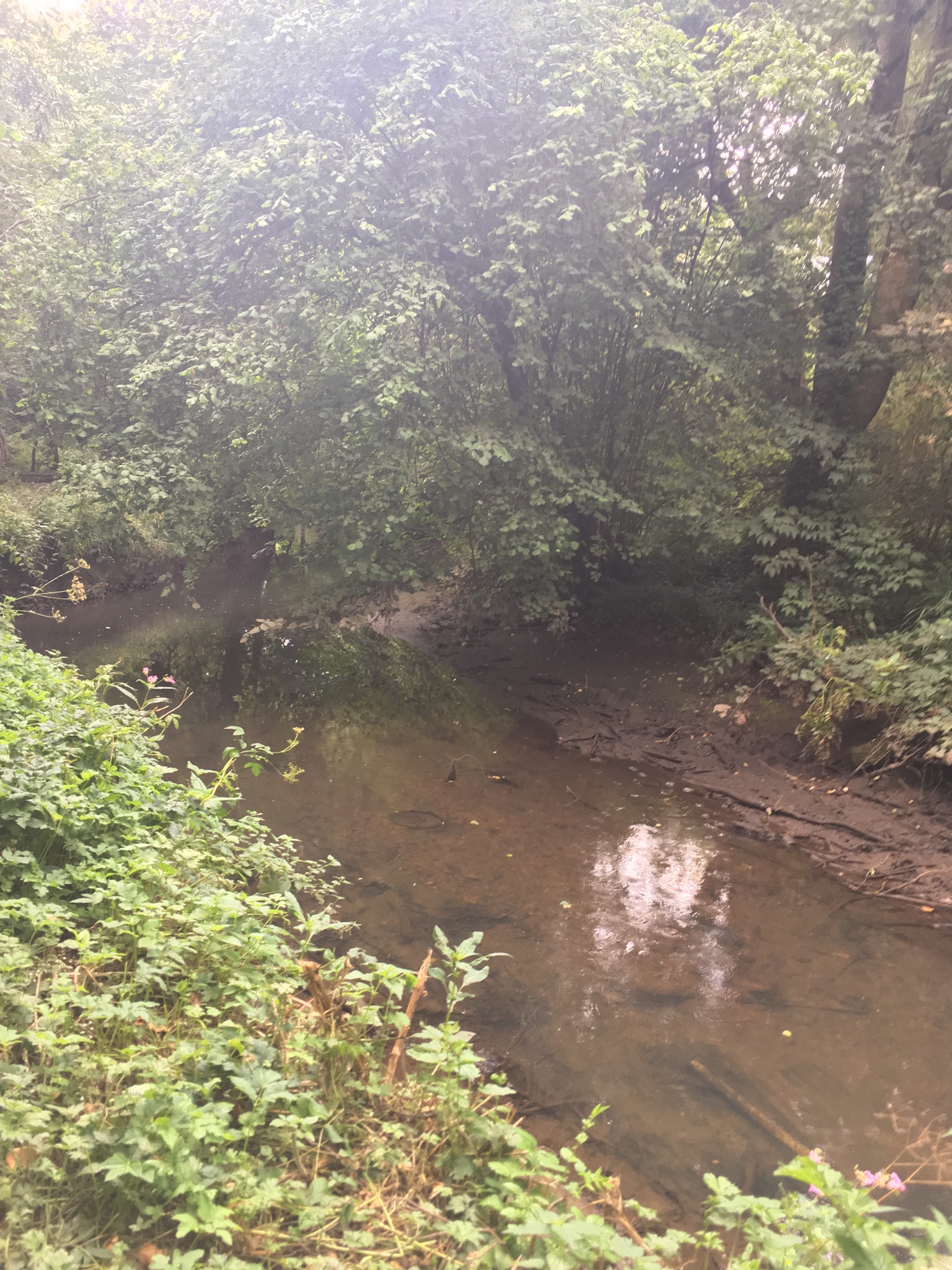 Across the road I followed the brook back past the mushroom sculpture towards the green bridge. There were some more interesting fungi on a tree near the bridge and, again I stopped to take a picture. By this time I was feeling more than a little tired and I still had around two miles to walk. 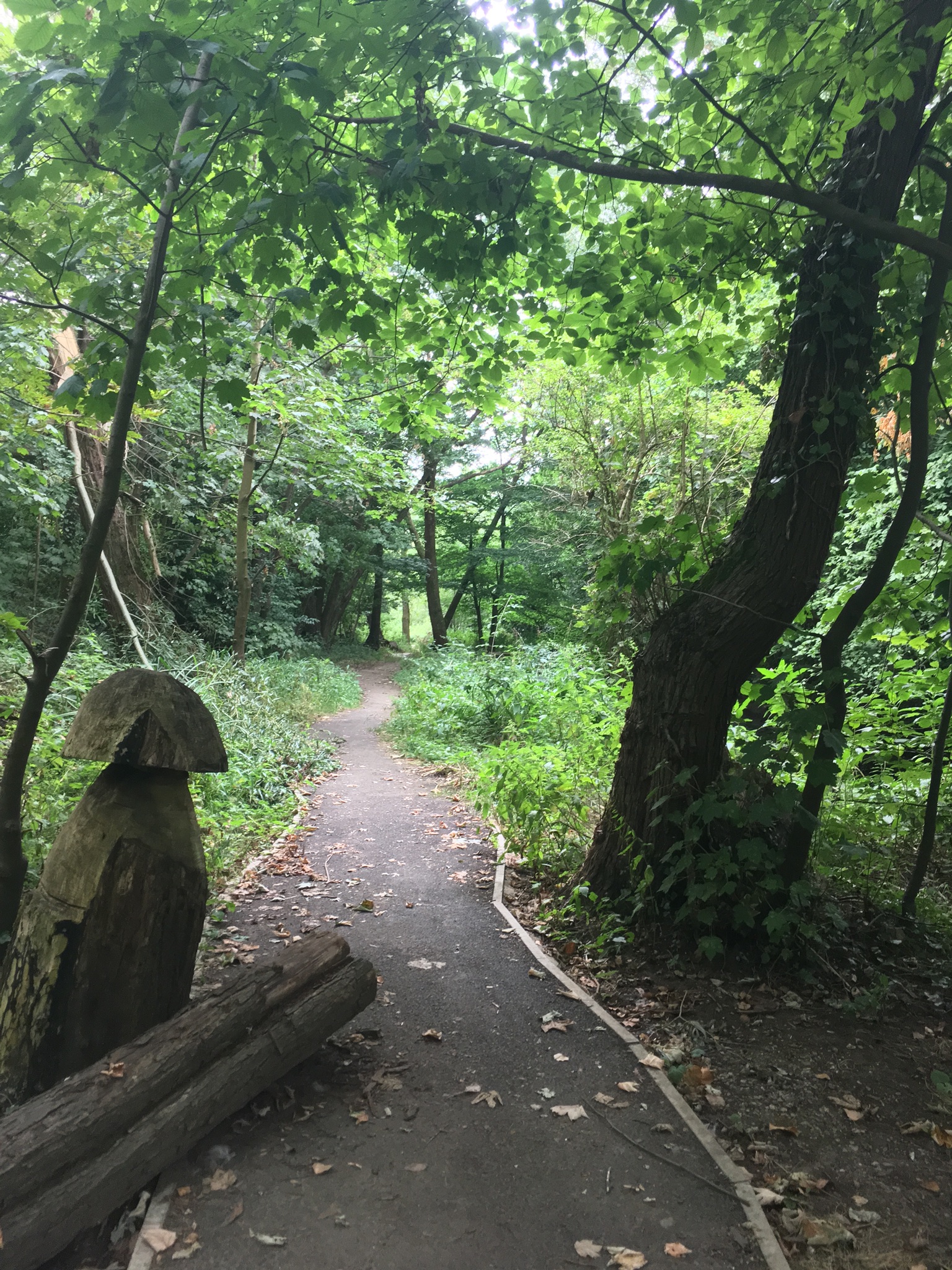 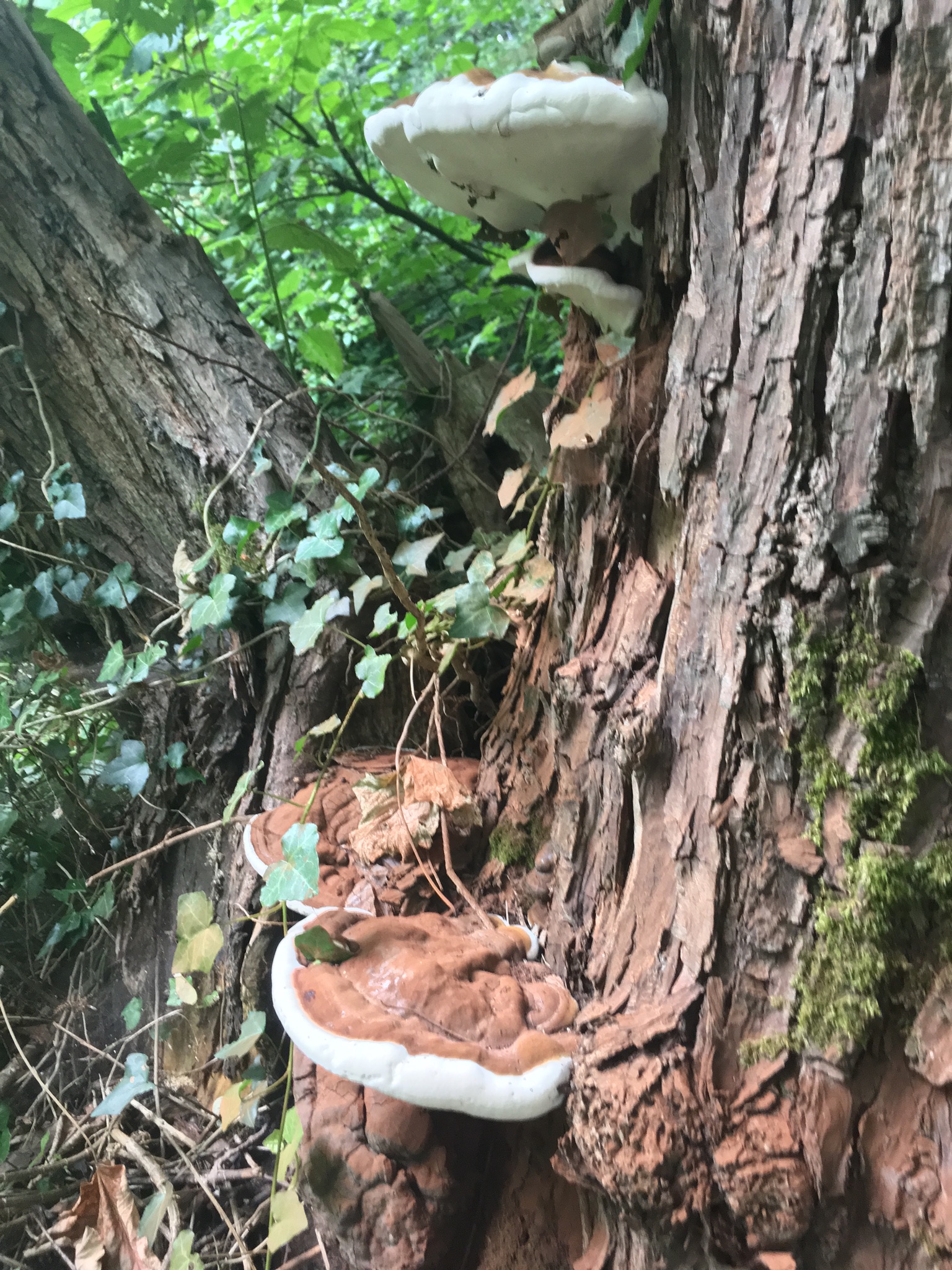 Those miles seemed to take an eternity. The clouds may have stopped the sun from burning me but it was more humid than ever and every step was an effort. When I reached Woodmill I passed the fair then took a shortcut across the grass. This barely saved me any distance to speak of but, when I finally saw Cobden Bridge ahead, it was a real relief. 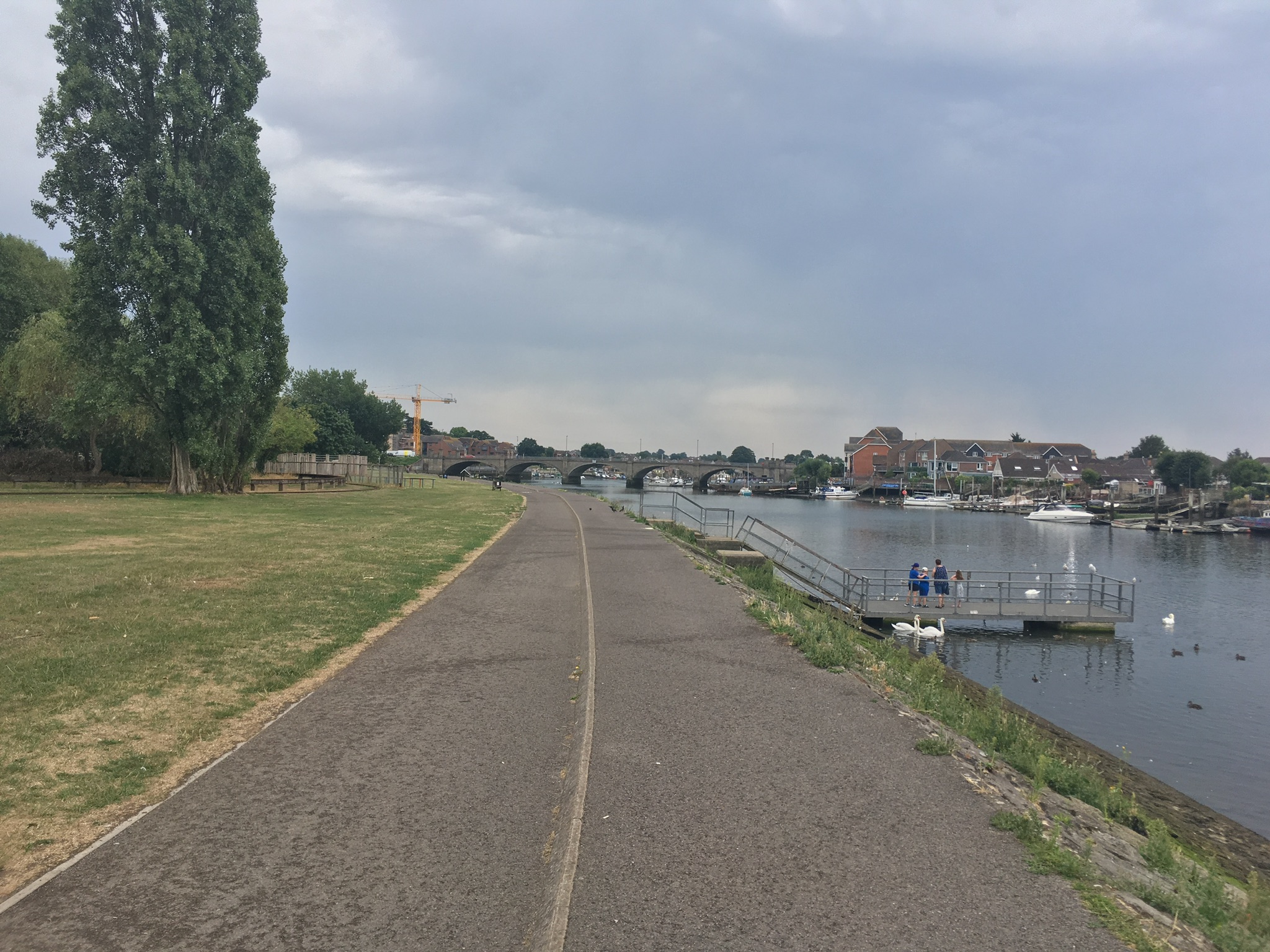 The three and a half mile walk home felt more like a half marathon but at least I kept moving and I made it home without my legs seizing up. Of course tomorrow is another story and I have the feeling I’m in for some world class DOMS. Then again, it wouldn’t be a Running School session without a little muscle soreness afterwards. 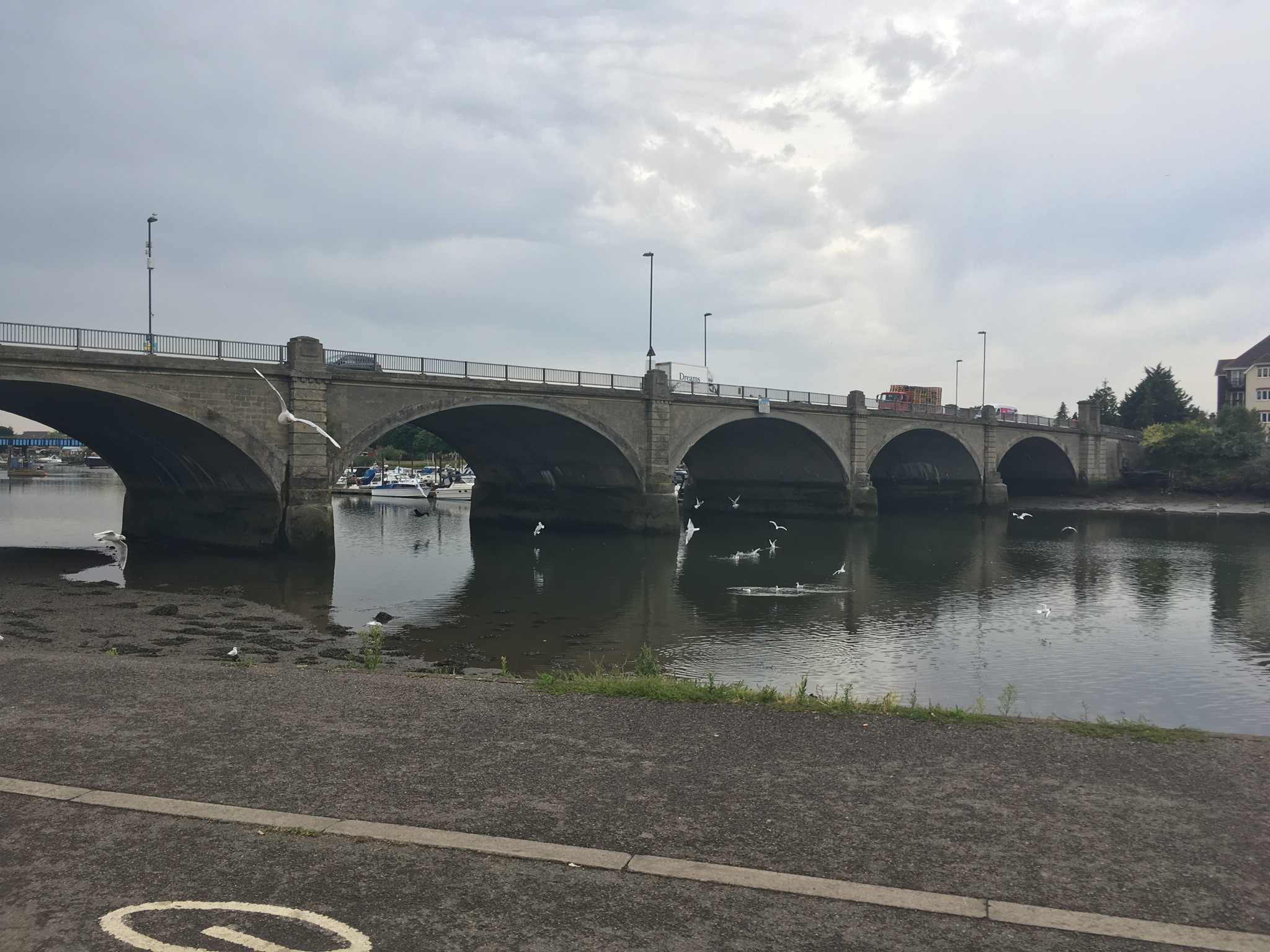 2 thoughts on “Four of six at the Running School”