There was no sign of the fast boys by the Pyramids when I got there. It was still a little early and running is not an exact science so I wasn’t overly worried. Knowing they’d be back fairly soon, I didn’t want to stray too far but, right next to the Pyramids, is Southsea Rock Garden, the perfect place to while away the time.

The Rock Garden is a great place to get away from the biting sea air on a cold day or to get some shade in the heat of summer. In my time I’ve done both, although today was neither too hot or too cold. It’s not large but the winding crazy paved paths and hidden benches make it a quiet spot, even when the rest of Southsea is teaming with people. Since my last visit a rather grand, arched entrance arch has been installed. This was, I’m told, designed and made by local blacksmith, sculptor and artist, Pete Clutterbuck. His arch certainly makes a statement and the golden lettering stood out beautifully against the deep blue sky. The gardens were created in the 1920’s  under a government ‘back to work’ scheme following World War I. Rocks were transported from Cumberland and a team of out of work local men set to work turning a gorse covered piece of foreshore into a beautiful garden. As some of those men were almost certainly fresh from the trenches in France and Belgium, I’m sure they found it a pleasant change of scenery. Due to its proximity to the sea evergreen shrubs, alpines and plants able to cope with salty air were chosen and a wattle fence was built to protect the young plants. The little garden soon became popular with both locals, many of whom had no gardens of their own, and tourists alike. Holding back the tide and protecting the plants has not always been an easy task. There have been several floods in recent years with the tide crashing into the gardens and wreaking havoc. Inevitably there have been some horticultural casualties but the gardens have recently been replanted with salt resistant species. This year lack of water has been the main problem, as it has been everywhere in the country. Sadly, the gardens have suffered and today there were not nearly as many flowers as I’d hoped. In fact some were looking decidedly withered and the grassy areas were very brown. With all the quiet areas and the sound of the sea as a backing track, this is a wonderful place to sit and meditate, although, today, I wasn’t doing any sitting. As I wandered along the paths I saw a few other people lost in contemplation along with a couple of other walkers like me. On one grassy spot a group of people were having a yoga lesson in the sun. Mostly though, I was alone with my thoughts. Like Southampton, Portsmouth and Southsea were badly bombed during World War II but the little rock garden was one of the first things to be renovated once the war was over. The entire garden was replanted with evergreen and alpines.  With so much horror and devastation around I suppose the people needed something beautiful to enjoy. In the 1950’s lighting was added so people could walk in the gardens even after dark. The gardens are tended by one full time gardener and a team of volunteers, the Friends of the Rock Gardens. This year they have had their work cut out. Amongst all the desiccation there were a few bright floral spots. Some rather beautiful pink lilies caught my eye along with a clump of michaelmas daisies and some fat little fleabane. The sounds of water do not all come from the sea beyond the garden fence. There is a small pond with a cascading waterfall on the landward side of the garden. Steps lead up to the top part of the pond where a small fountain, half hidden in a clump of reeds, starts the water tumbling. There are even fish in the top pond if you care to look for them. 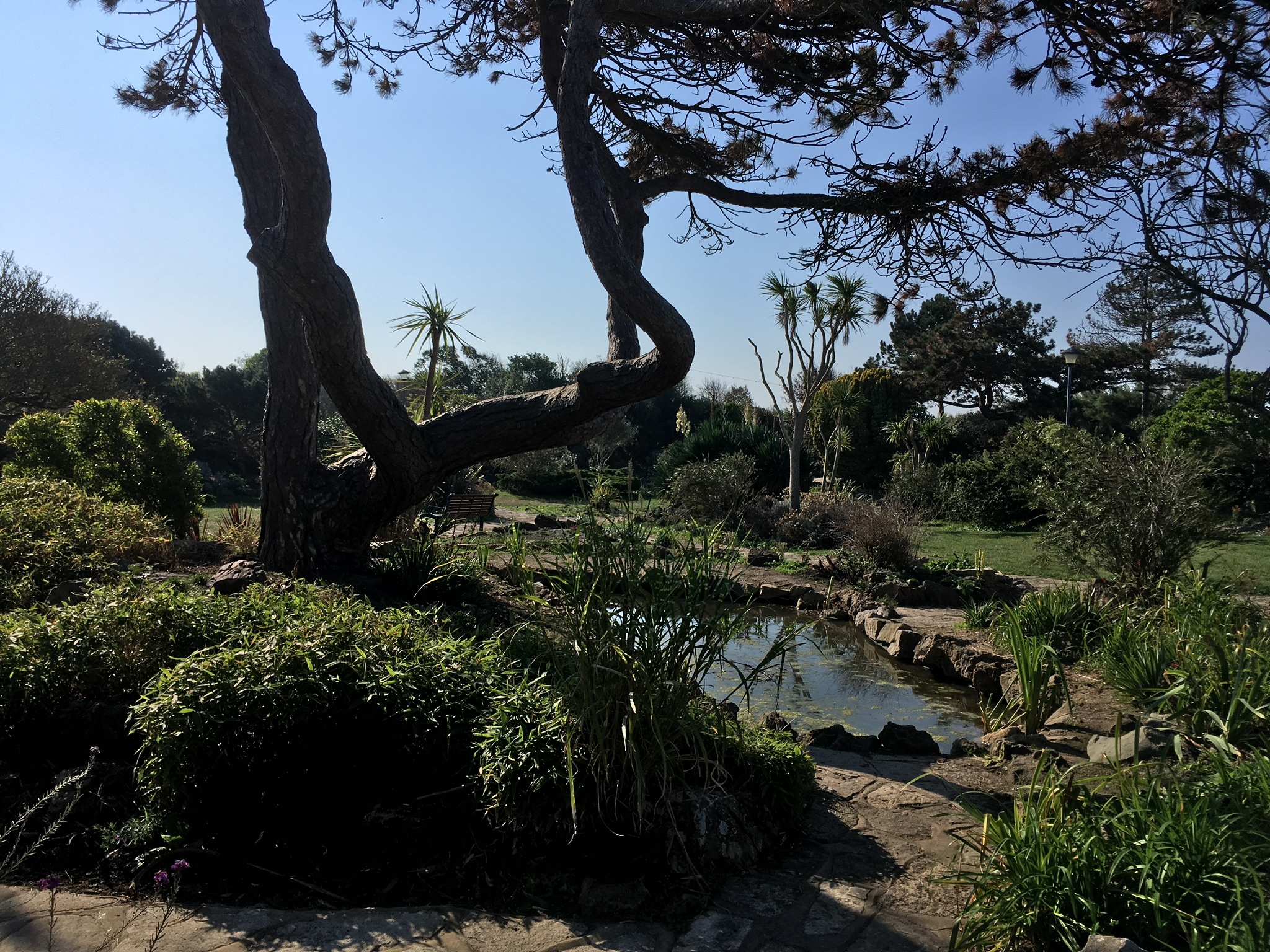 Thinking I might get a good shot of the waterfall from the top I climbed the steps but found a couple of ladies had beat me to it. They were obviously enjoying the peace and quiet and I didn’t want to disturb them so my photo opportunity will have to wait until another time. Instead I went back down into the gardens to see what other flowers I could find. My search was not in vain. Near the pond edge the yuccas were in full flower, much later than the one in my garden which flowered in early summer this year. There were also evening primrose, a single hollyhock and some small alpine daisies to brighten my morning. By this time I knew I really ought to be thinking about getting back to the car park as the fast boys were due back shortly. As it was I emerged onto the esplanade just as they arrived.  Of course they were hot, thirsty and more than a little hungry after their morning run. There was some discussion about where to go to get something to eat and drink. When I mentioned there was a cafe inside Southsea Castle they decided to go and have a look. It did look rather inviting with the ancient brickwork painted in pale pastel colours and little vases of flowers scattered about. The cooking smells were mouth watering too. Beautiful as it all looked and smelled, the hot and slightly sweaty, runners felt a little out of place amongst the well heeled clientele. In the end we walked a little way up the road to the Tennis Club cafe for our brunch.  All in all none of us could have hoped for a better morning. The runners had eaten up the miles with sea views and salty air and I’d enjoyed my historic and horticultural wanderings in Southsea. Between you and me though, I’m fairly sure I got the better deal.