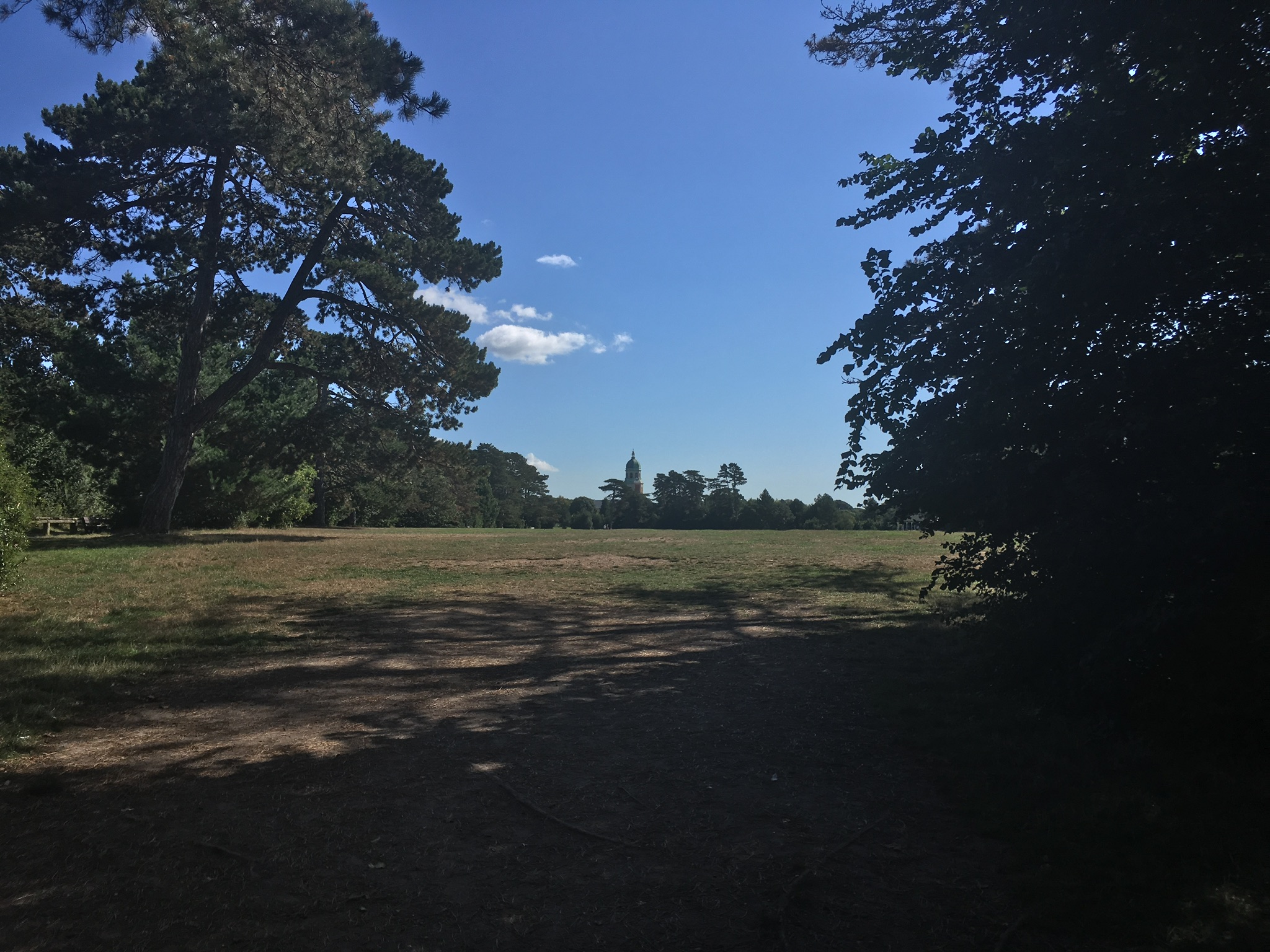 We left the beautiful new benches and set off across the park, our heads filled with the lost and wounded soldiers of so many wars. Neither of us said much as we walked across the grass of the cricket pitches towards the distant chapel. We were too busy thinking of all those past sacrifices made so we could live in freedom. War is neither good nor glorious but, when the alternative is to sit back and let evil and injustice prevail, it becomes an unpleasant necessity. Today we would be remembering those who gave so much.

On the main field we paused, trying to imagine the massive hospital that once occupied this expanse of grass. As part of the renovations, small pergolas have been built at each corner of the demolished building. They include information and photographs and are designed to give an idea of the scale of the place but it’s magnificence is lost and it’s still difficult to envision. Luckily, I came armed with some F. G. O. Stuart postcards on my phone and, with the aid of the pergola, was able to recreate one of them almost perfectly. 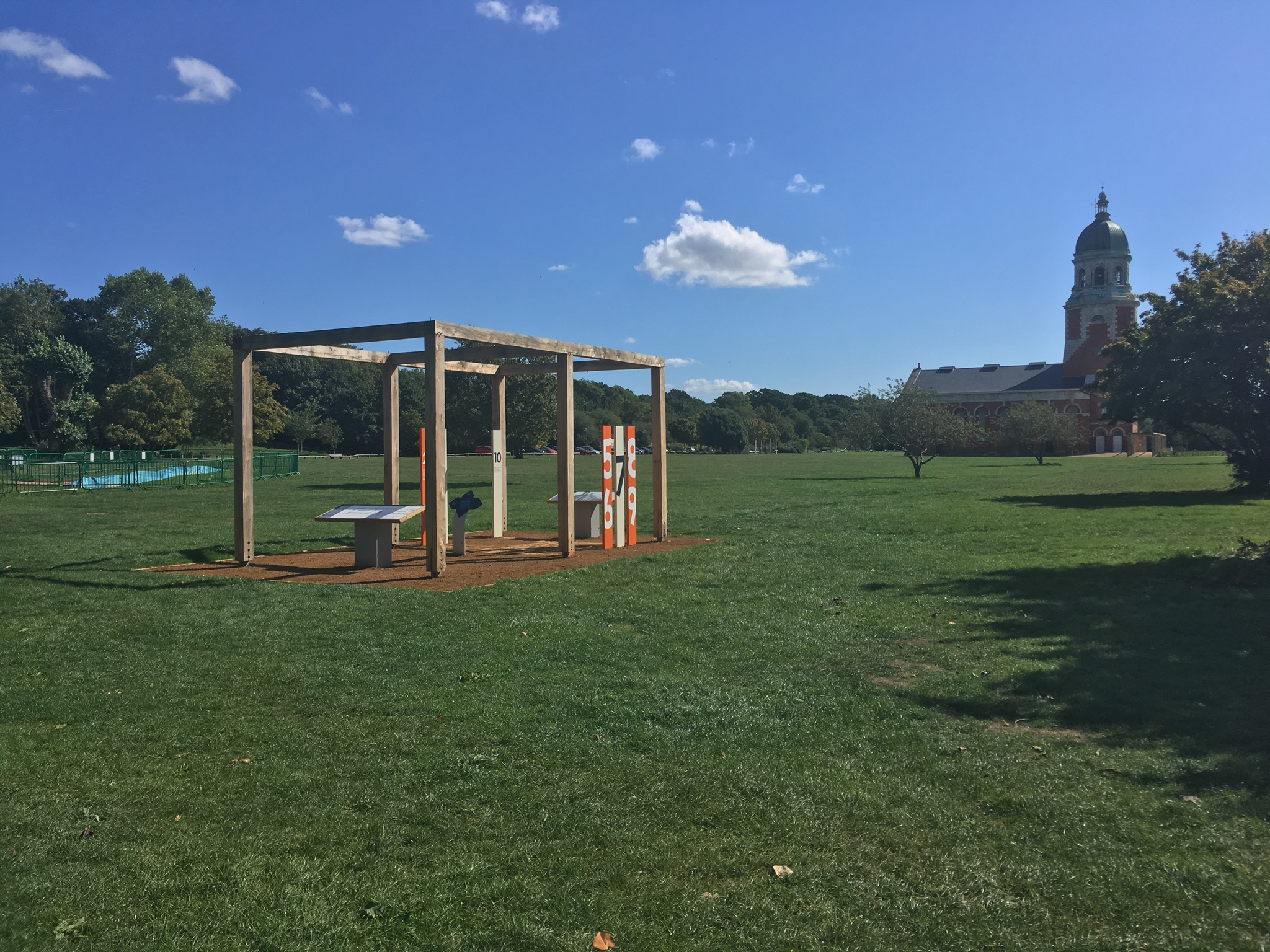 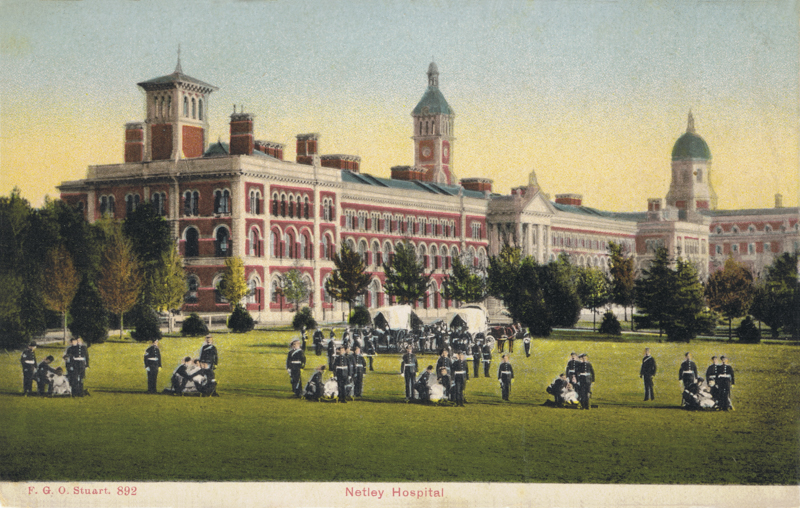 Netley Military Hospital was built in response to the atrocious conditions in military hospitals during the Crimean War. Work began in 1856 with plans to accommodate one thousand beds. It took seven years to be finished and thirty million bricks. Even so, during World War I, it wasn’t big enough, even with extra beds lining the corridors that ran the length of the hospital. The British Red Cross had to build a second, temporary hospital of wooden huts in the field behind the main hospital. More than twenty thousand patients were treated in this annex. 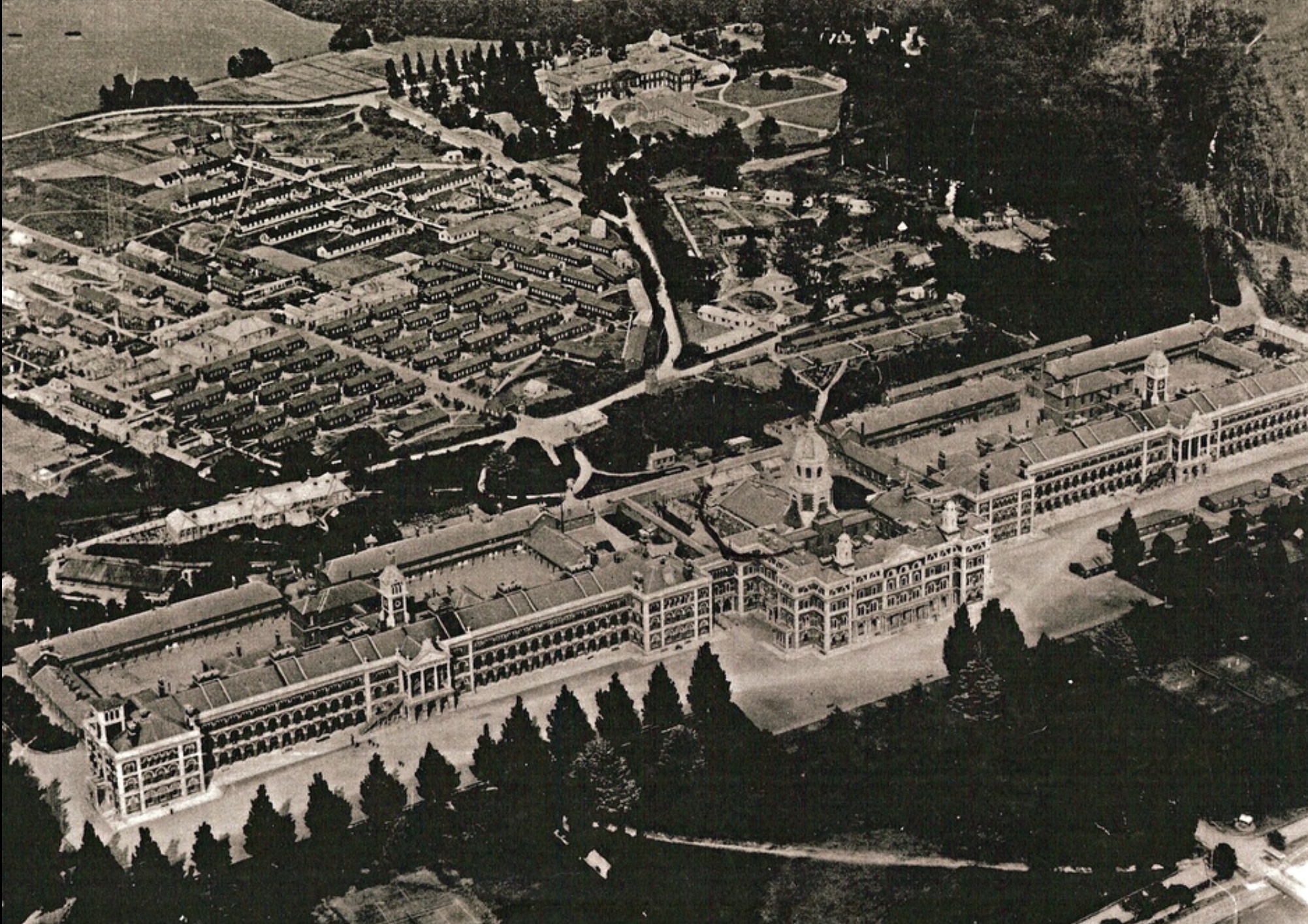 Our main aim today was to visit the newly restored chapel, the only part of the hospital complex that remains today. Our walk had taken longer than expected though, partly because of the heat, partly because of the detour across the shingle. It was now half past twelve and we needed food and drink before we went much further. So, instead of heading straight for the chapel, we turned towards the cafe in the northern corner of the site.

On the way there we stopped to look at the second pergola, showing where the northern corner of the hospital once was. The information panels and photographs here told us what life was like for wounded soldiers before the hospital at Netley was built. Back then the army relied on garrison hospitals. Each regiment had a single surgeon, two assistants and a hospital cart with a tent and a medicine chest. There was one, woefully inadequate, military hospital in Chatham, Kent called Fort Pitt. This was an old napoleonic fort. Unsurprisingly, it was cold and damp. The wounded soldiers slept on straw. Mortality was high.

Queen Victoria was horrified when she learned of the conditions her ‘poor soldiers’ had to endure. She wrote to Lord Panmure, the Secretary of State for War, demanding that decent military hospitals were built. Netley was chosen as the best location, as ships could transport the wounded up Southampton Water directly to the hospital. Land was compulsorily purchased from Thomas Chamberlayne for £15,000 and a War Department architect called R. O. Mennie drew up plans. 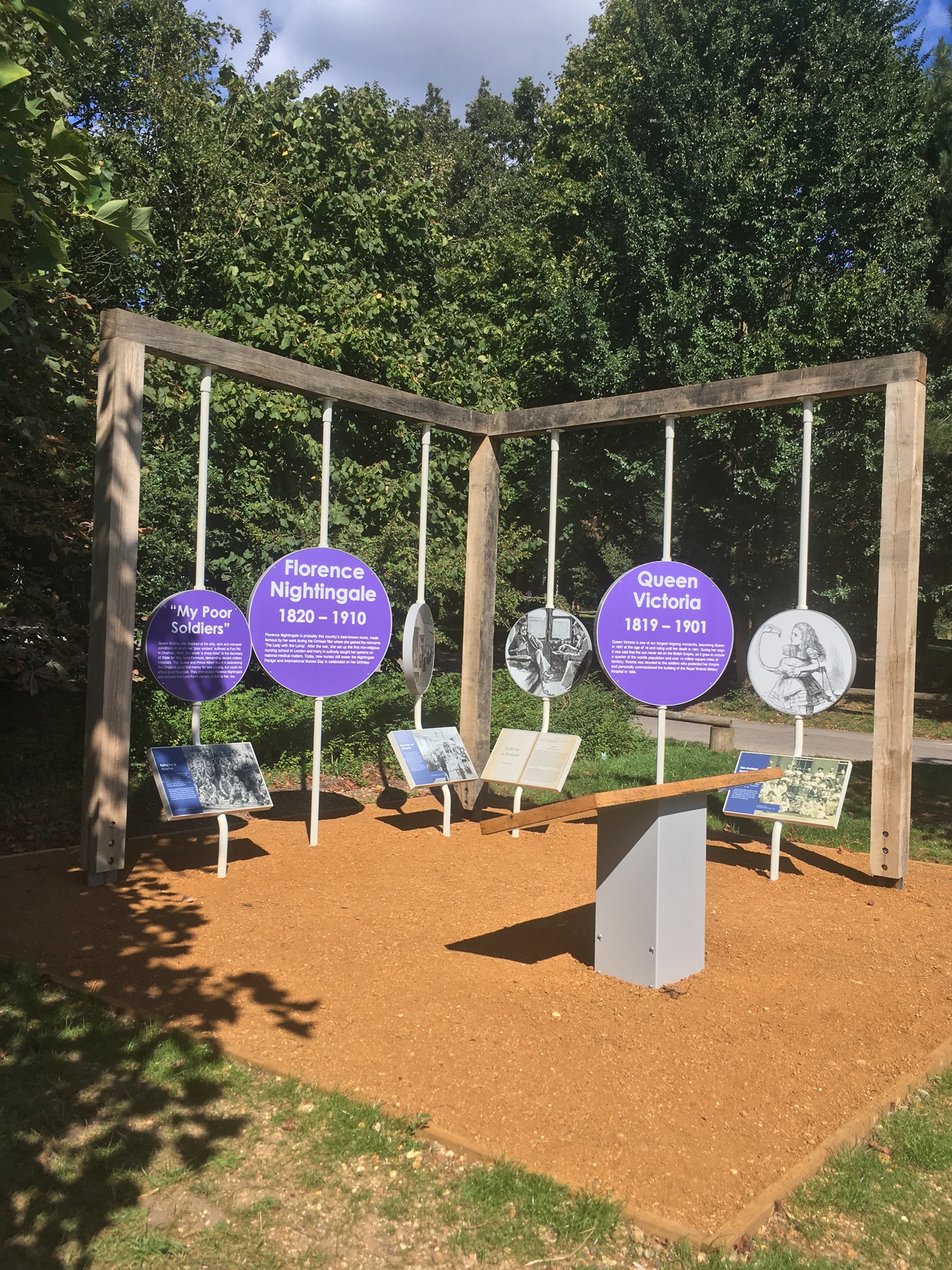 When Florence Nightingale was shown Mennie’s plans she condemned them as impractical and against all her principles of hygiene. In her opinion ventilation would be inadequate, the wards were too small and the corridors would spread infection. Other experts agreed and her concerns were debated in parliament but work had begun and it was too late and too expensive to make the changes she suggested. Lord Palmerston said, “all consideration for what would best tend to the comfort and recovery of the patients had been sacrificed to the vanity of the architect.” 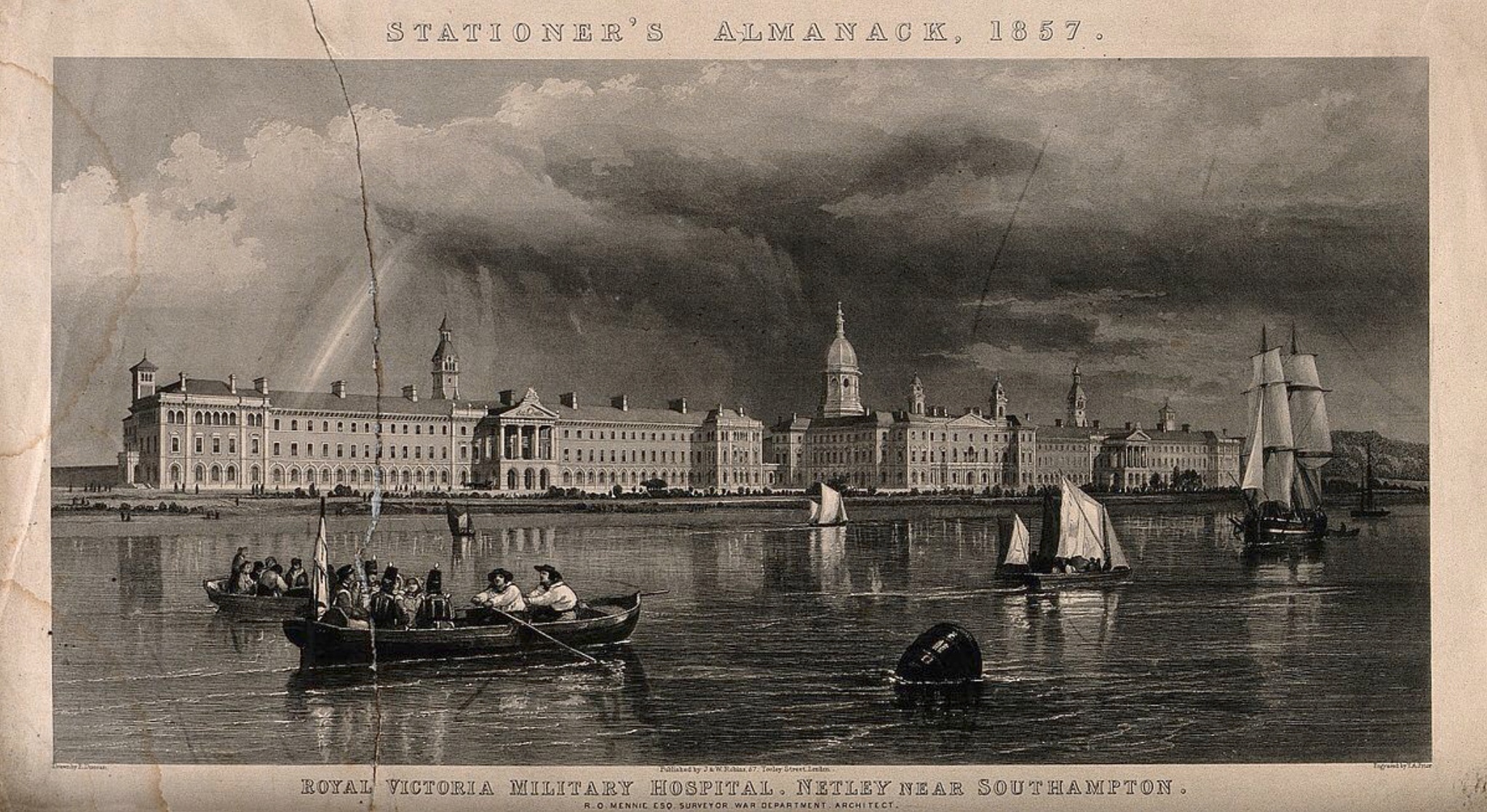 When it was completed, the hospital was certainly very beautiful and a great deal better than Fort Pitt but, had Nightingale and the other experts been listened to, it could have been so much better. Even so, it was the first of its kind and its fame spread far and wide. It was even mentioned in Arthur Conan Doyle’s novel A Study in Scarlet, as the hospital where Doctor Watson took a course for surgeons in the army. 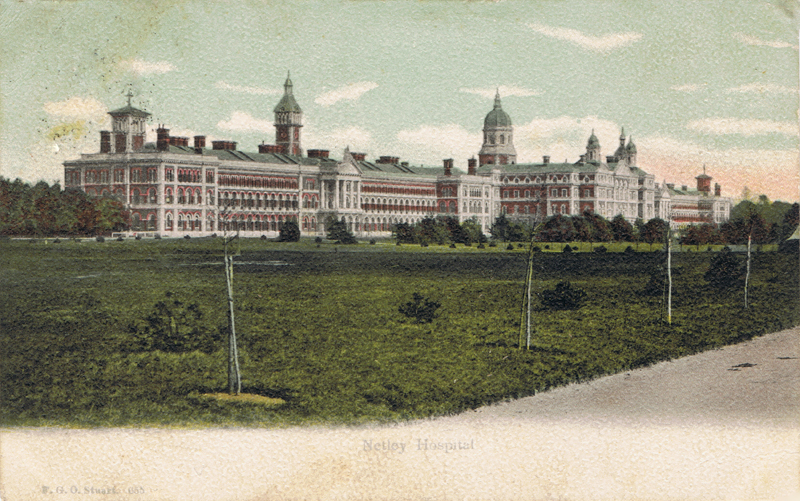 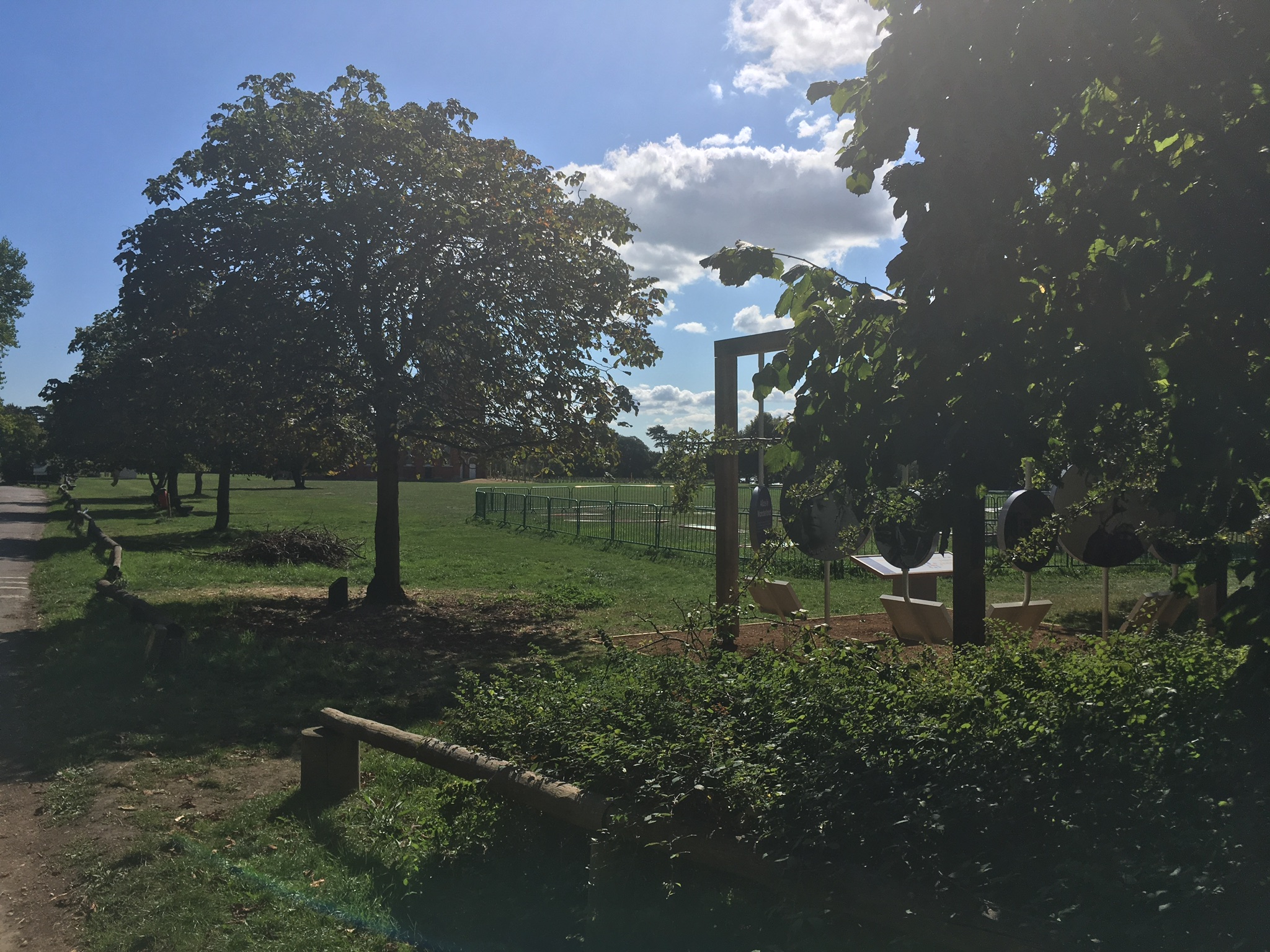 In the cafe CJ and I bought sandwiches and coffee and then went to sit on one of the benches outside to enjoy our food. We looked across the grass at the chapel and talked about what the hospital must have been like. A little robin came and watched us eat and a group of school children passed, thankfully heading for the shore and not the chapel. 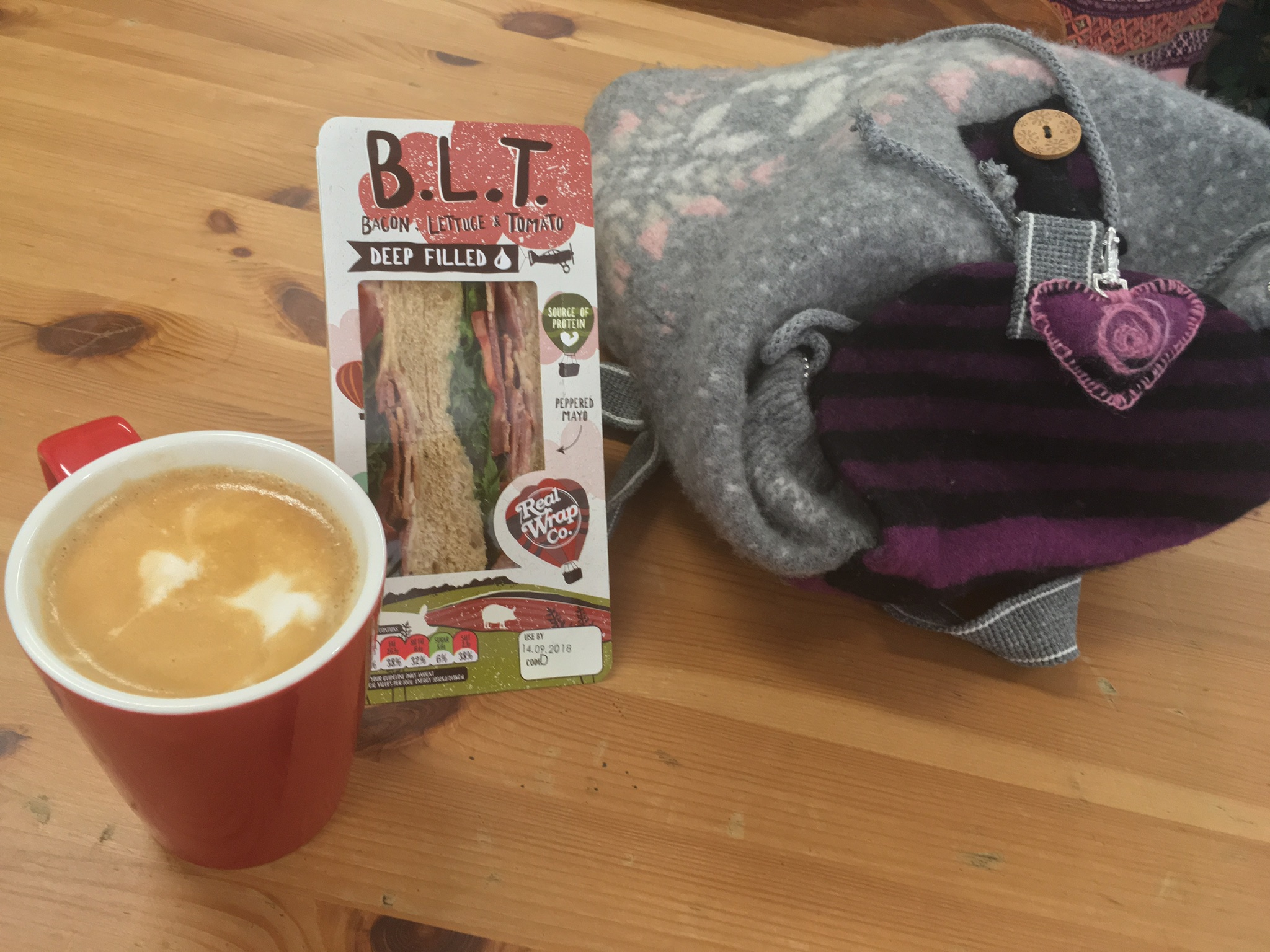 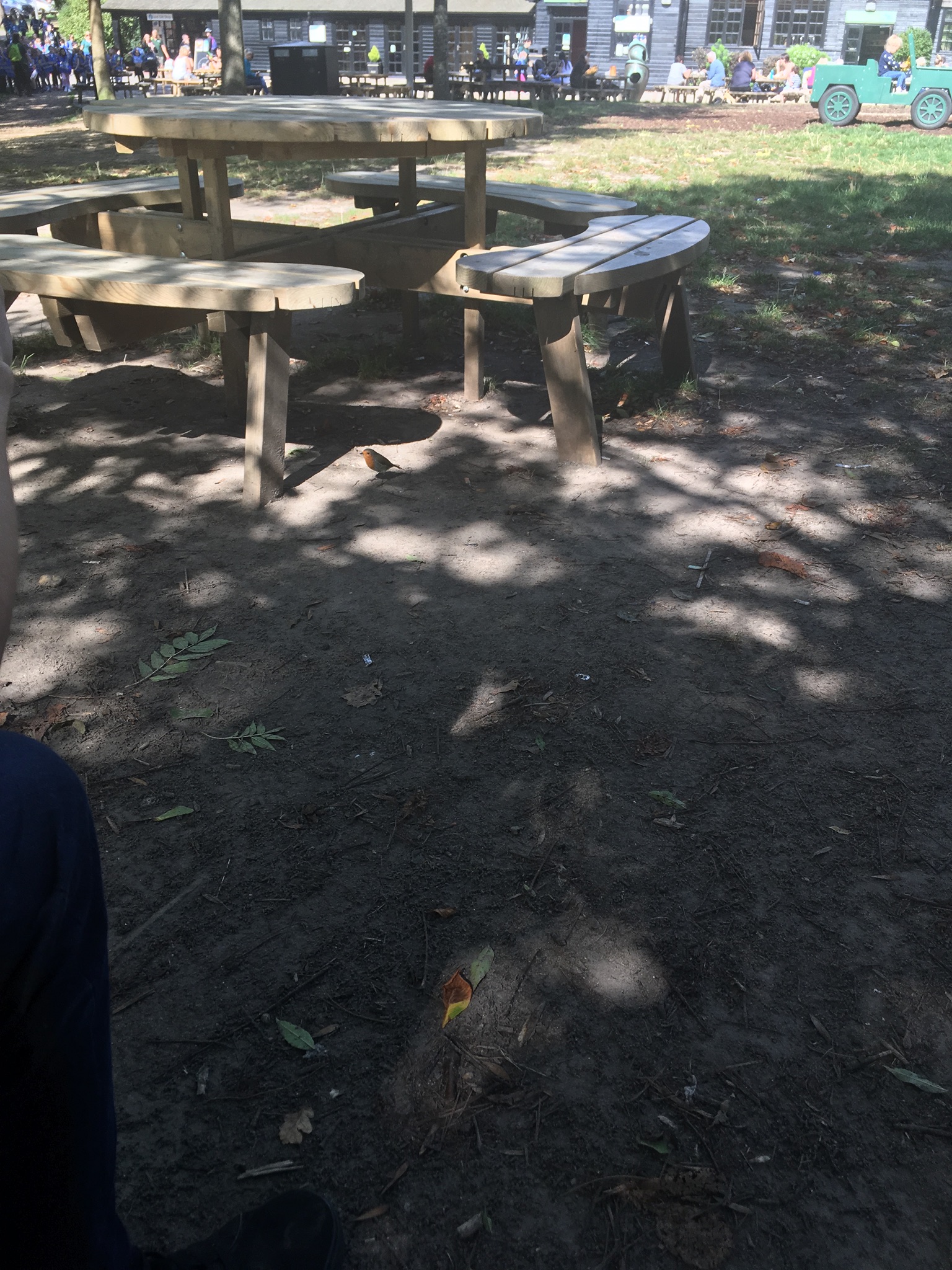 The hospital, for all its faults, did some great work. Amongst other things, Sir Almroth Wright, the professor of pathology, developed the first anti thyroid vaccine here. It also played an important role in my own family history. My grandfather, known to us all as Pappy, was badly wounded in the trenches during World War I. He ended up at Netley, at least as far as we can tell because no hospital records exist today, and his family, including my father, Eric, moved from Witney in Oxfordshire to Southampton to be near him. If they hadn’t, neither I or CJ would exist.

With our hunger and thirst satisfied, we strolled across the grass towards the chapel. It was good to see it without the hoardings and scaffolding that have surrounded it for so long. There was a tingle of excitement too, knowing we would be going inside. Another large pergola has been built across the front of  the chapel including more pictures and information. Sadly, CJ and I were both disappointed to see the beautiful metal poppy sculpture that once graced the entrance has not been replaced. 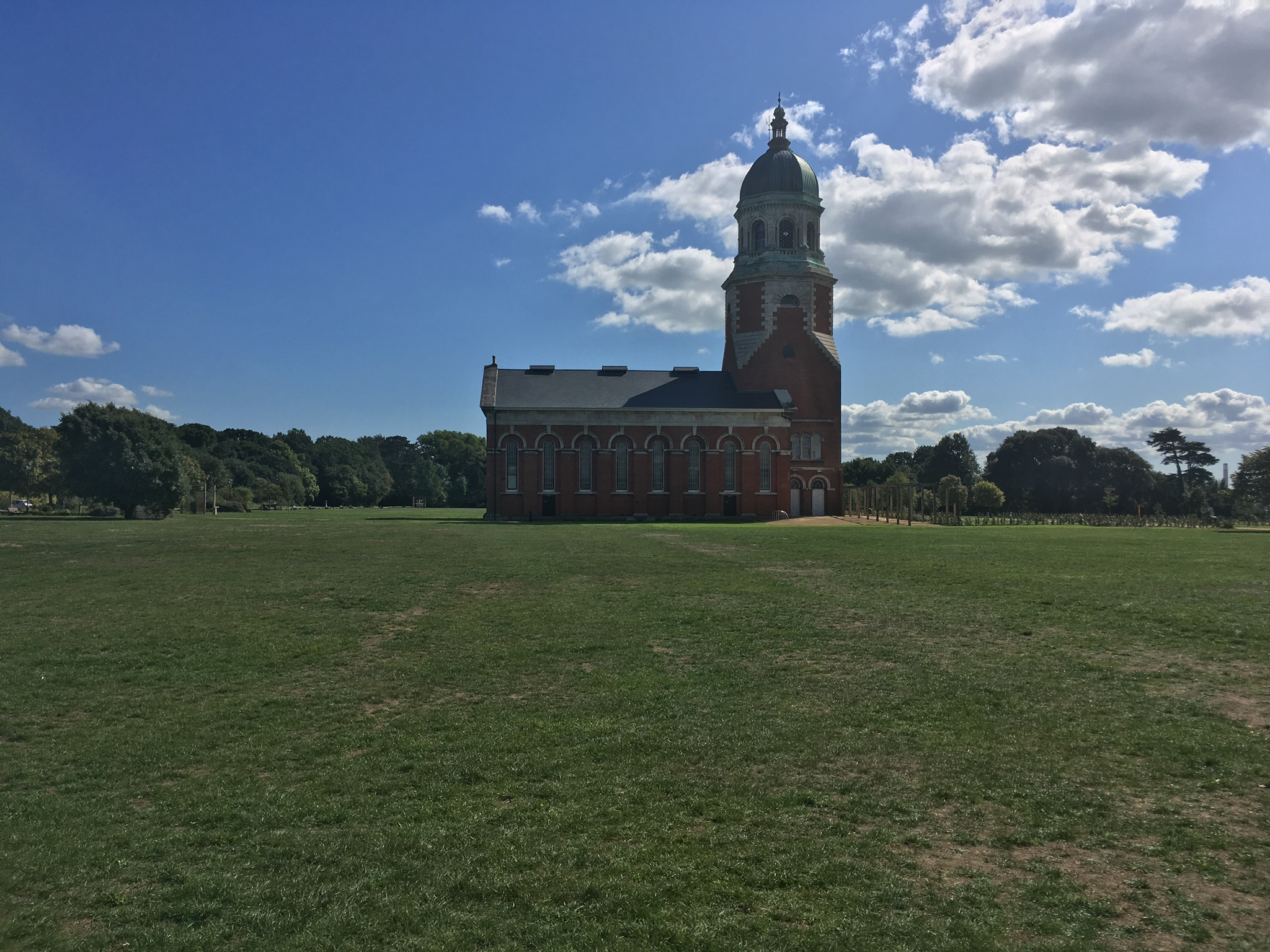 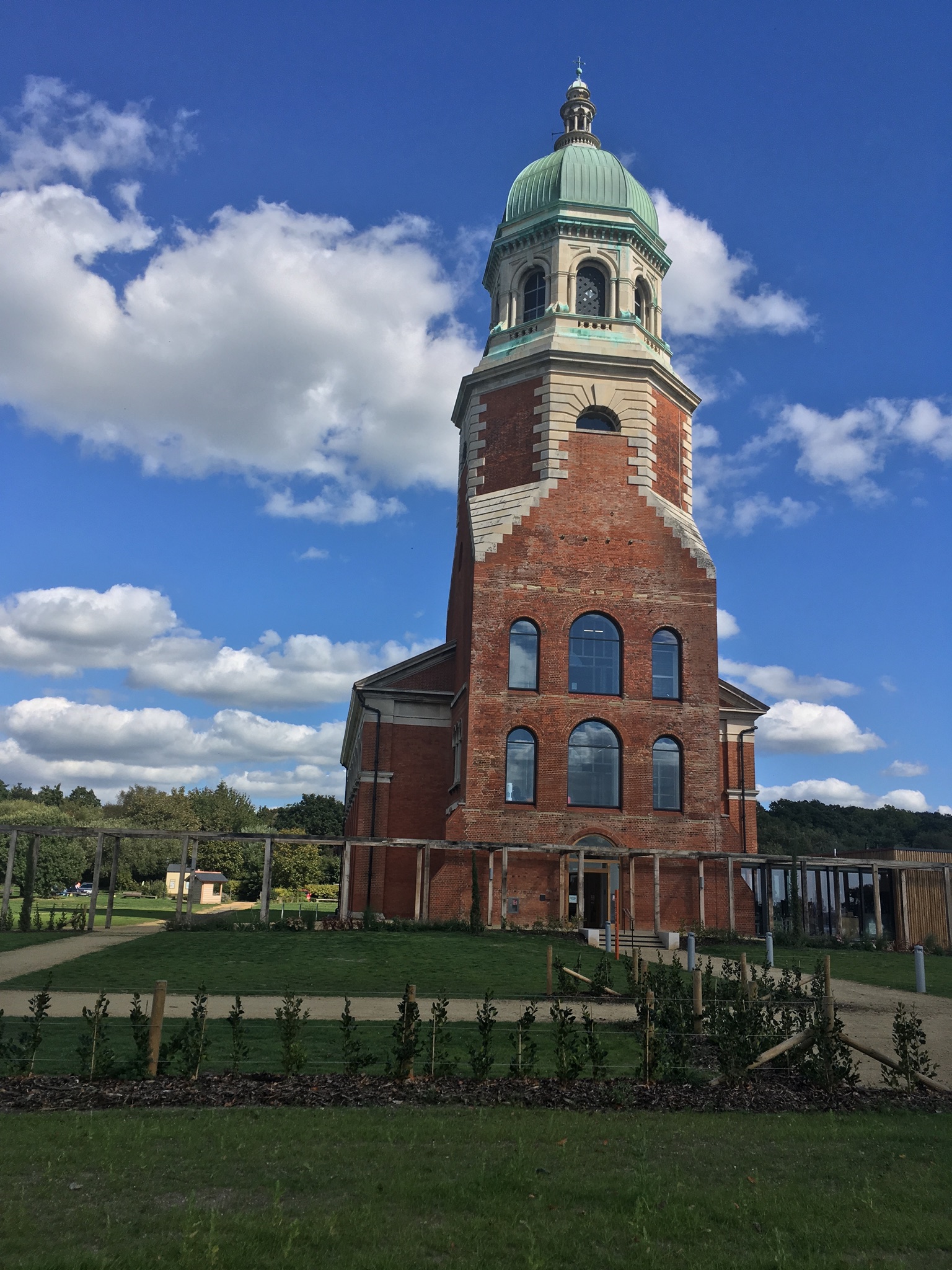 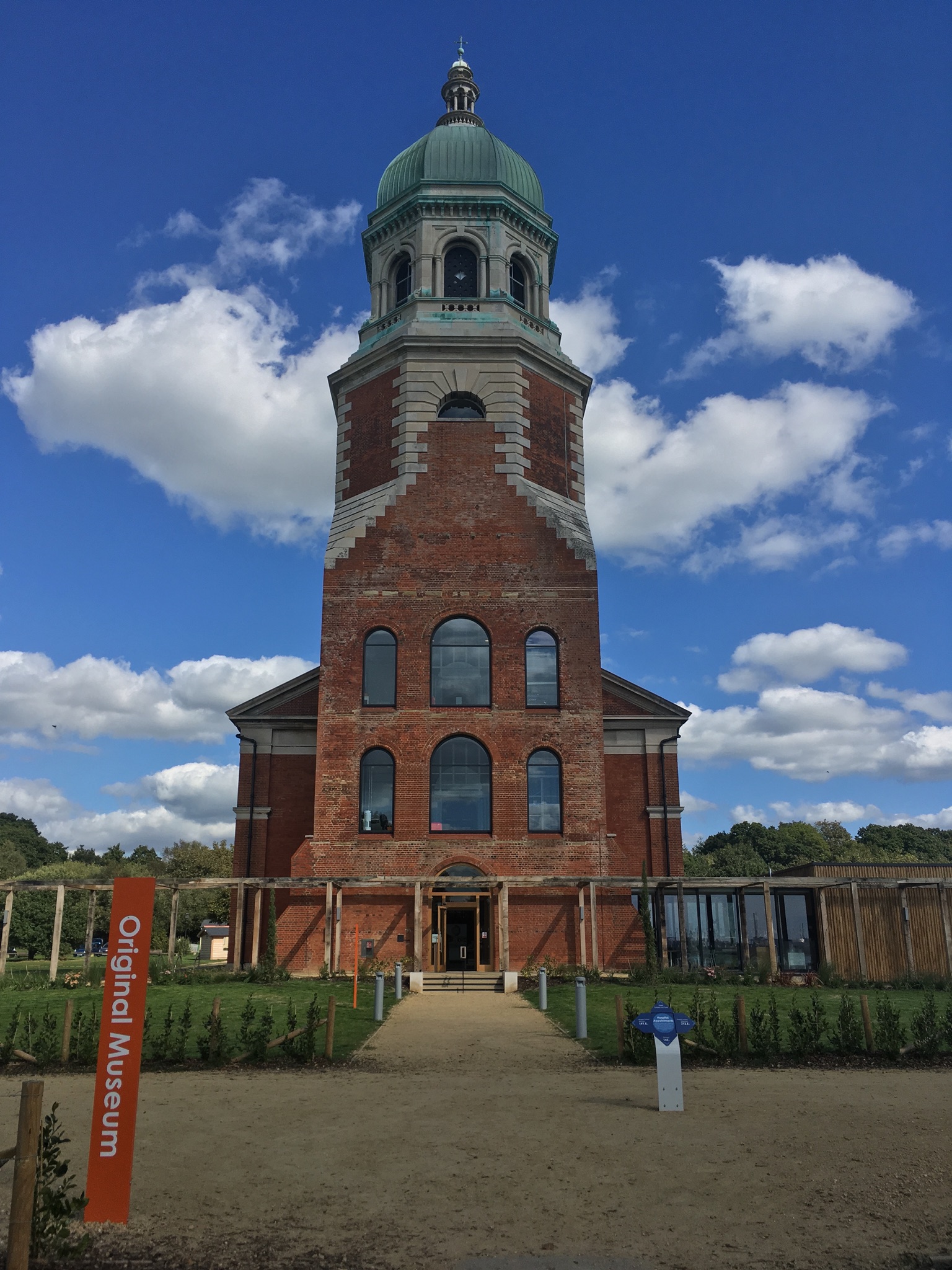 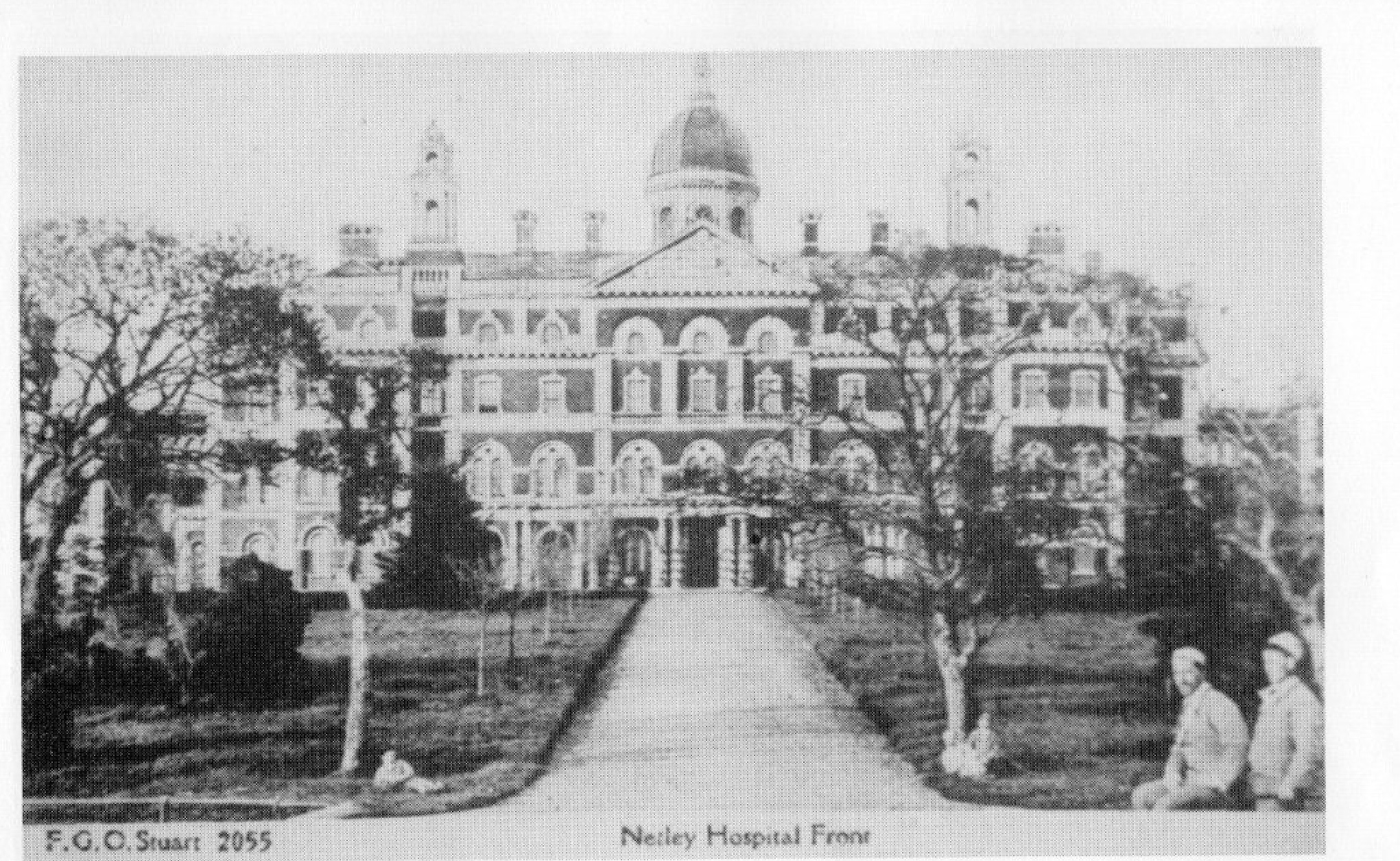 Bizarrely, the entrance hall held a natural history museum, complete with the skeleton of an elephant, glass cases of human skulls and shrunken heads. Above the door another glass case contained a bedspread, knitted by Queen Victoria. The centrepiece of the hall was a beautiful marble staircase.

Behind the entrance hall, more or less where we were standing, was a large glass covered swimming pool, measuring fifty seven by thirty four feet and lined with blue and white tiles. This was filled with water pumped from the sea and used for hydrotherapy. There were also eight small bathrooms with hot and cold baths, showers and vapour baths. 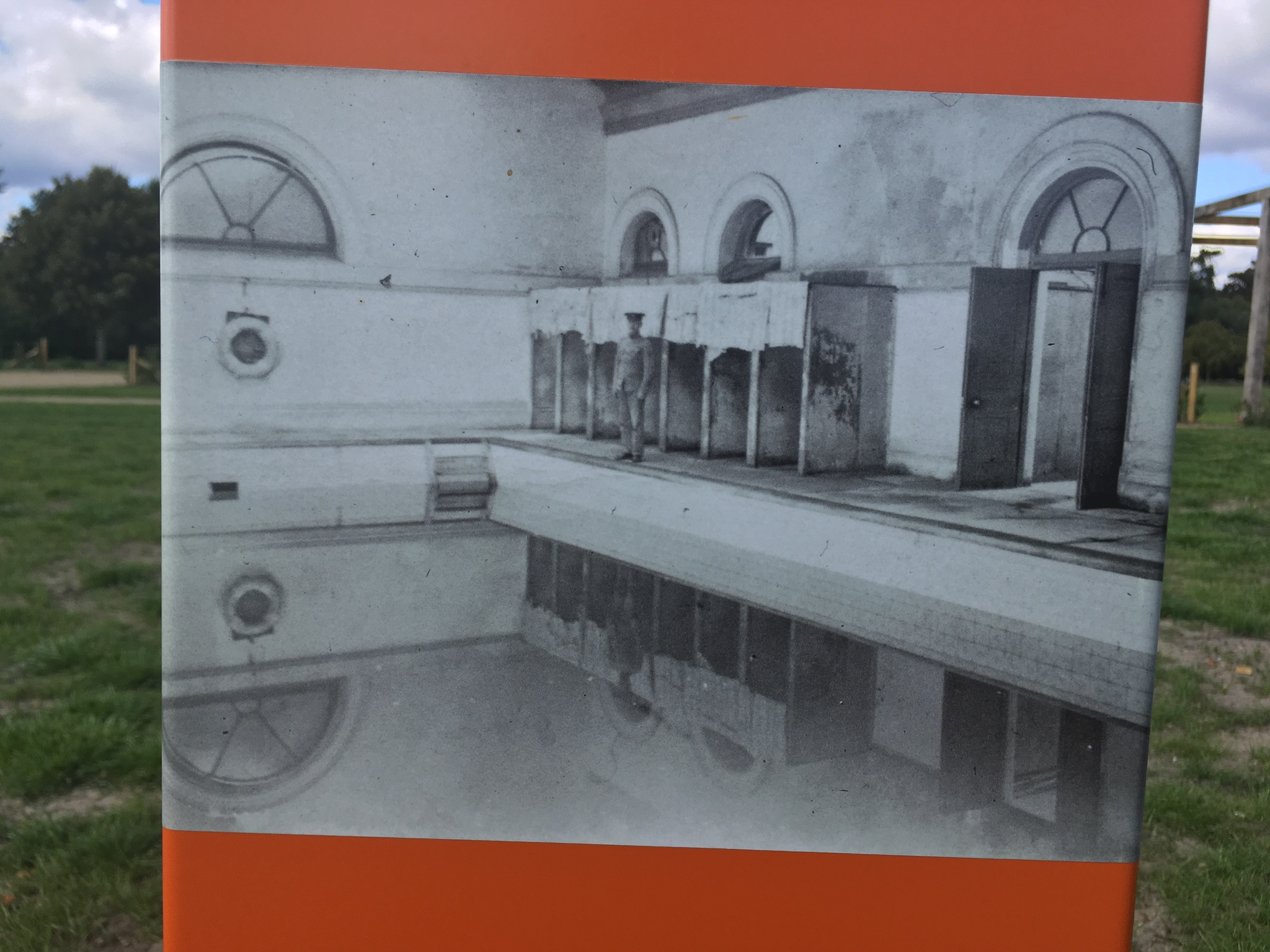 This was a short lived facility. By World War I the pool had been filled in and replaced with a theatre. Music hall stars like Marie Lloyd performed here to entertain the wounded soldiers. In the 1930’s monthly variety shows were held there and there was also a cinema where local people could pay a penny to watch silent movies every Friday. 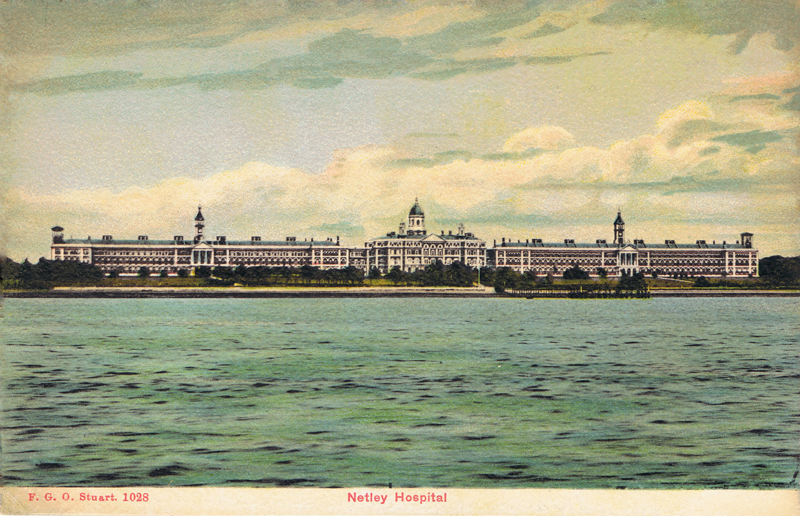 So, after spending the whole morning walking to get here, having read all the information boards we’d passed along the way and looked at the old postcards on my phone, it was finally time to go inside the chapel…

He sat in a wheeled chair, waiting for dark,
And shivered in his ghastly suit of grey,
Legless, sewn short at elbow. Through the park
Voices of boys rang saddening like a hymn,
Voices of play and pleasure after day,
Till gathering sleep had mothered them from him.
Wilfred Owen