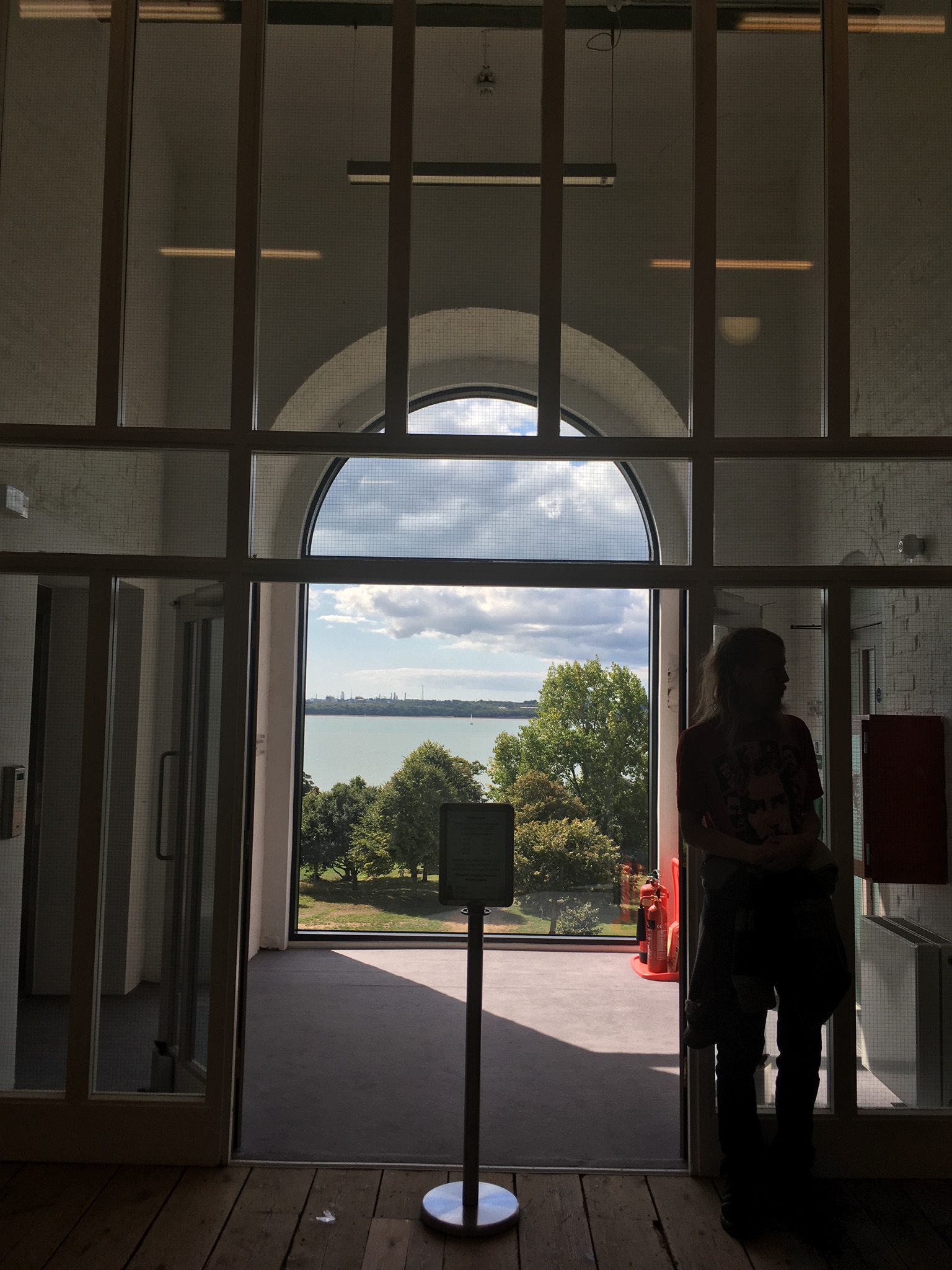 When we stepped inside the chapel it was empty except for the lady who sells tickets for the tower tour and a single guide. Entry to the chapel is free but there is a small charge to climb the one hundred and sixty six steps to the top of the forty six metre high tower. This was what we’d walked so far for and £3.50 seemed a small price to pay for a birds eye view of the park.

With no one else about, the guide was eager to show us around so we thought we’d start with the tower and work our way down. At least we’d have it all to ourselves. So, eschewing the lift, we climbed the stairs to the first floor. Here we found the large, arched window we’d seen from below. The view across the park and Southampton Water towards Fawley was breathtaking. This, our guide told us, was actually once a door leading to and from the main hospital. All the soldiers who were mobile enough were required to attend services in the chapel so I could say with some certainty that Pappy once crossed this threshold, The lift only goes as far as the first floor so, even if we’d taken it we’d have been on our own from there onwards. The spiral staircase is a modern addition to the chapel. Originally, those whose job it was to climb the tower and tend to the bells had to climb ladders attached to the walls to do so. Climbing the stairs was tough enough, although not quite as tough as the stairs in the Civic Centre Clock Tower. Perhaps if we hadn’t walked all morning to get here we might have had a little more energy. We hadn’t gone very far when we passed a round window. Due to my lack of height all I could really see through it was sky and tree tops but I stopped to take a photograph anyway. Then I continued to climb. Truthfully, it wasn’t too much of a challenge and we were soon at the top on a platform encircling the staircase. We were now in line with the large arched windows at the top of the tower. The room is octagonal and every other window was actually a painted panel showing what the view would have been like in another era. Slowly we walked around looking alternately at the views outside and the painted views. It wasn’t as easy as you’d think to get our bearings. Looking roughly north I was surprised at how very green and leafy the area was, although three blocks of tall flats in the far distance looked as if they might be the tower blocks of Weston. In many ways the painted views were more interesting than the real ones. They showed the park as it would have been when most of it was filled by the hospital.  This, above everything else we’d seen and read, brought home just how massive the hospital complex really had been. We could see how far the buildings stretched into the distance, the huts built in World War I when the main hospital became too overcrowded and the pier that was never quite long enough to be of much use. 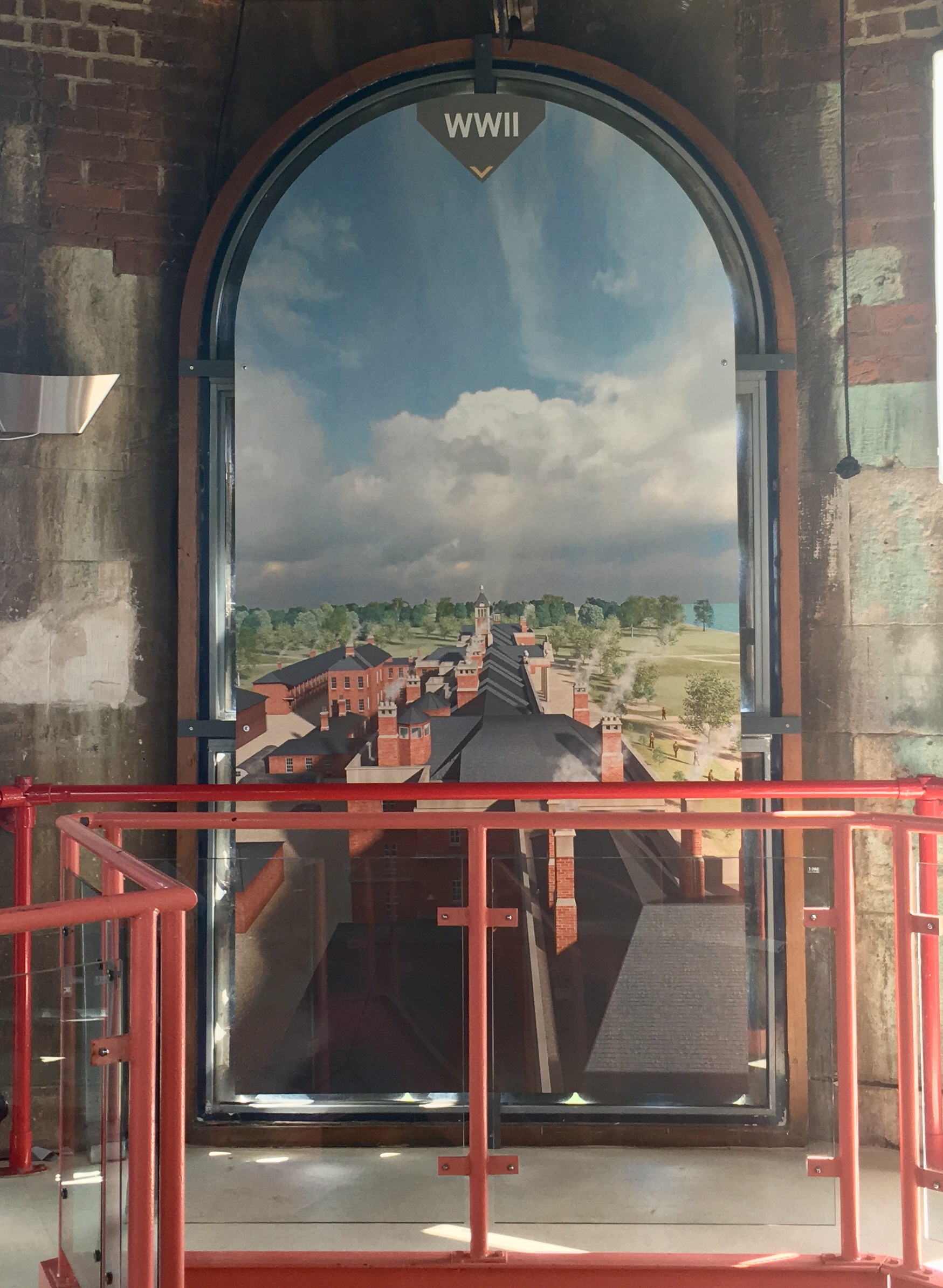 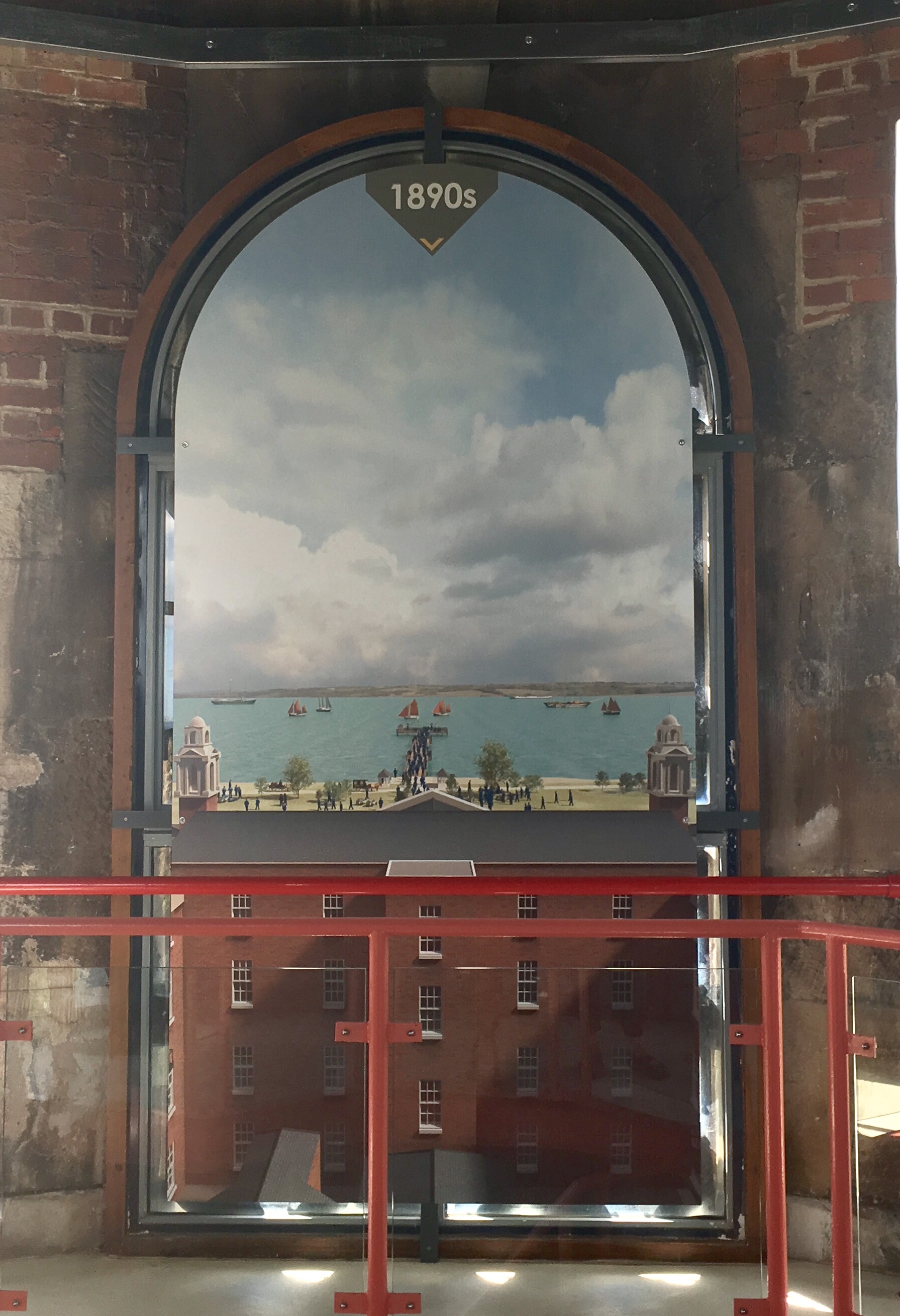 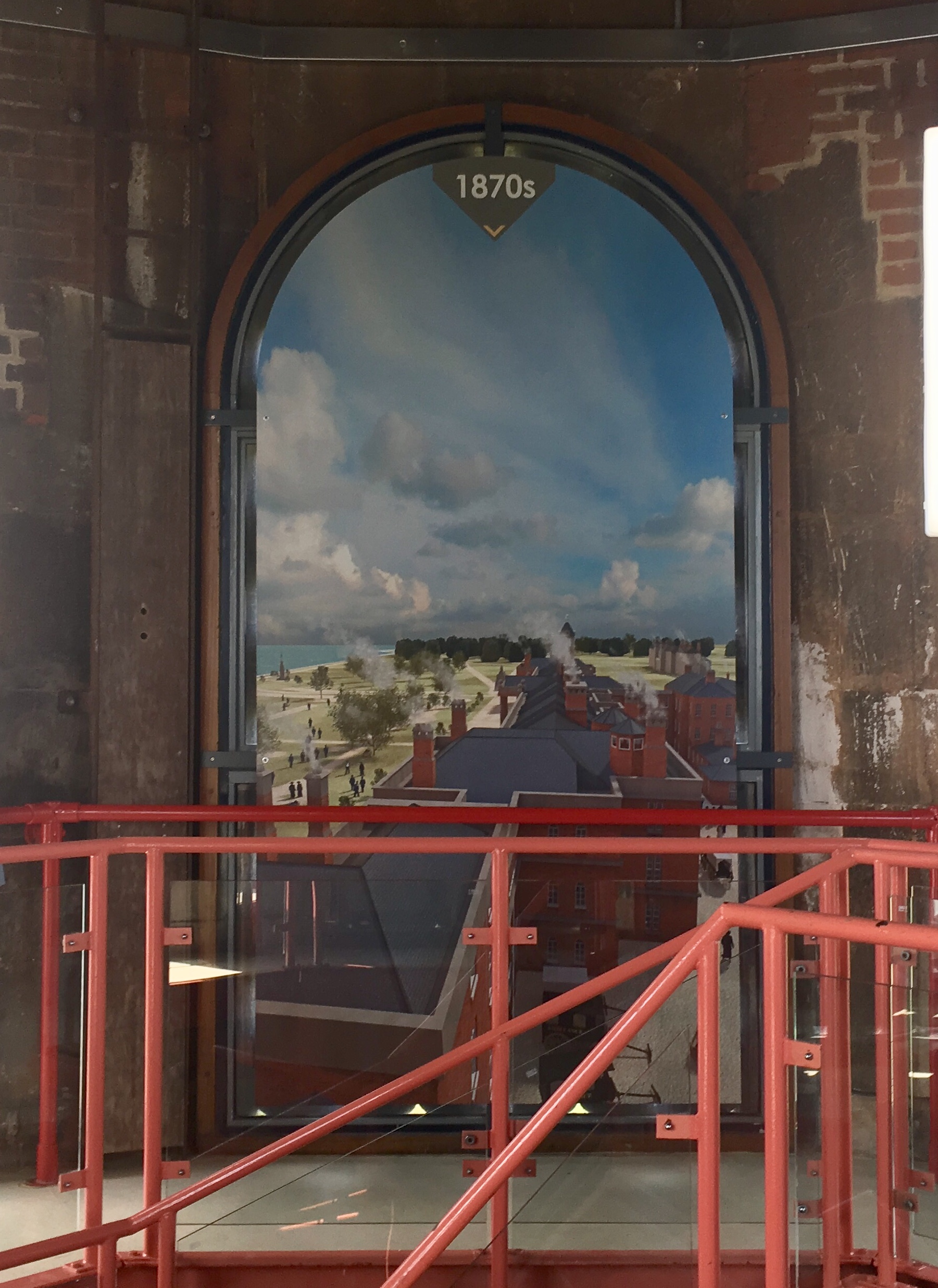 The view from the real windows was equally impressive and well worth the money and the climb. We stood for some time peering out across the park and beyond trying to make out landmarks. On Southampton Water little boats were sailing and we could make out Southampton Docks and Hythe. Although we knew Netley, Weston, Woolston and the city were between us and the horizon, the overall impression was of greenery, as if nothing but the woods existed. The grass below us was still a little brown from the long dry summer and the faint outline of the old hospital buildings, like a ghostly reminder, stood out. Looking towards Hamble we could make out a tall chimney that belongs to the boiler house of the aircraft factory in Hamble. Hidden somewhere amongst the trees to the left of this was Victoria House. This was once the infamous D Block, the military lunatic asylum where the poor, shell shocked soldiers were housed. These days it’s part of the Hampshire Constabulary training centre. 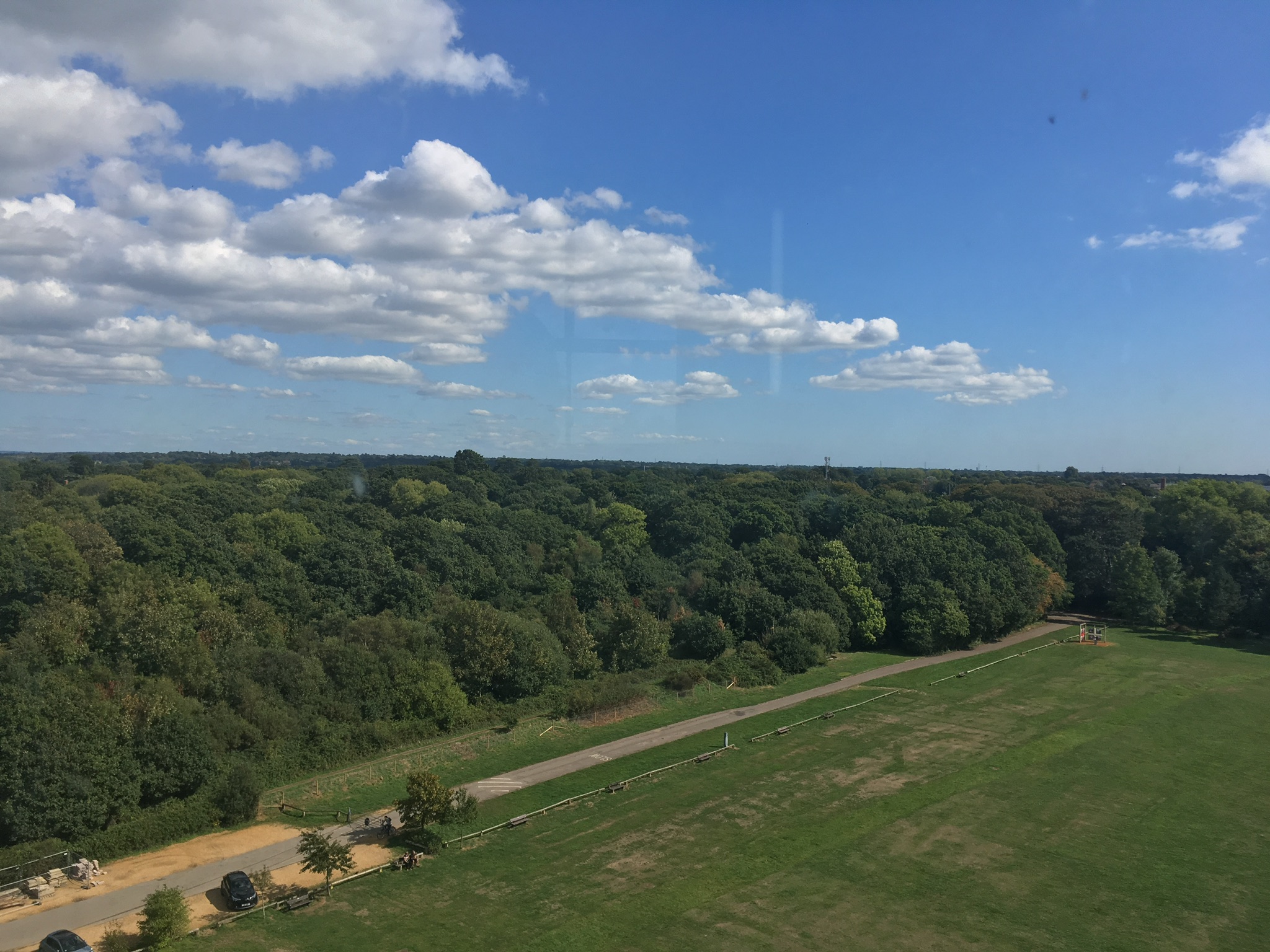 This was never meant to be a place for the public to visit so very few people ever got to see the hospital from this vantage point. Those that did come to the top of the tower would have had to climb a very long ladder to get there. Part of that ladder is still used to get into the domed belfry are today. It didn’t look very inviting and I can’t begin to imagine climbing such a thing from the first floor. So far all our attention had been directed at the windows, both real and painted, seeing the rusty looking metal ladder drew our eyes upwards to the interior of the copper clad dome. The herringbone pattern of the pale wood and the spider web of dark wood was almost as pleasing to the eye as the copper is from outside. 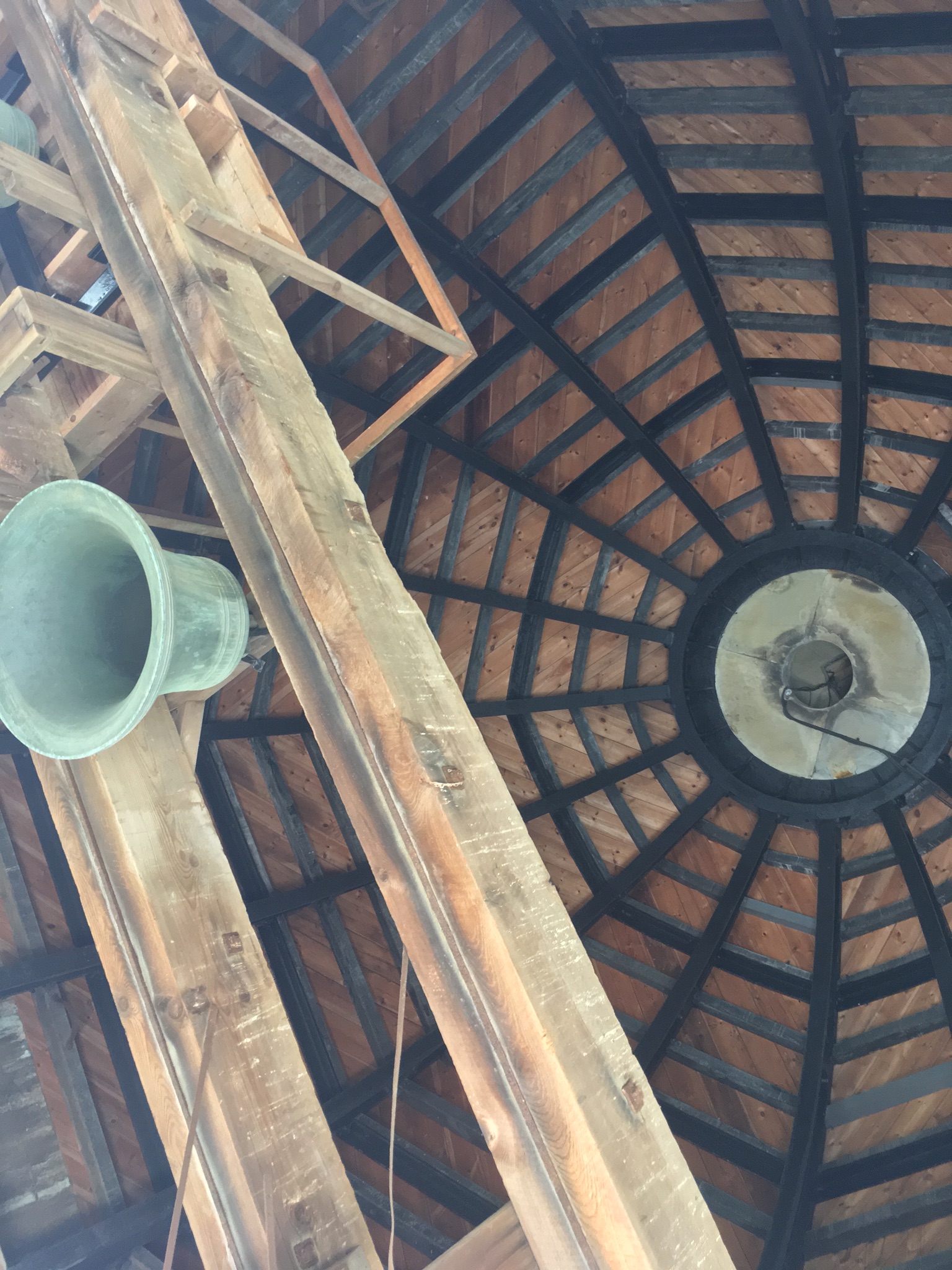 Our guilde asked if we would like to ring the bells but warned they were very loud from inside the tower. CJ, of course, couldn’t resist and, once we were prepared with our hands over our ears, he pulled the rope. Only CJ got the full force of the initial peal because he couldn’t cover his ears and ring the bells at the same time. Even with hands over ears the sound was incredibly loud. The ringing seemed to vibrate through our entire bodies as it went round and round inside the dome. The ringing seemed to go on for ever. Even when we’d uncovered our ears it reverberated on and on as if it was very slowly escaping from the dome into the world outside. Goodness only knows what the people of Netley thought! 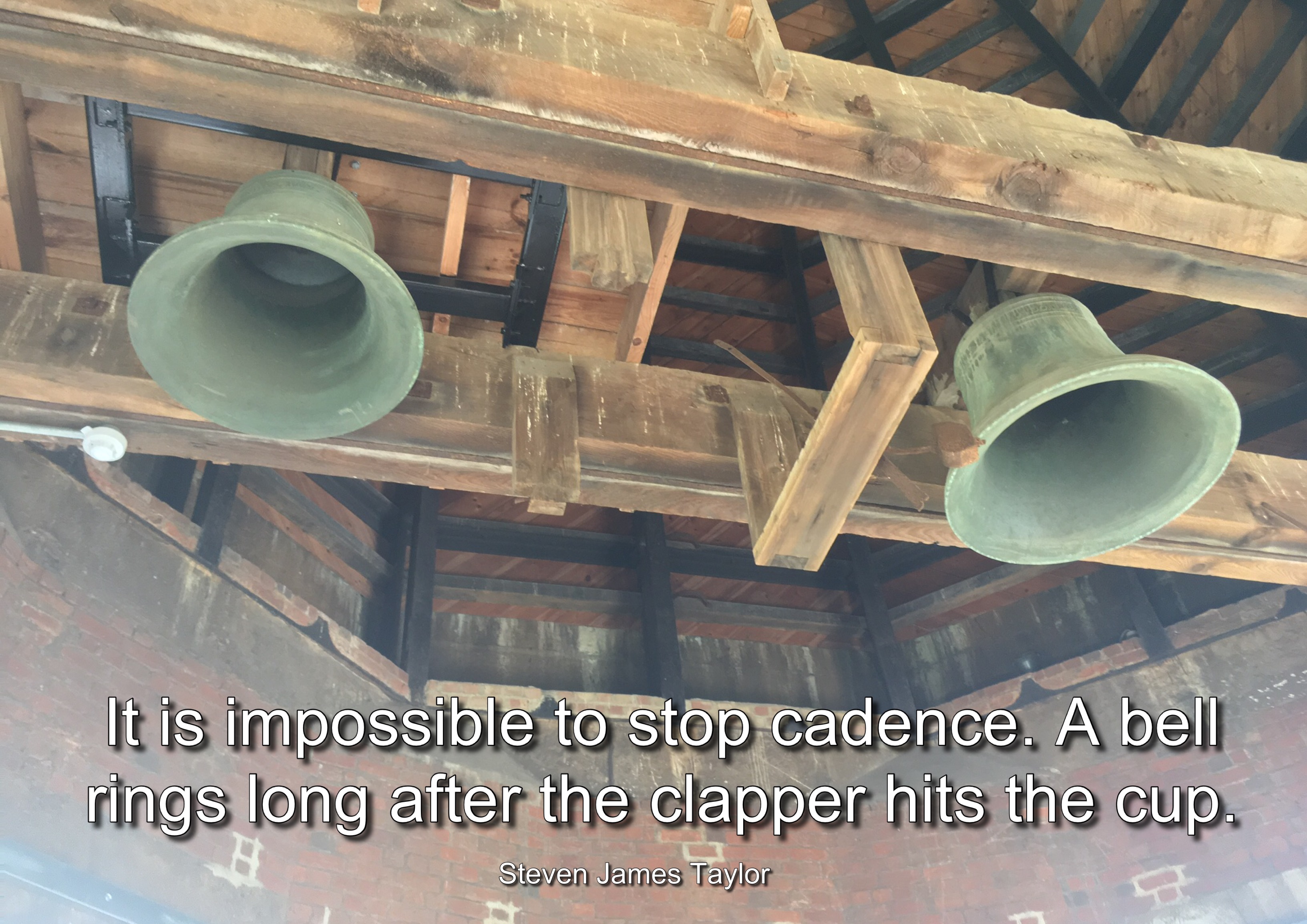 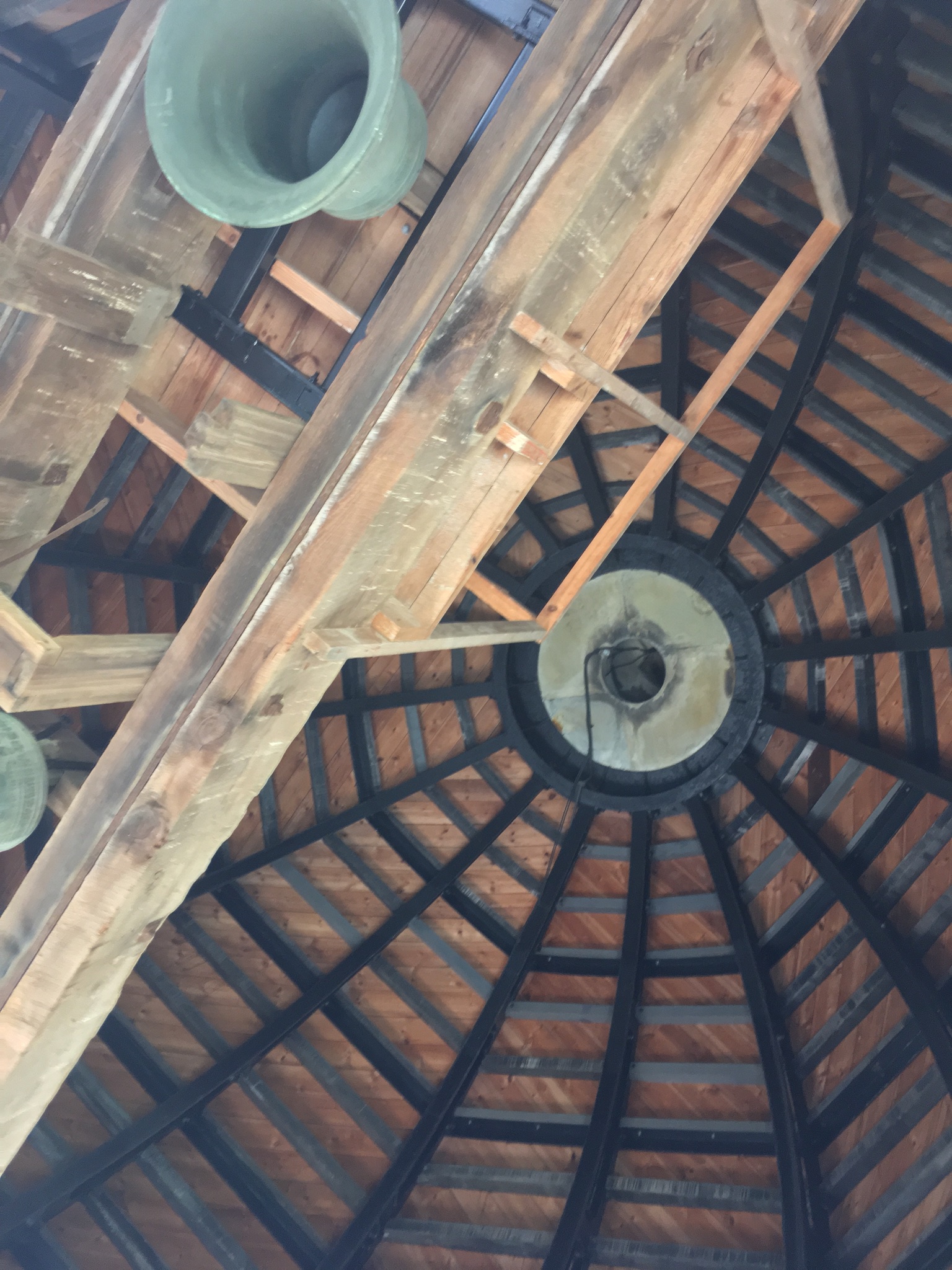 Once the ringing had finally died away, we took one last look around the tower and it was time to go back down the spiral staircase and see the rest of the chapel. 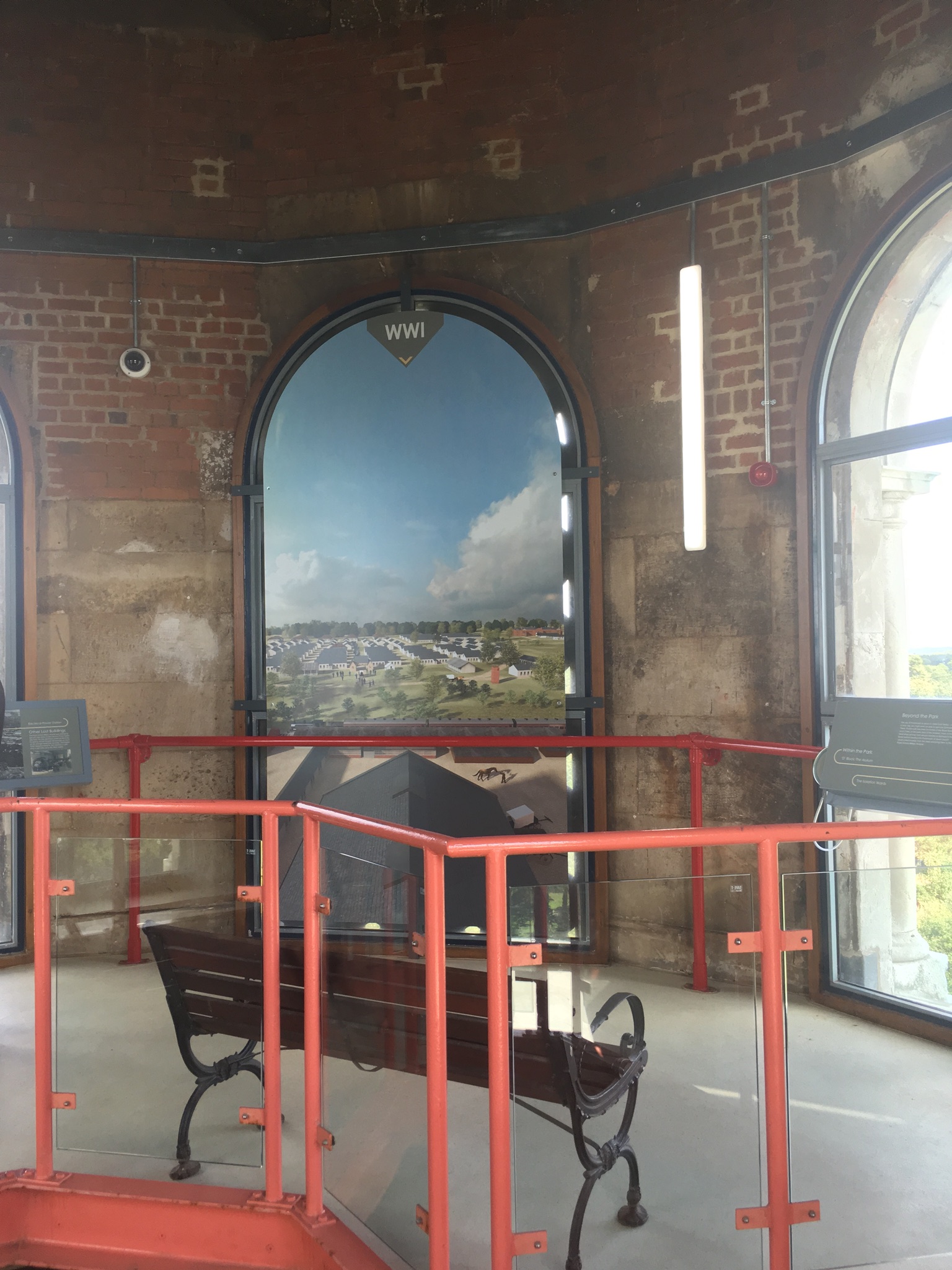 10 thoughts on “Climbing to the top of the chapel”