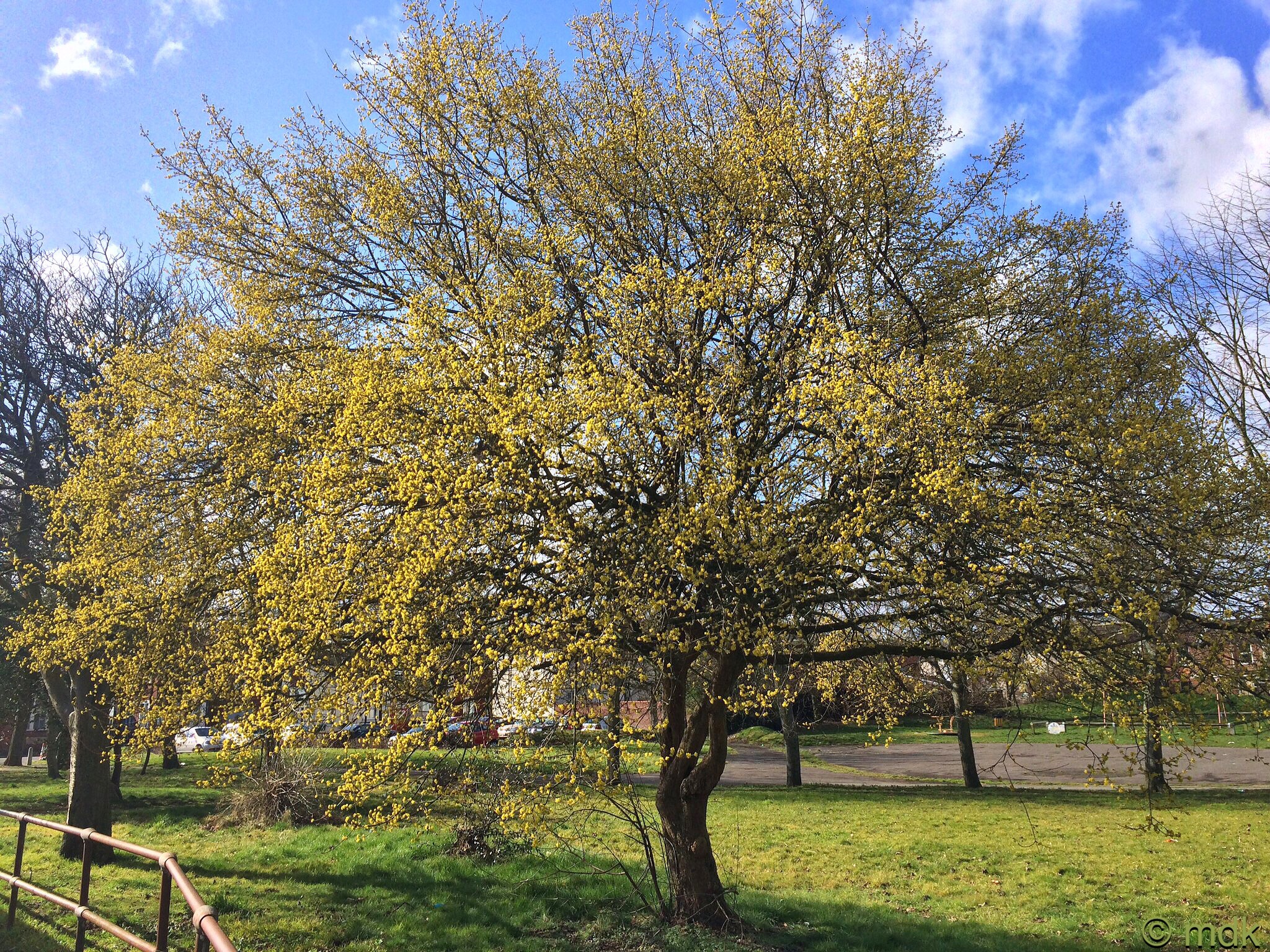 Interesting as my exploration of Clausentum may have been, there really wasn’t all that much walking involved. On such a bright day it seemed a shame to go home so soon so I carried on walking with no real plan. My feet led me over the Big Bridge. On the other side the desolate park was looking anything but desolate as I passed,  brightened by a large cornelian cherry beside the railings, vibrant with an overload of tiny blooms that I’d taken for leaf buds from a distance. Either way it is a sign that spring is in the air. It felt like a day for history so, on a whim, I decided I’d go from a Manor House I couldn’t really see to a castle that isn’t really there. It seemed like a plan. 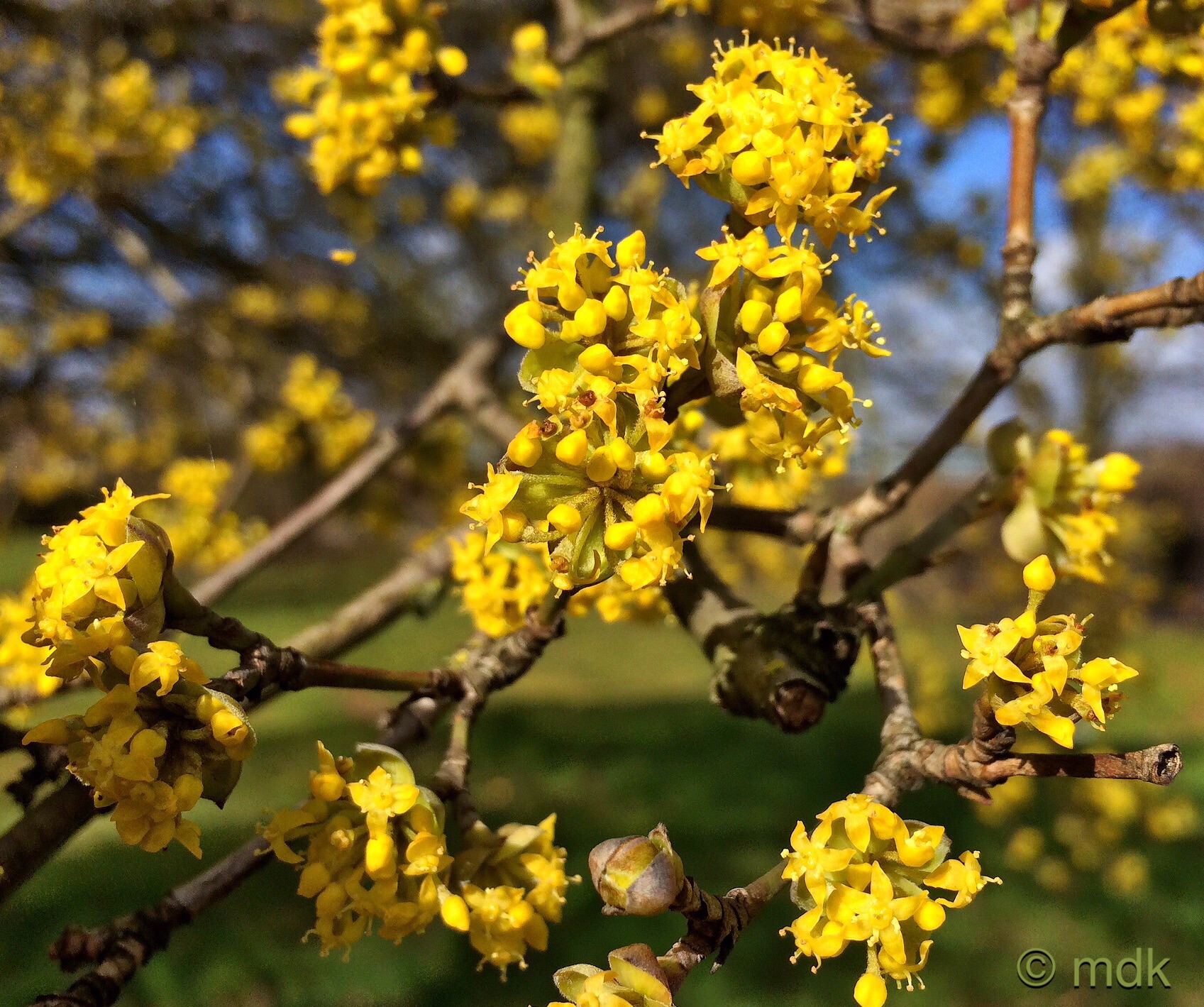 When I reached the Enchanted Park I couldn’t help but stop for a moment to admire the show of daffodils, right on cue for St David’s Day and another sign of spring. From there I made my way to the Bargate and crossed the wibbly wobbly bridge to Arundel Tower. On another day I might have stopped to take a photo of the bronze statue of John le Flemyng, the mayor back in 1315 but and there were other people crossing the narrow bridge. 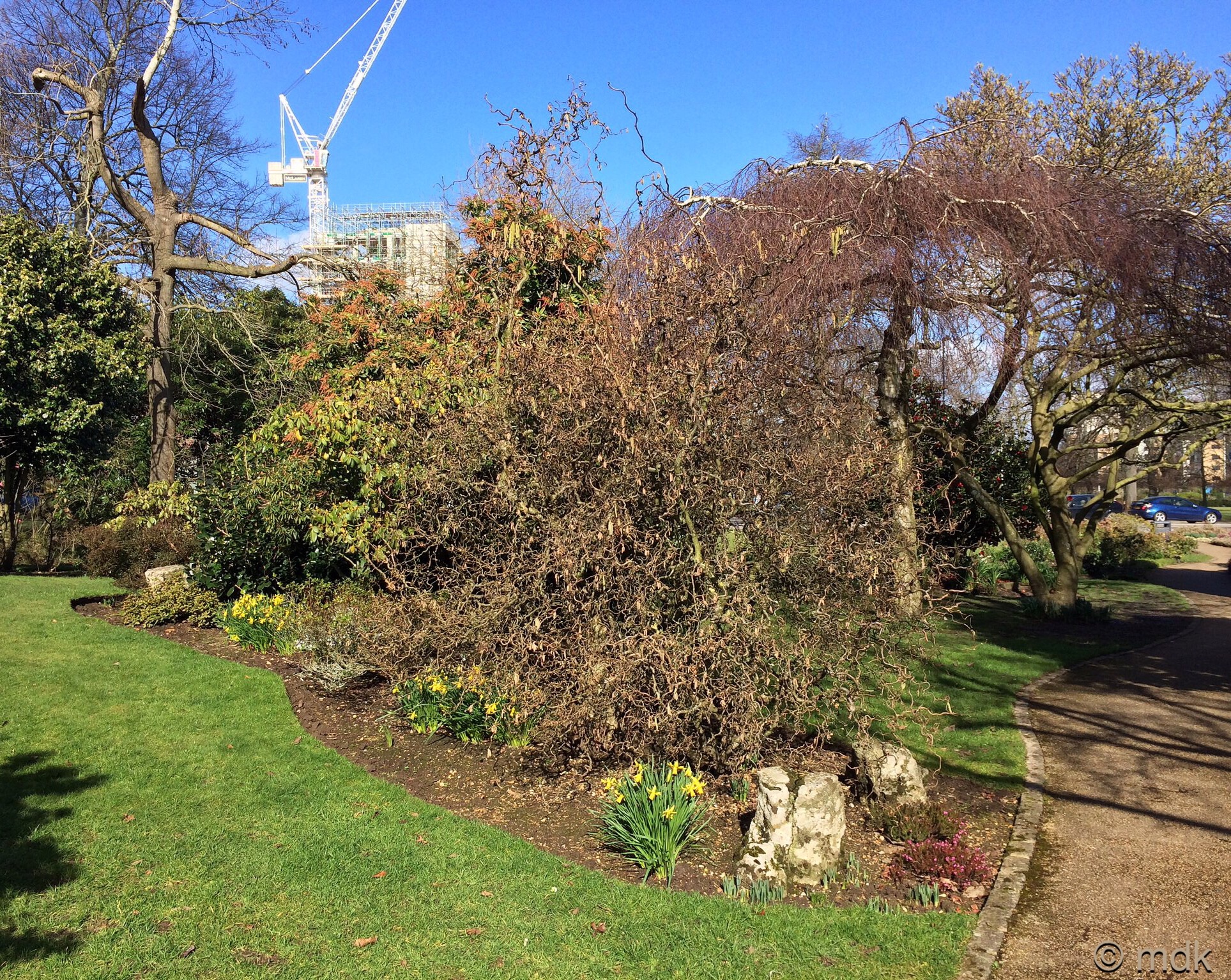 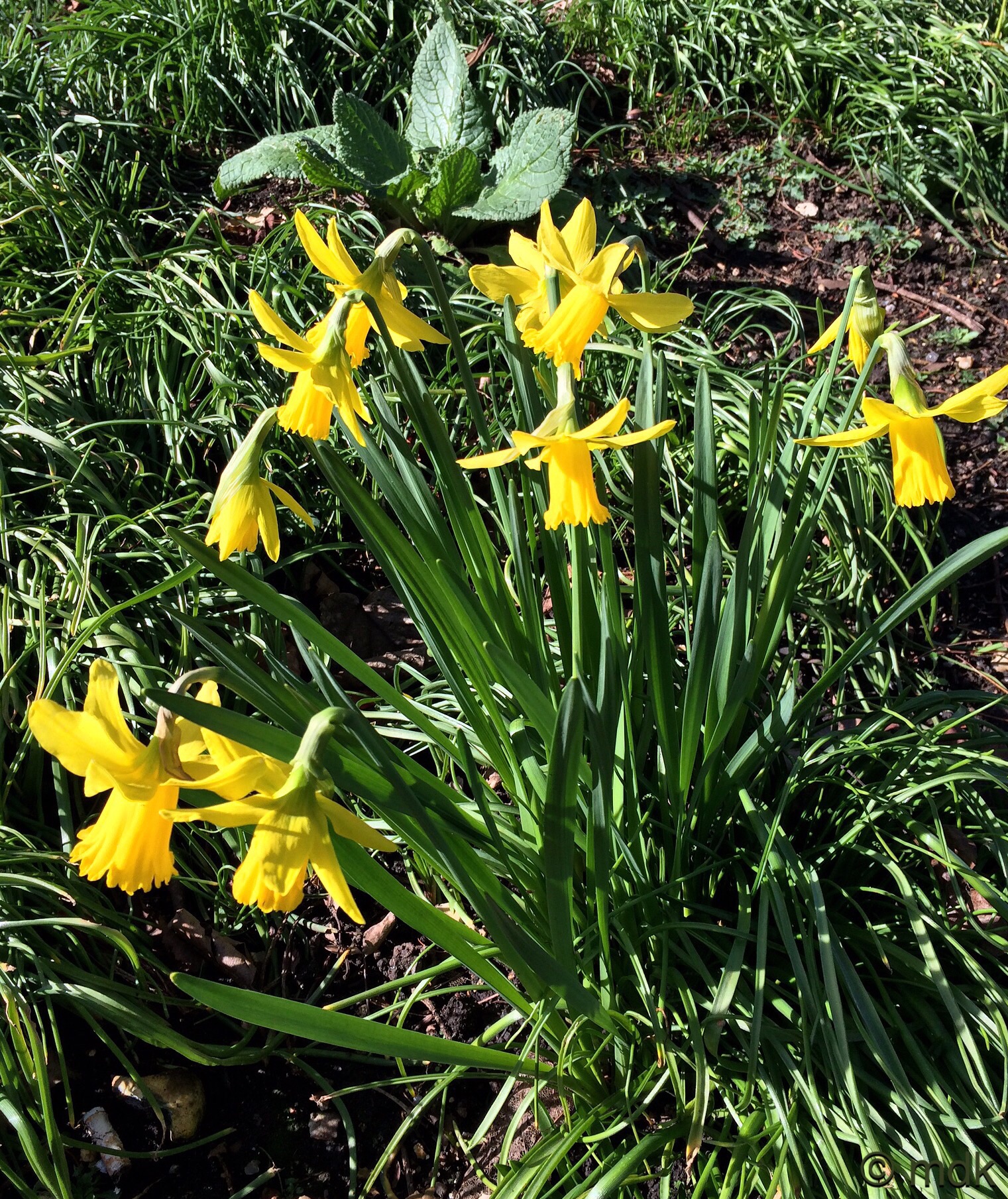 On the other side I couldn’t resist stopping for a picture of the steps from the bridge to the top of the tower. Arundel Tower was built some time in the thirteenth century and was remodleled in the fourteenth century when the western town wall was built. The governor of Southampton Castle at the time was Sir John Arundel, hence the name. The name may also refer to Hirondell, the magical horse of Sir Bevois, one of the mythical founders of Southampton. Legend has it that, when Sir Bevois died, the horse flung himself from the tower in sorrow. I know which story I prefer. 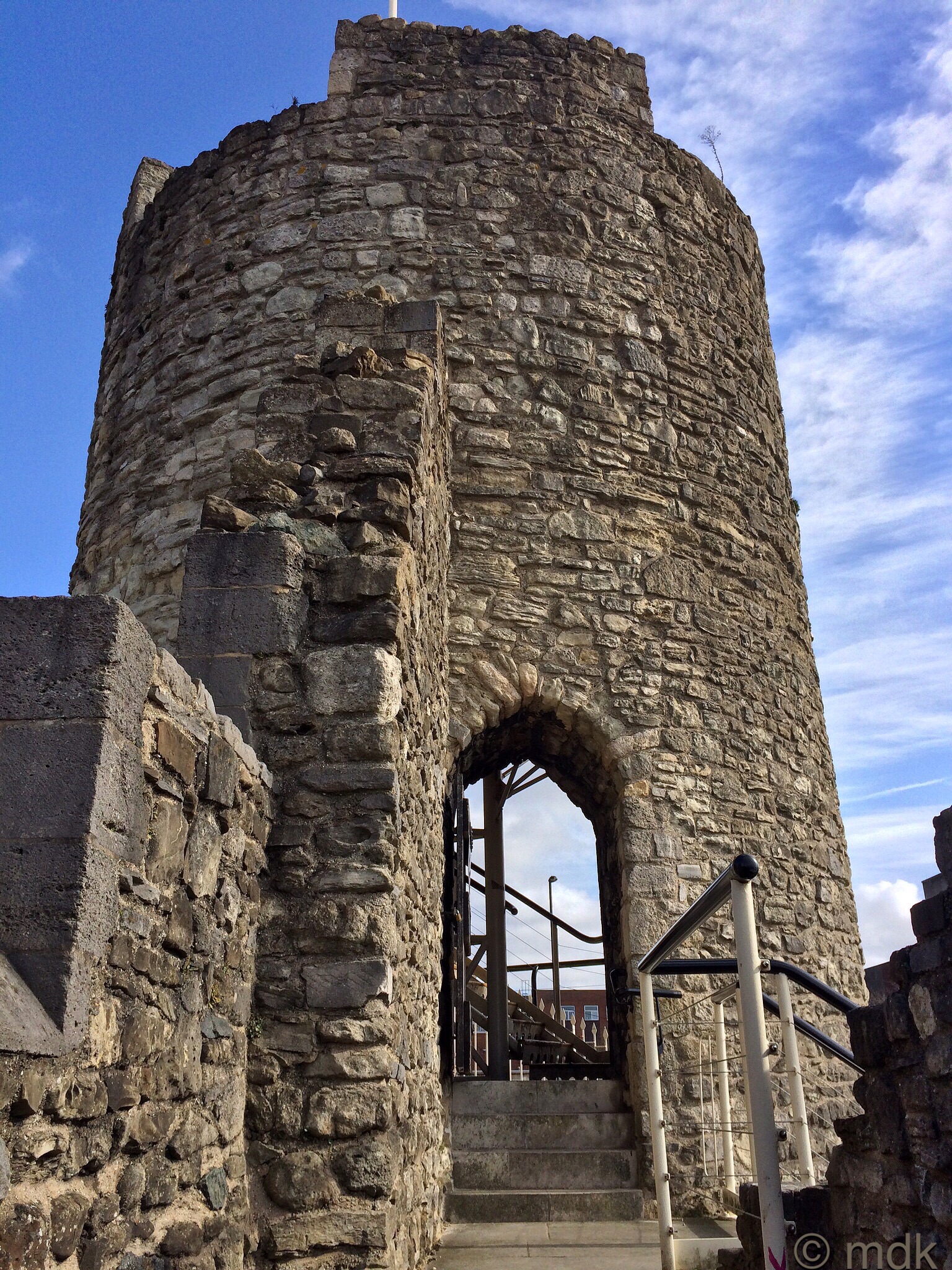 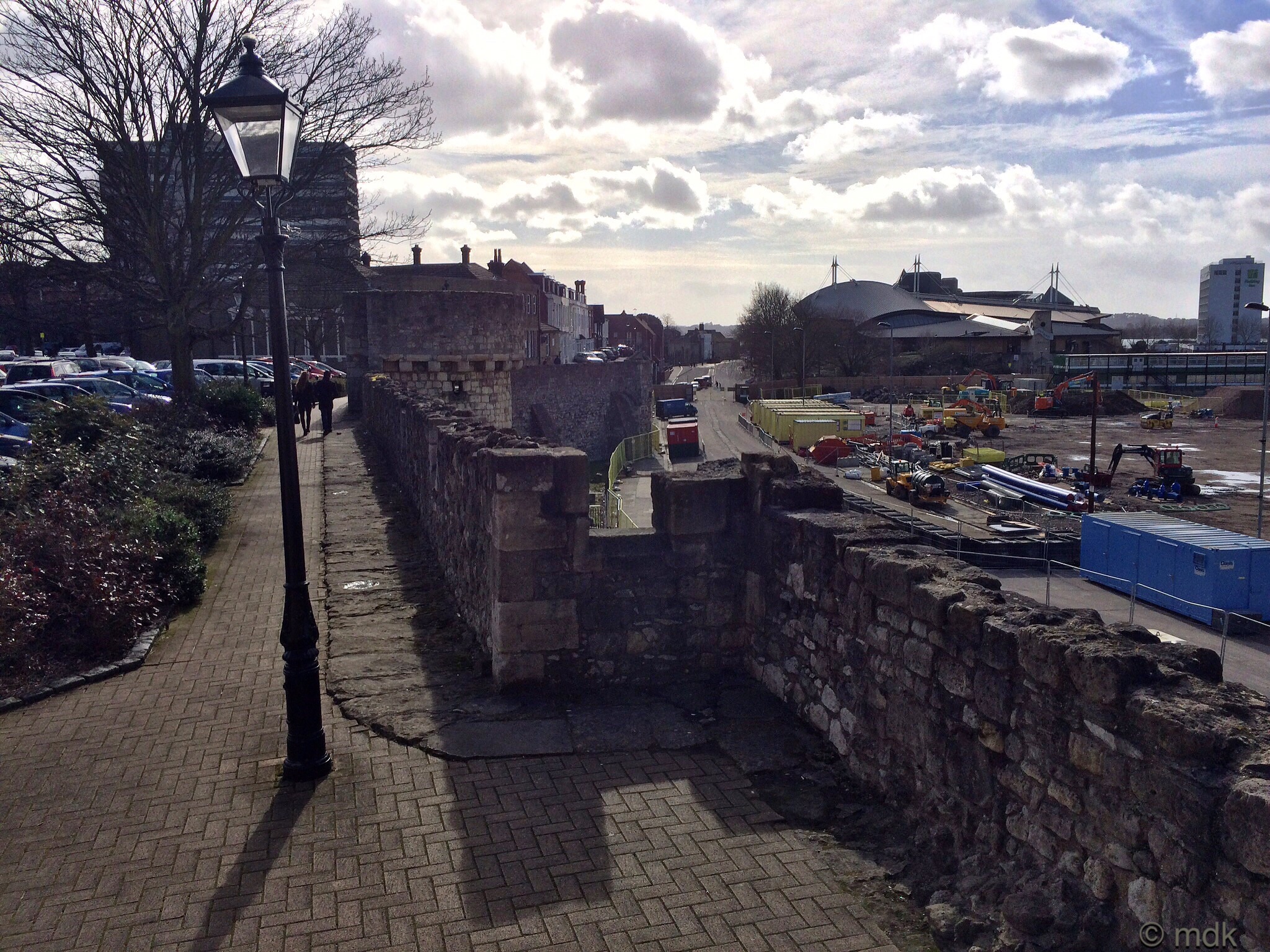 These days the inside of the tower is filled with a spiral staircase leading down to the battlements of the western walls. At the bottom I had a quick peek over the the side to check on the progress of the work on WestQuay phase II. To be honest it doesn’t look all that different to the last time I looked at the end of January except the sky was bluer and there was no ice this time. Although I was aiming for the castle, or the little that’s left of it, I got a little distracted taking pictures of the bridge I’d just crossed, the tower and the little gardens of moss on the top of the wall. 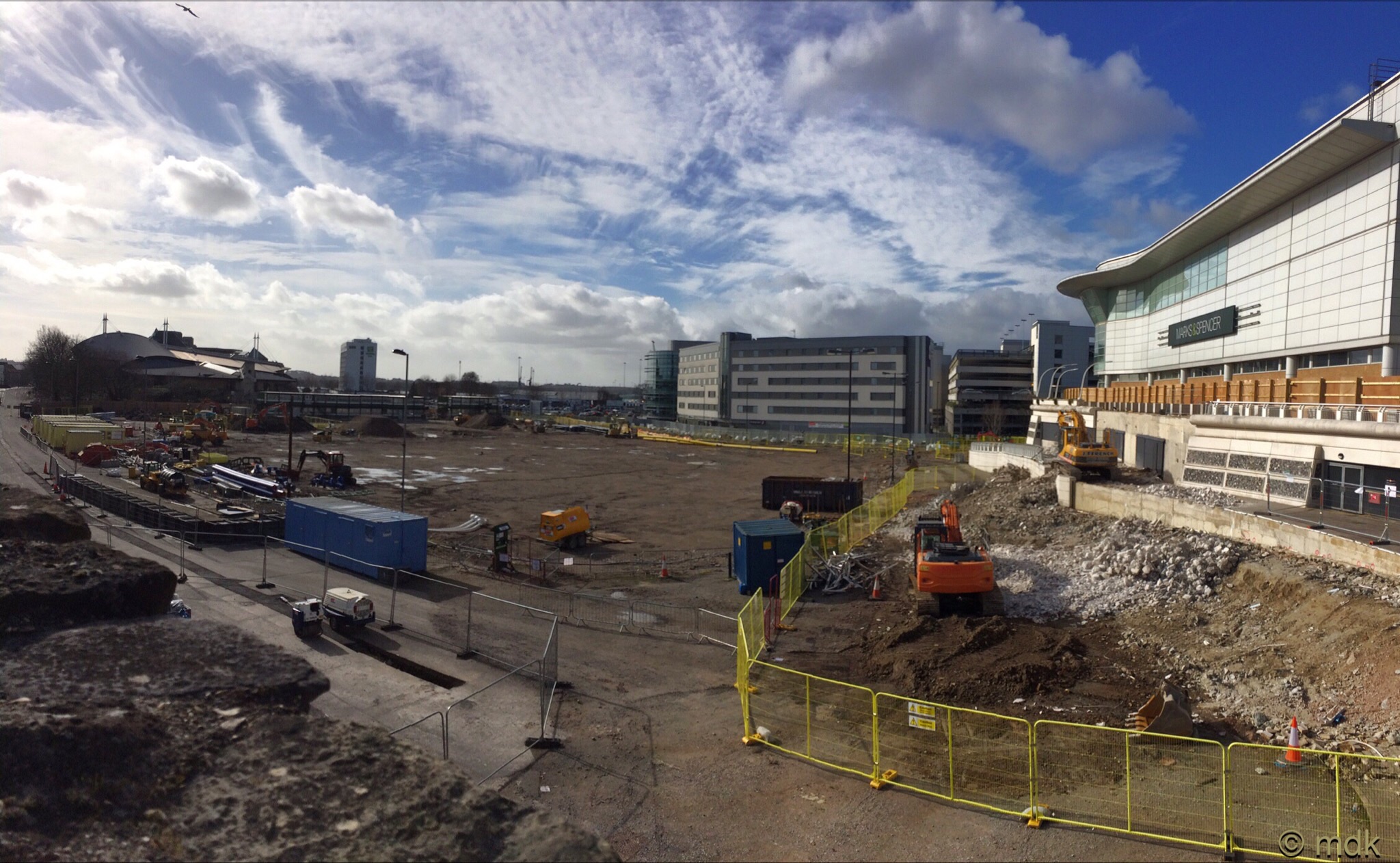 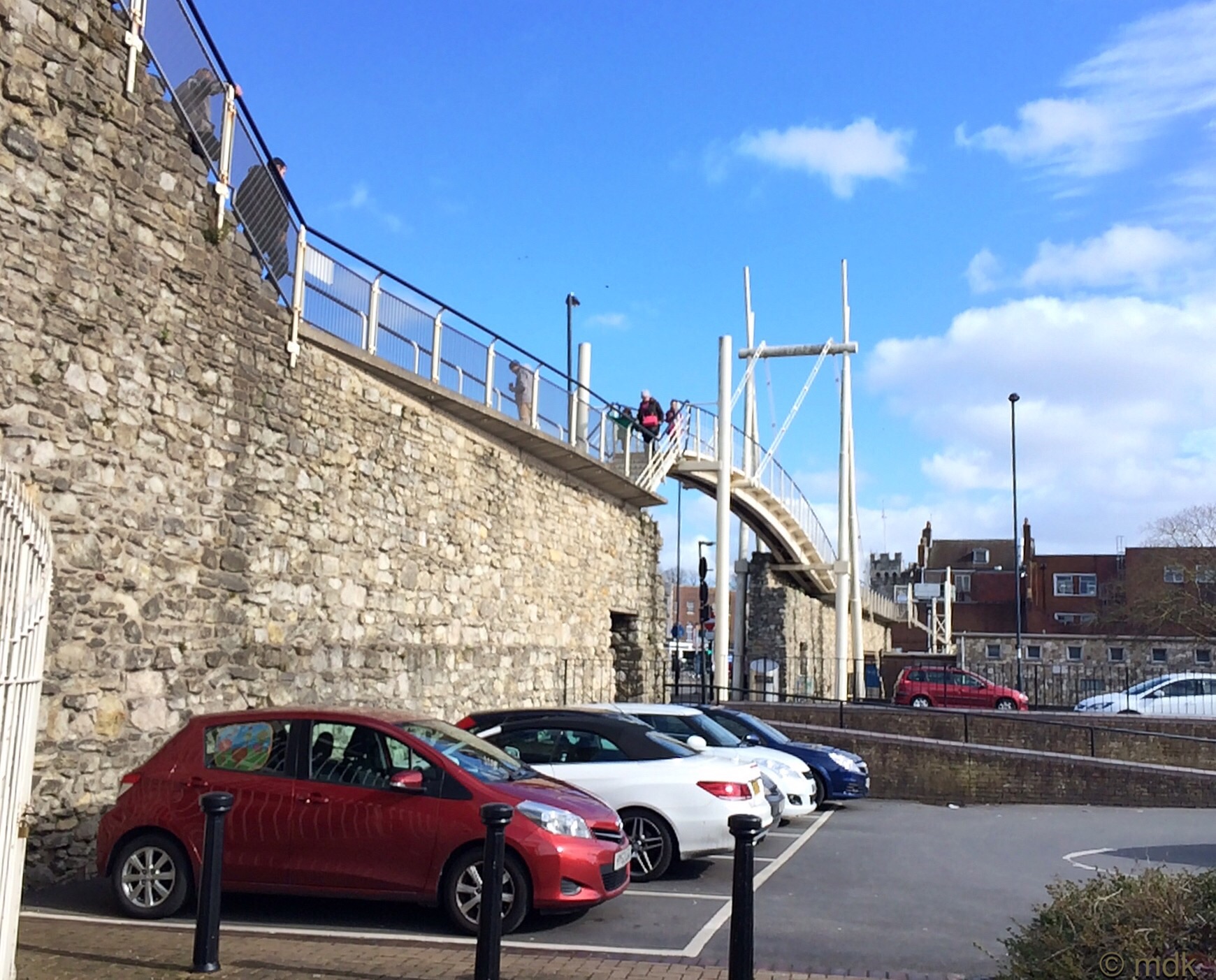 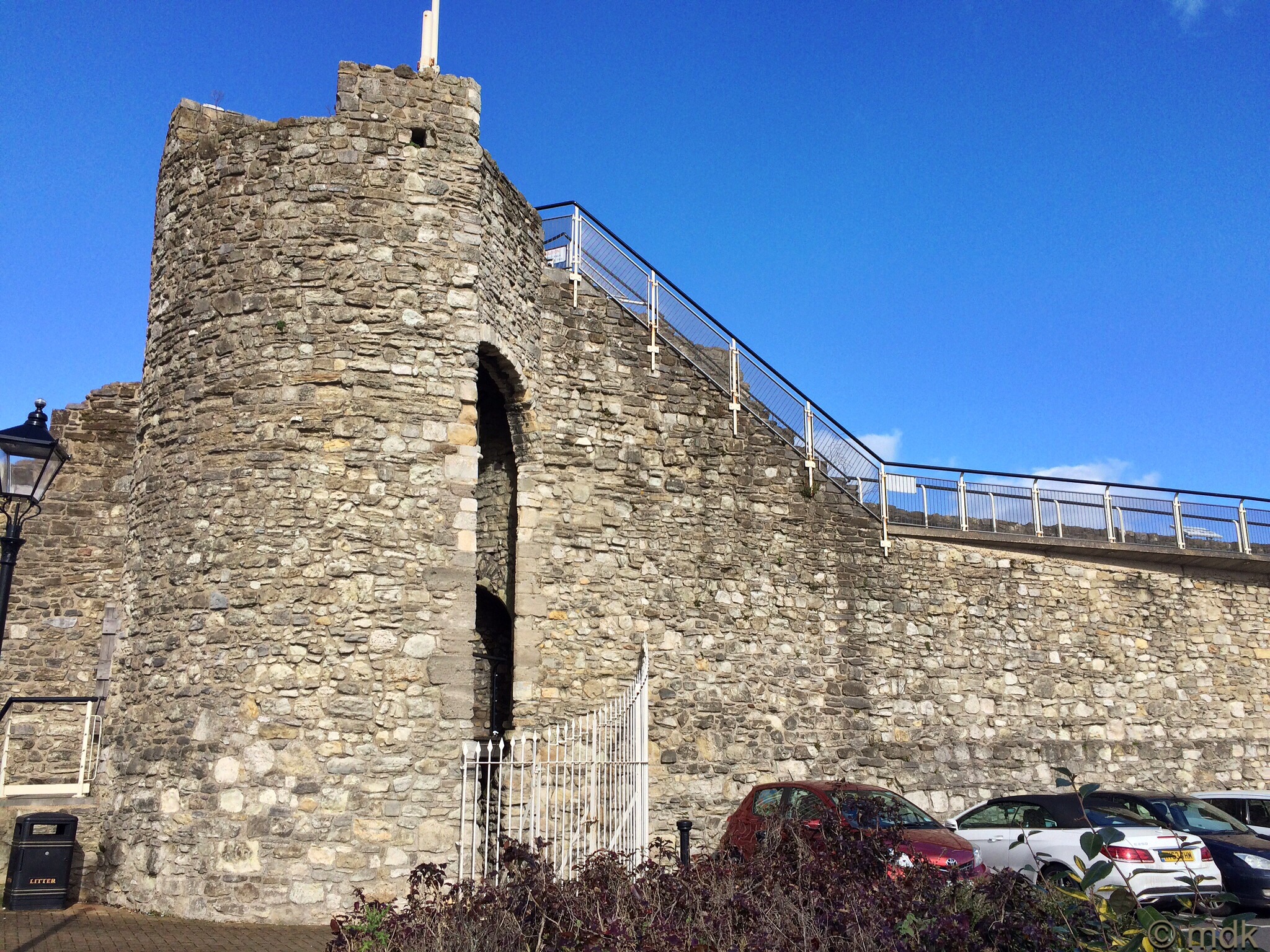 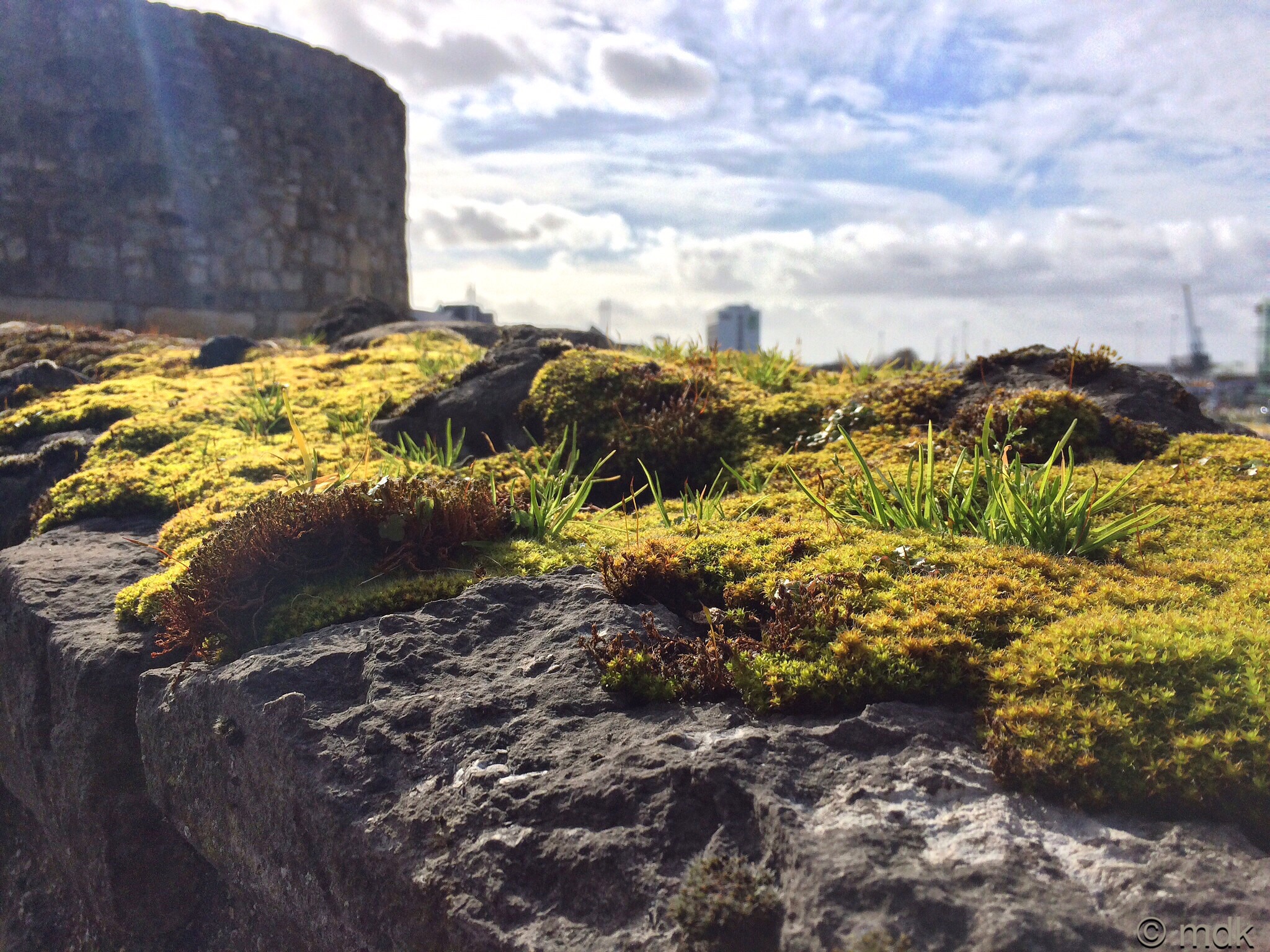 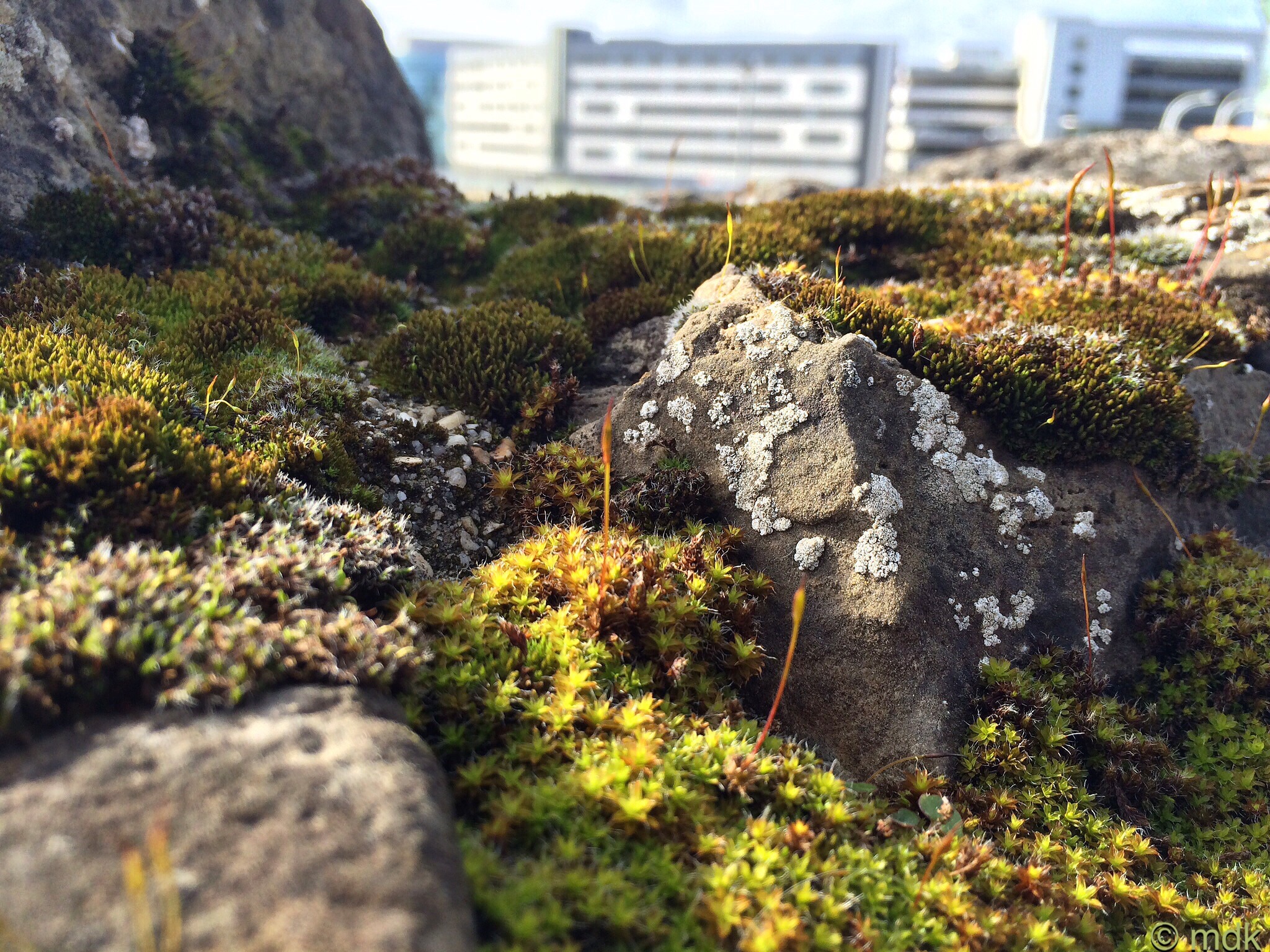 What I’d really have liked to take photos of is the outside of the castle wall, the trouble is the area is used as a car park and, even on a Sunday, it’s full with cars lined up in front of all the arches. Instead I made do with a close up of the machicolations at the top of Catchcold Tower, the intriguing little door in the same tower and the steps leading up to it. The only way to give an idea of what the outside of the castle wall looks like involved squeezeing behind parked cars and aiming along the line of the wall, even then I managed to get bits of car in shot. 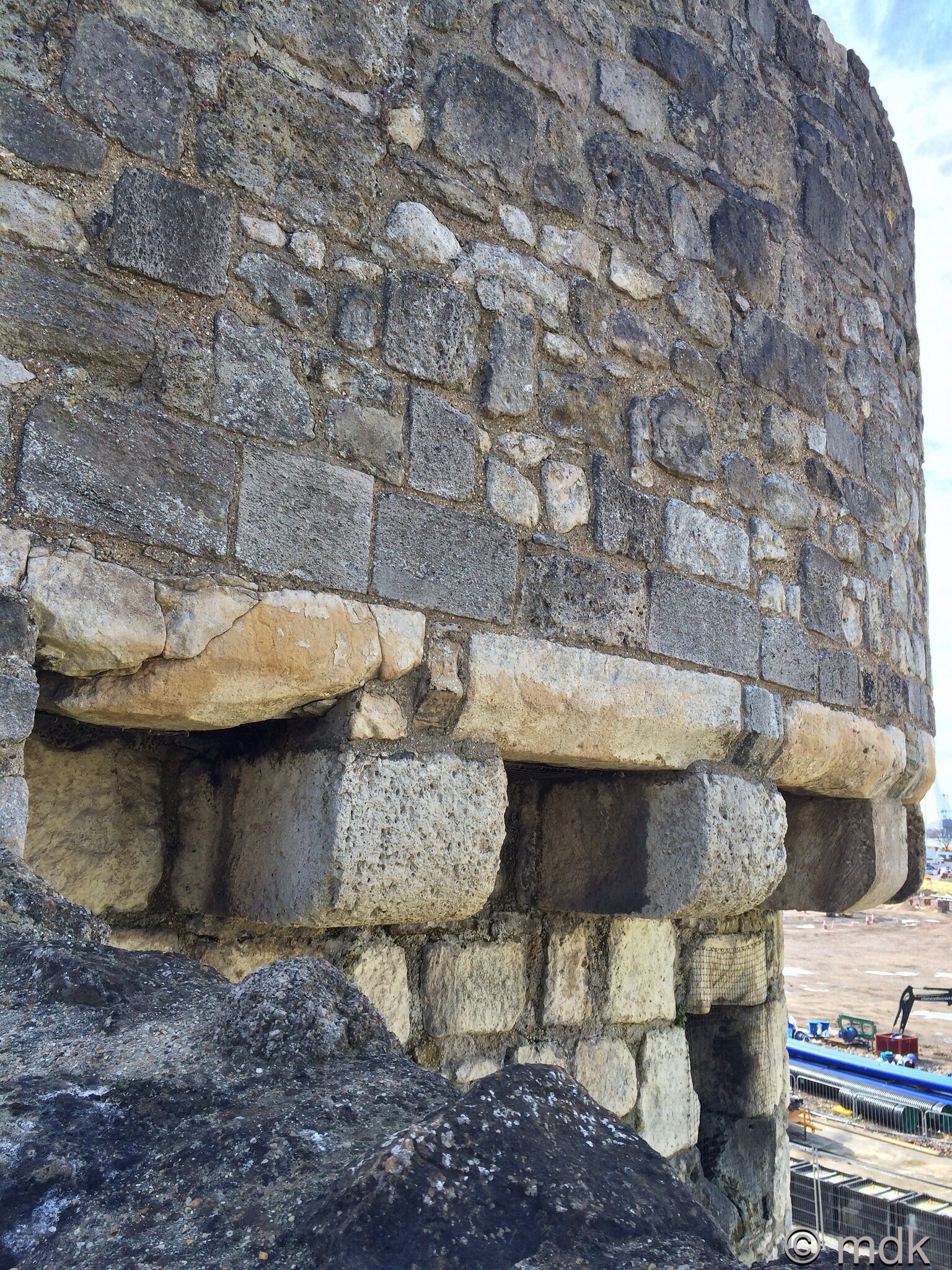 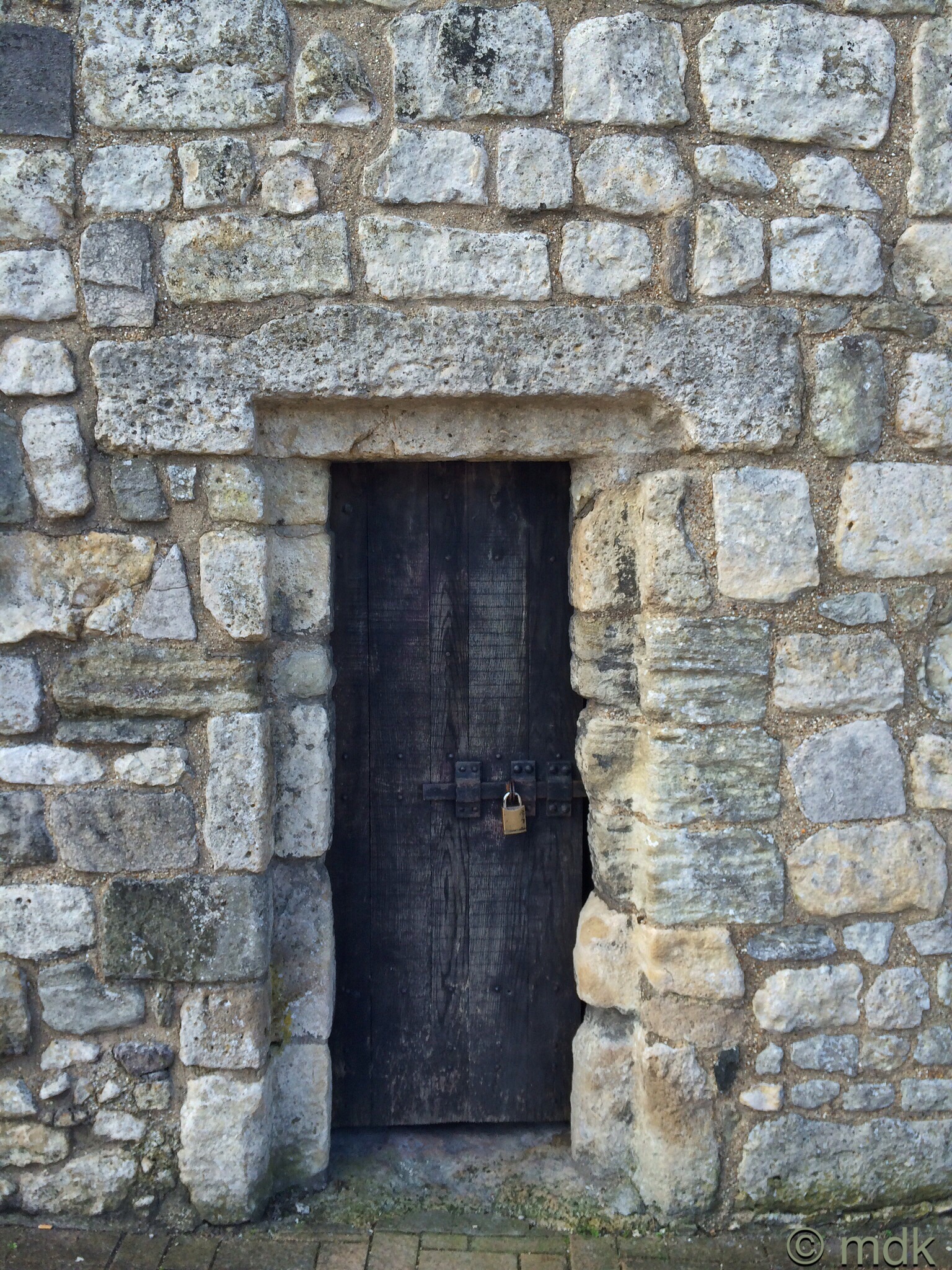 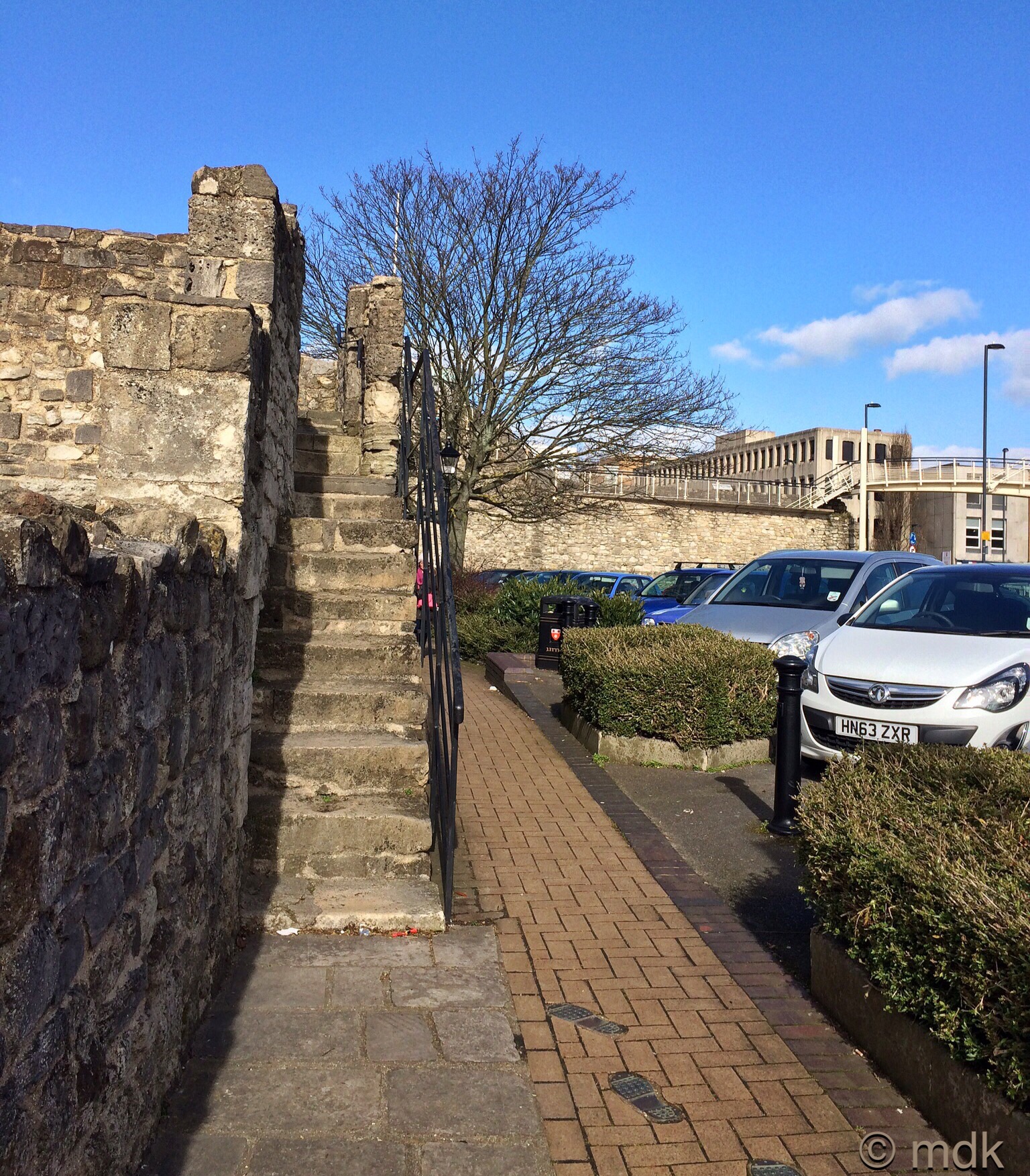 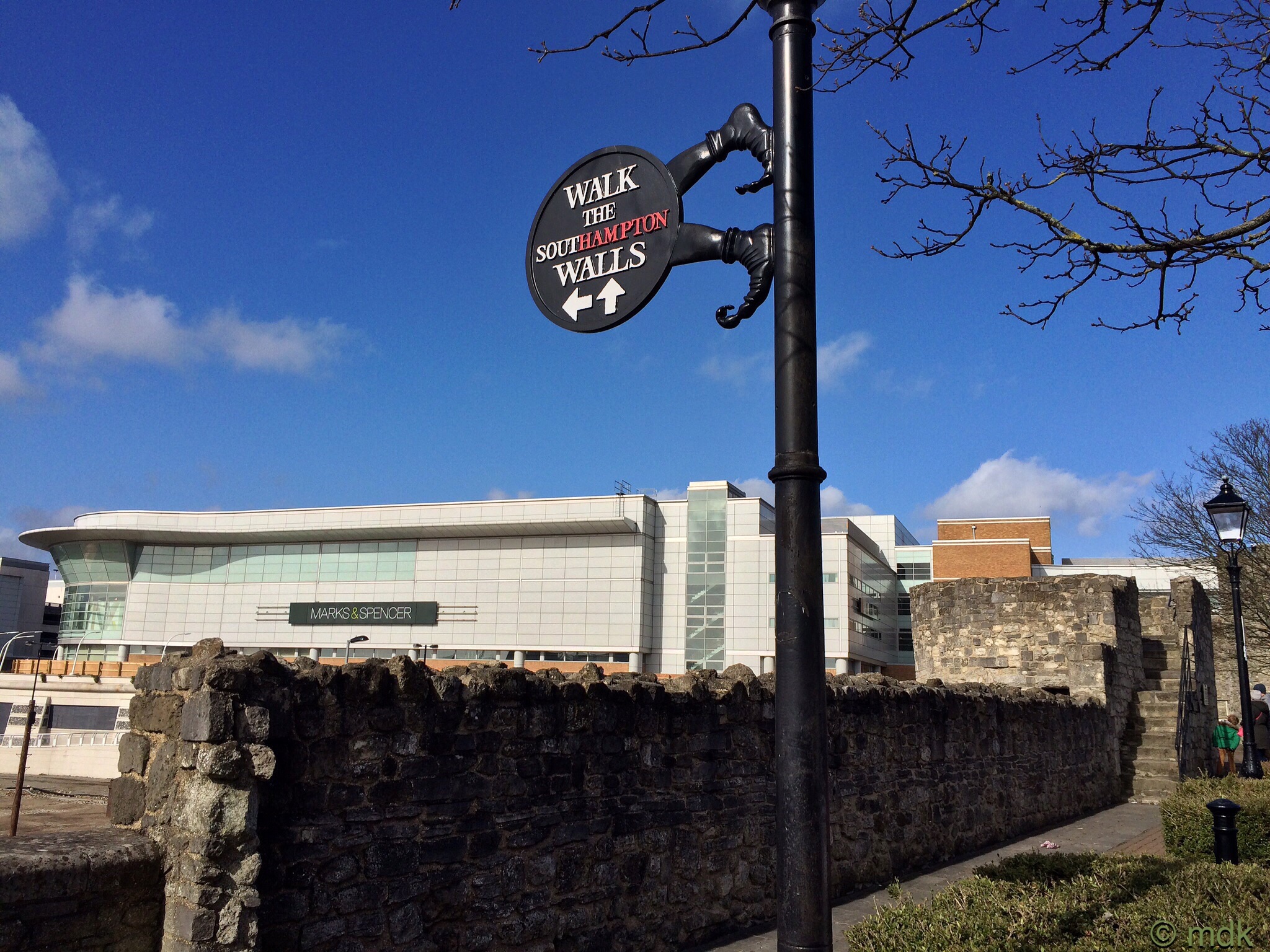 There is a gateway in the middle of the arches leading inside the castle but I wanted to use the main gate so I didn’t go through. Ok, so the castle gate is just some steps and the crumbling base of the original arch but it still gives an impression of how grand it must have once been. The castle was built after the Norman Conquest and used by the King  and his court when they were on the way to France. Initially it was a wooden motte and bailey castle, a design brought to England by the Normans when they invaded. There would have been a keep on a raised earthwork, or motte,  probably using an existing hill. This was surrounded by an enclosed courtyard, or bailey outside of which was a protective ditch and palisade. 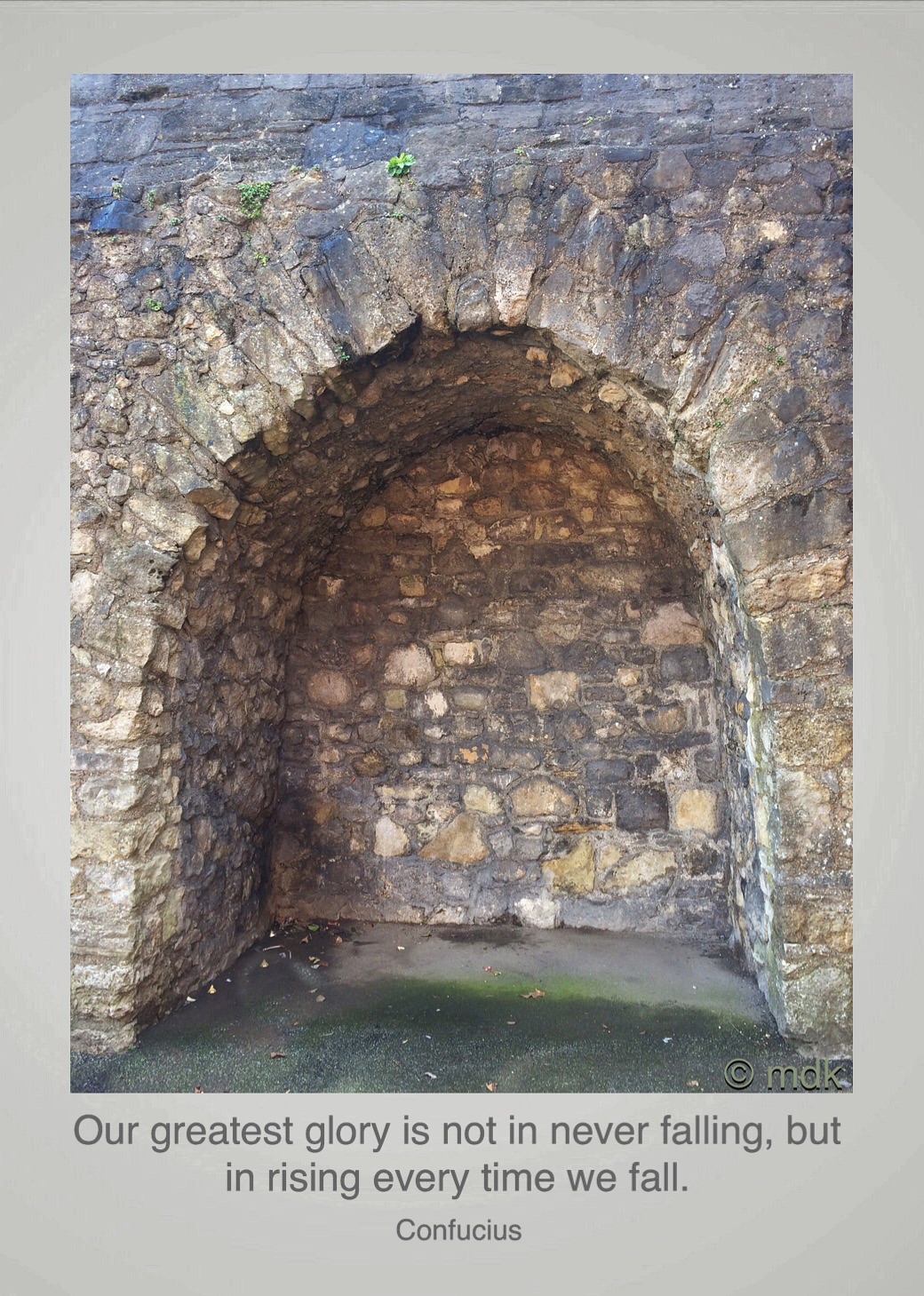 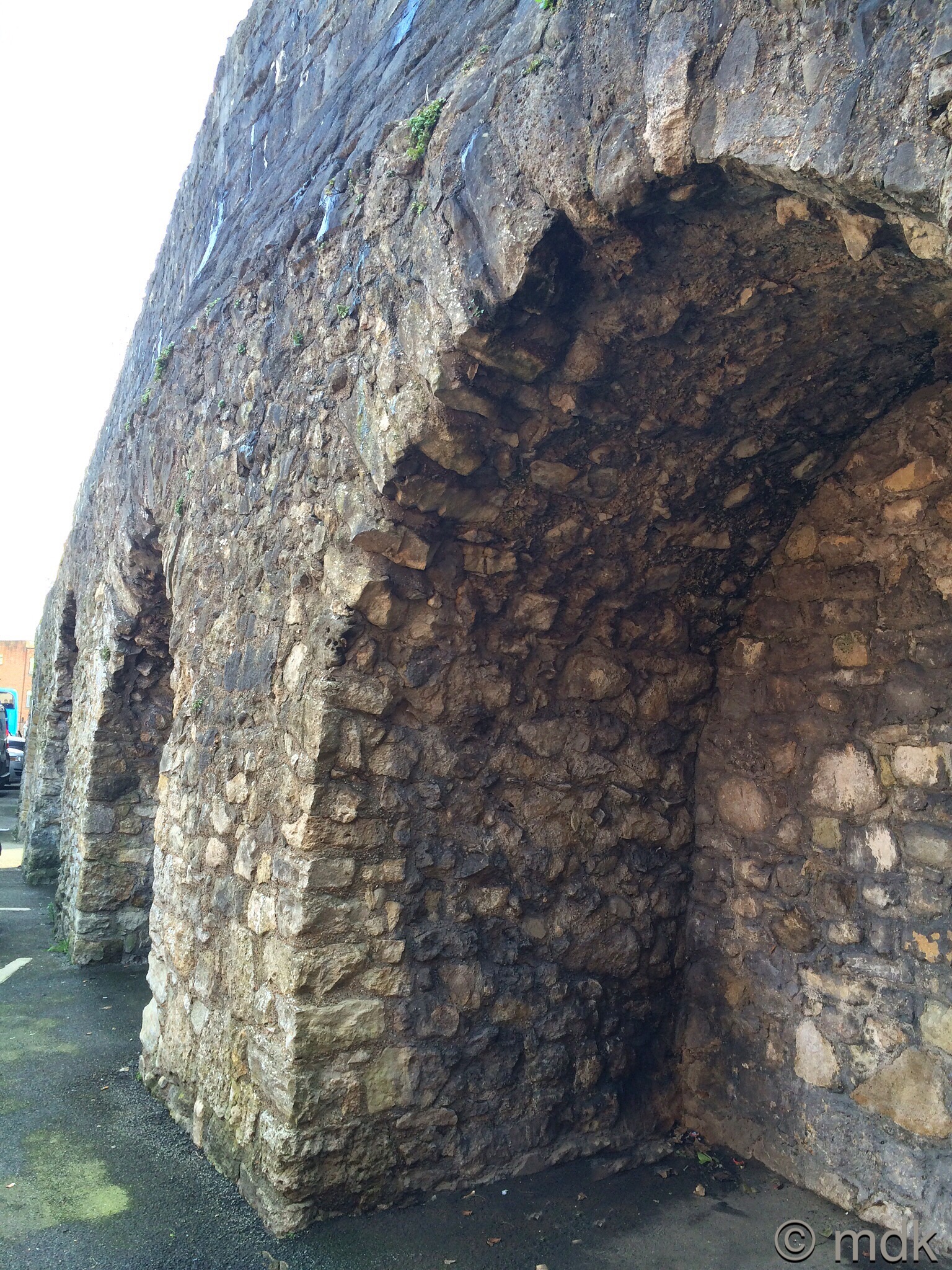 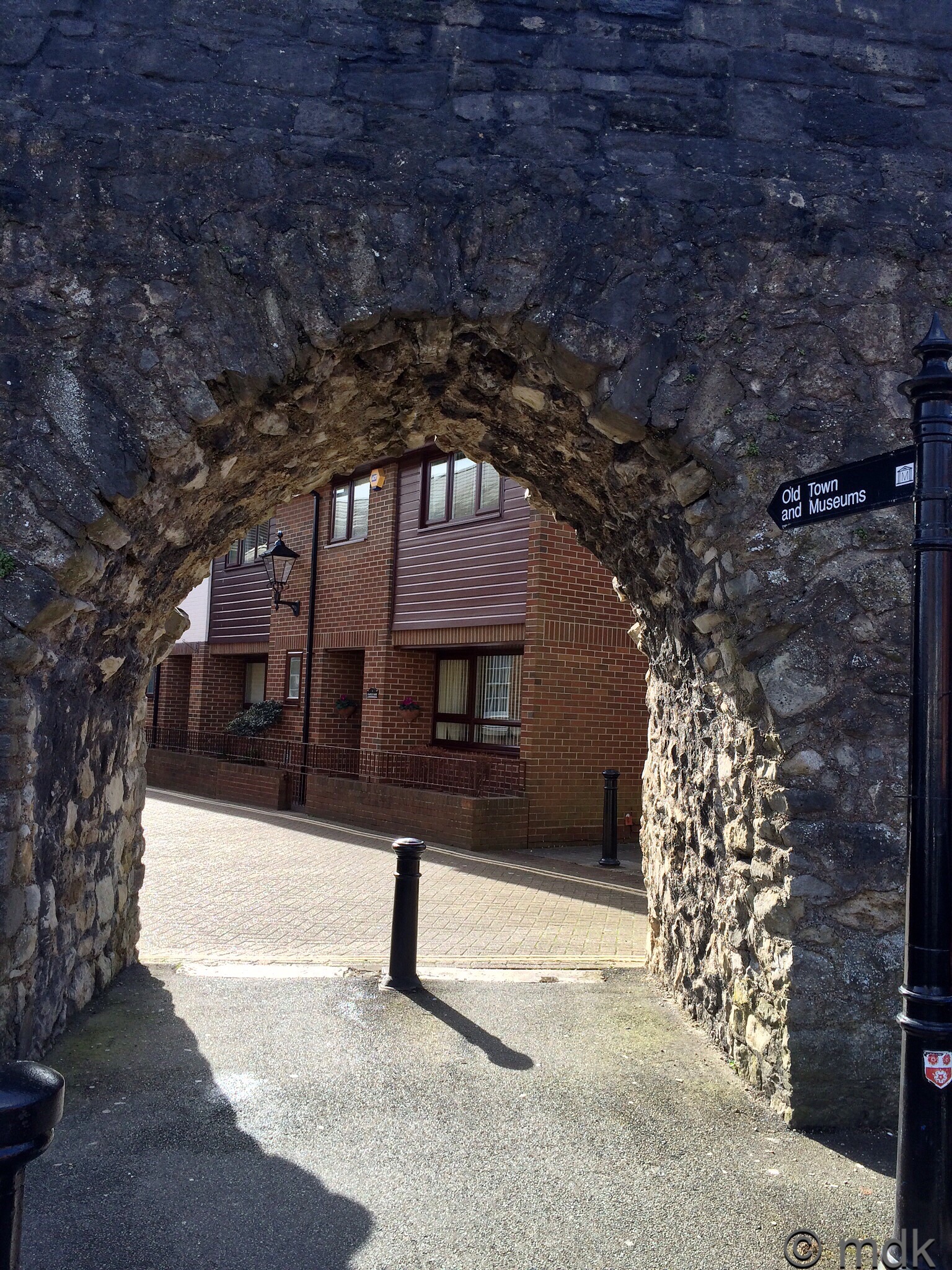 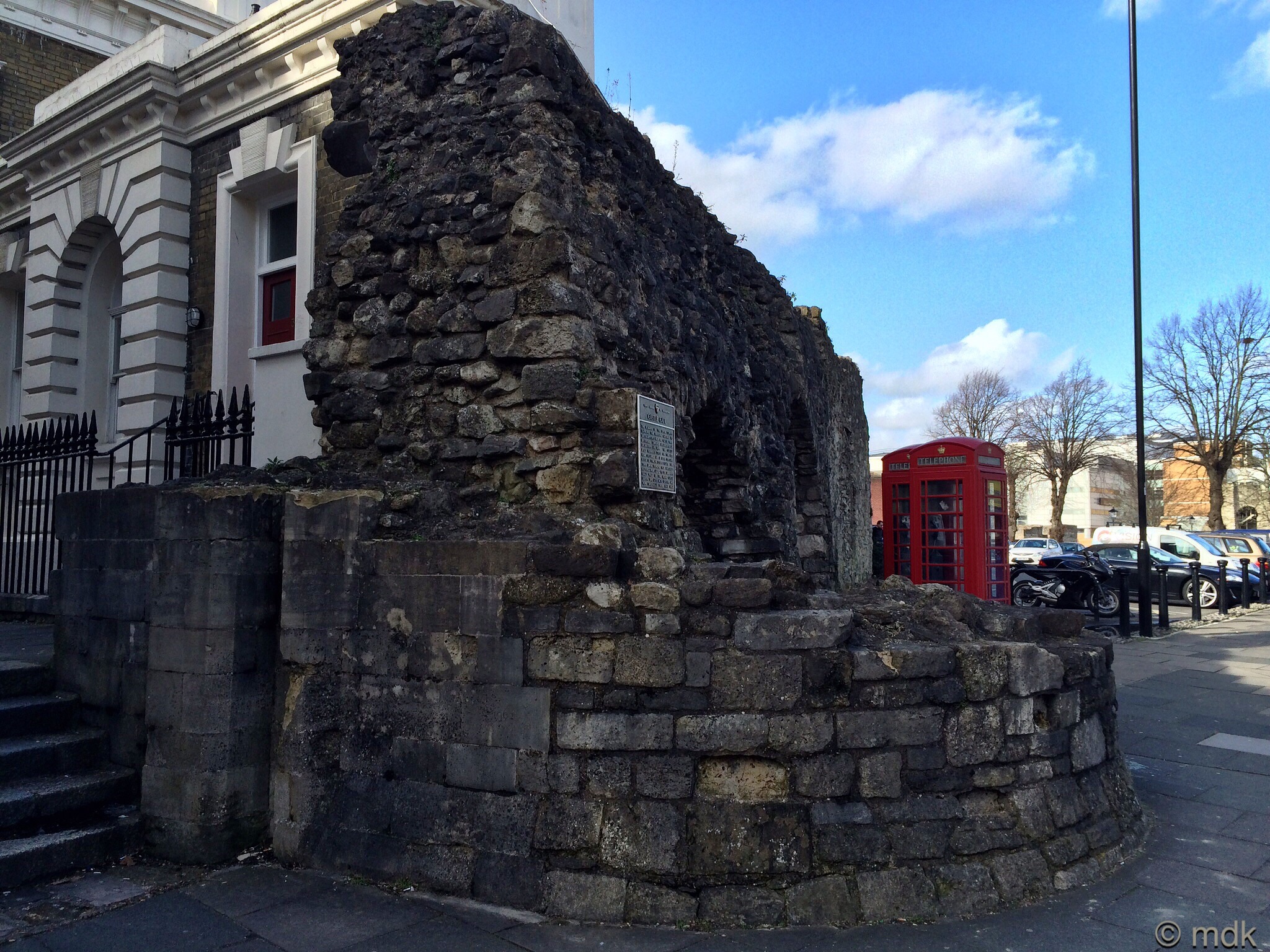 In the early 1100’s while Stephen and Matilda wrangled over the throne, William le Gros, bishop of Winchester, held the castle. Then, in 1153, Henry II came to the throne and took it back. Because of the threat of raids by the French, he wanted to improve England’s defences in the south of England and, by the late twelfth century, the castle had been rebuilt in stone.

Sadly there are no pictures of the castle as it was so all I could do was imagine using the little that is left. In fact  all that remains of the castle today is this fragment of wall, the vaults and the watergate leading out onto Western Esplanade. The gate I went through was almost certainly the outer gate and the part I was interested in today was the inner wall, the back side of the arched wall bordering the car park. These days the area once occupied by the keep is now filled by buildings, some modern, some quite historic in their own right. The gate leads to Castle Lane and to the right is Madison Street, two rows of terraced houses, one old, one new with the arch of the castle wall at the end.

Behind the houses the arches of the outer wall form a secluded area where trees have been planted. Some gardens actually have the wall as a boundary and peeping through a garden gate I could see wheelie bins, incongruous against the ancient stone. Although there wasn’t a great deal to see I stood for a while trying to imagine what it would be like to live cheek by jowl with so much history. Imagine too, if those walls could talk, what a tale they’d have to tell. 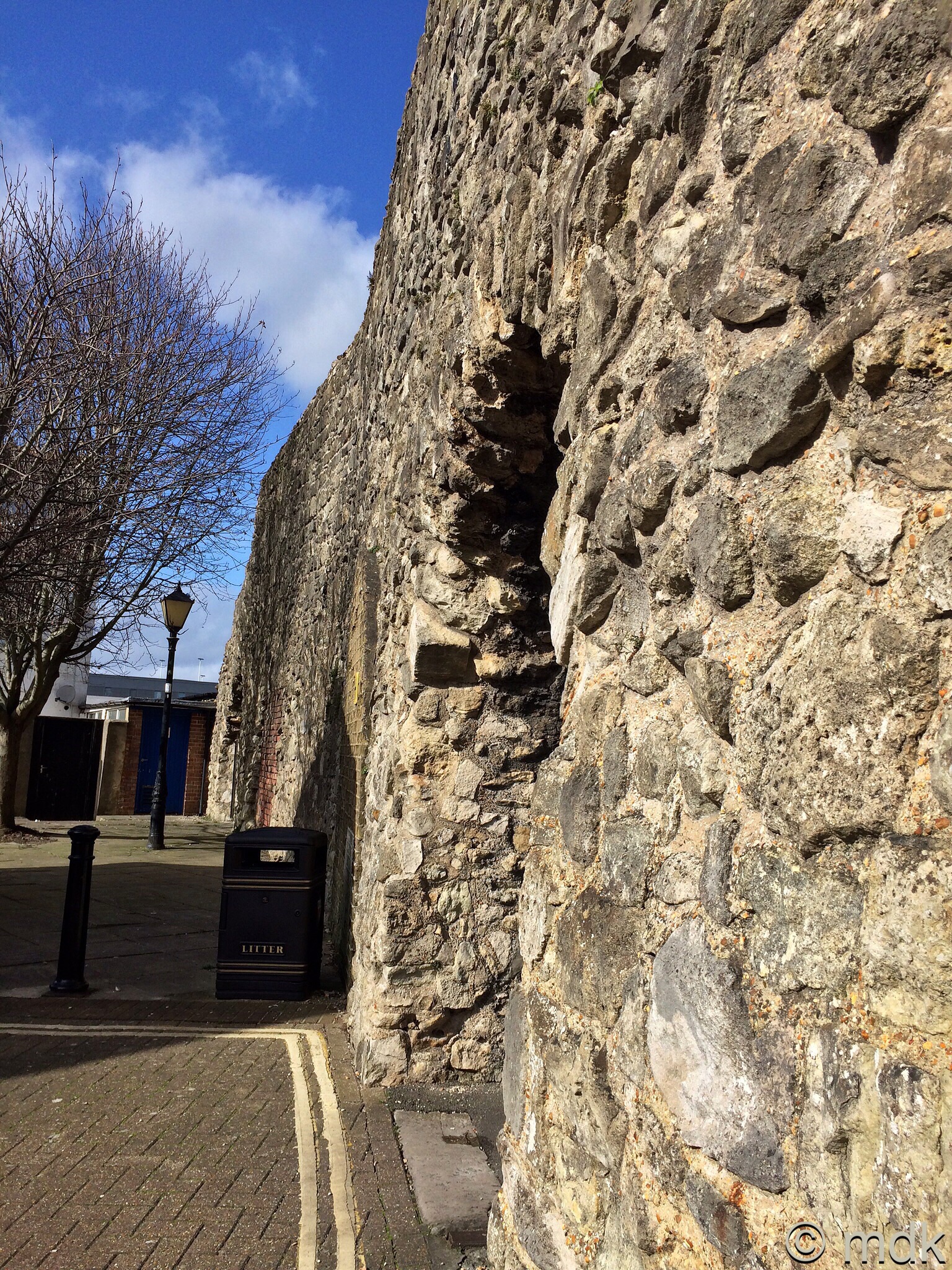 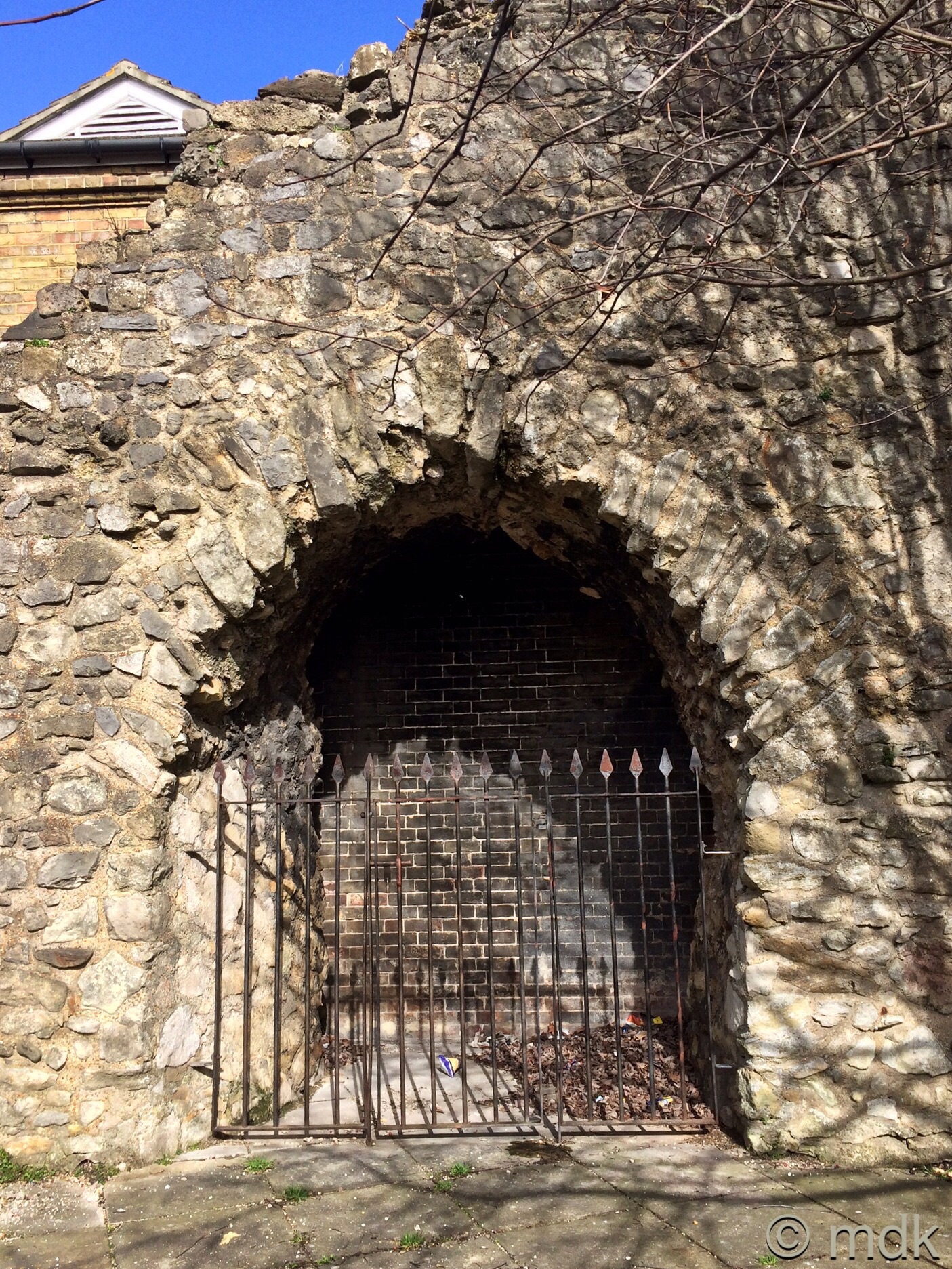 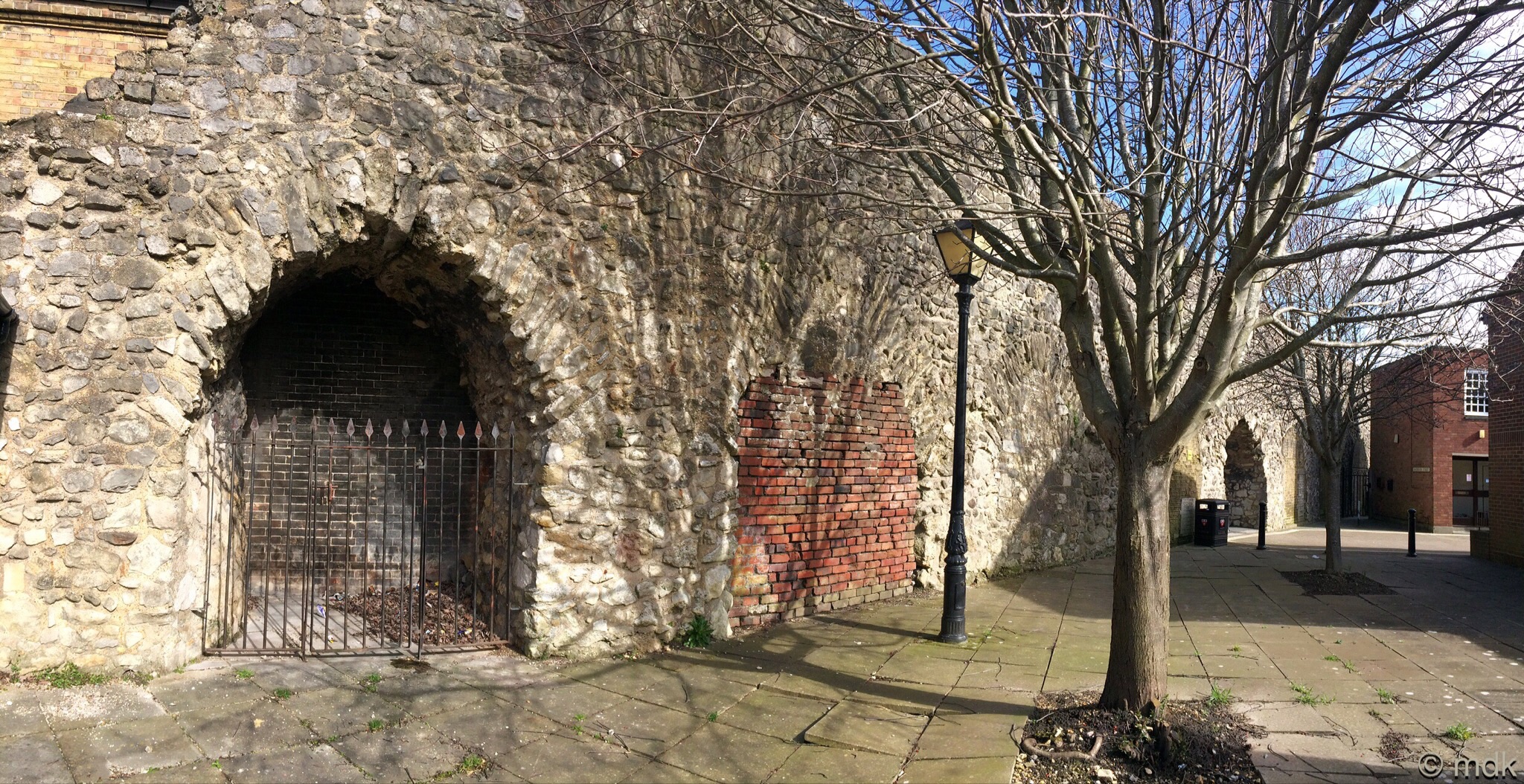 Over the years the fortunes of the castle rose and fell, mostly depending on England’s relationship with France. By the end of the thirteenth century, the castle was in decline until further fears of raids by the French led to Richard II ordering extensive rebuilding and, in the 1370 s he added cannon, making this one of the first castles in the country to have them.  This boom period (excuse the pun) didn’t last though and by the end of the sixteenth century the inner Bailey was basically a rubbish dump. In 1618, James I sold it to property speculators. At one point local merchant George Gallop built a windmill on the motte and bits and pieces of stone were taken to strengthen the town walls. Southgate and Castle Eastgate were demolished in the late eighteenth century.

There was a brief revival in 1808 when the  Marquis of Landsdowne built a gothic mansion on the motte using some of the stones from the keep. Once again Southampton had a castle of sorts. It didn’t last. In 1818 Landsdowne Castle was demolished and most of the motte flattened. This really was the end of the castle in all its many forms.

There is still a hill of sorts, running from Castle Lane to Castle Way, it’s called Landsdowne Hill and there are some attractive old red brick buildings lining it. The most historic building though is the Juniper Berry pub. Sadly, it’s nowhere as old as it looks, being built, as far as I can tell, in the 1880’s but it was built on the site of Jane Austen’s Southampton home. The front faces Western Esplanande and Jane liked to walk along the shore there. This was before the land was reclaimed and the sea came right up to the walls. 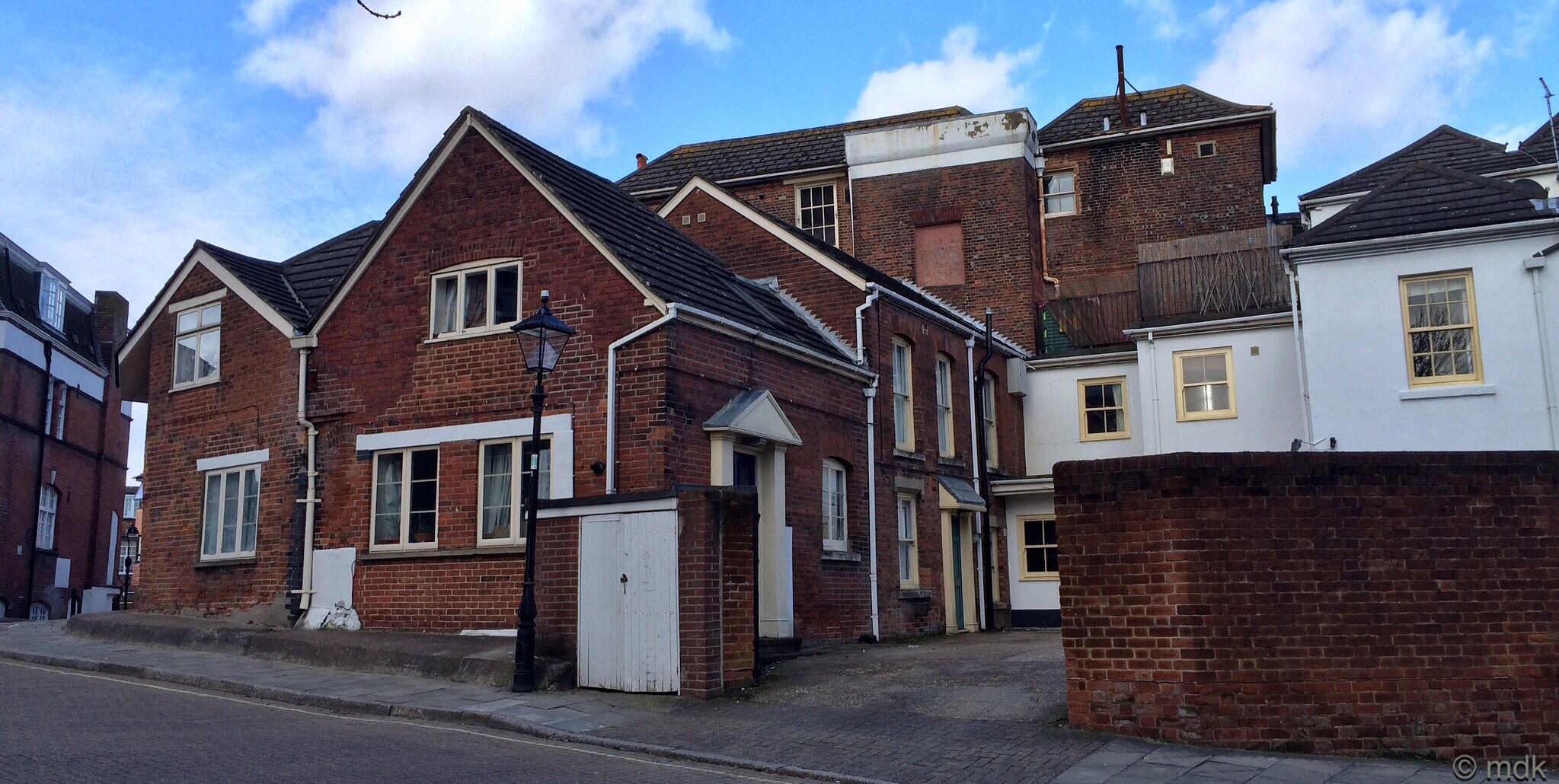 Another interesting building is the old County Court House, built in the 1850’s it’s a beautiful old yellow brick building  right inside the castle gate and has some rather impressive mouldings above the main arched doorway. Interestingly, there was a World War II surface air raid shelter build at the back against the castle wall. It was mentioned as being present as recently as 1999, I wonder if it’s still there? 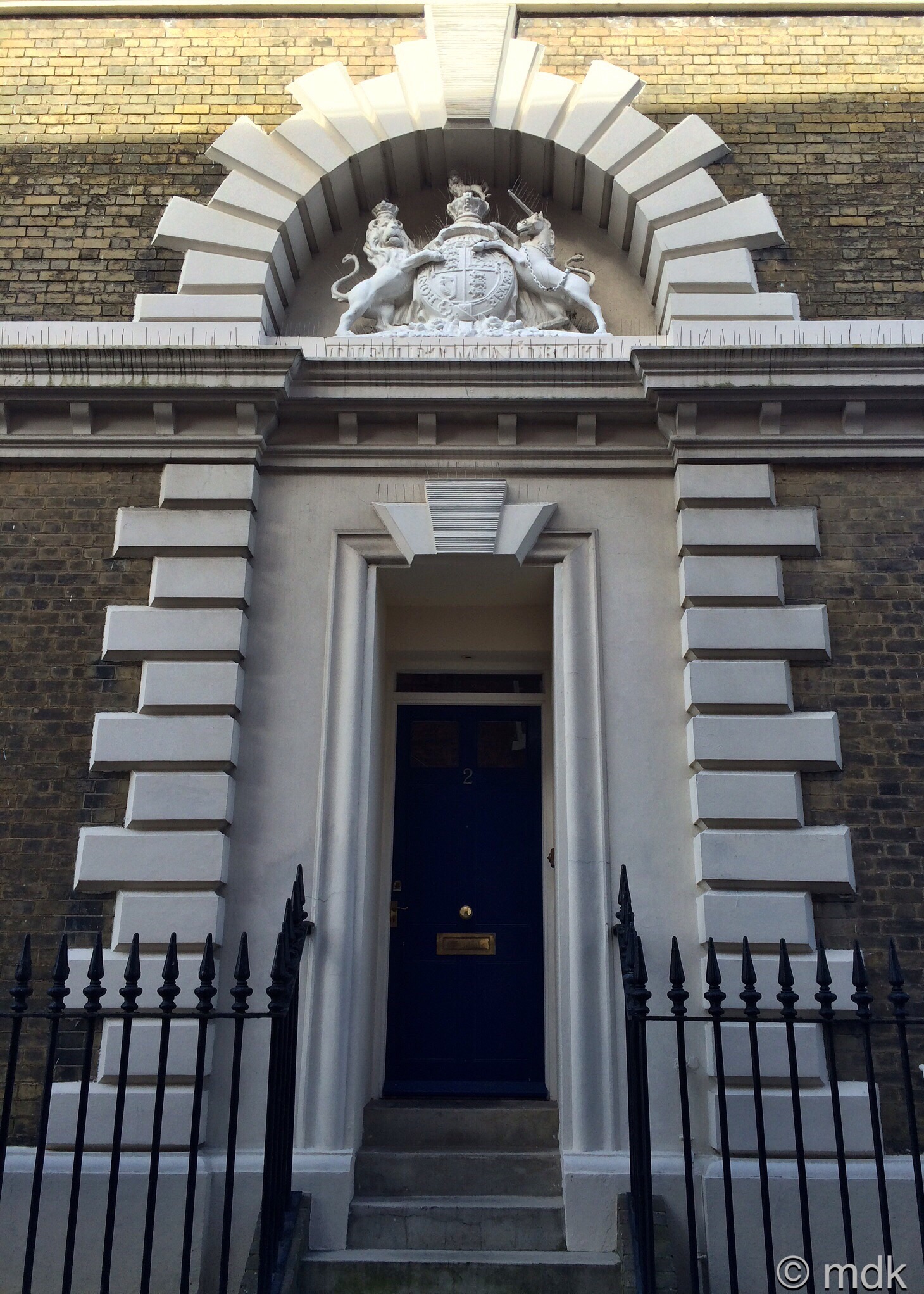 Of course there is much more to see in this area behind the castle wall, including St Michael’s Square and Tudor House but it was the wall itself I’d come to see, anything else was purely incidental. Besides, I guessed Commando would probably be back from his fifteen mile London Marathon training run soon so it was time to go back out of the gate and make for home. That was the plan anyway but, once I was out on the street with the back of the Bargate in front of me, I couldn’t help noticing how close I was to Costa Coffee. I’ll let you guess what happened next… 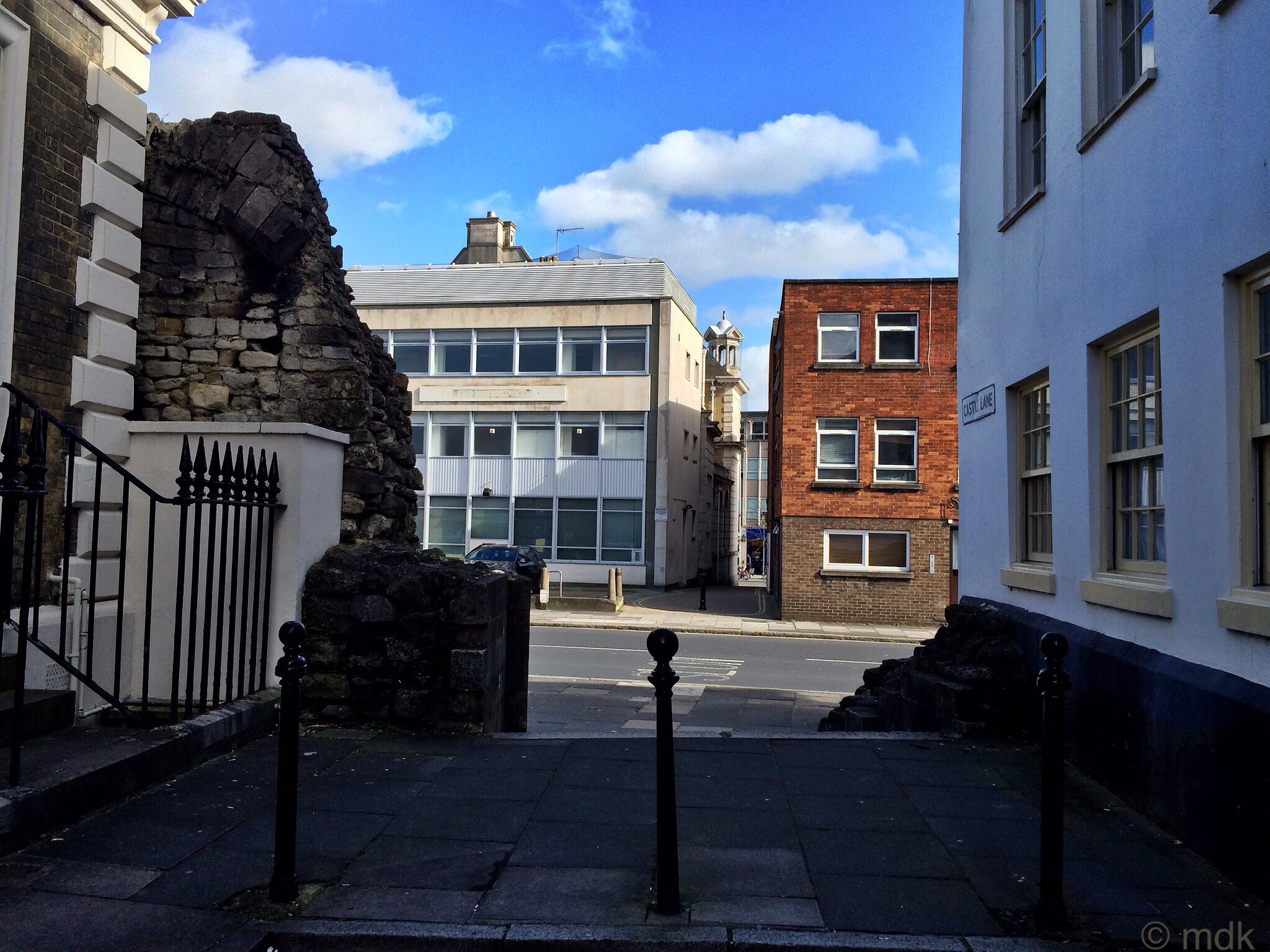 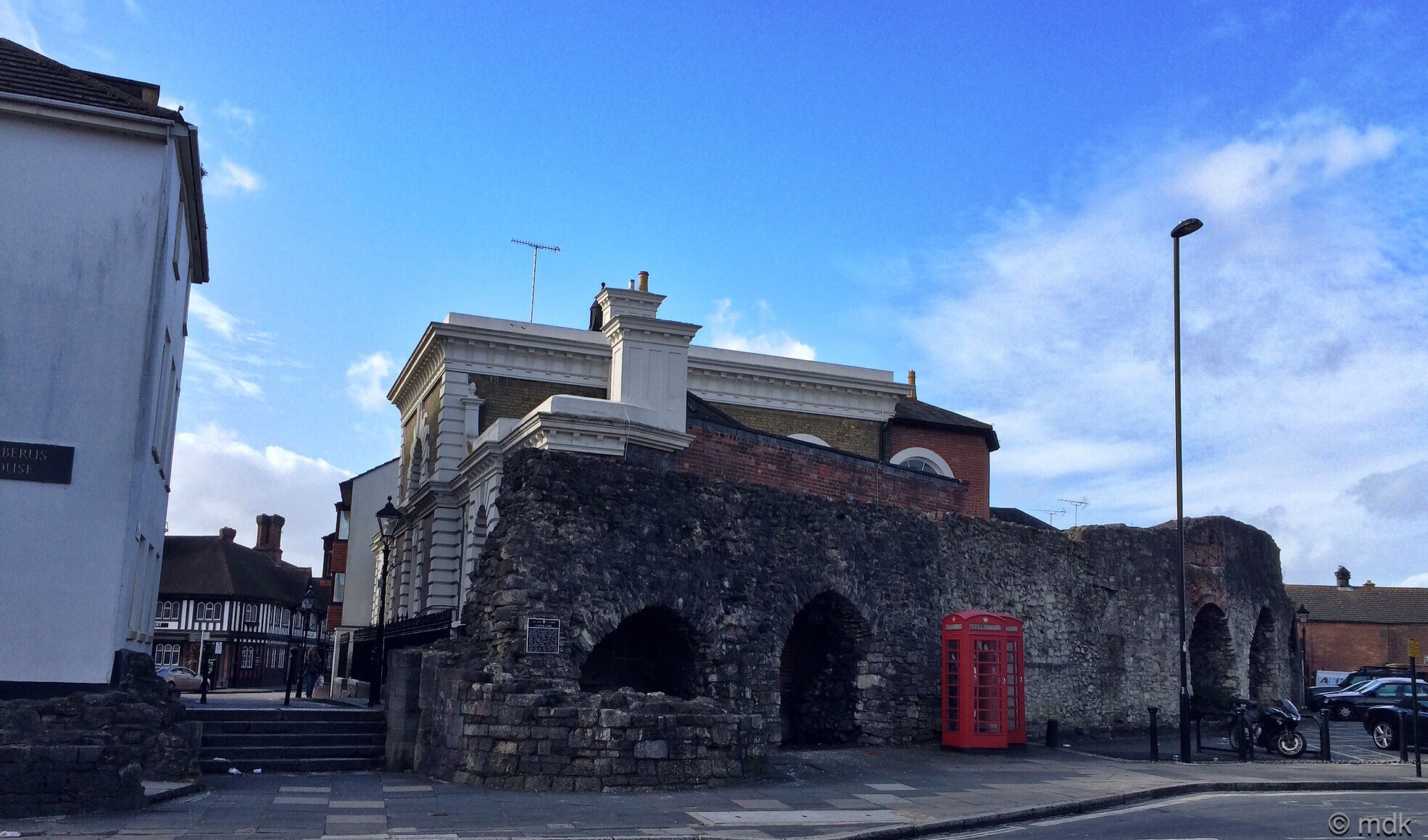 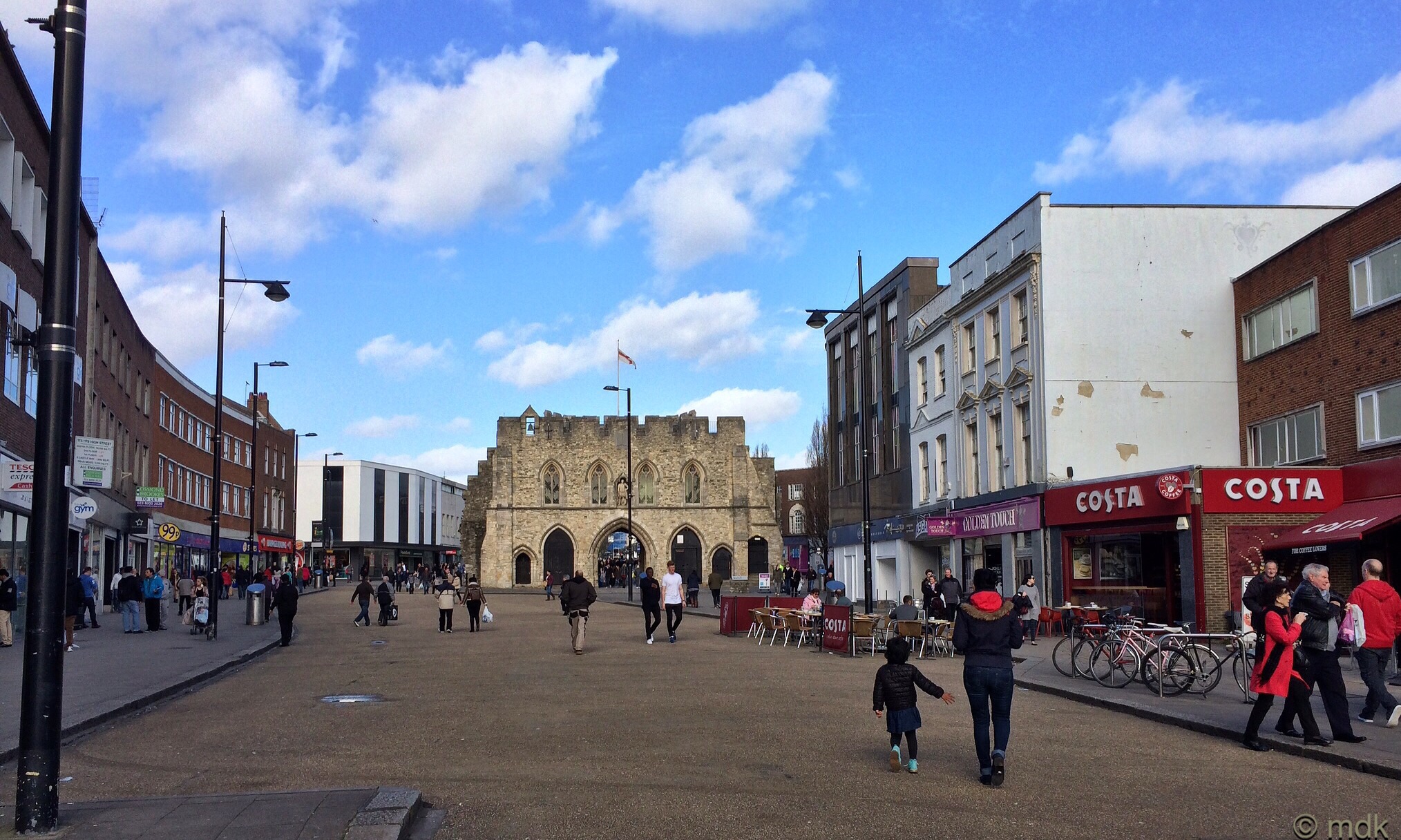 9 thoughts on “The rise and fall of Southampton castle”