It started with a bus. The bus was late due to the roadworks on the bridge. It crawled along but it got me there in the end. Then there was a train. The train was delayed due to signalling problems at Woking. It arrived at the wrong platform, necessitating a mad dash up the stairs and down the stairs but I got there in the end. Good job I’m intimately acquainted with Southampton Central station so I knew where to go. I’m pretty sure a few people missed it. At least I’d had time to grab a coffee from the station cafe beforehand.

First thing in the morning I hadn’t been sure whether to go ahead with my plan to make up some of the missing miles for my 2015 challenge. Commando came into the bedroom with a bucket just as I was peeling my eyes open. That is never a good sign and, when questioned, he admitted her had D&V. Straight away I was mentally checking out the state of my own innards and finding them wanting. Then again it was almost certainly psychosomatic. Almost certainly…. The weather forecast wasn’t the best either, a 50% chance of rain. When I looked again half an hour later it had changed to 30% and I was pretty sure my stomach was ok for the time being so I figured I’d give it a try. What was the worst that could happen?

The train moved so slowly I got the impression it would have been quicker walking. Outside I could see the places I wanted to be walking through bathed in sunshine. It was torture. I could also see rather a lot of standing water on the bits of the Itchen Navigation we passed, which made me wonder again if this was a good plan. By then though, it was too late, The train was finally pulling into Winchester station. Now the task at hand was not to get lost.

As you know, I have a tallent for getting lost at the best of times. In Winchester this is at least doubled for some reason and any small sense of direction I might possess completely deserts me. I swear they move things around when I’m not there. Before I left home I’d checked and double checked my maps, part of the route was familiar to me amd the rest seemed fairly simple, more or less a straight line from the station. The problem was I wasn’t entirely certain which straight line. Going mostly on gut feeling I set off.

It wasn’t long before I began to doubt myself. In my head The Weirs, where I knew I would get my bearings, wasn’t all that far from the train station but it felt as if I’d been walking forever and I hadn’t even seen any water, let alone any I recognised. There were plenty of interetsing old buildings to entertain me but in Winchester historic buildings are ten a penny so I tried to keep photo taking to a minimum or I’d never have got anywhere. One old pub, The Willow Tree, was irresistible though, red brick painted greyish cream at the front, perfect proportions and pretty window boxes and hanging baskets. If I’d had time I’d have gone inside. When I did finally reach some water I wasn’t sure it was the right water. At least it wasn’t the water I knew but I was hoping it was the Itchen, just further upstream from The Weirs. There were swans, which is always a good sign. If I was right, this was the place they filled the riverbank with sandbags last February to stop the houses flooding. With fingers firmly crossed I kept on walking, hoping I wasn’t getting further and further off track all the time.

When I finally saw the Bishop on the Bridge pub I let out a huge sigh of relief. Now I knew where I was. The pub was built in 1891 and stands more or less where the East Gate of the city was before it was demolished in 1768. The pub stands beside City Bridge and is named for St Swithun, the Saxon Bishop of Winchester who built the first bridge over the Itchen. City Bridge is not the original bridge but, built in the eighteenth century, is very close to the place the bridge would have been. Looking up towards the High Street I could see the famous statue of King Alfred and, as I crossed the bridge I passed Winchester City Mill.

The mill is another of those places I’d like to visit when I have more time. As history goes this really is ancient, it was first mentioned in the Doomsday Book of 1086 as a corn mill. In 1744 it was rebuilt and continued to be in commercial use until the ealy twentieth century, after which it was used as a laundry. In 1928 it was put up for sale and was even under threat of demolition until a group of benefactors bought it and gave it to the National Trust. Until recently it was used as a youth hostel but, after restoration, the waterwheel began turning again and there are now daily flour milling demonstrations. Although I didn’t have time to visit I did stop for a while to watch the tumultuous crashing of water and take in the beauty of the old building. The river takes a winding path from the bridge, lined on one side by the medieval houses of Chesil Street whose flint and brick foundations and walls seem to grow out of the water. On the other side of the path the remains of the city walls form a border. Behind a small wrought iron gate is the sole surviving secton of the original third century Roman walls, a small pile of stones to the untrained eye. The old houses and gardens fascinate me, especially the gates leading to nothing but water. This beautifully serene walk in the spring sunshine made all the earlier hustle and bustle worthwhile. In ancient times the Itchen flowed in two channels here following the foundations of the Roman town. In 70 AD this new artificial channel was created to stop the town from flooding and form a defensive moat. At The Weirs, the river divides, with one branch splitting off to the west through a sluice in a pretty garden. The other branch is the very beginning of the Itchen Navigation and runs under Wharf Mill. The mill, also called Seagrams Mill was built in 1205 although the present building only dates from 1885 and has been converted into luxury flats. Once this was the main grain mill in the city and the water of the Navigation flows beneath it. For a moment I stood on the bridge with the mill towering behind me and looked back at the river reluctant to leave this lovely place. 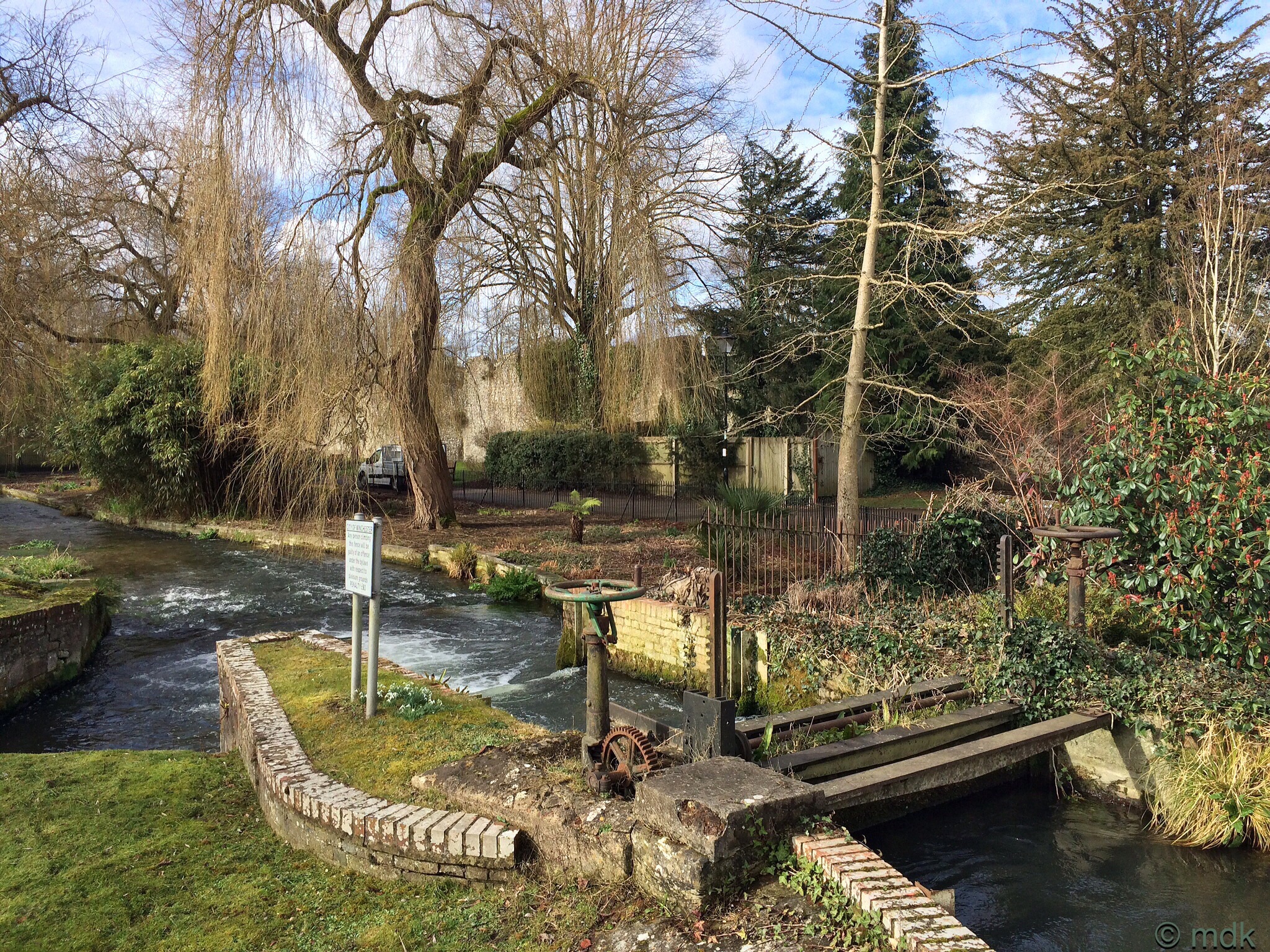 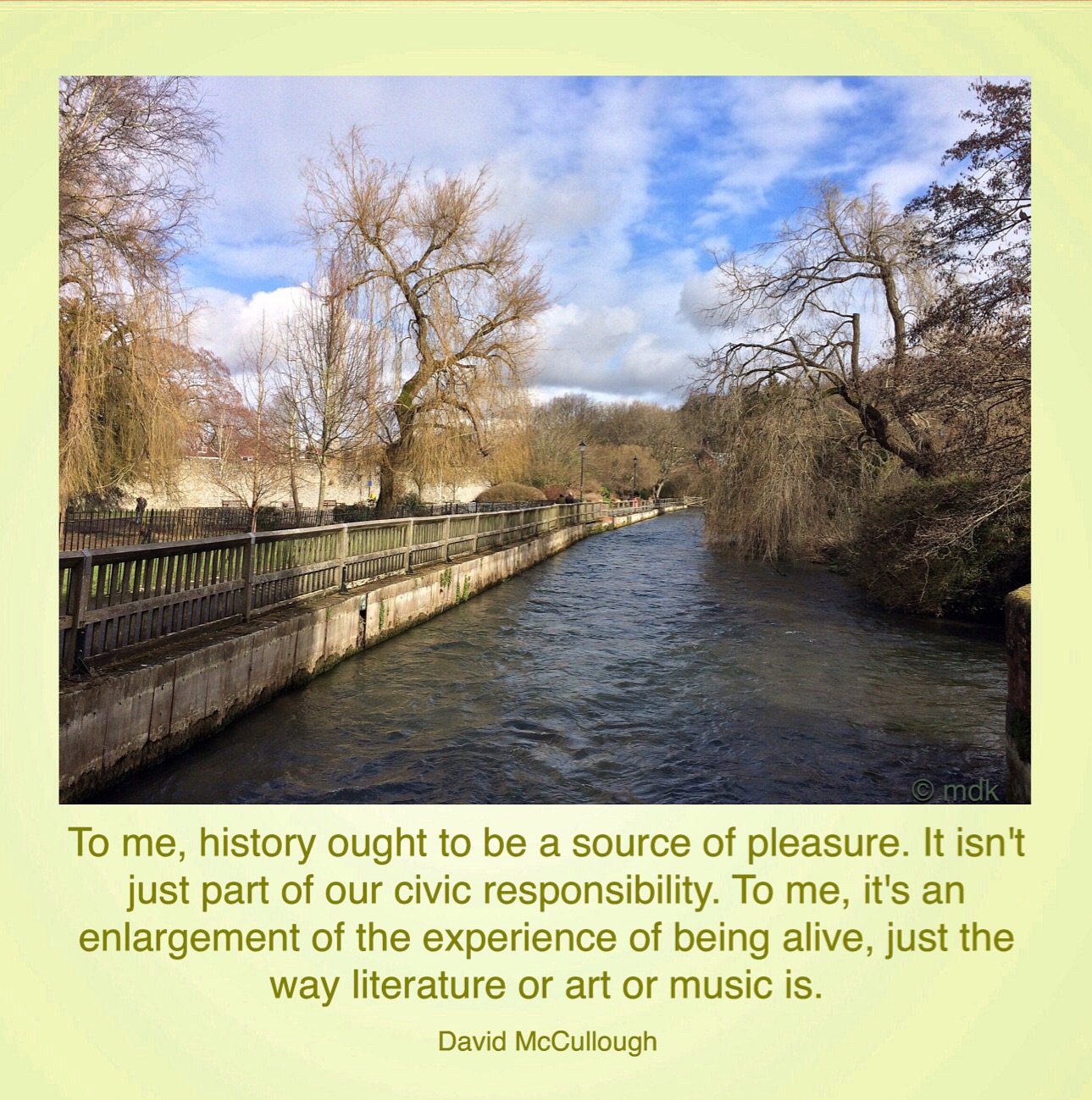 The Itchen Navigation is very dear to my heart but, on Tuesday, it wasn’t a path I’d be following. From my train journey I knew much of it was flooded and, although I’d be walking alongside it for a while, I had other plans. Eventually I set off again, walking around the mill to College Walk. Here Blackbridge and Blackbridge Wharf mark the official head of the Navigation and, as the Itchen meanders off to the west splitting into separate streams and islands, the Navigation takes a more definite path to the east. I followed at a distance along Domum Road while the Navigation path hugged the opposite bank hidden by houses. When I came to the Winchester College tennis courts I took the overgrown footpath that would lead me to the high road above the college grounds. The students use the Navigation for rowing practice but, on the high path, it was hidden by trees until  just beofre I reached Garnier Road and Tunbridge, the next Navigation bridge. There are steps here leading down to the playing fields and, through the gaps in the trees I could just make out the triangular Naviagtion marker. Part of me wanted to be down there amongst the mud and puddles slipping and sliding my way in the steps of the barge men.

Across the road I stuck to my chosen route, passing the steep muddy trail up St Catherine’s Hill another path I would not be taking for obvious reasons. Under the bridge I set off on what was once the main road to Wincehster high above the narrow trail of the navigation. These days it’s a trail for cyclists and walkers. With no leaves in the trees I got the occasional glimpse down at the crumbling Navigation trail, breached in many places by the floods of winter and spring 2014. To the east St Catherine’s Hill towered over me. If I’d braved the mud and the climb I knew there were some amazing views to be had but there were catkins on the trail to make me smile. This is a path I haven’t taken for a long time but once, when I was training for both of my Moonwalks, it was a familiar route. On Tuesday it seemed longer than I remembered but the reward was another look at the stone barge designed by Abigail Downer to double as a seat and placed on the path in 2011. The barge, funded by Hampshire and Isle of Wight Wildlife Trust, is the same shape as the Navigatiins barges and has the names of some of the barge men along with the names of Domum and Northam Quays, the beginning and end of the canal. On the south side of the hill sheep were grazing and I soon passed the modern sluice at St Catherine’s Lock and the railway bench which reminded me I really must walk the viaduct one of these days. As I walked under the old railway arch I knew the Winchester stretch of my walk was coming to an end. From there it was a short way to the infamous Hockley Road traffic lights. Soon I would be in Twyford revisiting an old friend. 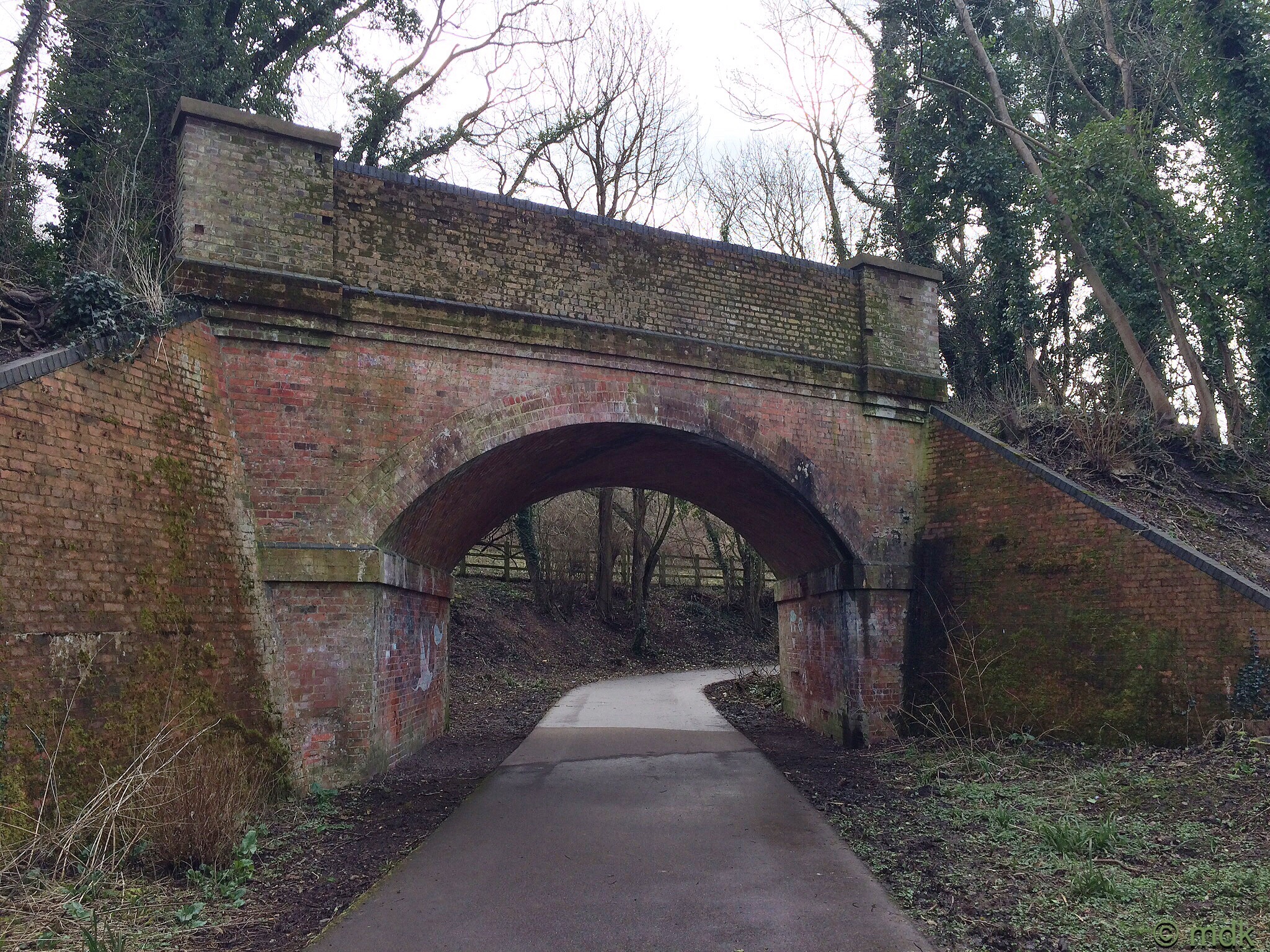 15 thoughts on “Winchester, an exercise in not getting lost”