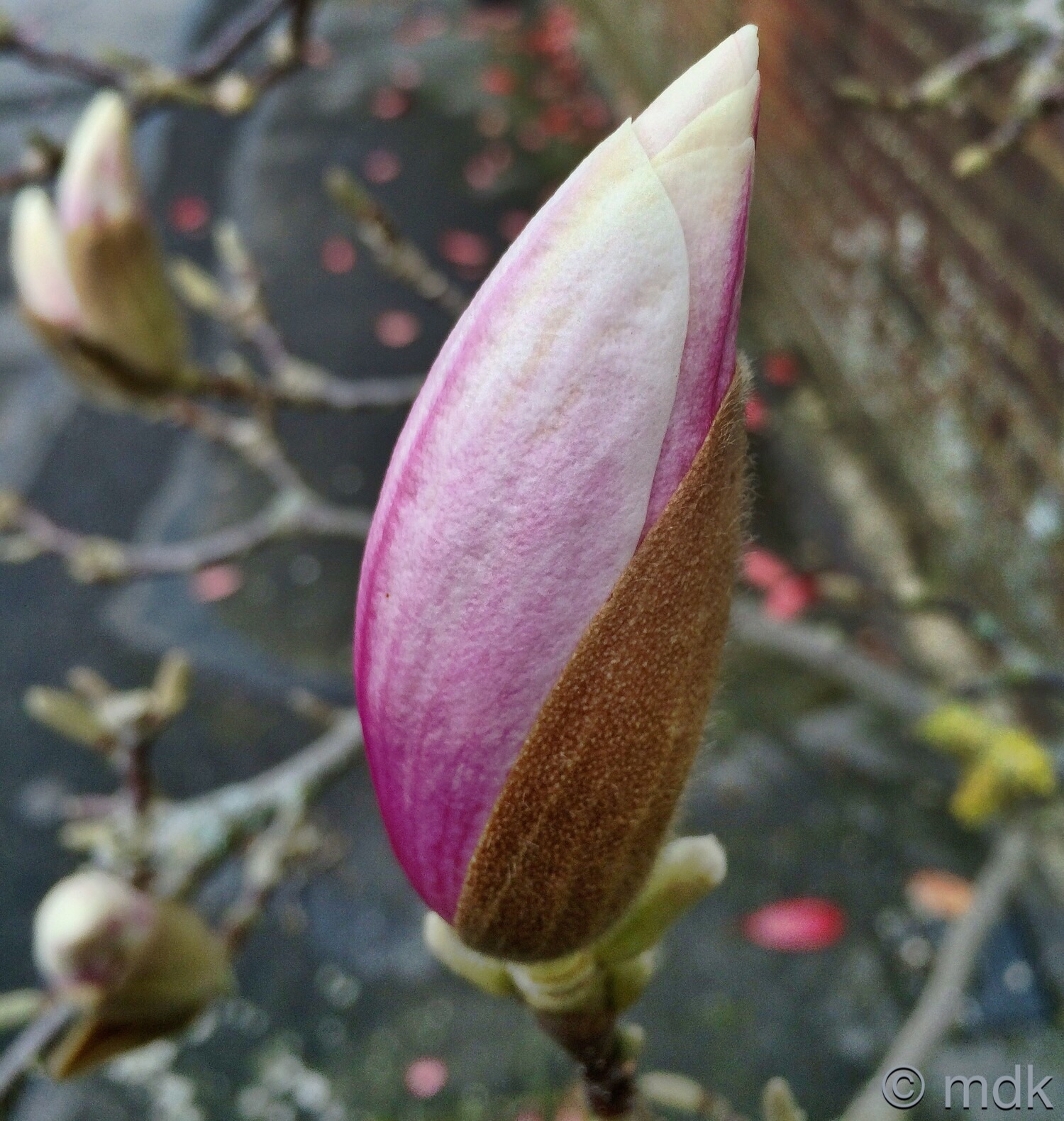 A little while ago I visited Cross House, the ancient shelter for people waiting for the Itchen Ferry boats. Cross House was built on base of the old Itchen Ferry boundary cross and, close to the building, I found a strange rectangular stone. This, I discovered later, was one of twelve modern boundary stones, carved in the council workshops in 1988 and placed at significant points along the city boundary. It was not the first one I’d stumbled upon but it was the first time I’d been able to find out what I was looking at. As Tuesday was my last chance for a walk before I went back to work, I decided I’d revisit the first boundary stone. When I set out, the weather wasn’t the best, dull, cold and slightly misty, so I was glad the walk wouldn’t be too long. Despite the grim weather there were a few signs of spring in the gardens as I climbed the Little Hill. The first magnolia flowers are beginning to burst out of their furry sheaths and a large camelia at the top of the hill is a mass of white blooms, splashed with the tiniest hint of pink. They brightened my day even though the sun wasn’t doing much to help. 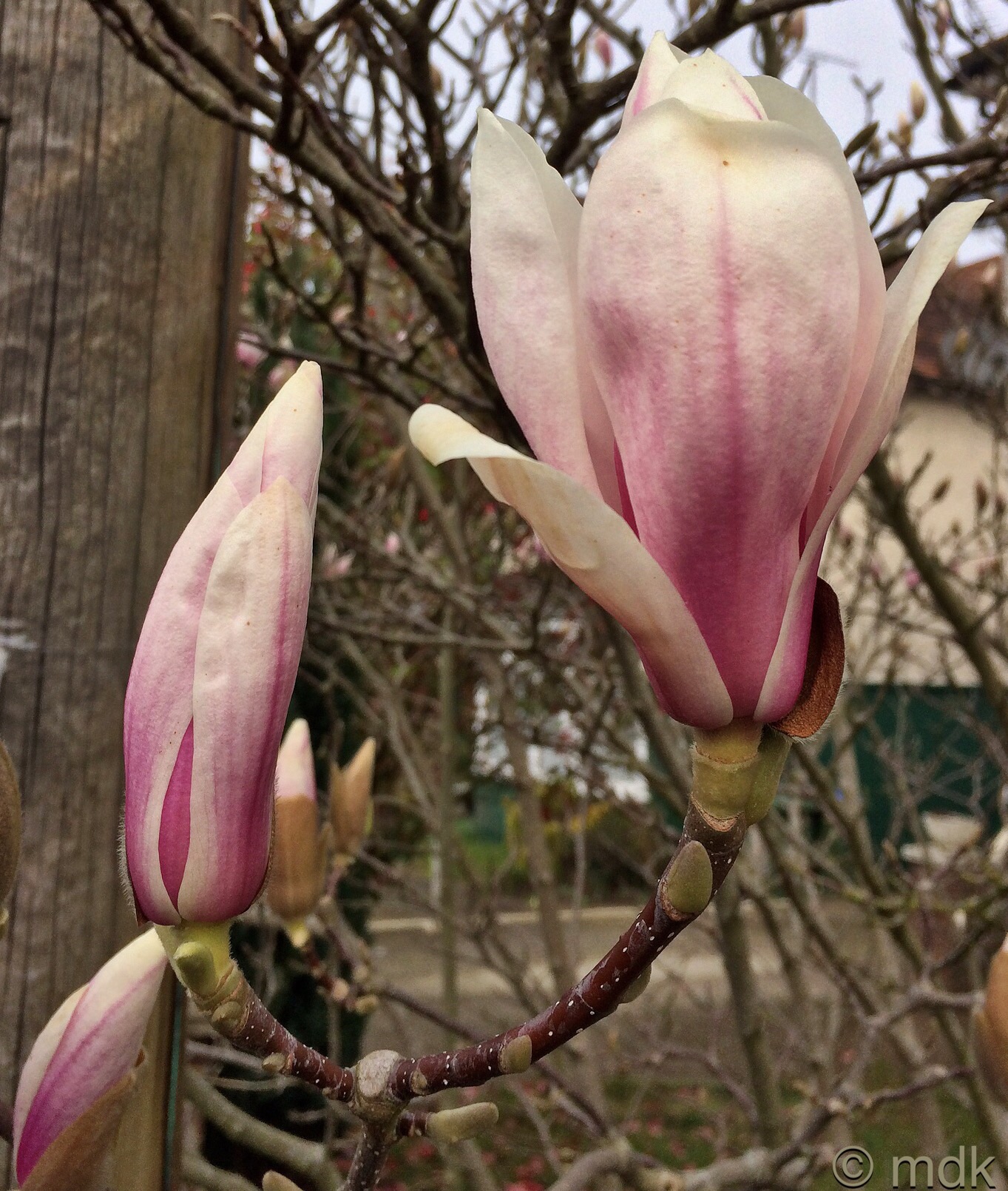 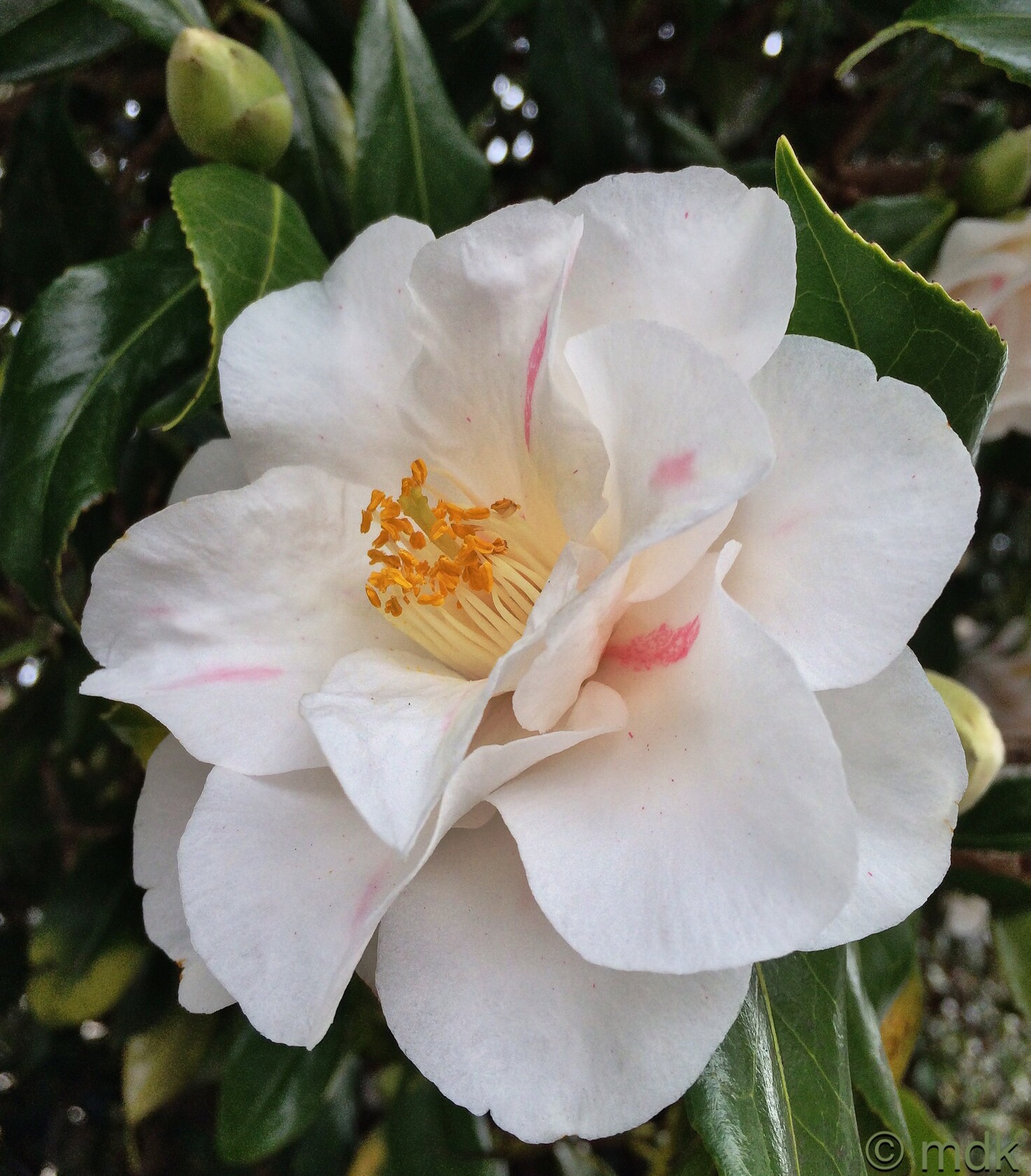 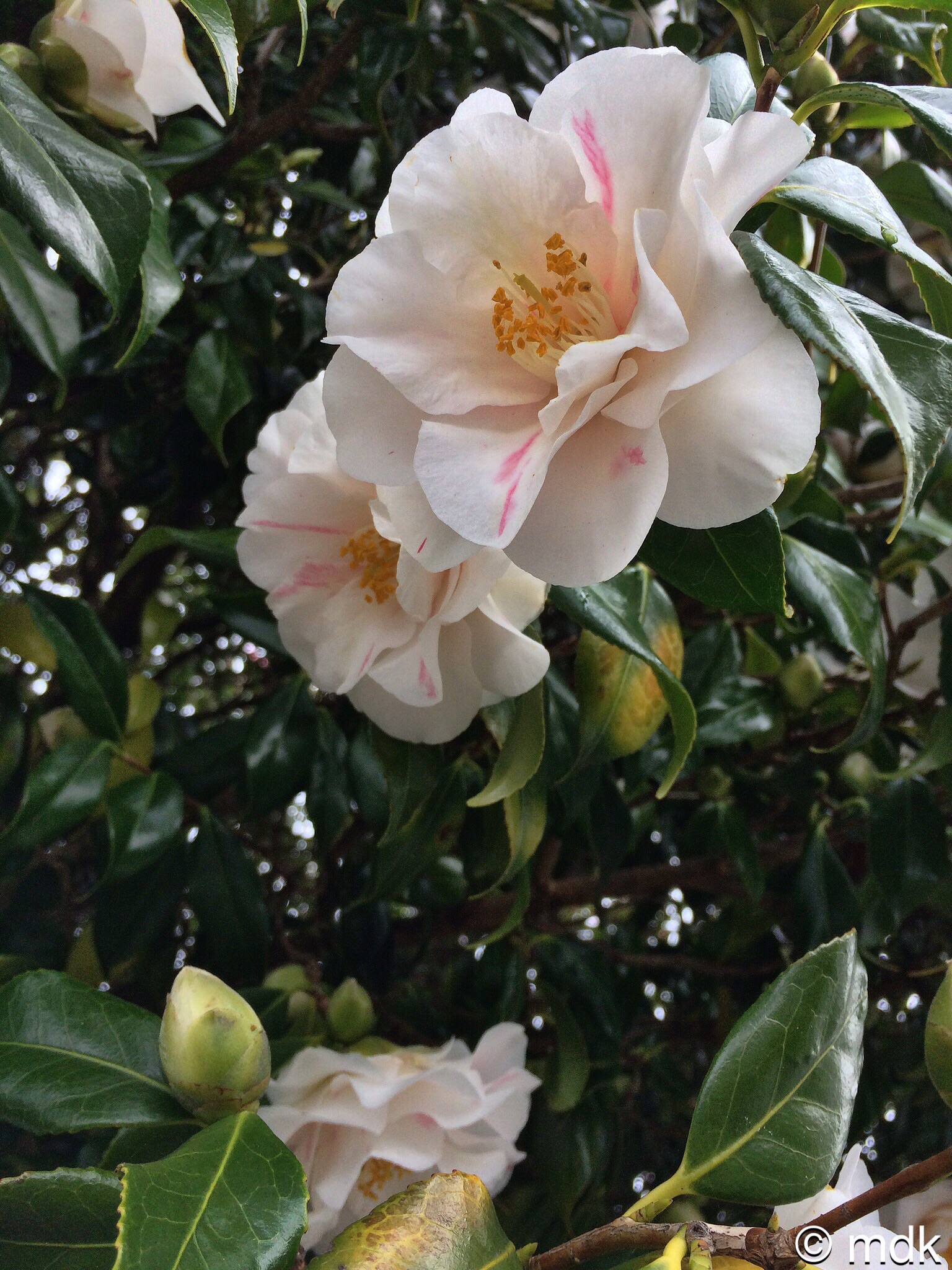 There wasn’t much to cheer me as I made my way across Freemantle Common where the tangle of bare, moss covered branches showed no signs of new life. Soon there will be a hint of spring green blurring the boundary between branch and sky but not just yet. Feeling a little tired after a busy week of walking and spurred on by the gloomy weather I had chosen the most direct route to the shore. By the time I reached Peartree Green things did look like they might be going to brighten up but I was still glad of my thick coat, hat, scarf and gloves and I hurried on trying to keep the blood flowing. 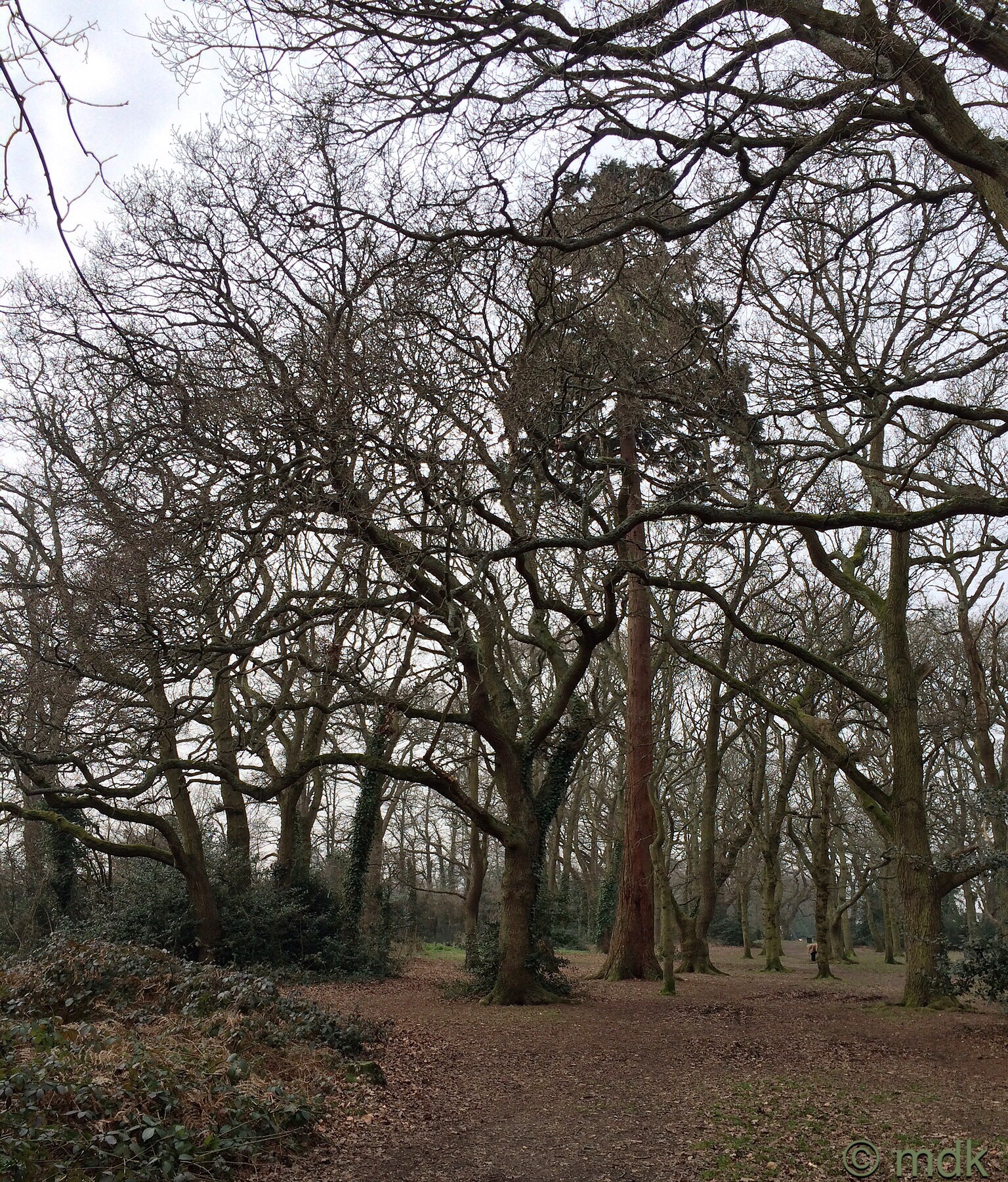 By the time I reached the shore the sun was trying much harder and, although there was still a slight mist over the water, it felt much warmer. There was a chocolate milk in my bag calling my name and I’d hoped to sit in one of the beach shelters to drink it and eat my granola bar. It wasn’t to be though as all the shelters and benches were occupied so I walked on. By the time I reached the end of the promenade I was regretting the warm clothes and feeling decidedly overheated and exhausted so I was delighted to see empty benches. Quite why I was so tired after walking less than four miles was a puzzle but I sank onto the bench gratefully, took off my hat and gloves and set to with the chocolate milk and granola bar.

There were touches of blue in the sky, although the distant view was still hazy with mist. As I sipped gratefully at the milk five geese circled lethargically and, equally lethargically, I picked up my phone and took a photo. My food and drink was finished, the rubbish in the bin, so it was time to get moving again. I’d expected the drink and snack to give me some much needed energy but they didn’t. With legs feeling decidedly tired and lead like, I set off again towards East Lodge.

By now I knew I was close to the boundary stone but it was probably a year since I stumbled upon it and I couldn’t remember exactly where it was. I was pretty sure it was after the stream and the little bridge but, even so, I kept a close eye on the undergrowth as I walked. At the bridge I stopped for a moment, searching my woefully inadequate memory banks trying to remember where I’d seen the stone. Wherever it was I hoped it wasn’t too much further because my energy reserves were rapidly running out. 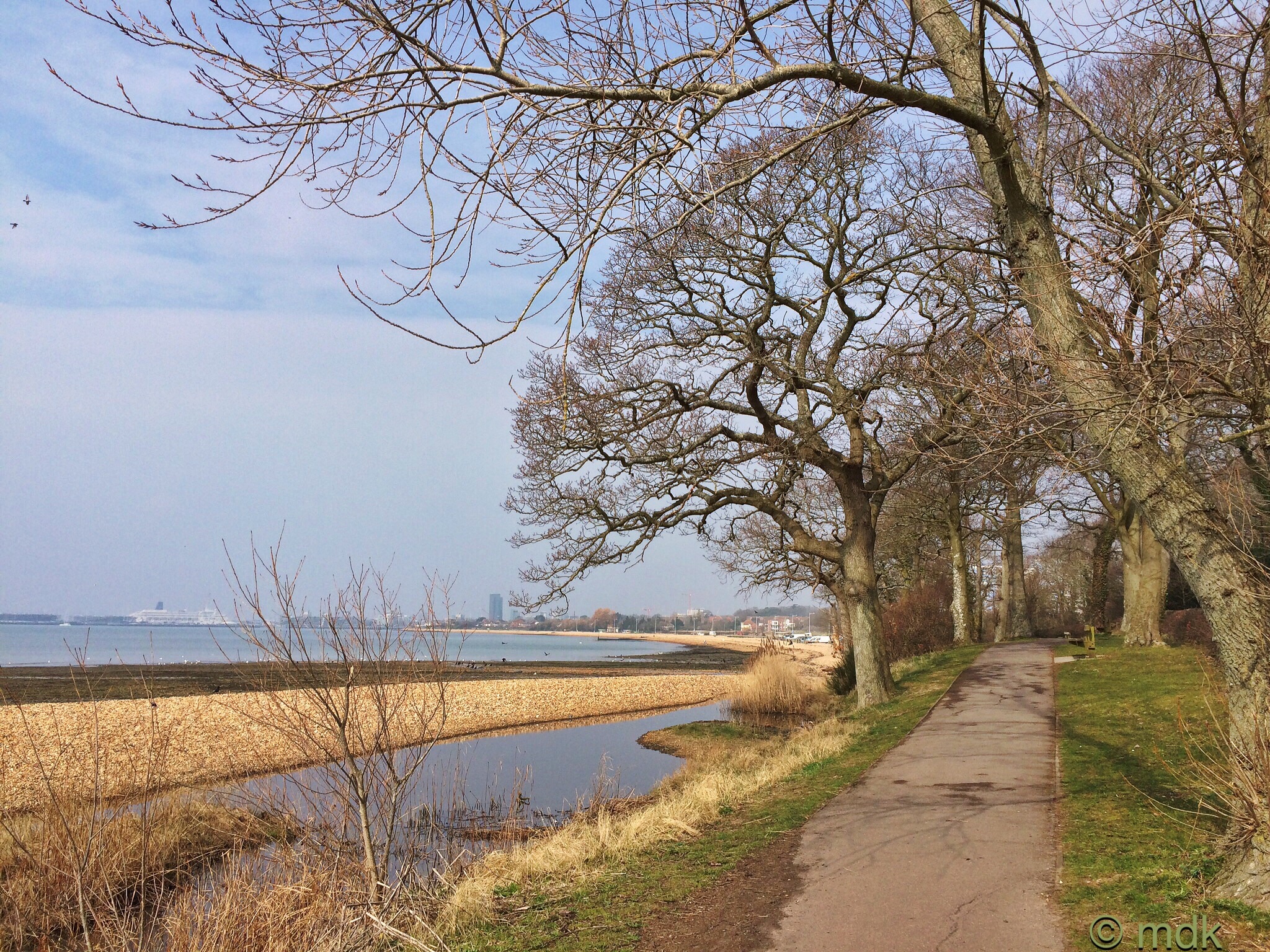 My memory had come up blank but, as soon as I turned the corner, there it was, far closer than I’d thought it’d be. Despite being far more hidden away and sheltered from the elements this stone is more weathered than the Cross House one and the covering of moss and algae made it easy to miss amongst the grass, weeds and rotting stumps. It was within spitting distance of East Lodge and I took a couple of photos to fix it relative to its surroundings. You never know, I might want to visit it again one day. 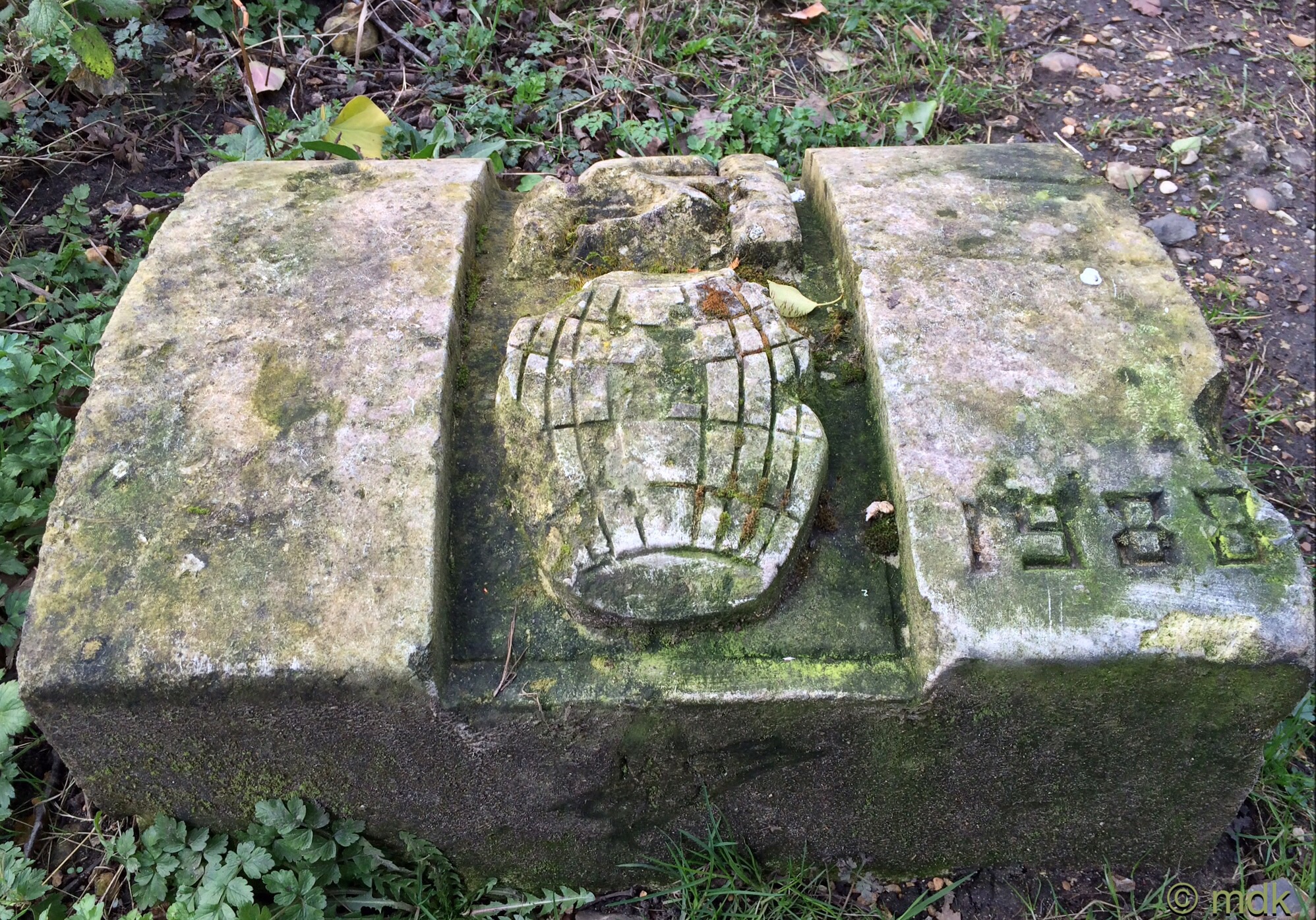 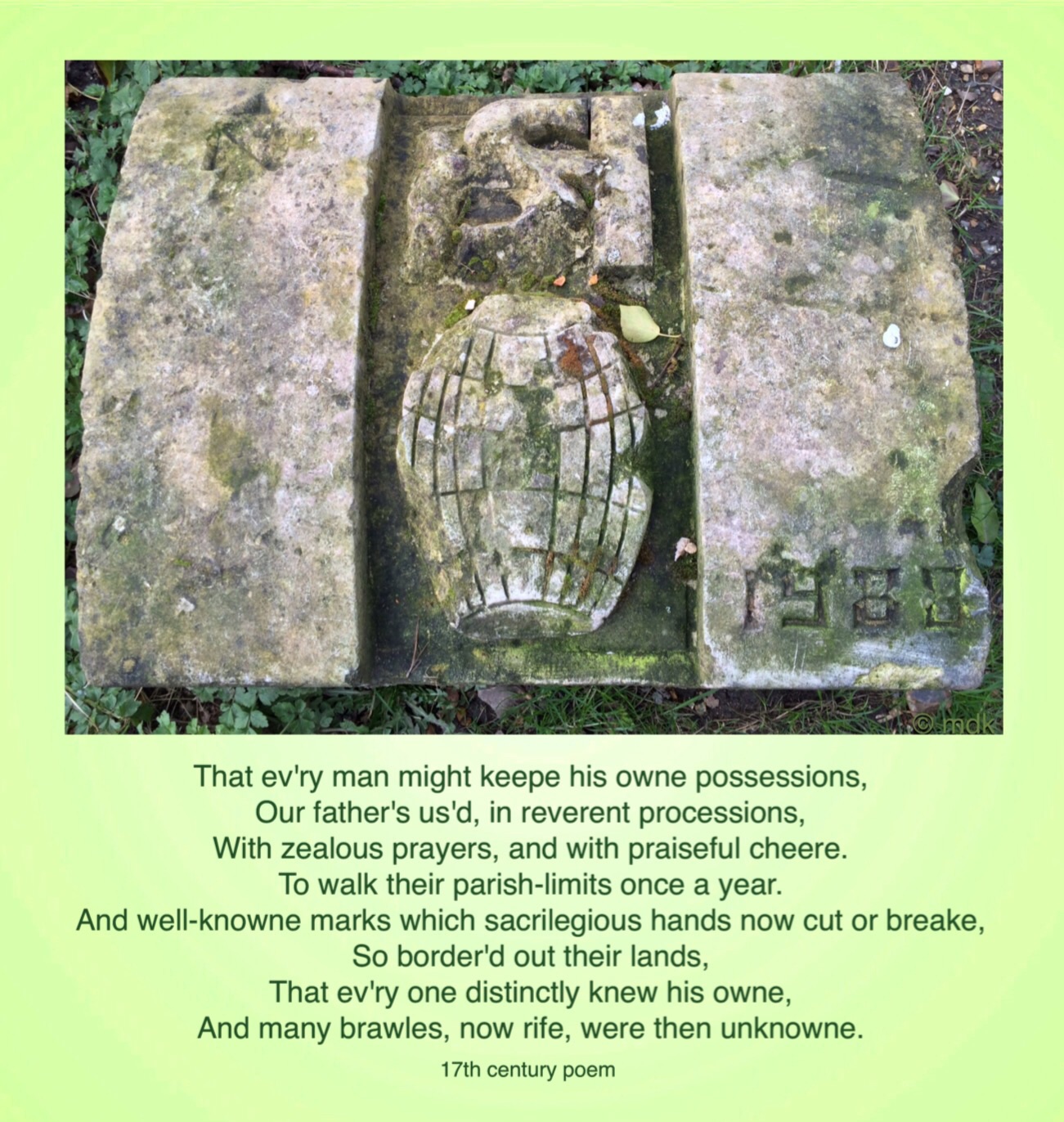 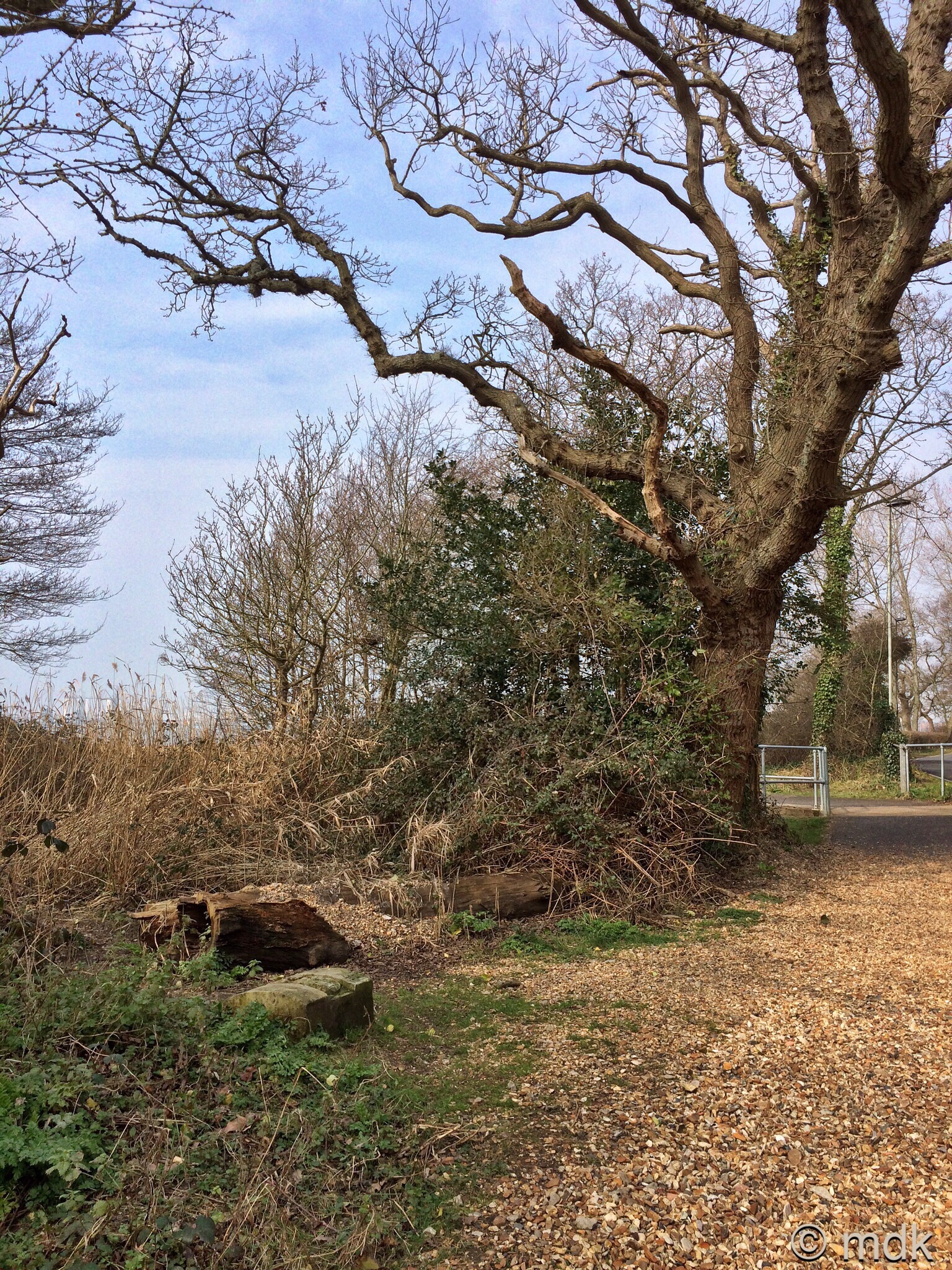 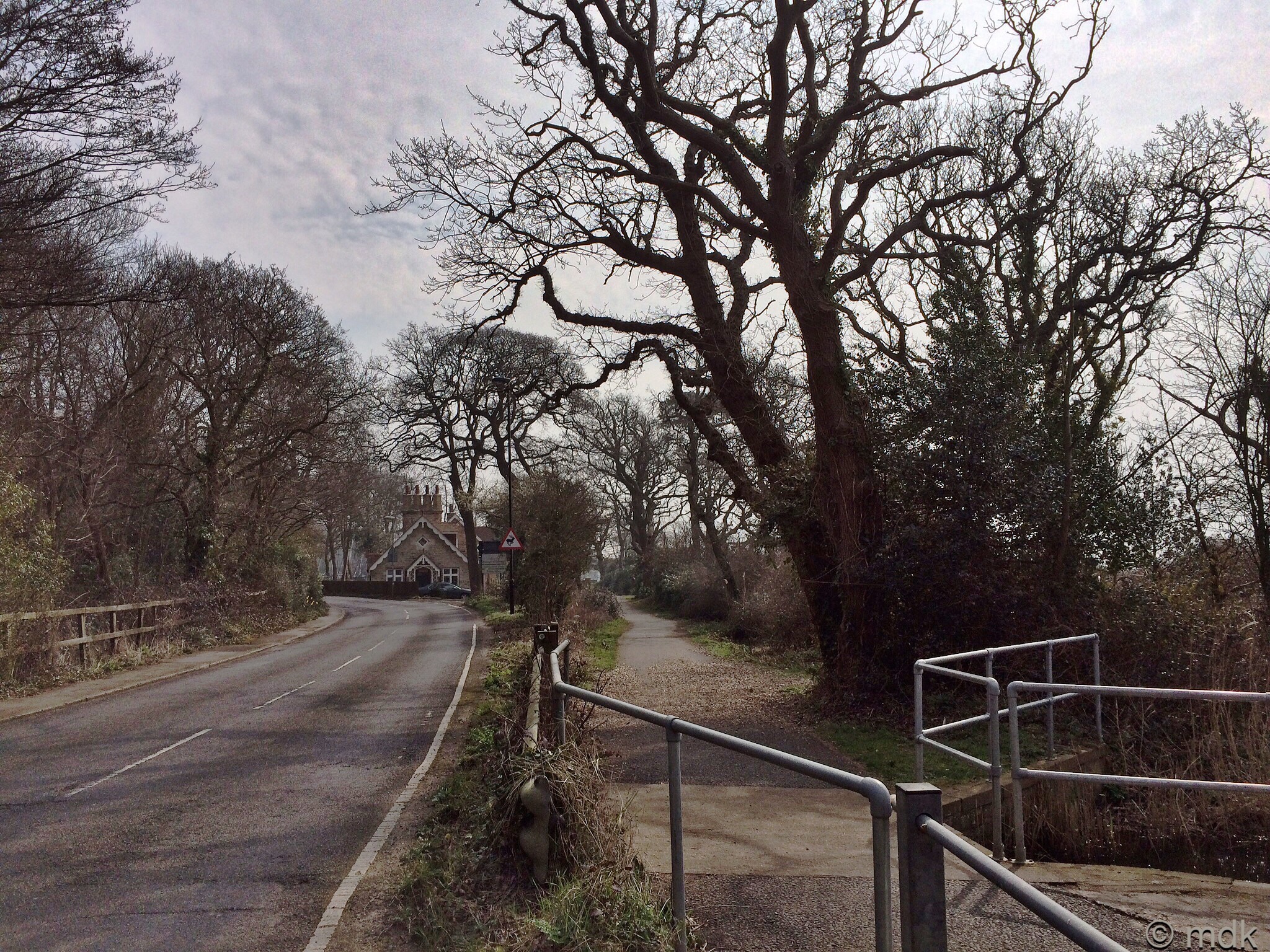 Information on the stones is hard to come by but, thanks to Southampton Heritage Photos on Facebook, I know a little more now than I did. The ancient annual ceremony of beating the bounds dates back at least eight hundred years. Originally, the mayor and sheriff, along with other dignitaries, circumnavigated the boundry of Southampton on horseback, beating back the undergrowth to check they were intact. These days the Mayor’s car is used. In the late 1980’s it was decided to extend the old boundary points to reflect the modern city boundary and the twelve new stones were made, hence the date of 1988. Unfortunately, the location of all these stones is not exactly clear, although there is a list of probable locations.

It may have been coincidence, but 1988 was the centenary of the formation of Hampshire County council. In ancient times the area had been called Southamptonshire, although, for centuries it had unofficially been known as Hampshire or Hantscire. From 1888 it officially became Hampshire with Southampton a borough within it. Coincidence or not, the H and S on the stones refer to Southampton within Hampshire, which is why the S is within the H. What the barrel, if that’s what it is, signifies, is anyones guess. So now I have found two of the twelve and I have an idea where some of the others are. This may be a quest that takes some time.

Despite feeling unaccountably tired there was one more thing I really had to do before I turned for home. Across the road from the bridge is one of the entrances to West Wood. Some time ago I did have a very brief dalliance with exploring these woods but it ended in me being hopelessly lost. Can you believe it, me lost in the woods? Ever since I’ve been meaning to have another look at them and this seemed like the right time. 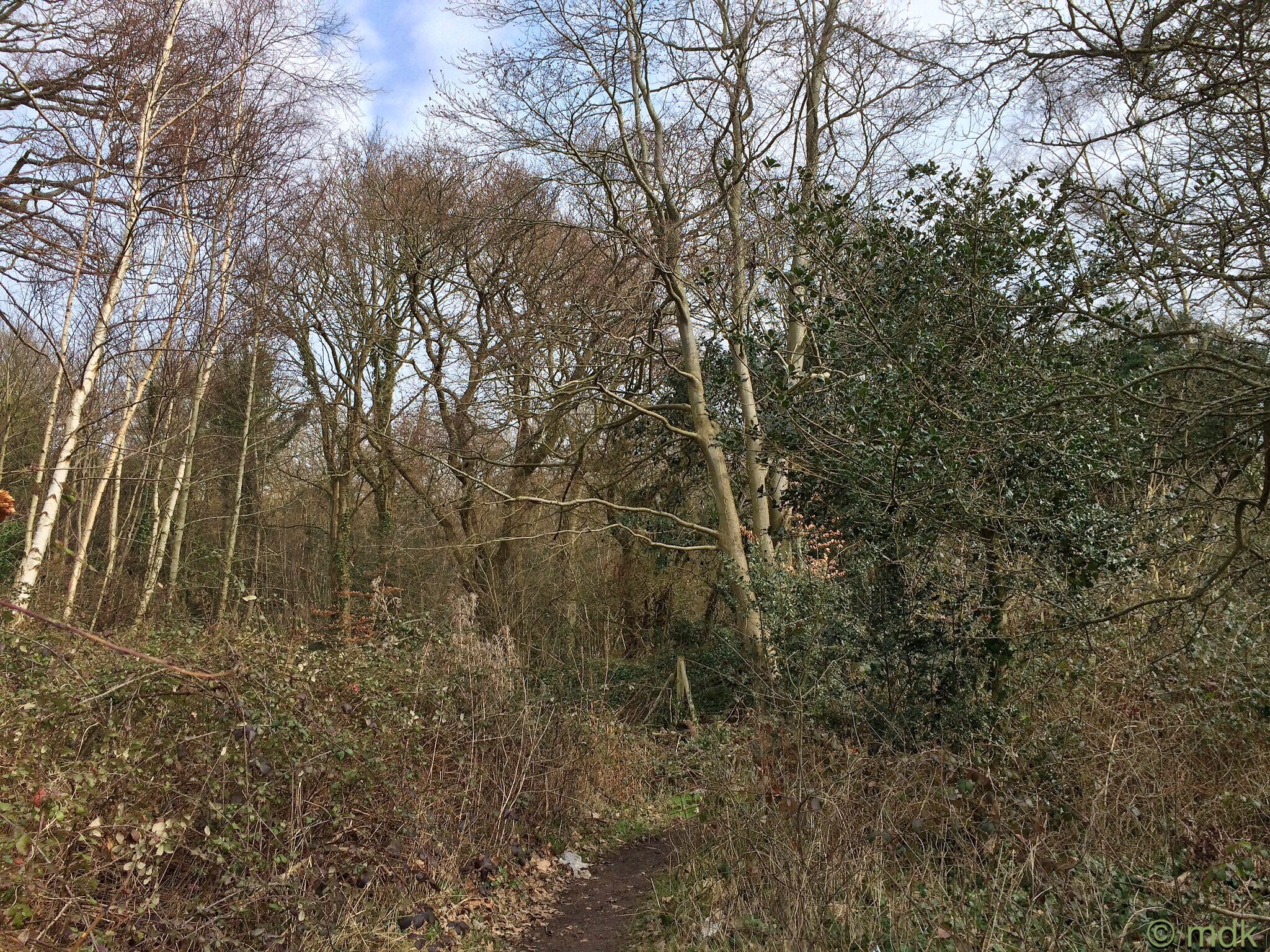 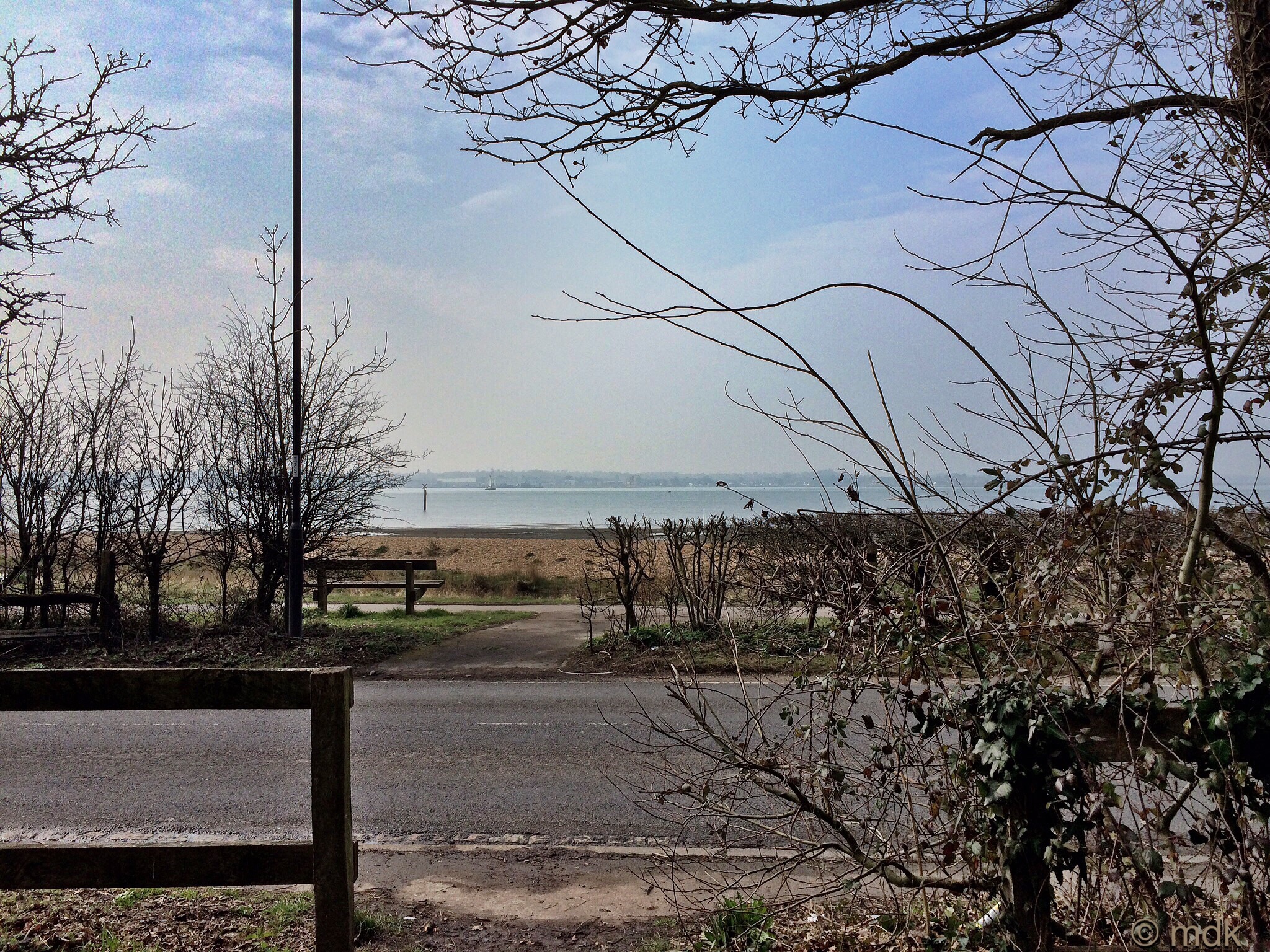 Almost at once I could see small ponds, the source of the stream that runs under the road to the shore. Occasionally, it floods and is more on top of the road than under it. It looked very green and calm amongst the trees and I spotted some steps leading to a small wooden bridge. My legs felt like lead but somehow I mustered the energy to go to them and climb down to look into the cool water. It was a place of beauty and tranquility with the water trickling and bubbling under the bridge from one pond into the other. 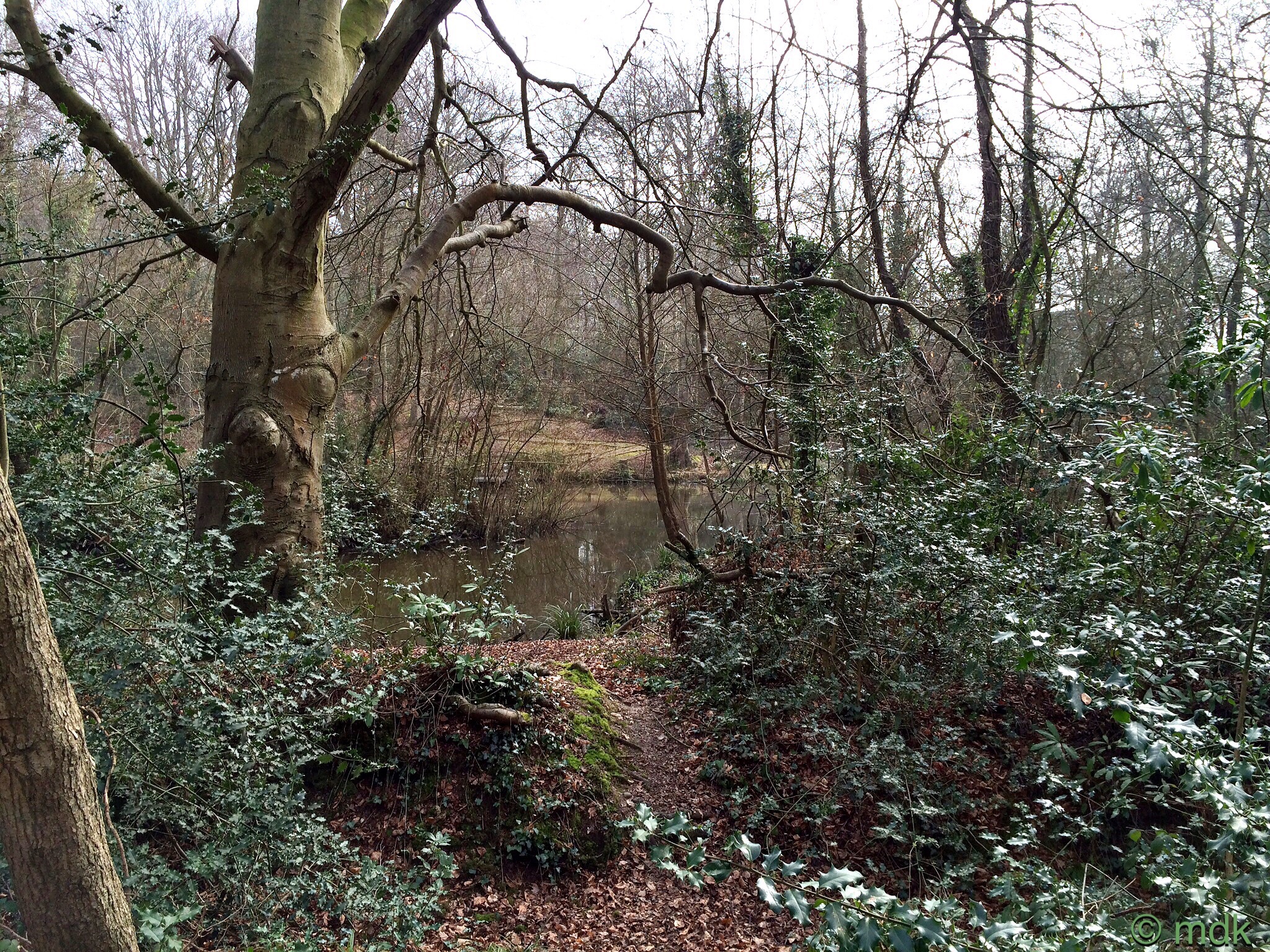 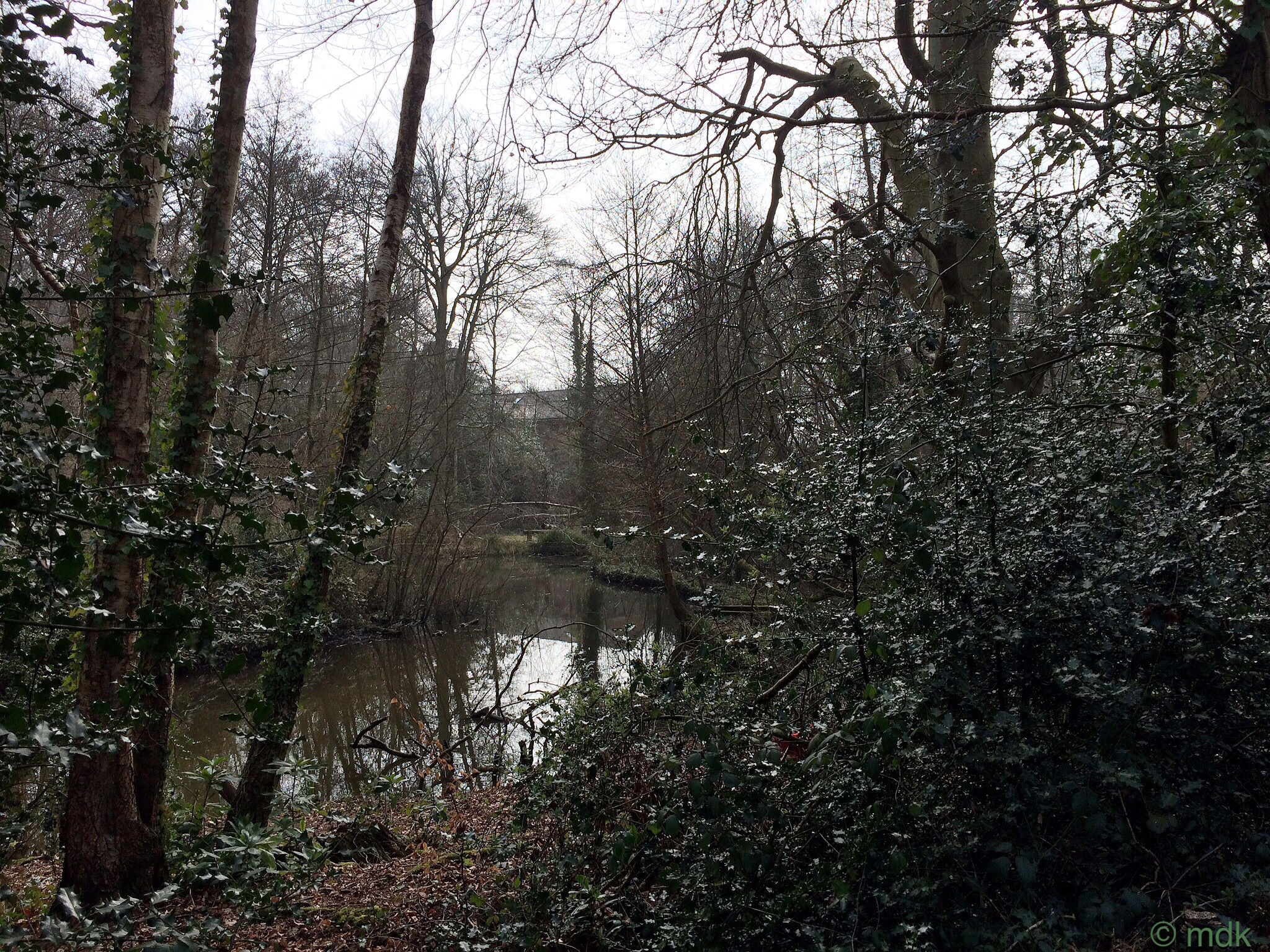 In Victorian times, there were houses on the southern edge of the wood, Marina View, Hilton House and Lake House, now all gone, replaced by the tall flats and council houses. The ponds were in the grounds of Lake House and the bamboo surrounding them was planted when this was a garden. 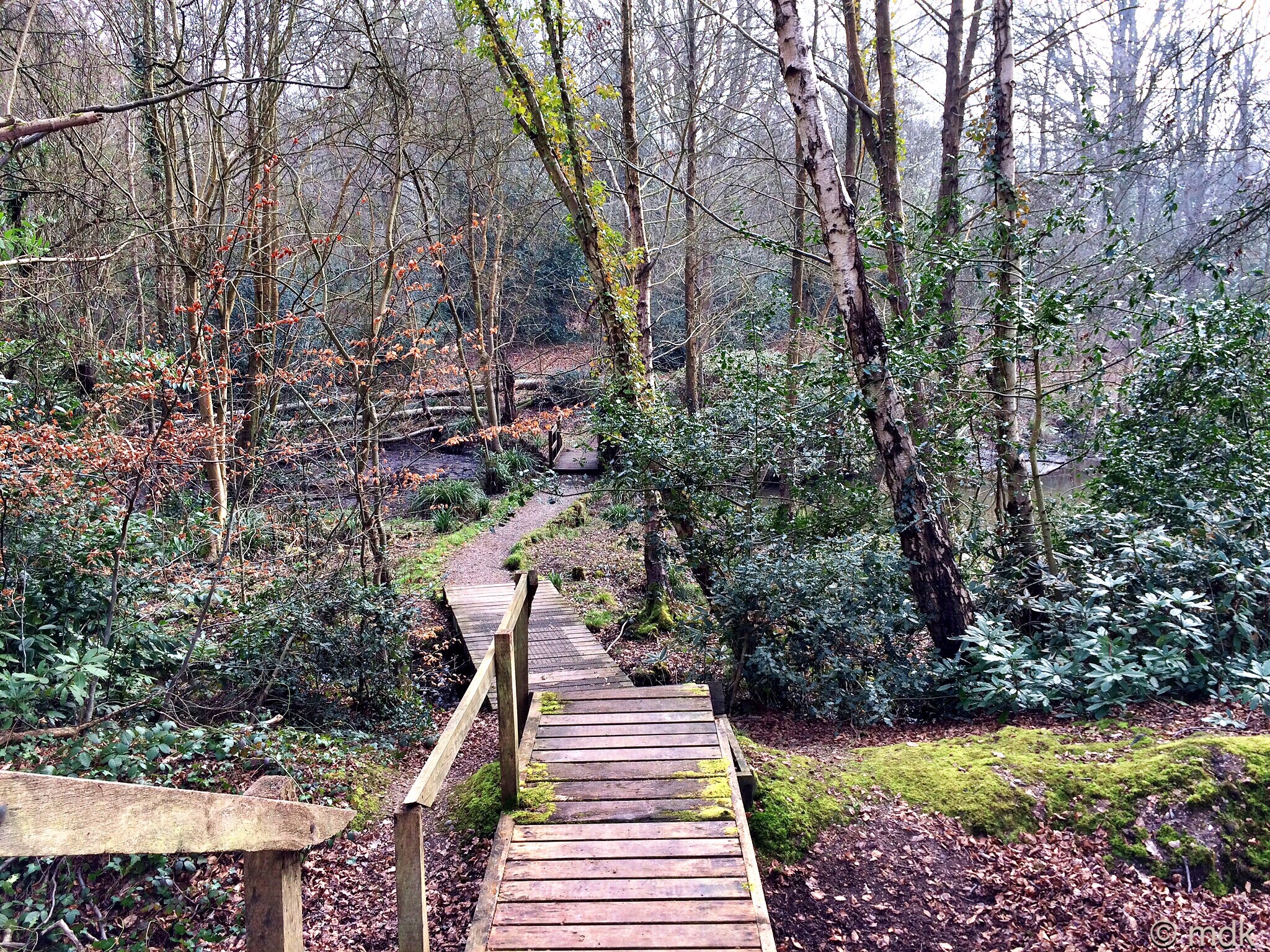 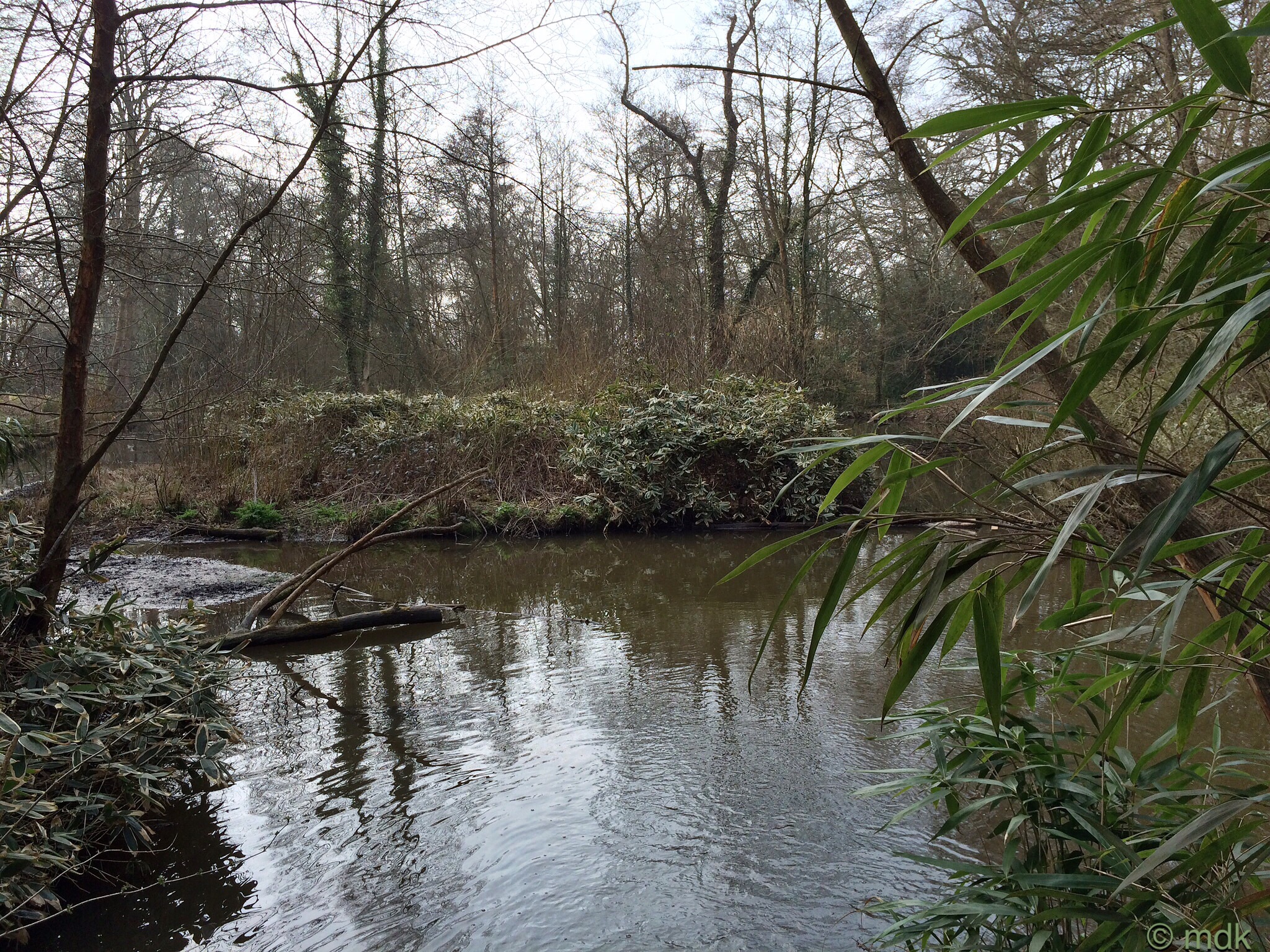 Climbing back up the steps was almost more than I could manage and there was a moment when I felt a stab of panic that I really might not make it and would be stuck, all alone in the woods. Why I was so fatigued is still a mystery and I can only blame being overheated, or maybe I didn’t sleep as well as I thought I did. Still, I did get up the steps and started to head towards the shore, or where I thought the shore was. 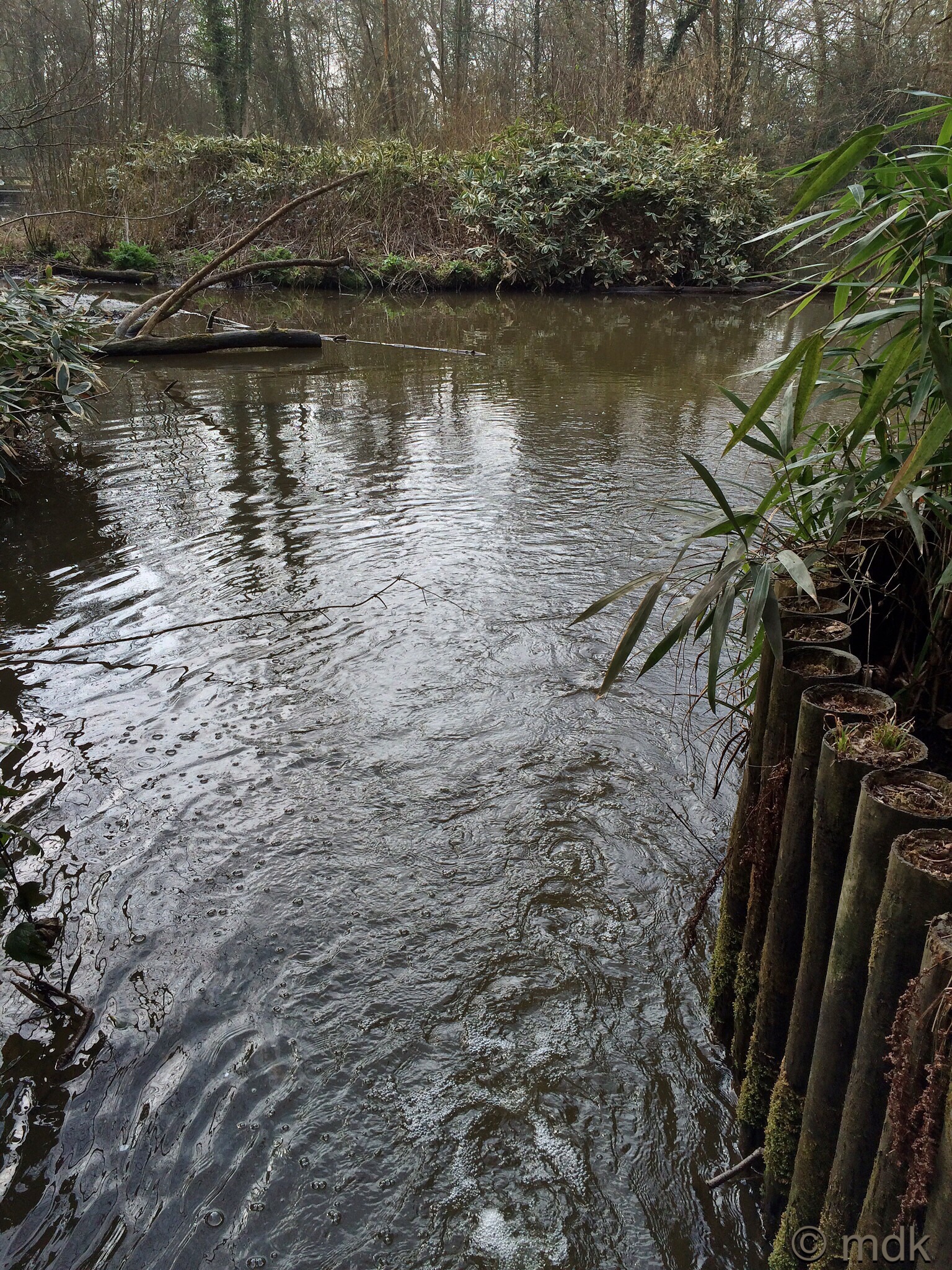 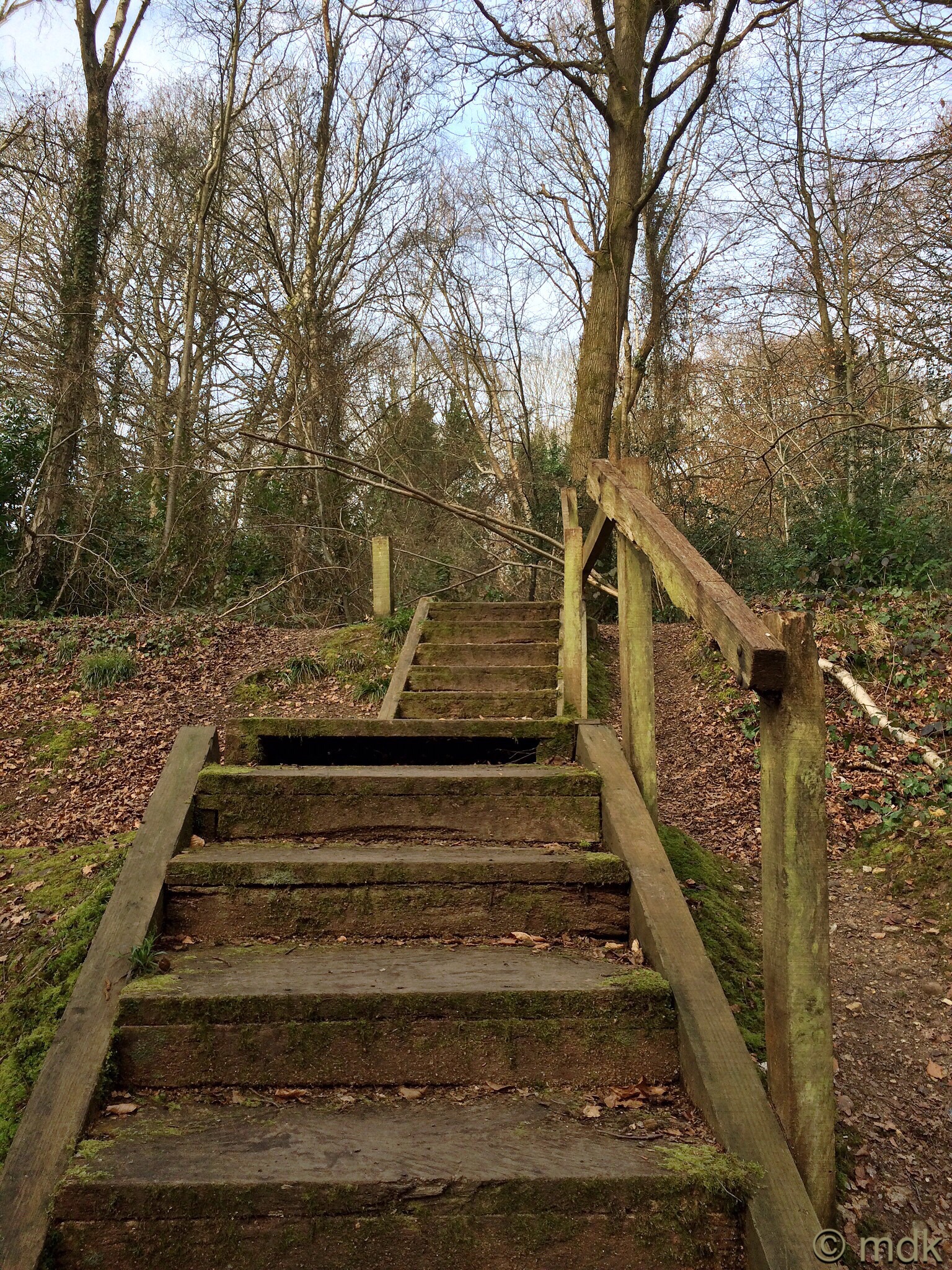 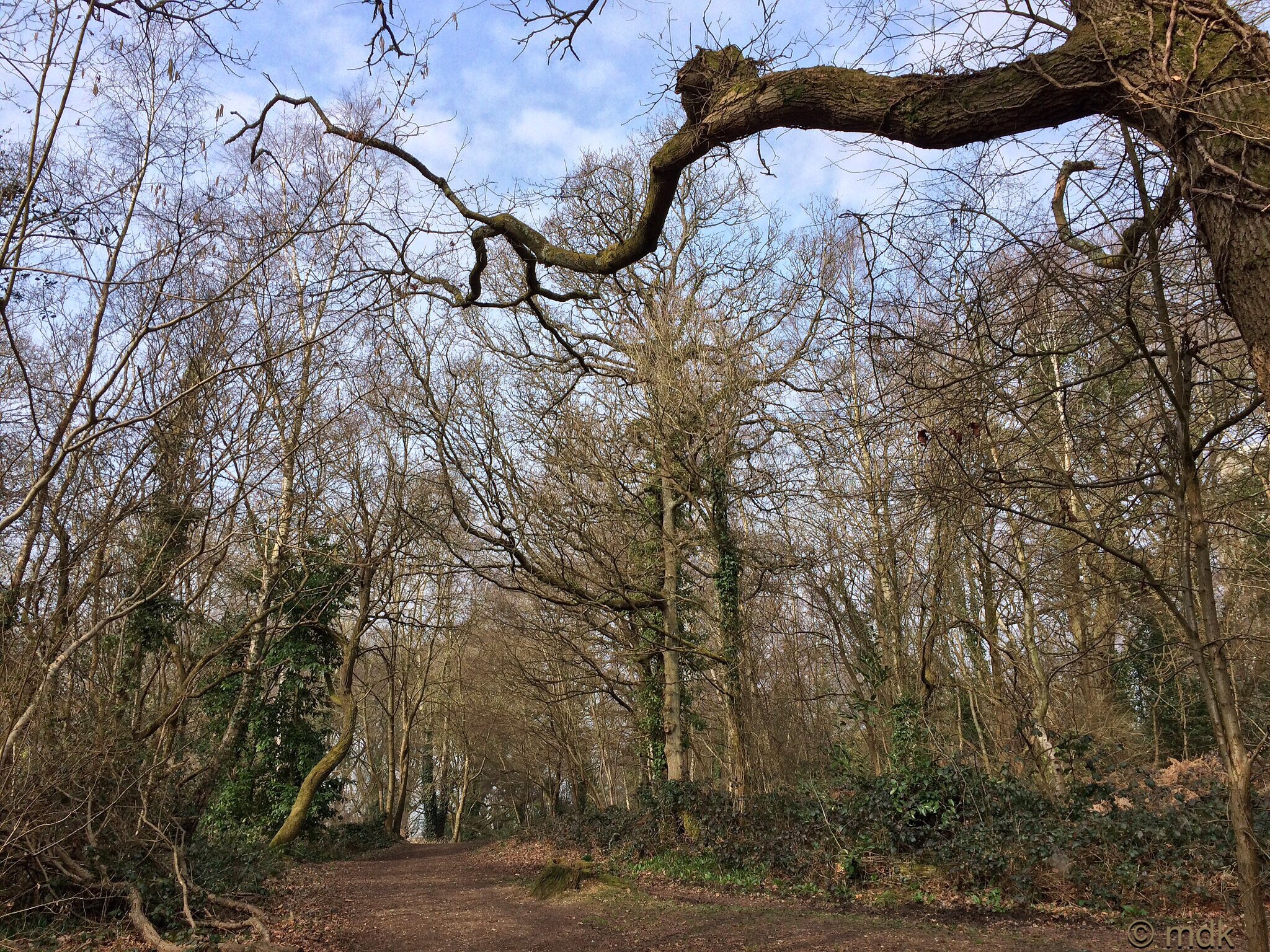 When I saw the remains of some kind of building in the distance I almost ignored it. On any other day I’d have been dashing at it and exploring all the little side trails I kept seeing. Mustering the last of my reserves I walked the hundred yards or so and took a cursory look at the brickwork. It was obviously the base of a building and I saw what looked to be steps, or what was left of them. Apparently this is the base of an artillery placement, Z-battery, built to defend the Spitfire factory during World War II. It was the perfect place to hide it from the enemy bombers and they probably never knew what hit them. This is somewhere I will have to revisit when I have more energy. 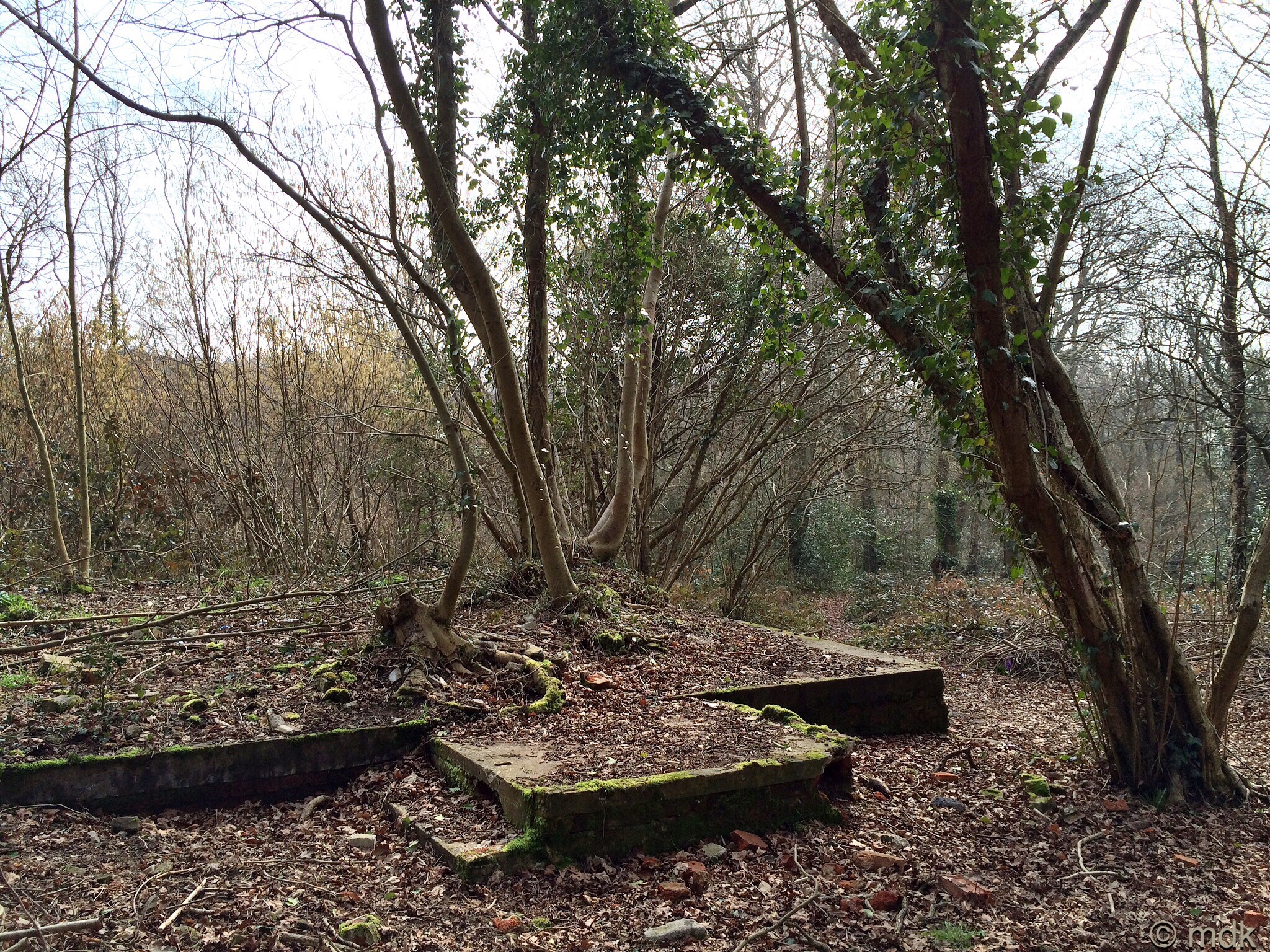 On Tuesday though, that energy and enthusiasm was in short supply so I trudged to the edge of the wood. Luckily my internal compass was working for a change and, quite quickly for someone walking so slowly, I came out by the big green gate in the shadow of the tall flats. Now all that remained was the long trudge home along the shore. The fact that I was overtaken near the sailing club by a very elderly lady, shows just how tired I was. 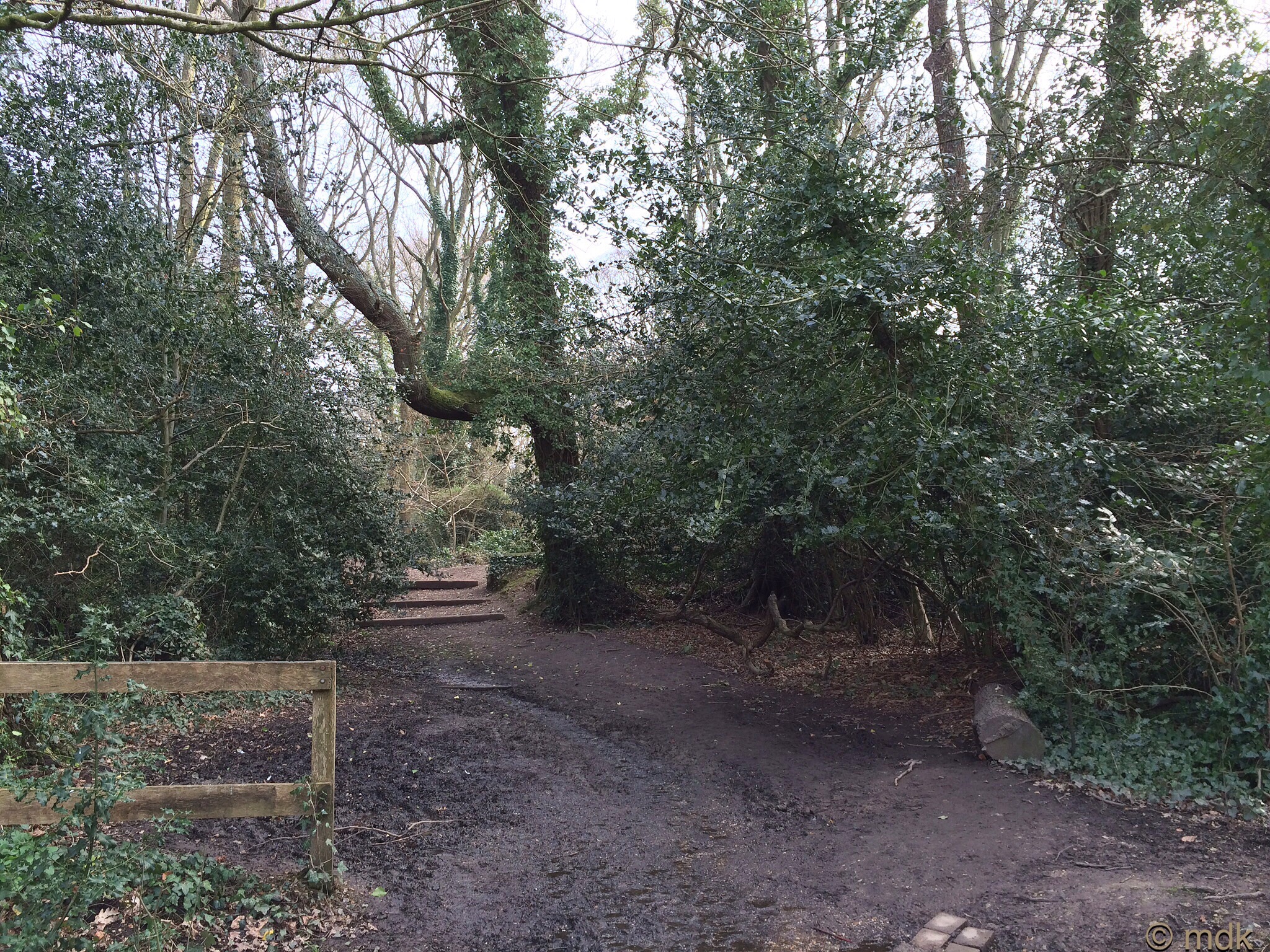 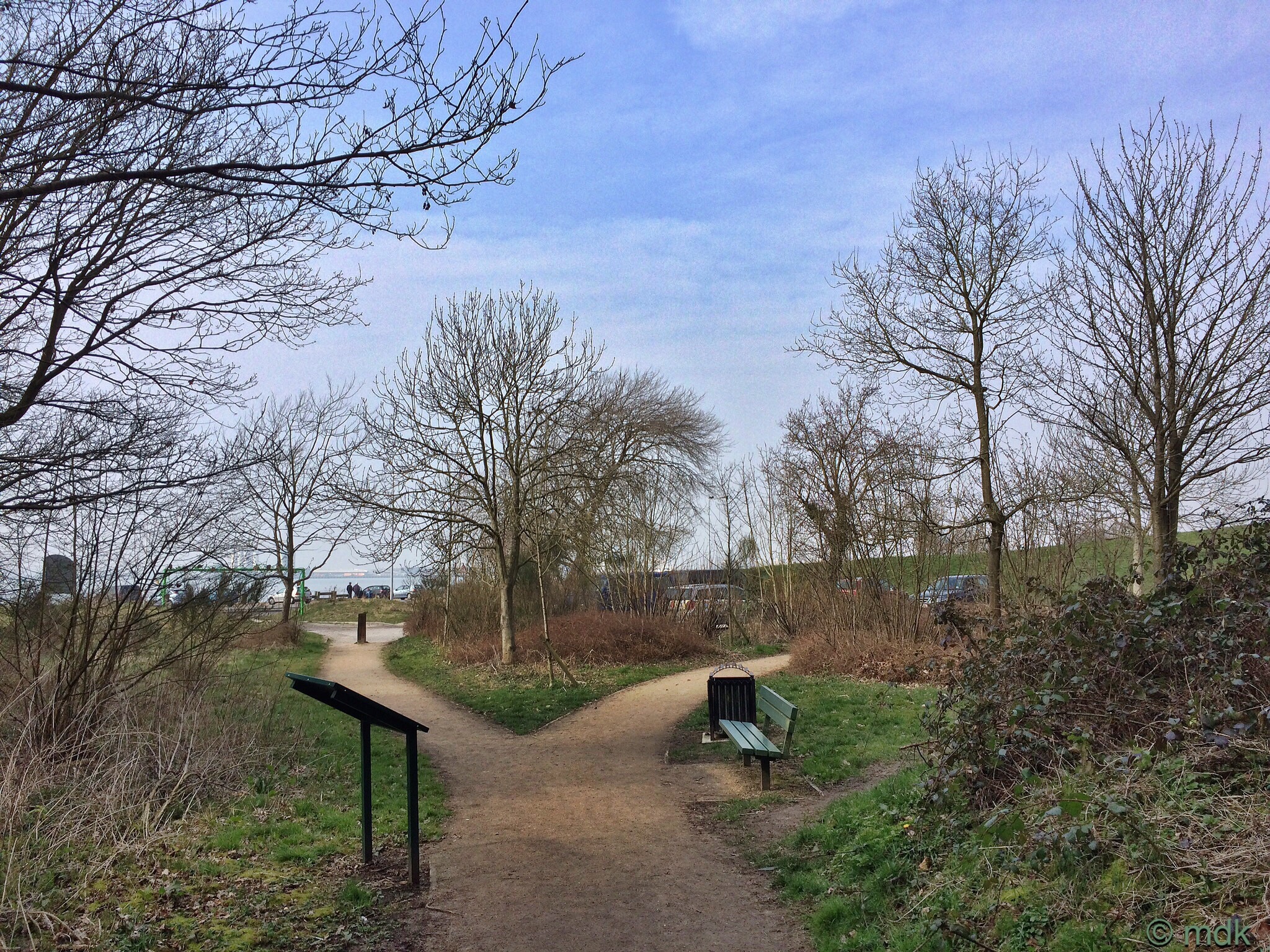 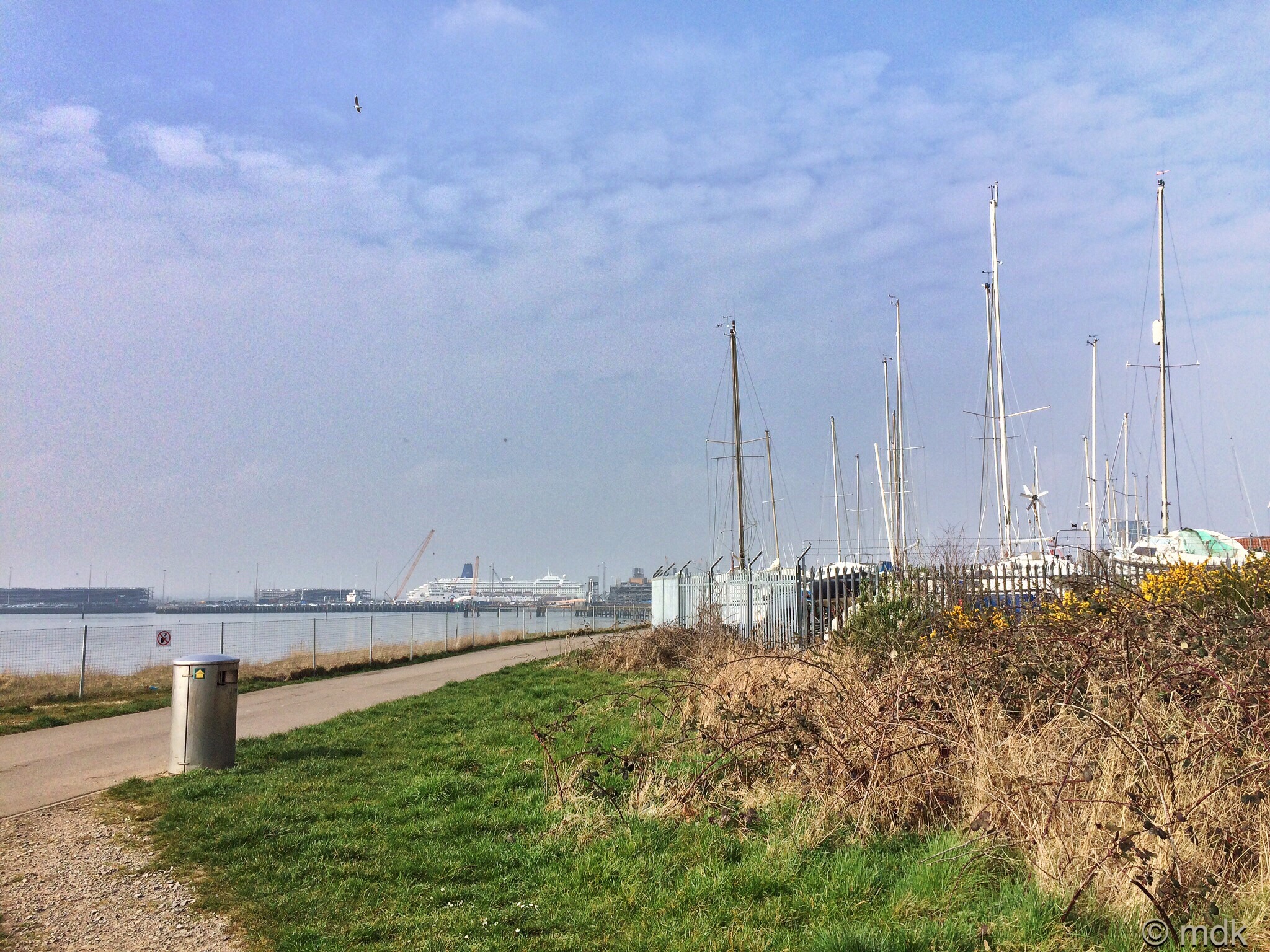 7 thoughts on “Boundaries, stones, woods and lack of energy”