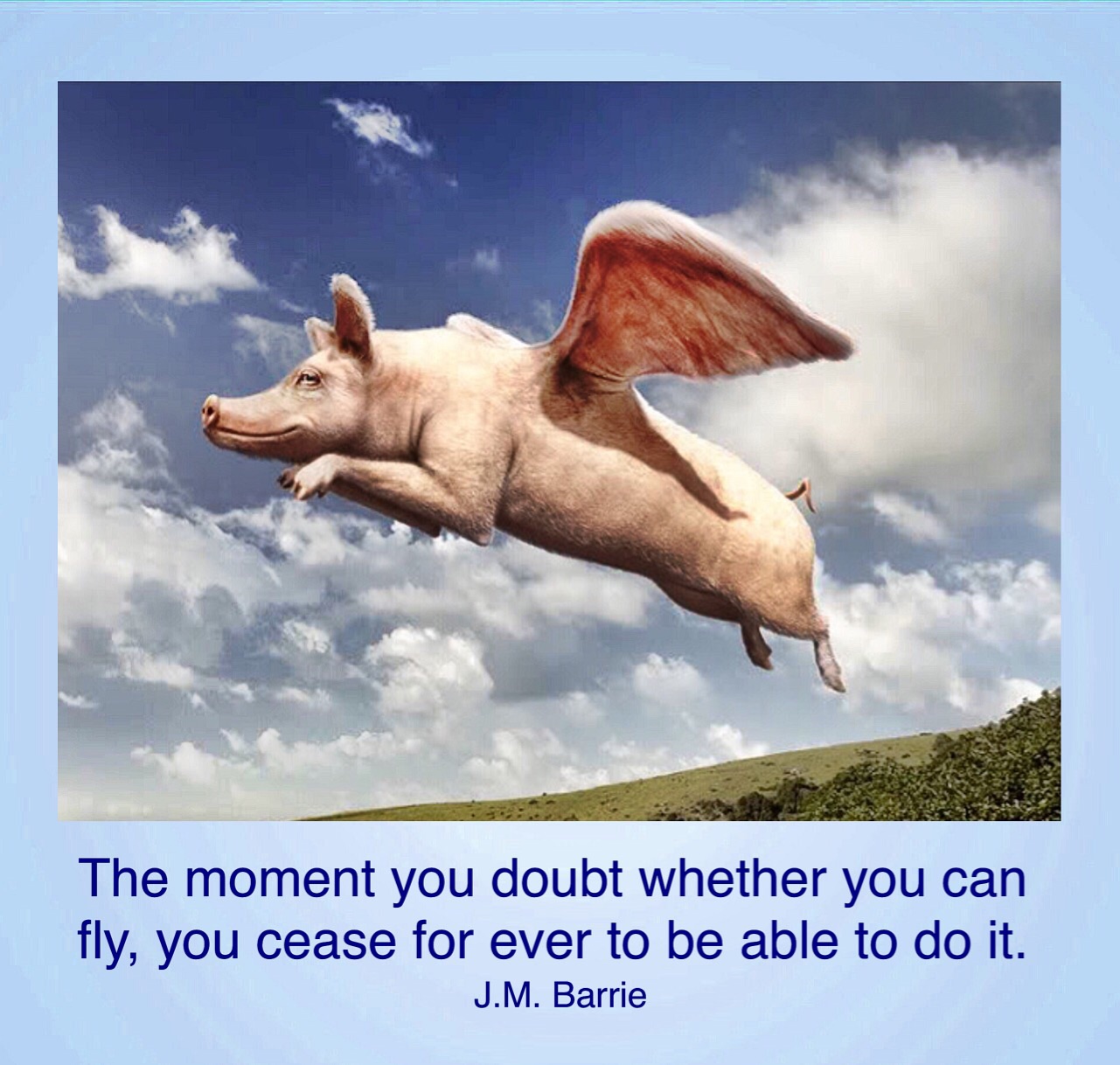 Back at the beginning of 2013 I was on tenterhooks after Mr Bumble’s string of disasters waiting to hear whether she actually made it to Florida and her one and a half marathons. All evening, between plotting my weekend walk and trying not to eat rubbish, I’d been scanning the news channels for items about Florida bound planes diverted to Outer Mongolia due to a flock of low flying pigs or similar. Then a Facebook message pinged up on my iPad…

Whew, that’s a relief. Just after I’d finished planning the twelve mile walk last night Mr Bumble posted a photo on Facebook. My fingers were trembling as I clicked to have a squizz at it, expecting tangled wreckage, one of those rooms at the airport where they strip search you, a hurricane, tsunami or metiorite, you never can tell with Mr Bumble. It was a photo of her at the Disney expo with her Walk the Walk bra t-shirt and Mickey Mouse ears. She’s arrived, in one piece and her luggage intact. Now she’s just got one and a half marathons ahead of her and we all know she can do that with her eyes closed.

Now I could stop worrying about her and get on with my own twelve mile walk. Just after nine I set off into a crisp bright morning. It didn’t take long to reach the river but the footpath at Monks Walk was a muddy mess so I was concerned I’d find it flooded. Before I’d even set foot on the park, my trainers were filthy. The park swans seemed to be having a party, masses of them we’re milling about by the first river bend. There were quite a few people too, dog walkers, cyclists, fishermen all taking advantage of a little winter sun. 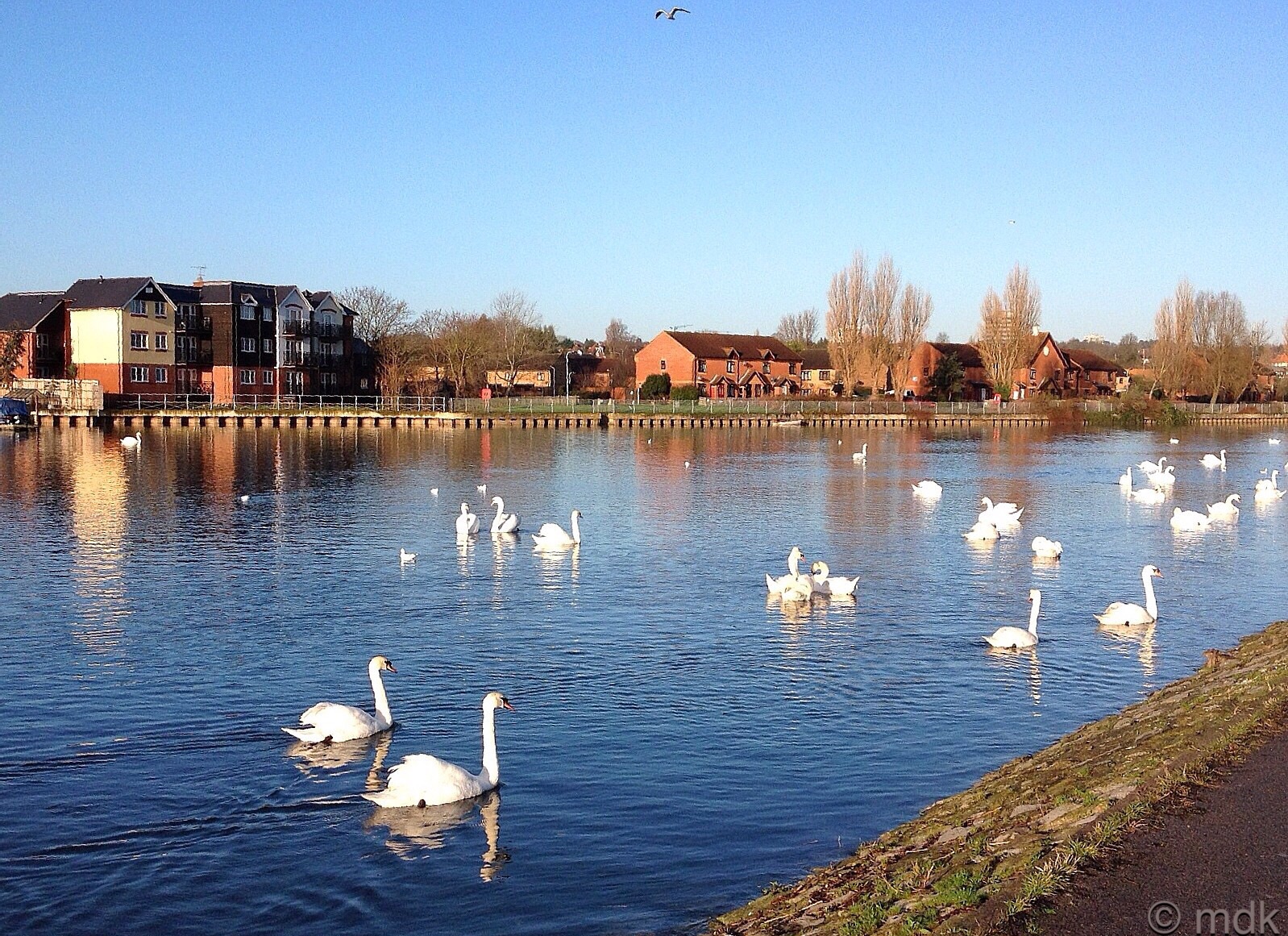 At the second bend a woman was walking her dog wearing rollerblades. She seemed quite slow and awkward, not quite in control, and I wondered if it was wise for her to be so close to the river. Maybe she’s still learning but it looked like hard work. Still, if it was me I’d have been in the river or on my bum. Before we got to Woodmill I overtook her and she stayed behind me, getting further and further back until just before Mansbridge. That’s at least a mile from where I first saw her. If she keeps that up every day she’ll be speeding along like a professional in no time. Good for her I say! I bet she was exhausted when she got home though.

The path was free of giant puddles and I breathed a sigh of relief. Now I’d almost reached the first of my new routes and started looking around for the footpath. Nothing looked quite right though and I couldn’t seem to get my bearings. The sun was in my eyes and I was distracted by a plane flying low above me, coming in to land. On I went, through little back streets searching for a road sign. By the time I saw one it was too late I’d missed the turn and was closer to the end of the path than the beginning so I pressed on back to Mansbridge Road. Before long I passed where my footpath came out. Maybe next time I’ll try taking it when I’m walking the other way so I can find out exactly where the other end is.

The next detour from my normal route was coming up but this time I knew exactly where it was. Every time I did my training for Moonwalk 2011 I passed the Lakeside Country Park and the steam railway, it’s about a mile before the Swan Centre. What I didn’t know then was that you could walk right through, or what I was going to find at the other end. Still, how bad could it be? At the Lakeside Cafe I was tempted to stop for a quick coffee before I carried on, I was missing my latte at the Swan Centre after all. It took a supreme act of willpower to walk past I can tell you.

In the end I was glad I didn’t stop or I’d have missed the rabbit that hopped across the path in front of me. It was a tad on the muddy side which was a bit of a worry but the view over the lake made up for the squelchy trainers. The nice weather had bought out a few fishermen and some dog walkers so I had plenty of company. Then the path ahead seemed to disappear under some fast flowing water. It looked like I’d have to turn back but, as I’d not even hit five miles, I was going to come up short on the twelve if I did. Luckily, a woman walking two labradors passed me just then. If she was going that way there must be a way through so I followed to a little bridge crossing the stream. Big sigh of relief.

Now there was walking in the road and this time there were no grass verges. When I passed some horses in a field I had a horrible feeling of déjà Vu remembering the dreadful muddy road last week. At least they weren’t wearing cow pyjamas this time. Then I passed a little church with the prettiest lych gate and suddenly I felt better about the whole thing. After about a mile of walking in the road I saw a parked tractor and had to risk going round. Luckily I managed to pass unscathed. When I got back to safety, joy of joy, there was a footpath. I almost did a little happy dance until I remembered the farmers behind the tractor. Trees and fields were giving way to houses and road signs I recognised. Things were looking up.

Then I stopped concentrating and just enjoyed walking. Big mistake! Now I was on a major road and suddenly I saw a sign for Eastleigh. Surely that couldn’t be right, that was where I’d come from not where I was going? A map check told me I’d missed my turn, yet again and was actually headed in comepletely the wrong direction. I’m pretty sure there’s a pattern developing here. There was nothing for it but to turn round and retrace my steps. Sometimes I’m my own worst enemy because I actually know the road and there’s a giant MacDonalds right on the corner, how could I have missed those golden arches?

By now I’d passed the half way point and the proximity of Mackie D was making me think of chocolate milk shake. I really could have done with one about then. This stretch of road is junk food city, there are fast food emporia of every kind. It’s a wonder the place isn’t awash with super sized people on mobility scooters. When I came to the Burger King sign the chocolate milk shake craving got so bad I was actually arguing with myself.
‘go on, you’ve walked off the calories already.’
‘why come all this way and blow all the good work on a poxy drink?’
‘You’d hardly have to stop walking, just go in and grab one then drink as you walk.’
With super human self restraint I walked past although I did open my first packet of yogurt coated raspberries as a kind of sweetie consolation prize. Even then I told myself I might stop at Burger King in town and get a milk shake after I’d been round The Common.

Southampton Common is familiar territory. Mother, Alex and I used to come for picnics when I was little and I remember splashing in the paddling pool with my nephews who are all closer in age to me than Alex. Then of course there are all my Race For Life memories, they’re always round the common. There are three hundred and twenty six acres of it, criss crossed with paths, so it’s easy to get lost, especially for someone as good at it as me. The plan was to do a full lap, pass the historic cemetary and end at the Cowherds pub.

Once I’d reached the end of the nice paved path, it quickly became clear a good part of my Common walk was going to be a no go. The mud was thick and slippery, never mind worrying about my trainers, I was worried about falling on my arse. After a couple of slips I decided to cut my losses and go back to the road until I got to the top of The Avenue. The graffiti in the underpass was interesting, normally it’s just a load of tags and swear words but today there was a whole diatribe about council cuts. I have to say it was pretty well done and thought provoking. Hopefully the council will take notice and keep the clubs and play centres open. 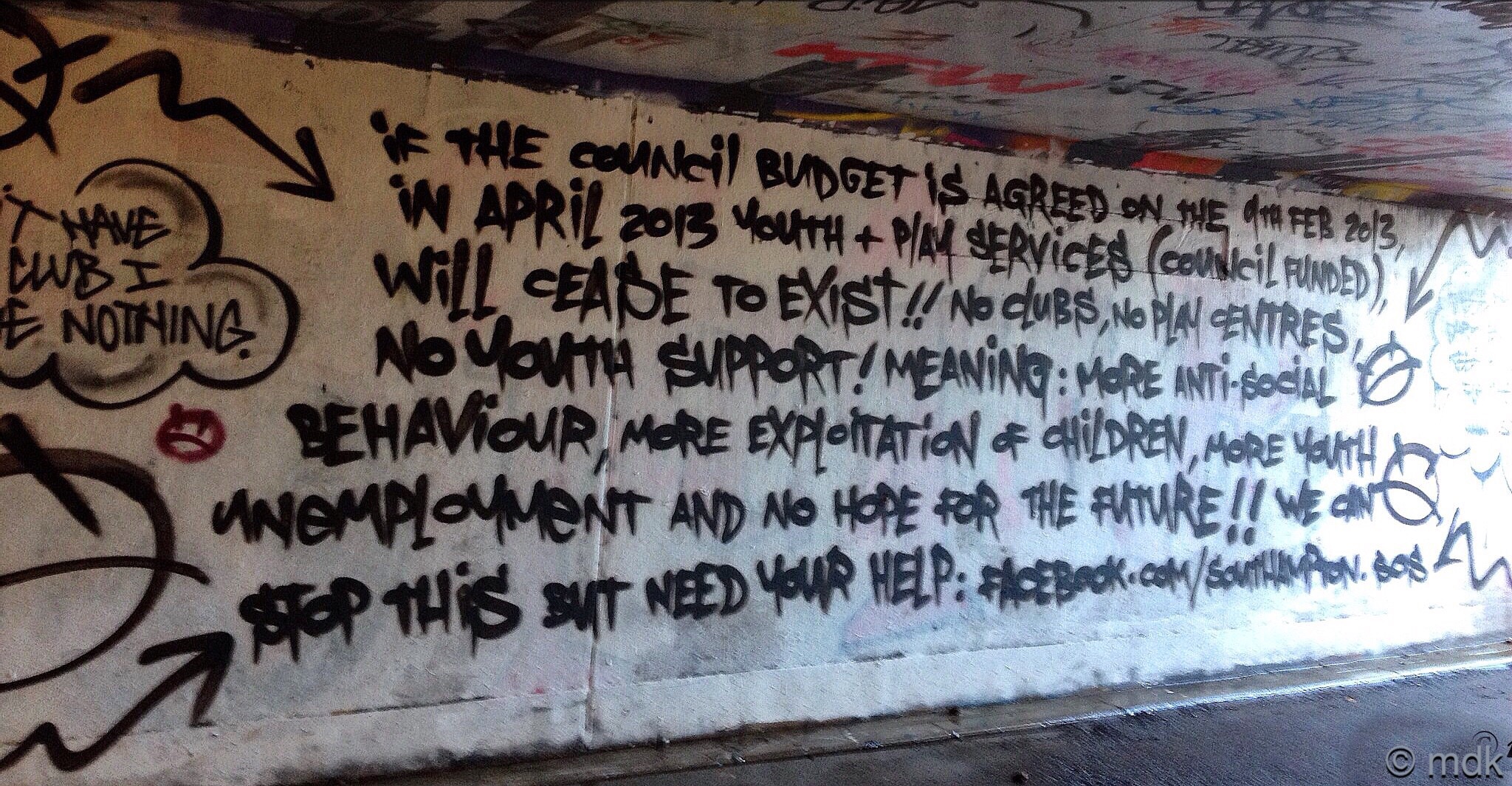 For the rest of my Common walk I kept to the path. Seeing how fast the little stream was flowing and how big it was I’m pretty sure I made the right decision. Of course I took the wrong path (what a surprise) and didn’t walk past the cemetery or the lake either but it may have been too muddy anyway so it was no great loss. There was just one little fluffy cloud in the sky and sun was actually feeling quite warm as I came to the last stretch, although it could have been all the power walking making me hot. By the time I came back out on to The Avenue, down by the Cowherds, I was close to nine miles and pretty much on target as far as distance was concerned. 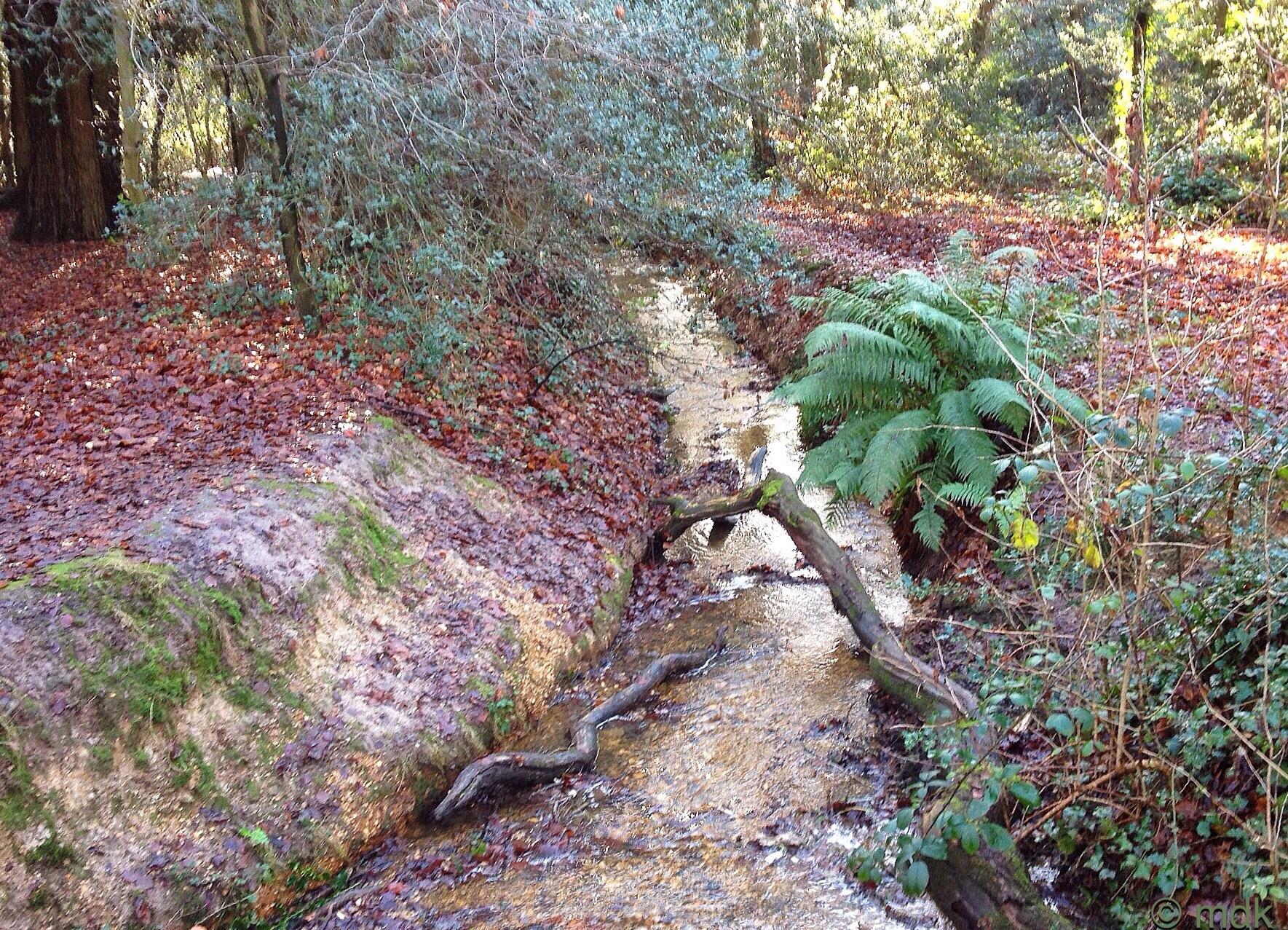 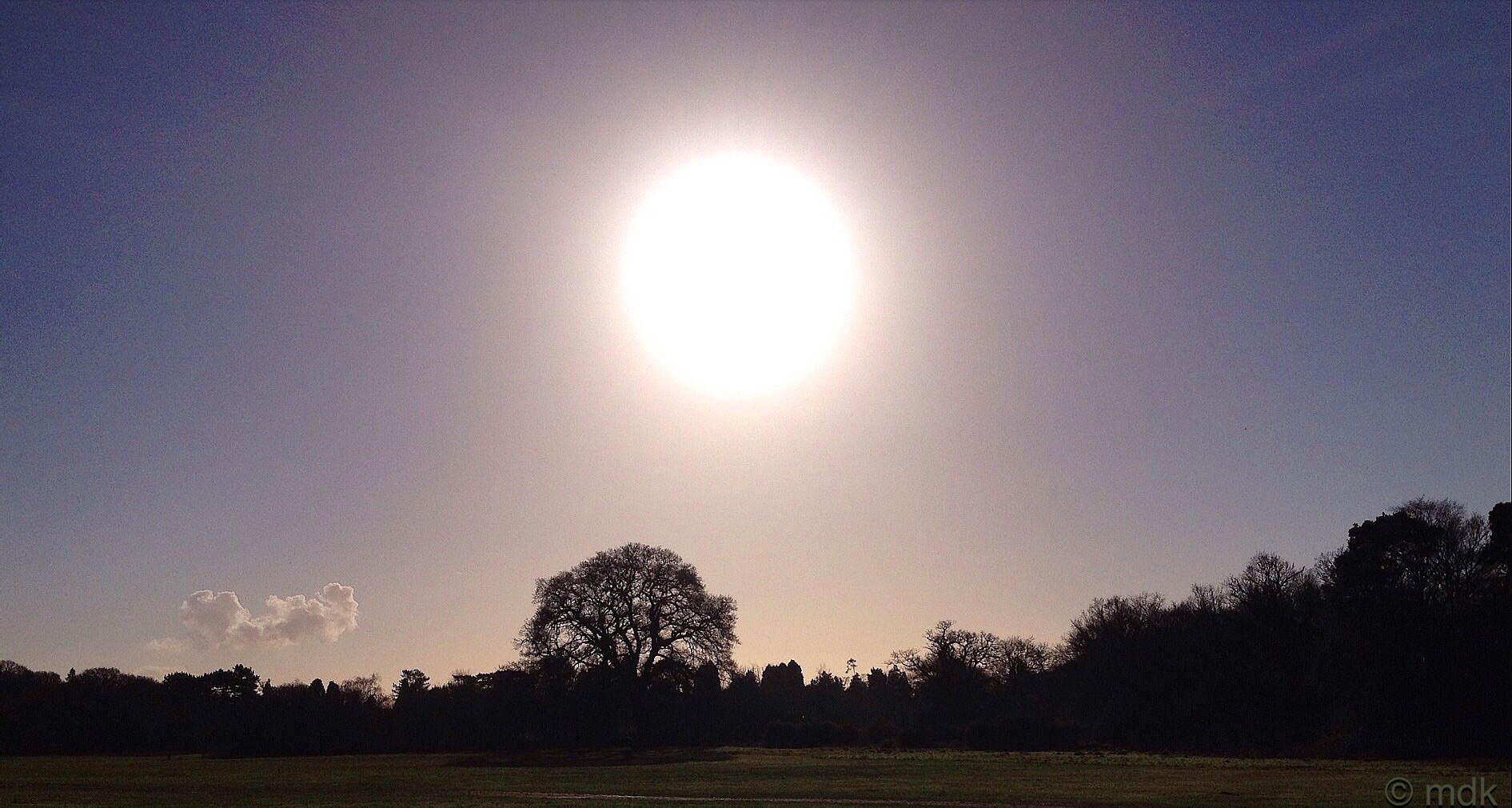 Now I was more or less back in the centre of town but the thought of a diversion to Above Bar for a Burger King milk shake had somehow lost its appeal. In the end I kept to the original plan and walked past the old Mad House Building and back across the Big Bridge. It was a bit sad to see the old building, always a hive of activity, all deserted with the signs taken down. I know I hated working there but my team and I had some wonderful times despite the horrible job. Where once there had been a bustling area, filled with Mad House workers, not to mention the tramps, drunks and beggars, there was a quiet empty street. As I walked towards the mosque I wondered how the residents and all the shop keepers felt about the change and where the tramps and beggars had relocated to now there were no Mad House staff to prey on.

As I came back out onto the main road I passed the ten mile mark then it was over the Big Bridge, with a quick stop to snap the blue sky mirrored in the water and the last stretch towards home. So that’s the twelve miler ticked off, even if it did take three hours forty minutes. Still, given the route, that’s not too shabby. 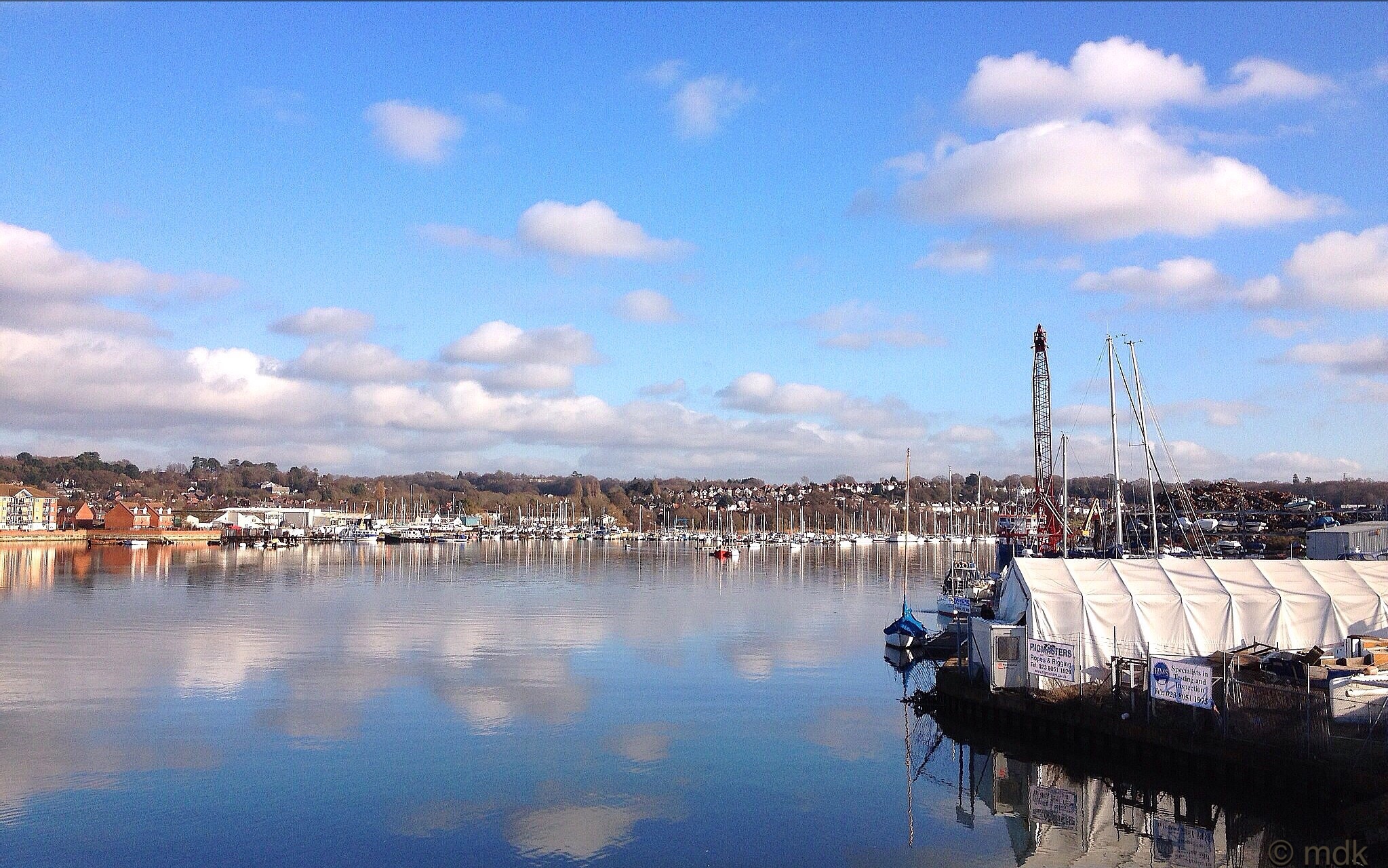 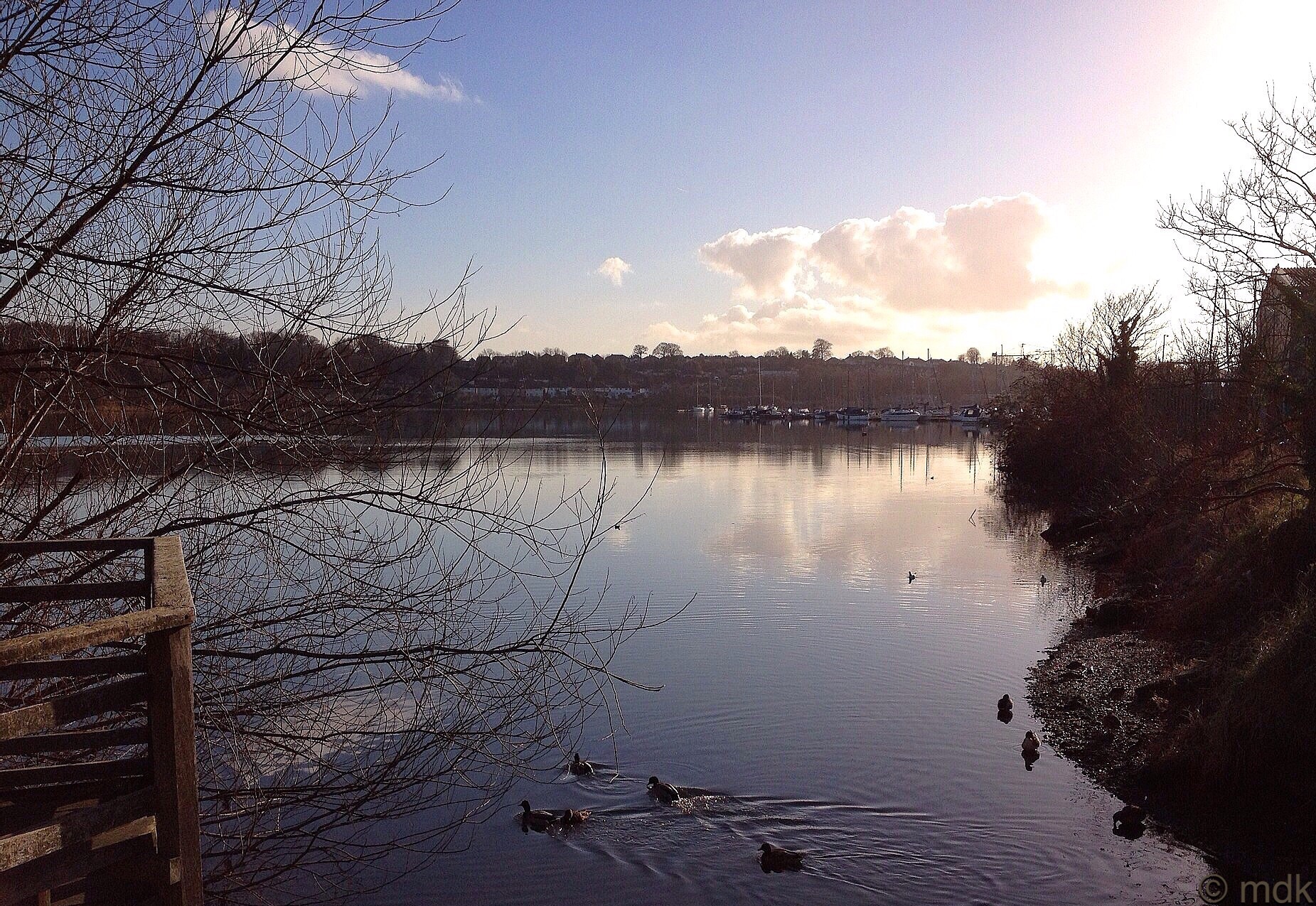