On Monday morning instead of my normal driving lesson we were taking a trip to Micheldever, the Bermuda Triangle of Hampshire. This little village on the northern outskirts of Winchester is the most difficult place on earth to actually find. The number of hours I’ve driven around in circles not finding it doesn’t bear thinking about.

In my teens some friends broke down in Micheldever. My boyfriend at the time and I spent three hours driving round and round in the dark and rain before we found them. There are lots of signposts for the place but none of them actually appear to lead there. To be honest I’m not entirely sure it even exists.

In actual fact we were heading for Popham Airfield which is just outside Micheldever and this is, if anything, even more illusive. When I was expecting Commando Junior we were meant to be joining Commando Senior and our older boys there for a fireworks display. We got very close, close enough to see the bonfire and the fireworks, but all we managed to do was drive past about ten times in different directions. In the end we gave up and went home. Sadly, this is not the only time this has happened.

On Monday it was fairly vital that we actually found the place because we were carrying the guest of honour for a very important occasion with us. This was the day we scattered Commando Senior’s ashes and he was in the car with us. At least this time we had satnav and I’d googled directions just in case.

Our problems began on the motorway. The traffic lights at junction nine, where we had to get off, were out of order. We were stuck for about a mile in a queue of traffic moving at about one mile and hour. This was frustrating in the extreme but we’d allowed a lot more time than the journey takes just in case we got lost. Needless to say, once we left the motorway it wasn’t long before that happened.

I’m not going to go into details but, to cut a long story short, we drove round and round in circles following signposts that led us on a long, convoluted journey along narrow winding country roads back to the original signpost. Eventually, as tempers in the car began to fray, we stumbled upon the right road by sheer fluke when we were actually trying to get back to the main road to start over again. I’m pretty sure Commando Senior was laughing his head off somewhere because he flew from Popham whenever he could, it was his second home.

The wonderful pilots, Chris and Brian, greeted us and assured us that the weather was perfect for flying, although there was a bit of a cross wind. Then they asked if any of us wanted to go up with them. Flying is one of my least favourite things, even in a big jet. There was no way I was doing it. Commando wasn’t exactly keen and neither was his sister, her husband or her children. Commando Junior on the other hand was chomping at the bit.

Once he’d committed himself to the job they explained that there would be no door on the plane. Suddenly he looked a little less keen. To his credit though, he didn’t back out. With that we all trotted outside to look at the plane. It was small. Very small.

Commando Junior was strapped in and taken through some safety instructions. They were nothing like the usual routine you get on an aircraft with oxygen masks, life jacket and the nearest exits in the event of an emergency. The exit was very close and all too obvious. 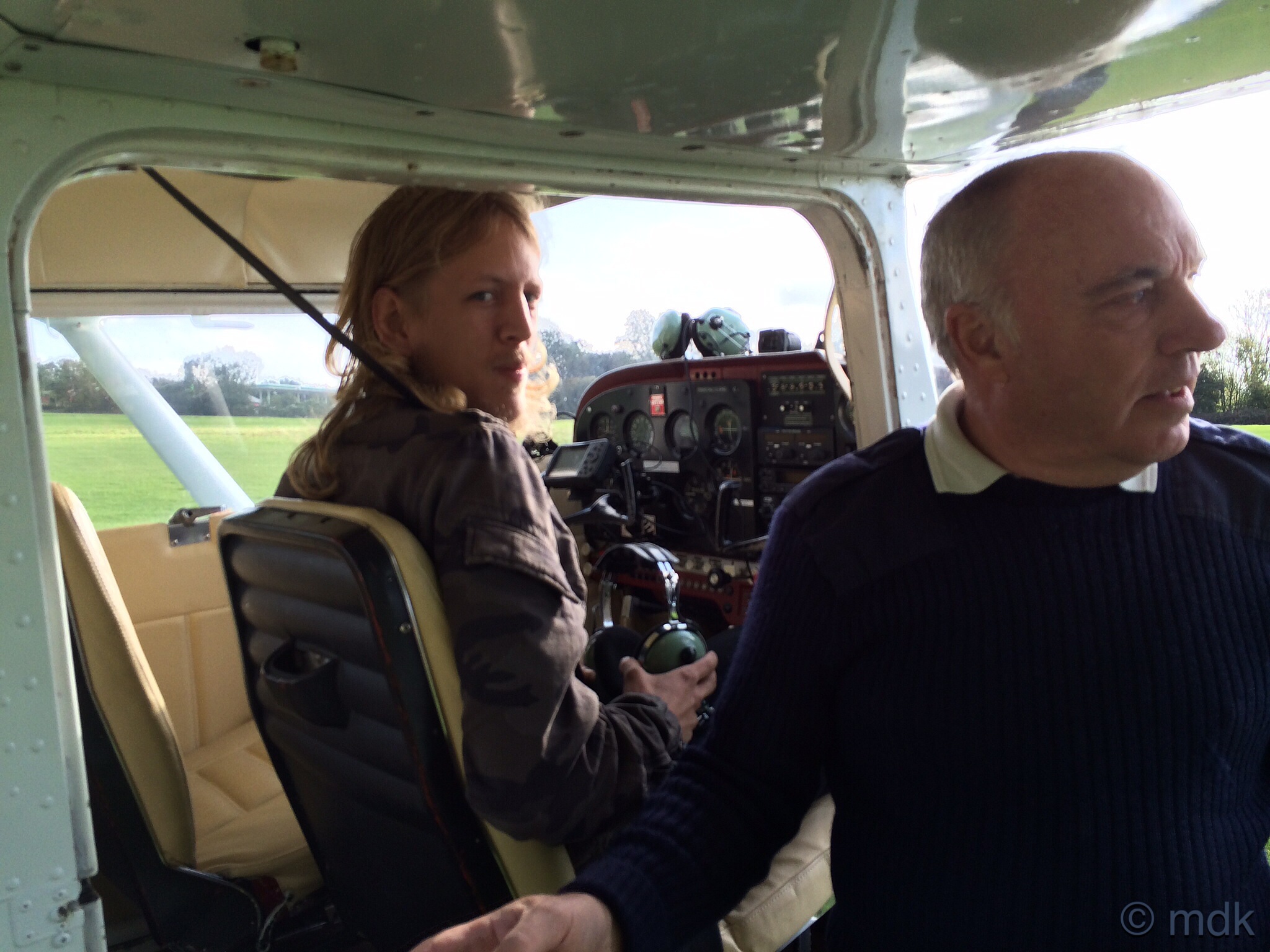 Commando Senior was decanted into a special contraption, a kind of plastic jar with what looked like a Hoover hose leading off it.
“It doesn’t look very sophisticated but it’s the best way to do the job,” Brian explained. “This isn’t a sad occasion, it’s a celebration. When I go it’ll be how my ashes are scattered.”
It was nice to know they’d done this kind of thing before and it was nice that Commando Senior had flown with these men before. 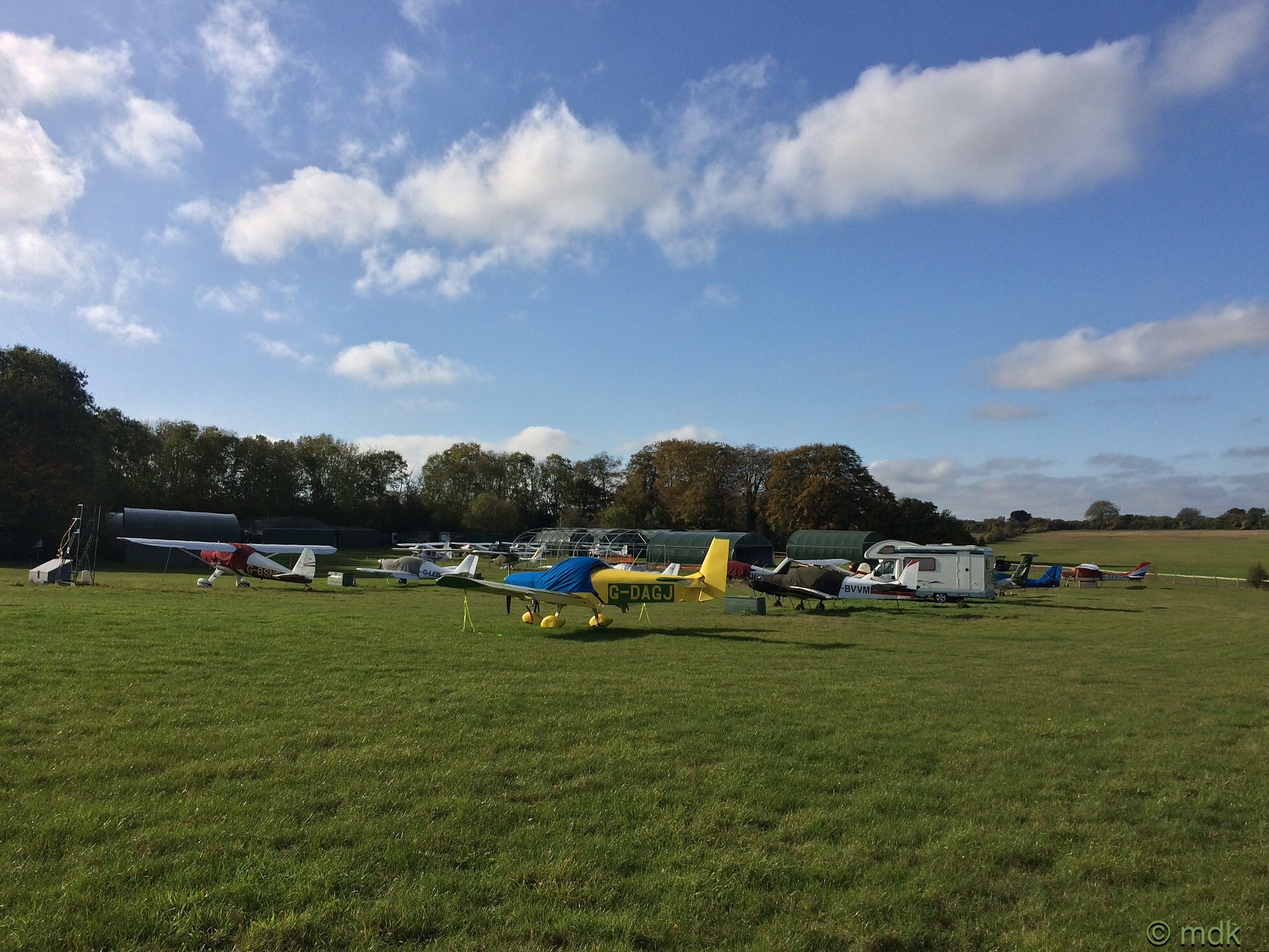 We all got in our cars and drove off to a distant fence to wait for the man who would show us where we could safely stand beside the grass runway. None of us really knew what we were doing or what to expect. After a short wait the little plane taxied across the grass towards us. For a horrible moment it seemed as if it was going to take off right over our heads and I was preparing to prostrate myself on the grass to avoid decapitation. Thankfully it stopped just short of the fence and Commando Junior waved nervously from the cockpit. 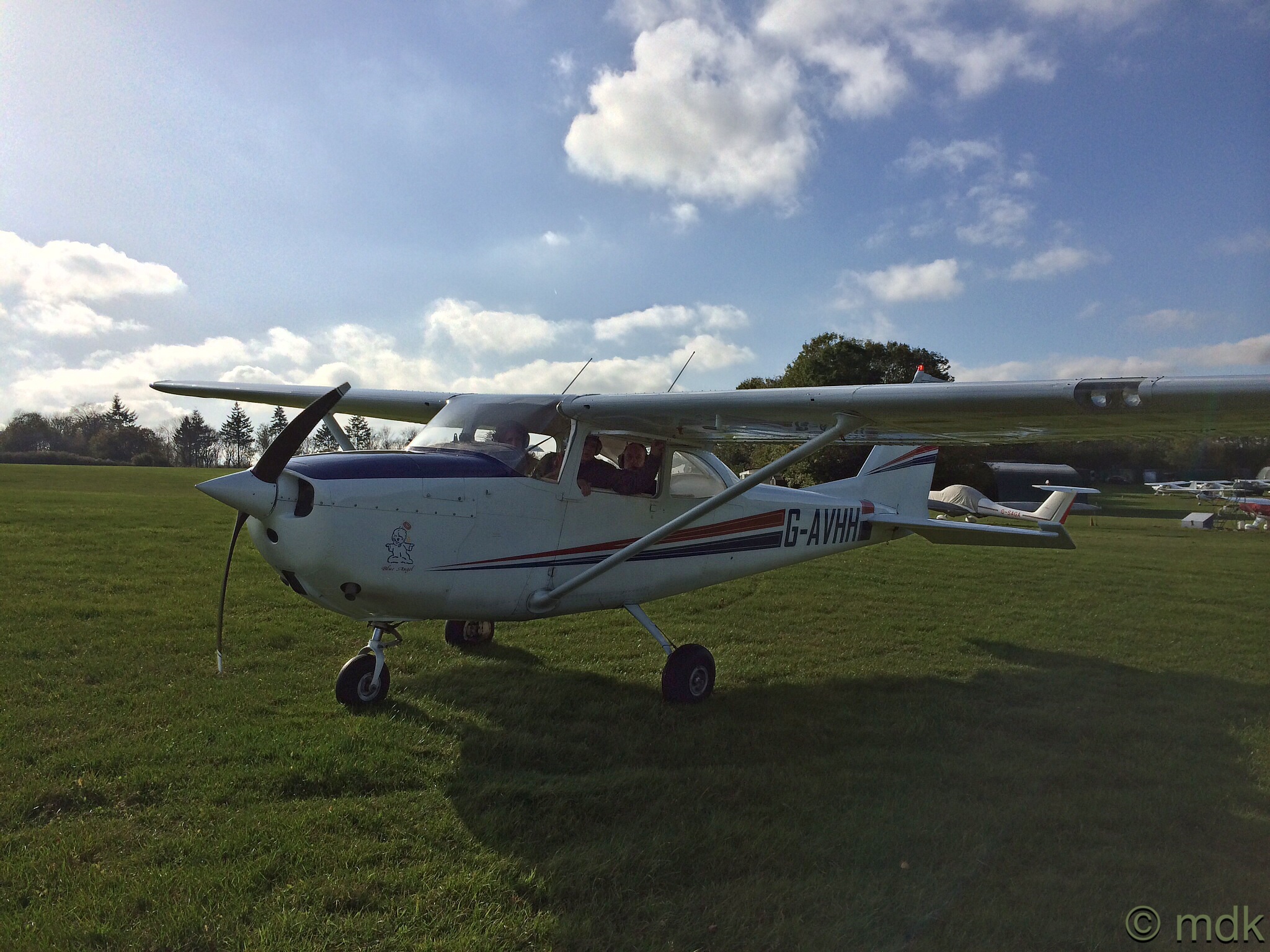 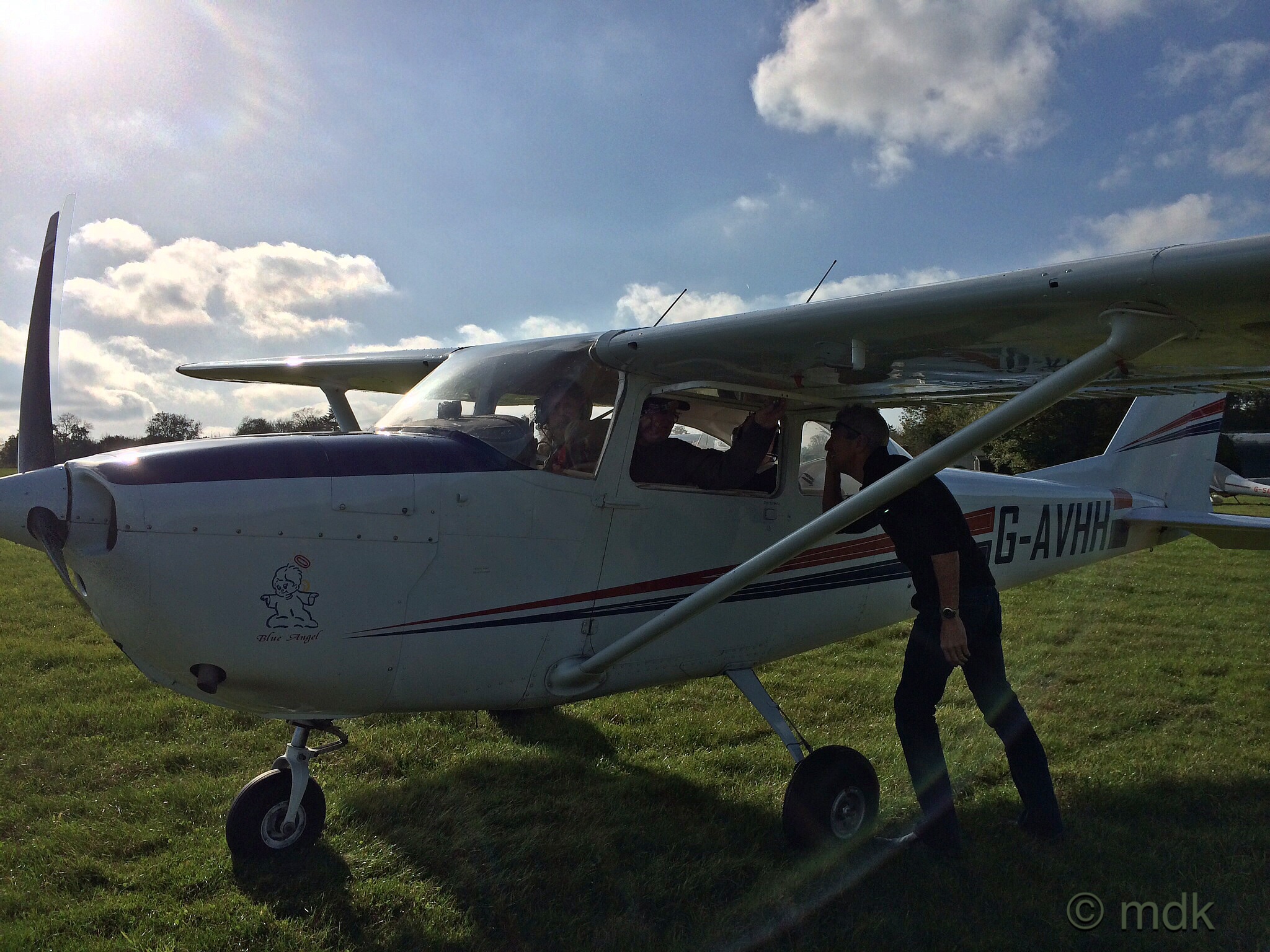 Brian explained to Commando that he’d pass over once, circle the airfield and then pass over a second time when Commando Senior’s ashes would be released.
“Chances are you won’t really see them because they will be taken by the wind,” Brian said.
As the little plane taxied to the end of the grass runway a little golf buggy appeared out of nowhere and led us to a spot where we could safely watch the proceedings. The plane was a tiny speck on the grass in the distance by this time and we stood waiting for takeoff. I don’t mind admitting I was nervous but probably not as nervous as Commando Junior sitting next to the open door waiting to leave the ground. 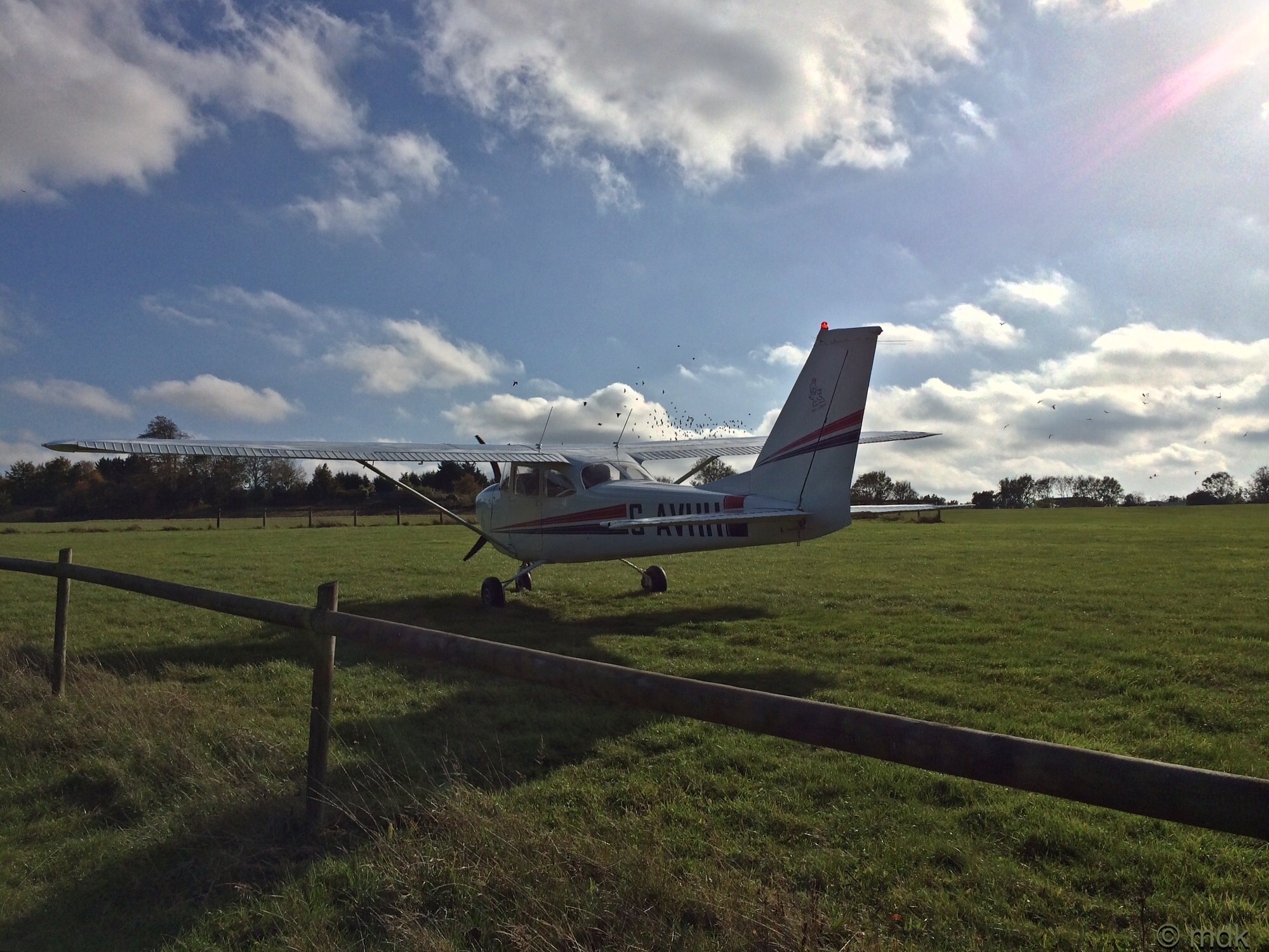 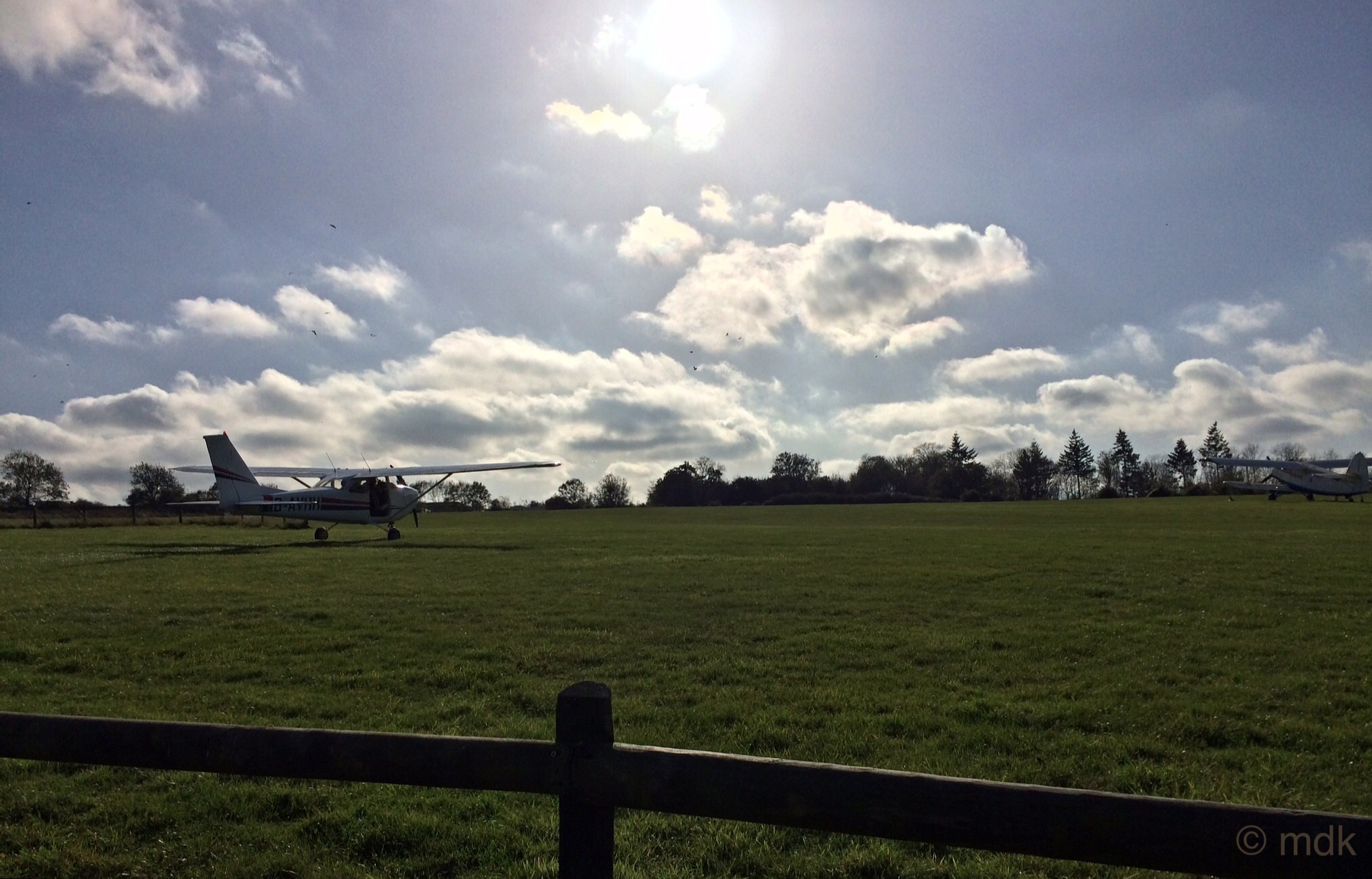 The plane took off and soon disappeared behind the trees. We stood around looking out over the beautiful Hampshire fields waiting for it to appear again while a steady stream of other small planes taxied past getting ready for their own take offs. Eventually our plane appeared again as a tiny distant dot in the sky. It passed and we could see Commando Junior waving a little nervously through the open door. 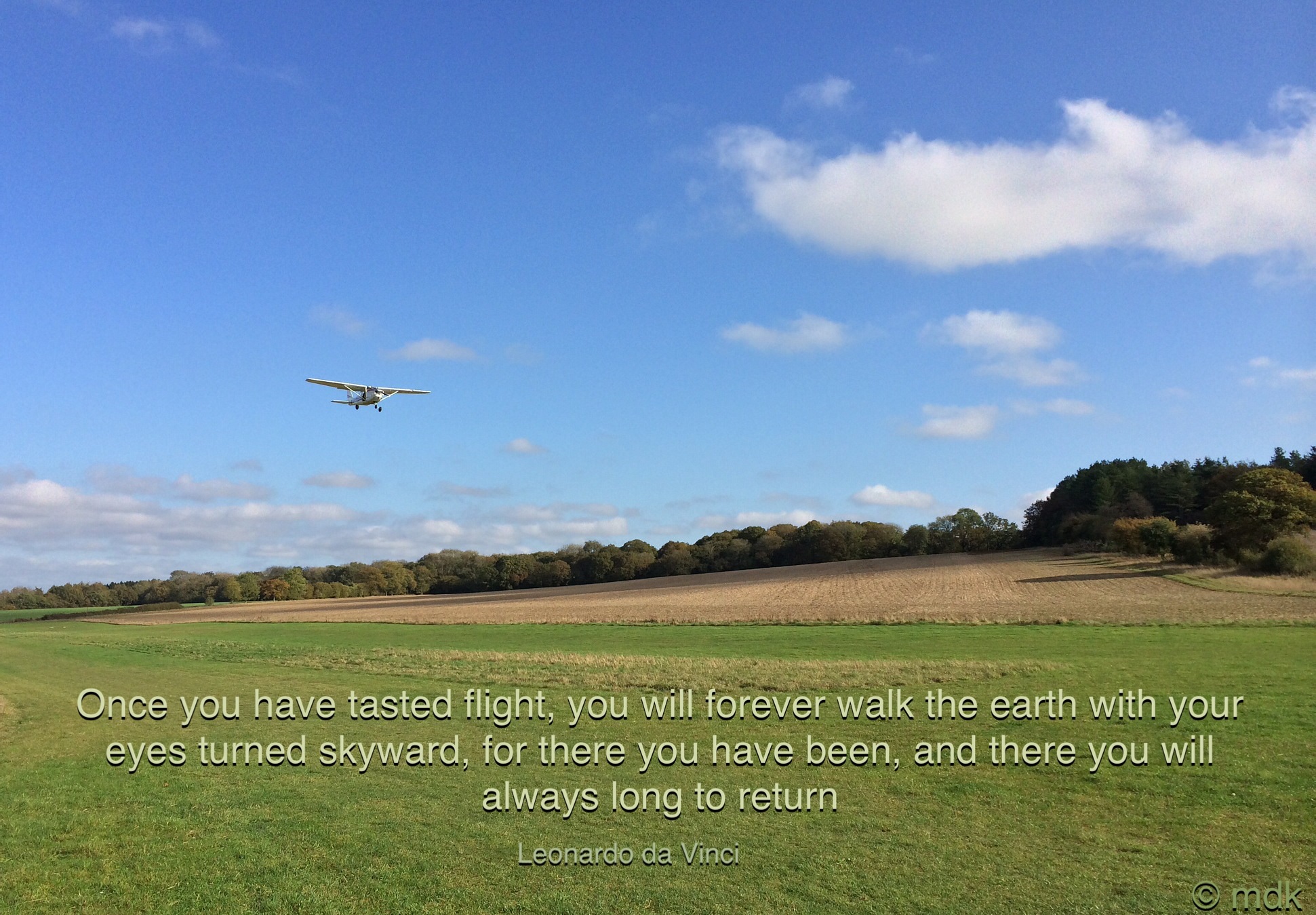 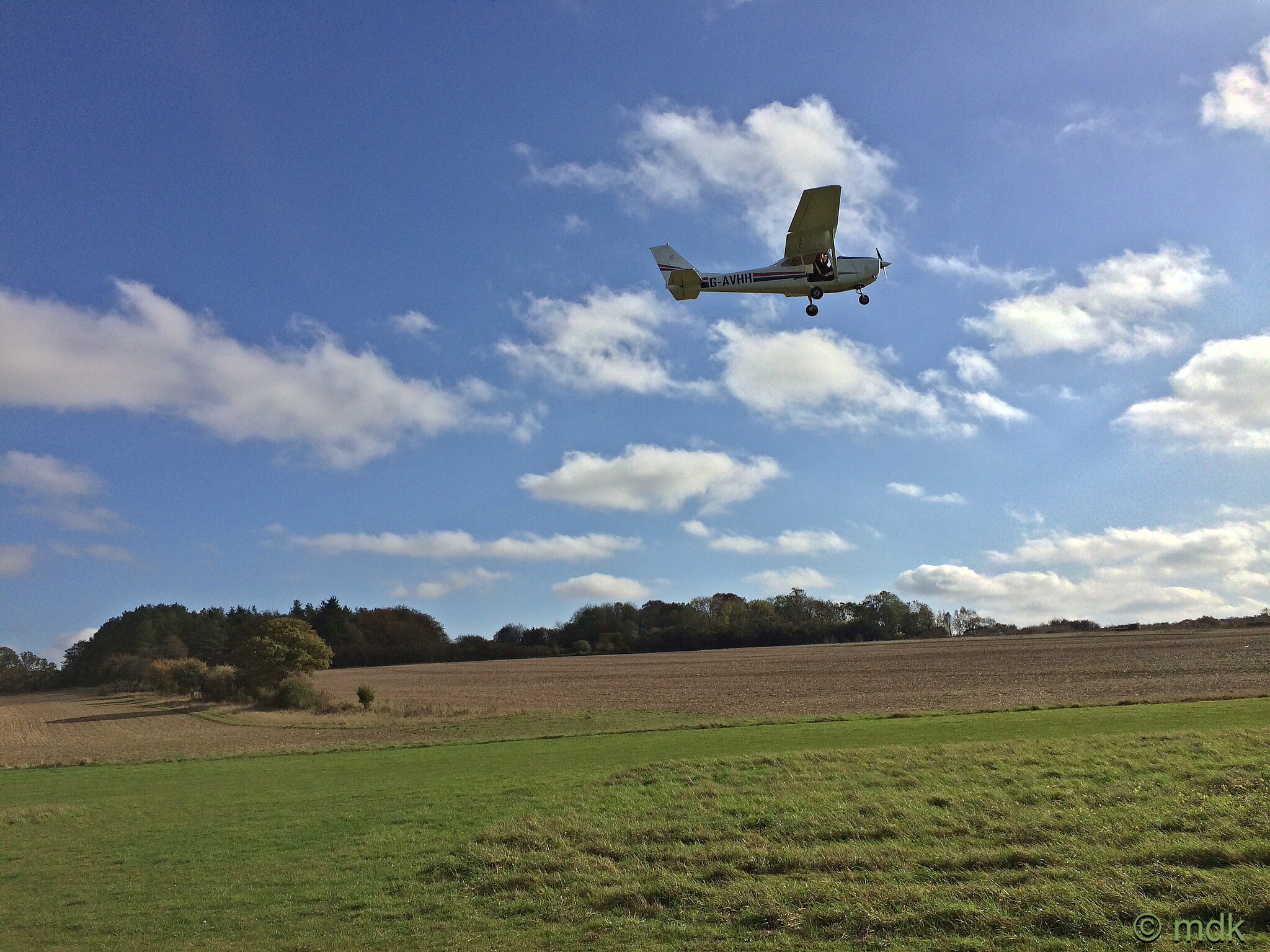 After a while it appeared again. This was the moment we’d been waiting for. It passed high above us, turned and circled sharply. There was a tiny puff of white, so quick you could have blinked and missed it and Commando Senior was set free into the beautiful blue sky. 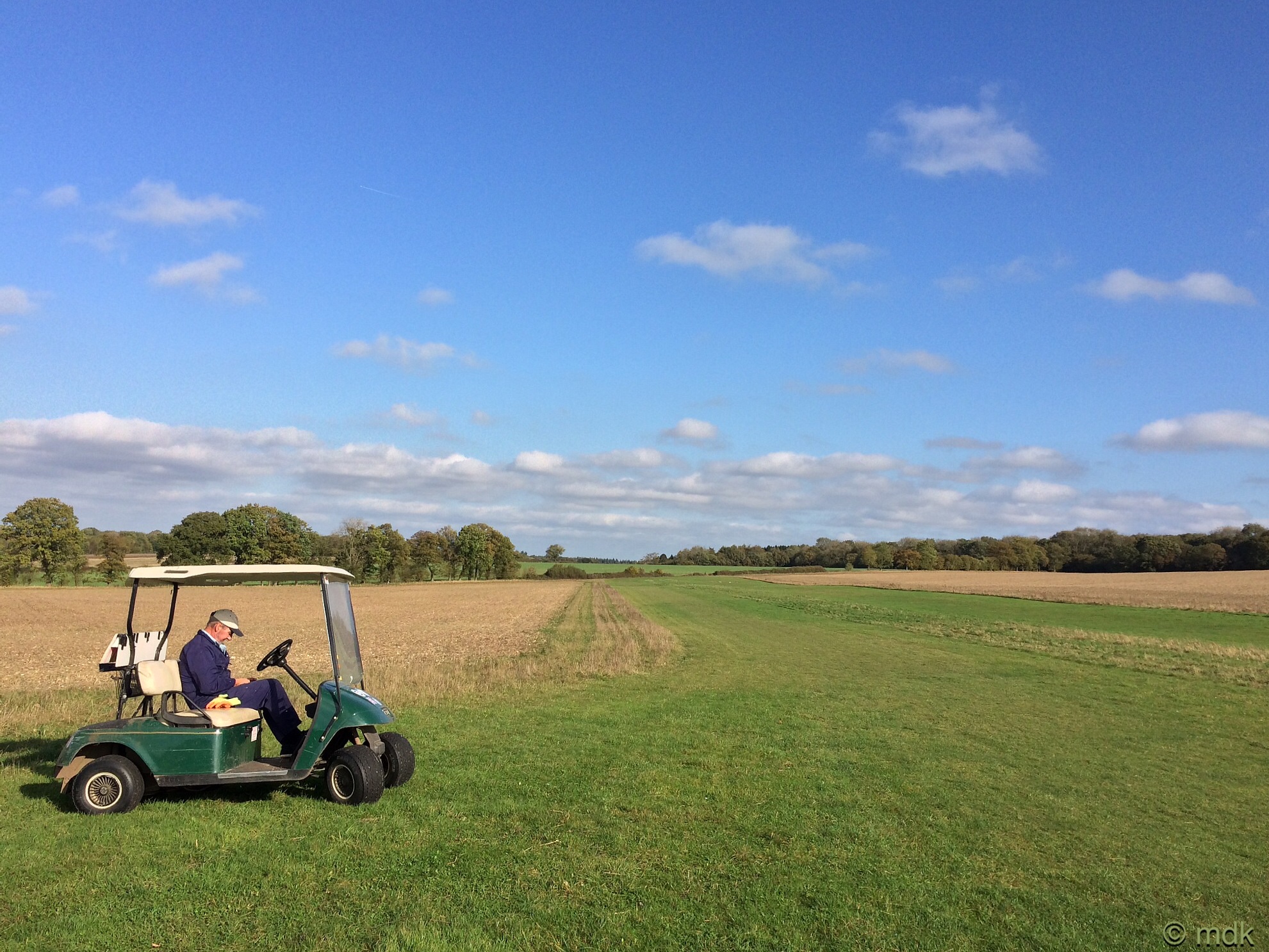 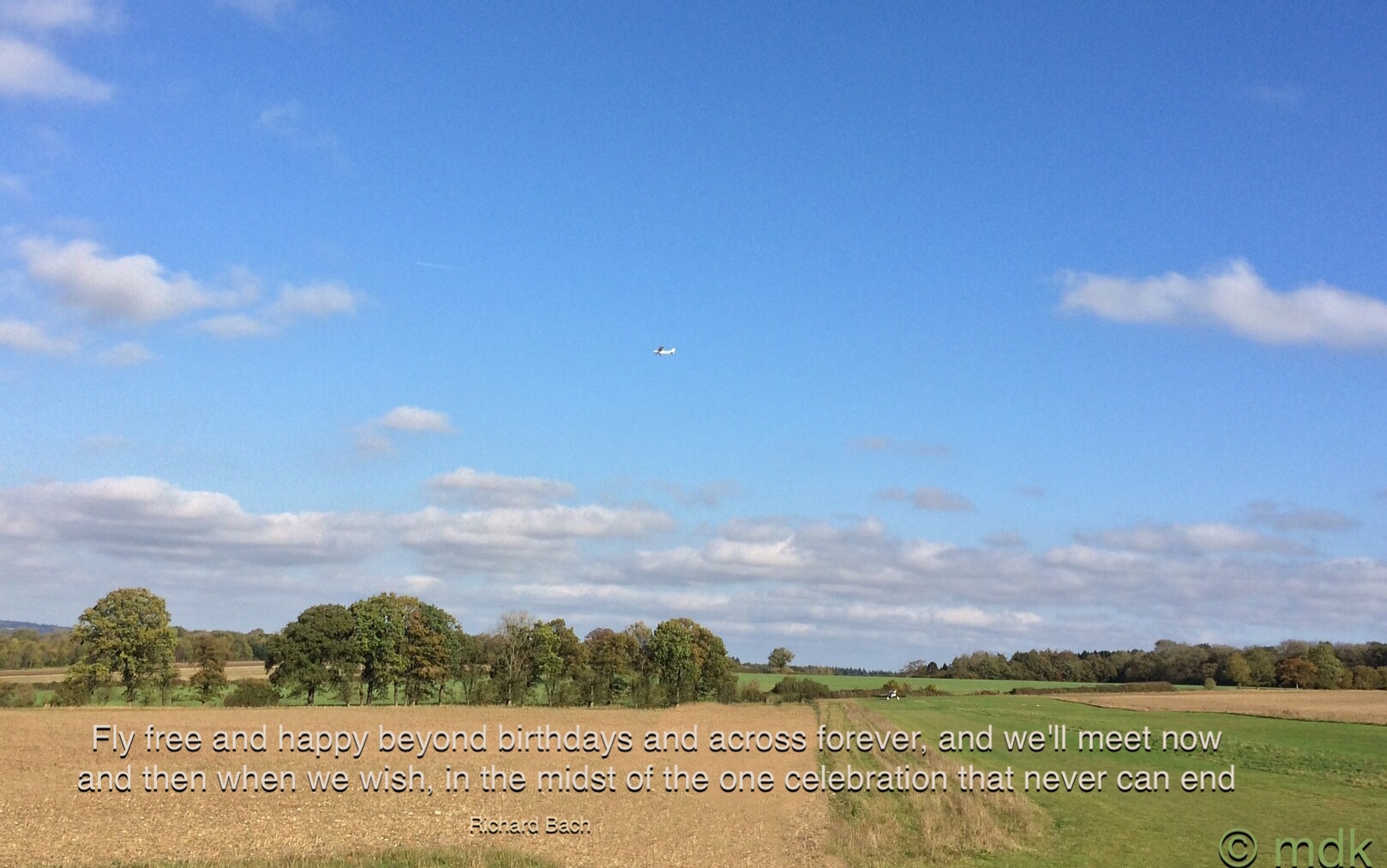 Before long the little plane landed and Commando Junior was back on terra firma again after his last flight with his grandad. 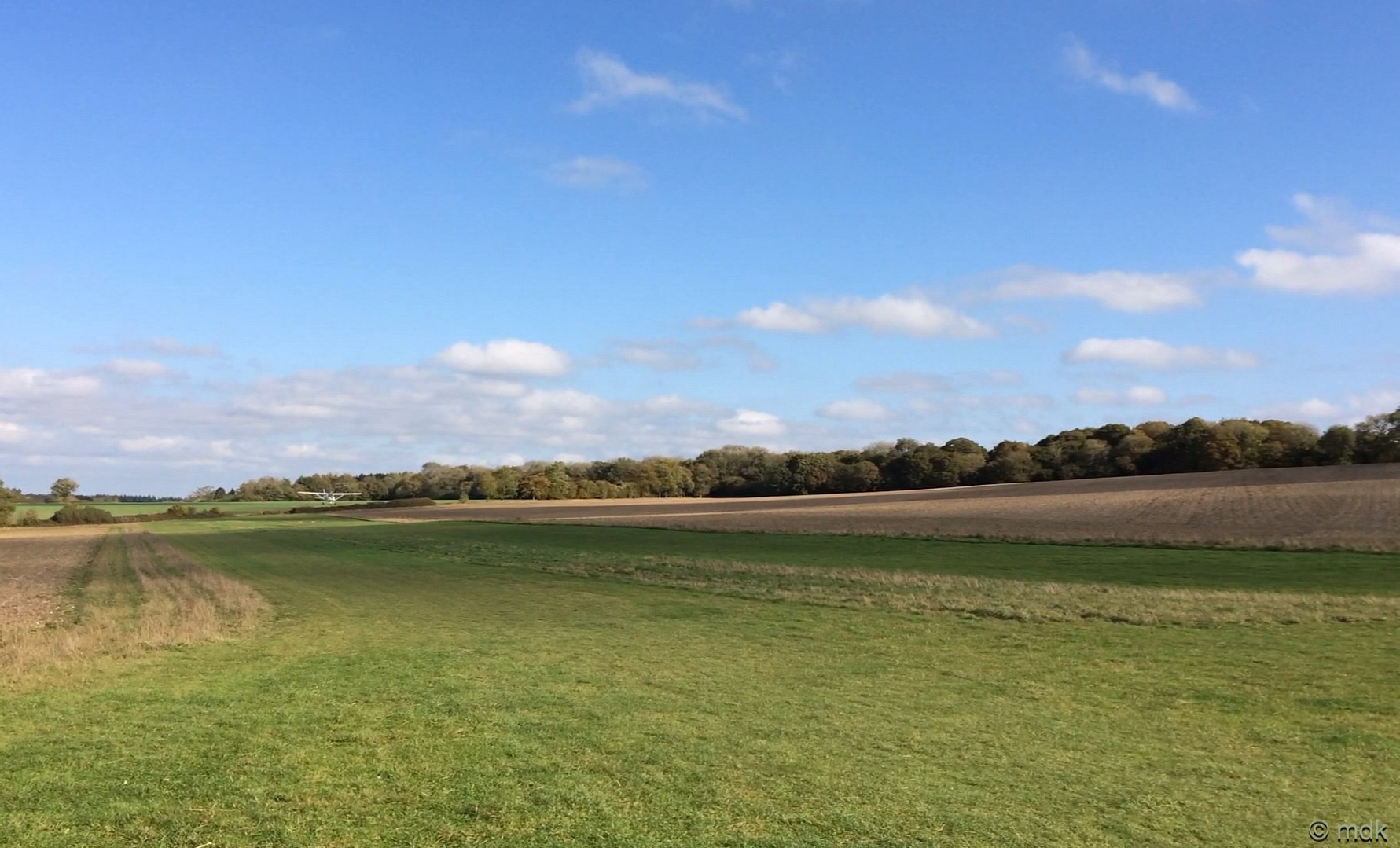 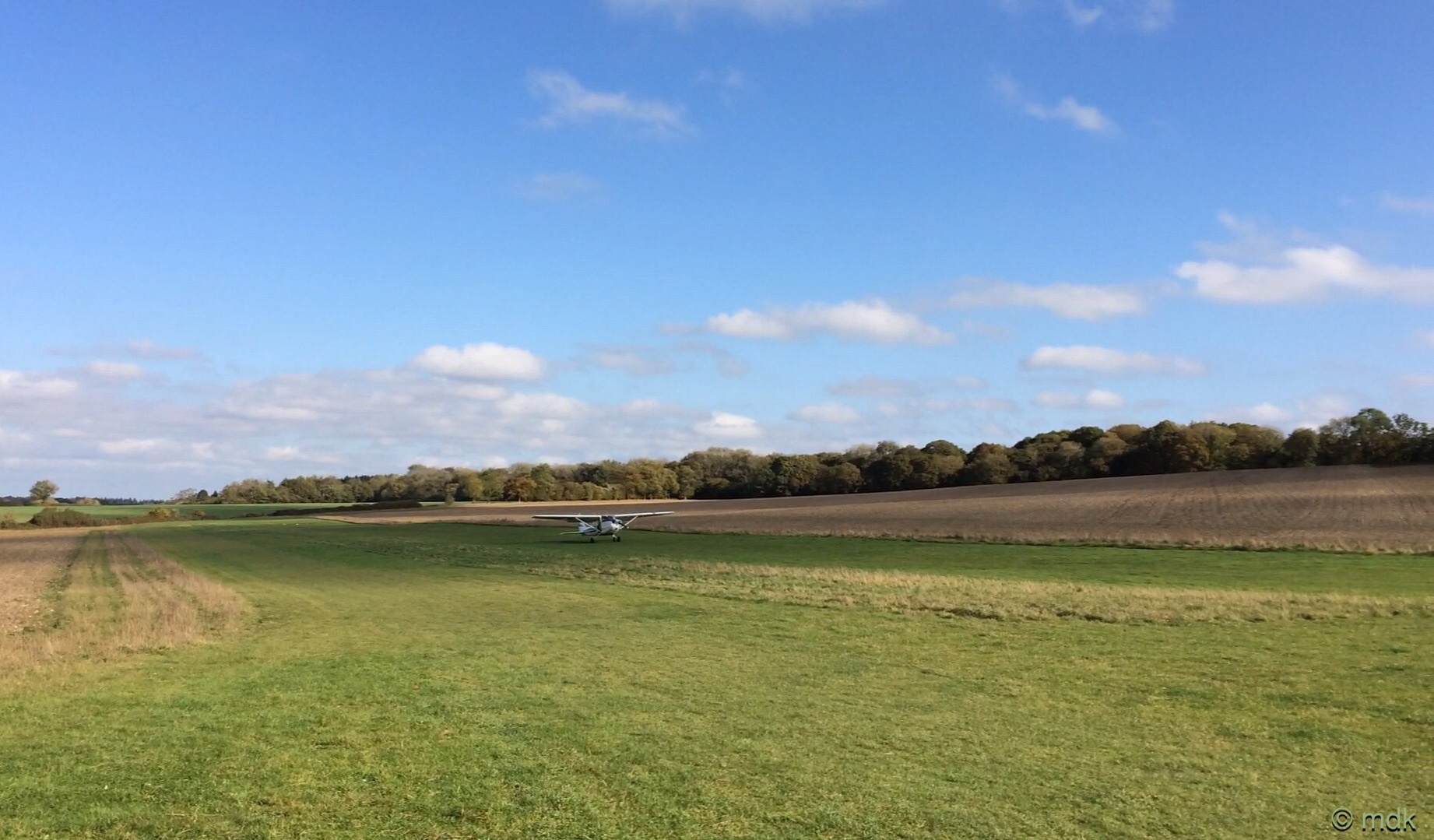