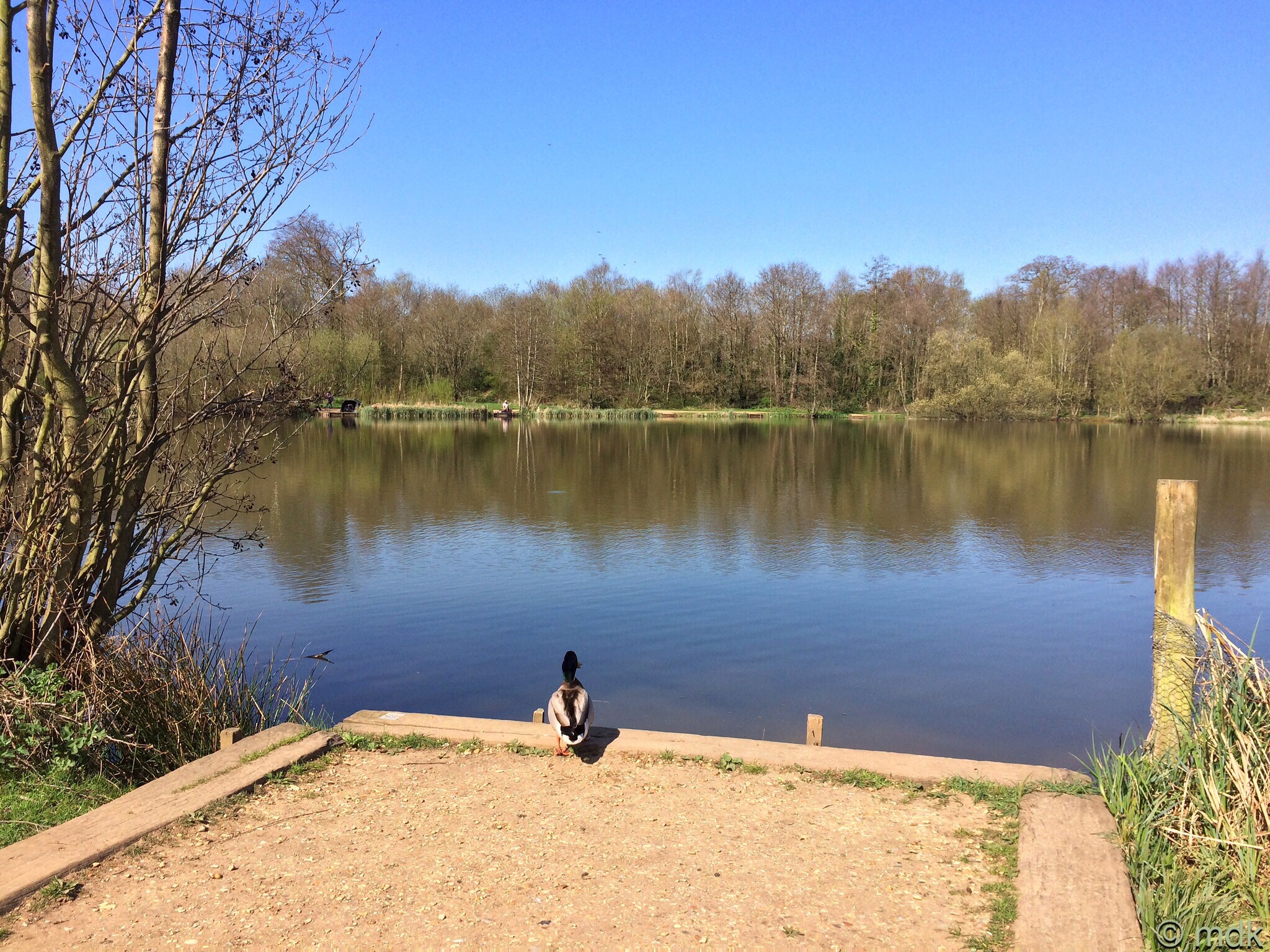 Not wishing to disturb the nesting swan, once I’d taken my photos, I quietly left and carried on along the bank of the lake. On the next viewing platform a duck was looking out at the water, the only other bird I’d seen at the lake. There were fishermen on the opposite bank. A little further on bluebells were growing at the water’s edge but there were no more birds or any sign of more nests. Seeing the swan’s nest had made me greedy for more. 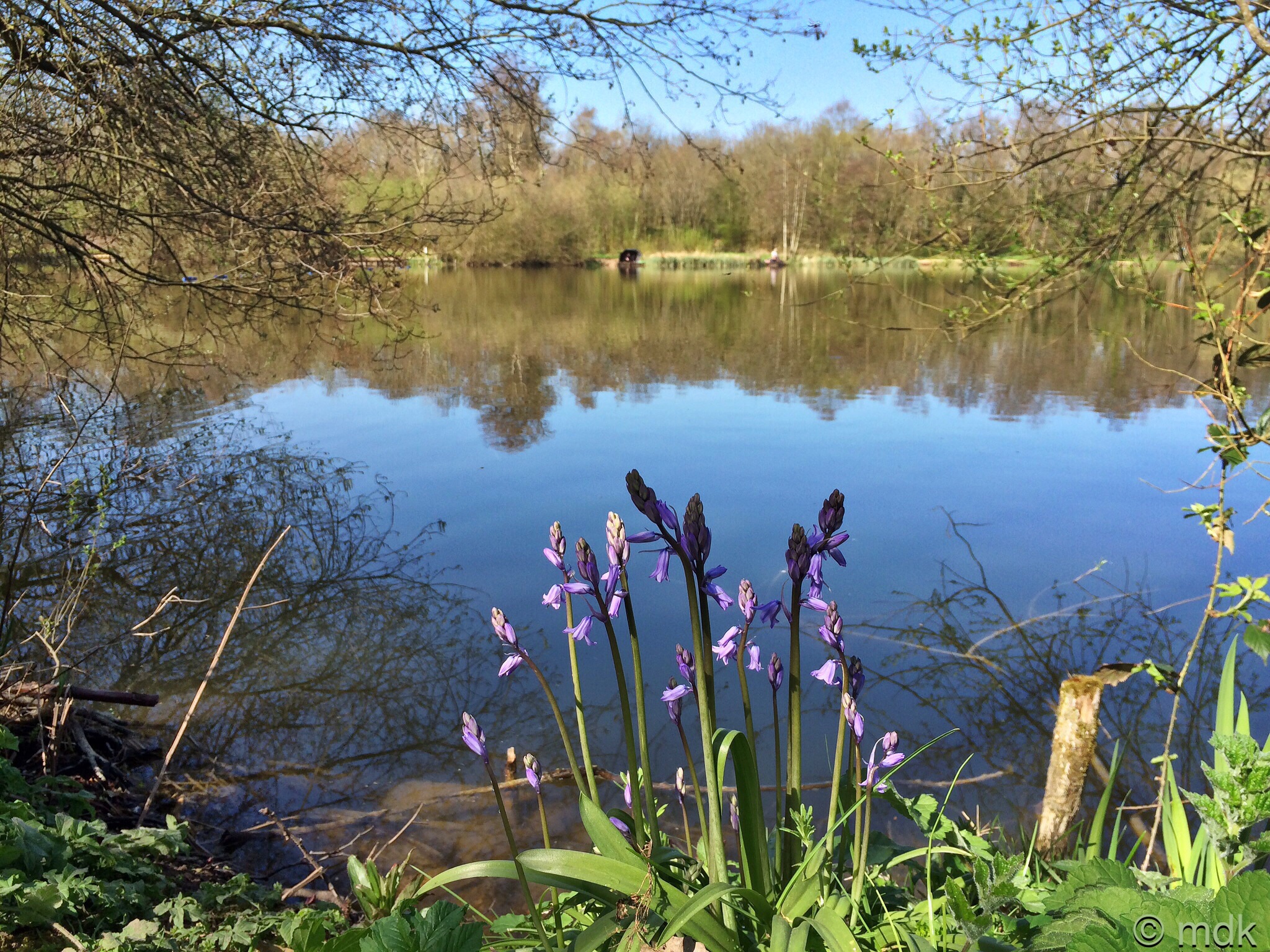 By the wooden bridge between the large fishing lake and the small lake fluffy catkins distracted me for a moment. The little lake felt like the most likely place to find more nests so I crossed the bridge and, passing the fishermen who’d set up a tent there, I slowly walked around the perimeter. A couple of ducks swam past, both male, and I wondered if the females were nesting somewhere on the island. 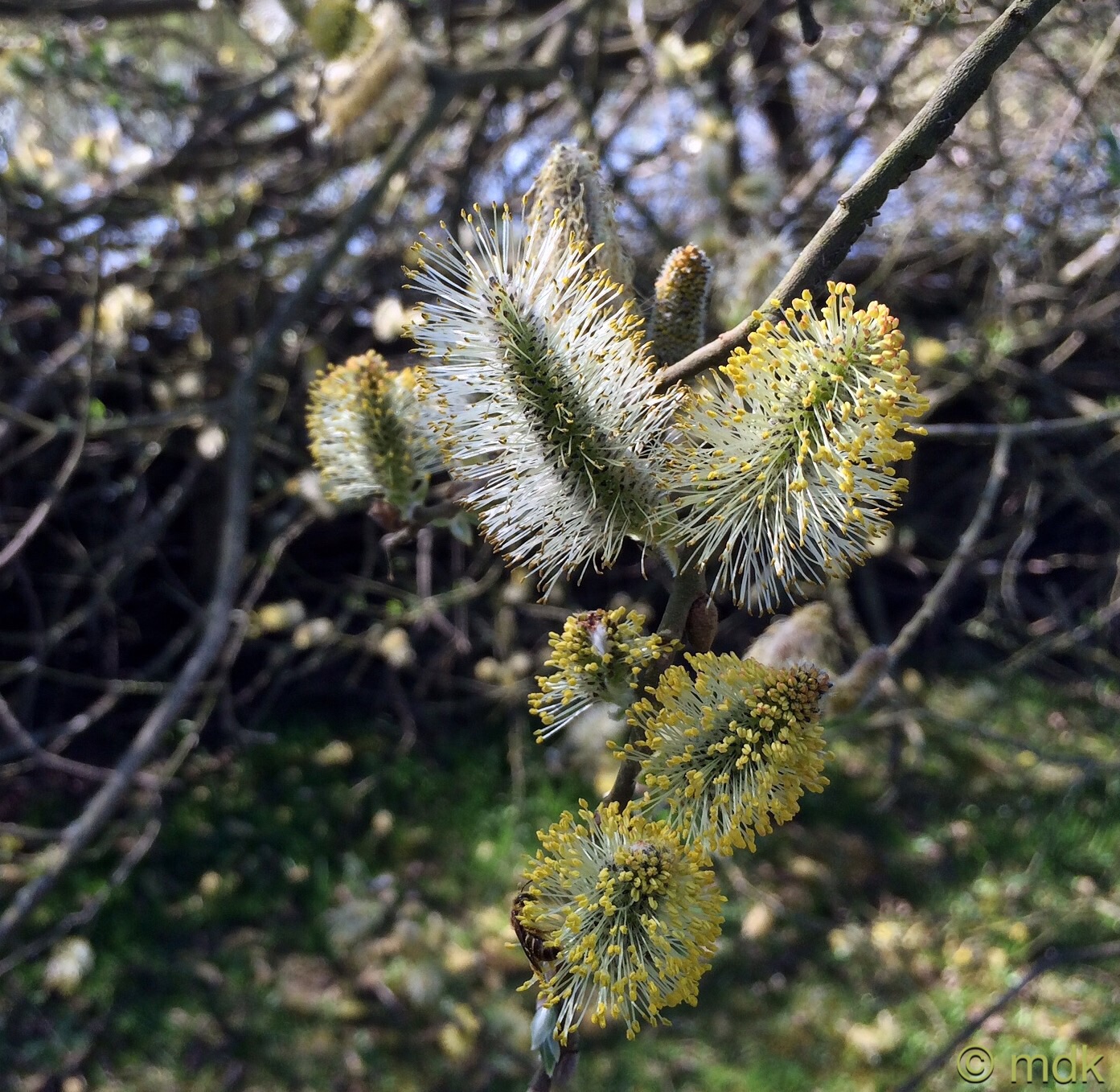 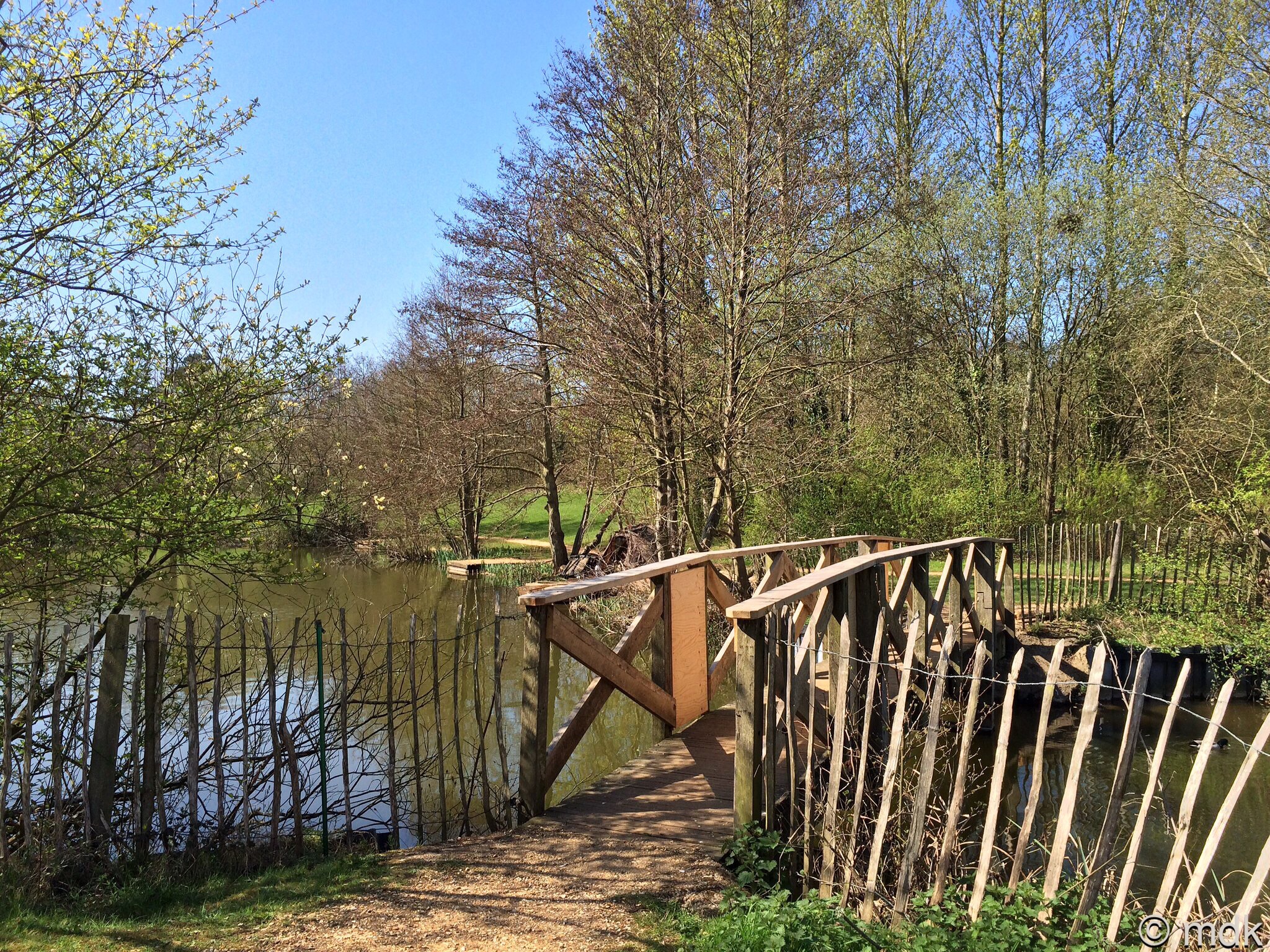 Usually there are birds galore on this part of the lake. They must have gone somewhere and my money was on the island. They were probably nesting away like mad in the peace and quiet. If only I had a boat… Then again, they’re probably best left alone to get on with it. With a little patience I might see the evidence later in the year with lots of fluffy ducklings and cygnets. As I worked my way around to the point where the island is closest to the bank I came upon another swan. From the thickness of its neck and the size of the knob on its bill I’m pretty sure it was a male. He was close to the bank and looked at me expectantly but swam away when he realised I had nothing for him. The beauty and elegance of swans never ceases to move me. Not far off was another of the fishermen’s platforms and a Canada goose standing watching the swan suspiciously. Slowly, so as not to frighten the goose away, I wandered over and sat on the bank behind it. Of all the water birds, Canada geese seem to be the least easily spooked and this one turned his back but stayed put. For a while I sat and watched quietly as both birds eyed each other and me. What was going through their heads? More to the point, what was going on on that island just behind them? The answers are anyones guess. 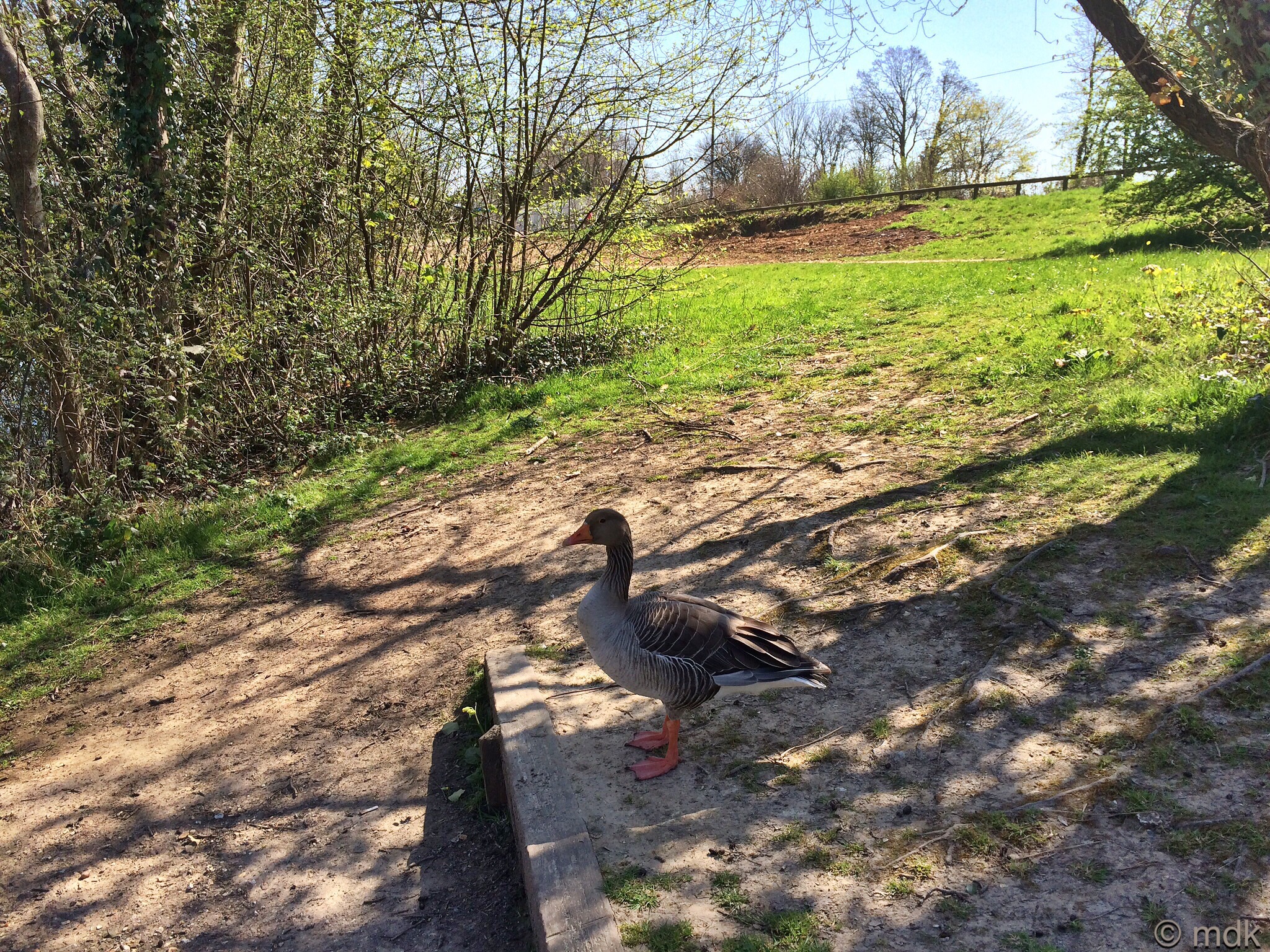 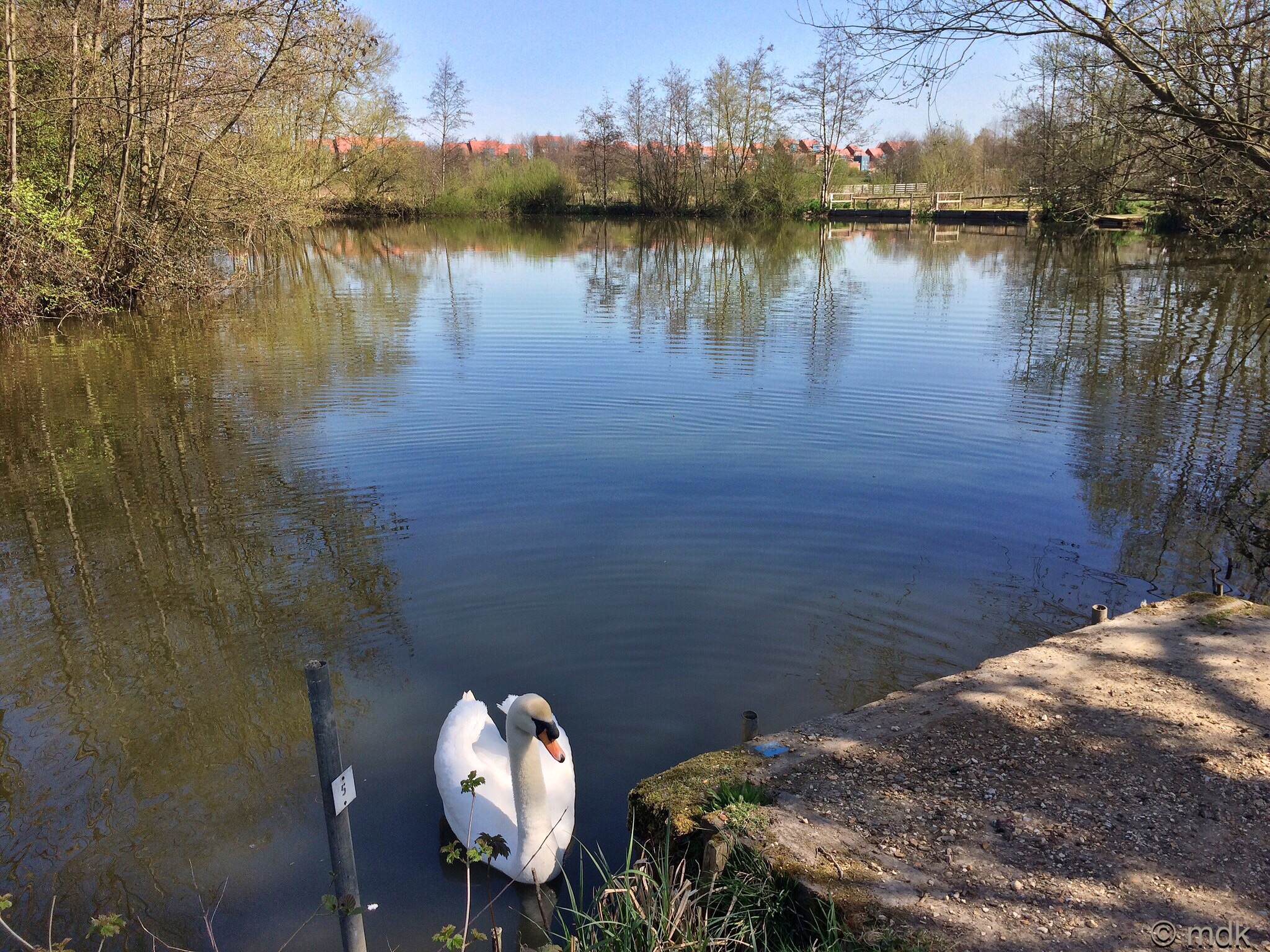 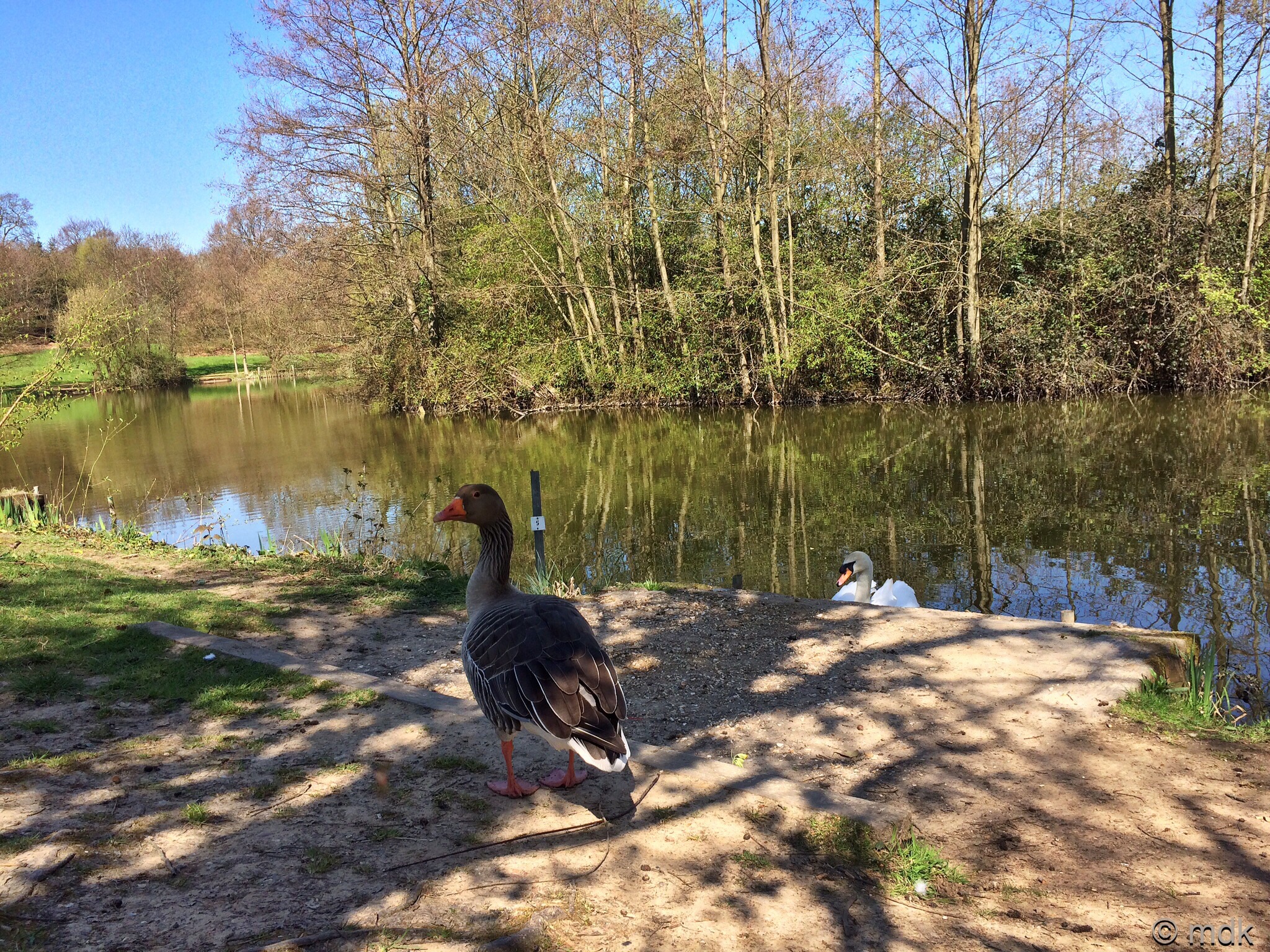 Once I’d drunk the chocolate milk from my rucksack I left the goose and swan to it and walked around the fishermen’s lake, just in case. There was a group of young children and parents sitting on a bench on the corner and, once I’d passed them, I saw several people wandering around with baskets full of small, colourful Easter eggs. Every so often they’d stop and hide an egg in the undergrowth or the low branch of a tree. Obviously there was an Easter egg hunt about to take place.

As I suspected, there were no more birds along this stretch of lake, just lots of fishermen intently watching the water. For a moment I thought about  going back for a second look at the swan’s nest but I figured I’d risked disturbing it enough so I carried on. Rather than go back the way I’d come though, I took the trail across the fields towards the railway track. Lakeside Country Park has a miniature steam railway and I thought I’d take a wander and see if I could see any trains. When I reached the steps to the track and the tiny level crossing there there were no trains about but I could hear one faintly in the distance so I sat at the top of the steps in the sun and waited. Before long the sound got louder and, finally, the little engine chugged into view. With a whistle and a few puffs of steam it slowly passed, along with the string of carriages it was pulling. A few of the younger passengers waved excitedly and I waved back. Maybe one of these days I’ll take a ride but I think I’ll have to borrow a child first to avoid feeling silly. 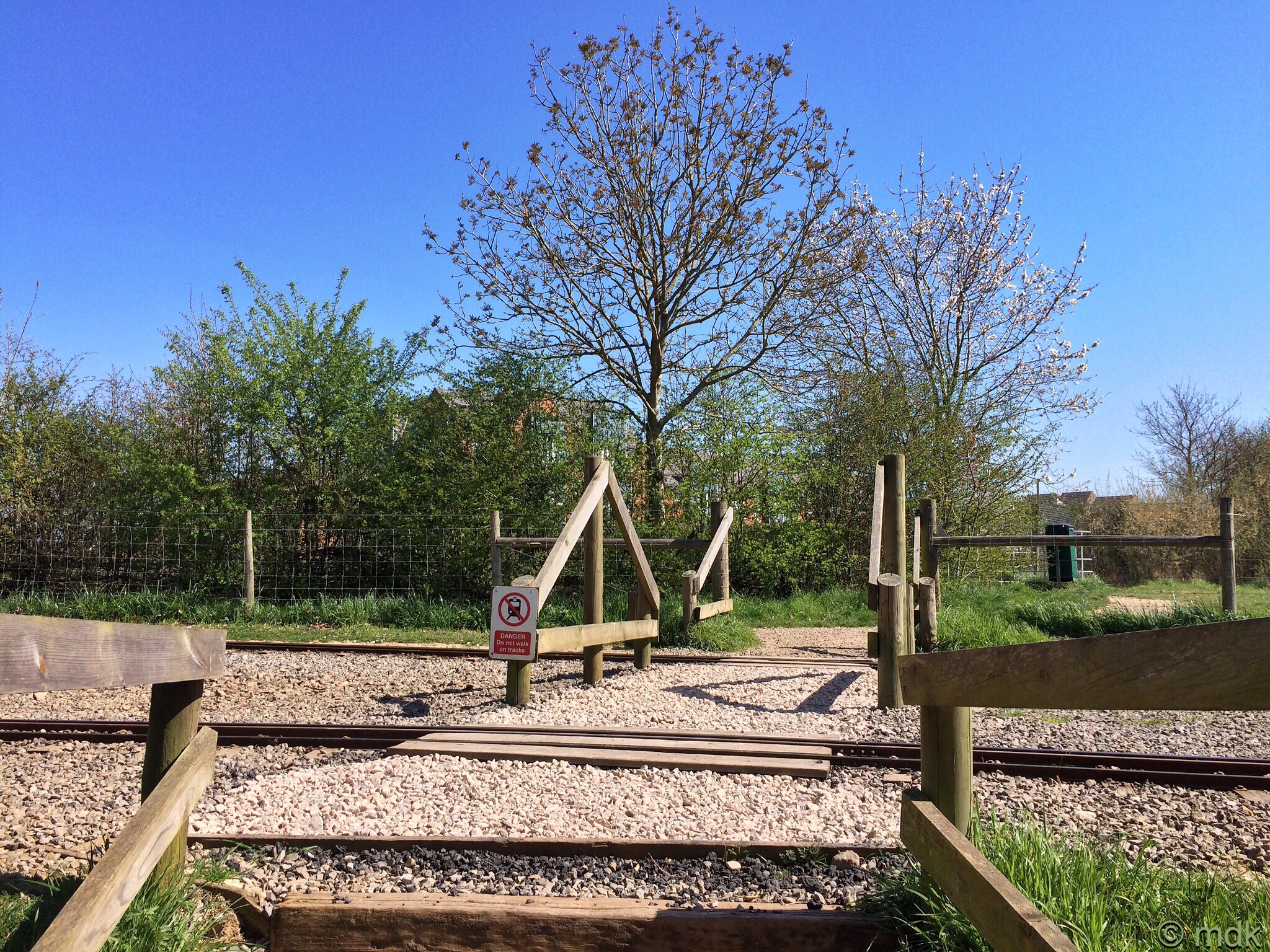 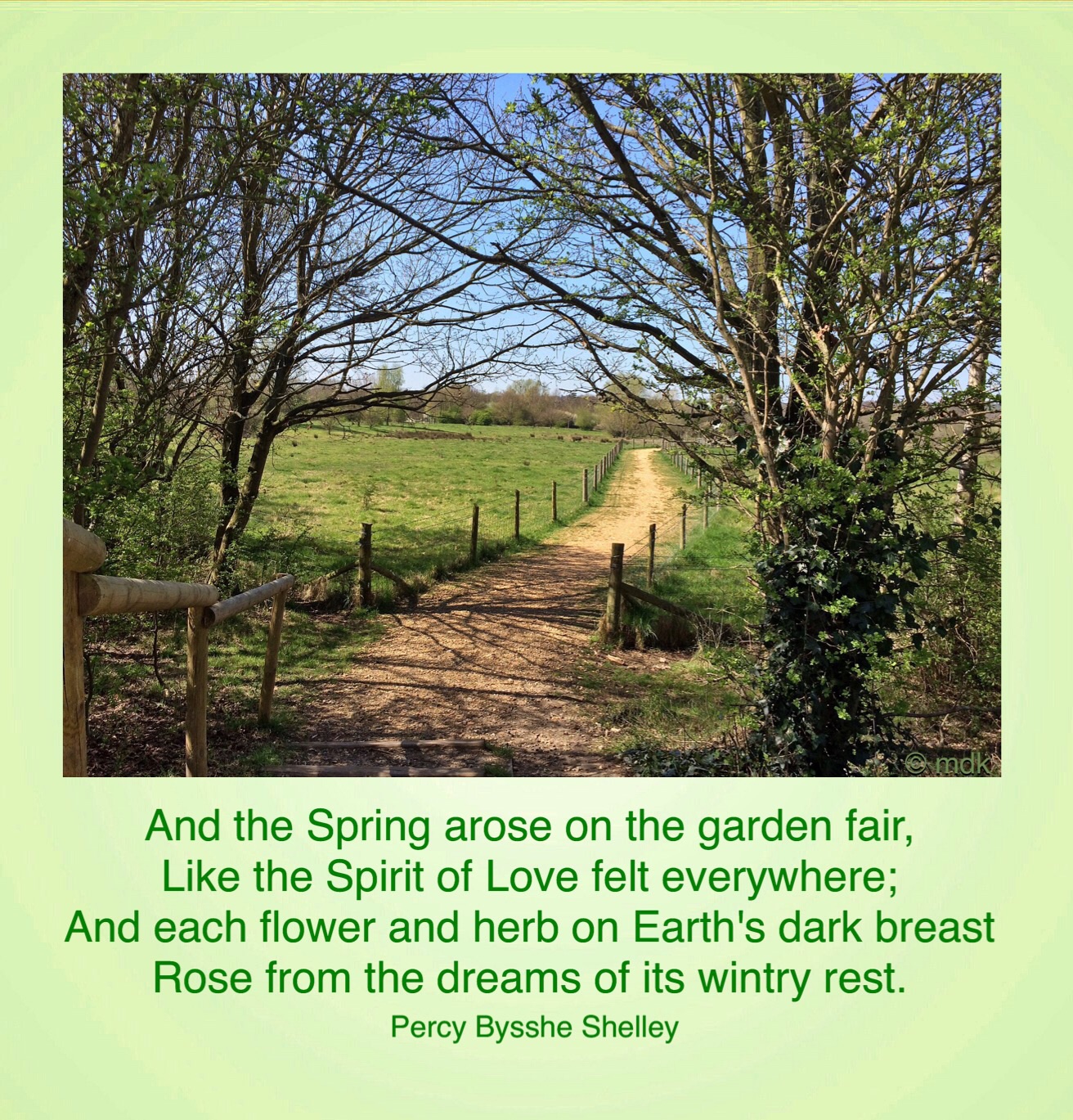 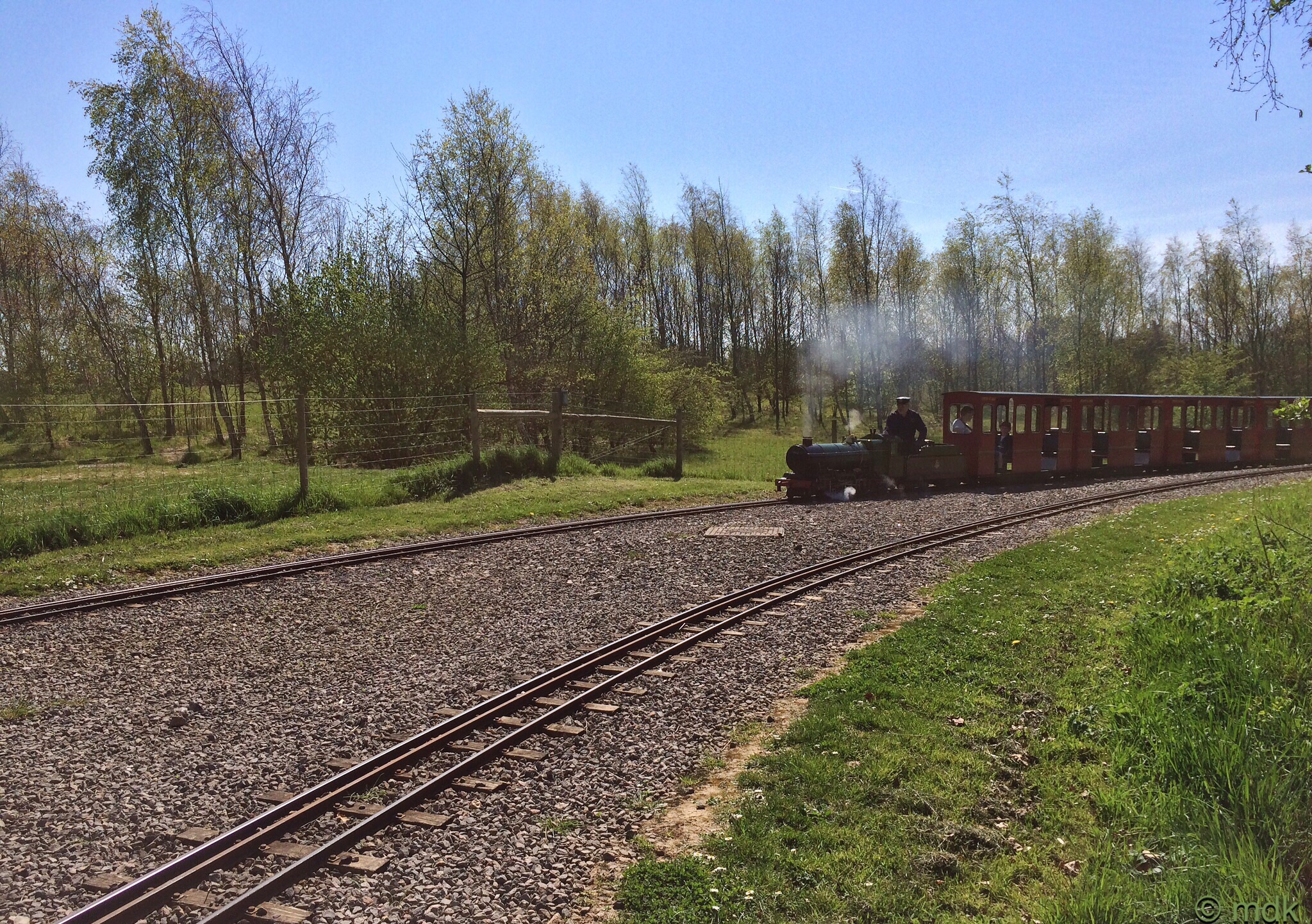 Once the train was gone I crossed the track with a careful look both ways to make sure no more trains were coming. They may be small but I’m pretty sure it would hurt to get run over by one after all. All in all it had been an eventful visit but it was time to make my way across the last field and back to the gate. By this time any chill there had been when I set off was long gone. The midday sun was warm. My parka came off and was tied around my waist. One of the perils of spring walks is having to dress for any eventuality and the need to strip off or put on layers over the course of a morning. The walk back towards Riverside was brightened by pretty honesty flowers in a garden and, before long, I was back at Monks Brook. There I spotted a purple splash of clandestina beside the brook, half hidden amongst the celandine leaves. These odd looking flowers, often called toothwort because of the fang like, hooded flowers, are actually parasites on the roots of alders, willows and hazels. They are certainly spoiled for choice along the banks of the brook and I saw several more clumps as I made my way back towards Mansbridge. At first Mansbridge seemed as devoid of birds as Lakeside but, at the first bend, I came upon some ducks. One poor beleaguered female was being hotly perused by a mass of over excited drakes. She was doing her best to evade them but they were pretty persistent. There was a lot of splashing and flapping and I felt rather sorry for the poor duck. A canoeist was lazily floating down river but the ducks didn’t seem to notice. Hopefully, when nature takes its course, all this frantic activity will mean some ducklings soon. 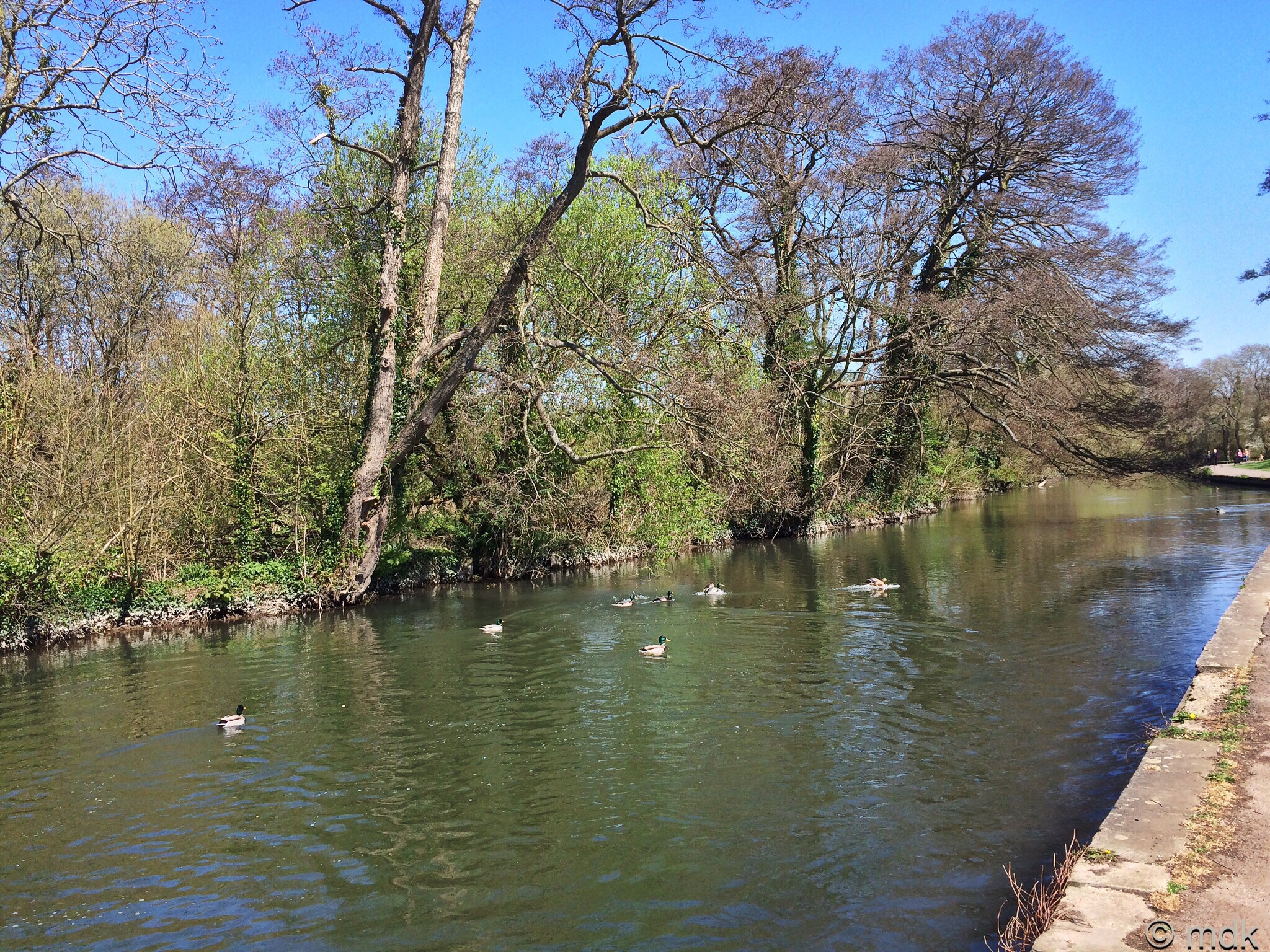 6 thoughts on “From lonely Lakeside to raucous Riverside”