Looking at the weather forecast and my diary, it was pretty certain Sunday was going to be the only day I’d have a chance to get out on a walk this weekend. Not good news for my May mileage but those are the breaks, I guess. The usual looking at maps followed and I thought I’d come up with a plan of sorts. For once it was one that hardly involved rivers of any kind.

Of course there was water and, for once, it wasn’t falling out of the sky. My chosen route took me along Spring Road to Millers Pond where I was surprised to see a heron sitting on the lily pads right in the middle. This is the first time I’ve seen a heron on the pond but he wasn’t accommodating enough to move any closer and my phone really wasn’t up to the job of capturing him, athough I did my best.

From the pond I set off along the path through Shoreburs Greenway, a three and a half mile ribbon of greenery running all the way from Weston Shore to the main Bursledon Road. A small stream runs through to the pond and, passing under the road, goes all the way to the shore but it doesn’t appear to have a name. Heading away from the shore through Botany Bay I saw a white horse grazing on the other side of the field. It seemed as if all the wildlife was determined to keep out of camera range.

Botany Bay is an area in Sholing, once a small hamlet and now the suburb of Southampton this trail runs through. The origin of the name Sholing is unclear but various explainations include the Old English for hill above the shore, the home of a person named Scēolh (meaning squint eyed), or it may come from the Romany ling, meaning heather. Certainly this was once heathland. Others say it comes from the ancient Sceolingas tribe who lived somewhere in this part of Hampshire.

Locally Sholing is known as Spike Island. Some say this is due to the spiky gorse that can be seen everywhere, others believe it refers to the spikes used to secure convicts awaiting transport to Australia. The first cottages appeared in the 1790’s built by Romany families who spent the winter in these houses but kept their caravans in the garden to use for hop and fruit picking in the summer. The gypsies formed a tight knit community and, in the area around Botany Bay, there are still many traveller familes living in static caravans. The horse probably belongs to them. Maybe one day I’ll walk along there and take some pictures.

After the rain we’ve had I wasn’t entirely sure if the path on the other side of Botany Bay Road would be walkable. As it turned out, apart from a little mud in places it wasn’t too bad. Someone had obviously walked this way recently because I spotted a wildflower chain hanging from one of the trees. The buttercups have taken over from the ragwort in providing splashes of yellow along the trail. Tiny bugs seemed to be attracted by the shining yellow petals but I’m not sure what they were. 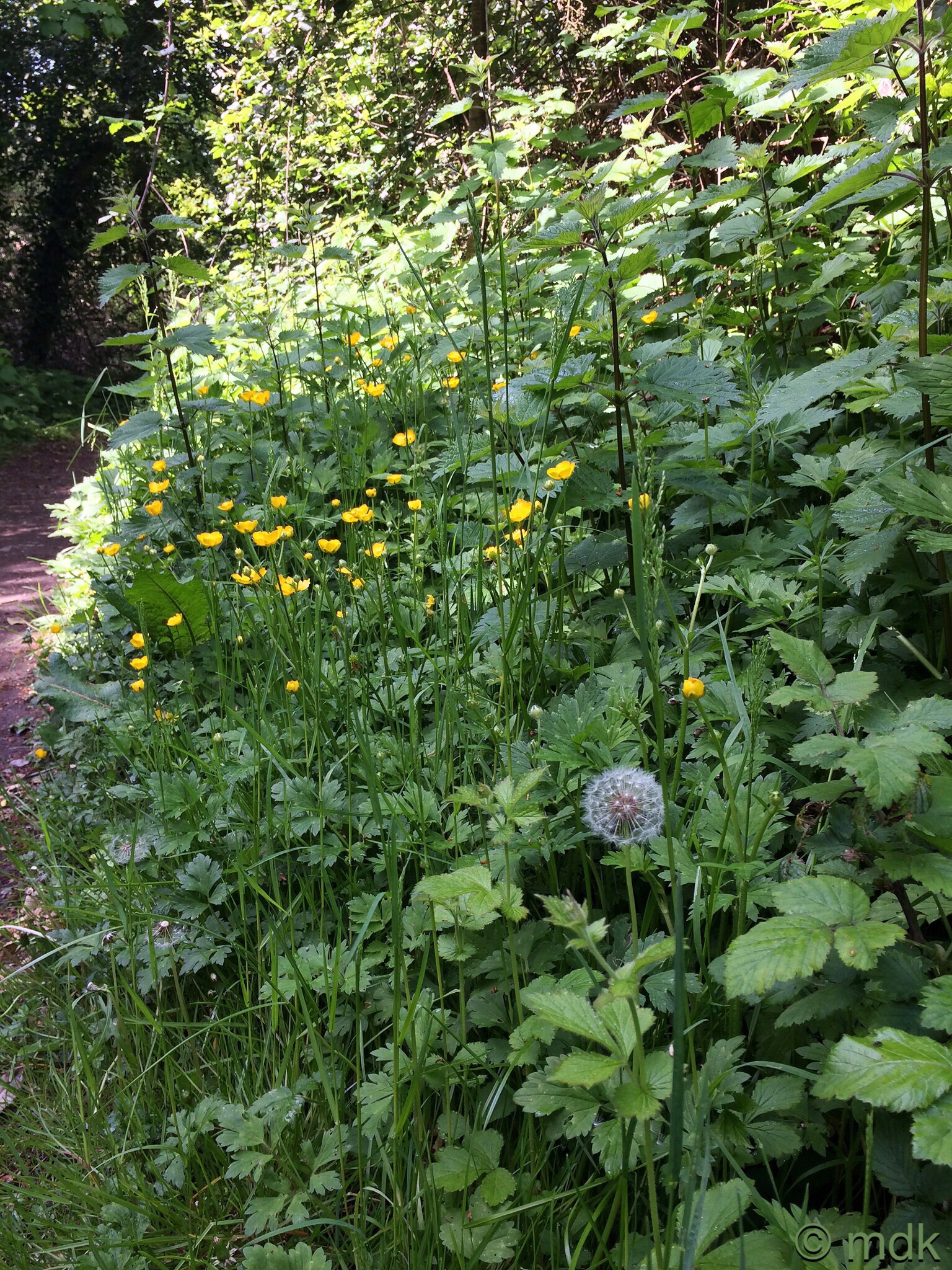 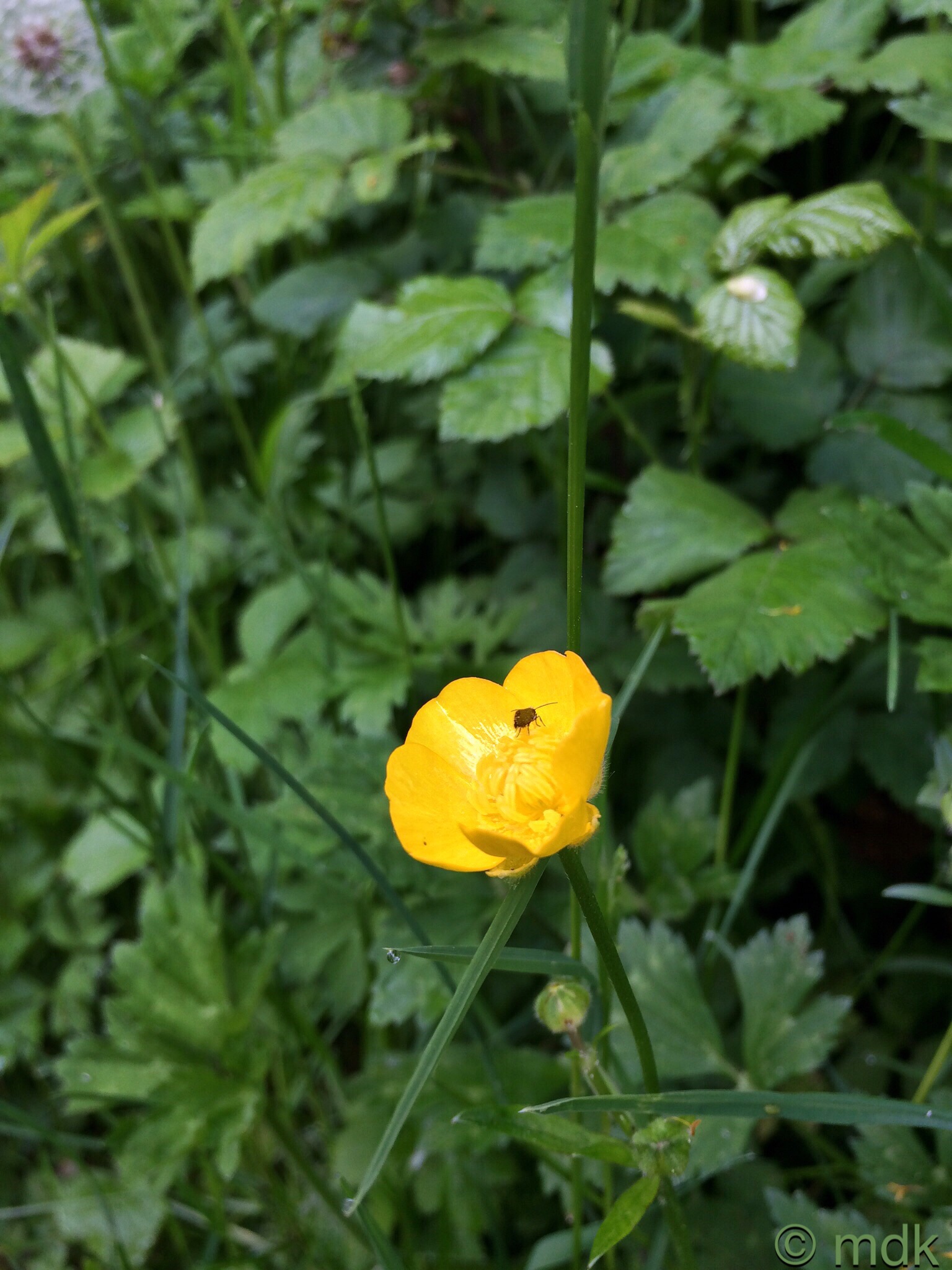 A little way way along I acquired a companion in the form of a chocolate Labrador who burst out of the undergrowth beside me and followed me for a while. Not long after he was joined by a black Labrador. Neither had collars and no owner appeared. Perhaps they had escaped from one of the gardens in Botany Bay Road or belong to one of the traveller familes and are allowed to run wild. Either way they seemed friendly enough and, after a while, got bored of following me and disappeared again. 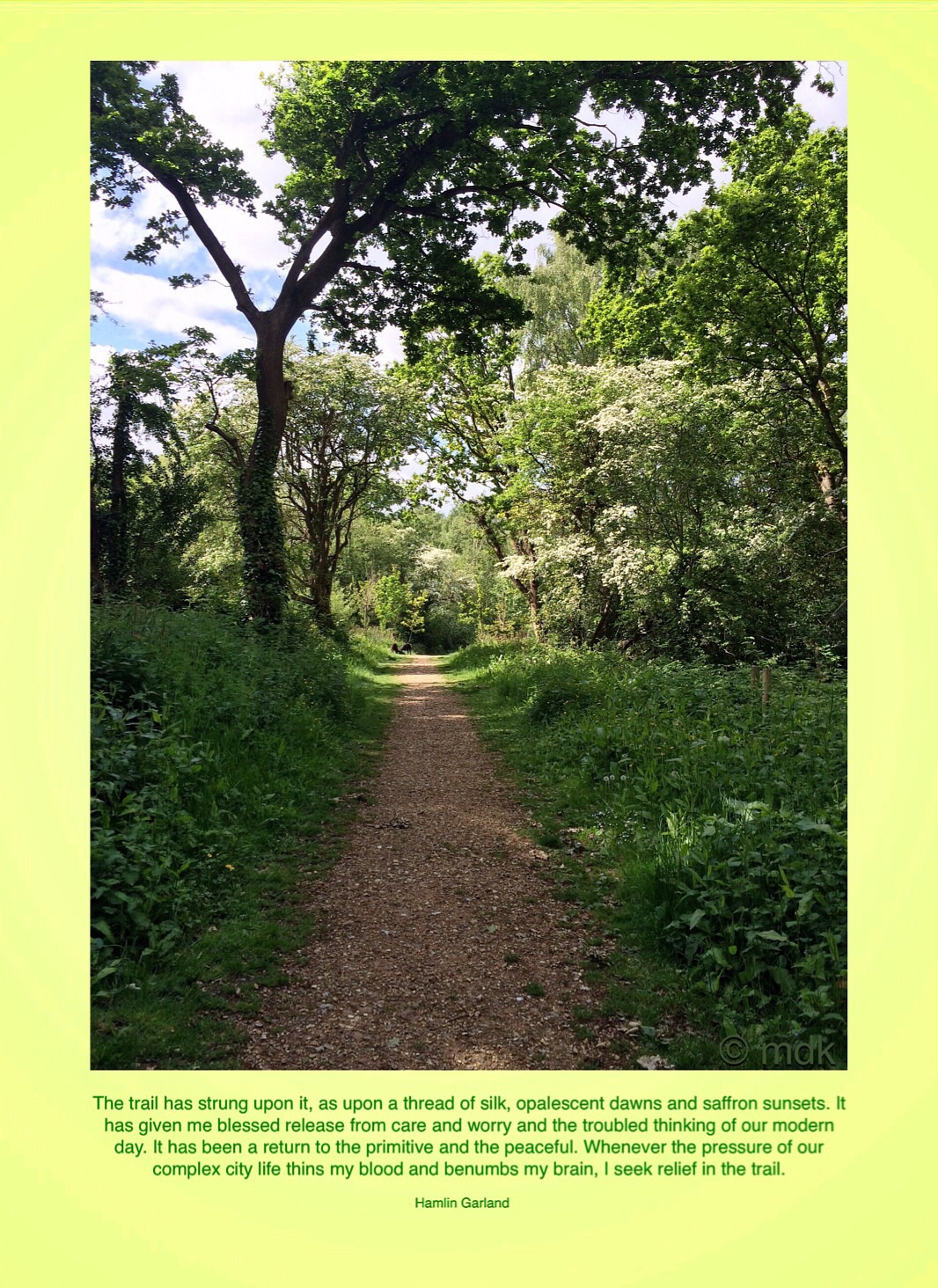 Before long I came to the road at Bunny Hill where I crossed onto the second segment of the trail. For a while the dominant wild flowers were squills and the odd cranesbill. Through the trees to my left, in a deep gully, I caught glimpses of the stream that had been hidden completely on the first section of the trail. Lots of small side paths run off to the various streets beside the greenway here and I came upon a couple of dog walkers who said good morning as they crossed my path.

There are some interesting, organic looking wood sculptures on this section of the path. Quite what they mean or who put them there is a mystery but they always make me smile. One looks a little like a mushroom peeping out from the grass at the edge of the trail and another is a kind of totem pole carved with odd shapes that could represent woodlice. The path divides here, one branch going down the steep slope to the stream and the other staying on the high ground. At the bottom there are more carvings, like giant woodlice but, as it was boggy at the bottom, I could only admire them from a distance. 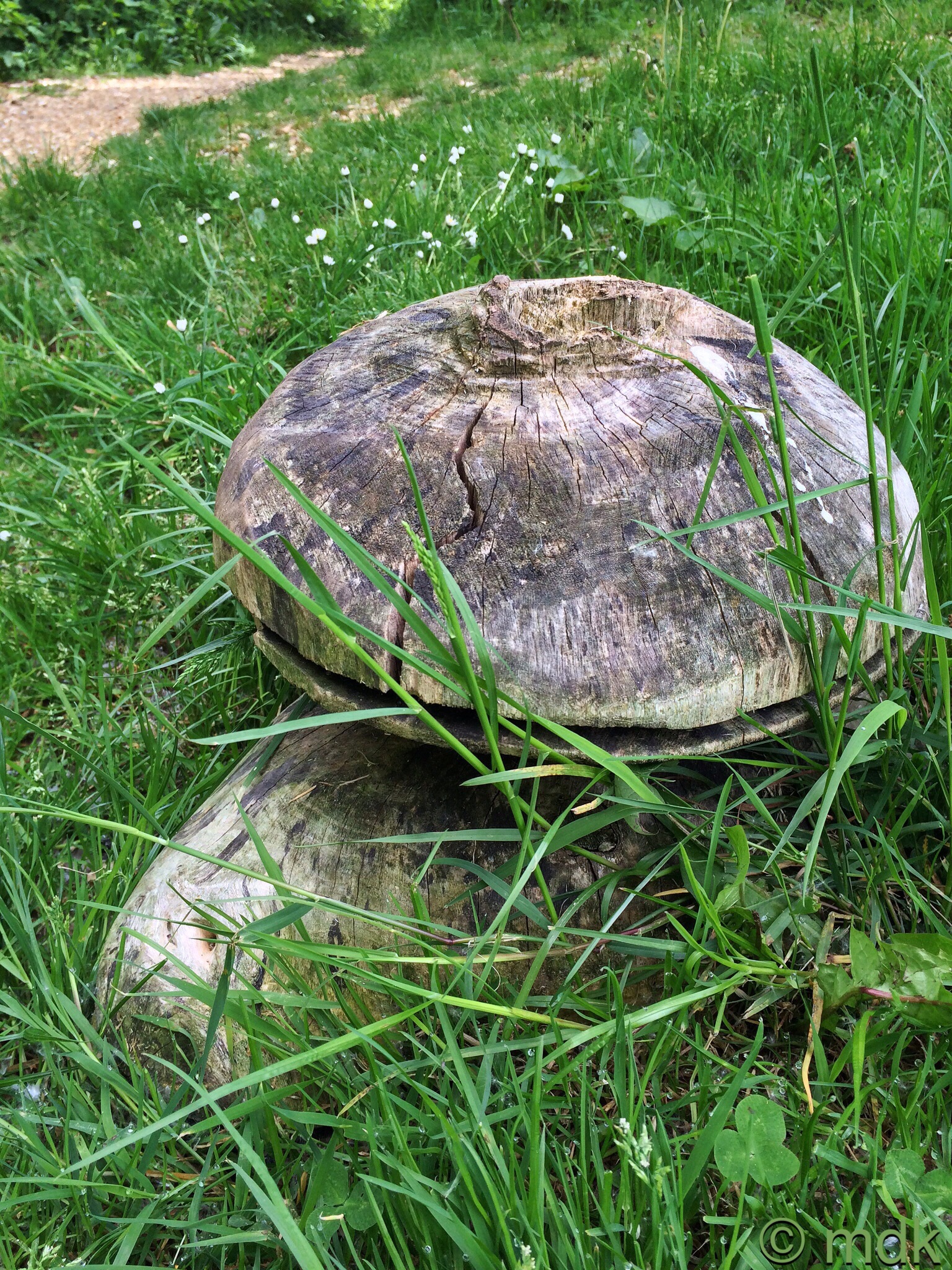 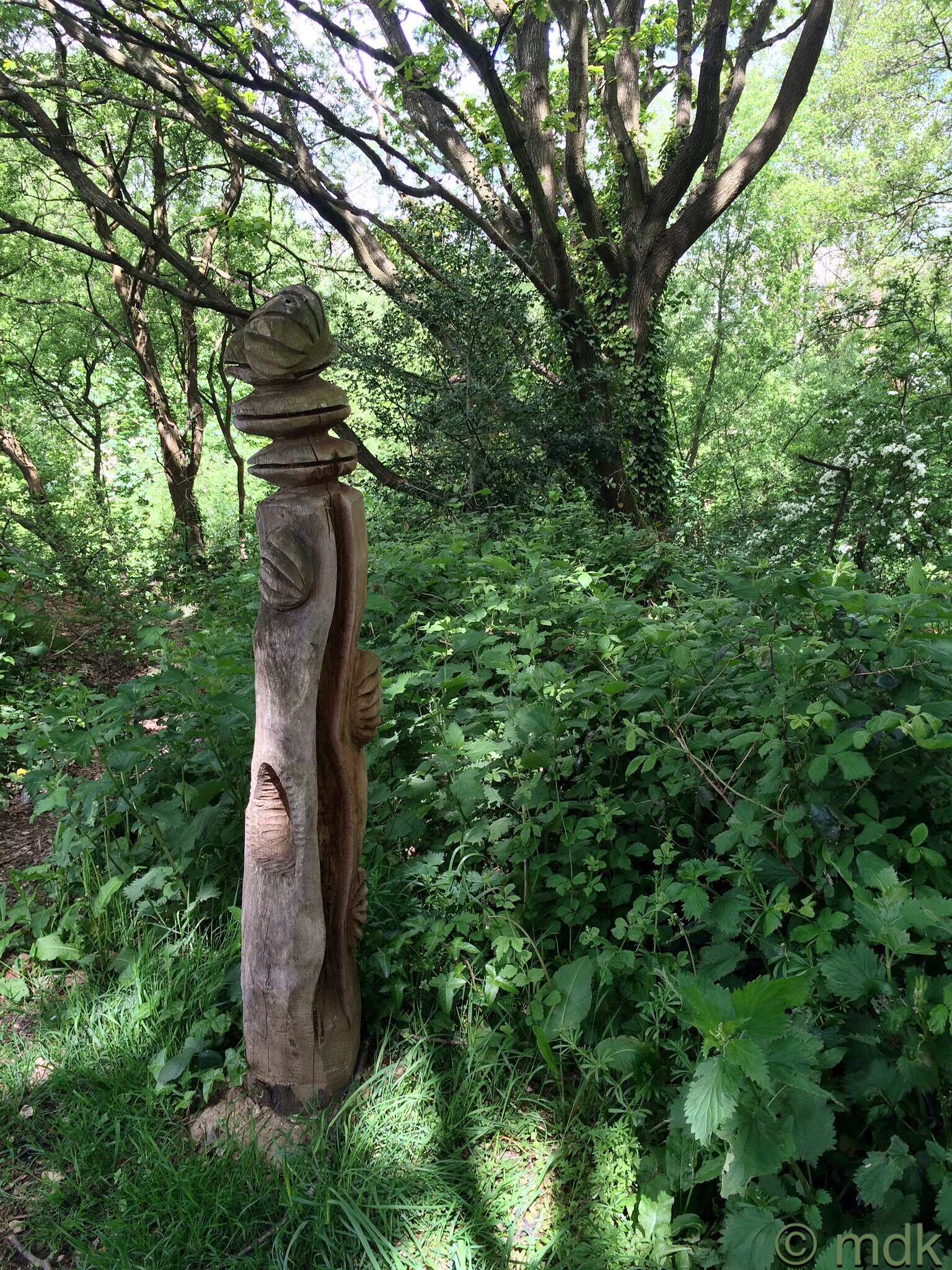 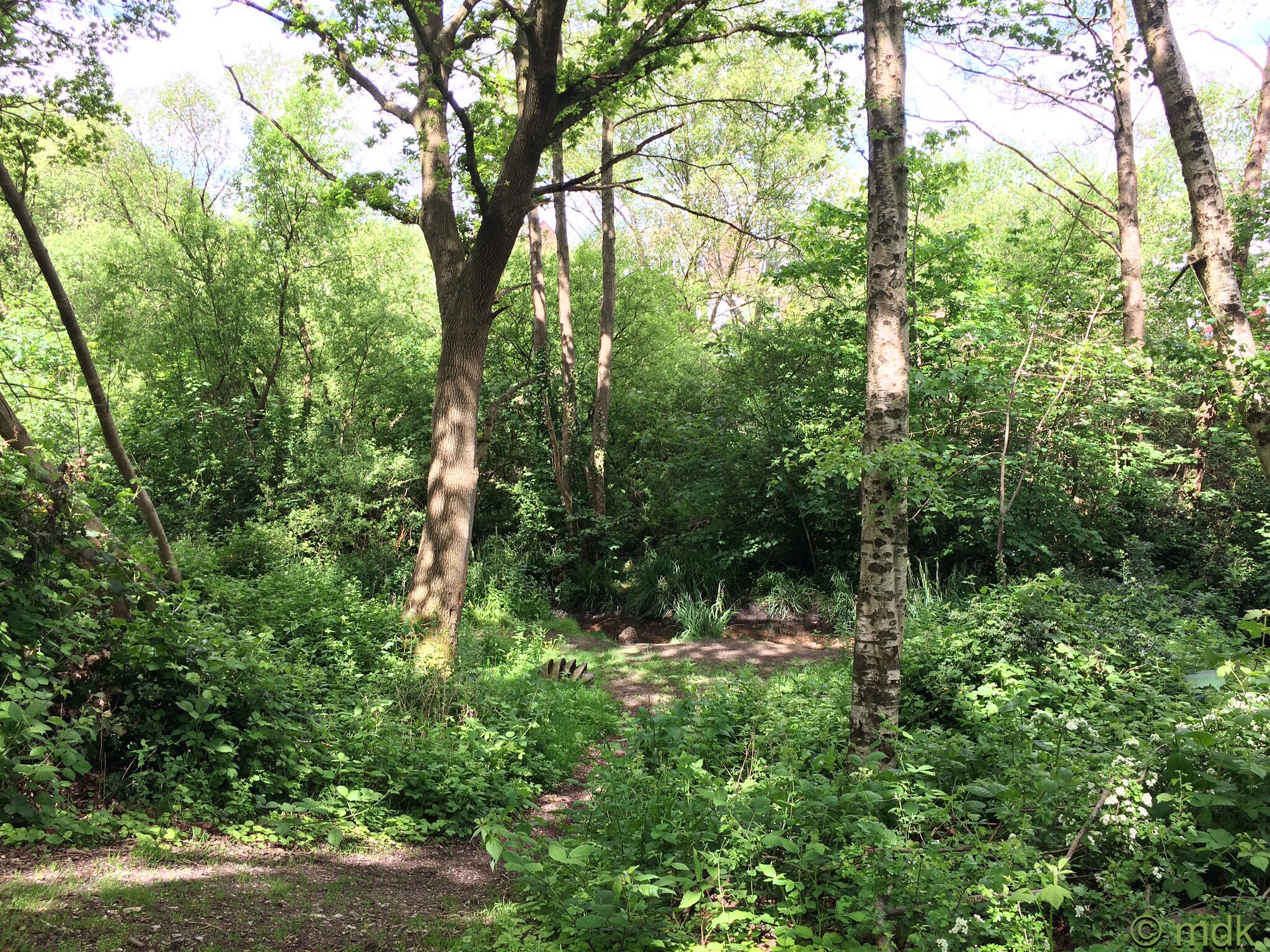 The two paths join again by a grassy bank sloping up towards the streets off Butts Road. It was a carpet of buttercups shining in the sun. Now the small stream, hardly more than a trickle at the moment and bordered by clumps of squills, is visible from the main path and more little bridges cross to the houses in the streets behind Kathleen Road. These two busy thoroughfares and the maze of streets going off them border the path for the rest of its journey to Bursledon Road. 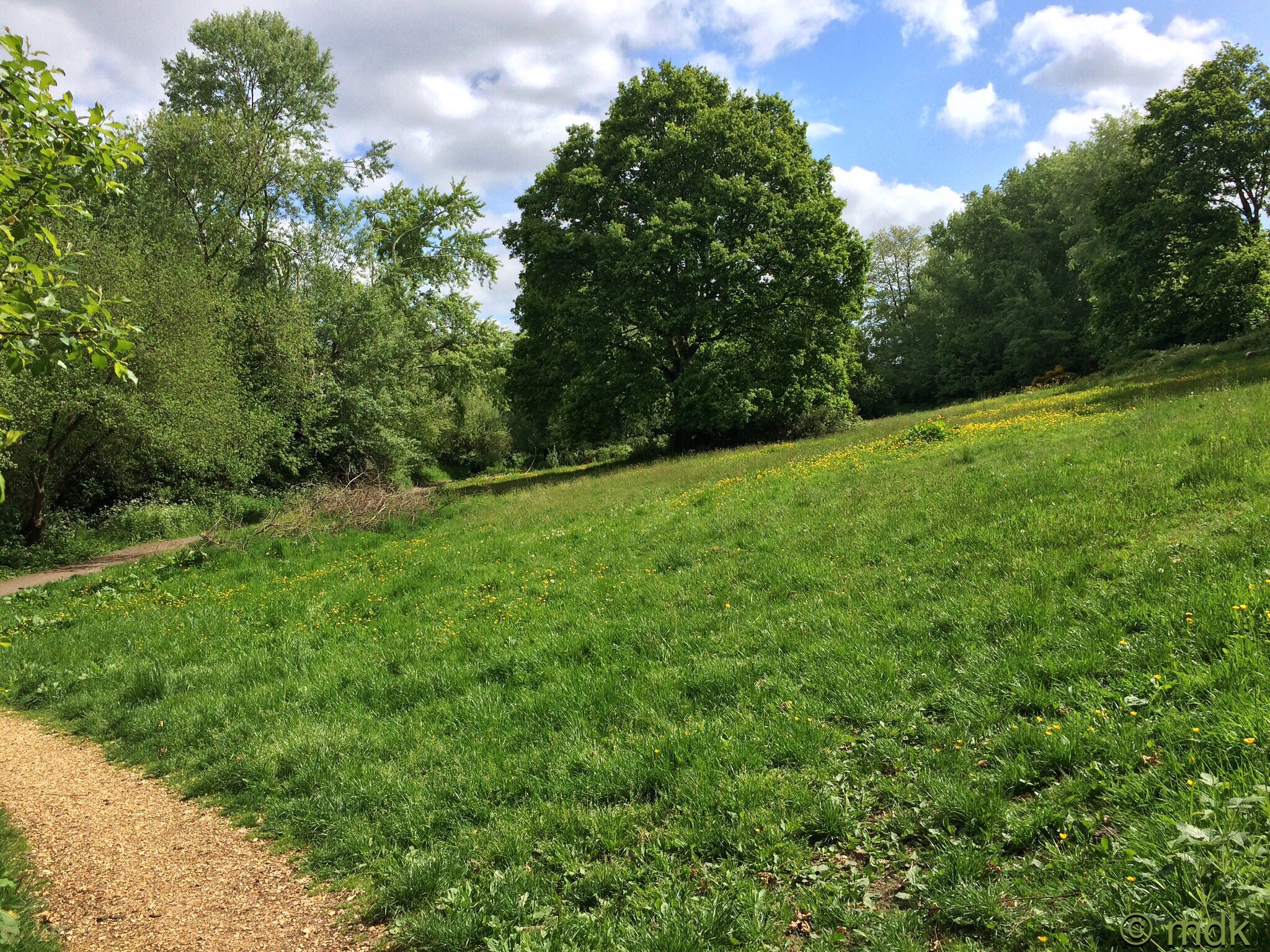 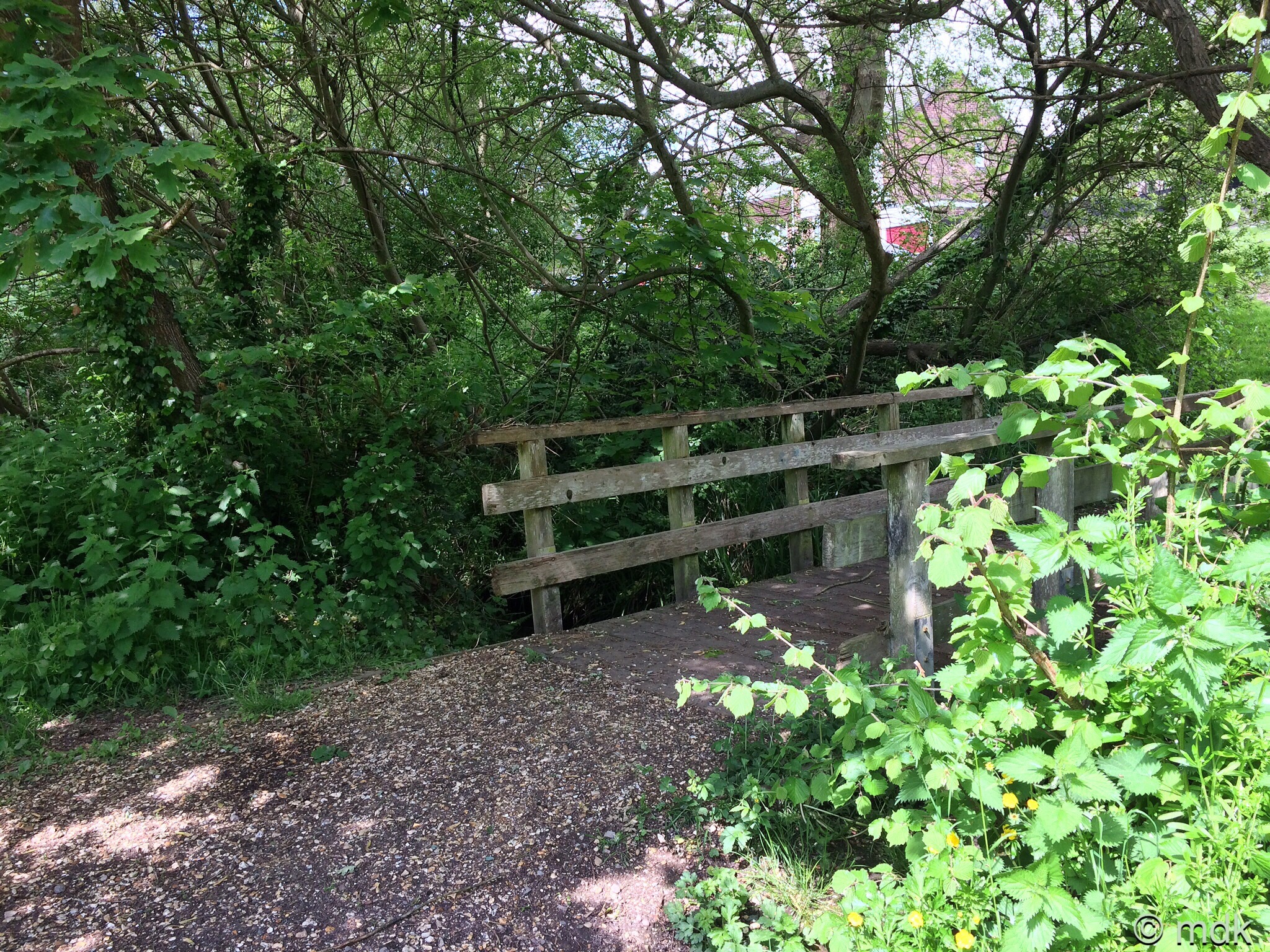 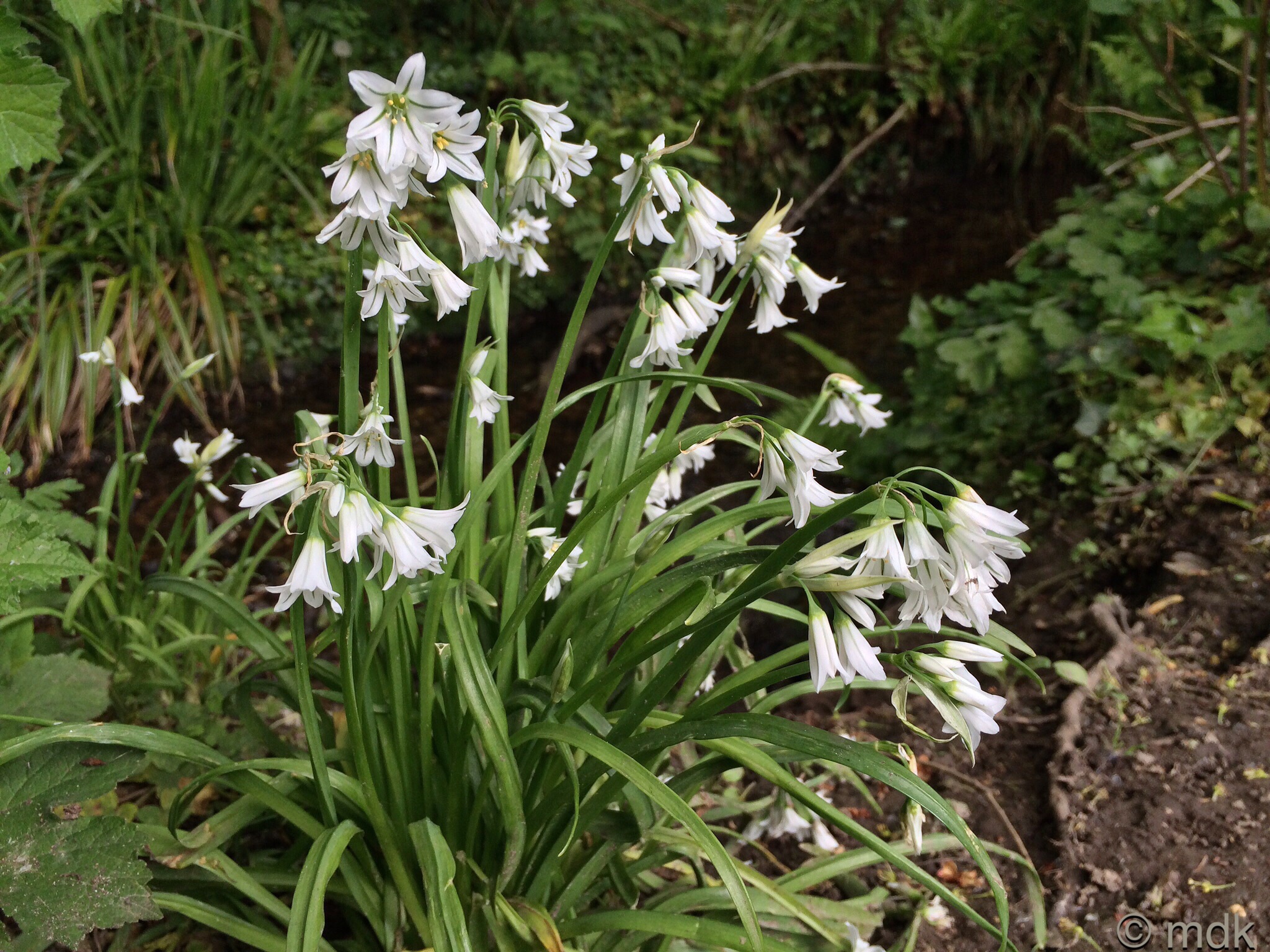 Just before the path disappears into the trees again there’s a huge fallen tree that has been a bit of a fungus magnet in the past. One end was absolutely covered with old dried out horse’s hoof fungi, also called tinder fungus. A spongy, flammable layer inside these hoof shaped fungi, called amadou was prepared and used as tinder by ancient people, allowing them to start fires easily and quickly by catching sparks from flint struck against iron pyrites. Quite how the first cave dweller worked this out is a mystery but this dead tree would have been a valuable resource back then. 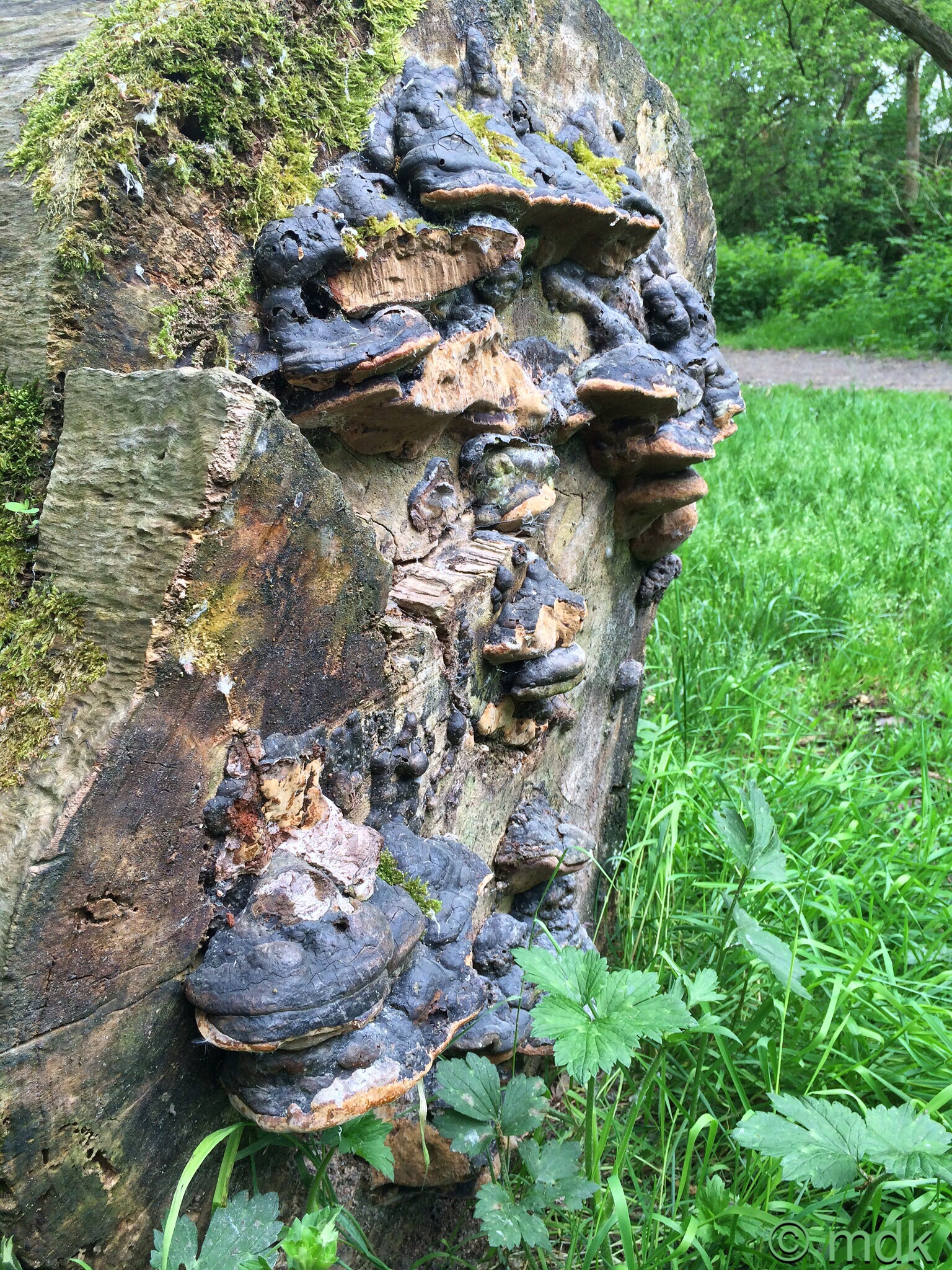 Around the side of the massive log a miniature forest of little brown mushrooms was growing. There are so many different types of little brown mushroom, all looking very similar, I’m not even going to try to work out which these were. They were crowded together on the top of the log like clamshells on the shore. On the ground below spores must have spilled and flourished as it was a hotchpotch of more mushrooms, these open widely. 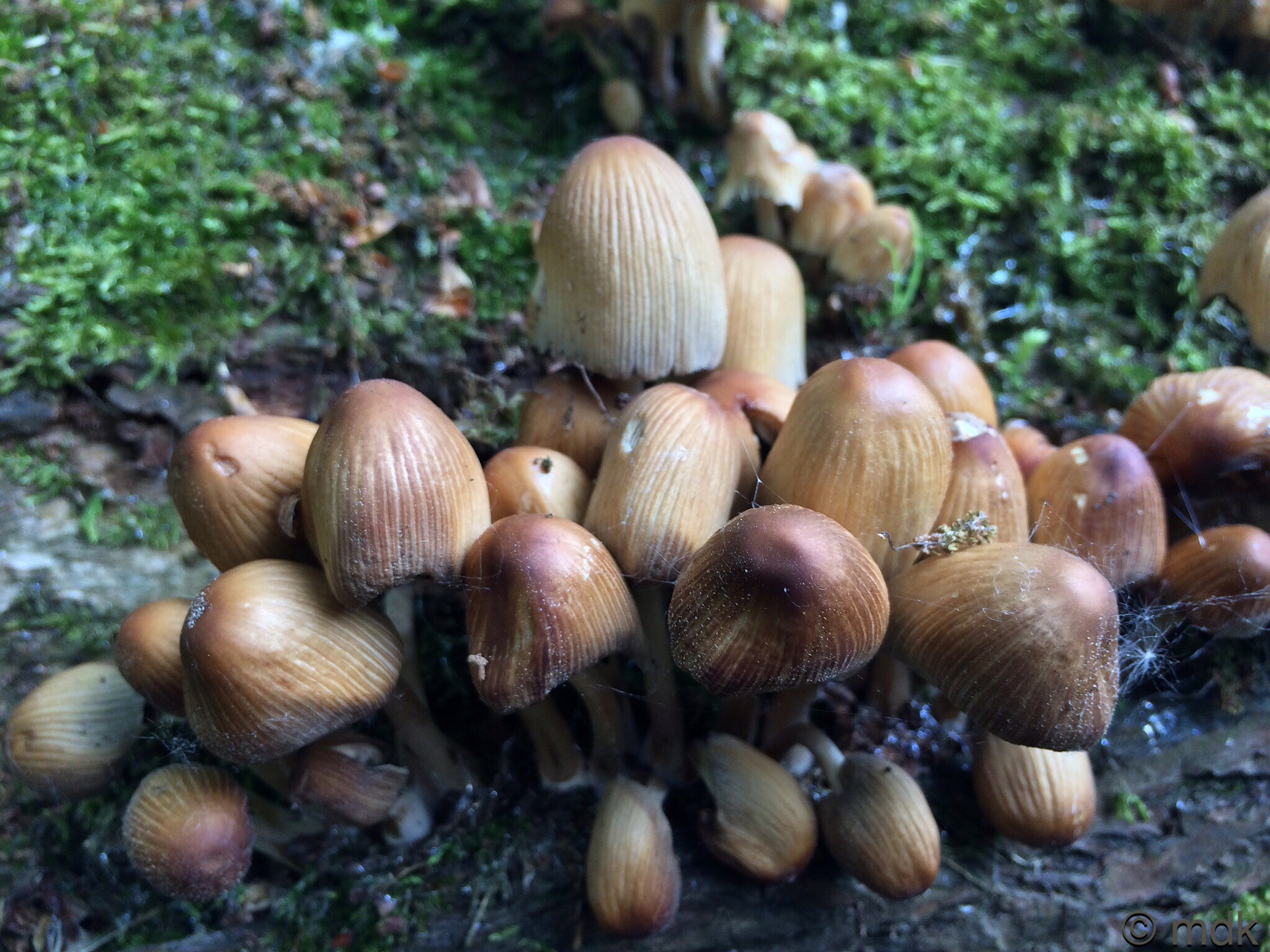 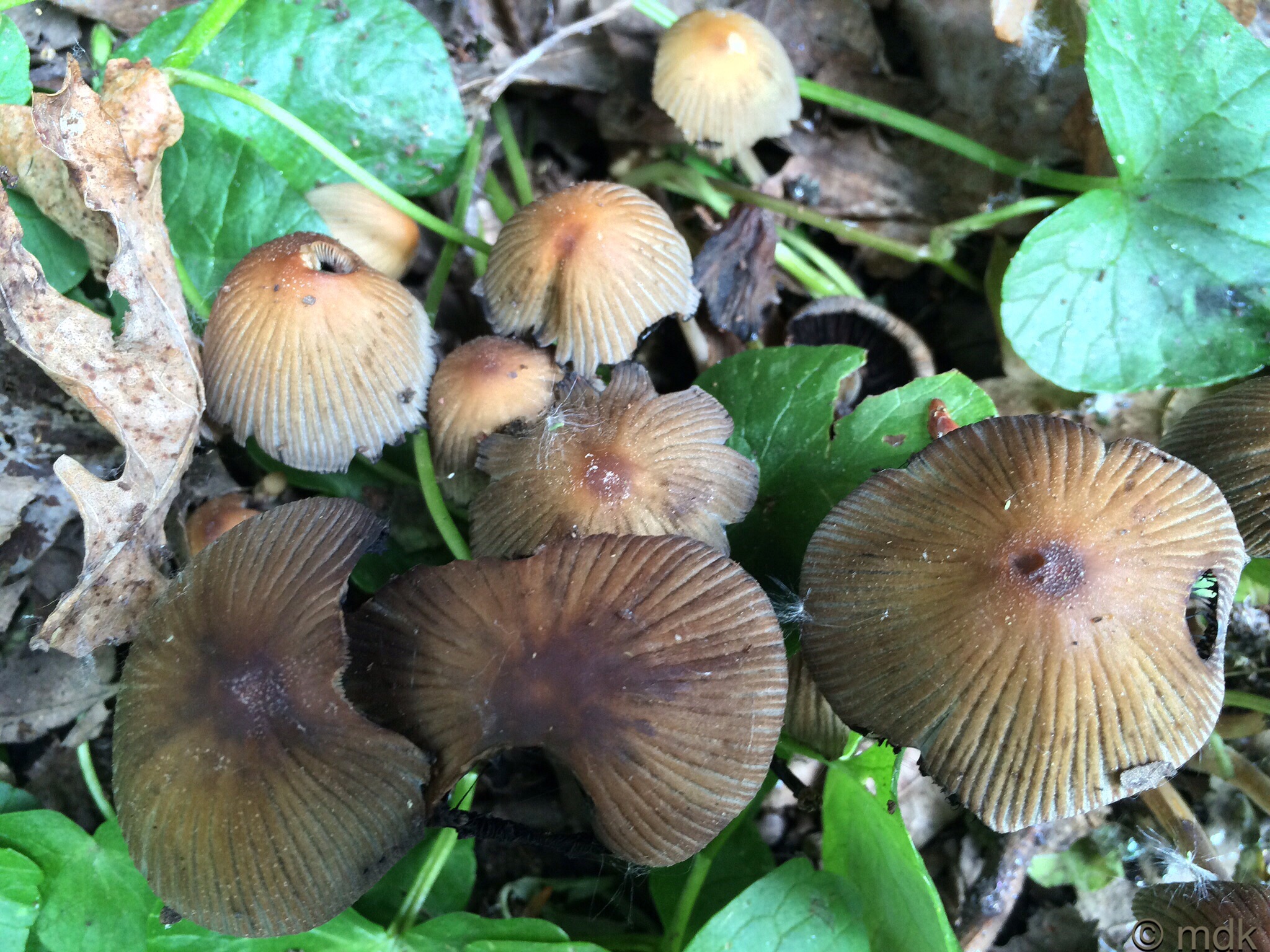 A dandelion seedhead looked like it would make a nice photo against the backdrop of mushrooms and, as I was kneeling trying to find the best vantage point, I saw a man walking two tiny dogs watching me quizically. He was probably wondering what I was up to or thinking I was some kind of mad woman. For some reason I get that a lot. 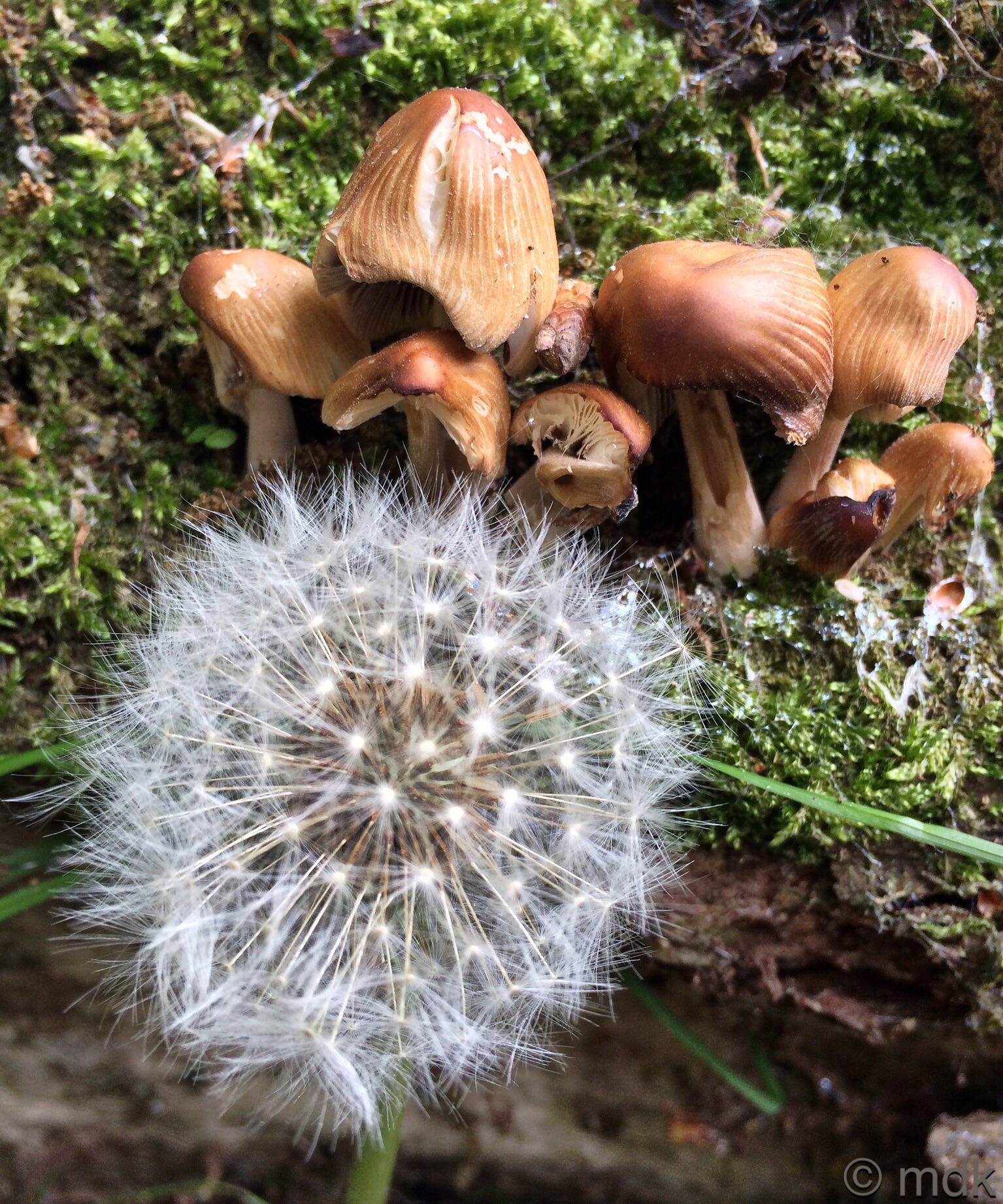 For a while the path disappears into the trees again then emerges close to a small playground and a wider expanse of grass with benches. Here I spotted borage growing at the edge of the tree line and stopped again. Borage is a medicinal herb, traditionally used for gastrointestinal, cardiovascular, urinary and pulmonary ailments. It is also used in cooking and has a cucumber like taste. While the leaves can be added to salads, the flowers with their sweet honey taste make a pretty garnish and are traditionally used in Pimms cocktails. They are one of the few truly blue edible substances. The flowers look a little like nightshade but grow on hairy stems shyly facing the ground. 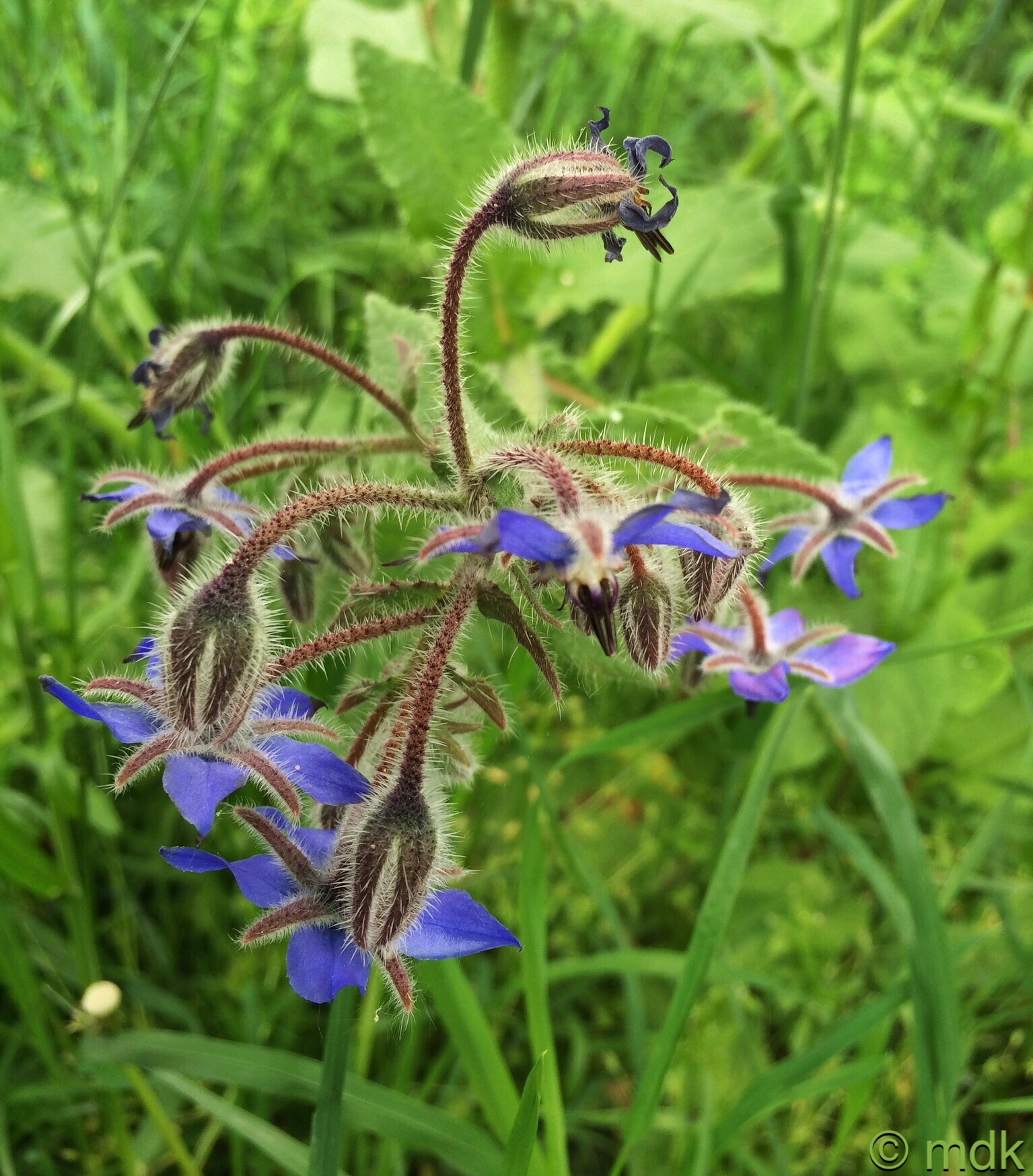 As I straightened up the man with the little dogs came past.
“If you’re interested in fungi, there’s some really great ones a little further on. They’re the brightest colour I’ve ever seen,” he said. “I’ll show you where there are if you like.”
Trying not to trip over the long leads of the little dogs who were yapping, quarrelling and seemed intent on wrapping around my legs, I followed him along the trail. It did occur to me that following strange men in the woods when they’ve offered to show you something interesting was just the sort of thing my mother warned me about. There were several people in sight in the playground though and I knew where all the side paths were if I needed to make a quick escape. Even so I kept well behind him and promised myself I’d make an excuse and leave if he started to lead me into the trees.

He turned out to be genuine and, as we walked he told me he often followed the trail with his camera taking pictures of fungi and flowers. As we reached the trees on the edge of the clearing I realised I already knew about the fungus in question. It seemed like it would be rude to let him know this though so, when we came to it, I thanked him nicely and pretended to be thrilled. Actually I didn’t have to pretend much because this is truly a spectacular fungus, probably the most colourful I’ve ever seen. Once I’d thanked him, my new friend and his little dogs left me to get on with the business of taking photos. 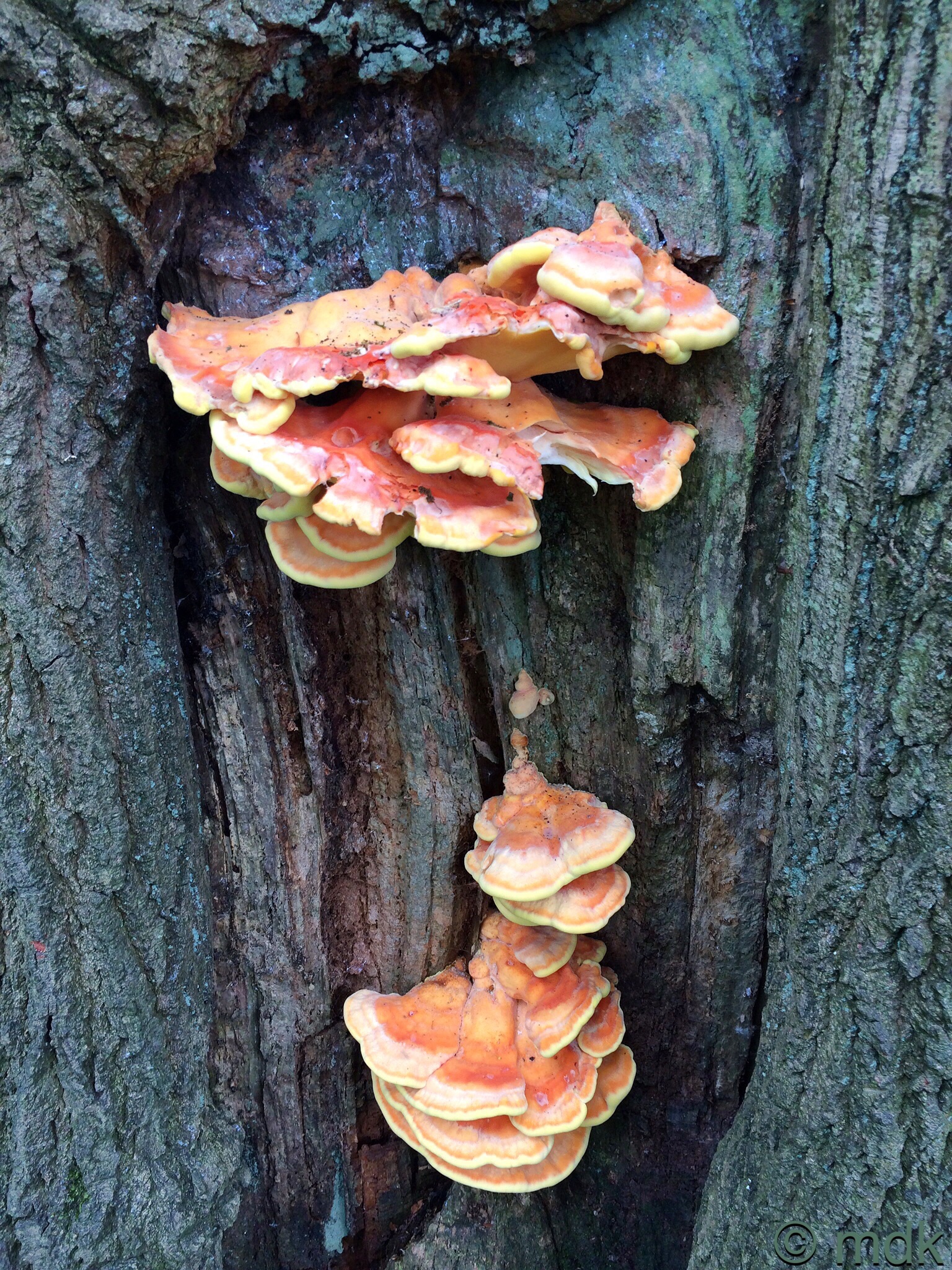 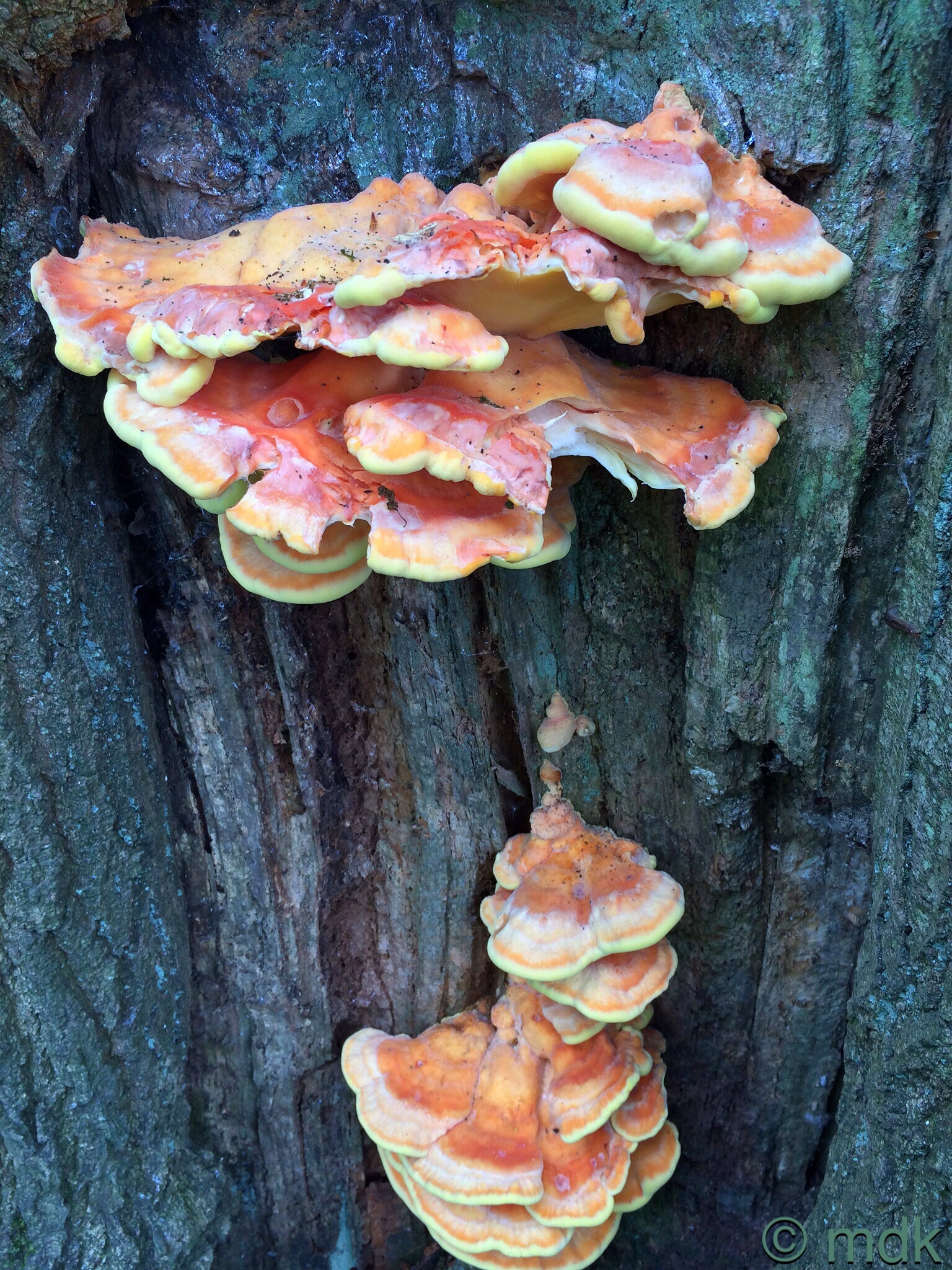 It is, I believe, laetiporus sulphureus, also know as sulphur mushroom or chicken of the woods and it’s edible with a taste like chicken, hence the common name. Even so, I don’t think I’d be inclined to test this theory by eating it. It has been growing on this same tree since last year, possibly even longer. They do tend to come back year after year when the conditions are right. Unfortunately, they also cause a brown rot inside the host tree which can, ultimately, lead to the branches becoming brittle and the tree dying. This one tree has a lot of frilly orange fungi with pretty yellow margins so, although it looks healthy enough, it may be doomed. 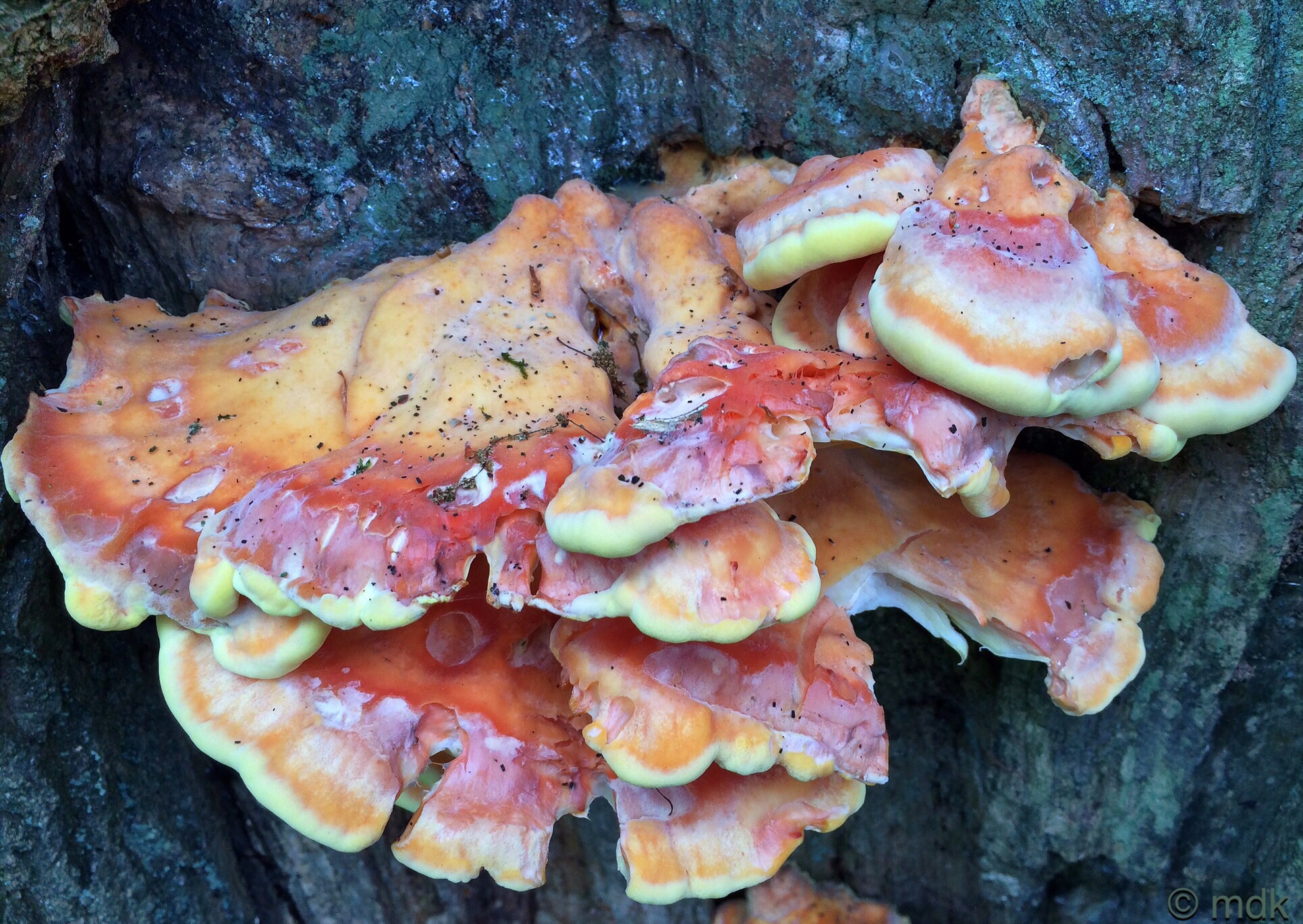 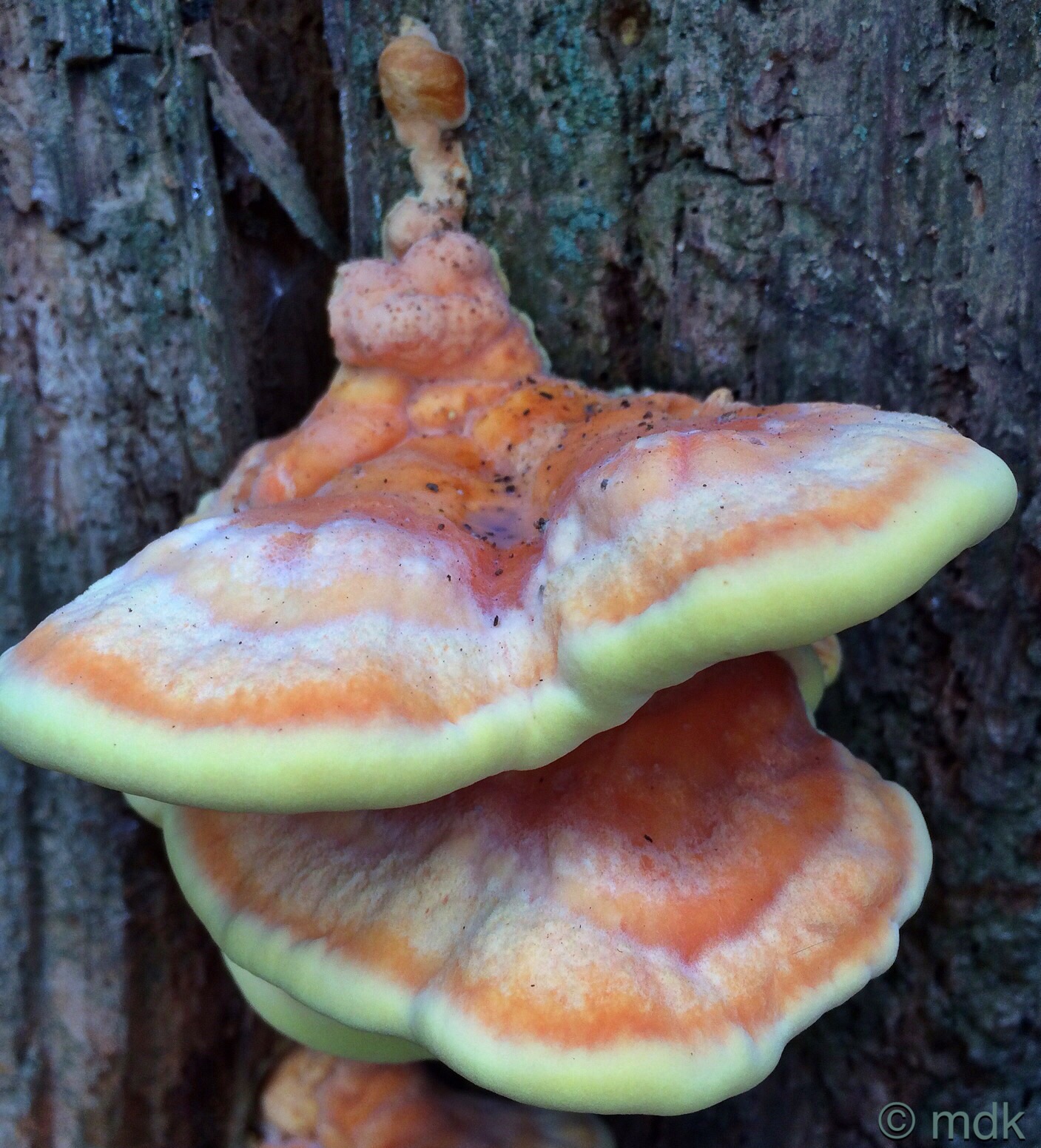 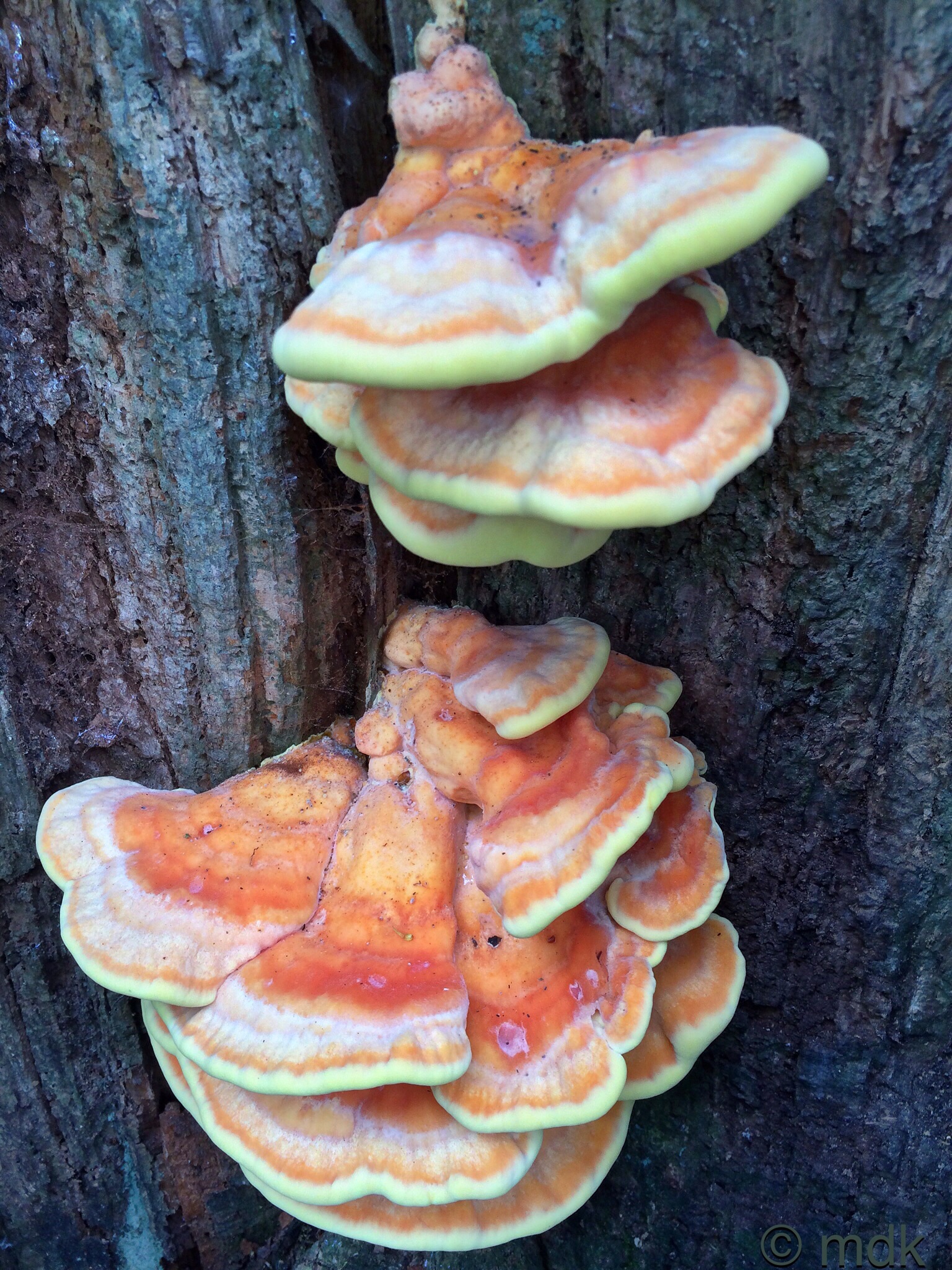 Leaving the fungus behind I plunged back into the trees again for the last part of the trail. It wasn’t long before I emerged onto Bursledon Road, as ever, feeling slightly shell shocked by the noise and light after the peace and dappled shade of the wood.

12 thoughts on “Shoreburs Greenway, a ribbon of green in the heart of the city”