It’s that time of year again. Time for a nice little fifteen mile stroll with the Care For A Walk team to raise money for MacMillan Cancer Care. So there we were again, eight o’clock on a Saturday morning eating bacon rolls in the New Inn in Totton. For once Commando wasn’t actually eating. He was going for an eighteen mile run while I was walking. The Manchester Marathon is coming up and he’s turned into an elite athlete these days. Bacon rolls were most certainly not on the menu, at least not before a run.

Familiar faces were beginning to appear in the bar, people I didn’t know five years ago for the most part. This is walk number five though and now they feel like regular walking companions even if we only walk together once a year. Commando was chatting with Pete about places to have a cooked breakfast. Pete is a cooked breakfast connoisseur and Commando needed something to fill the time between the finish of his run and my walk. It was either that or run home and leave the car for me.

Sadly the blue skies we’d been enjoying all week were nowhere to be seen but the forecast was good, no rain at least. Commando left the pub at the same time as the rest of us, heading left towards the forest. I thought we’d be following him up the hill but was surprised when Pete led us right instead.
“We’re taking a different route this year,” he explained when he saw my puzzled face. “After ten miles we’ll come back to the pub and pick up the five mile group.”
So that was the end of any small hope I had of knowing where we were. 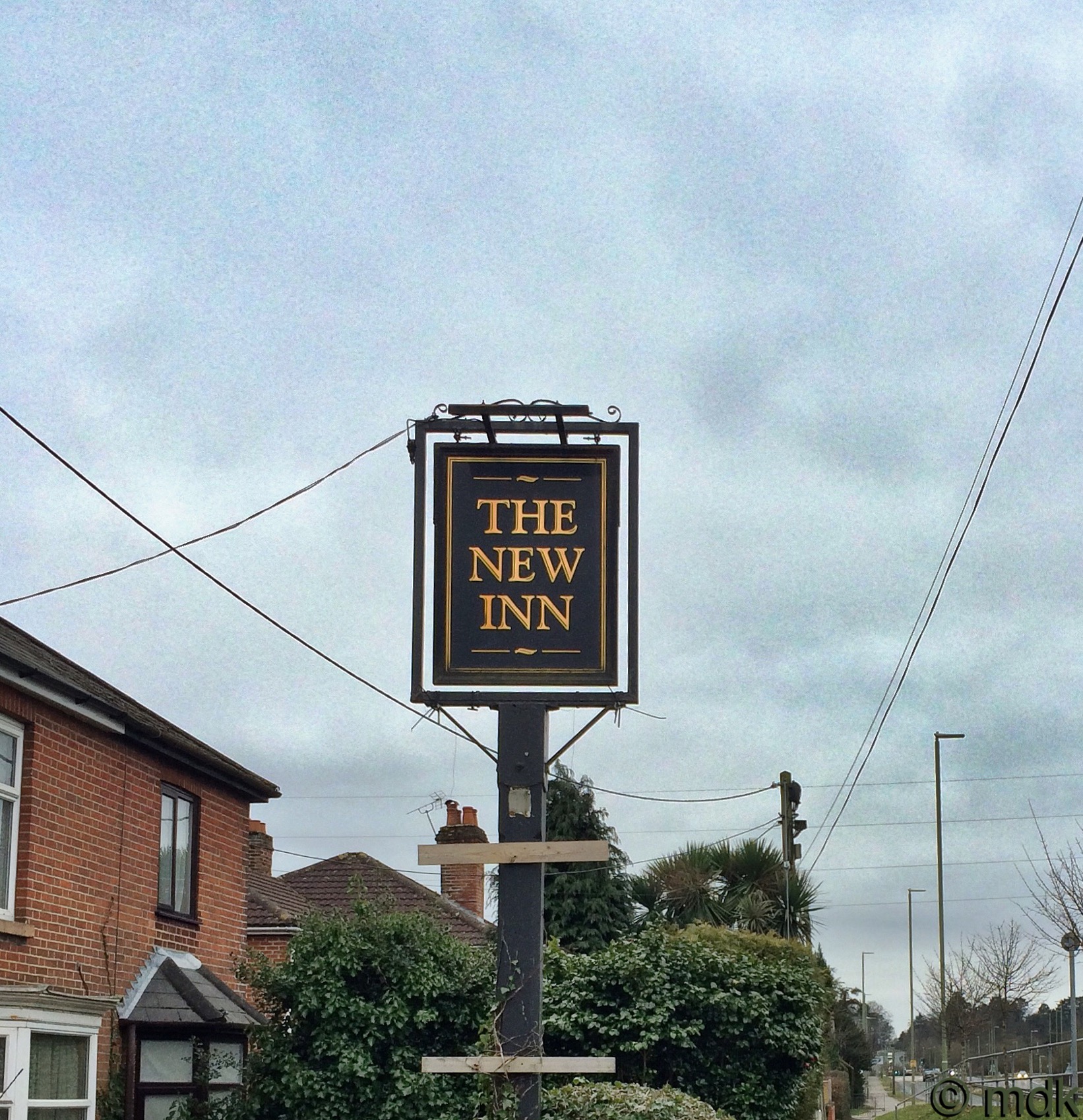 It was a magical mystery tour and, from the outset I was lost. This probably wasn’t helped by chatting to people and not really taking in the twists and turns of the route. Luckily Pete knew where he was going as he led us along footpaths through an estate of new houses that astounded me by being so small. We passed a small football pitch that Pete said belonged to Totton FC. Nearby we hit the first mud. It wouldn’t be a Care For A Walk route if there wasn’t mud but, thankfully, there wasn’t much of it and it was easy to get round. 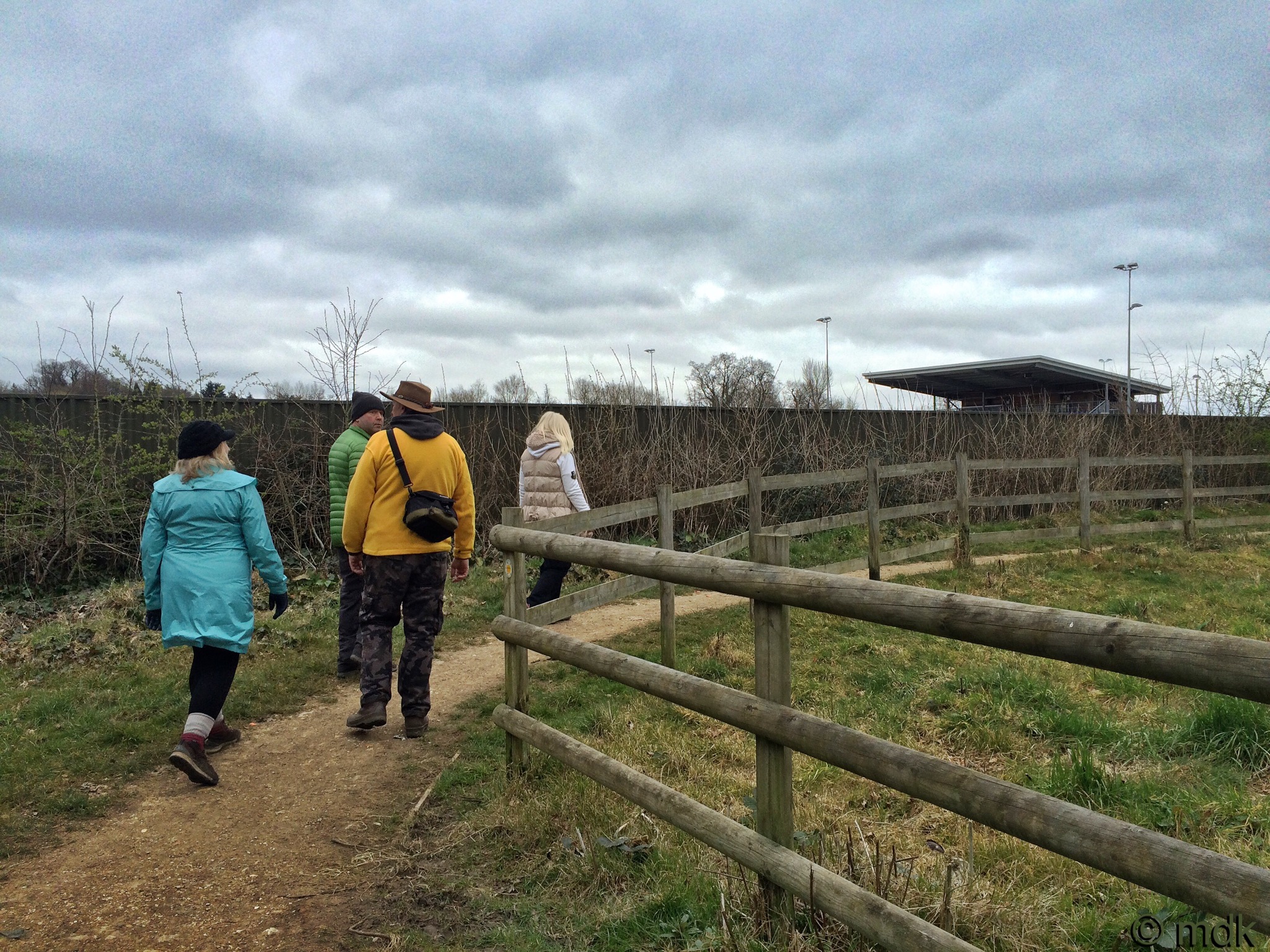 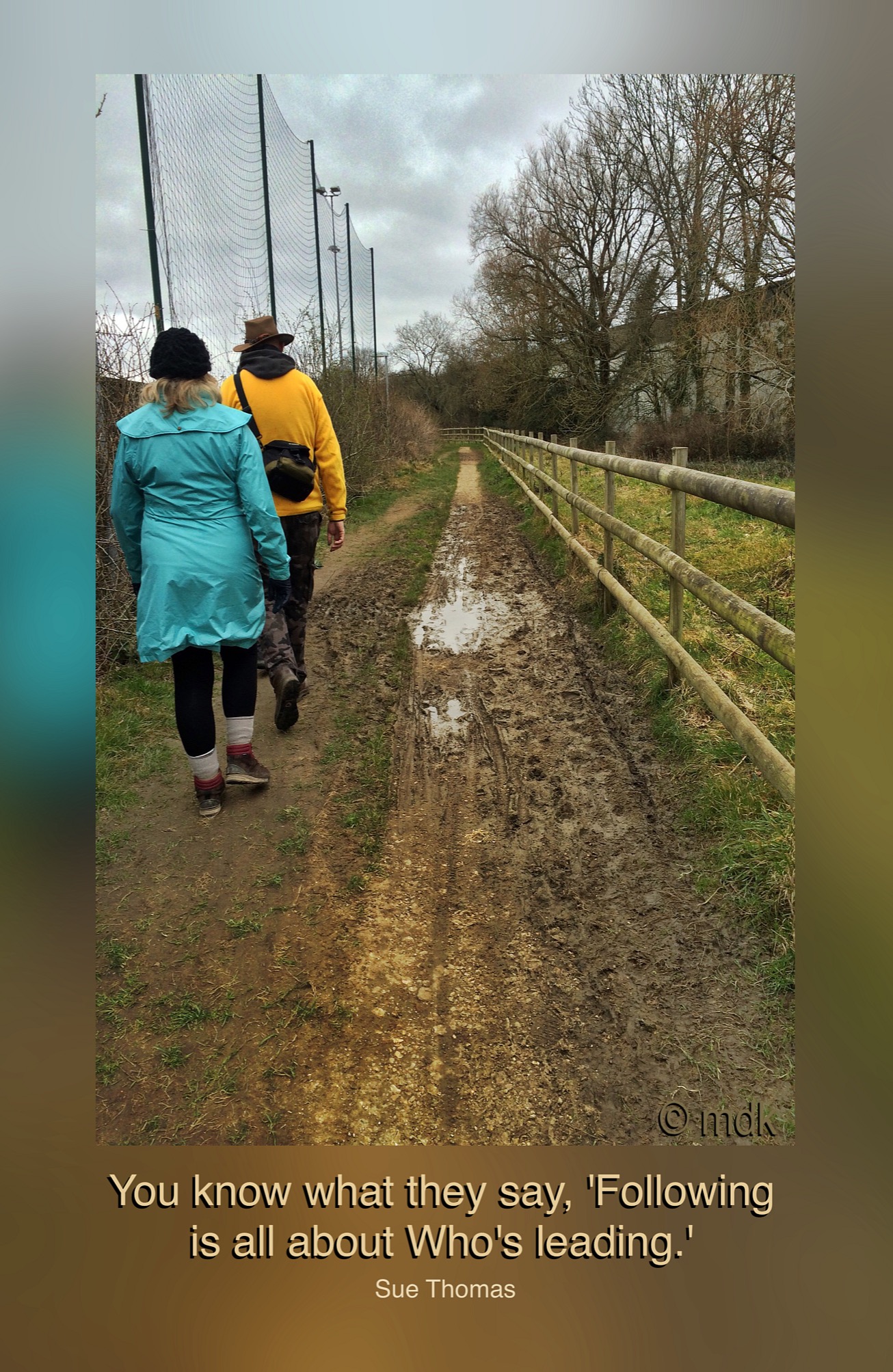 Shortly after this things took a more rural turn and I had a vague idea where were were as we walked between two lakes. There were a few people about walking dogs and running beside the lakes. One man was sitting on a bench with what looked like a can of beer beside him although it was only half past nine or so. The lakes might have been prettier with a nice blue sky overhead but the clouds steadfastly refused to budge. 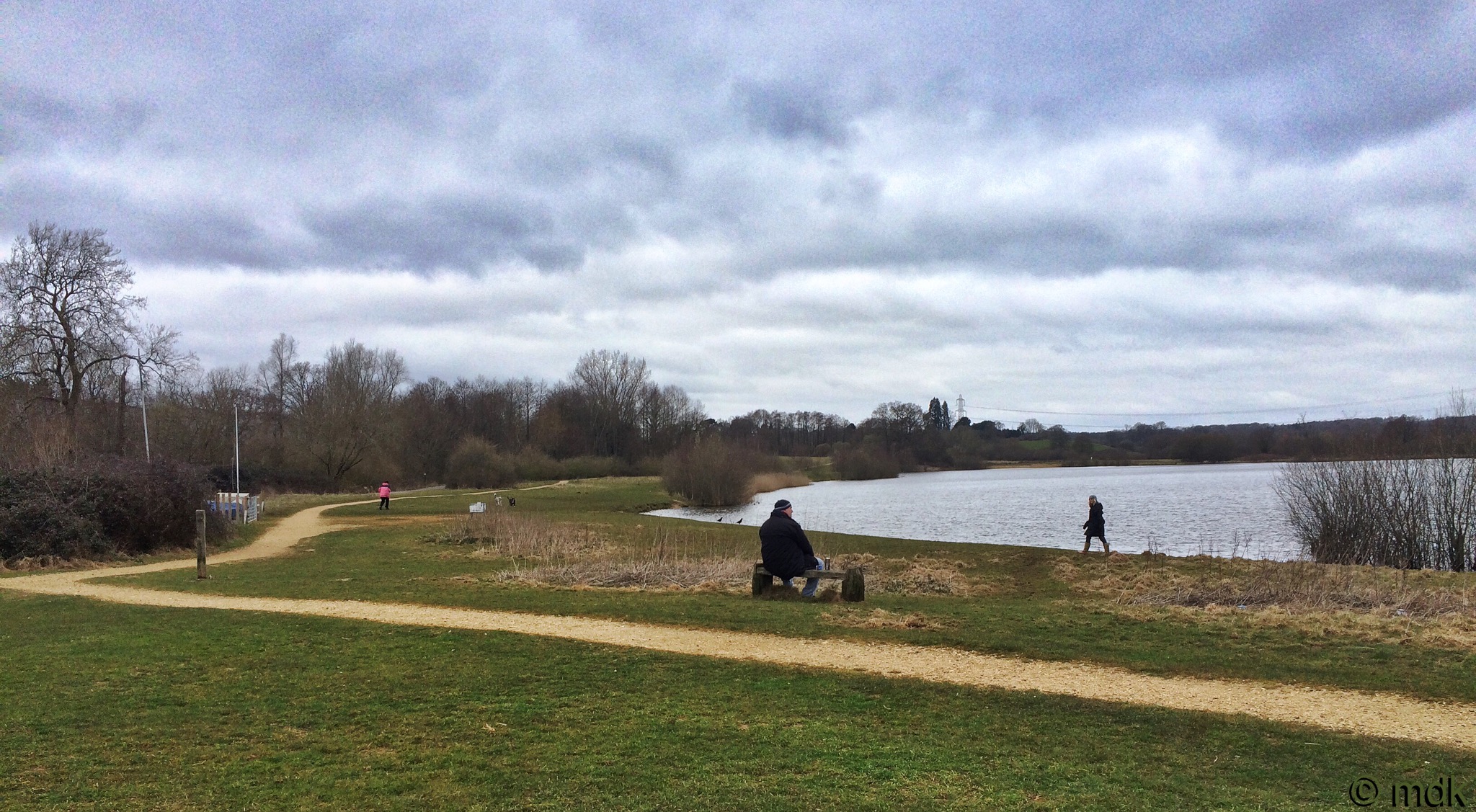 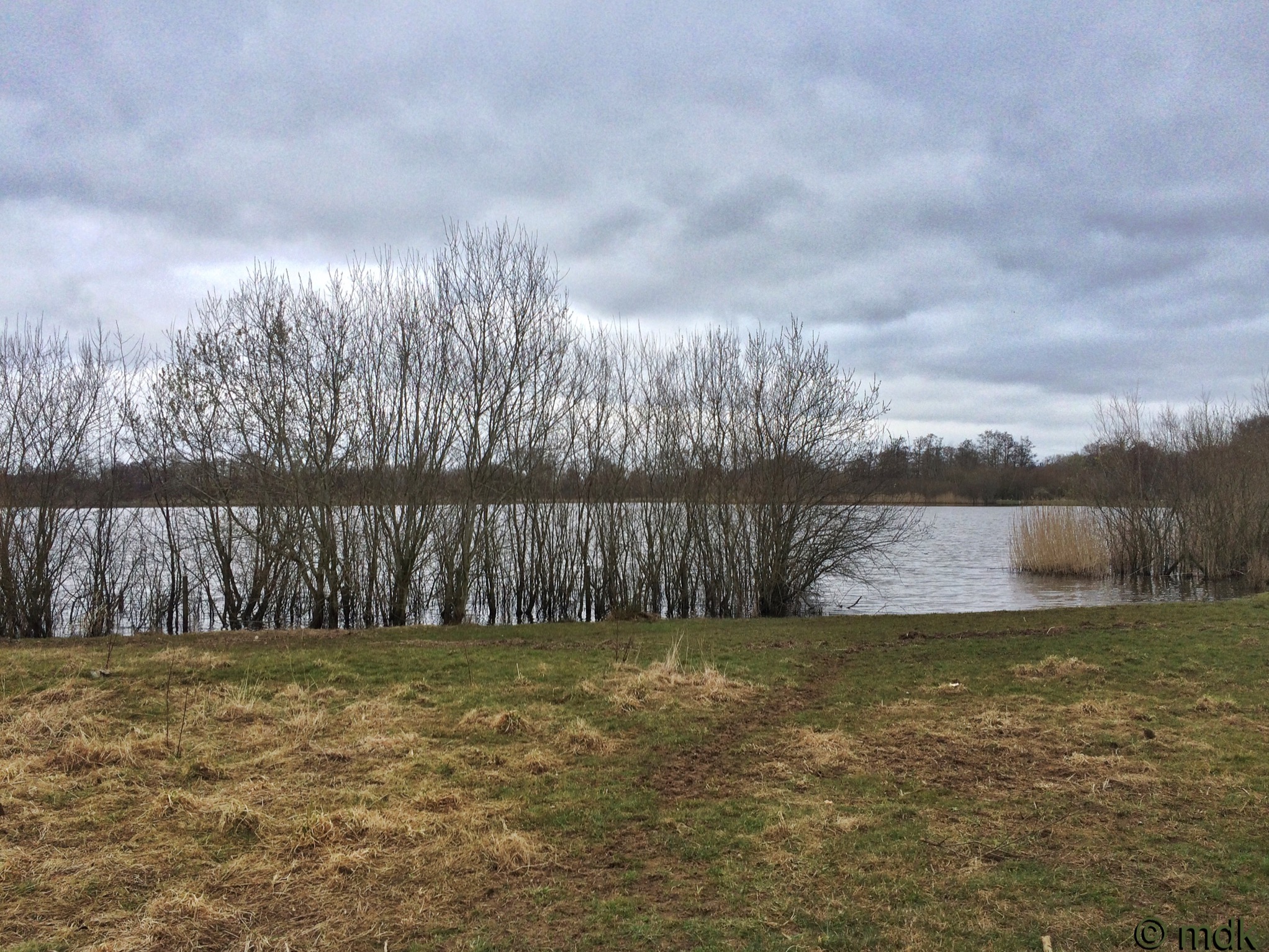 Given the general direction I thought we’d been walking and the distant rows of pylons, I had an idea we were somewhere on the mass of trails that criss cross the marshy delta of the River Test between Totton and Southampton. This is an area I’ve touched on but never really explored so that was about as far as my knowledge went. A later look at the GPS tags on my photos told me this was Testwood Lakes. 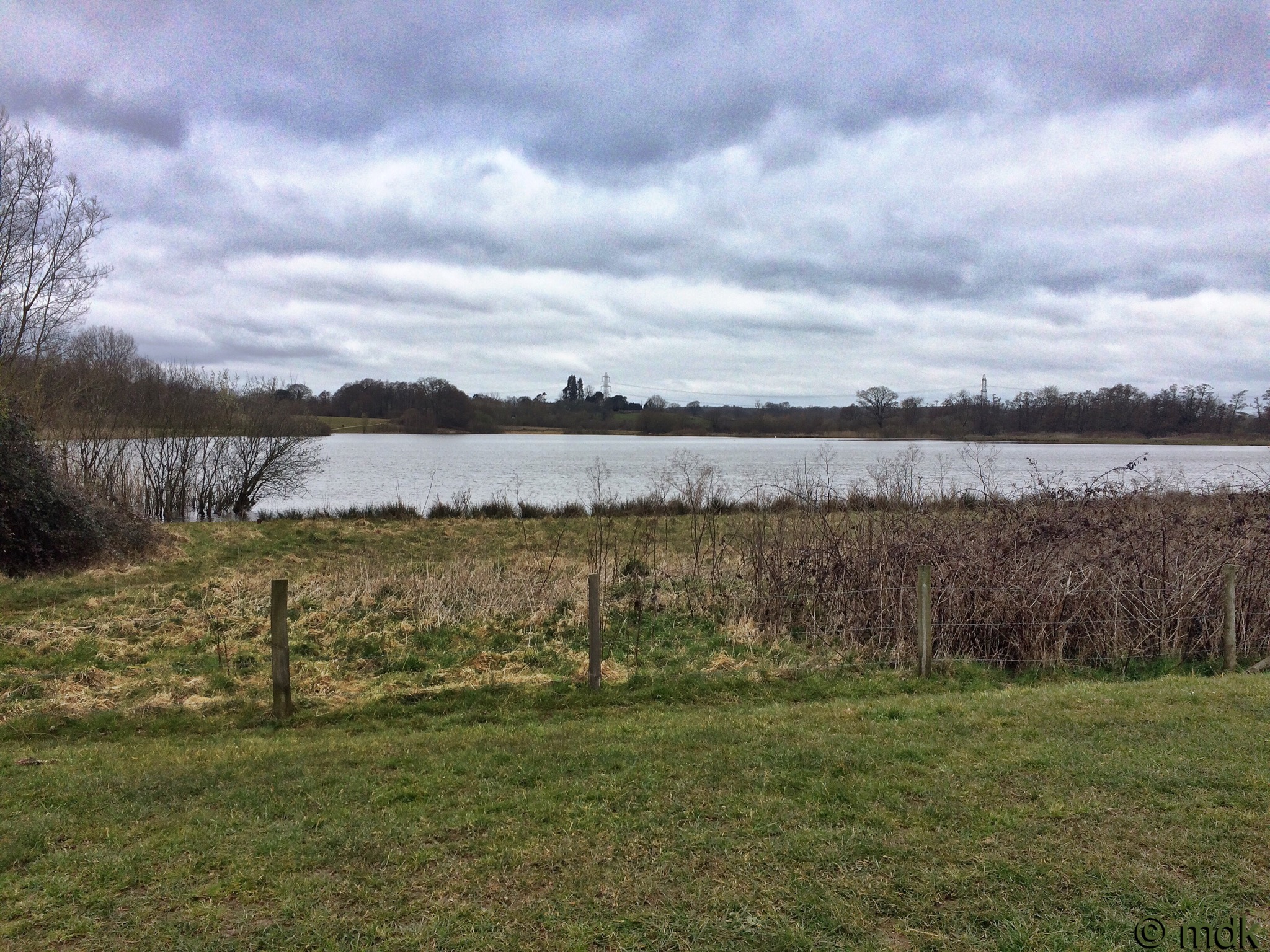 Five minutes later we crossed the Test, at least I think it was the test it may have been one of the myriad of tributaries and streams. Some curious conical concrete structures caught my eye. These, Pete explained, were tank traps, put there during World War II to prevent the invasion that never happened, or at least getting about if it did happen. They were weathered and moss covered, some had even been upended and tipped into the water.  CJ would have liked them and, if I can ever find my way back, I might bring him to see them one day. 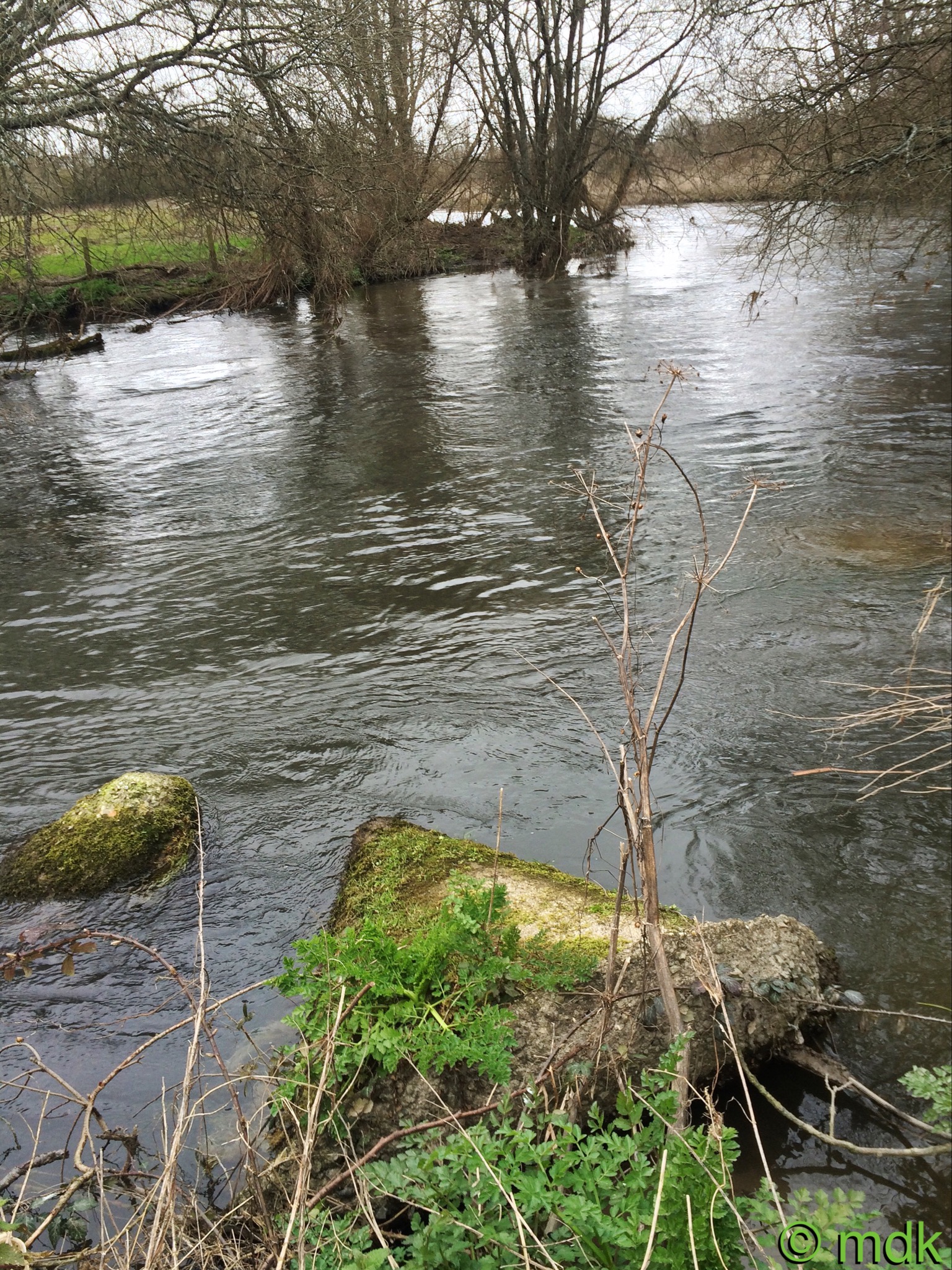 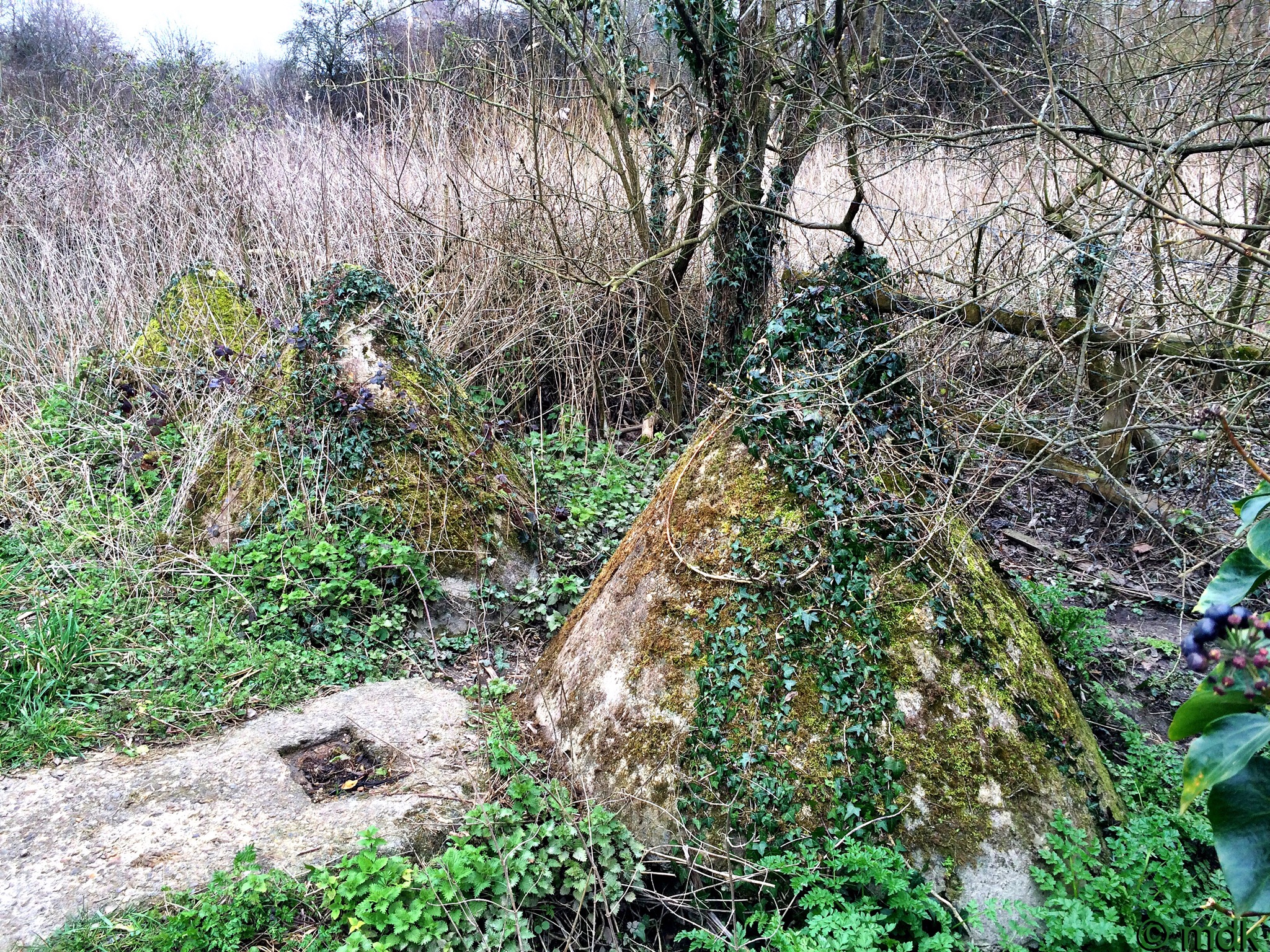 On the other side of the bridge we came out onto Mill Lane, although I didn’t know that at the time. We passed a lovely old building that turned out to be Nursling Mill, part of the Baker-Mill Estate that once stretched along the Test valley. The watermill was built to grind corn in 1728 but the building we passed was built in the eighteenth century on the original beech timber frame. It is no longer a mill but, when it was converted into two dwellings the mill machinery was kept.  This is somewhere else I should like to come back and explore. 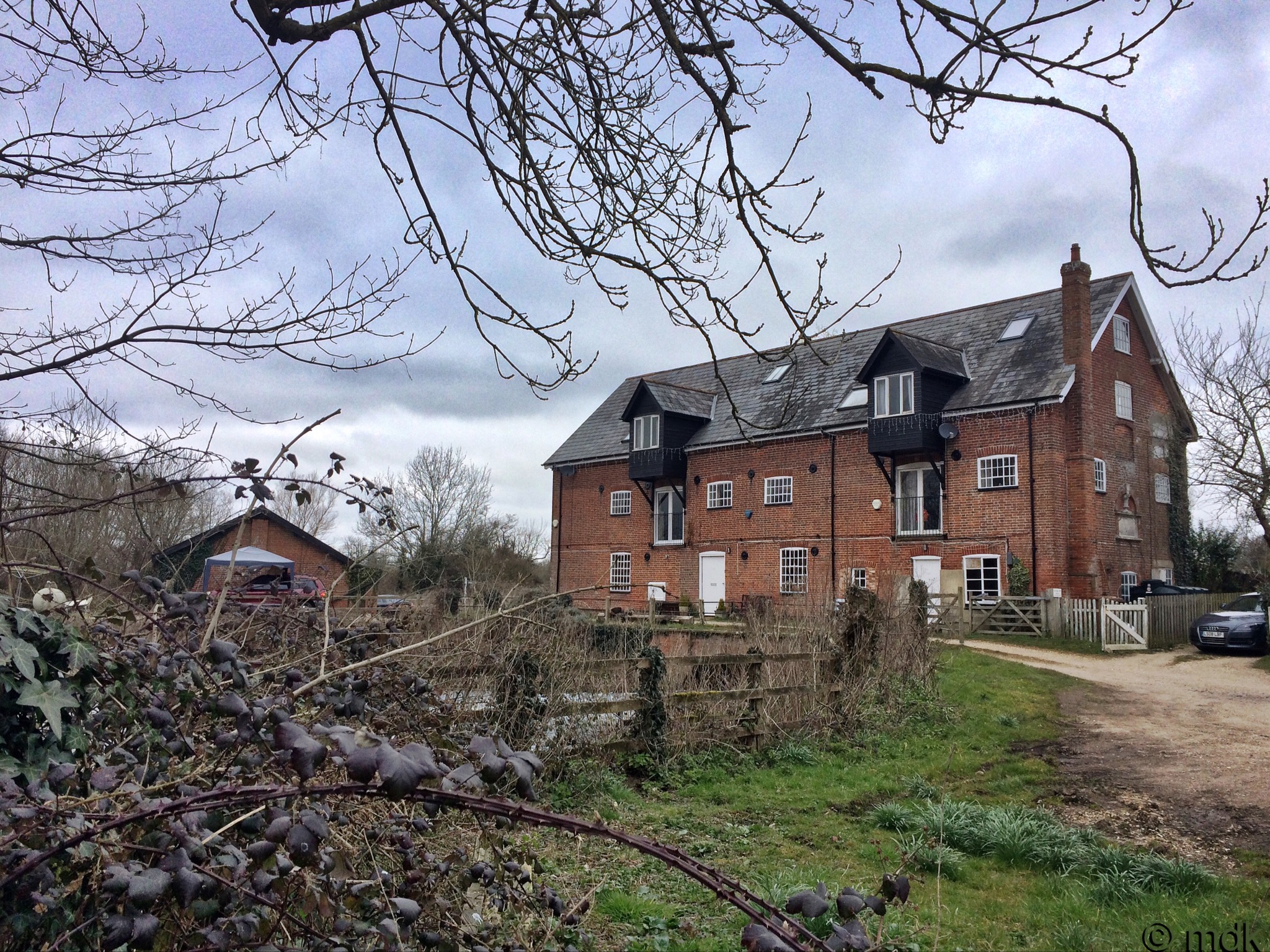 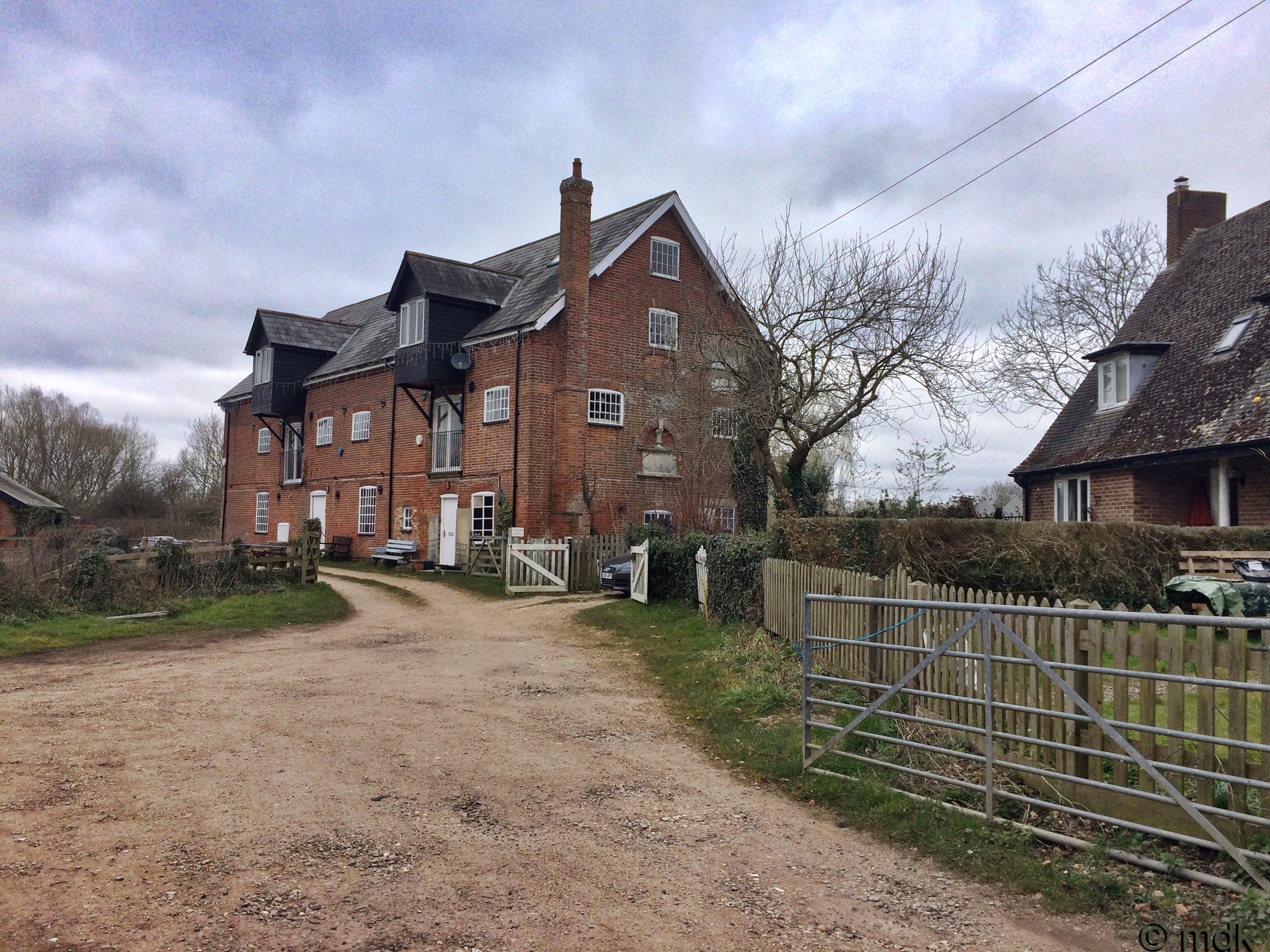 Further along the lane Steve stopped to chat with a pony over the gate of a large field. The pony seemed unconcerned by the massive pylon right next to him. Across another branch of the Test we saw more horses grazing in a field. We turned off onto Station Road and, not long after, saw a Shetland pony in yet another field. Nursling seemed to be filled with horses as far as I could tell. 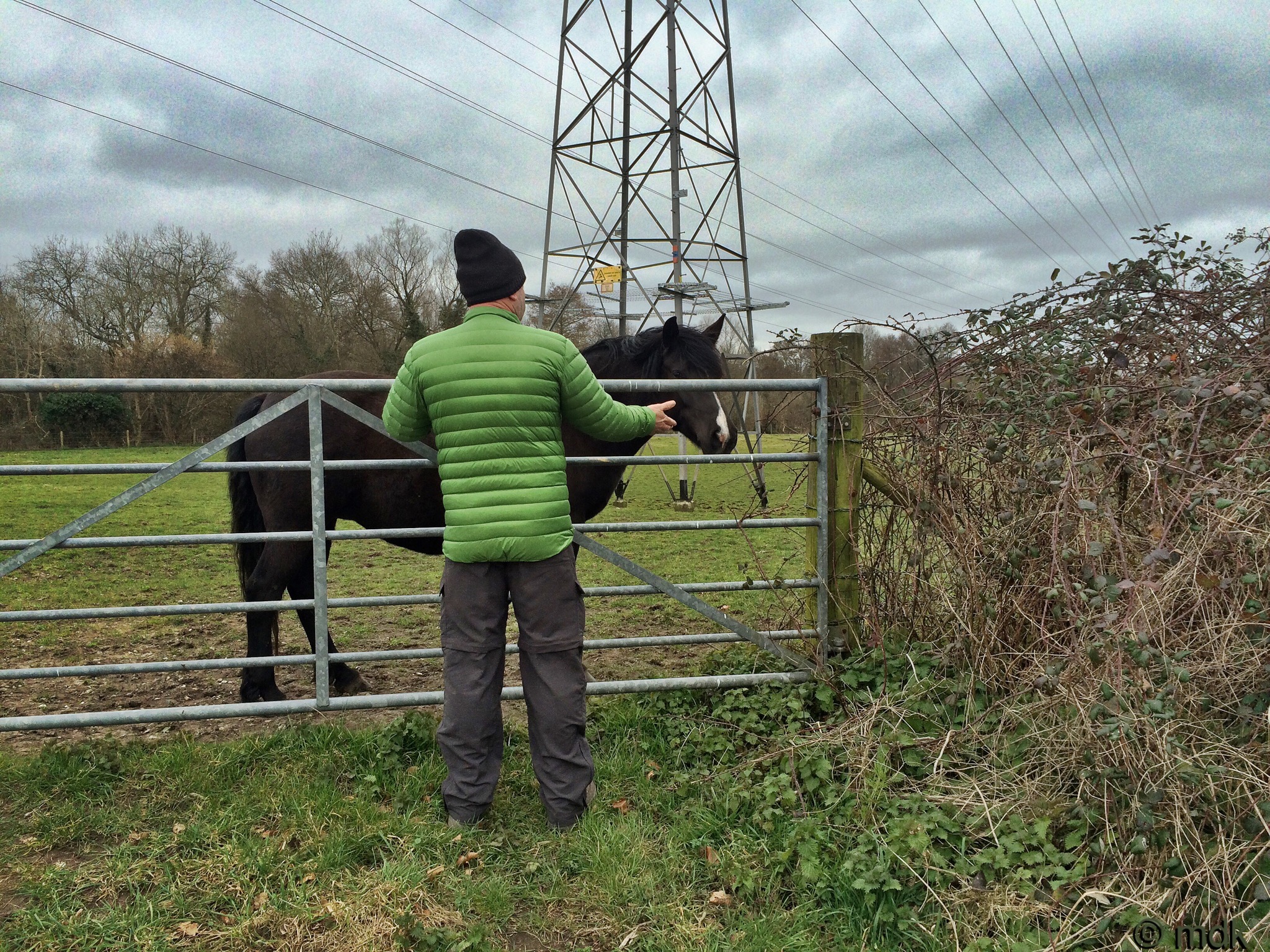 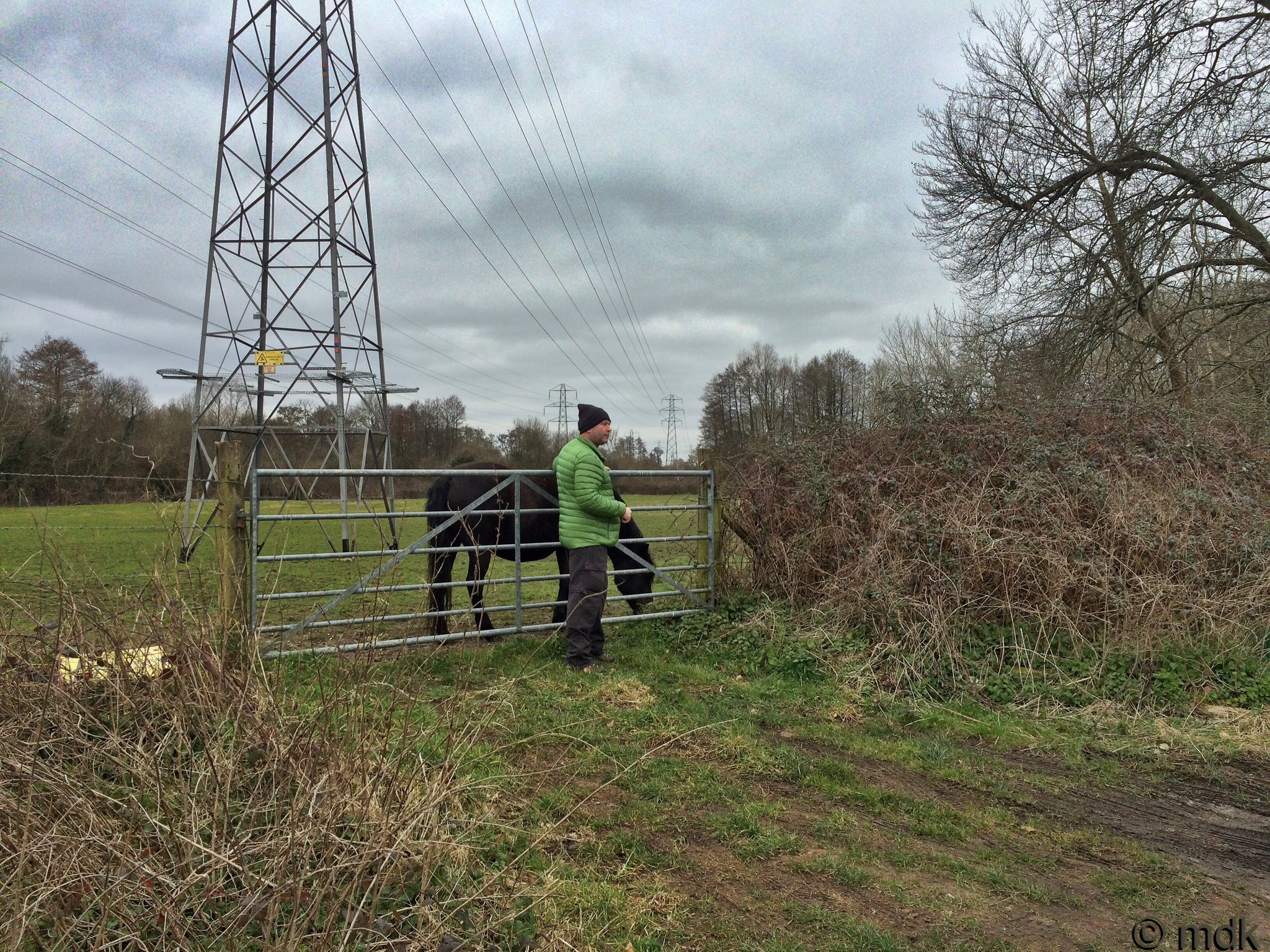 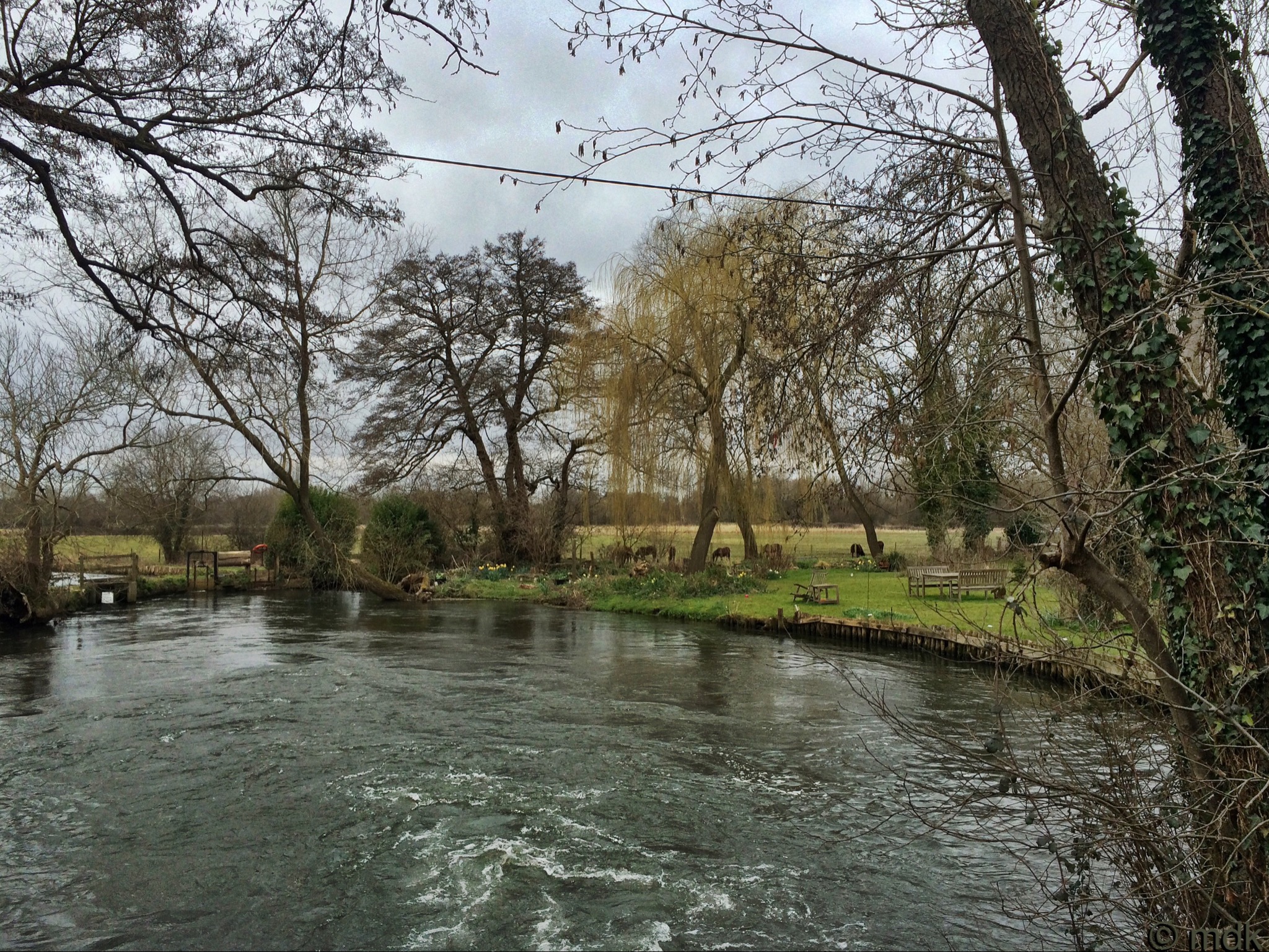 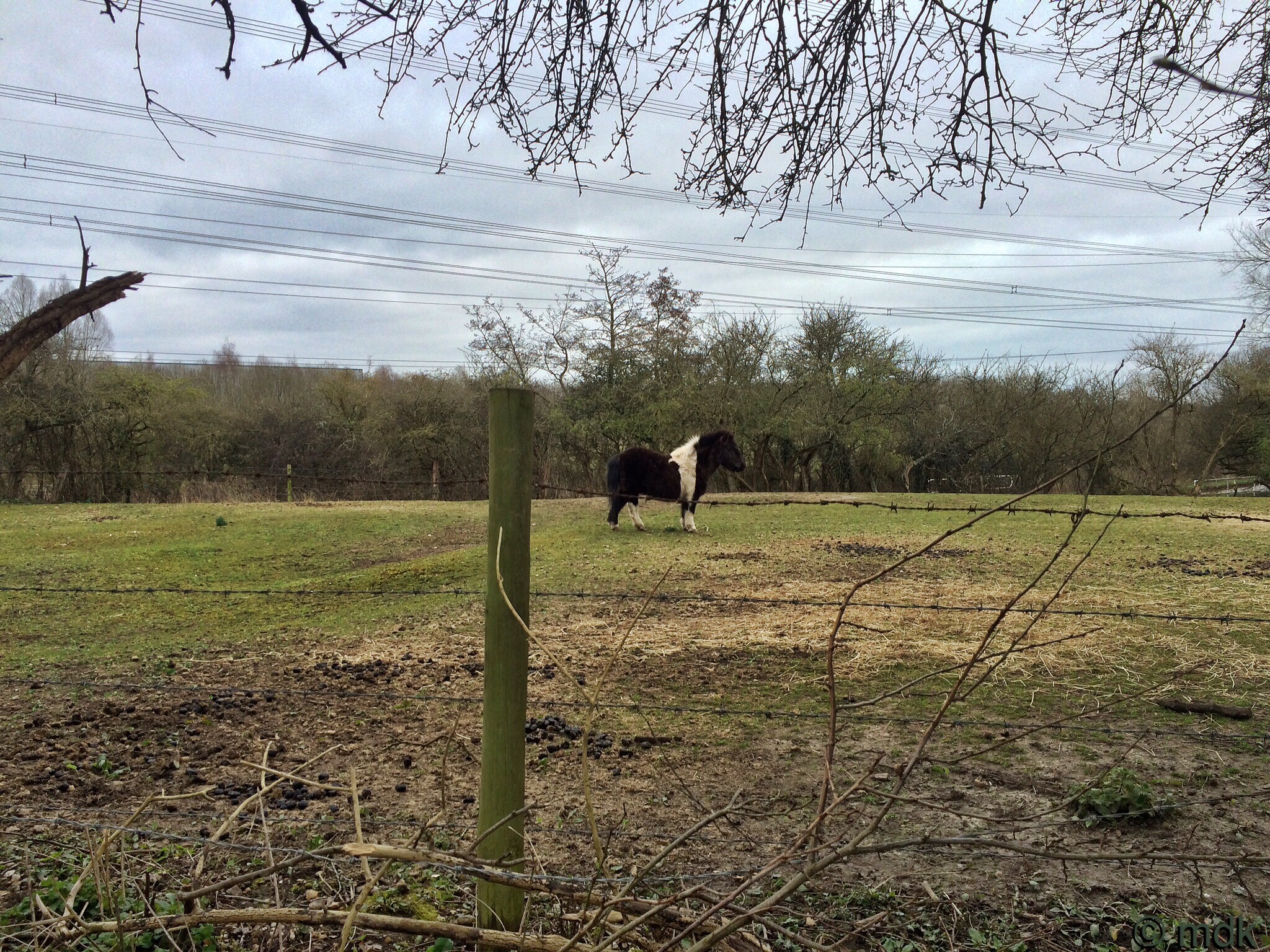 At the end of a quiet lane our rural idyl came abruptly to an end with Nursling Business Park and a large Tesco distribution depot. Soon we were passing under the Motorway that  noisily cuts Nursling in two. On the other side we found the Four Horseshoes pub, dating from 1893. A few of our number seemed disappointed it was closed. 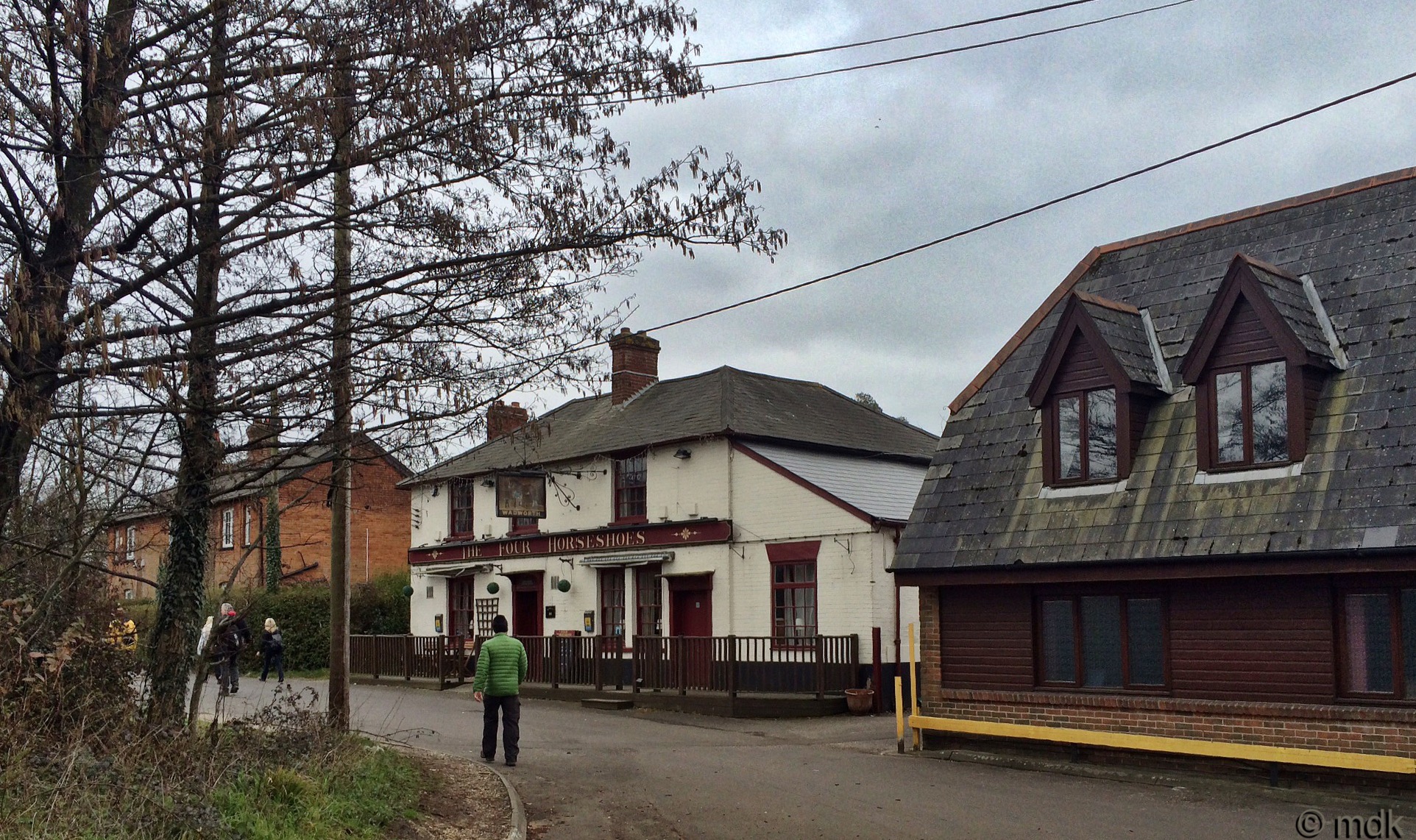 Things seemed to get more rural again when we turned onto a quiet lane. Actually, it wasn’t as quiet as all that, there was a distinct motorway hum to our right. By this time I was completely at a loss as to where we were so the irony was not lost when the new Ordnance Survey building appeared on the horizon. Now I knew we must have been in the new Adanac Business Park, once part of Adanac Farm and crossed by a Roman Road. Luckily Pete, who seems to have a map for every occasion inside his head, knew exactly where he was going. Otherwise I’d have had to pop into the OS offices to get one of their wonderful maps. 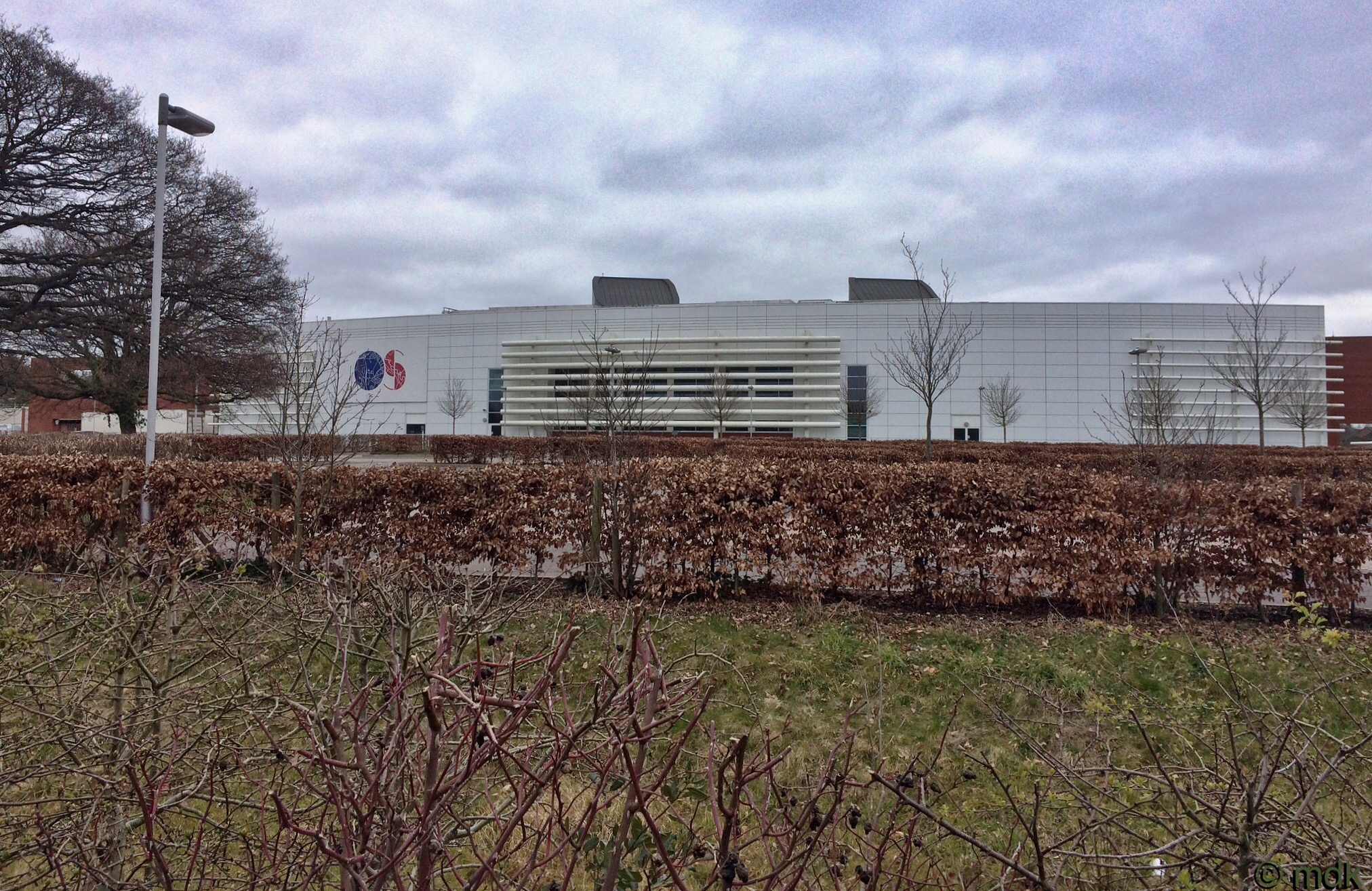 Across fields to our right I could see a pretty little cottage stranded alone in a field between the motorway and the business park. In the garden was a tree covered in a pink haze of blossom and behind it a tower block loomed. Bewildered I tried to place it and get my bearings. I failed abysmally. 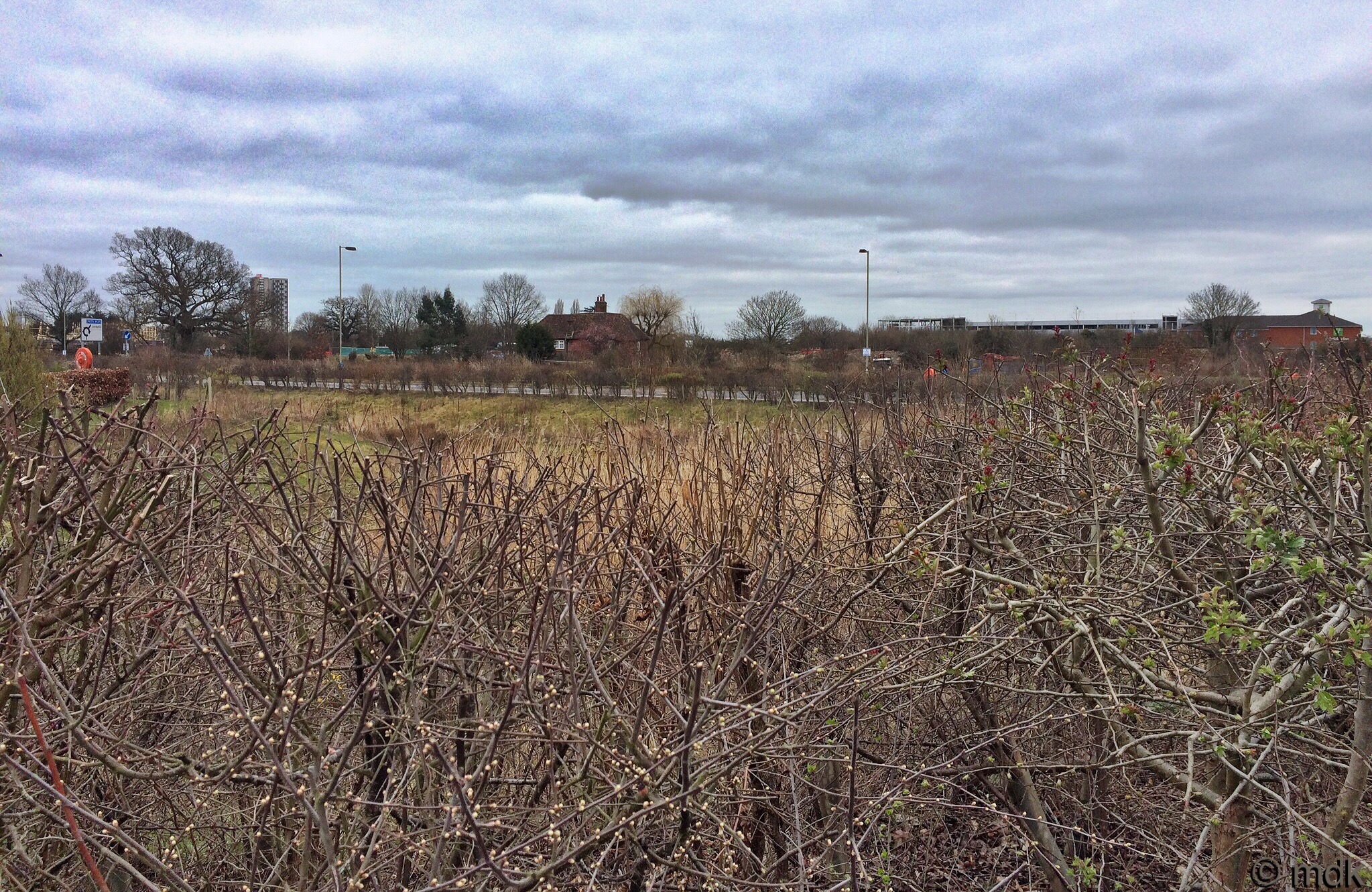 The tower block suggested we must be walking towards Southampton, the opposite direction to the one I’d thought. After some more crossing of busy roads we came to a beautiful chocolate box thatched cottage with a timber framed barn and huge greenhouses.  The garden was filled with rows of vegetables. It was obviously a small farm. It turns out it’s called Bargain Farm and plans are afoot to knock it down and build a housing estate. What a shame. 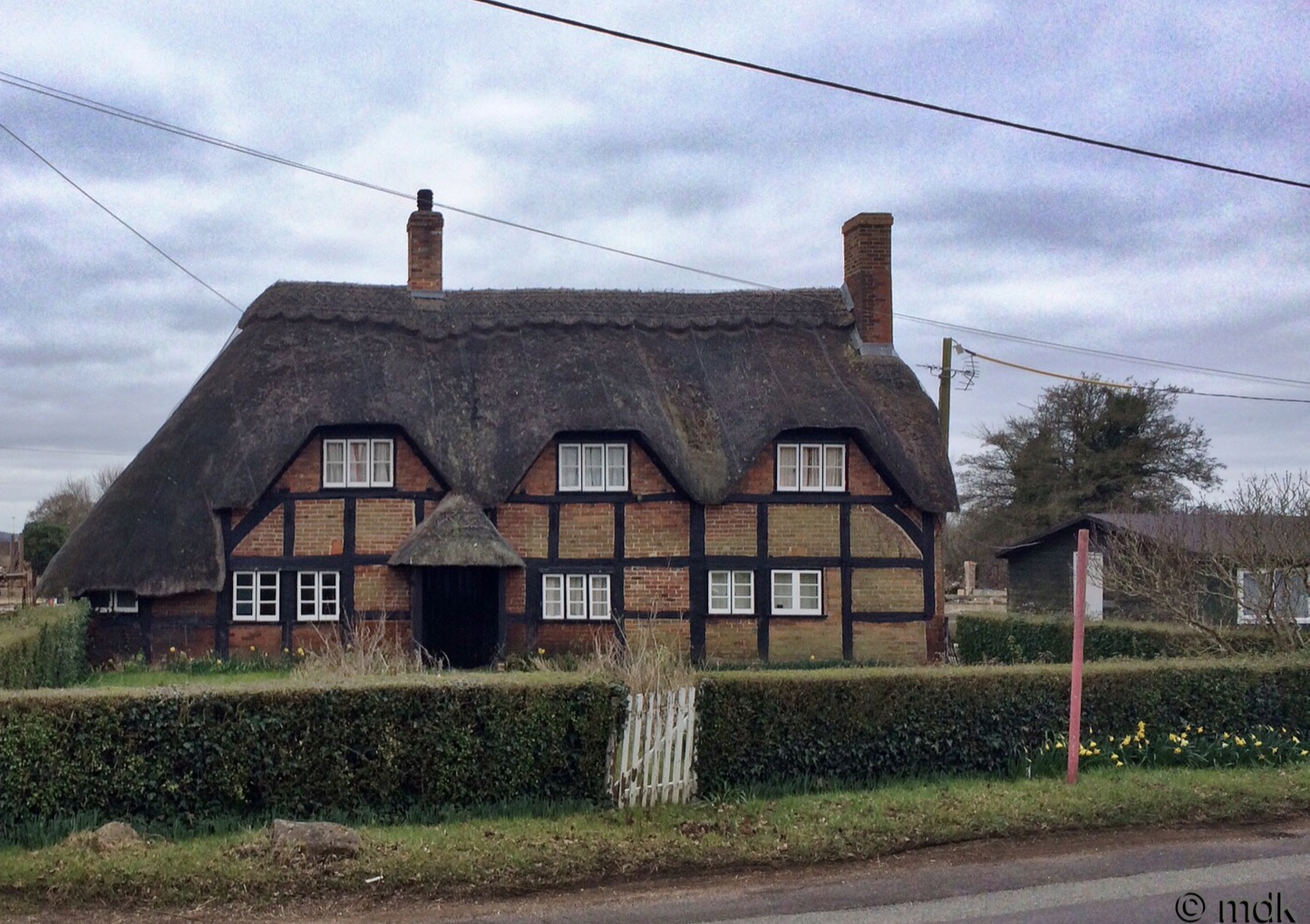 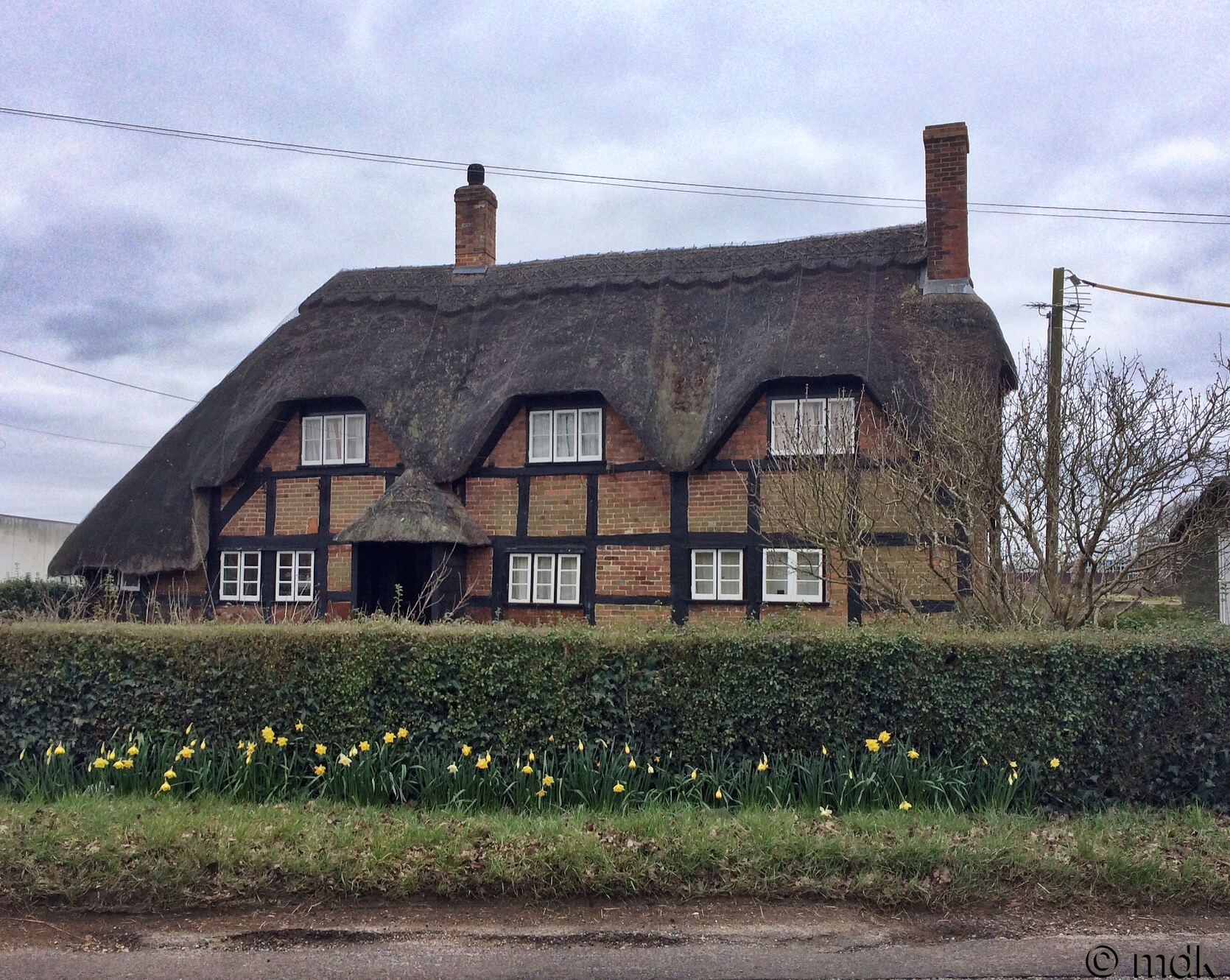 Soon things started to look vaguely familiar and I knew for certain we were in Southampton. In fact we were in Milbrook, an area I don’t know well at all so I wasn’t really any the wiser. We came to the Saints Pub, which looked to be about to open. There were a few grumbles as we passed it by.

For a brief moment, as we crossed the Redbridge roundabout then the Totton Bypass over the Test, I knew exactly where we were. This is a walk I’ve done in reverse a few times. To our left were the cranes of Southampton Docks, to our right I knew was the old Redbridge and a boundary stone I’ve yet to tick off my list. It was tantalisingly close. 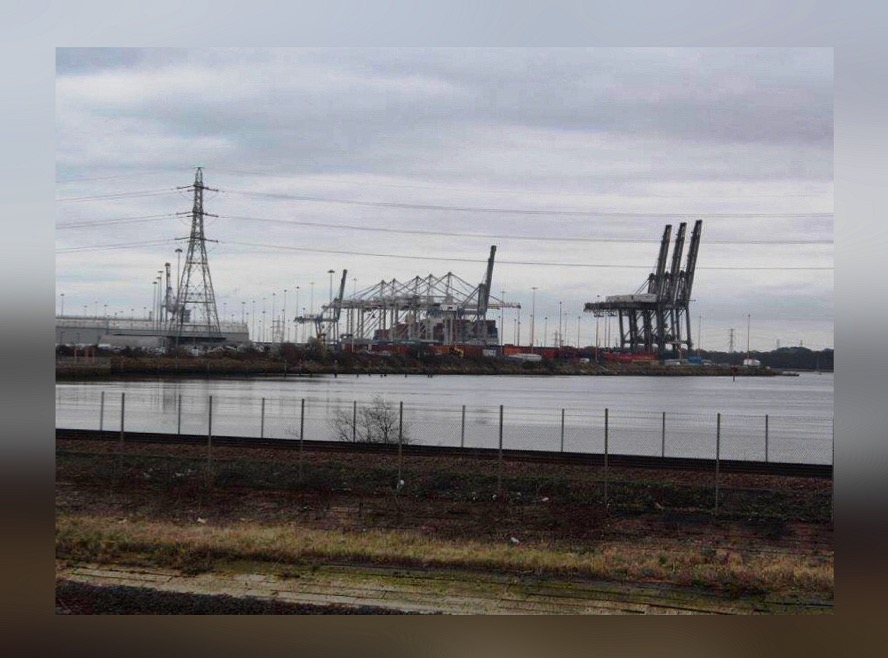 Knowing where I was didn’t last. On the other side of the bypass bridge we veered off into the back streets of Totton, or maybe it was Eling. Passing the rather beautiful Old Station House, now turned into flats, didn’t help any. It wasn’t until the New Inn was actually in sight in front of us that I knew where we were again. The ten mile section of our walk was over and it was time to meet up with the five mile walkers. 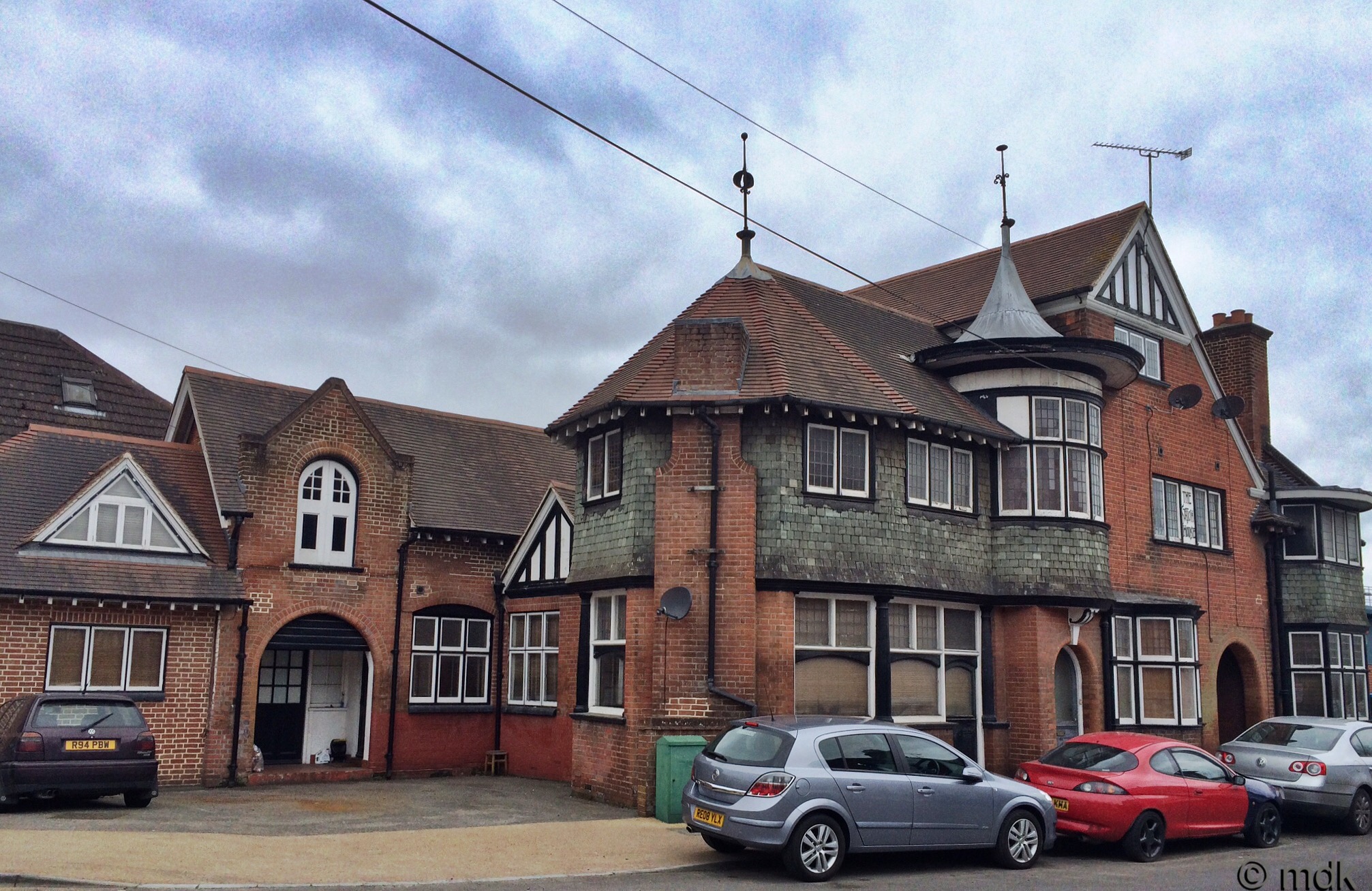