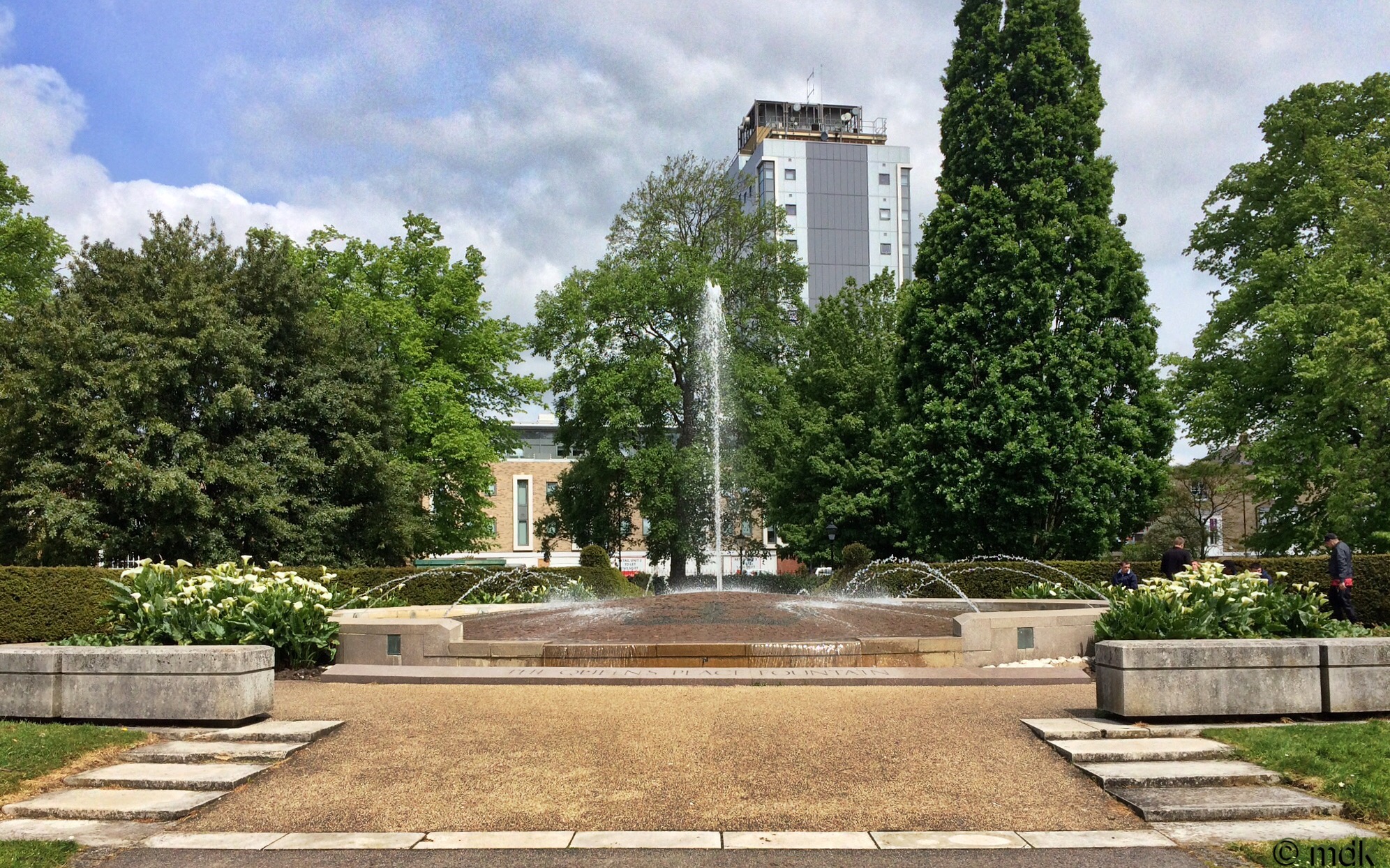 Of course whenever happened I’d have been walking home, whether I kept following the Roam art trail or not. The next exhibit was, according to the leaflet, at Northam Social Club. By now my expectations of actually finding anything else were fairly low but I couldn’t help looking around at the trees as I headed for the road, just in case the white bike was lurking.

“Are you lost?” a man came up to me by the Queen’s Peace Fountain.
“Um, no, just admiring the trees,” I replied, too embarrassed to admit I was looking for a white bike that should have been at the top of a dead tree but wasn’t. Let’s face it, it would have taken some explaining.
“The parks are lovely at this time of year aren’t they? We’re so lucky to have them.” 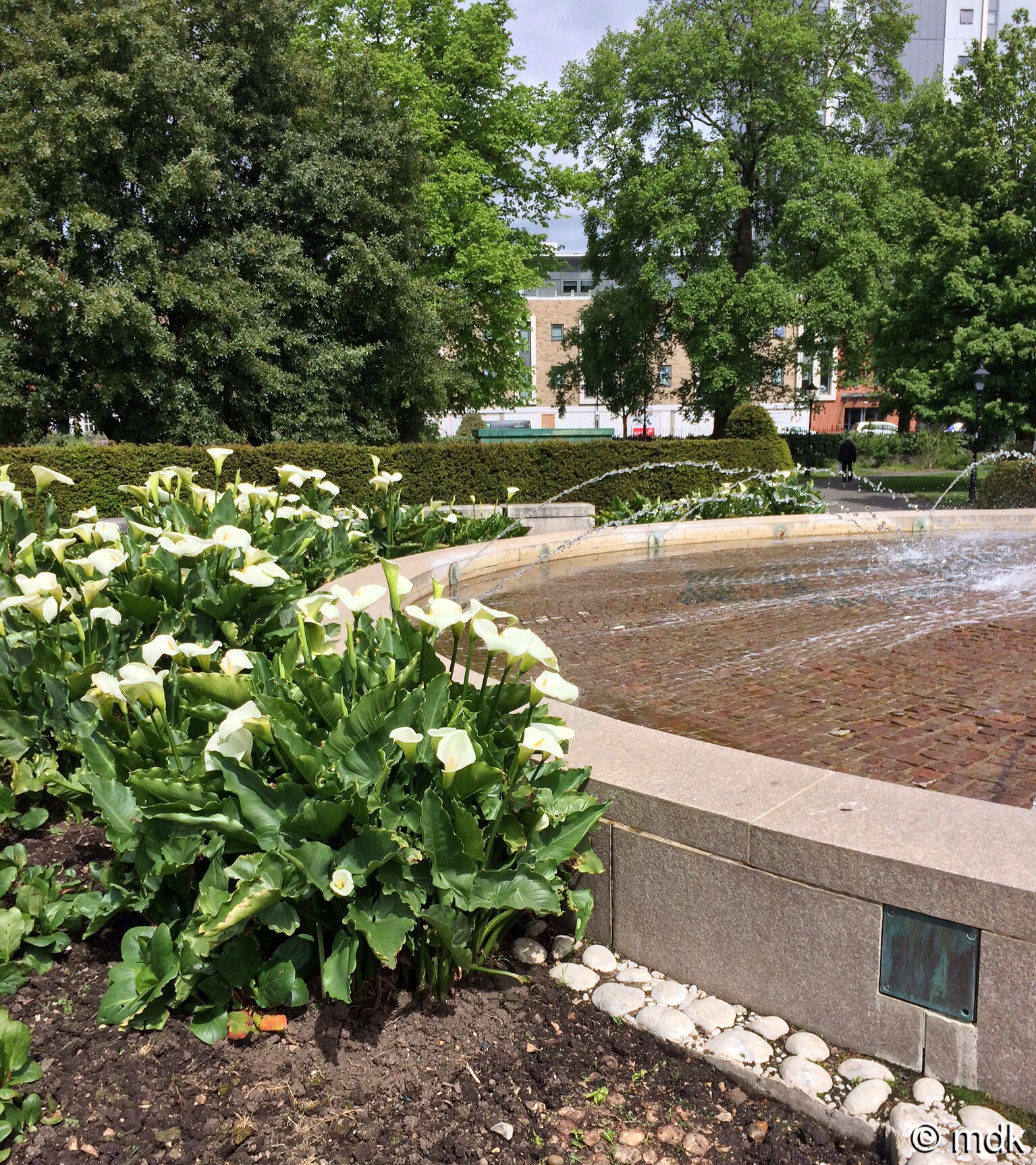 Trying not to look too much like a mad woman, I took a photo or two as I made my way towards the road. The tinkling fountain surrounded by lilies and the irises along the path made up a little for the white bike disappointment and put some distance between the man and I. With one last speculative look into the spreading chestnut tree by the park entrance I gave up all hope of finding the bike and set off towards home. 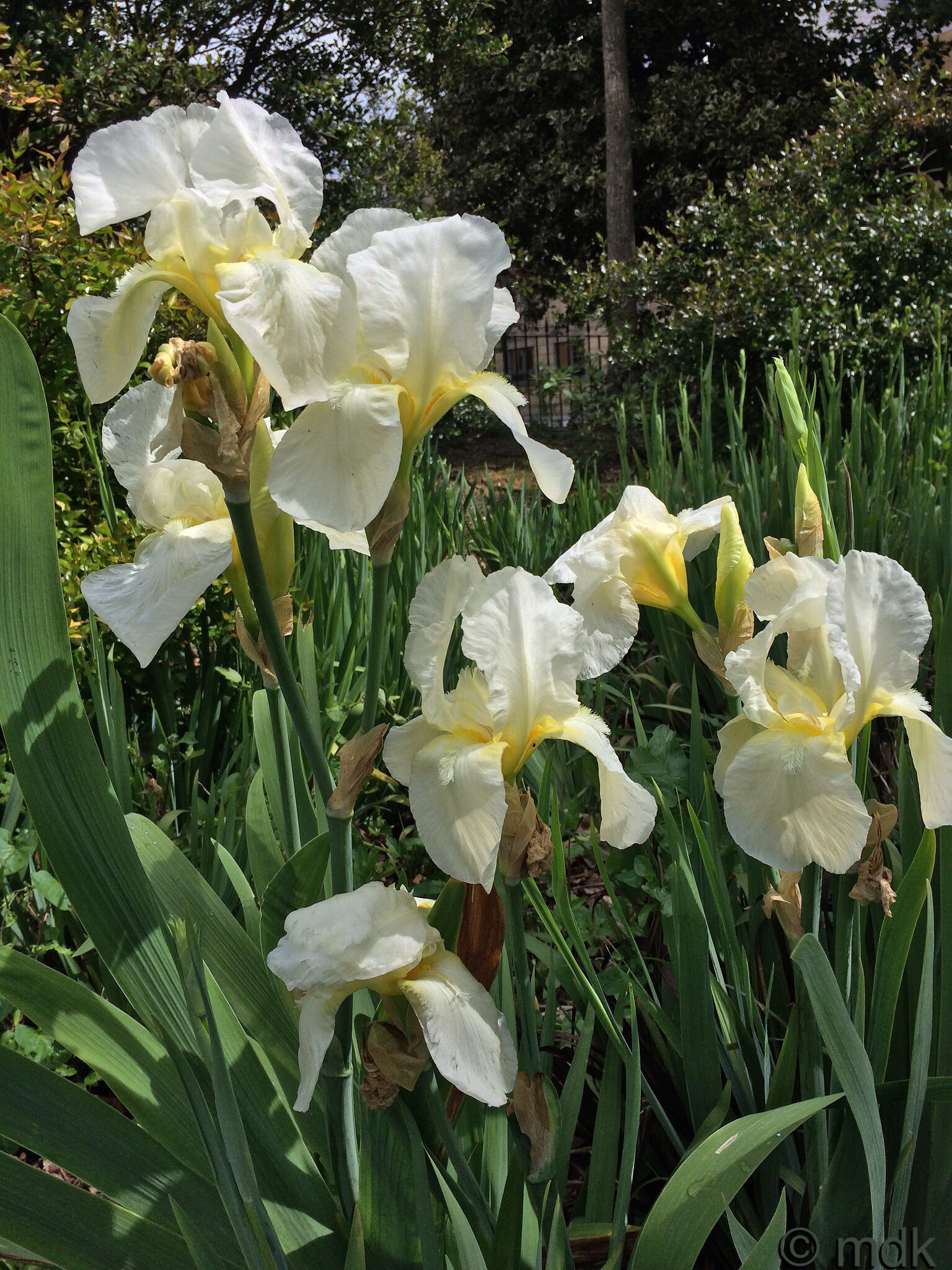 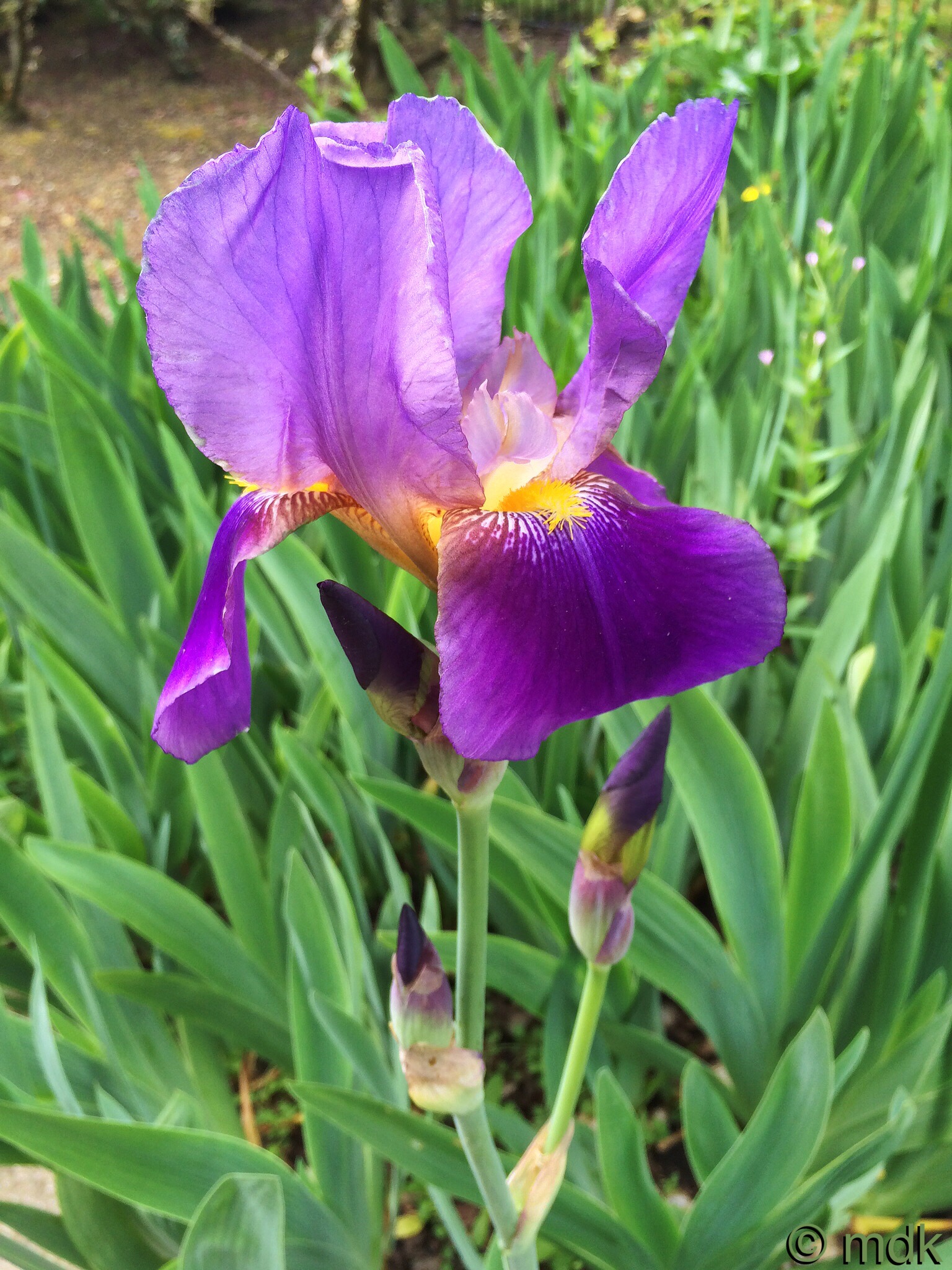 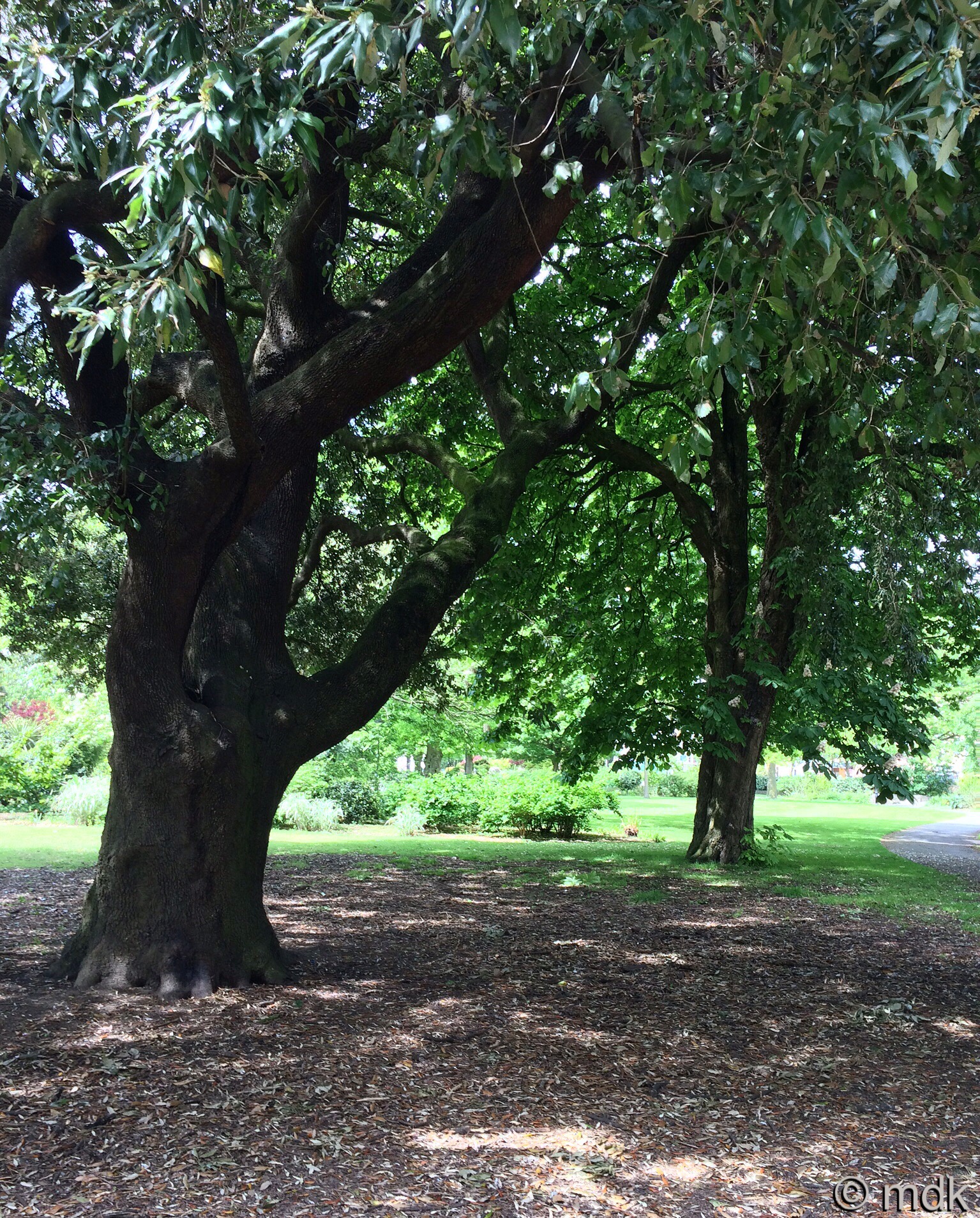 For a while I stopped thinking about art exhibitions and just enjoyed walking In the sunshine, even if it was through Six Dials and along the main road. In front of  the Northam Traincare Depot there’s an odd little pond. It always seems a strange place for a pond, right next to the road and behind railings where no one can get to it. Perhaps it’s somewhere for all the train cleaners to sit and have their lunch or maybe there’s an entrance I’ve somehow missed? Today there were ducks beside the pond and bread in the grass so obviously someone visits. The social club was right ahead though so it didn’t give it too much thought. 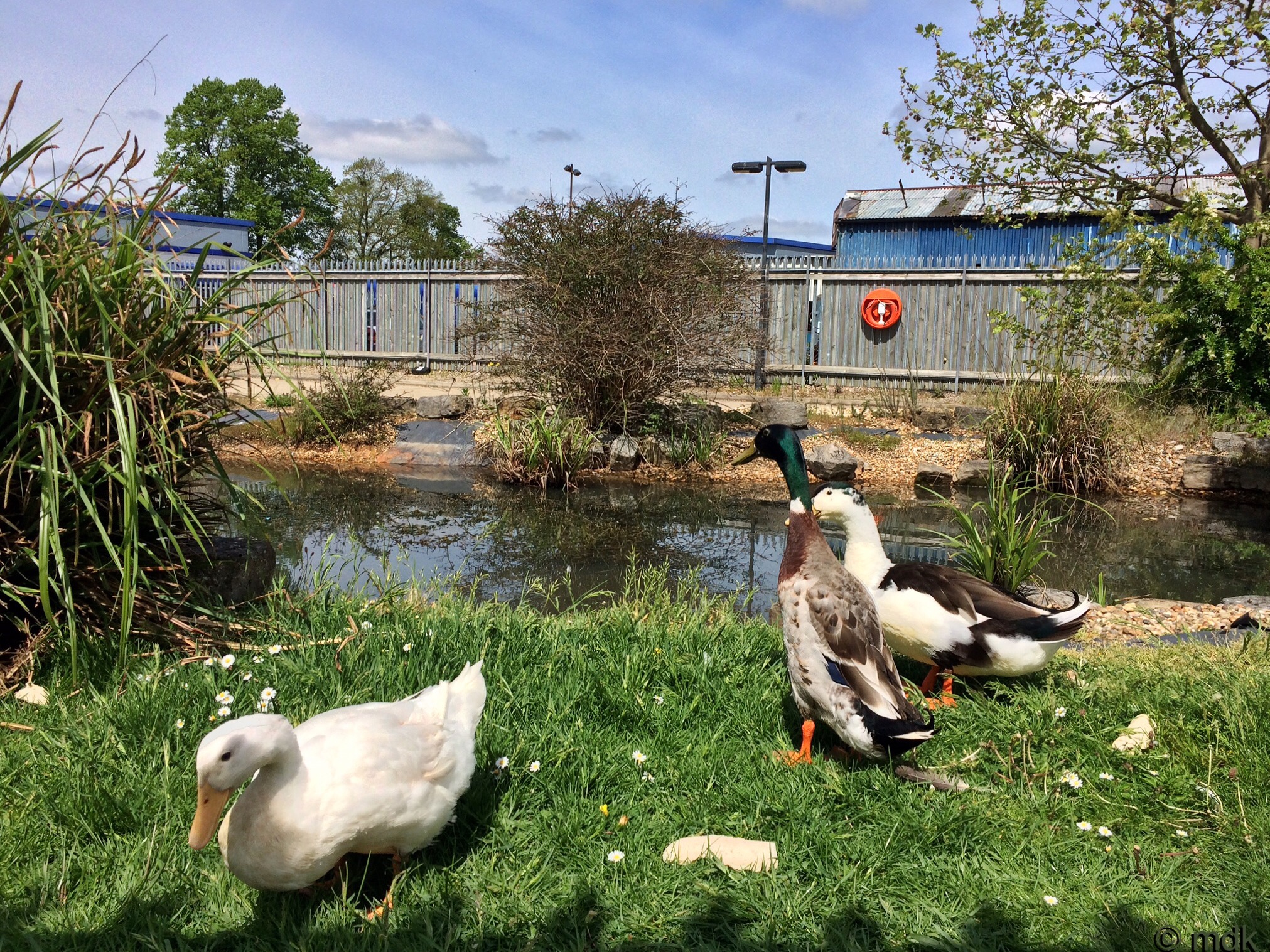 At first it seemed Billy Mather’s mural was going to be another disappointment. As far as I could see there was nothing on the walls or the fence of the social club, despite the blurb telling me the mural was supposed to be permanent and the art trail’s legacy. Briefly I thought about just walking home and forgetting the whole thing but I’m made of sterner stuff so I decided to keep looking. Behind the building, on Lumpy Lane, I finally struck lucky. 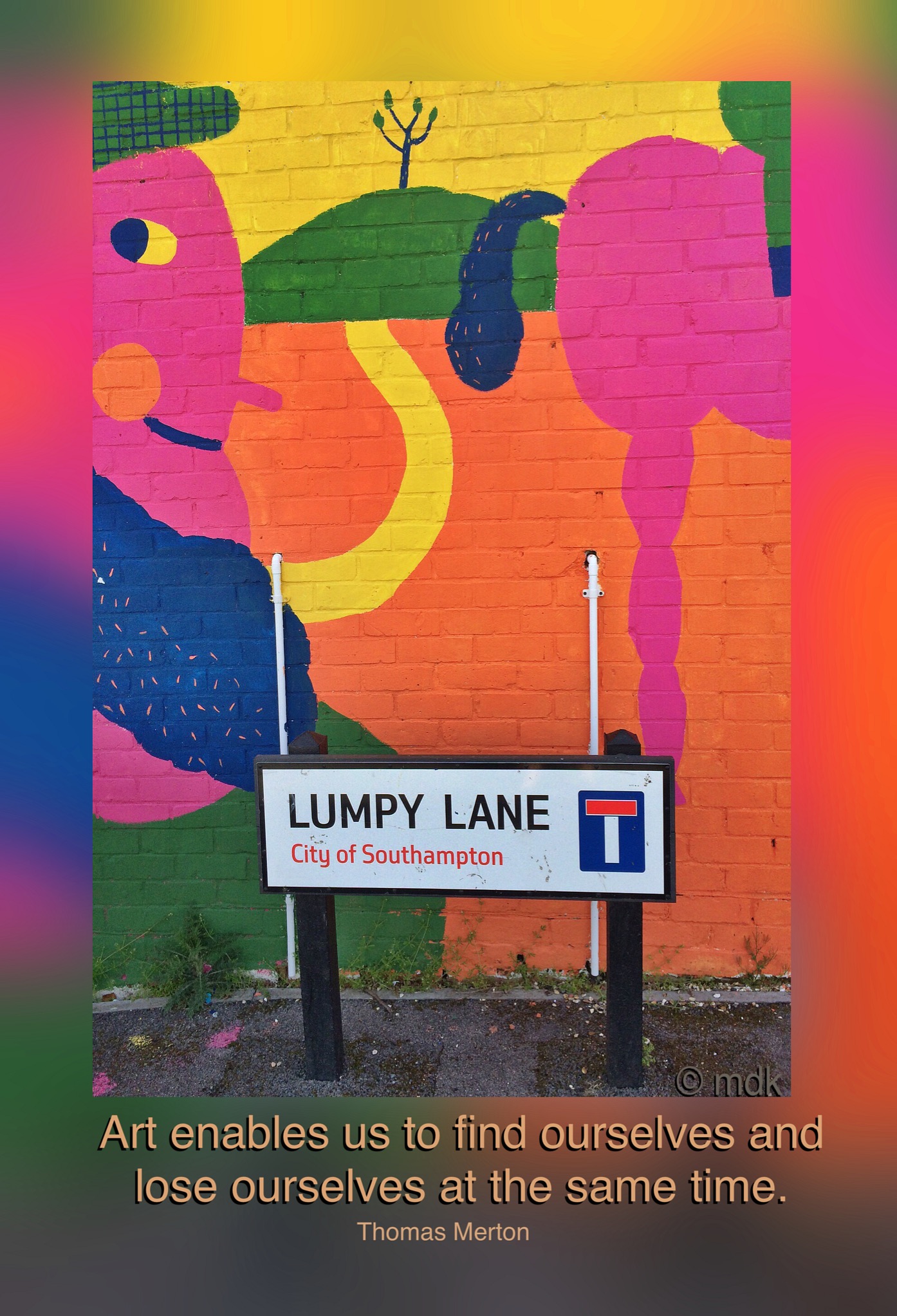 It may not have been quite what I was expecting but the painted wall was certainly bright. A stylised farmer, horse and rider and pink clouds in a yellow sky over orange fields celebrated Northam’s farmland history. I sat on a neaby wall and contemplated it for a while. 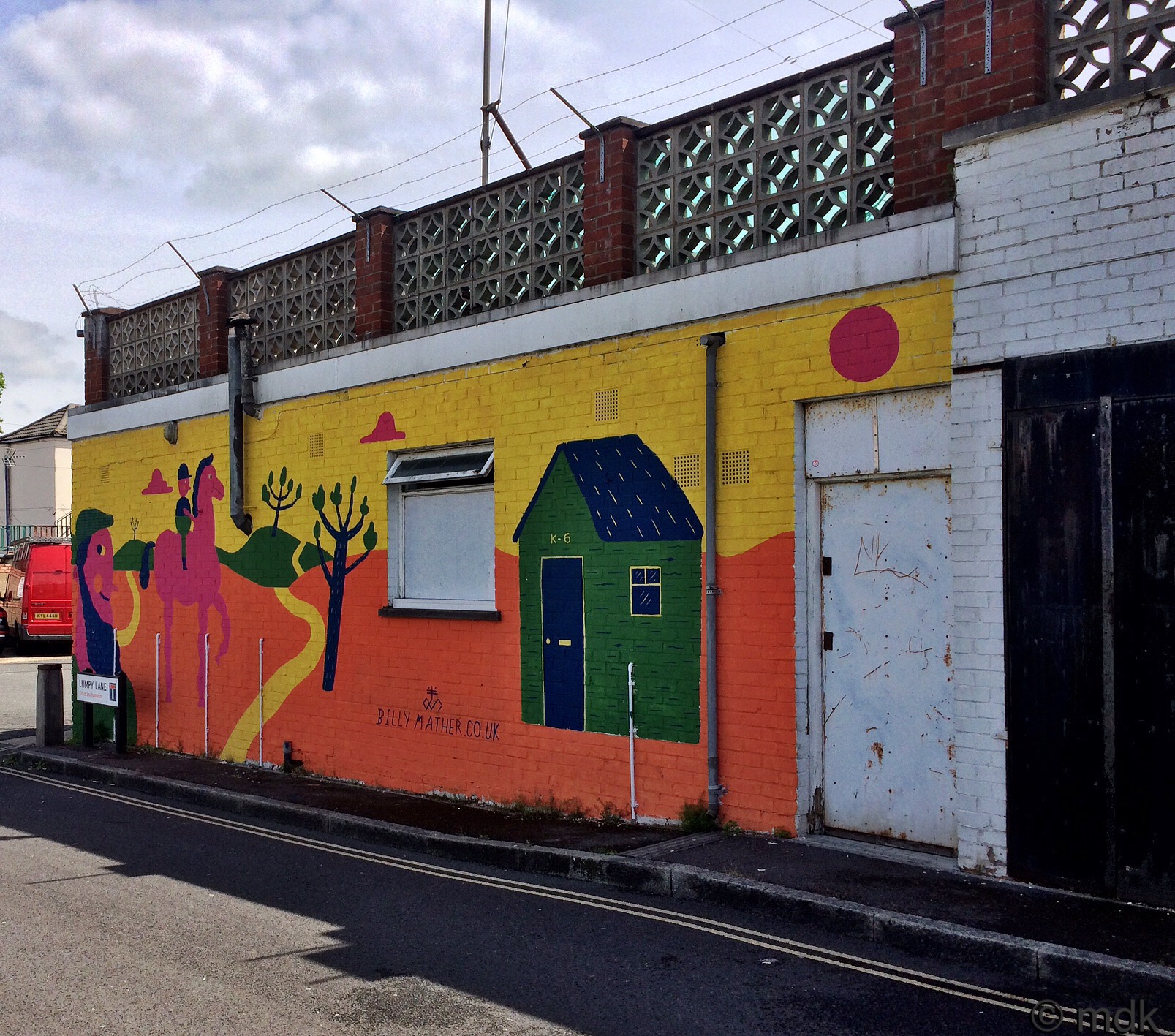 The next exhibit would take me off the homeward route onto the boardwalk. Apparently there were photographs of everyday places and spaces along there somewhere. Even if there weren’t it was a familiar route and walking along the river in the sun is no hardship. On the way I peered through the fence at the progress on the demolished TV Studio site. Foundations have been dug since I last looked. A man on a digger waved at me and called out “Over here! Take my photo,” so, with a wave back, I did. 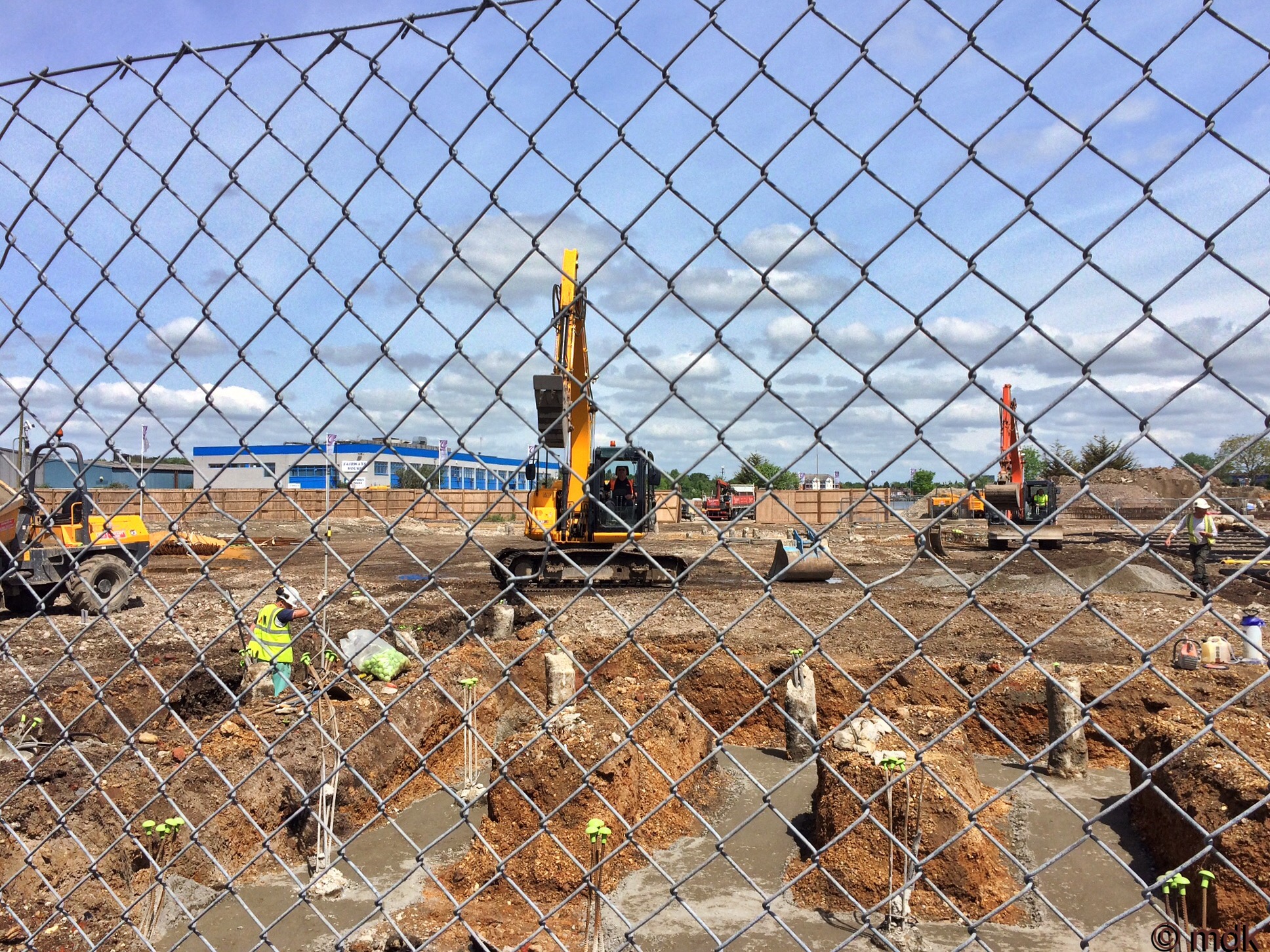 On the river path, the swans looked up as I passed but quickly realised I was the woman who never has any bread. It felt a little like a walk to work, looking at the half submerged hippie ship, the red boat, Dutch Courage, and the Millennium Flats in the background. Thankfully there’d be no office or headset at the end of it though. 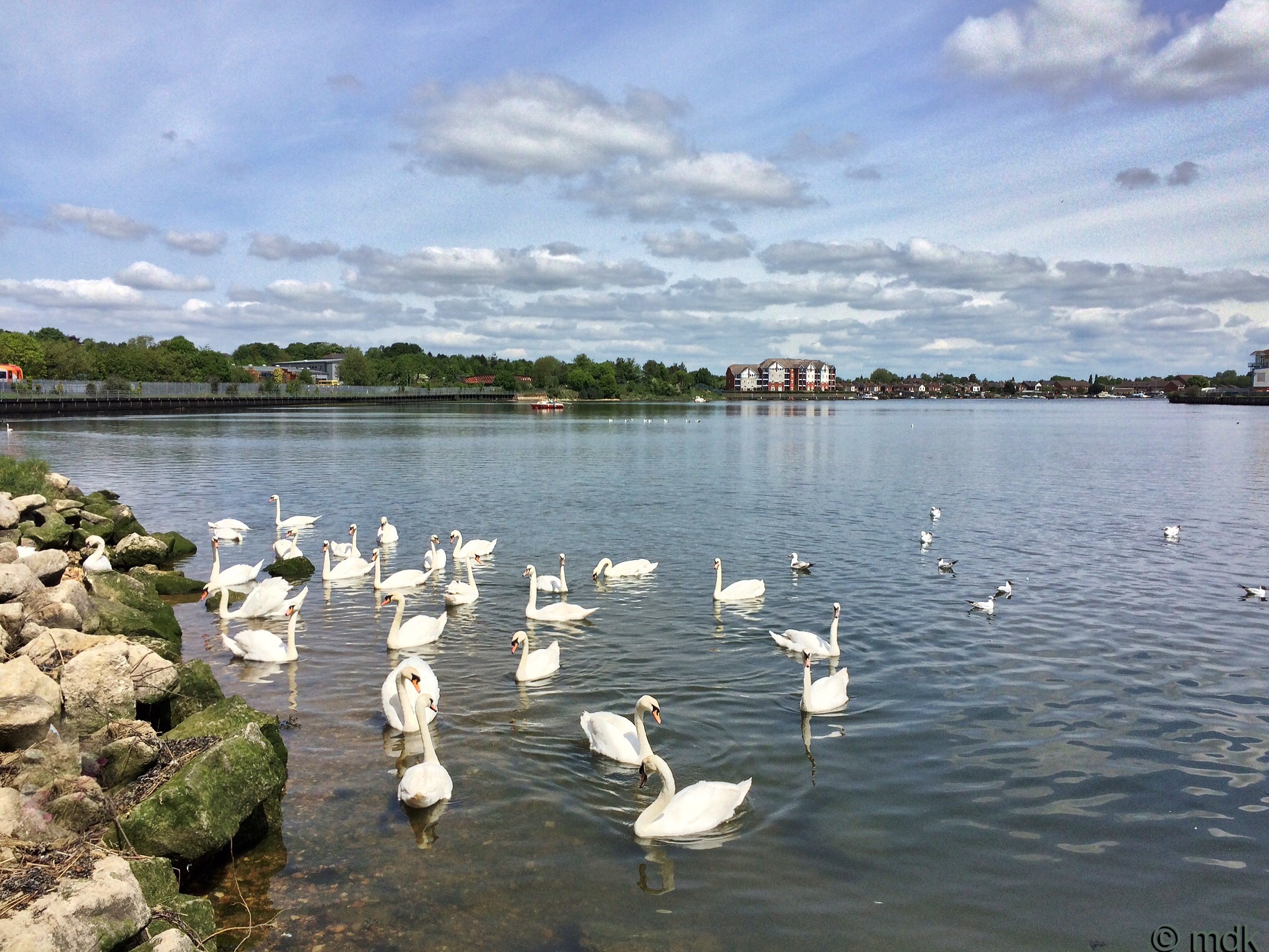 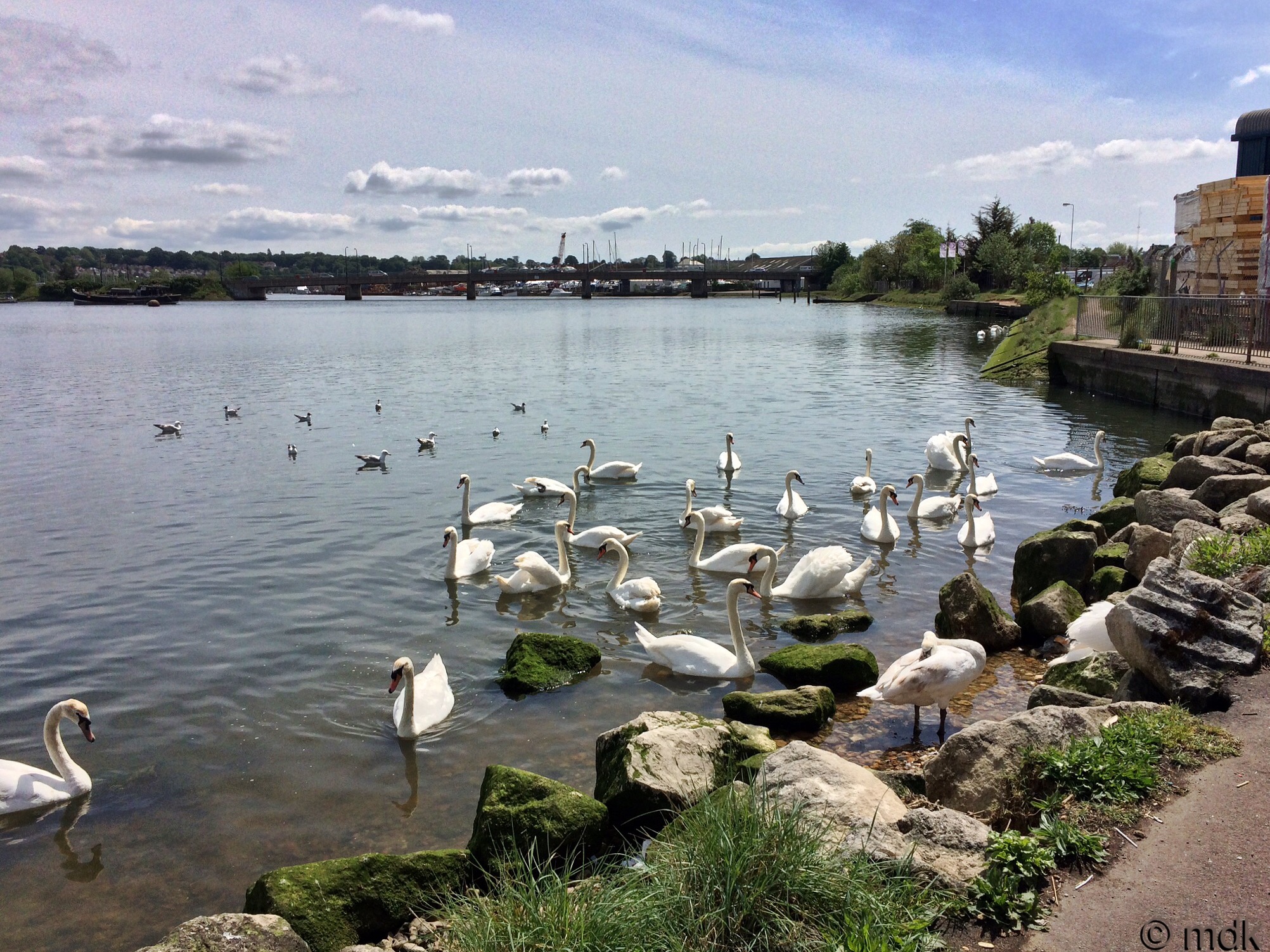 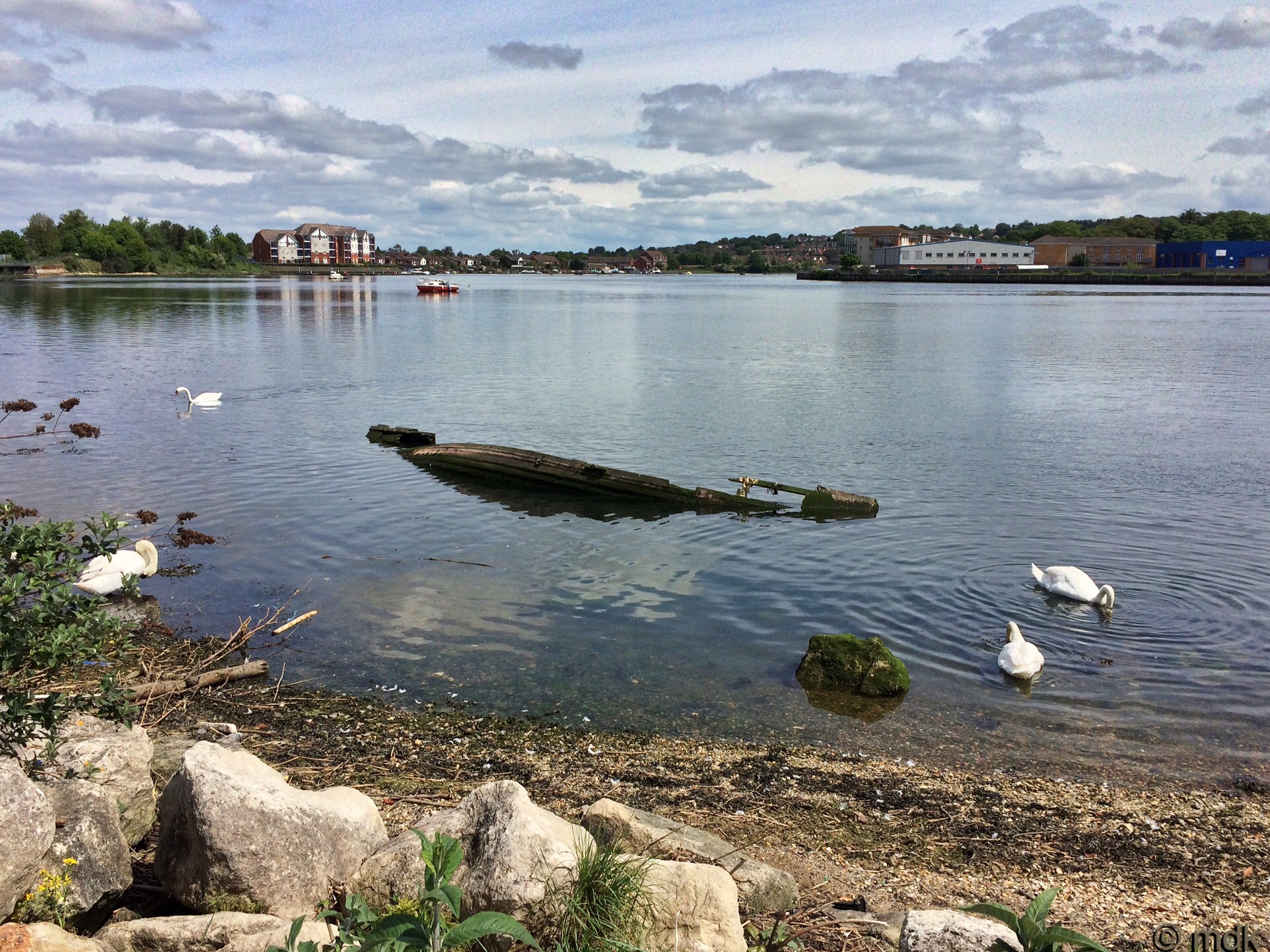 There were ragwort and red tinged oak leaves brightening the boardwalk but I was too intent on looking for the photographs to stop for them. As far as I could see the railings, where I’d expected them to be, were bare. Perhaps, like the bike, they were gone? 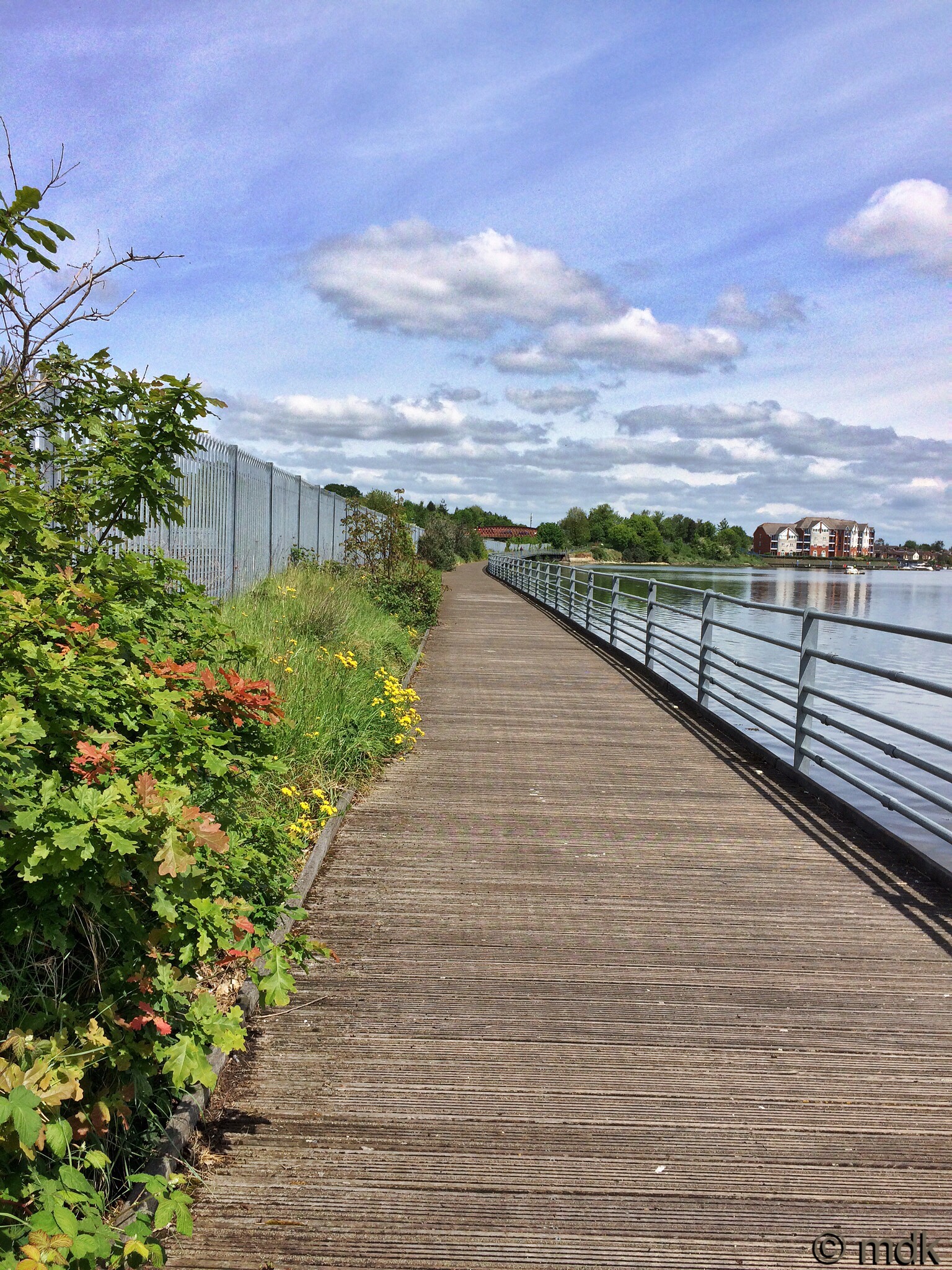 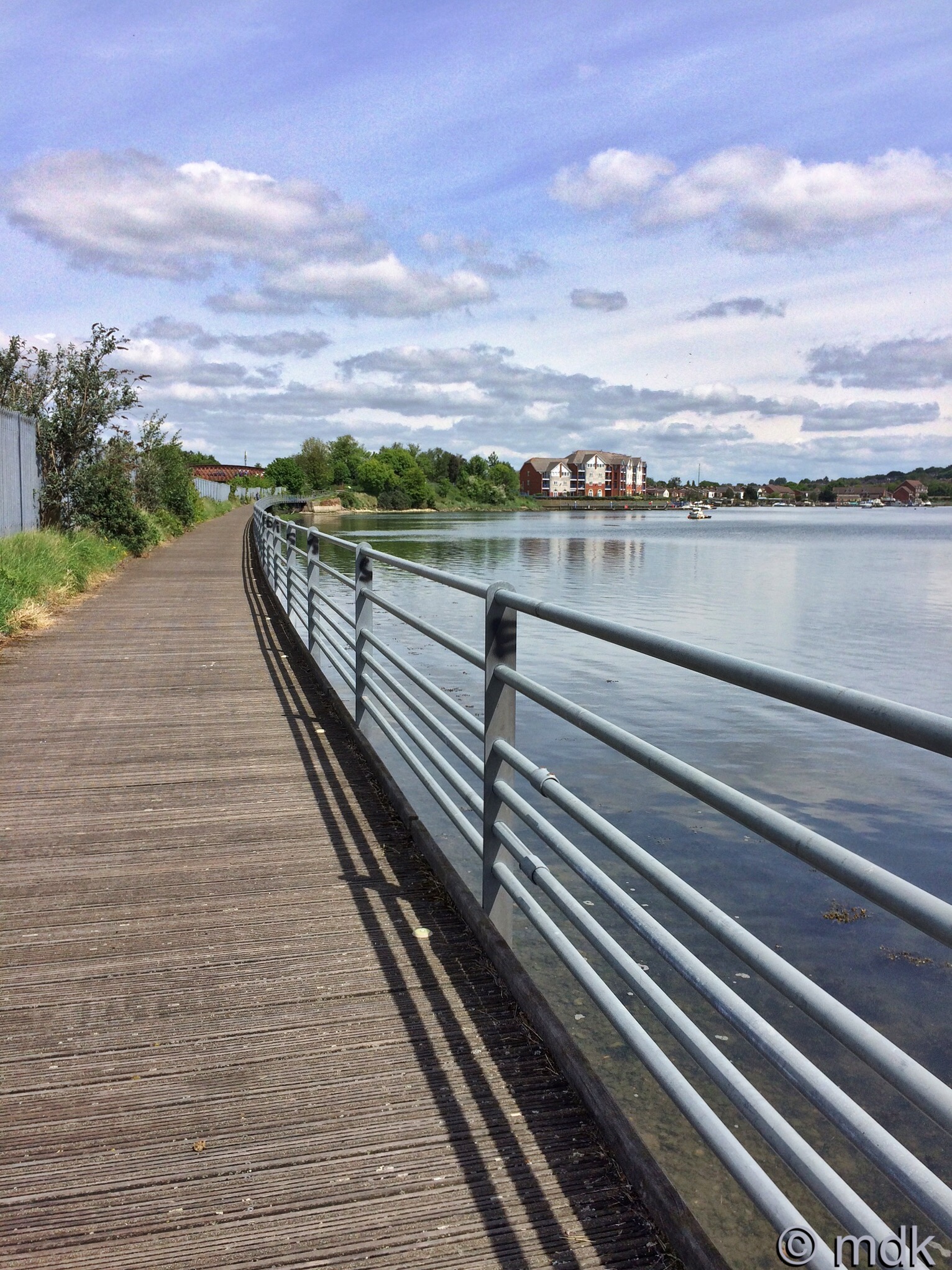 Just over half way along I spotted them, hanging high on the fence between the boardwalk and the railway line. In fact they were so high I couldn’t see them as well as I’d have liked. Taken by Tom Westbury, they were scenes from around the city, much like the ones in the K6 telephone box gallery. There were the dinosaur machines from the cement works I used to pass every morning, but without the sunrise backdrop, the building work on Western Esplanade I’d photographed myself earlier and the Car Spa we use these days. While I was trying to take pictures a train sped past, frightening me half to death. 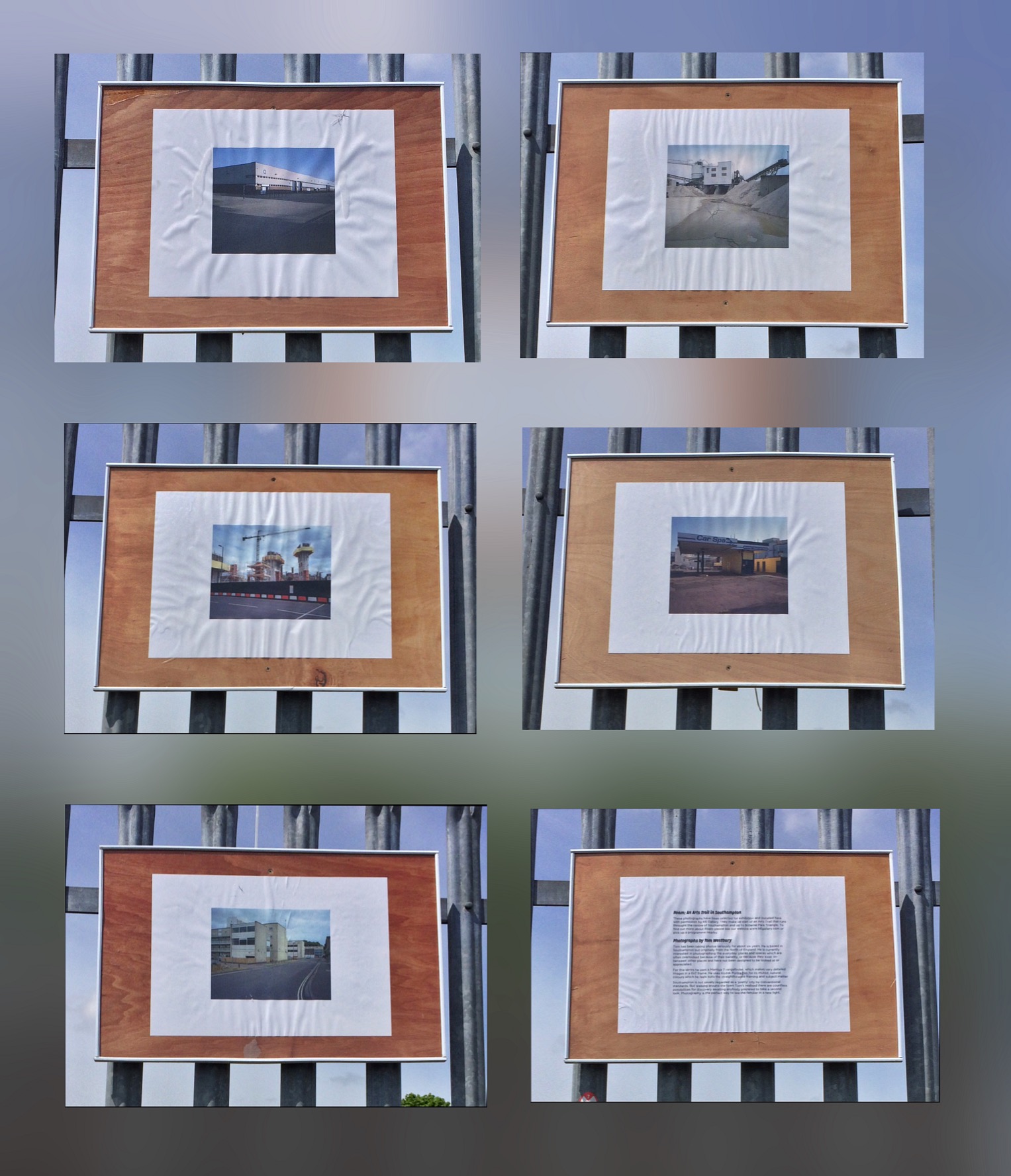 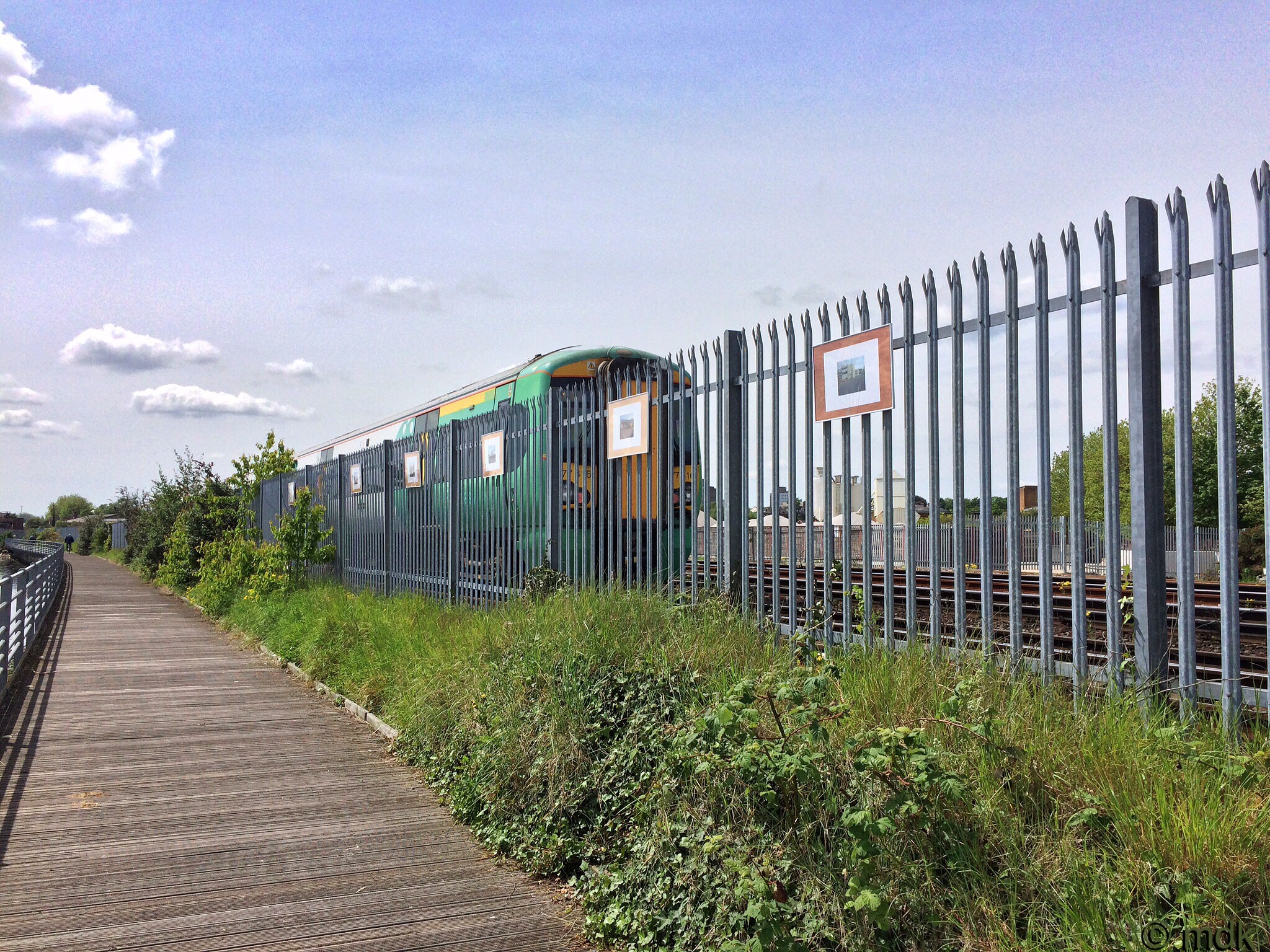 Composing myself I carried on. A yellow bike was leaned against the railings near the end of the boardwalk. This walk seemed to be filled with bikes, apart from the one I really wanted to see. Then it was on, past the Millennium Flats and the half empty moorings there, retracing my old walk home from work steps. 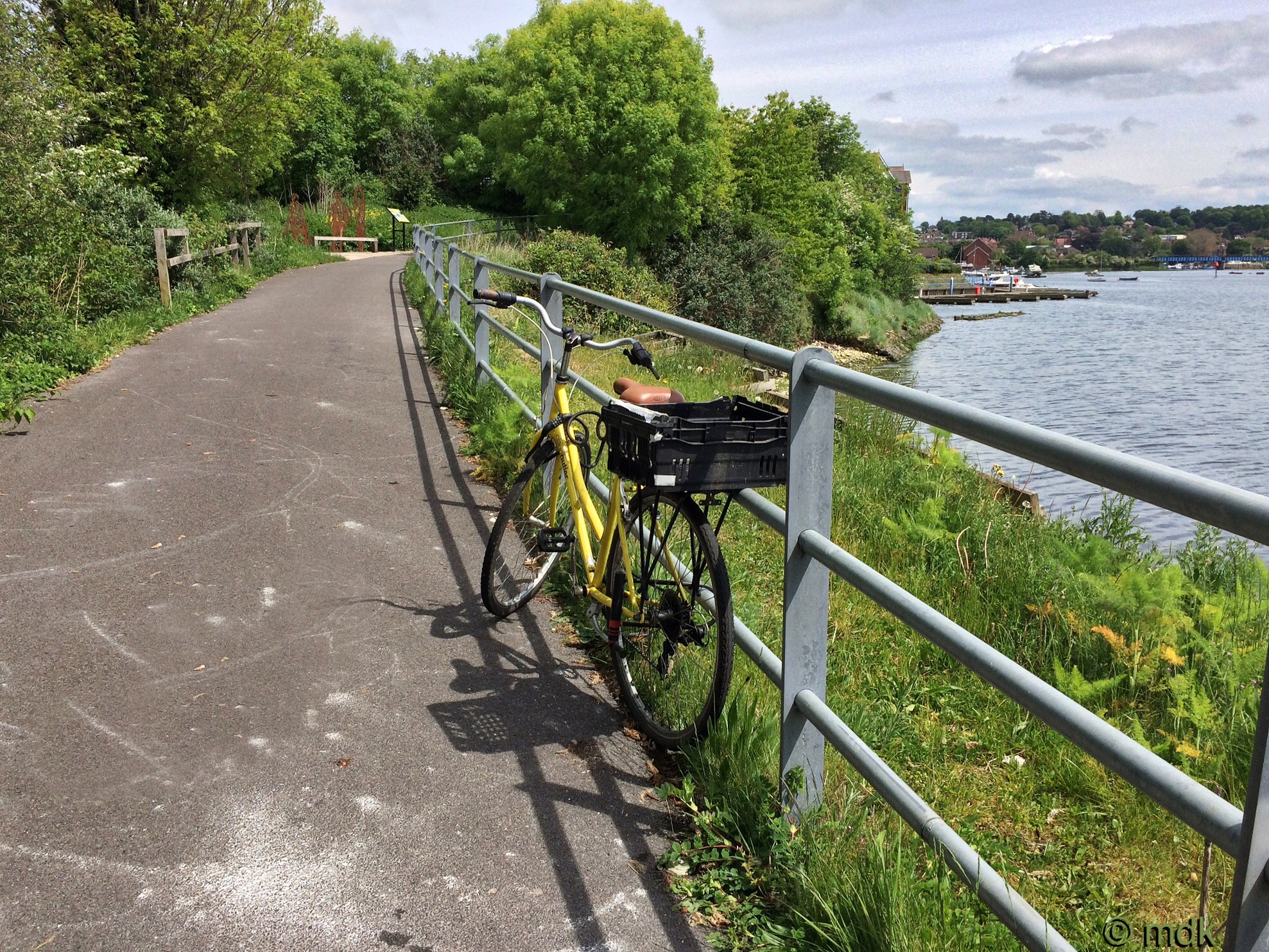 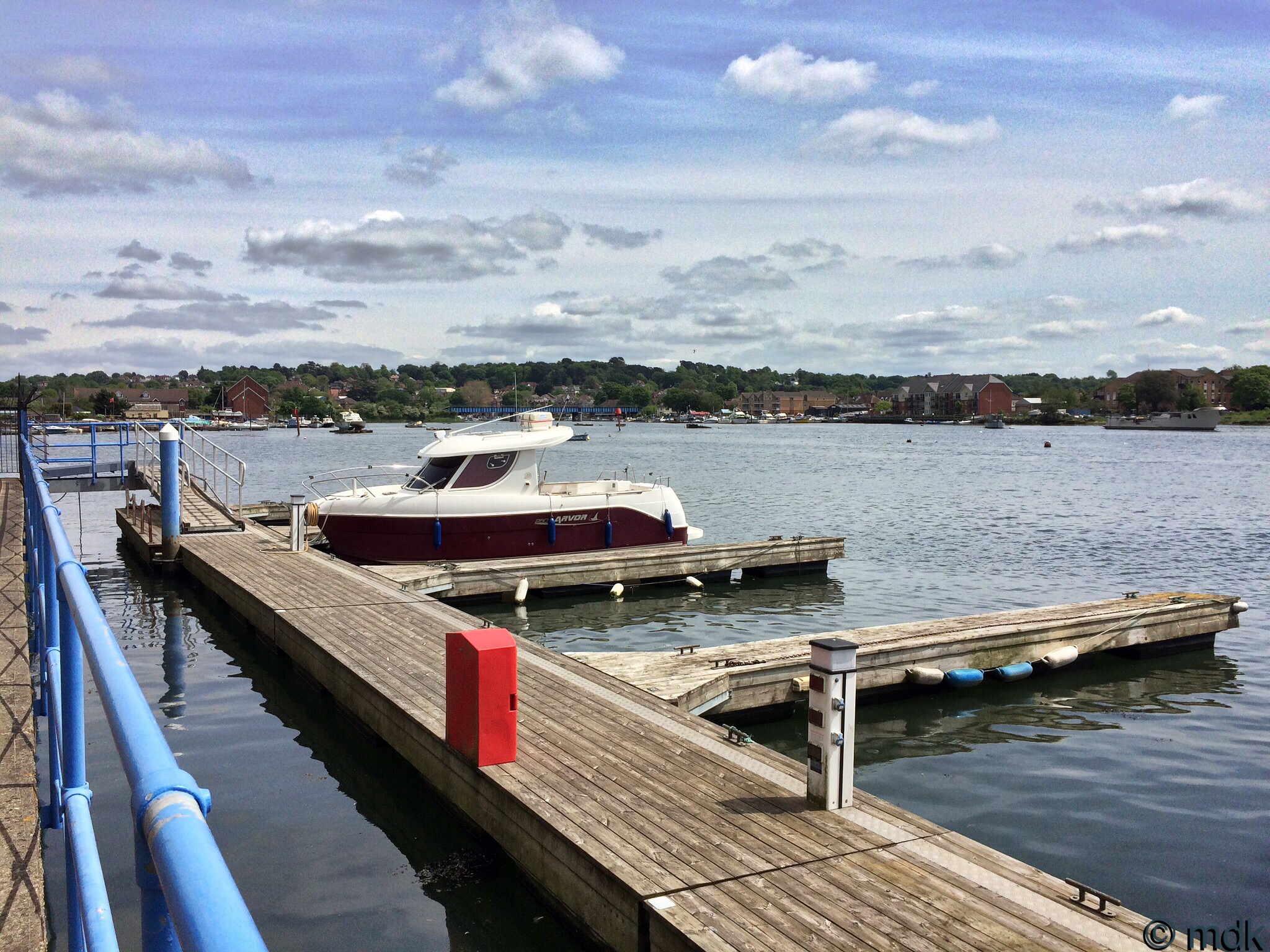 The next exhibit was on Collier Close, or so the leaflet said. Memory told me this was one of the side roads I’d be passing and, sure enough, right before the railway bridge, I  came to it. The detour was well worth the effort. First there was an odd, Dutch style, house on the waterside to make me smile. In front of it was the notice board I was looking for with a poem about isolation by Ashley David John. 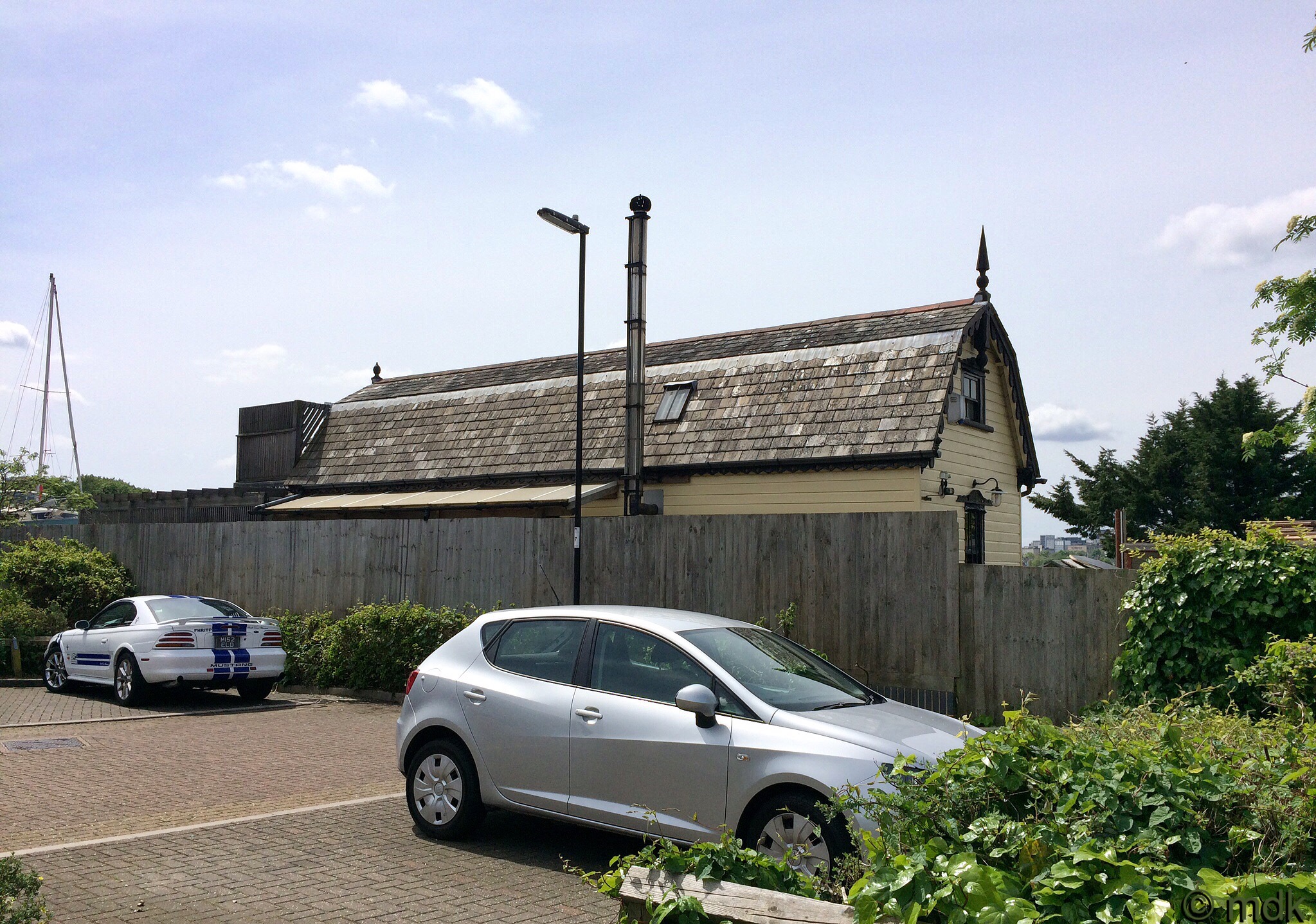 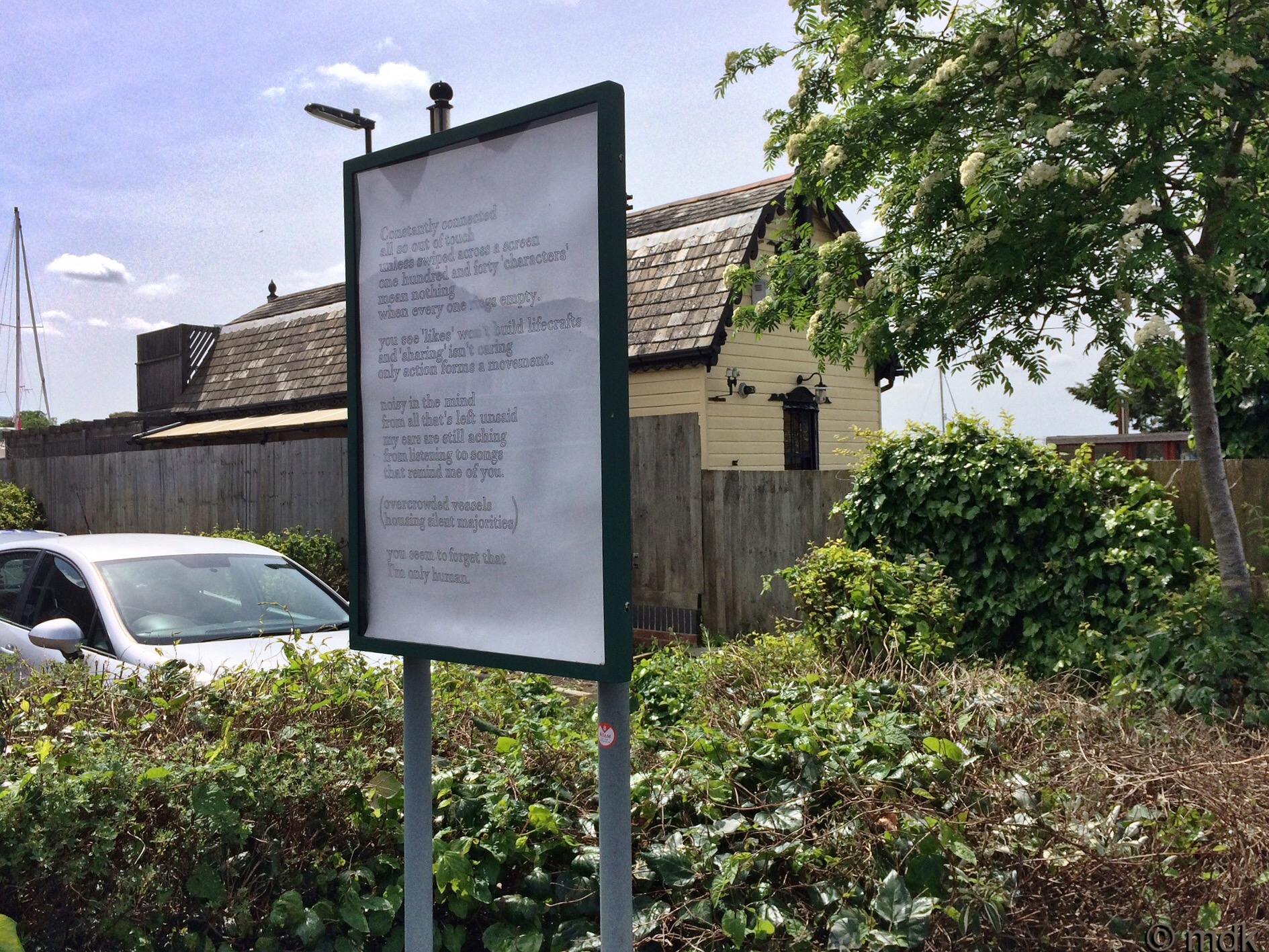 I had an idea that the side streets looped along the waterside back to the road I’d left so, at the risk of getting lost and having to back track, I walked between the buildings. This turned out to be a good plan. I found myself in a small park I’d never seen before, right on the river bank with a view of the blue railway bridge and the backs of the houses on Vespatian Road. A woman was sitting on a bench in the sun and I said hello as I passed. It seemed a lovely quiet place to enjoy the river and I’m sure I will come back. 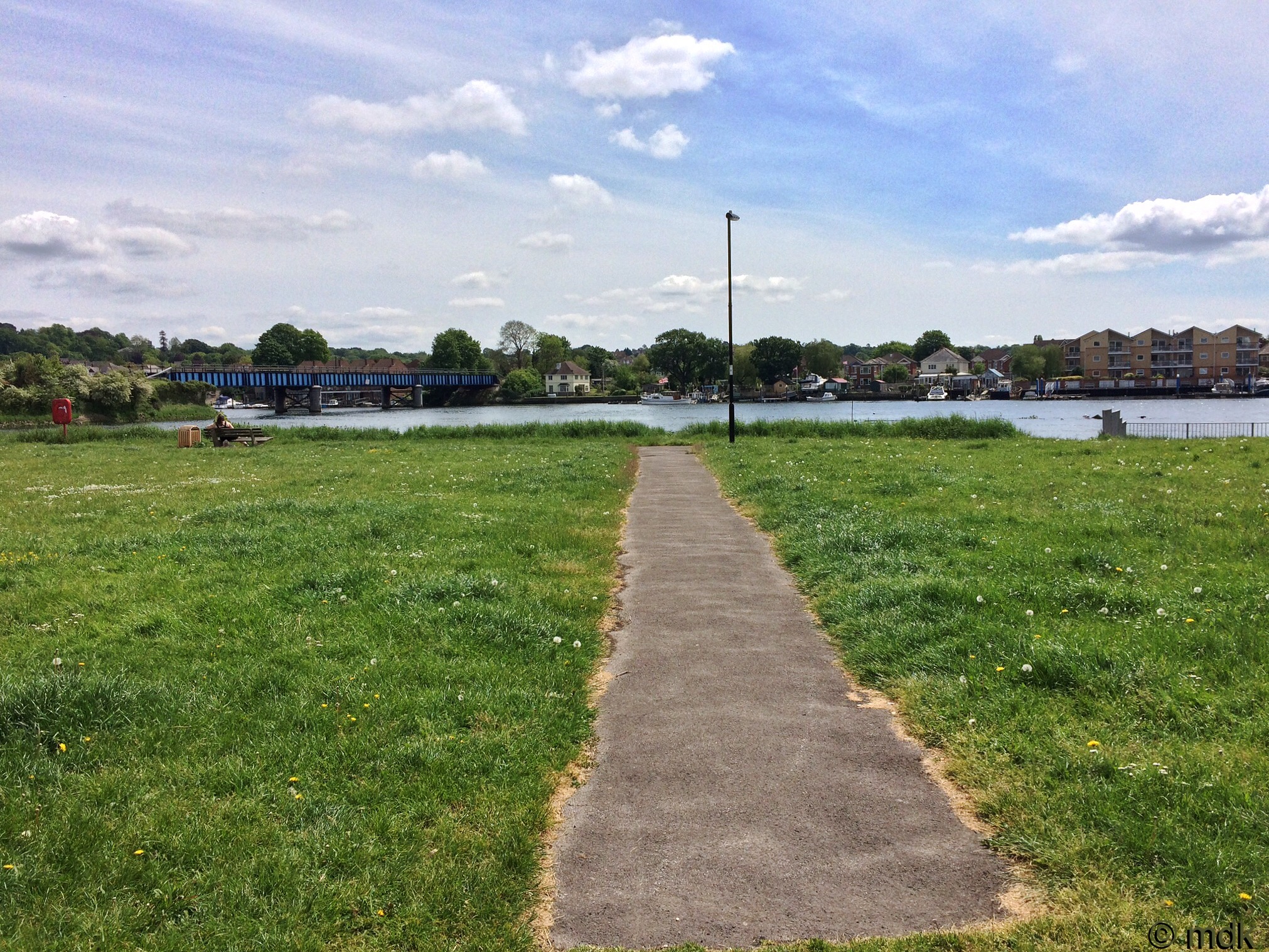 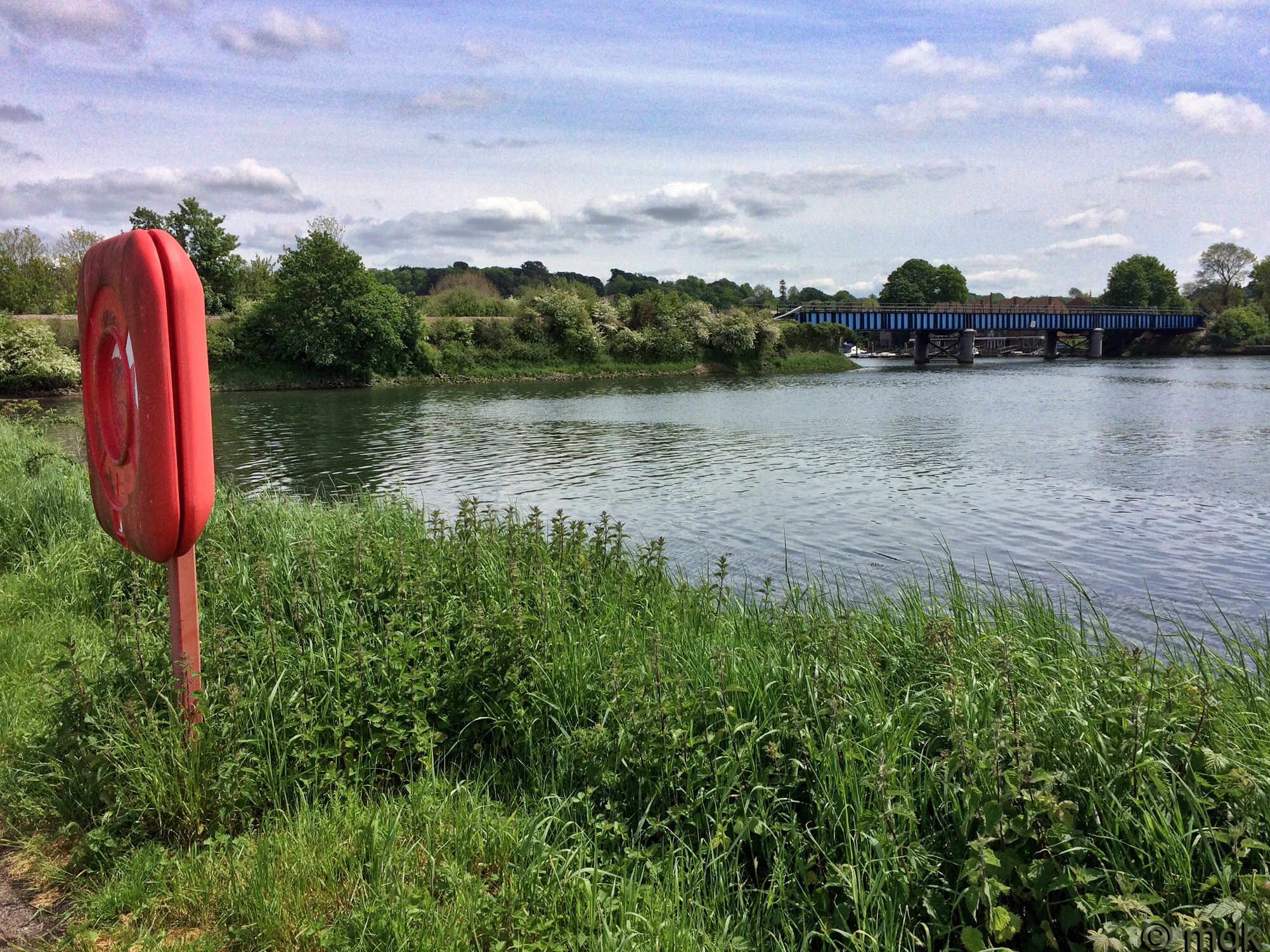 The art trail and my walk were drawing to a close. There were just three more exhibits to see and the next was best seen from Cobden Bridge, according to the blurb. From what I could make out it was a banner, called Seachange, and it was by Isabella Rose Martin. It turned out to be easy enough to spot the blue banner with the words Everything Carried Out To Sea in white, tied to the railings of the flats on Whitworth Crescent. 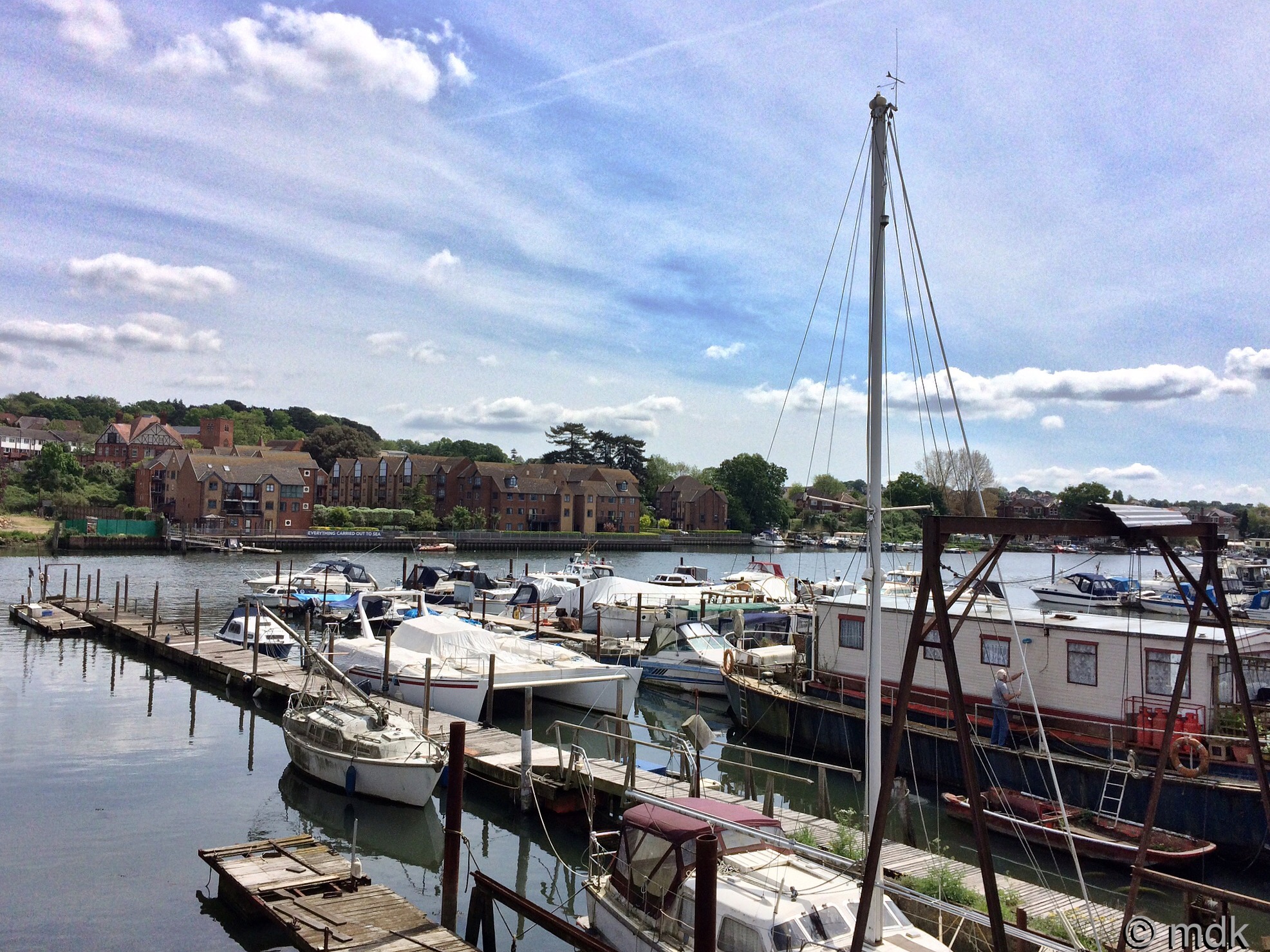 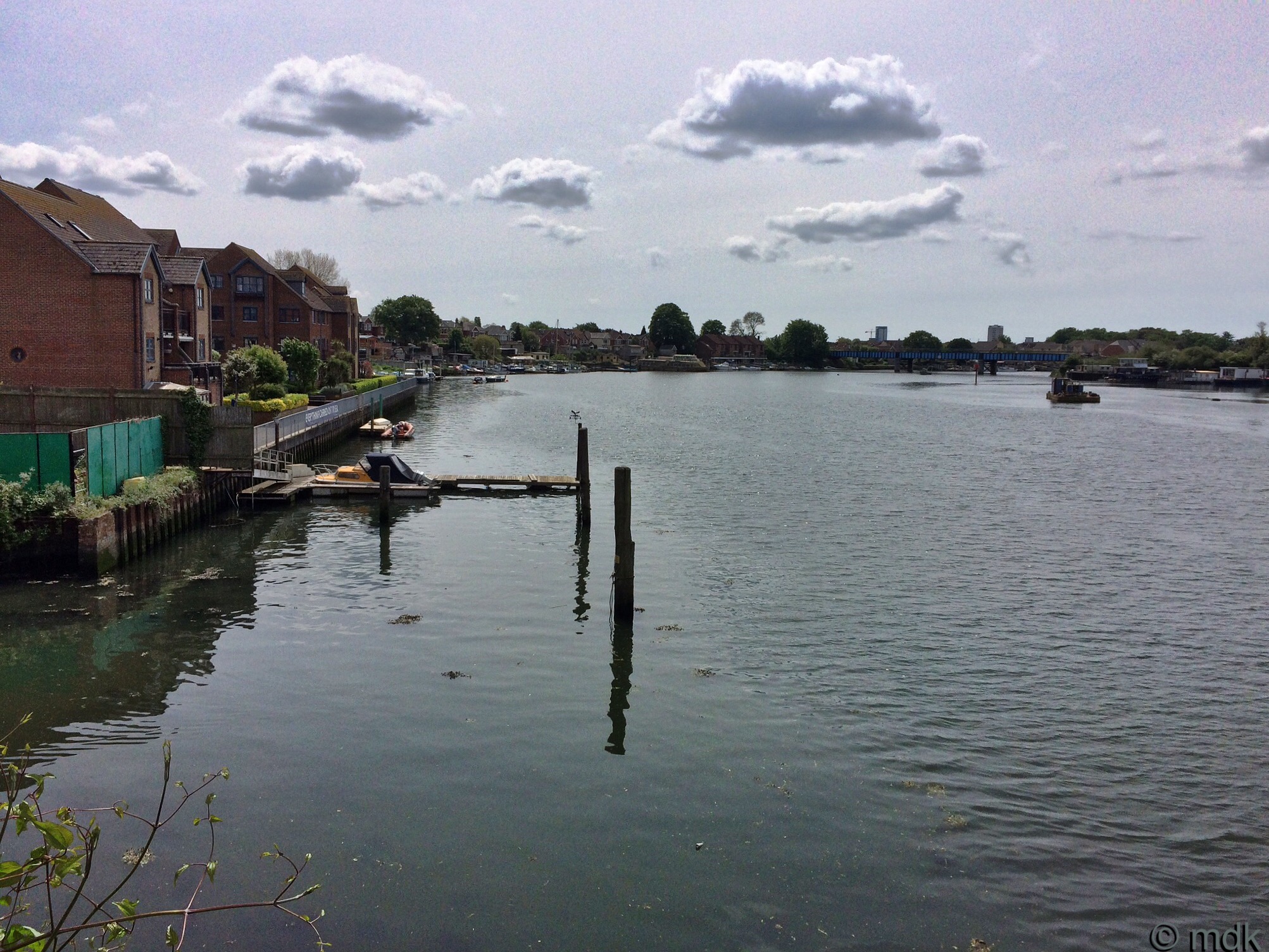 I was looking forward to the next exhibit, mostly because it was supposed to be right next to the Songbird Cafe. For once it wasn’t coffee I was thinking about though. The cafe sells the most amazing ice cream and, after walking for hours, I felt I deserved one. Kirsty Smith’s posters in the alley between the cafe and Graham Cotton Bakery were interesting but the ice cream was more so. While I waited to be served I looked through the window at them. 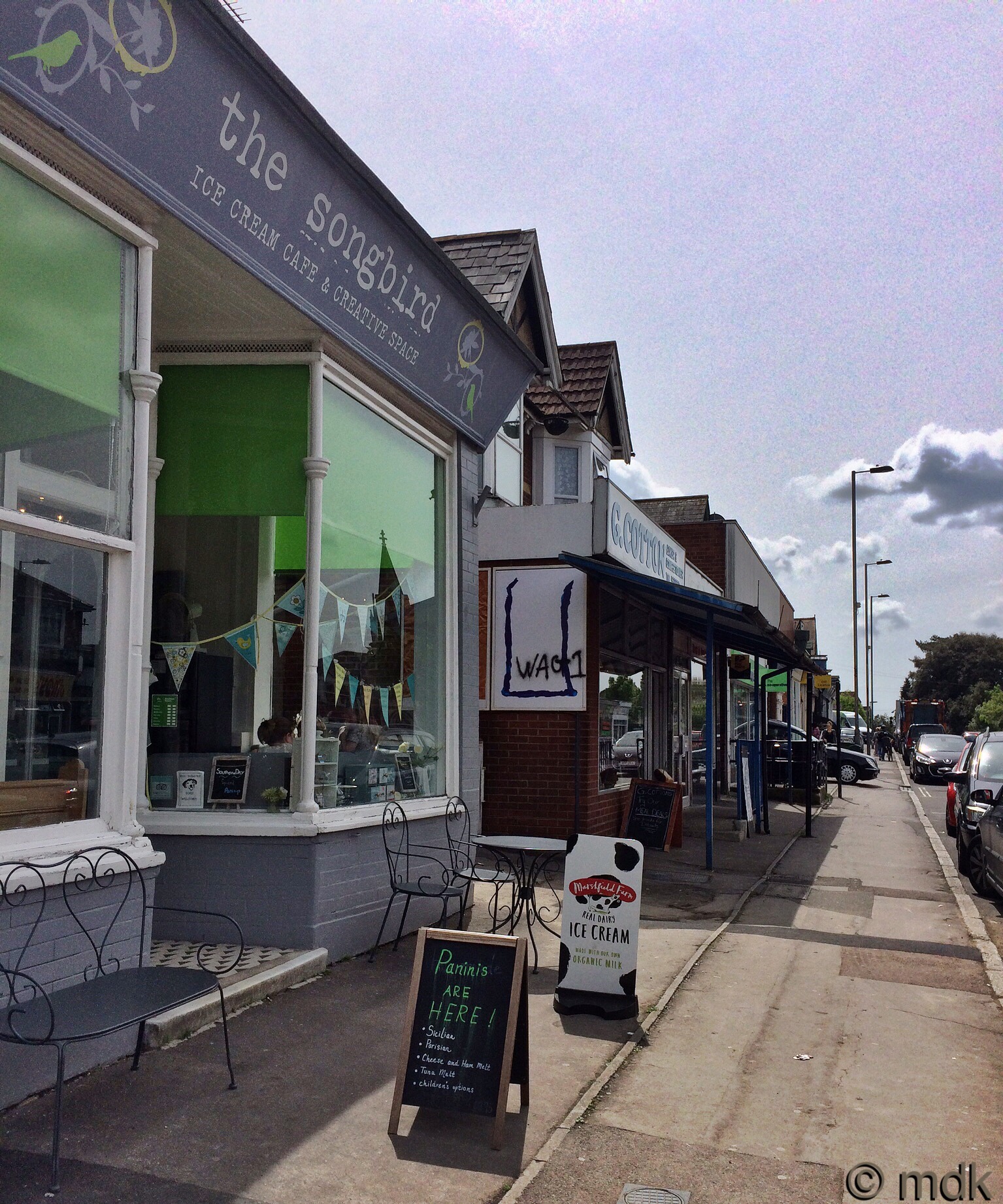 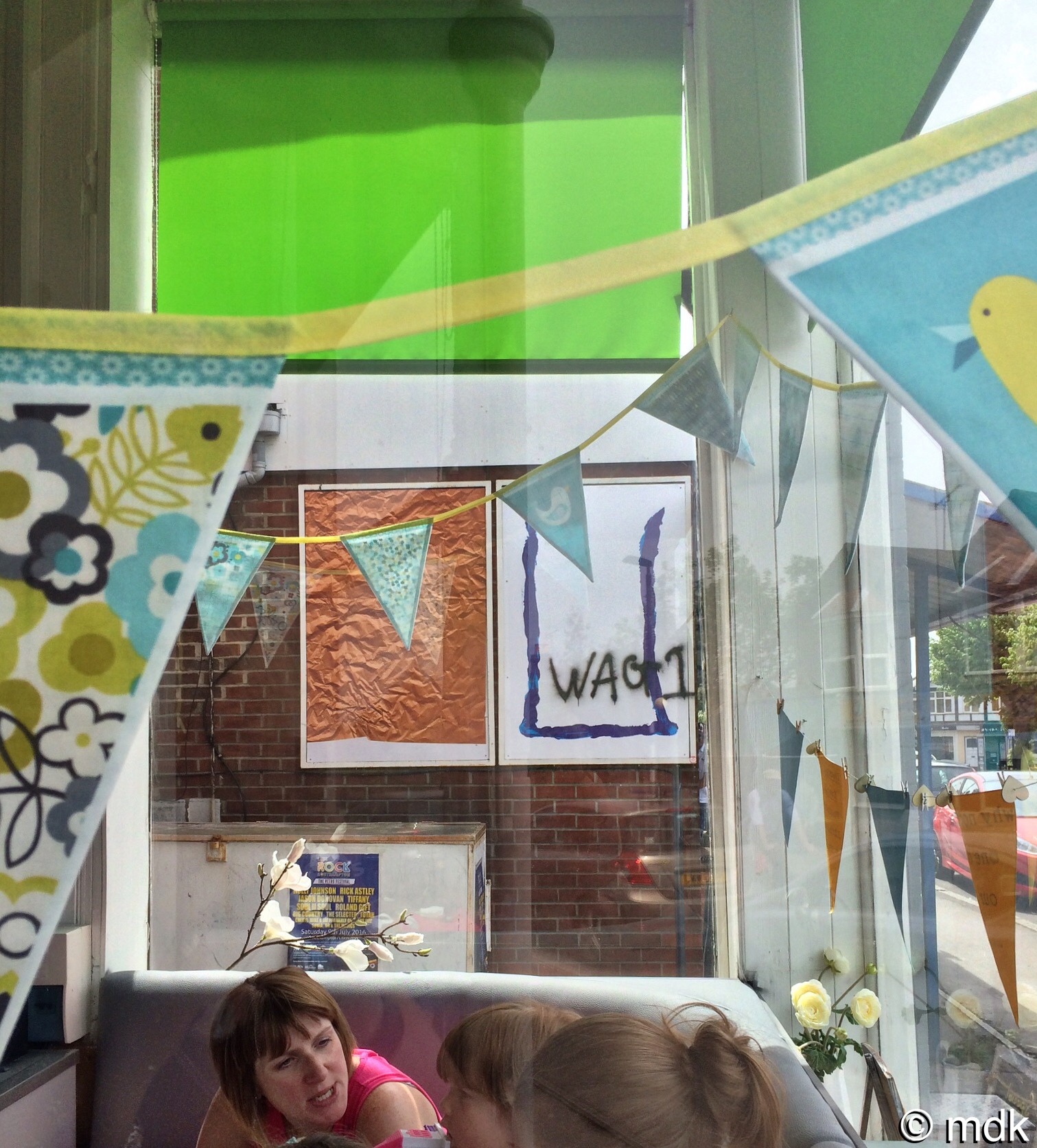 One looked like a crumpled sheet of copper, the type of thing you can look at for ages and see birds and animals that aren’t really there. The other was a blue U shape. Someone had tagged it, at least I think they had, it may have actually been part of the work. Enjoying my ice cream I tired to make up my mind. 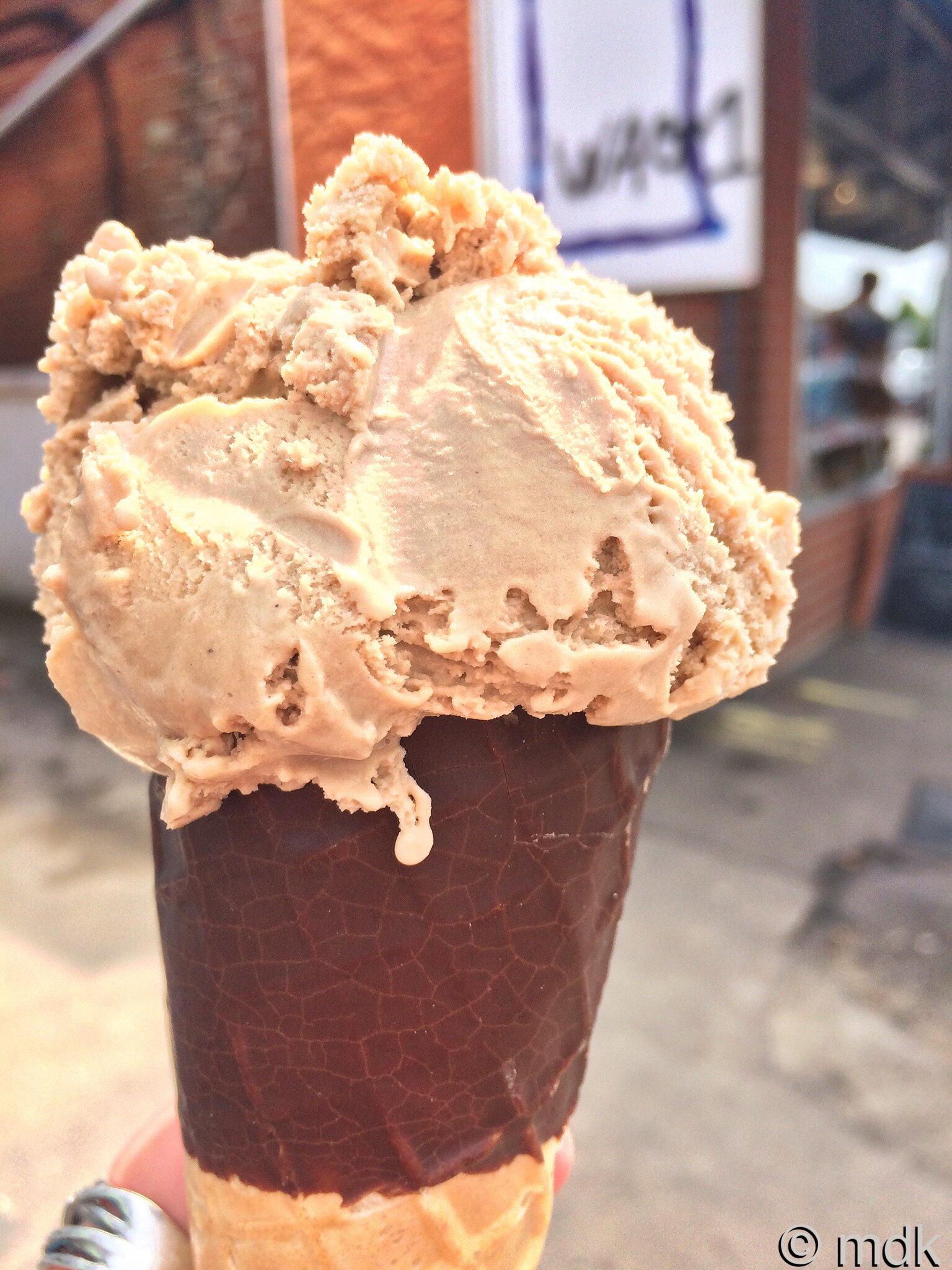 Still thinking about it I walked right past the final place on my list. In the end it didn’t matter because, when I realised my mistake and went back to the Butcher’s Hook pub, it was closed. I stood in the doorway and peered through the window trying to see Alys Scott Hawkins illustrations of local figures and landmarks. All I saw was my reflection looking back at me. 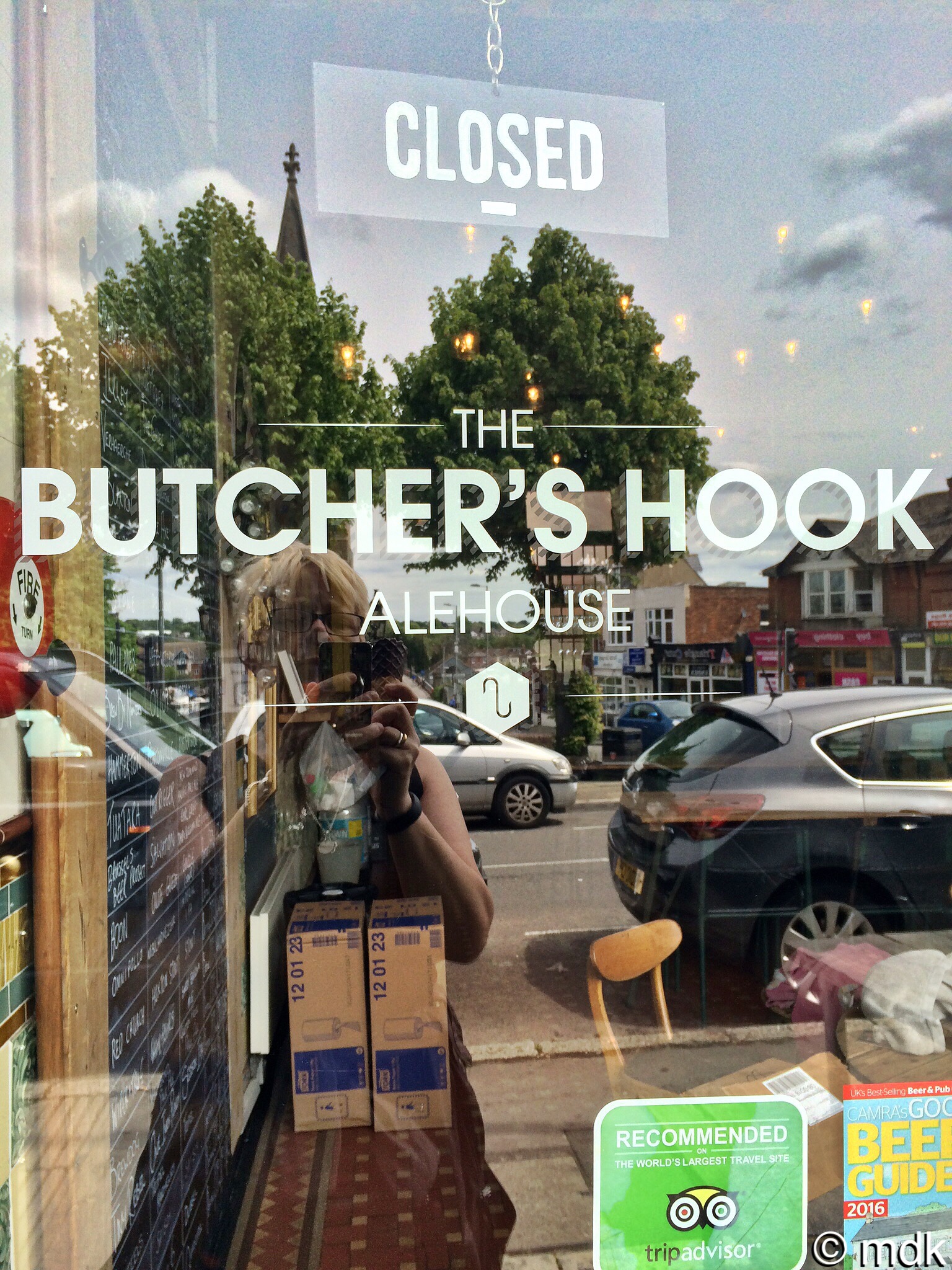 On many levels the Roam Art Trail hadn’t quite lived up to my expectation. That is not to say the work or the idea was bad. In fact I’d enjoyed most of what I’d seen, even if the white bike had disappeared and some things proved harder to find or understand than I’d hoped. Art is what you make of it and I’m glad there is a lot of accessible public art in the city. Best of all I had a lovely sunny walk through parts of the city I might otherwise not have seen and that is probably what a good art trail is all about after all. 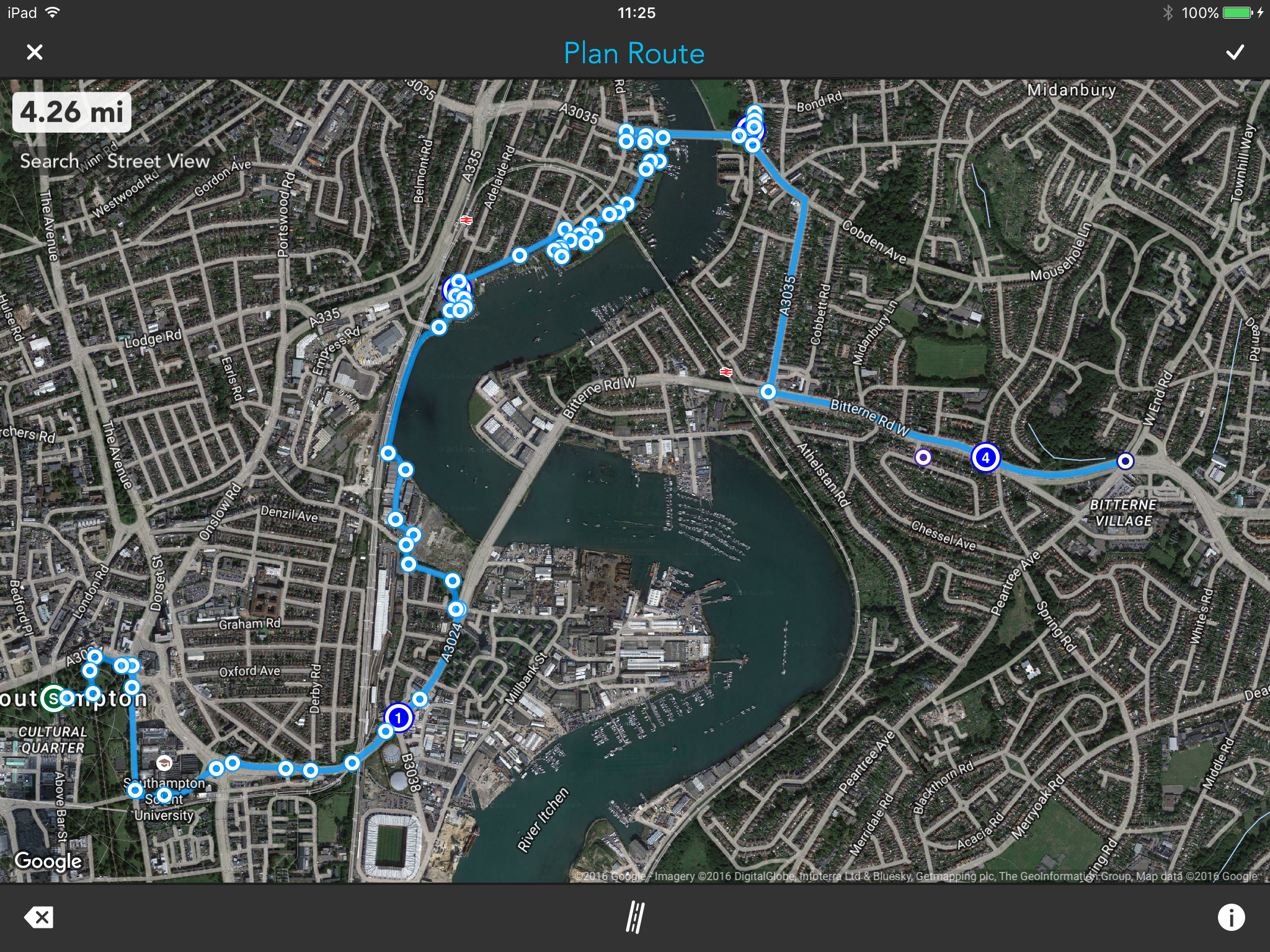