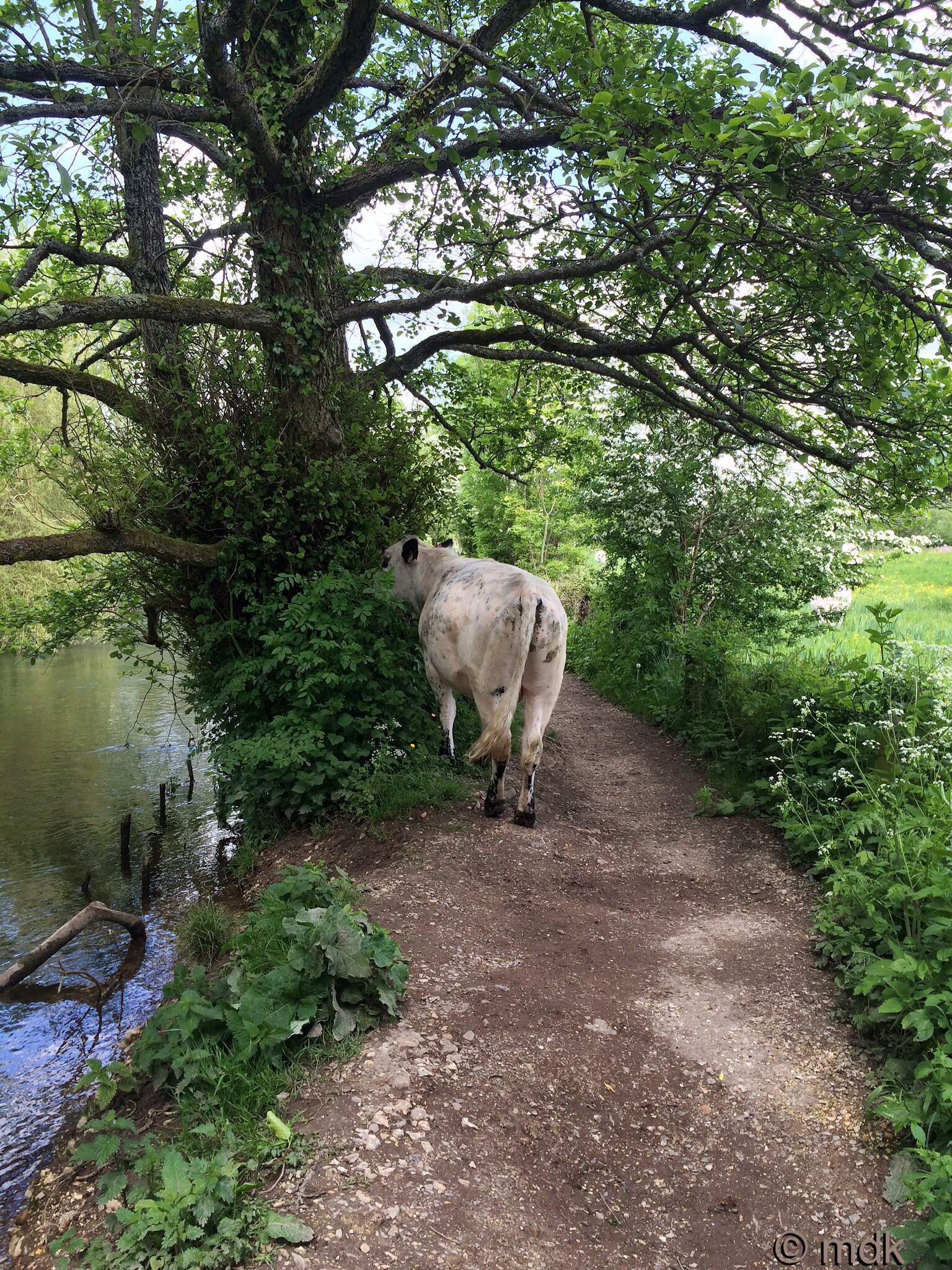 So there we were on the Itchen Navigation somewhere between Shawford and Compton Lock with a bull blocking the path ahead. Just as we were about to turn around and walk back to Shawford to catch the train home the bull took a few steps, reaching for some more succulent leaves. Suddenly there was a gap between his huge posterior and the edge of the path. It wasn’t the widest gap and, being mostly filled by bull, it looked a little dicey but it was now or never.
I turned to CJ and said, “let’s go. Quickly but don’t run.”

With that I squeezed past, keeping as close to the hedge as I could. When I’d got to what I felt was a safe distance I turned to look for CJ, expecting him to be right behind me. He wasn’t. He’d hesitated and now the bull was on the move again. There was a still a gap though and, with a little urging from me, CJ scurried nervously through it. Seconds later the bull had turned and completely blocked the path again. Luckily, we were now both on the Winchester side of it so, with another photo just to prove it had really happened, we made our escape. 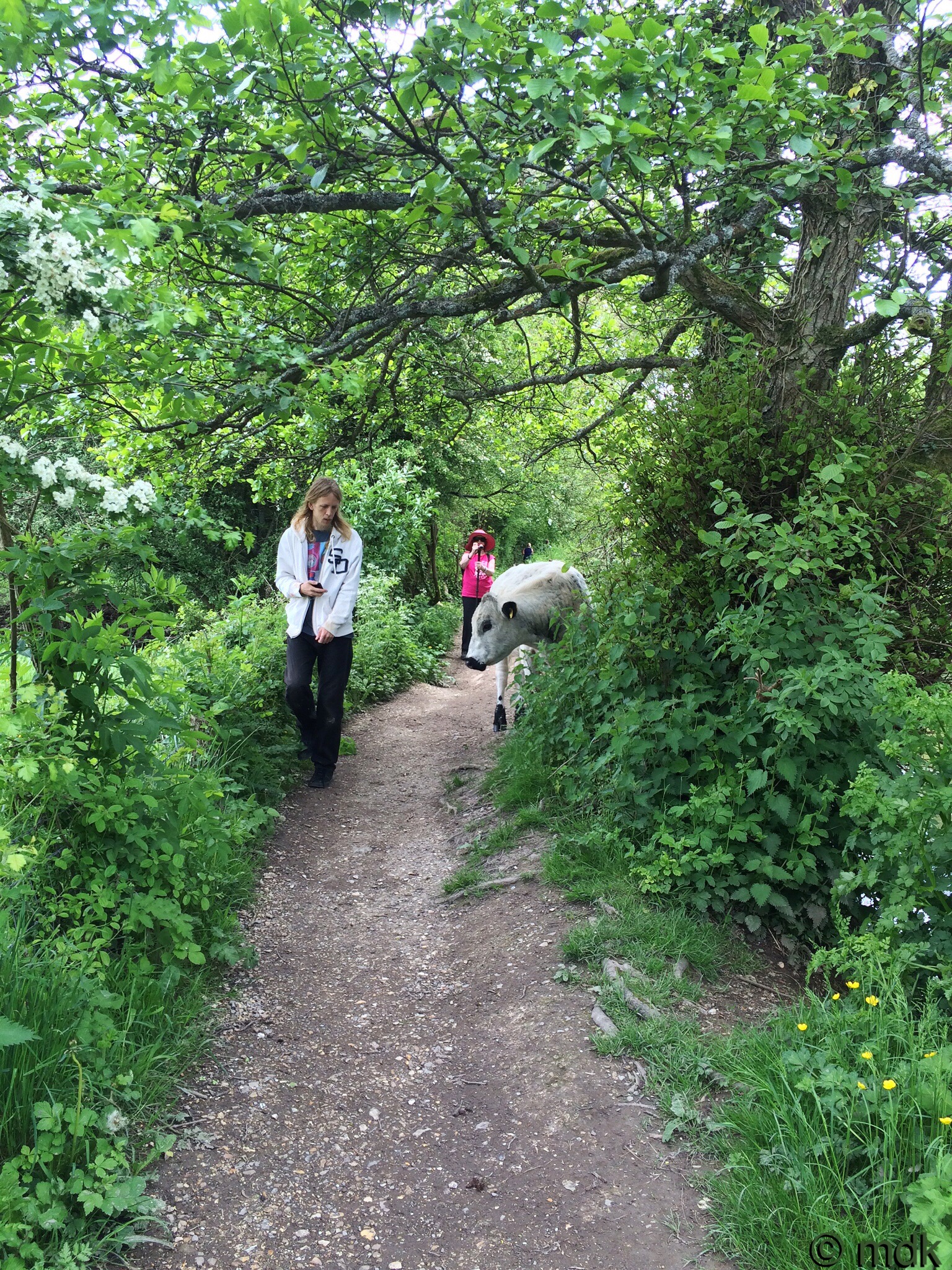 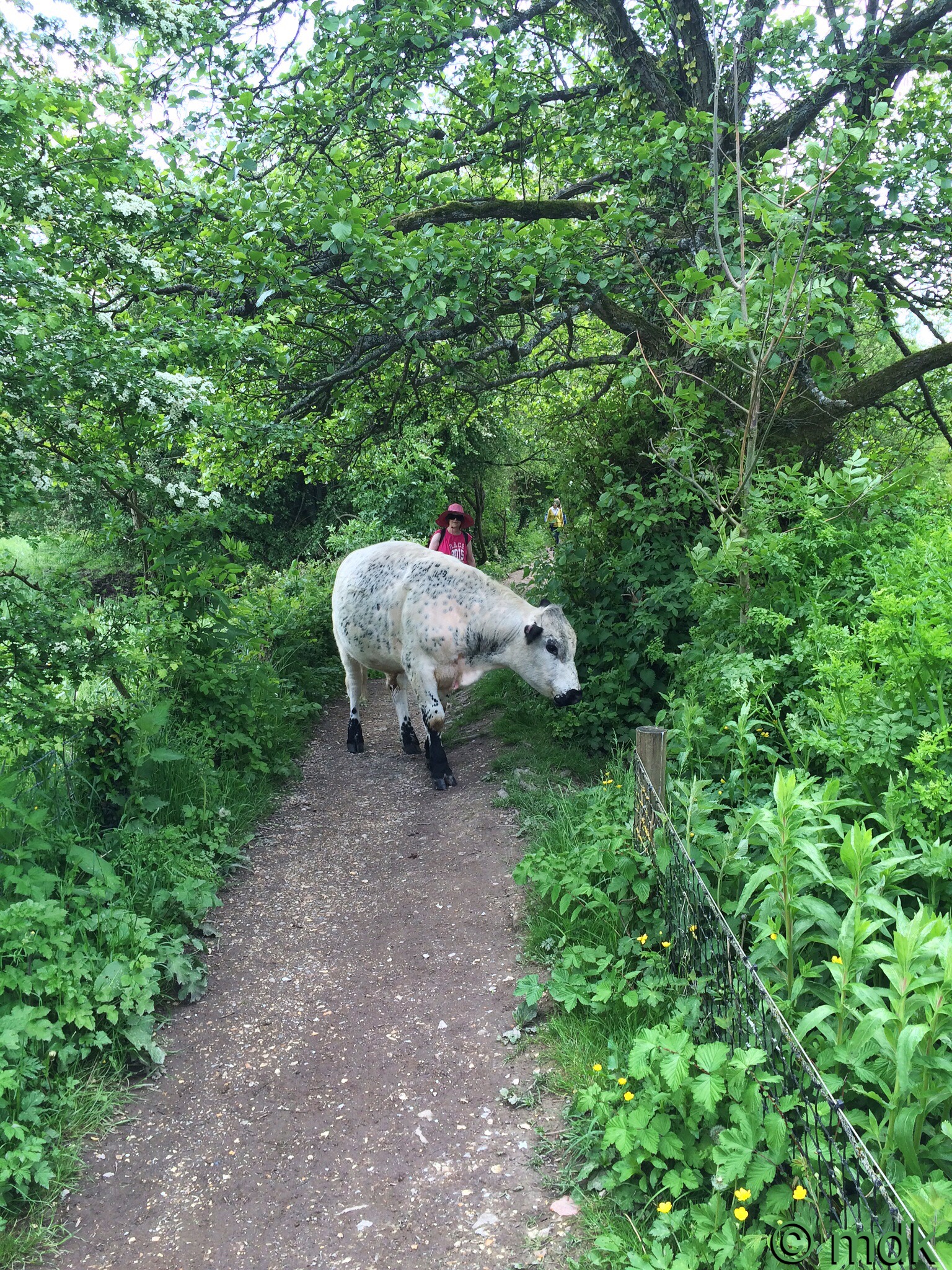 A little way on we could see the field the bull had escaped from, filled with similar looking animals. The grass looked lush and long and it seemed odd that he should have abandoned it for the tow path. More to the point, how had he escaped? There were no gaps in the fence that we could see. Curiosity lead us to the kissing gate but it didn’t look the kind of thing a bull could operate, or fit through for that matter. Perhaps someone had purposely let it out? 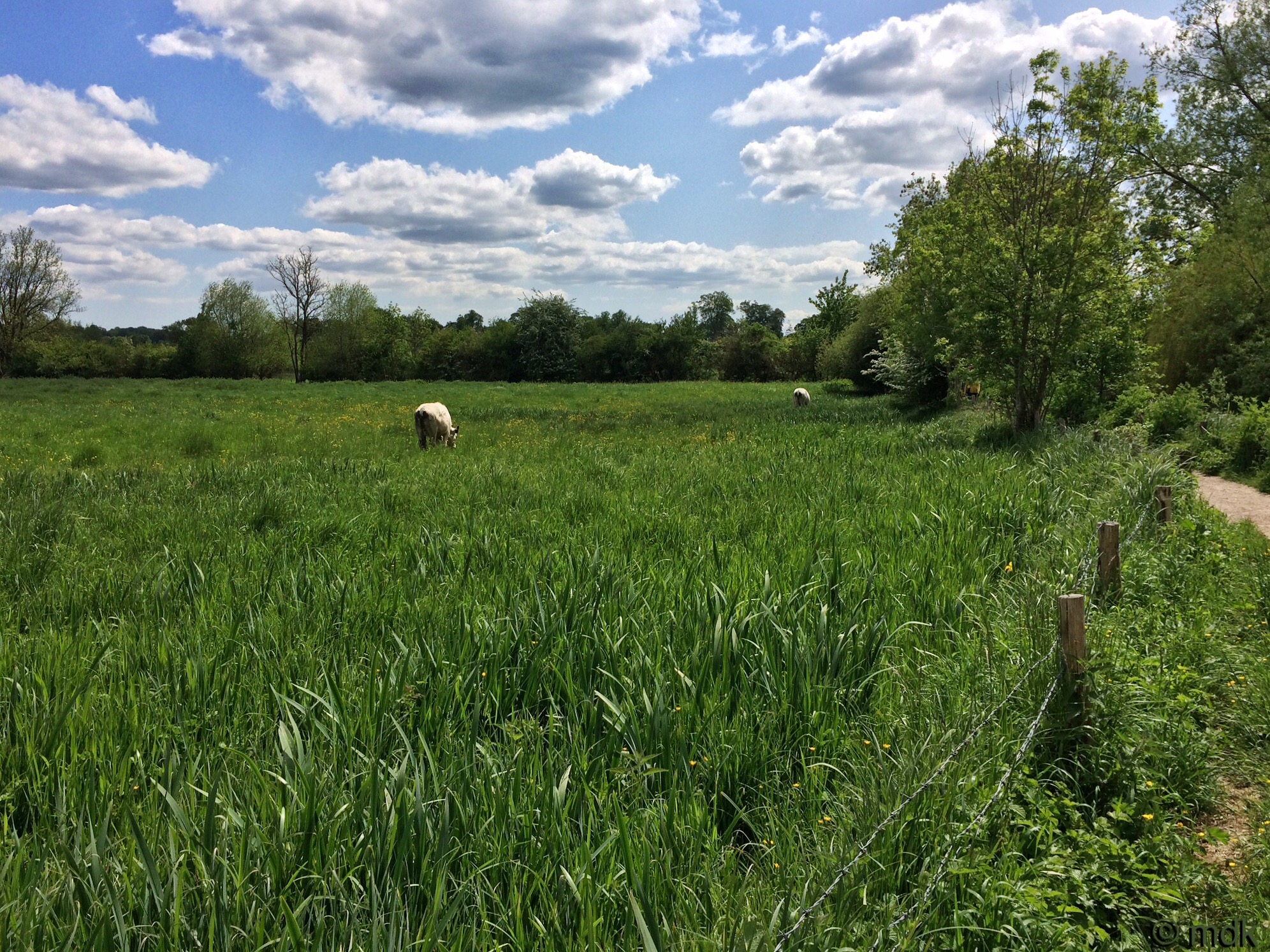 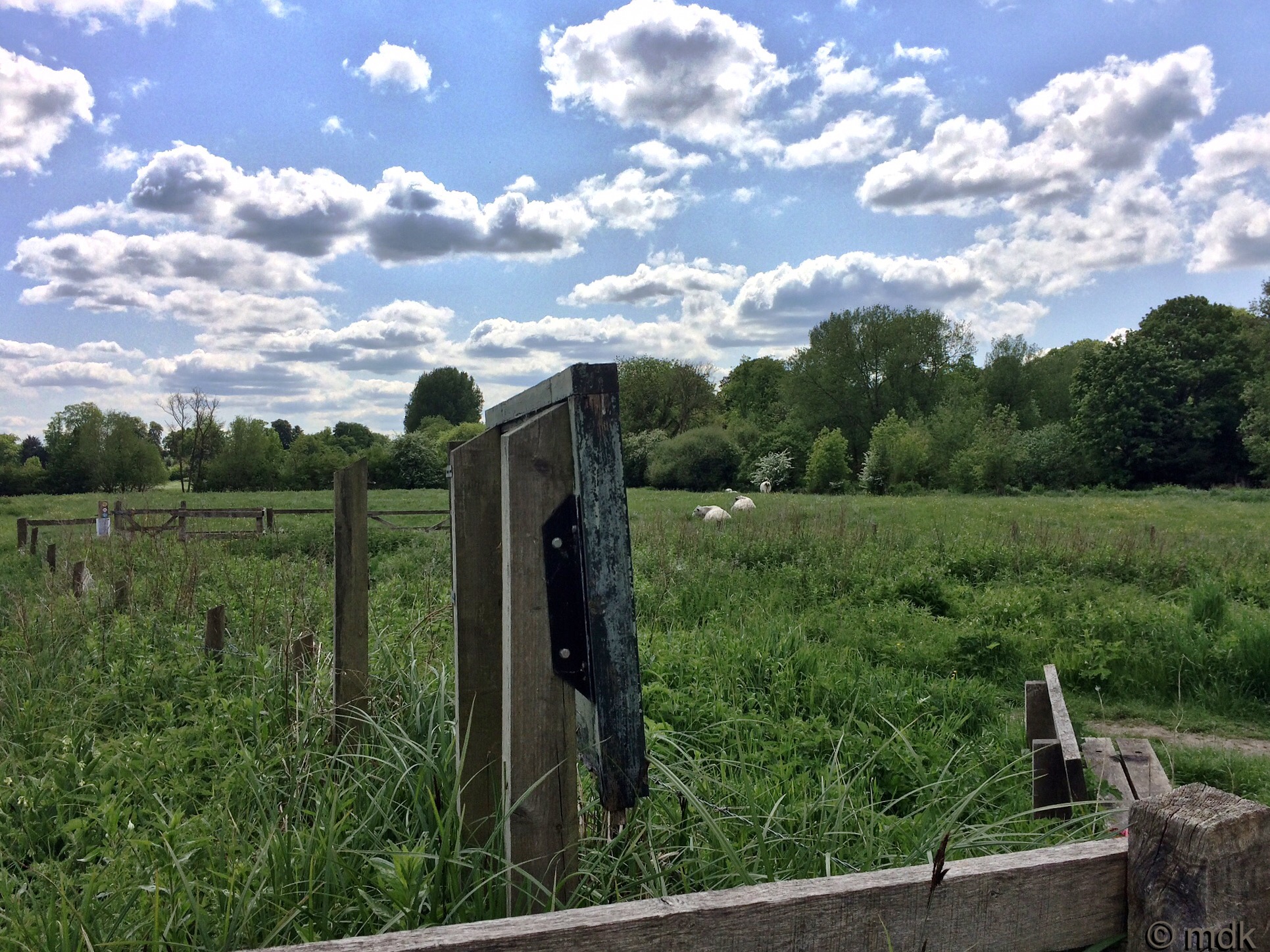 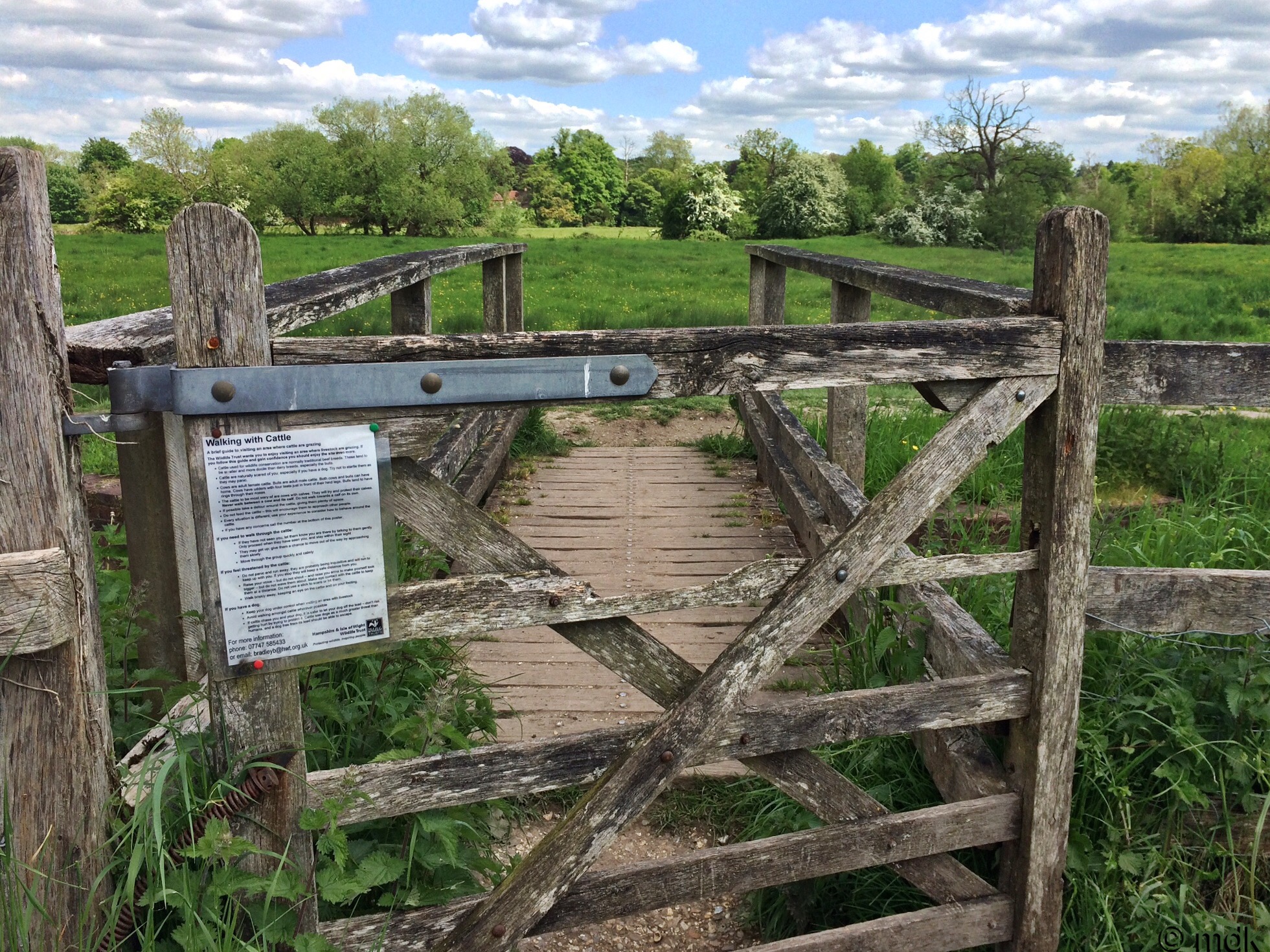 On we went past the bridge over the tail of Compton Lock and the wooden steps where I’d seen young girls swimming on my first ever walk this way. There were men fishing near the head of the lock.
“I saw young lads going over that weir in inner tubes once,” I told CJ.
With a quick look at the old lock mechanism and another look back to make sure we weren’t being followed by the bull, we carried on. 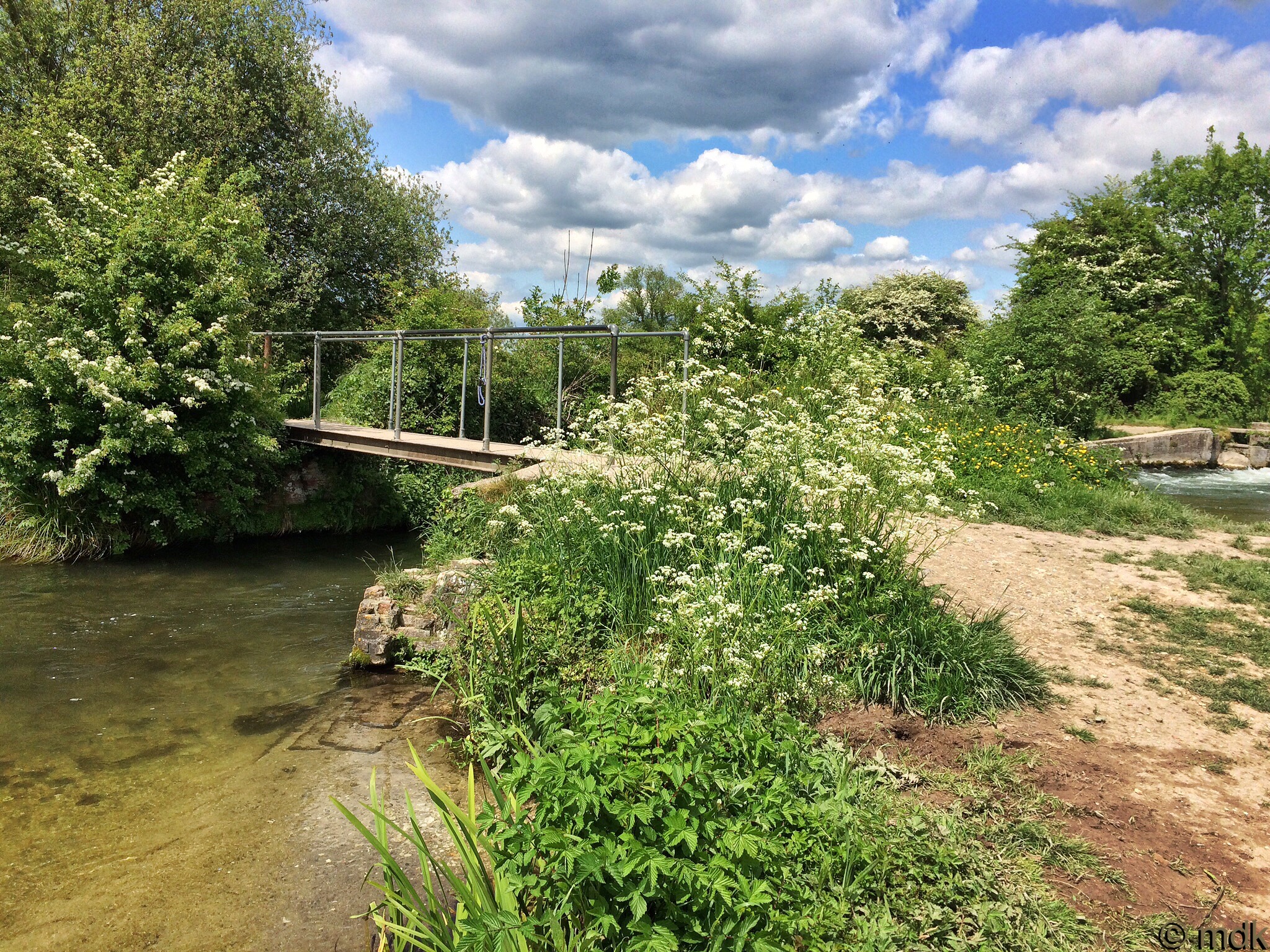 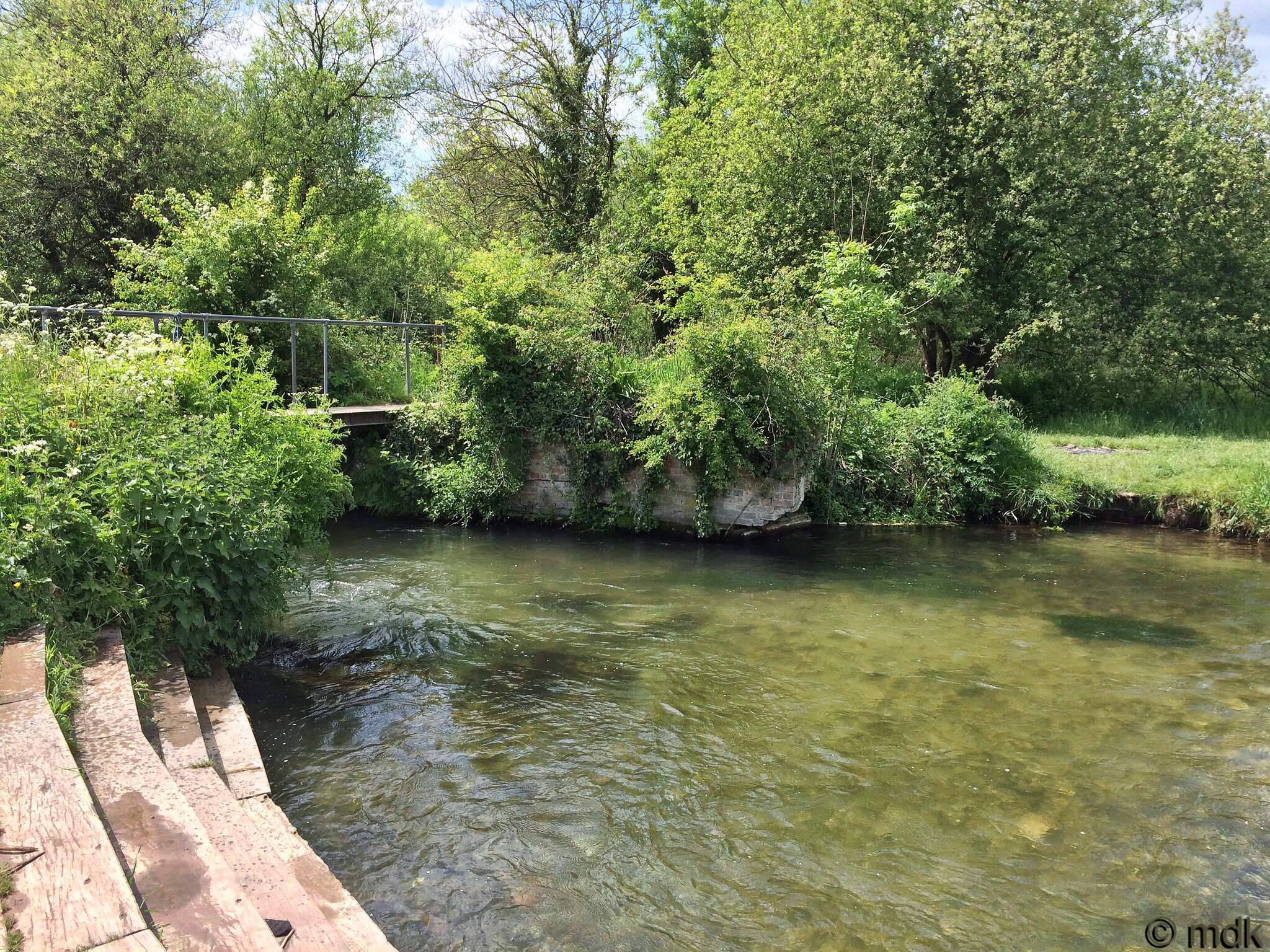 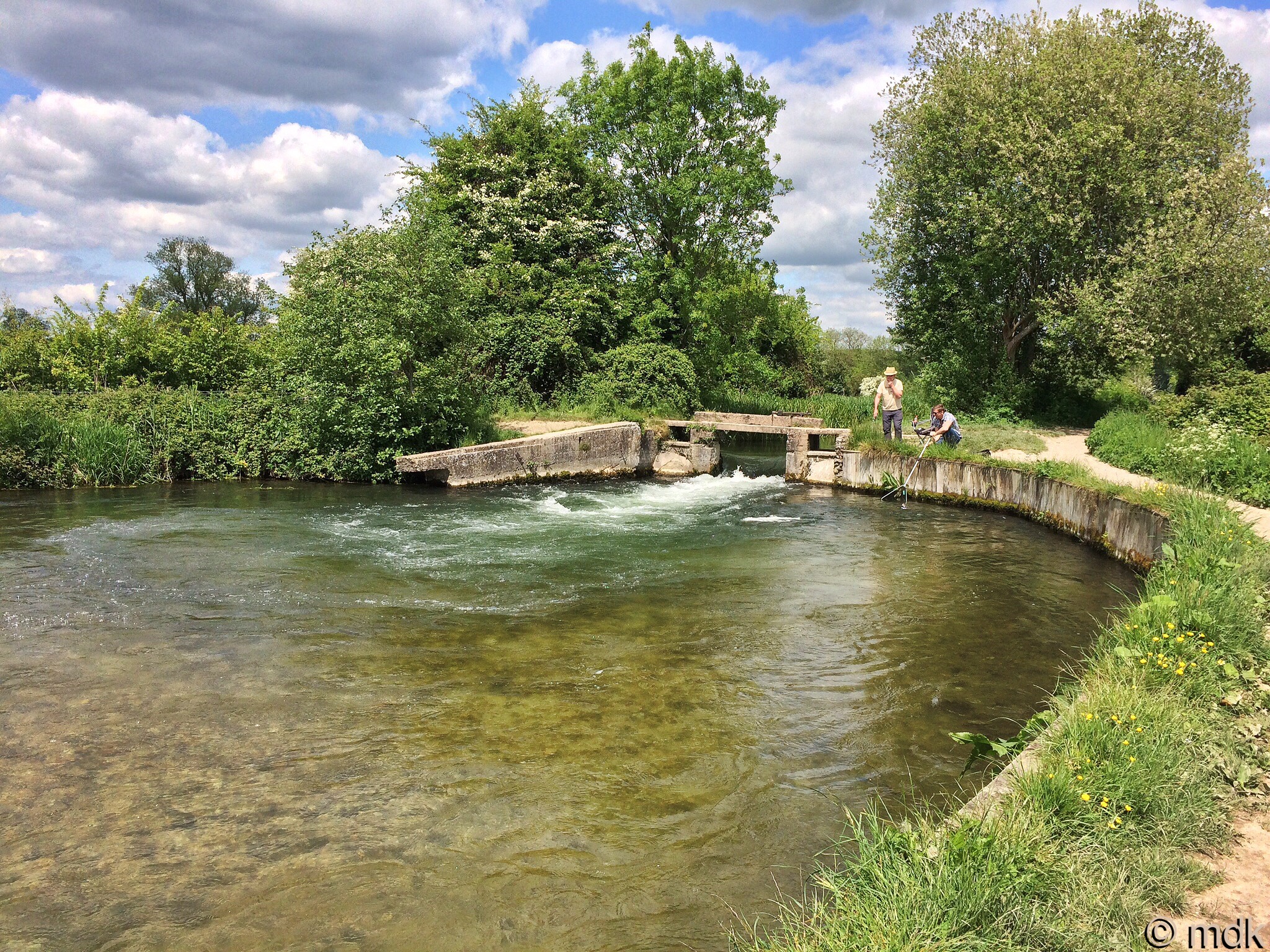 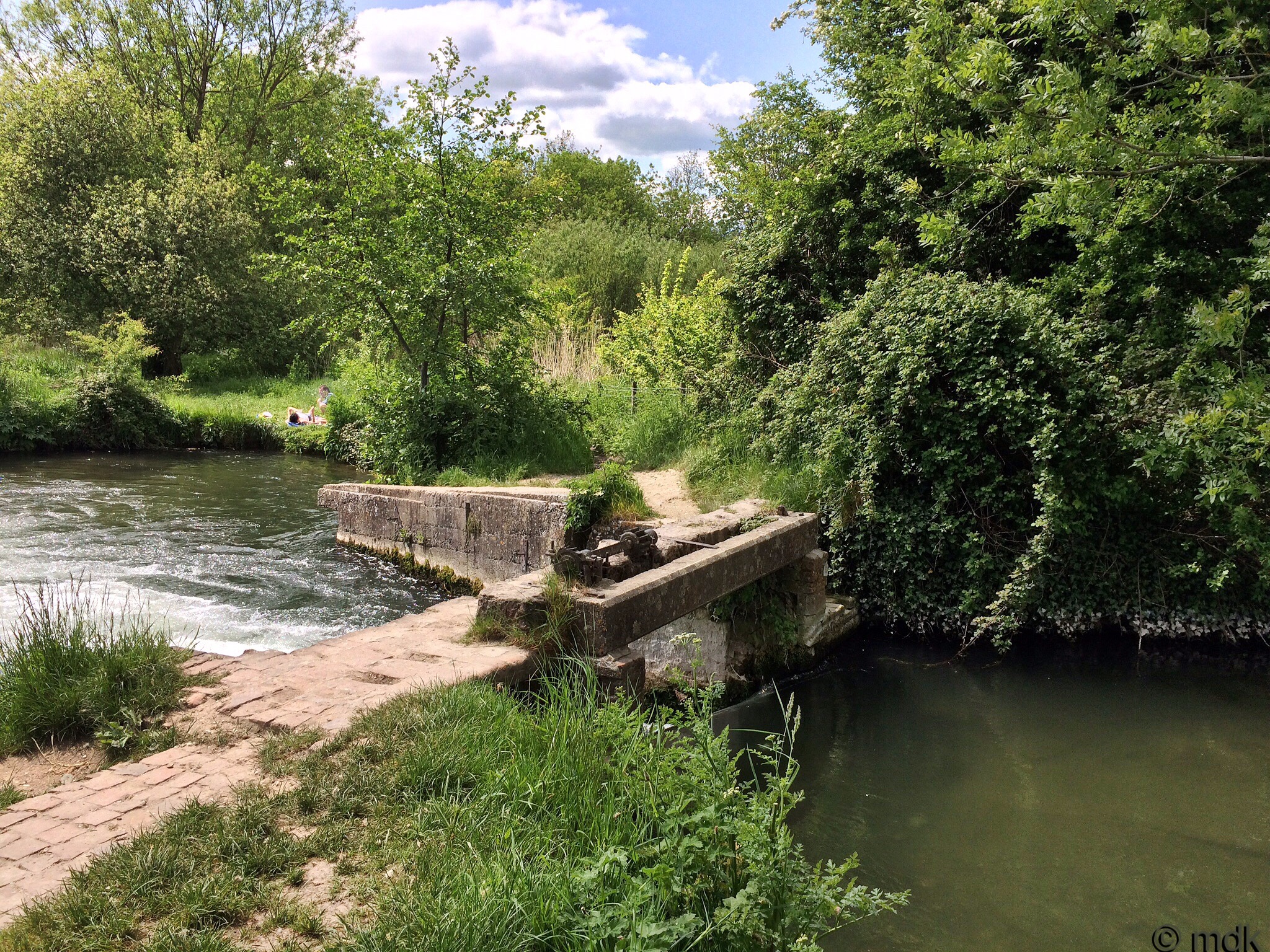 At the next kissing gate we knew we were safe. Well, unless the bull really could get through them. There was a handy sign pinned to the gate explaining how to behave around cattle. We stopped and read it. It felt a little like shutting the stable door after the horse had bolted but still, you never know when you’re going to meet another bull I suppose. Just after this we saw some men fixing a fence.
“Excuse me,” I said to the first one we came to, “there’s an escaped bull on the tow path just before Compton Lock. I wonder if you’d be able to tell someone?”
“Is the fence down?” he asked.
“Not that we could see. I don’t know how he got out but I’m sure the farmer will want him back.”
“I don’t think he’s from this field but I’ll let someone know,” the man said. “Thank you for telling us.”
Further still we met a man with a dog heading towards us.
“There’s a bull on the tow path just below Compton Lock,” I told him. “You might want to watch your dog.”
“Thank you. I will.” He said.
It felt as if we were the official bull warners.

Ten minutes later we were crossing over Twyford Hatches.
“If you take the right hand path here it takes you up to the main Twyford Road, near the Hockley traffic lights,” I told CJ. “At least I think it does. Those sheep in the field are on the farm we passed when we walked to Winchester from Twyford.”
Eleven or twelve miles into a walk is probably not the time to start following untried trails so we carried on towards the road bridge. There was more comfrey beside the path and, amongst it, another mayfly clinging to a leaf. It must be the time of year for them. 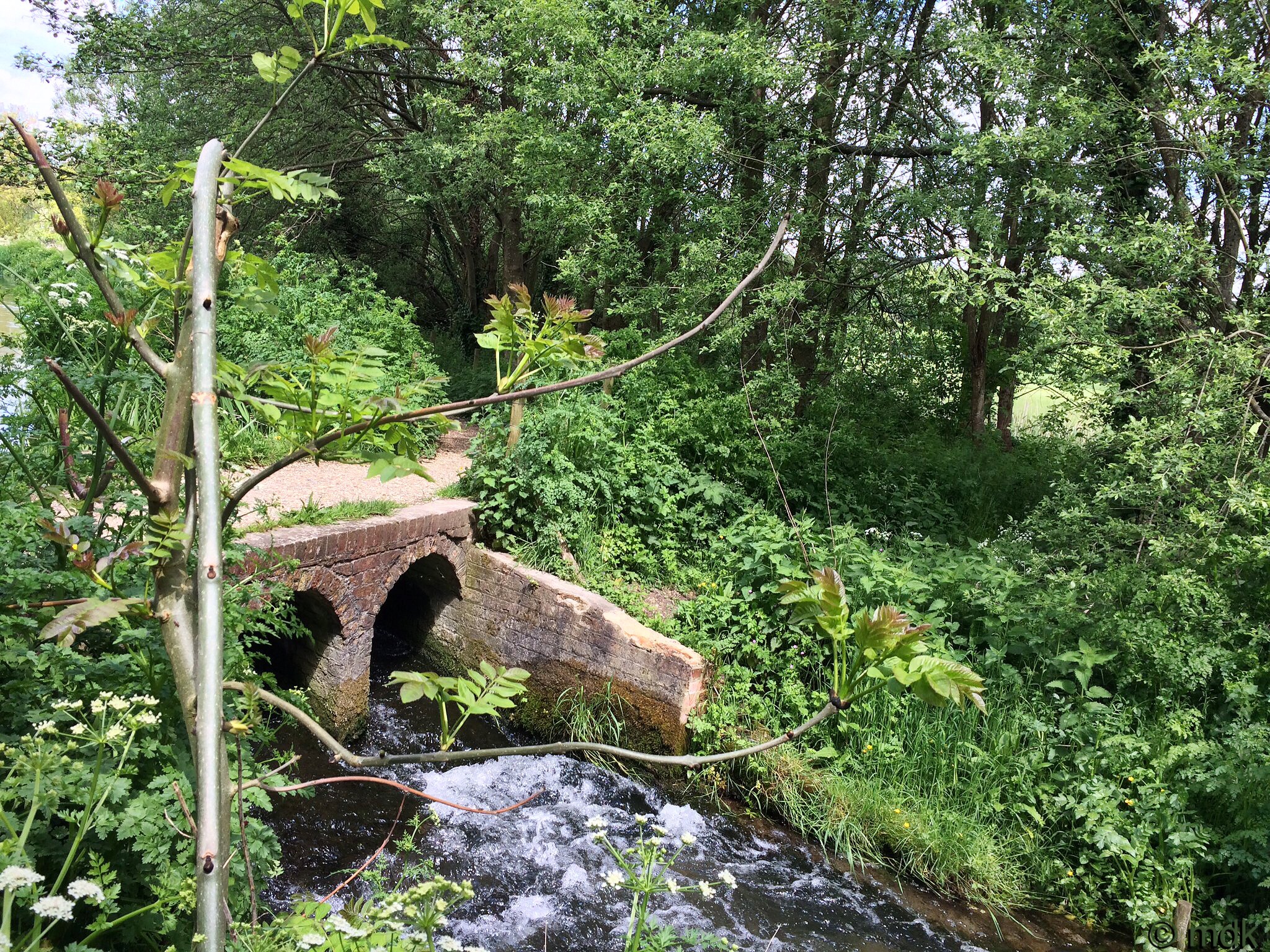 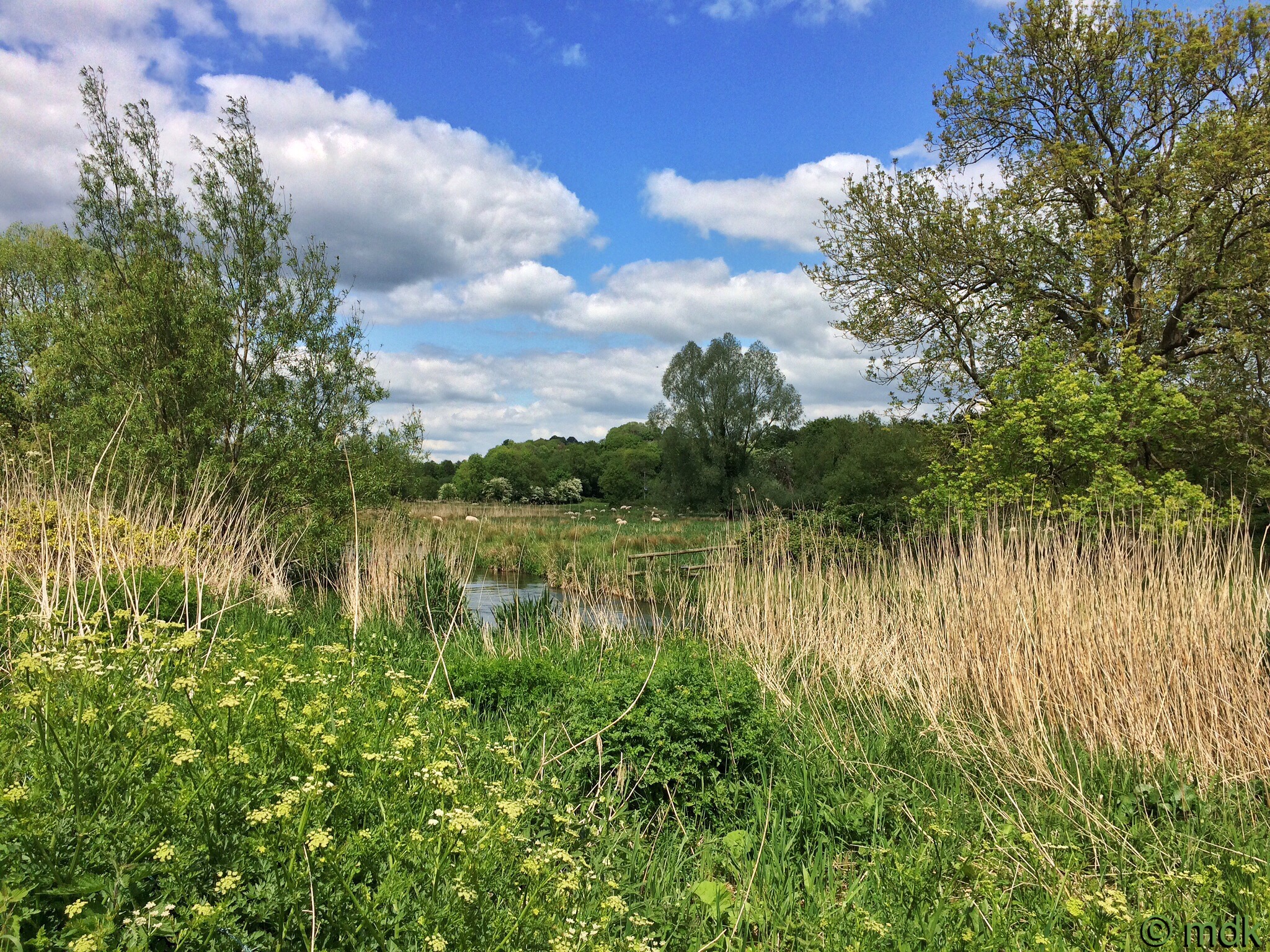 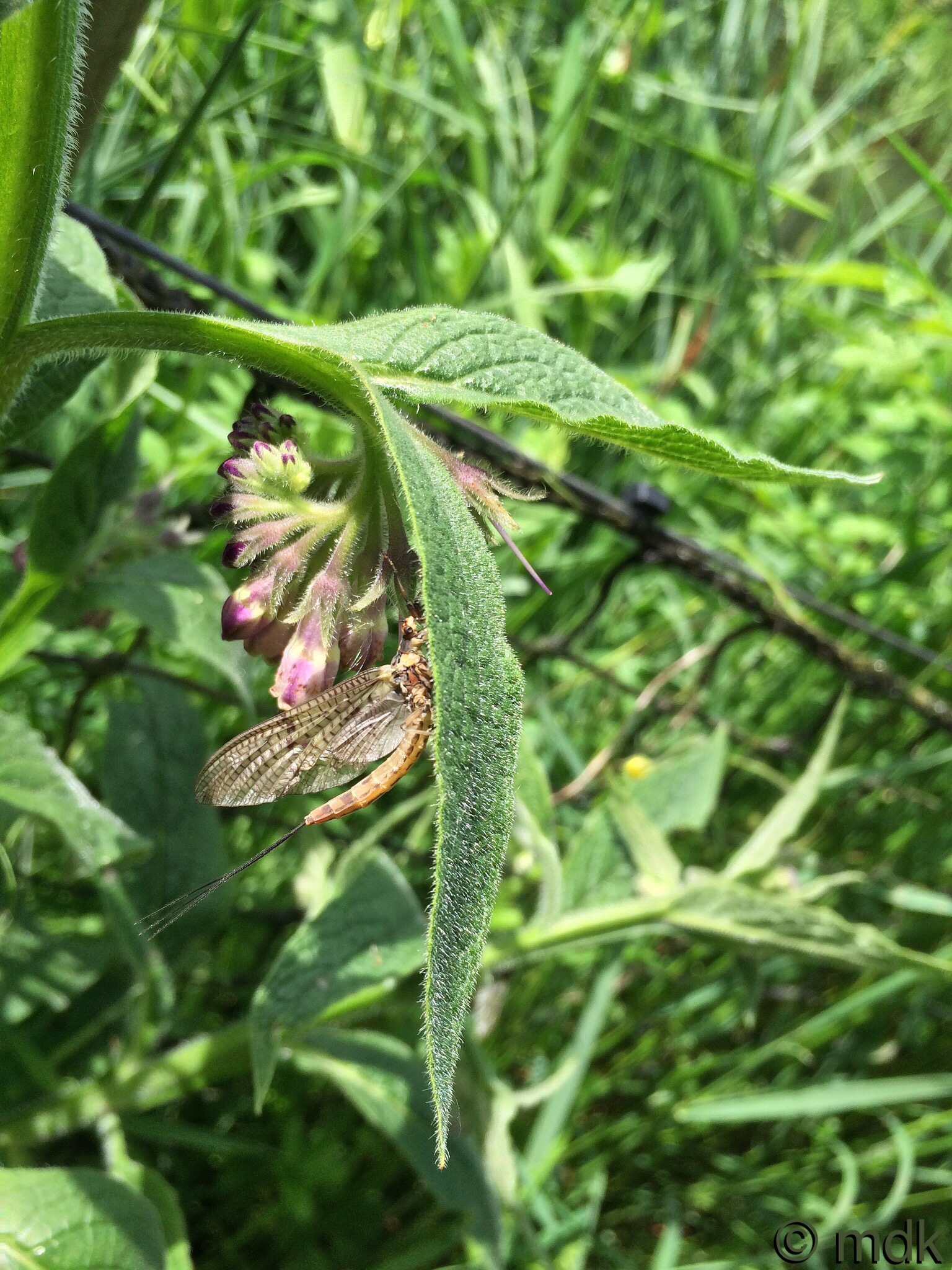 Beyond the bridge we could see the brick arches of the Hockley Viaduct.
“Maybe we’ll be able to see the viaduct properly when we got up on the road,” CJ said.
“I don’t think so,” I said. “At least, not as far as I remember.”
When we reached the top of the slope onto the road the view of the viaduct was blocked by trees, just as I suspected. There were tiny glimpses of the red brick between them in places but nothing you could really call a view. 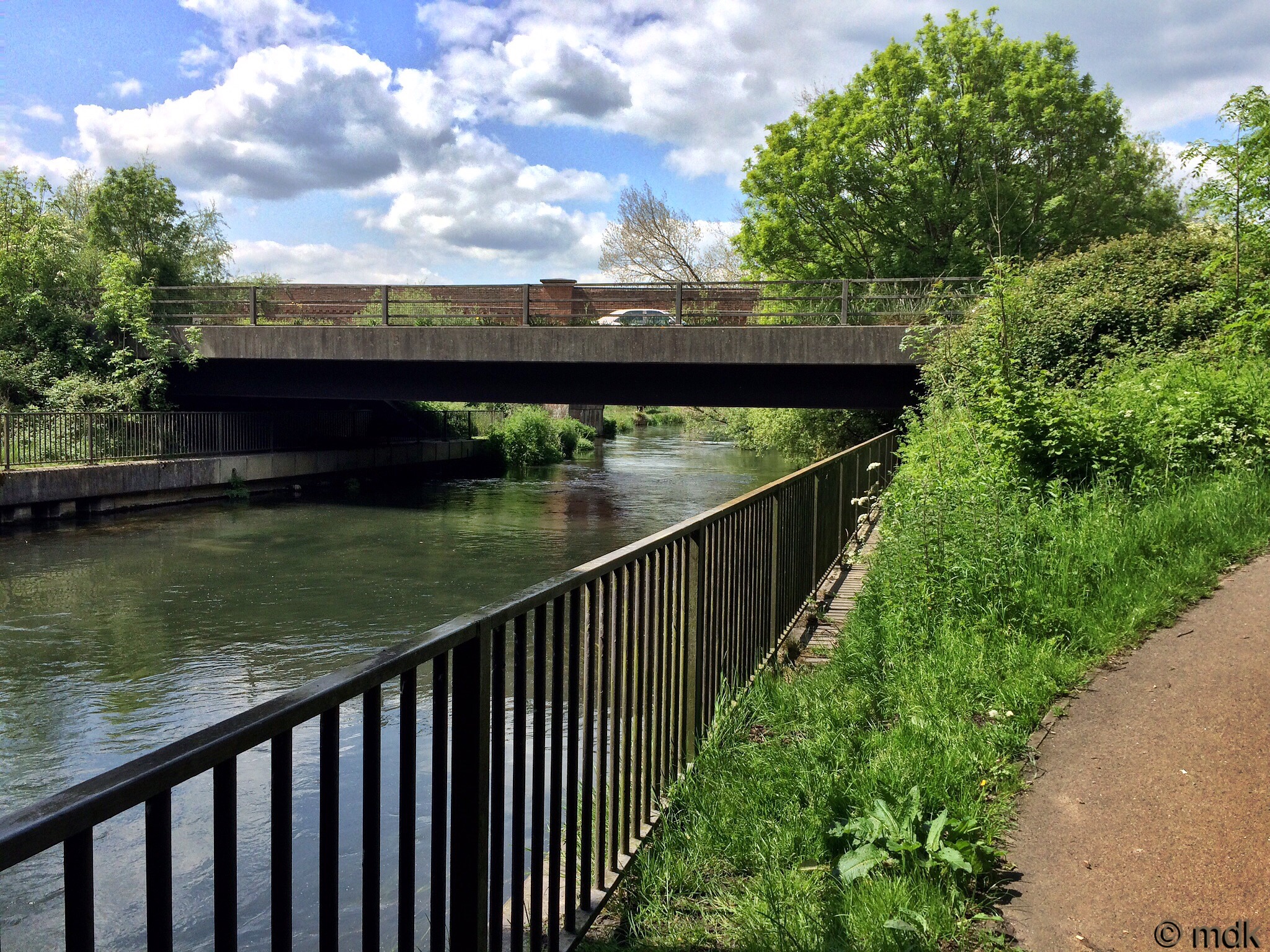 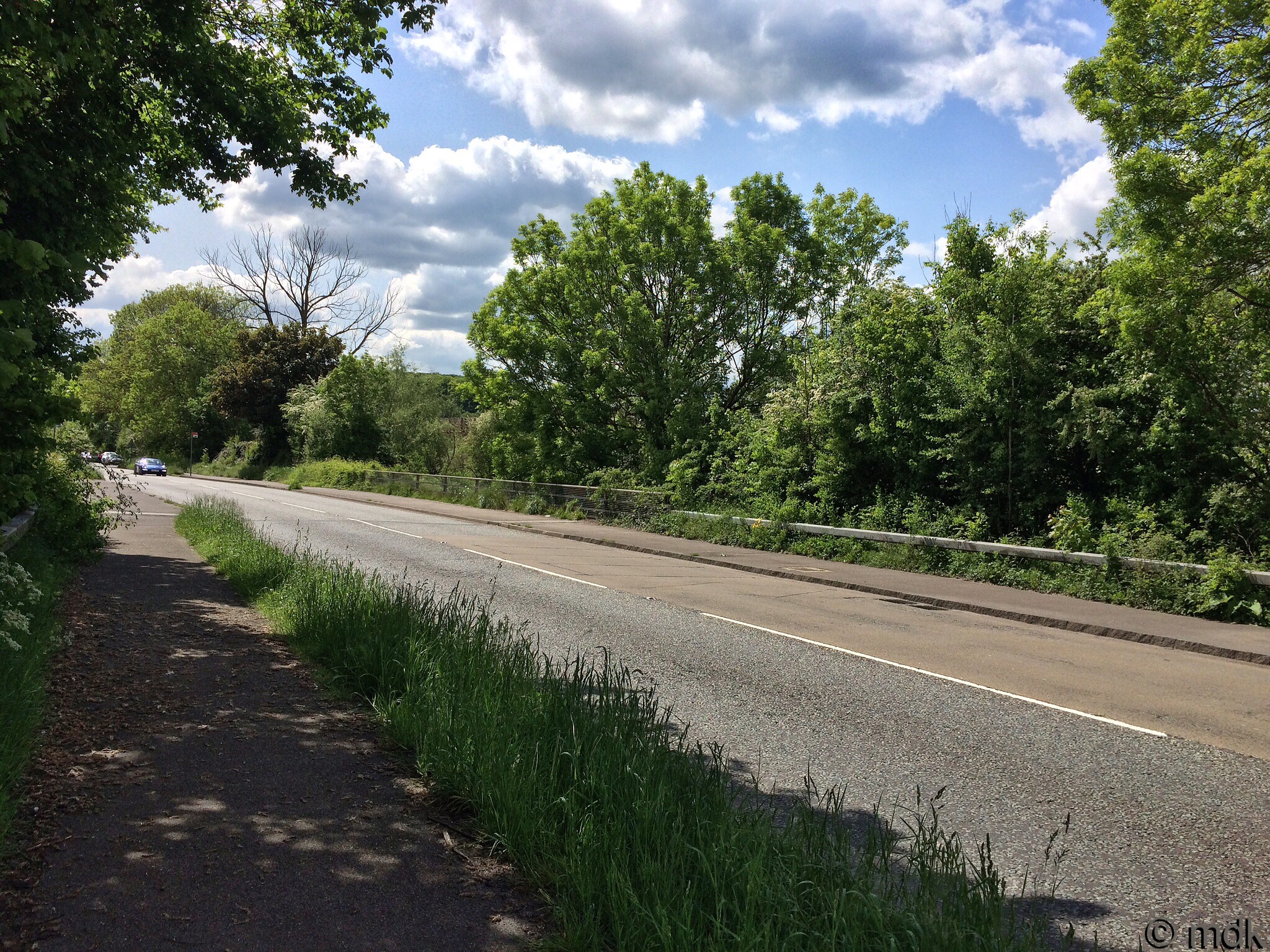 It took a while to cross the road, even with the traffic lights at Hockley, but soon we were back on the Navigation trail passing the slope up to the viaduct walk. There were little dots of people climbing the zig zag steps up St Catherine’s Hill.
“Maybe another time we can drive out here and climb it,” I said. “There are amazing views from the top. When I climbed it with Dad the water meadows were flooded and the sun was setting. All we could see was water glowing the the evening light.” 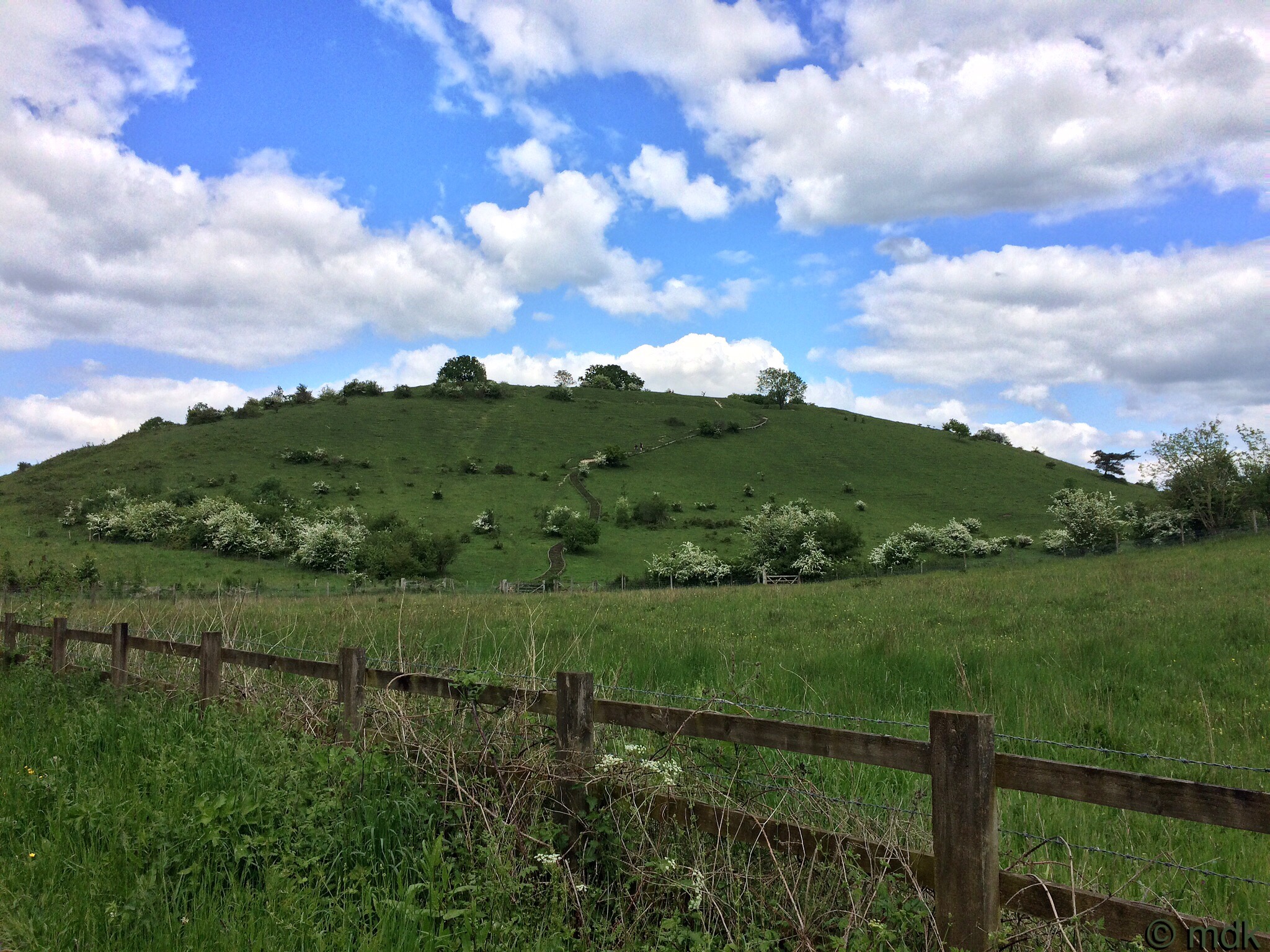 There were more white cows in the field beside Plague Pits Valley. Thankfully they were safely behind the fence. The farmers bring them here to graze. I saw them once turfing them all out of a big lorry. We carried on, past St Catherine’s Lock and the barge bench, half expecting to come face to face with another bovine escapee. In the end this part of the journey was uneventful and we were soon crossing the Winchester College playing fields.

The river here was busy. A young lad was rowing an inflatable opposite the final Navigation marker. His parents were watching from the bank. Further along some college students were practicing their rowing along with a lot of shouting. To add to the noise a large mower was going up and down the field. Beautiful the fields may be but quiet they most certainly are not. 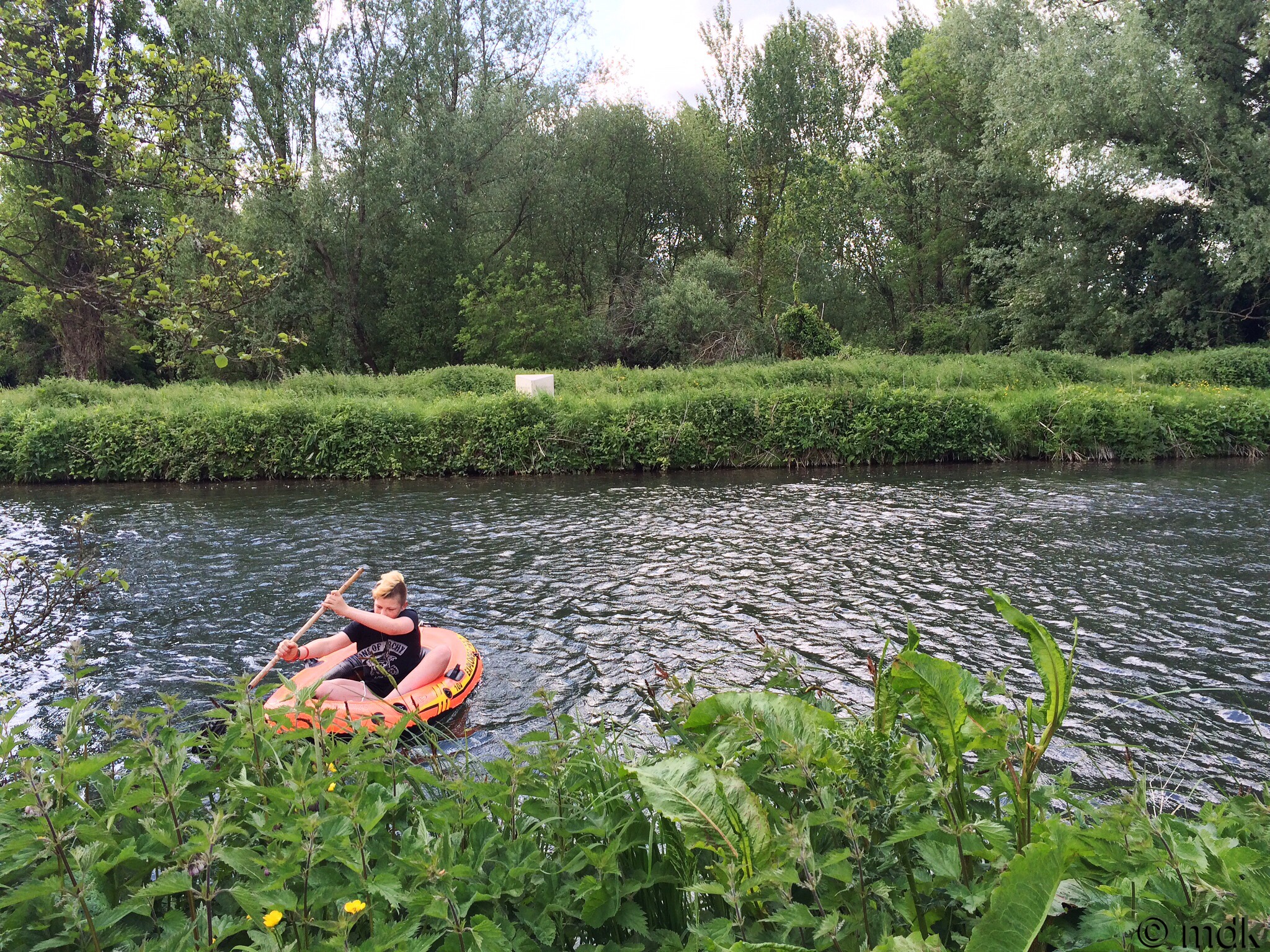 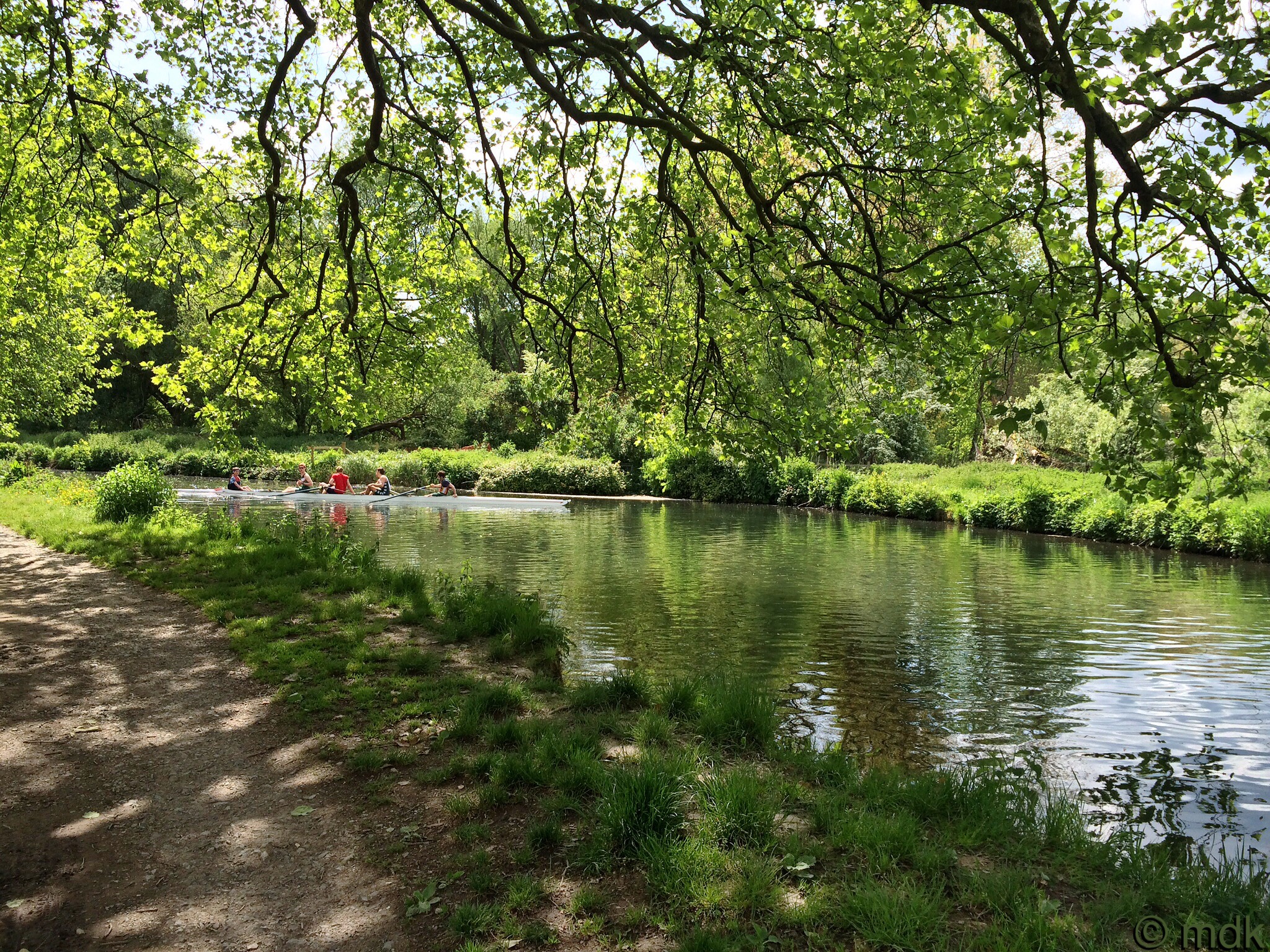 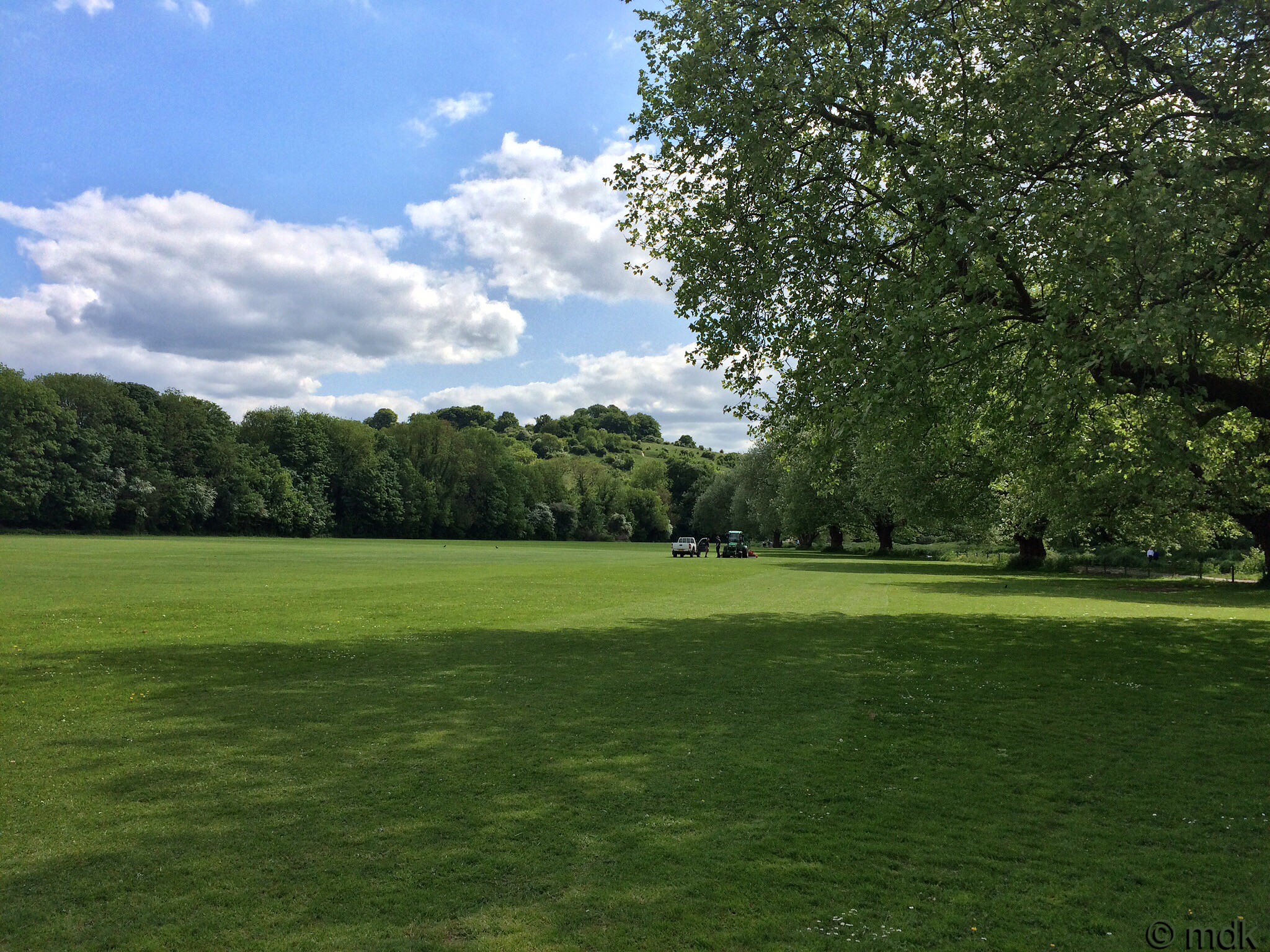 Instead of turning off when we came to the end of the field we carried on past the enviable houses on the river bank near Domum wharf. These are properties I’ve often envied from the other side of the river and, although I wasn’t entirely sure where the narrow gravel path came out, I was interested to find out. CJ spotted a lovely old tree house in one of the willows lining the path. It looked like it had been there for some time but I suppose, from the opposite bank, it’s hidden by the foliage. 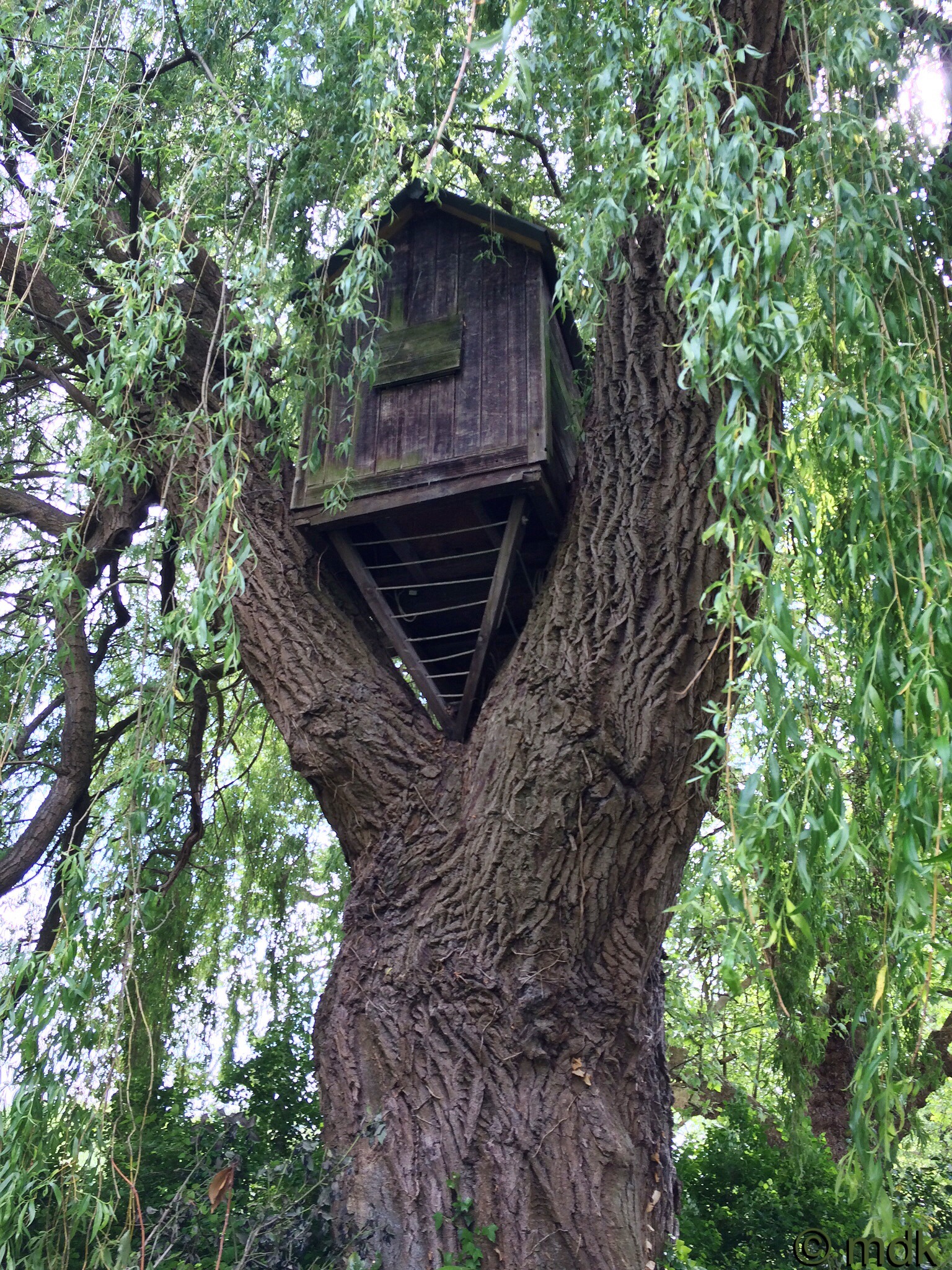 When the path came to a dead end ahead I thought we’d have to turn back but we found a handy cutway between the houses. It led us out onto Domum Road close to the old wharf. We’d reached the end of the Itchen Navigation and, finally,  CJ could say he’d walked it all. We took a quick detour to Wharf Bridge so CJ could have his photo taken as proof he’d really done it. 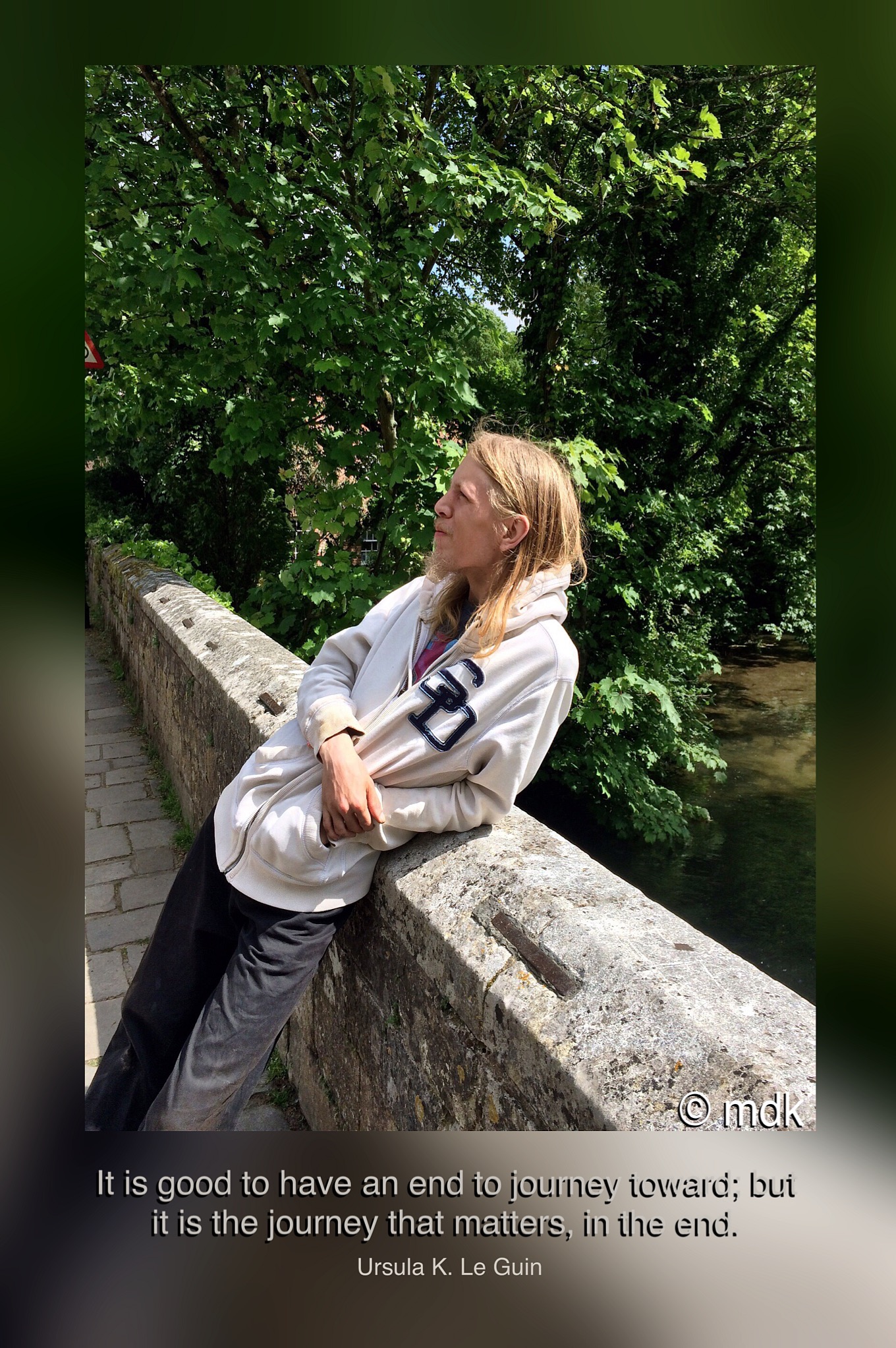 Of course, our Navigation adventure may have been over but the walk wasn’t. We followed the tinkling river up to City Bridge, our steps considerably slower than they had been when we seat out this morning. We stopped for a moment to admire King Alfred’s statue and looked longingly at Abbey Gardens.
“I wish we had time for a walk round them,” CJ said.
“They’ll have to wait for another visit,” I told him. “Unless you want to miss your Costa Coffee stop?” 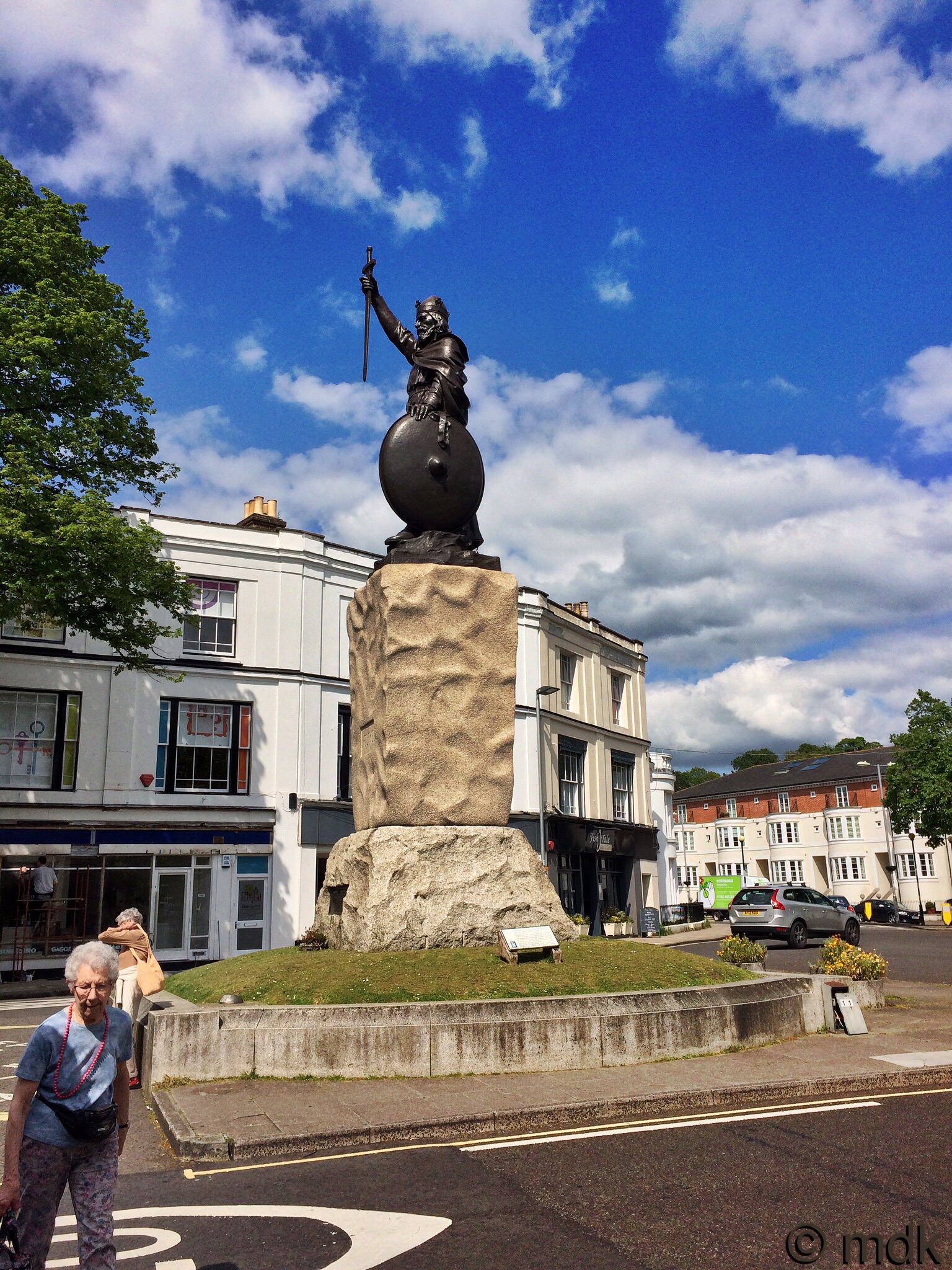 CJ told me he’d been looking forward to a coffee since we met the cow on the tow path so we left the gardens behind and walked up the High Street for our caffeine fix. Then it was on, past the Buttercross, to the train station. Now our long adventure really was over. Who said CJ would od never walk fifteen miles? 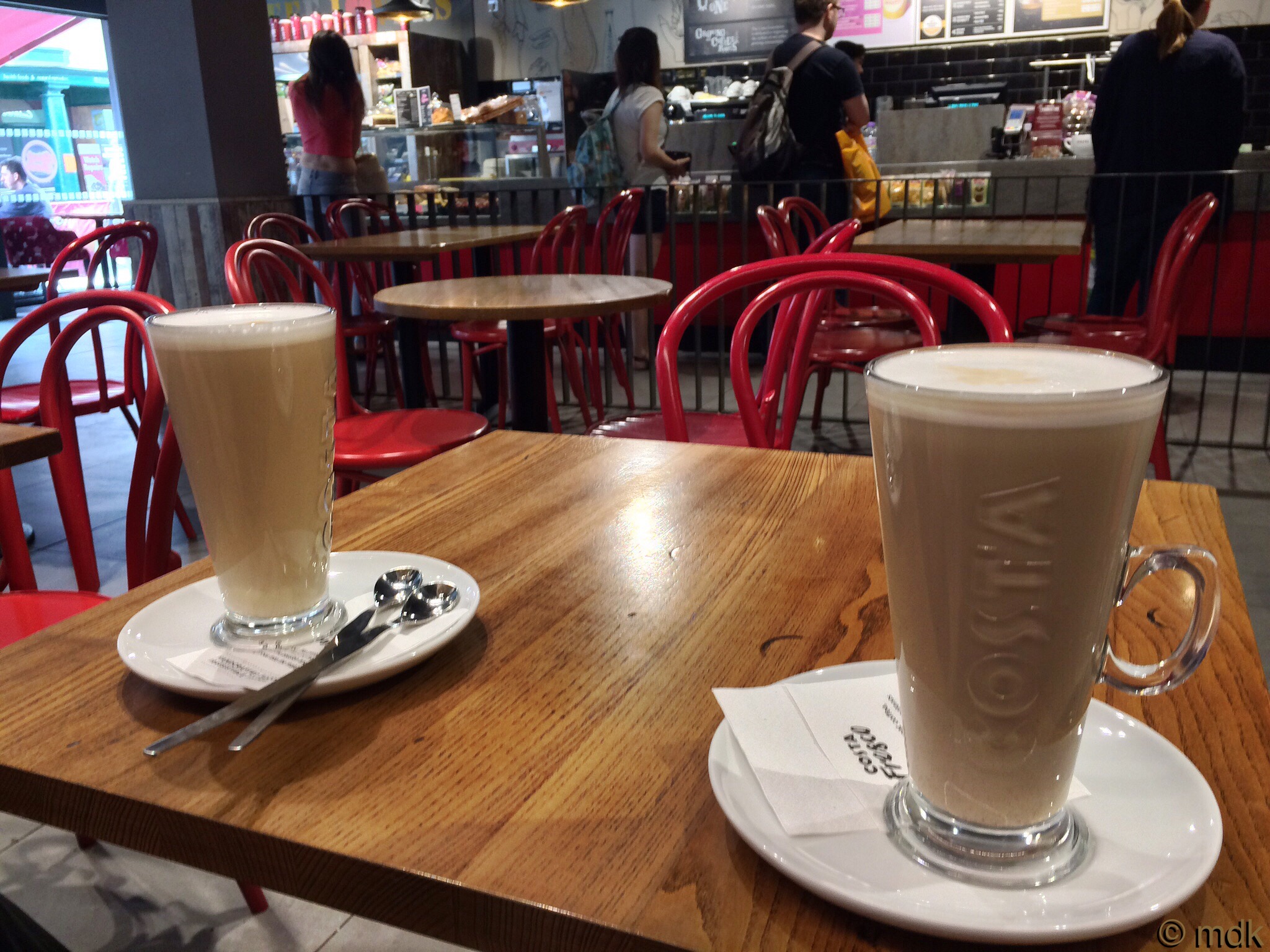 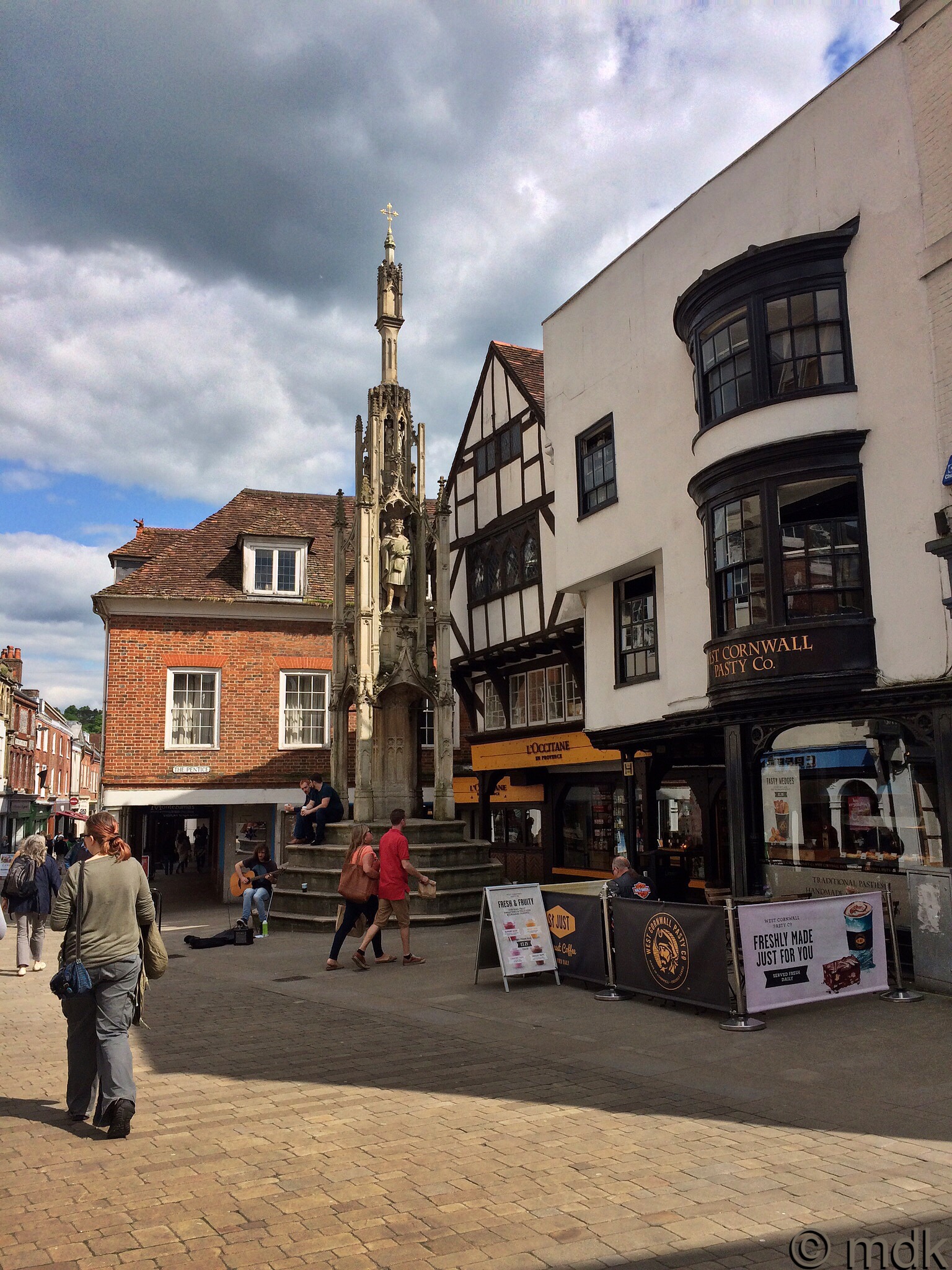 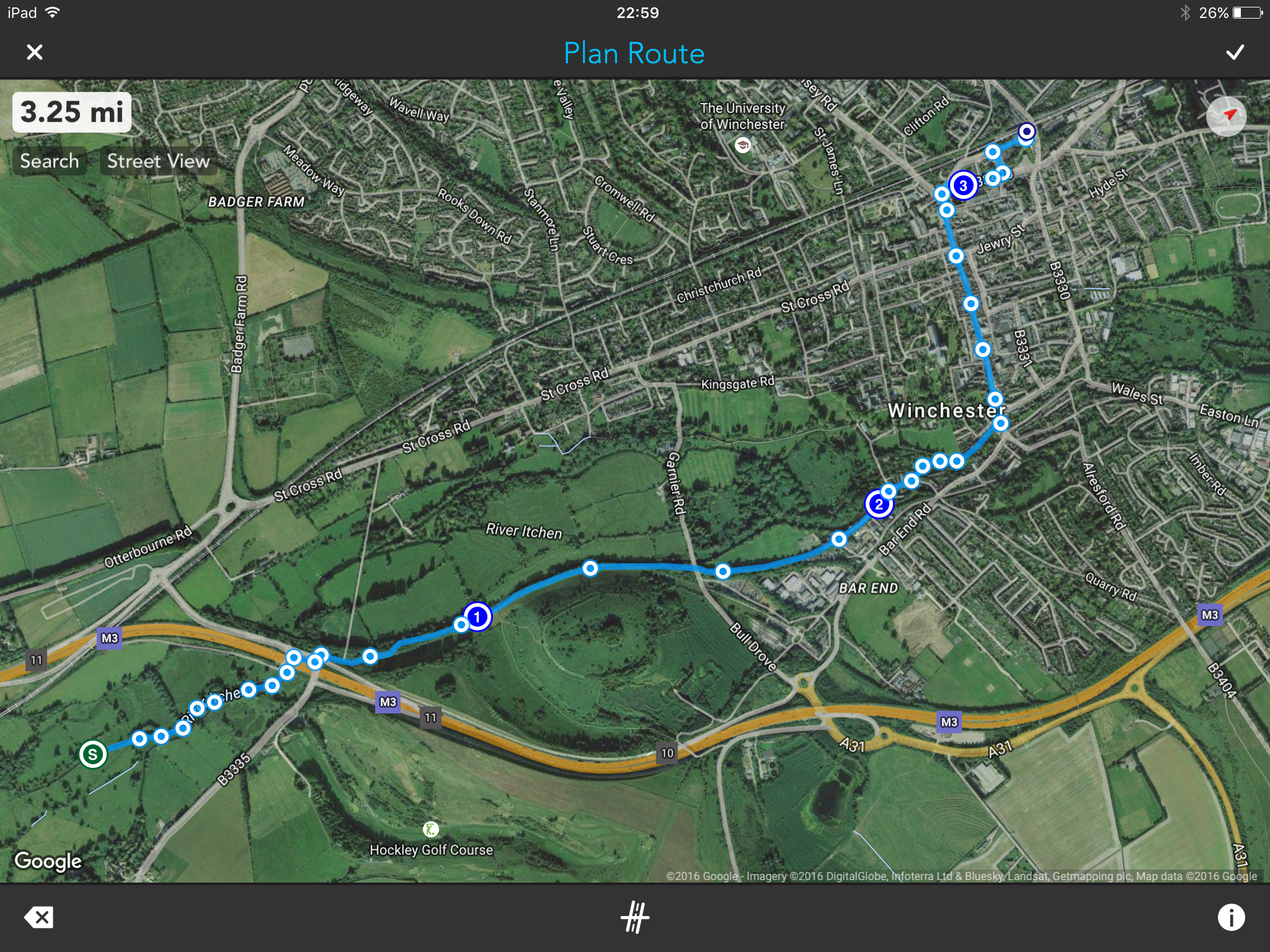 12 thoughts on “The final miles”