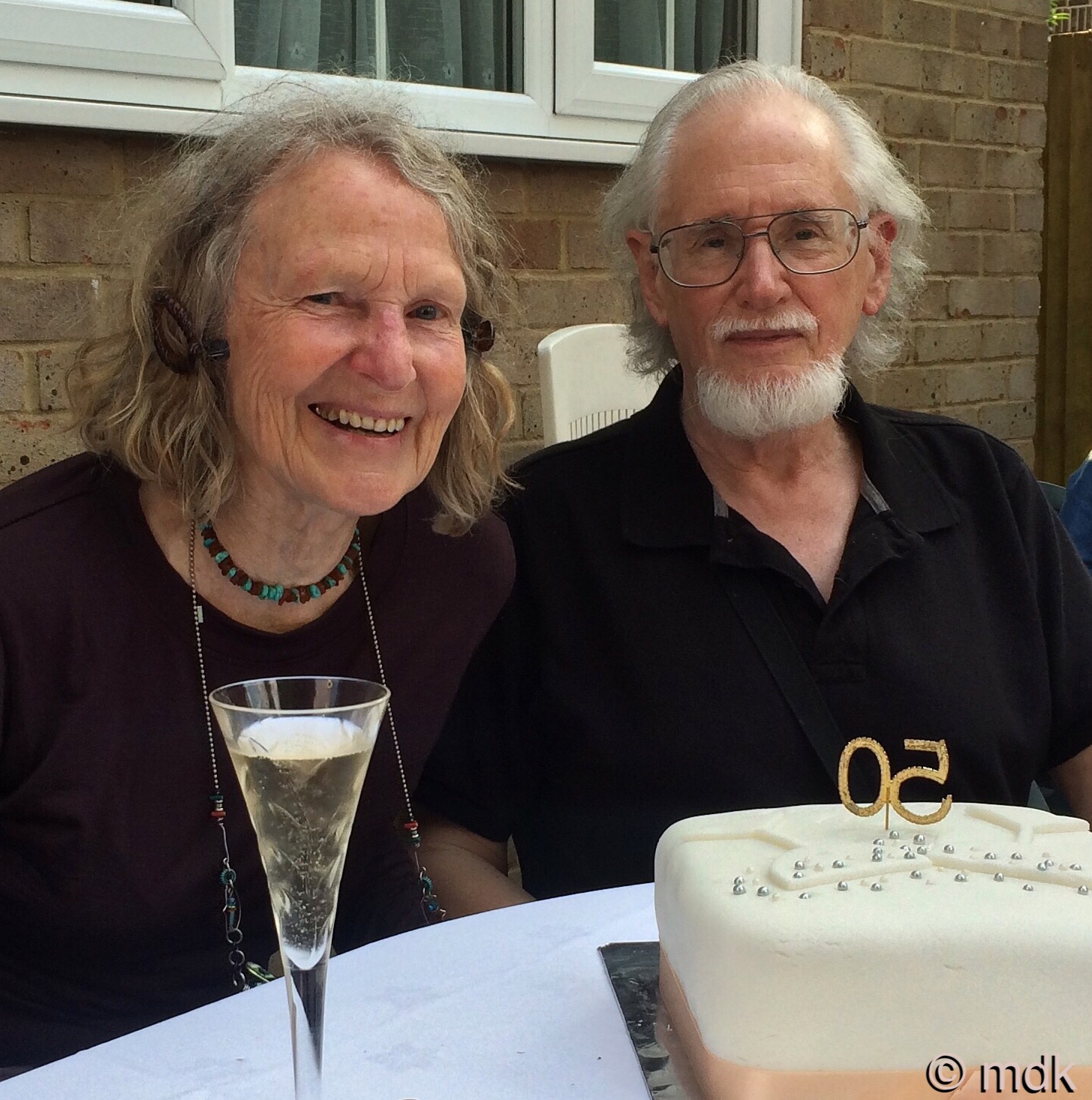 This week seems to have been mostly about family. It began on Sunday with a gathering of the clan to celebrate an anniversary. Maggie and Alan, who showed us such hospitality when we were in Toronto last year, had come to England to celebrate their fiftieth wedding anniversary. As I was driving, I couldn’t have any of the champagne but I did have a slice of the wonderful cake made by Shirley, whose Sunday lunches are legendary.

As the champagne flowed and toasts were made I looked at Commando and wonder if, in twenty five years time, we will have a gathering like this? If we do, I’m pretty sure we won’t look as good as this wonderful couple. Maybe we need to move to Canada. There must be something in the clean fresh air there. 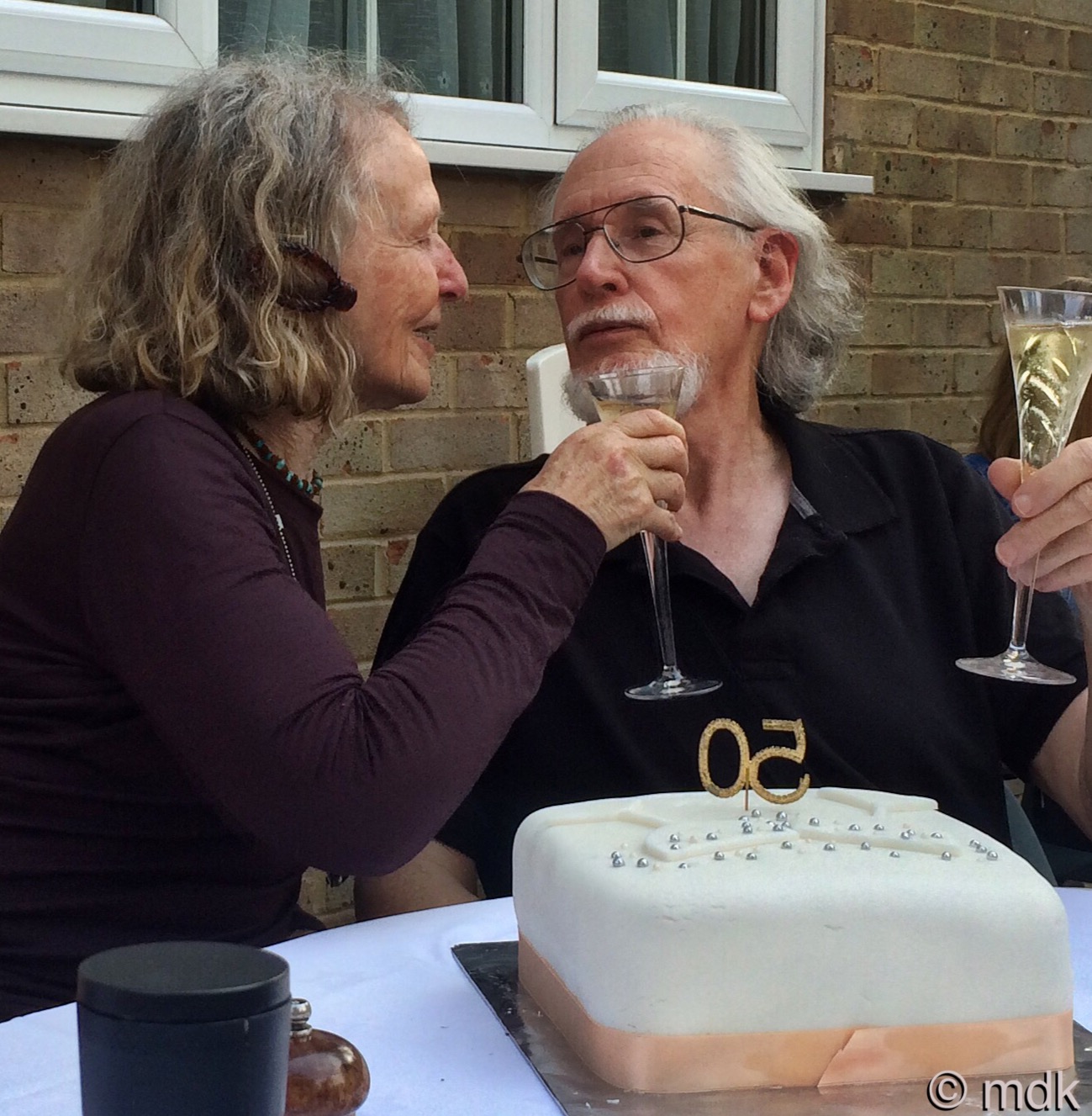 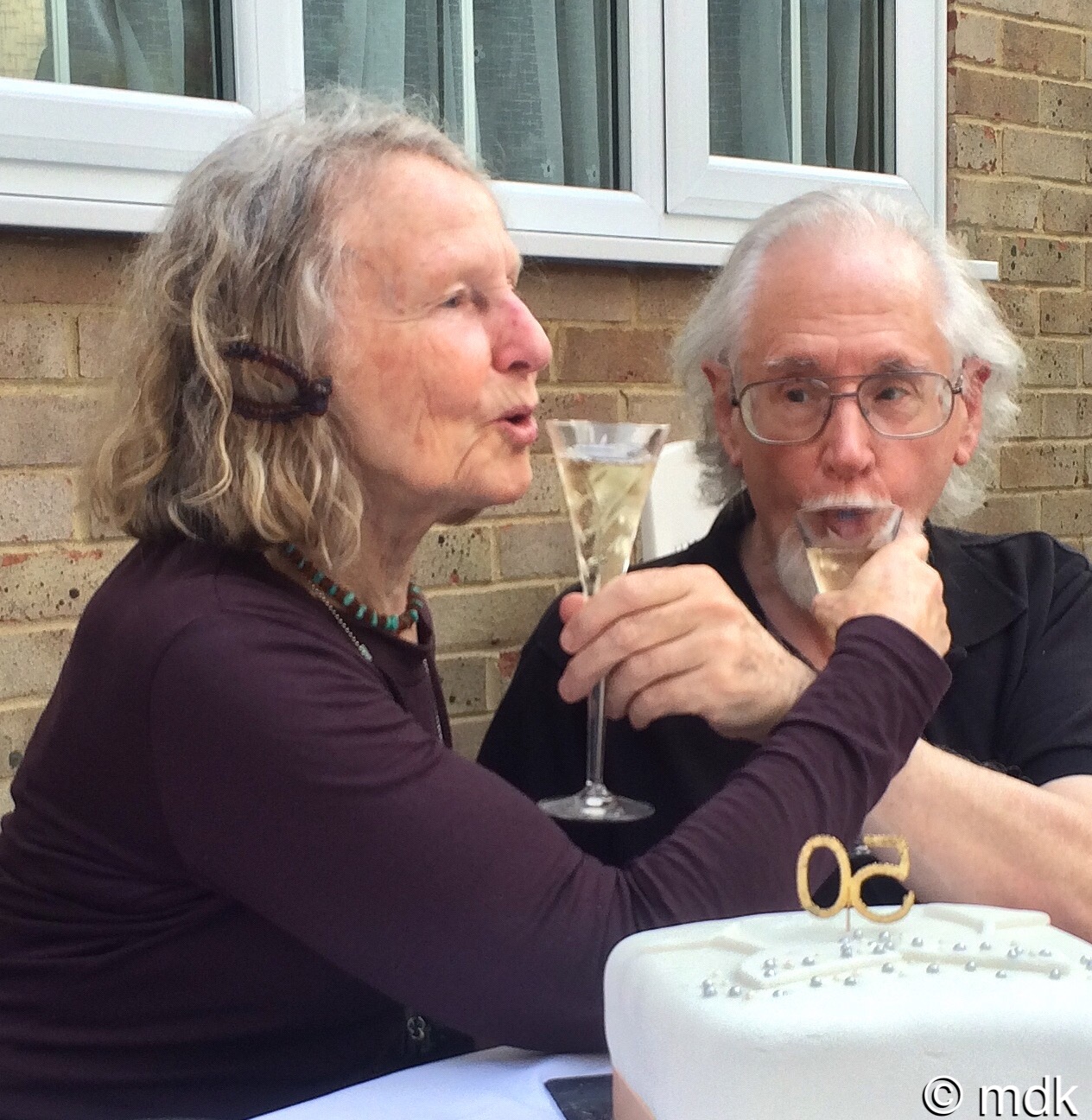 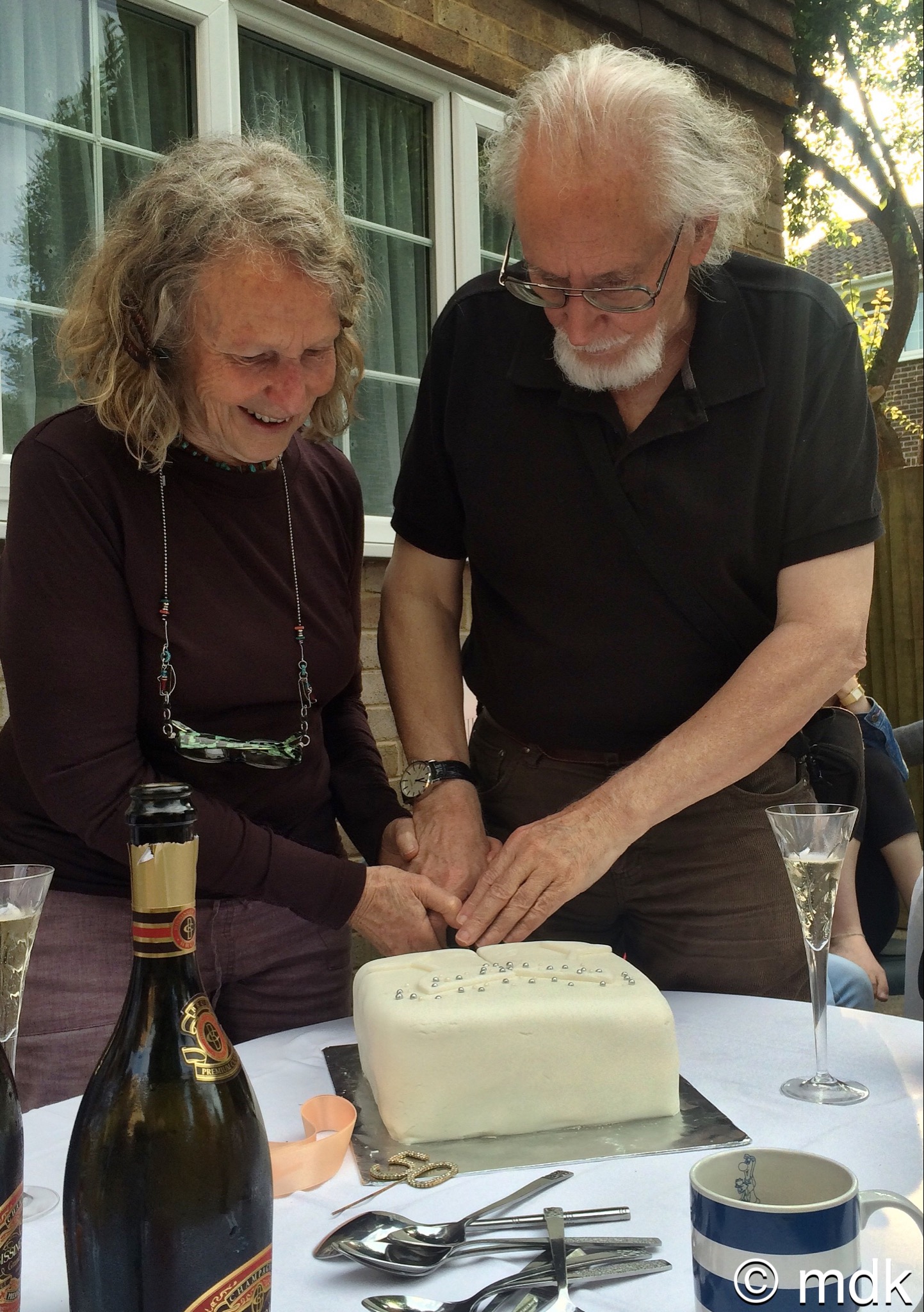 Today the family theme continued with a visit to my nephew, Matt. He runs a business, The Gerbera Van,  selling accessories for VW’s and, as usual, the house was filled with gerberas, leis and all sorts of interesting things still in development. Mostly this involves the wonderful Jean coming up with clever ideas and making things. Today she was threading coloured fabric flowers to produce custom coloured leis. I felt as if I should be joining in and helping but anything I made would probably never be as good as hers so I kept my hands in my lap. 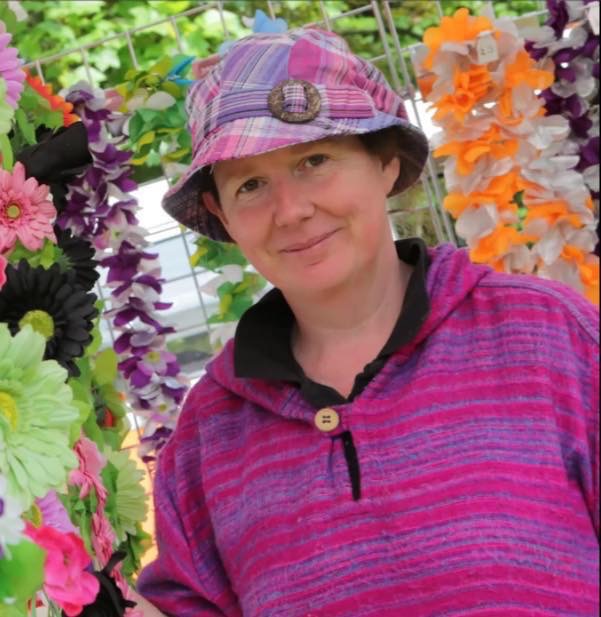 Over coffee we chatted about this and that and we somehow got to talking about the boundary stones. Matt liked the idea of searching them all out but, even though Weston Shore was his playground as a boy, he’d never seen the one there.  Matt and Jean live on the west side of the city, near the river Test, an area I don’t venture into that often, but I knew there was a boundary stone fairly nearby, on the old bridge at Redbridge.
“We could go and have a look at it if you like,” I said. “It’s one I’ve not ticked off my list yet so CJ will be cross but we don’t have to tell him, right?”
“It’ll be our secret,” Matt said.

So we set off for the old bridge. We’d both driven over the Redbridge Causeway countless times but neither of us had walked over, at least not on this side, so we weren’t entirely sure how to get onto the old bridge. From looking at the map I thought we’d probably have to go right across and then double back on ourselves. As it happened, I was wrong. About a third of the way across there was a gap in the shrubbery and a foot worn trail through the long grass down a steep slope onto the bridge. Railings blocked the way but they were easy enough to get over.
“Shall we?” I asked.
“Why not?” Matt replied. 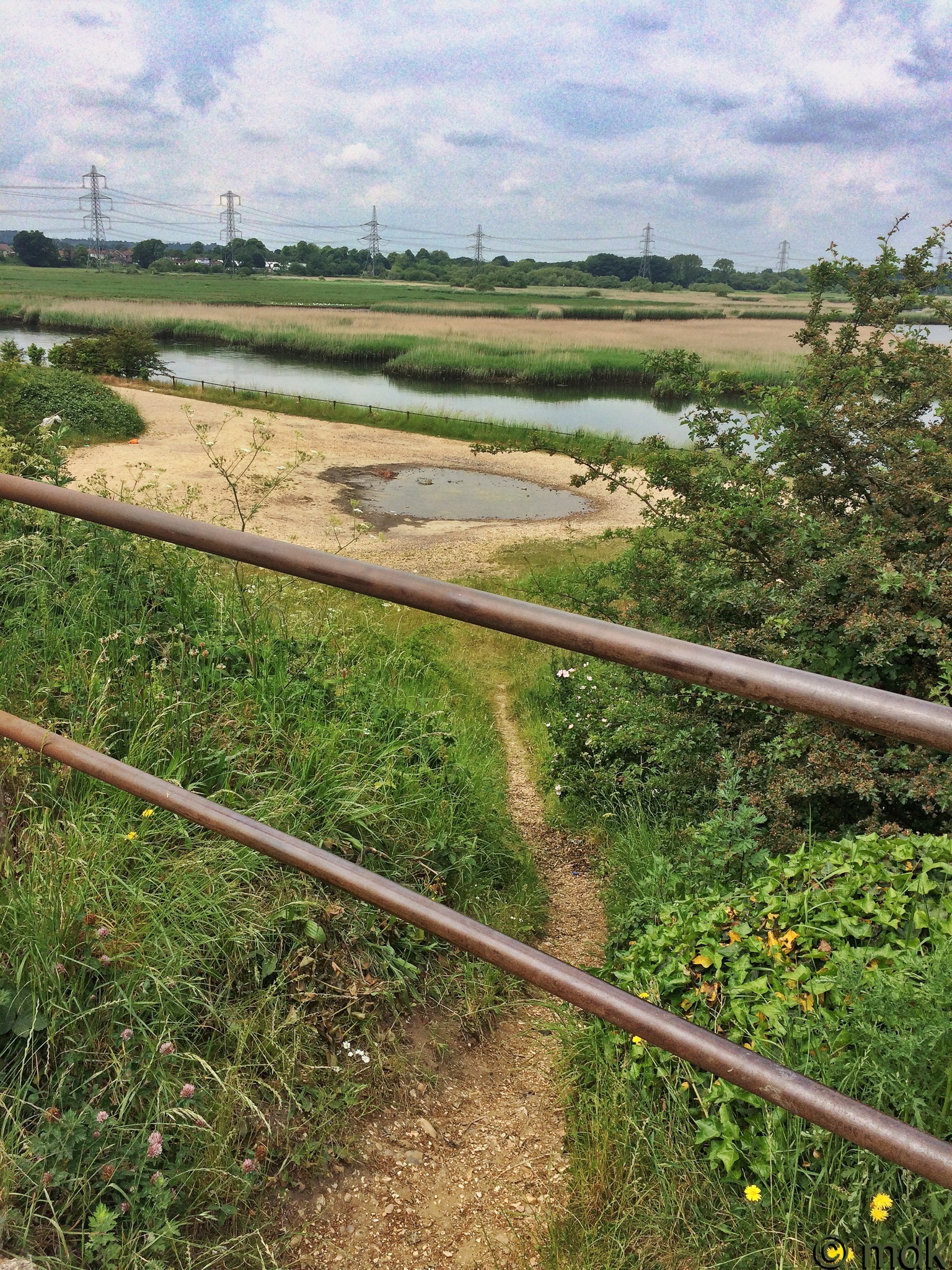 The descent was slow and slightly precarious because the slope was far steeper and more uneven than it looked from the top but soon enough we were at the bottom. Now we were no longer on the causeway but we weren’t actually on the bridge either. This was a kind of nomansland, an island, half mud, half gravel between the two. In front of us, on the medieval five arched bridge, a man was fishing. This is a favourite spot for fishermen and, if you can ignore the traffic roaring across the flyover, it’s a pretty one too. 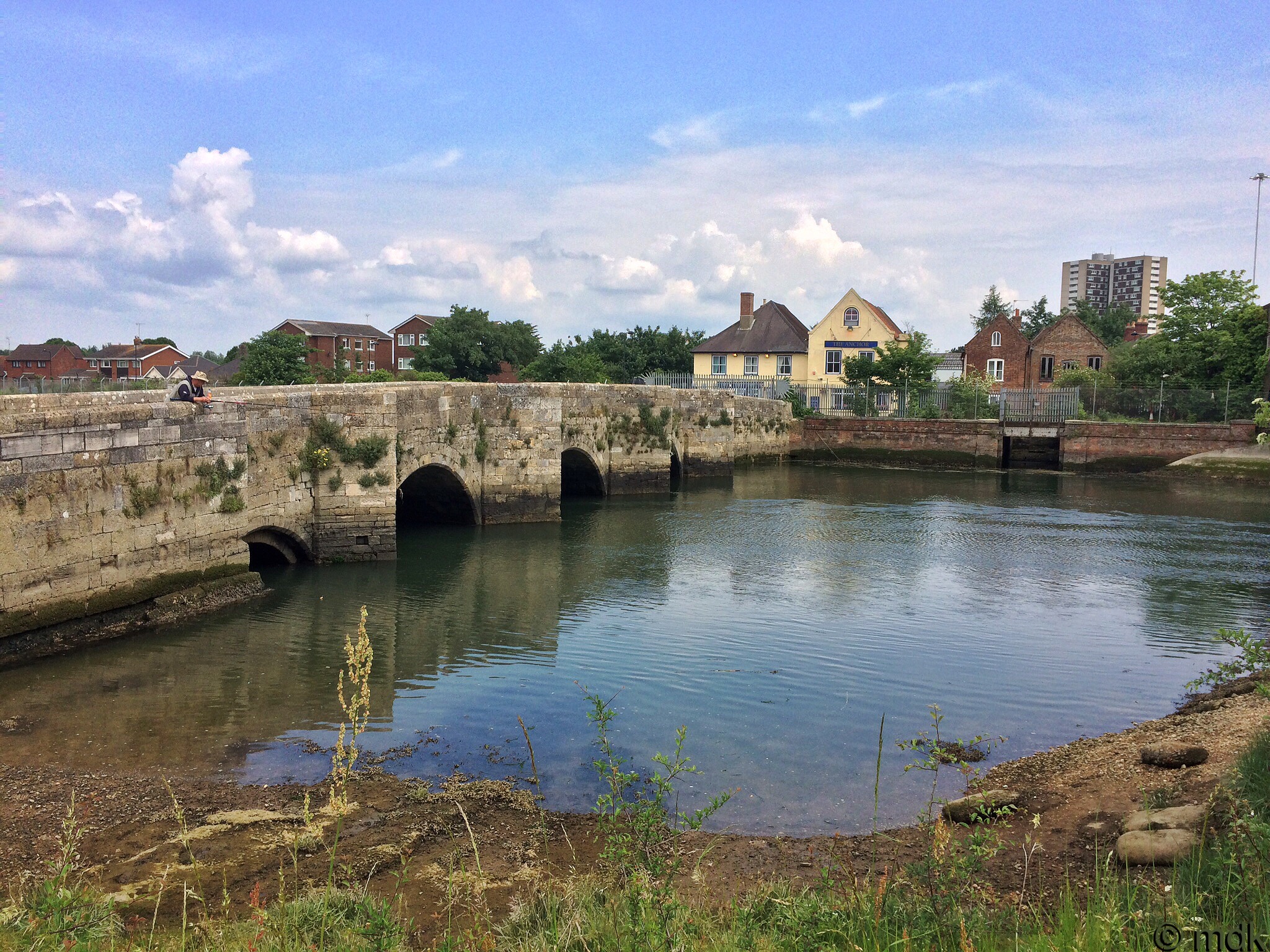 “It’s not very red is it?” Matt observed.
“No it’s not,” I agreed, “I wonder why it was called red bridge?”
Later I discovered the answer. Back in medieval times, when the old bridge was built, this was already an important crossing point over the River Test, not a bridge but a ford. Exactly when the bridge was built is a mystery but the nearby settlement was mentioned in the Domesday Book of 1086 as Rodbridge. It seems the rod or red part of the name actually refers to the reed beds in the marshes beside the bridge. Even today reeds used for thatching are still harvested here. 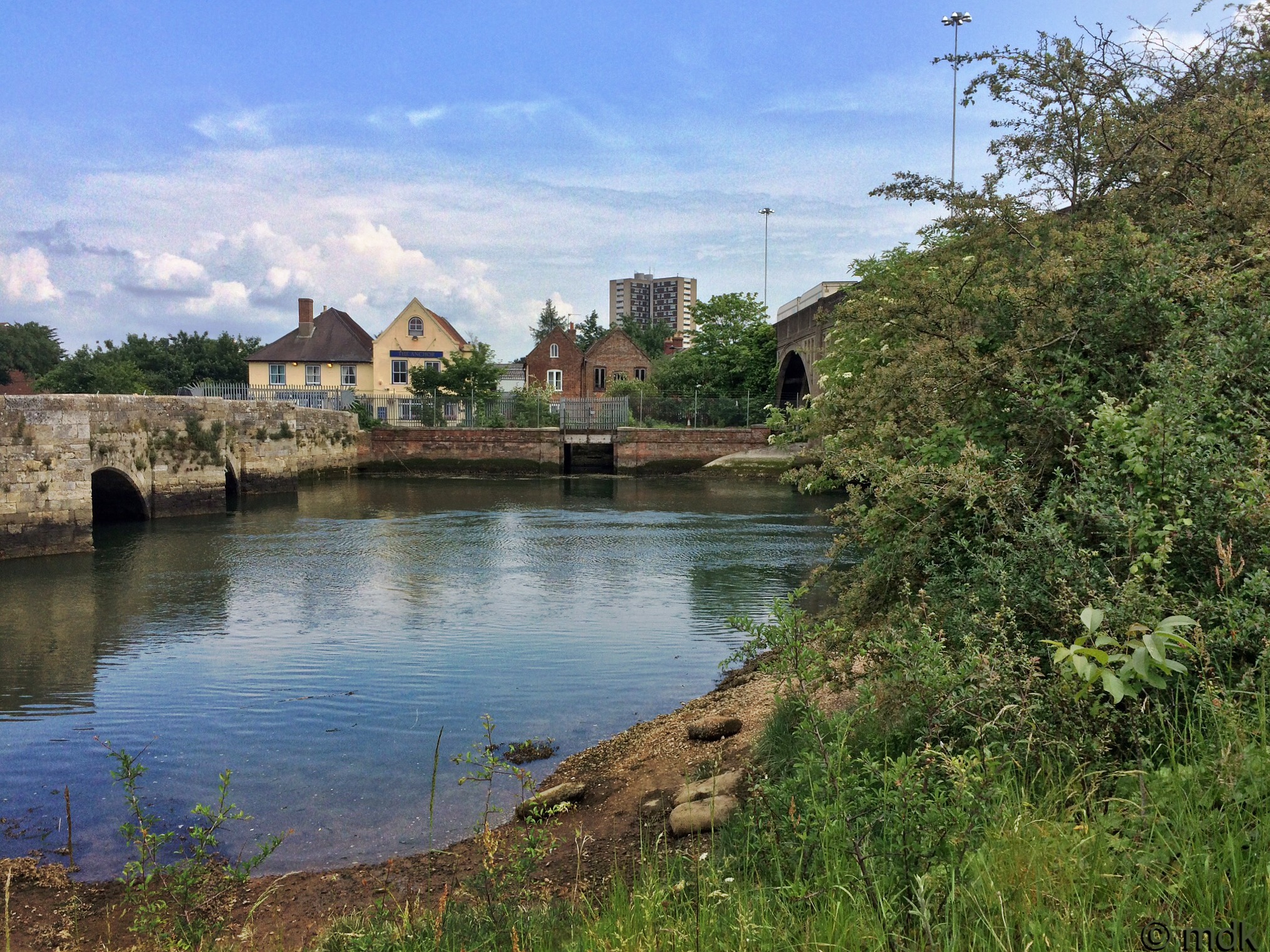 Of course it wasn’t really the bridge we’d come to see but what was on it but, on the way down the slope, Matt had spotted something unusual in the long grass to our left. Turning our backs on the bridge and the stone we went to investigate. The flash of colour he’d seen turned out to be a glorious, but rather out of place, oriental poppy blooming beside a cluster of white nigella. How either got there is a mystery but they certainly brightened up the grassy bank. 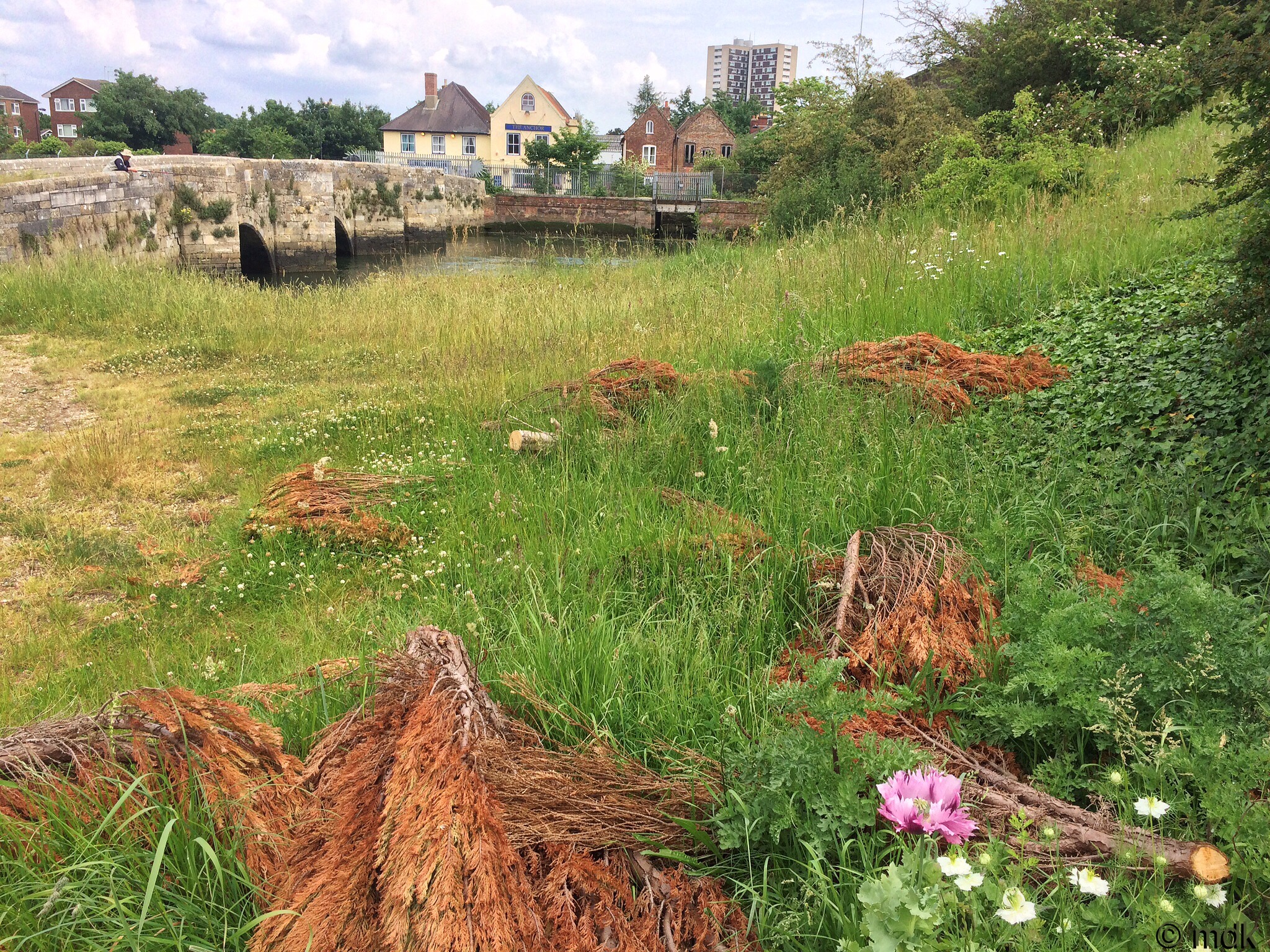 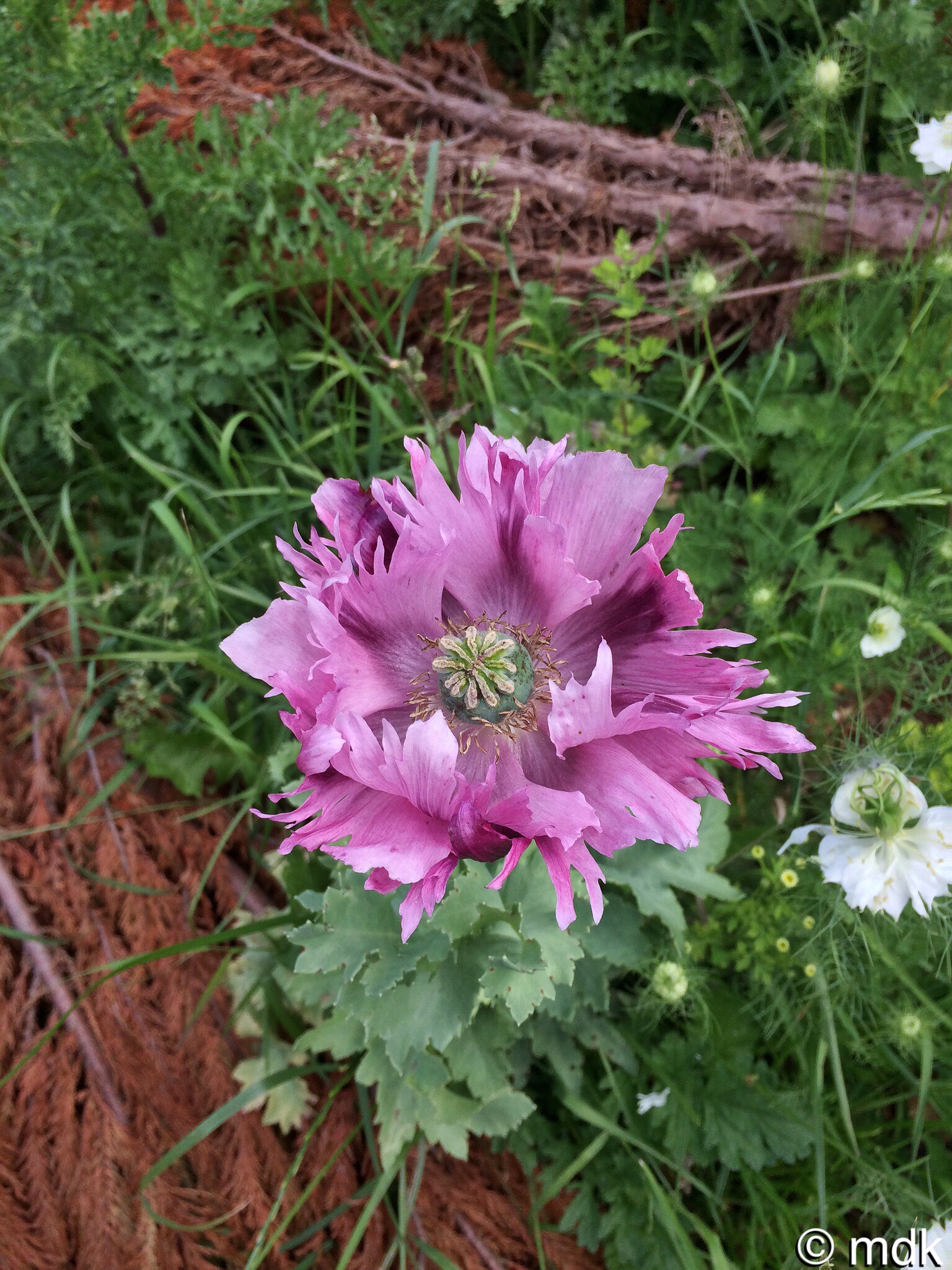 As far as I could tell the boundary stone was somewhere on the five arched bridge, although I wasn’t sure where.
“Hopefully it won’t be too hard to find,” I said, “or the fishermen are going to wonder what we’re up to.”
As it happened, we found it almost at once, in the third of the little triangular bays that jut out between the arches of the bridge. Of all the stones I’ve found this is in the best condition with barely any moss or algae and easily visible in the grass. It’s also the first I’ve found that isn’t surrounded by a border of cobbles. 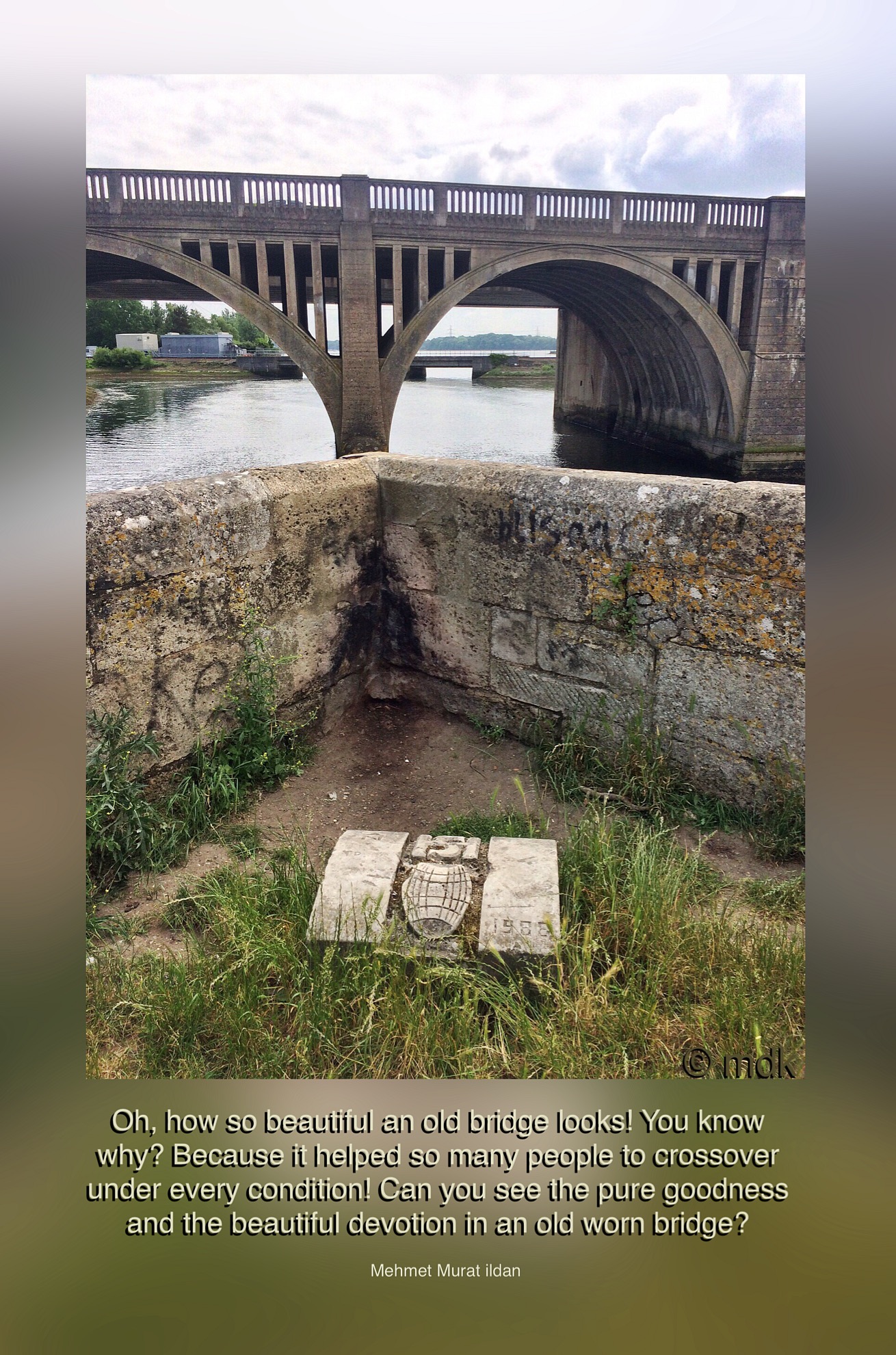 We stopped long enough for me to take my photos and, with a look back at the traffic passing over the flyover above us, headed back the way we’d come. The medieval bridge is now a bridge in name only, it isn’t possible to cross it and actually get anywhere. 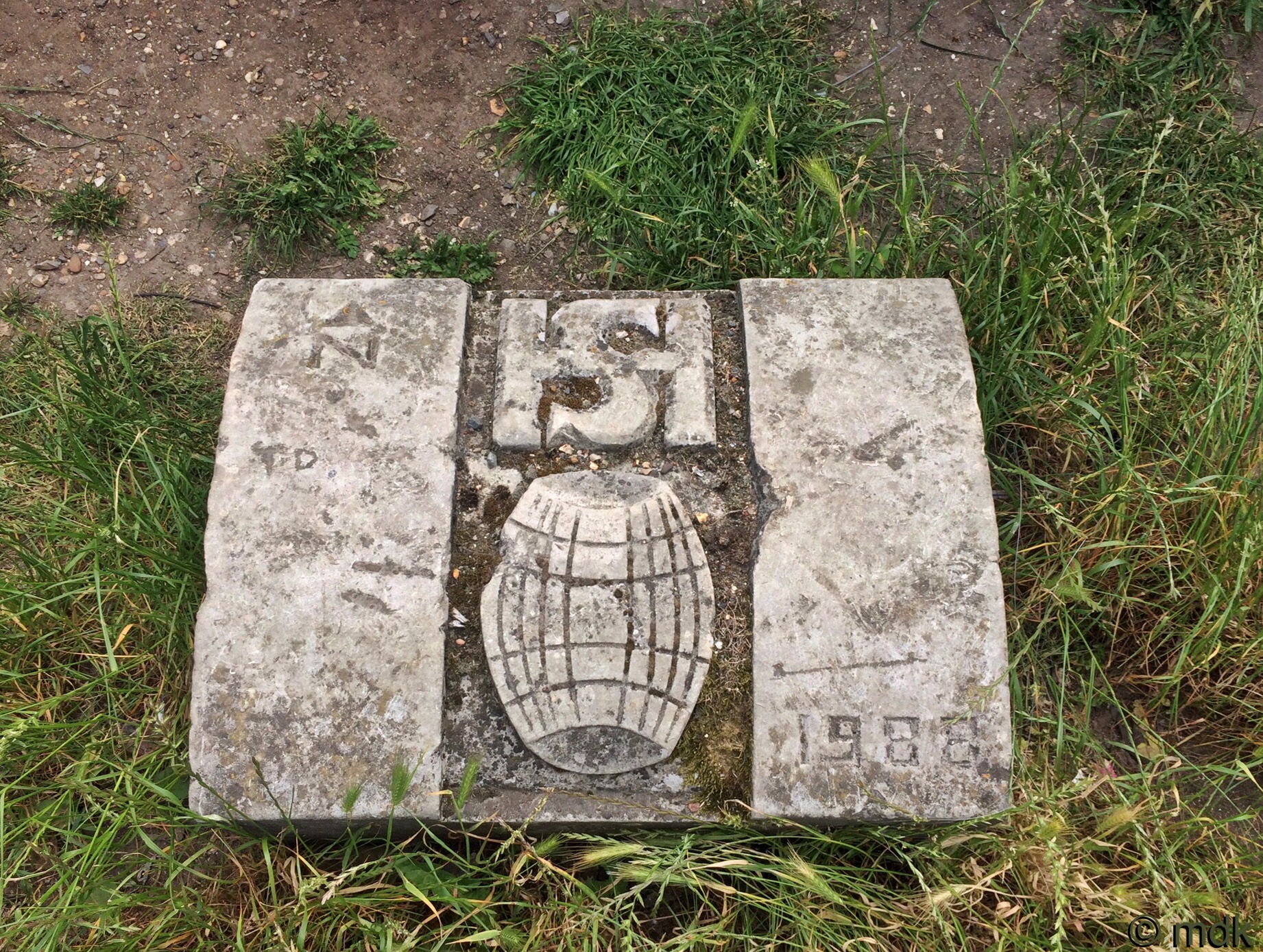 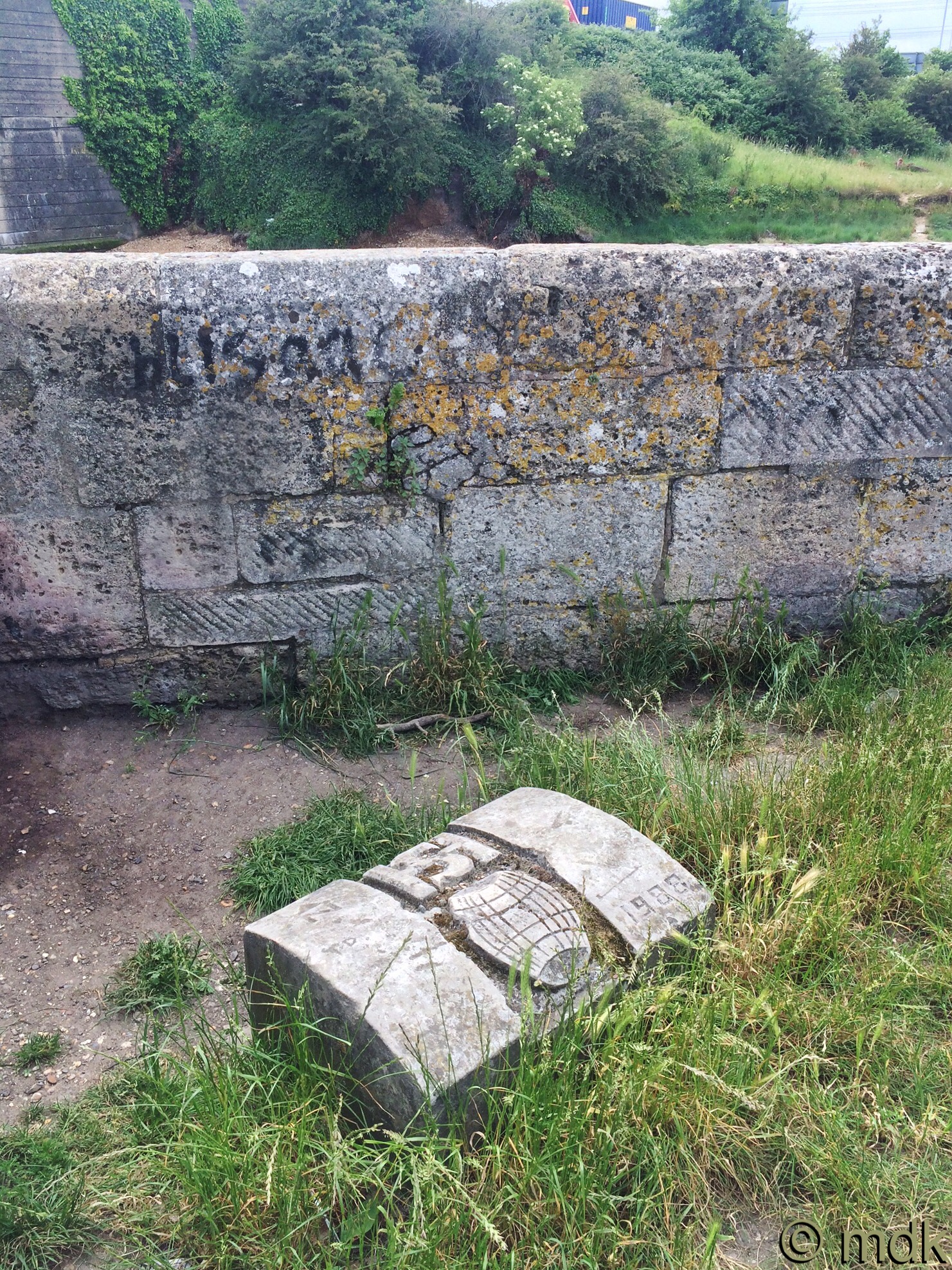 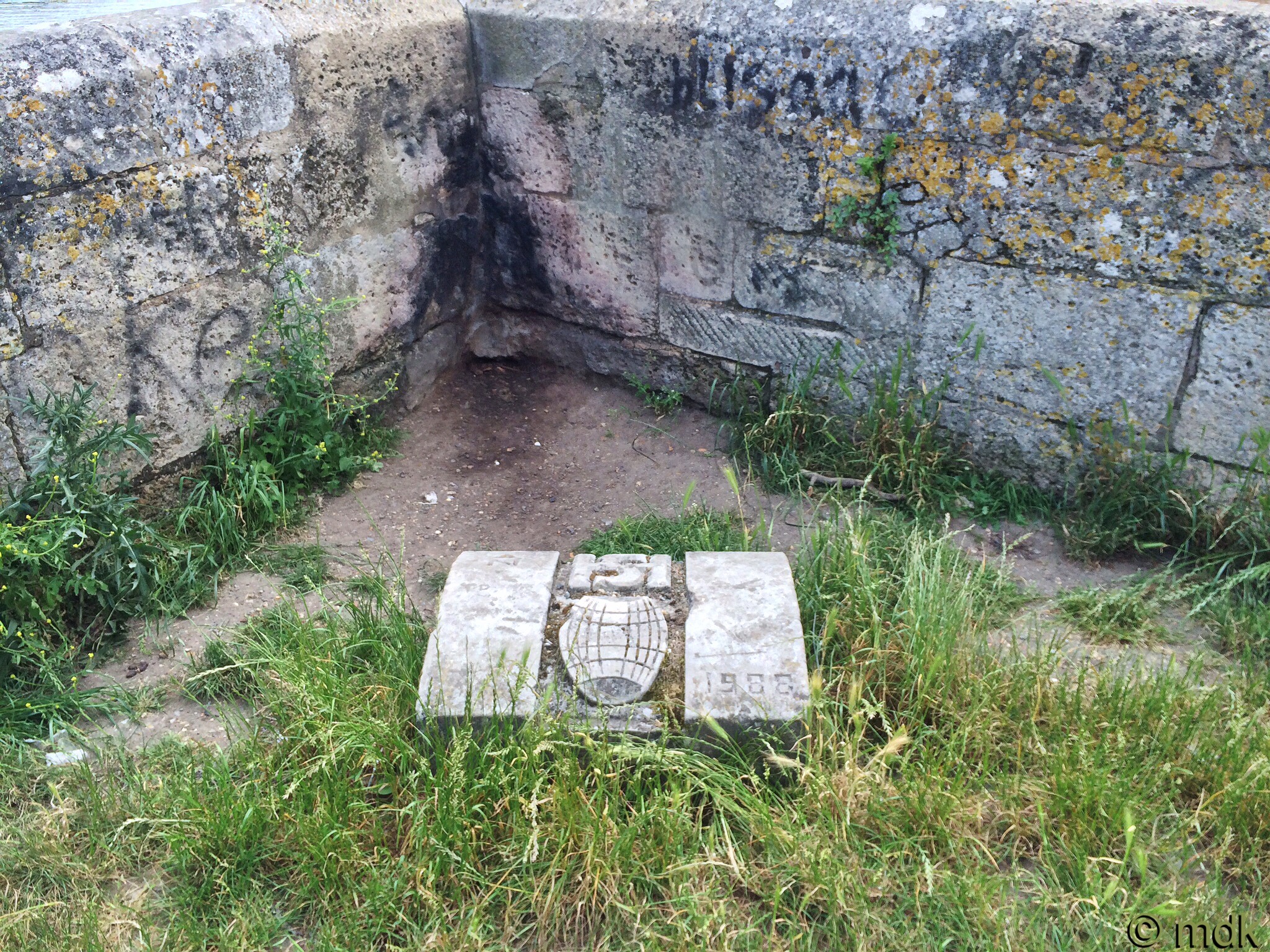 When it was built the bridge was an important crossing point and the small settlement of Redbridge soon grew. Ships were built here, most famously for William III’s navy. When, in the 1790’s, the Andover Canal was built, it became an important trading post for coal, timber and corn. In 1793 a second, single span bridge was built, allowing boats to pass from Southampton Water to the canal. Now we were heading towards it, going ever further from Matt’s house. 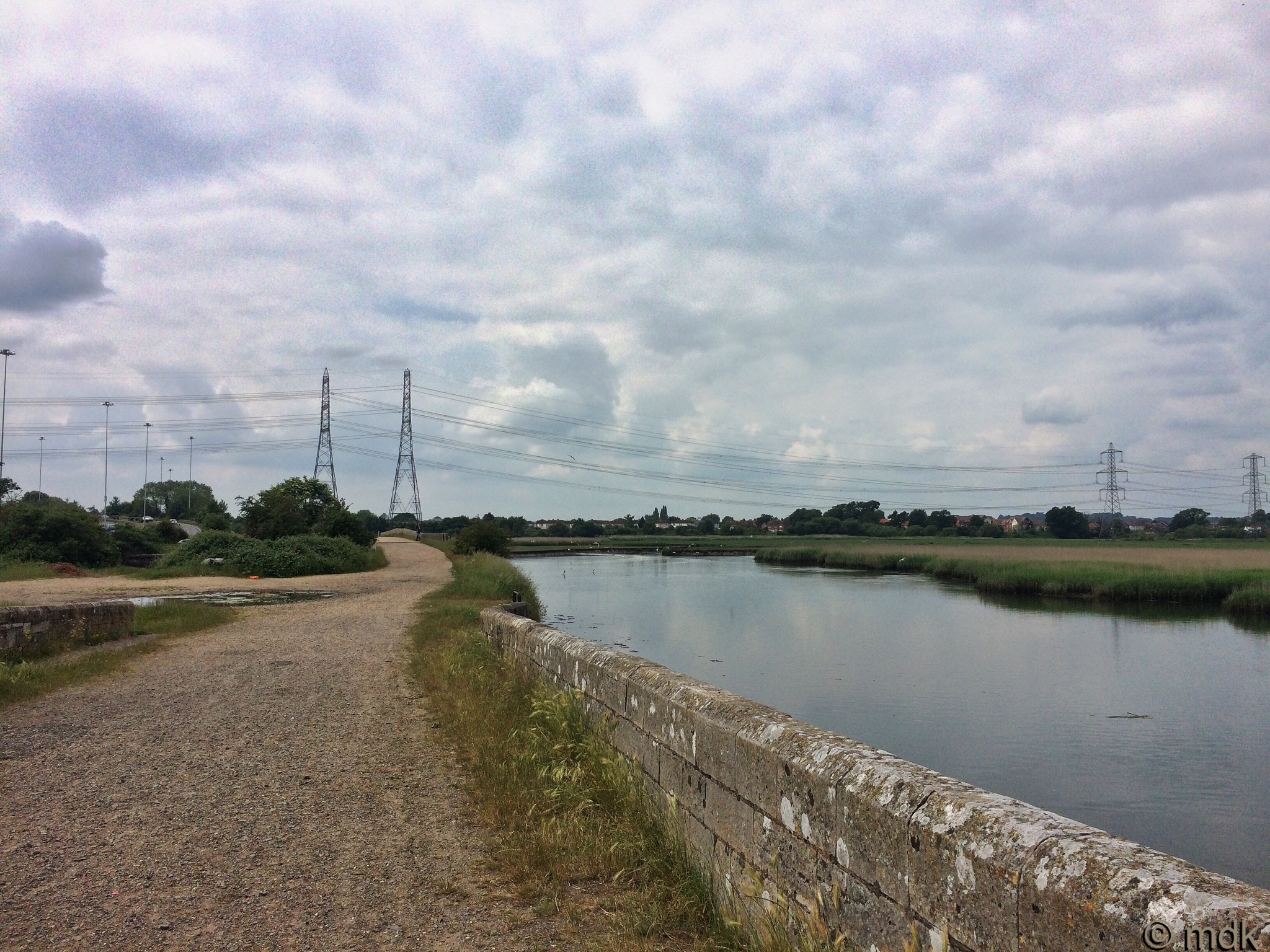 Things began to change for the little bridge in 1859 when work began to convert the Andover Canal into a railway line. The Sprat and Winkle Line opened in 1865 and, twenty years later, a level crossing was built in front of the Anchor pub. For a while carts and then cars still crossed the bridge. By 1930 though, a new flyover was being built and soon the old bridge and the newer single span bridge fell out of use. These days even pedestrian access where the level crossing used to be has been blocked off. It seems a bit of a shame to me. 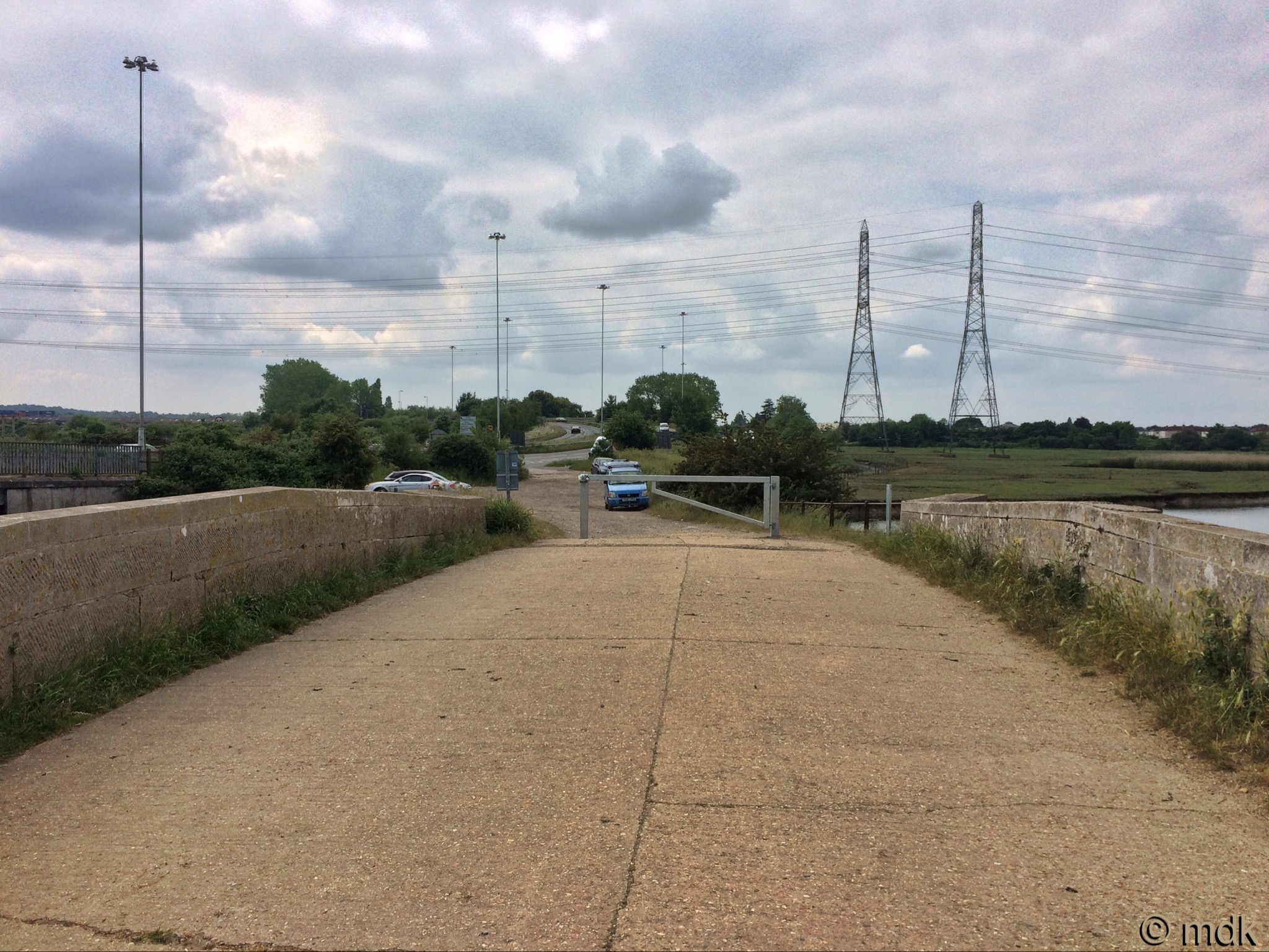 In the 1970’s a second carriageway was added to the flyover. From the single span bridge we had a great view of it, along with the distant cranes of Southampton Docks. 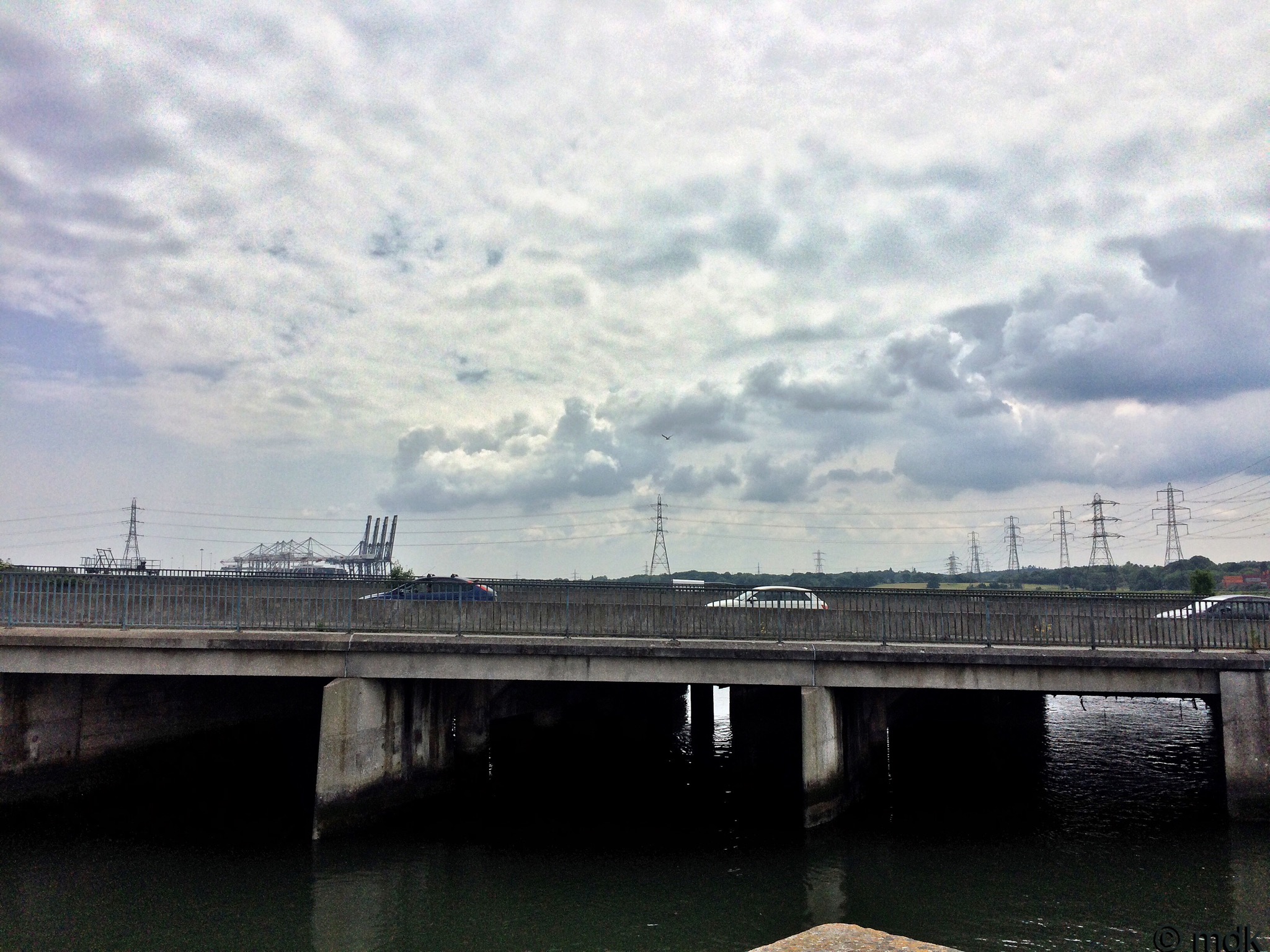 Now both the old bridges have become an anacronism, bridges to nowhere frozen in time and used only by fishermen and maybe the odd bird watcher. With our backs to the traffic we could look over the reed beds and, if we ignored the strings of pylons marching across them, feel we’d stepped back in time. To the right lay the city of Southampton, tall tower blocks, docks, hustle and bustle. To the left was Totton, not as big but still a busy, modern town. We were caught between the two in a bubble of history. 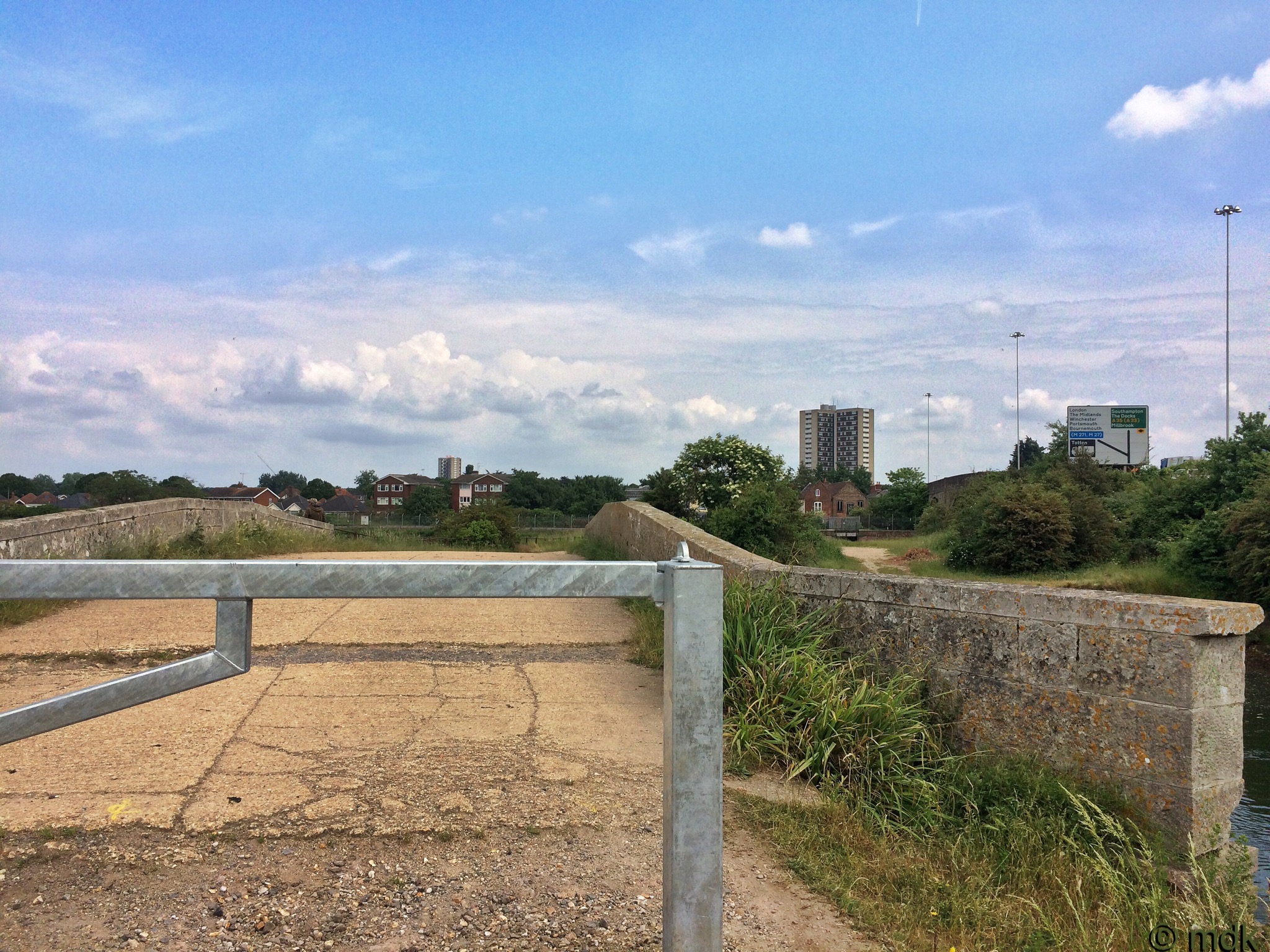 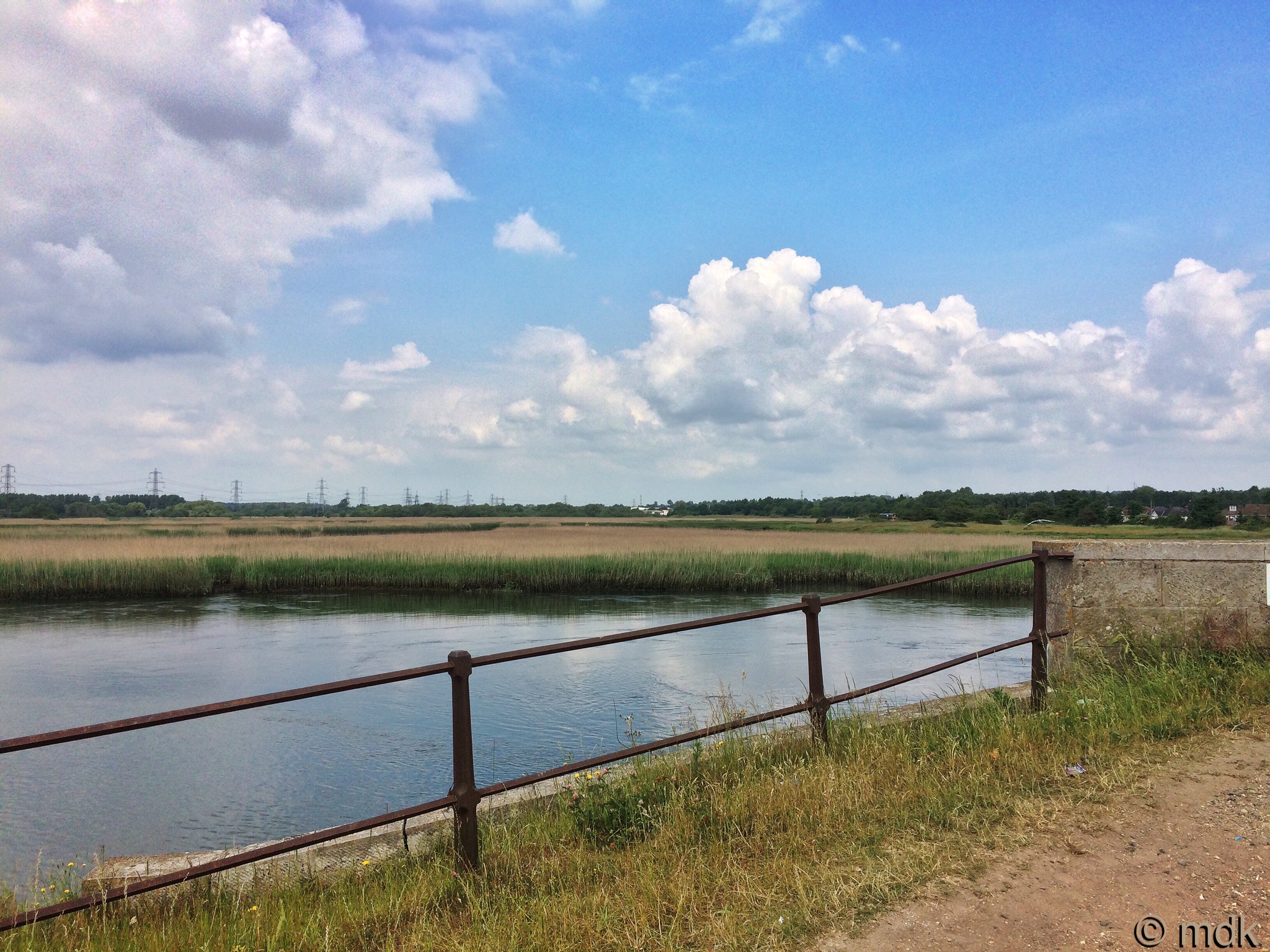 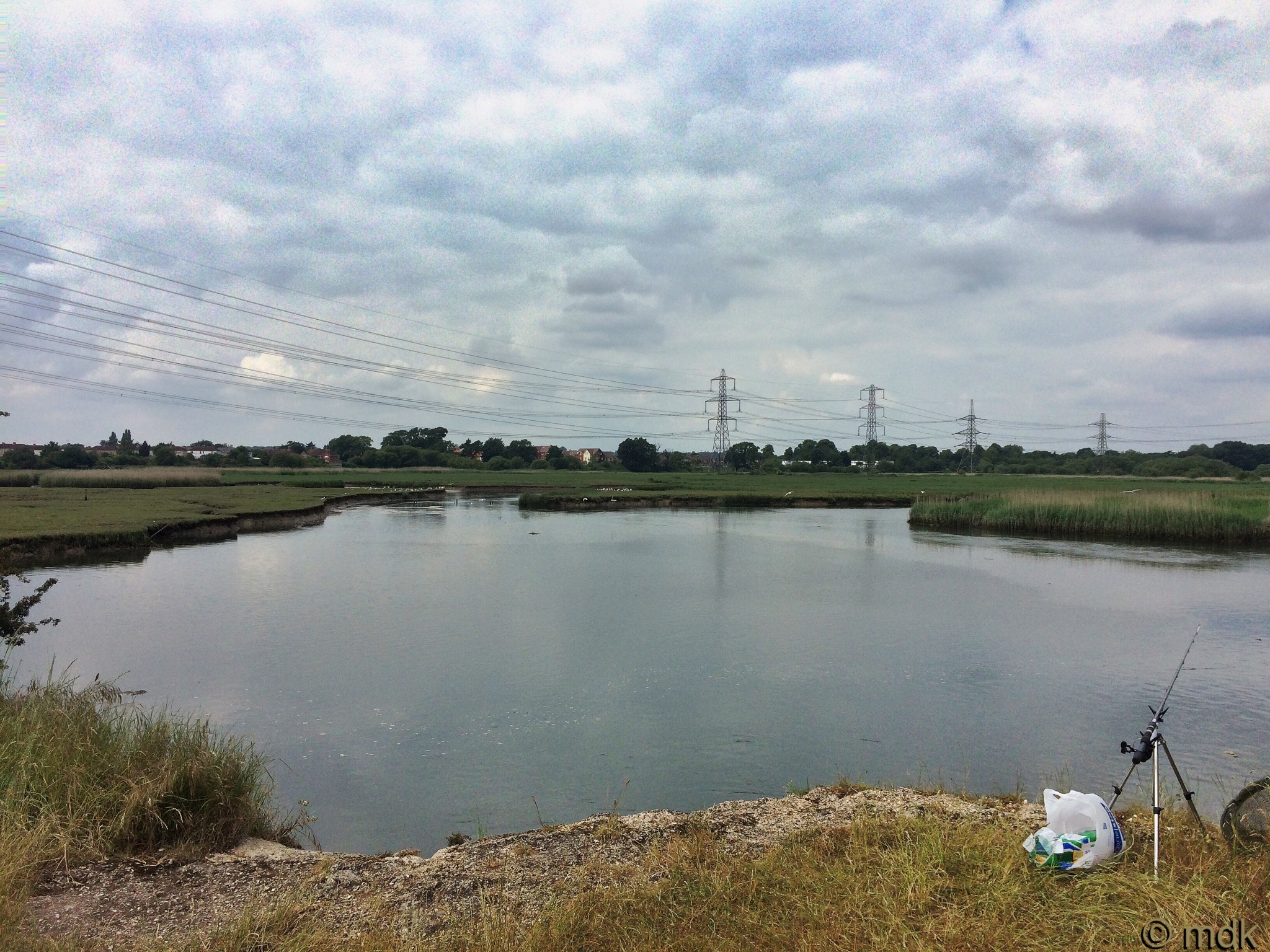 On the other side of the bridge we burst out of our bubble and rejoined the modern world of fast cars and busy roads. There was a part of me that wanted to stay on the bridge to nowhere back with the fishermen and the old days. Of course I shall have to come back because CJ hasn’t seen boundary stone number eight yet. In fact I might have to pretend I haven’t either and keep this visit a secret. 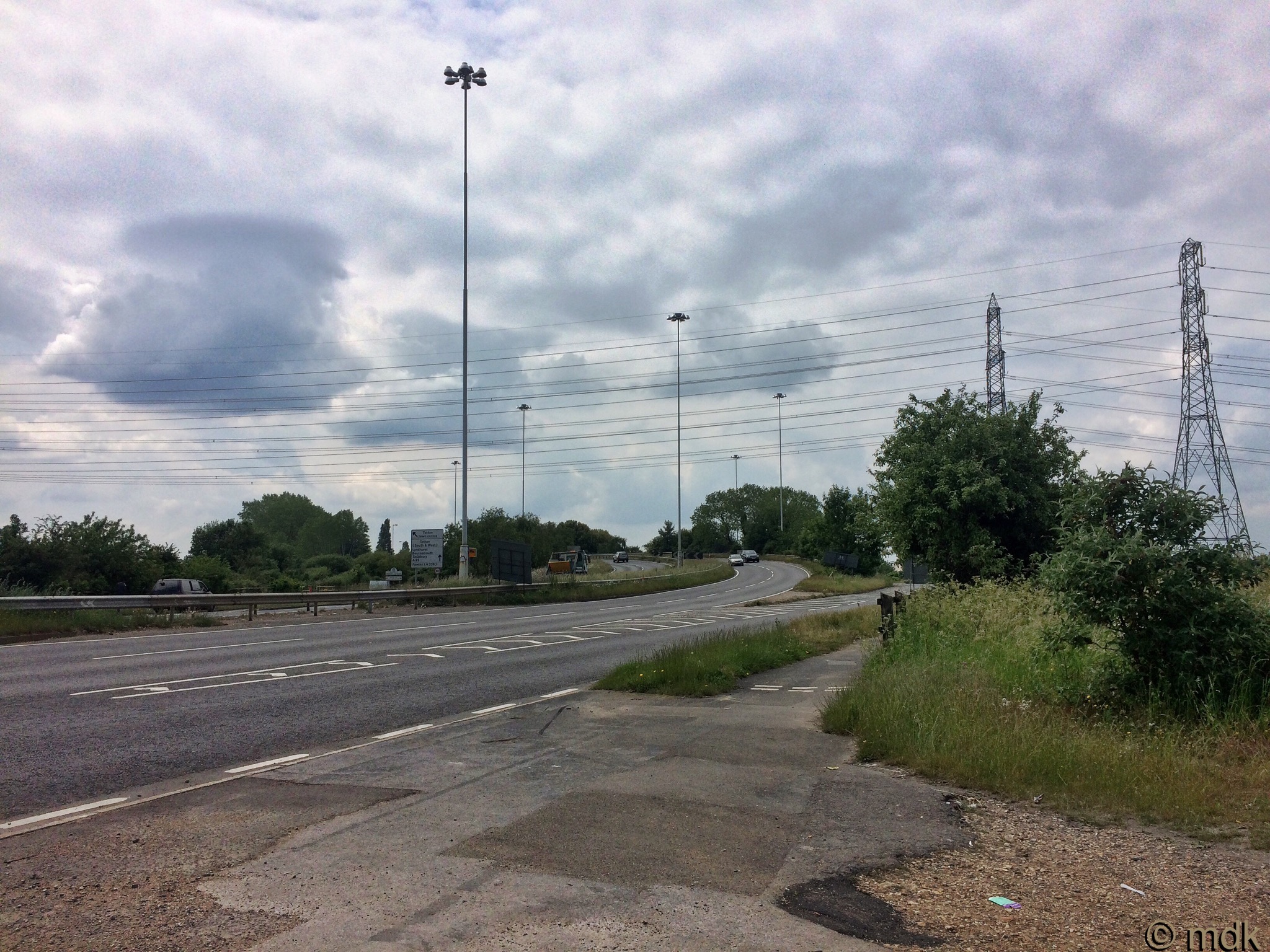 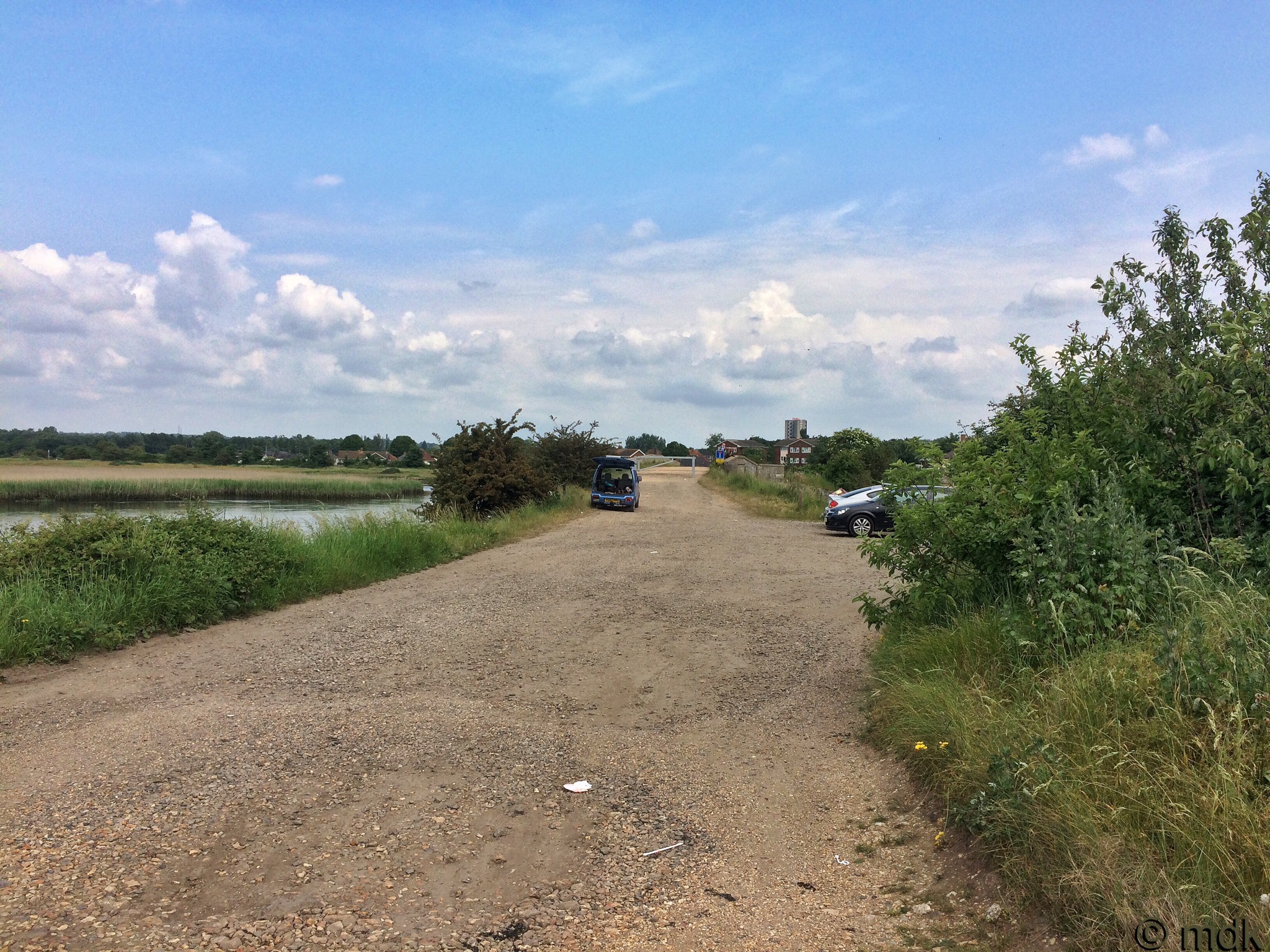 12 thoughts on “Family, secrets, mysteries and bridges to nowhere”