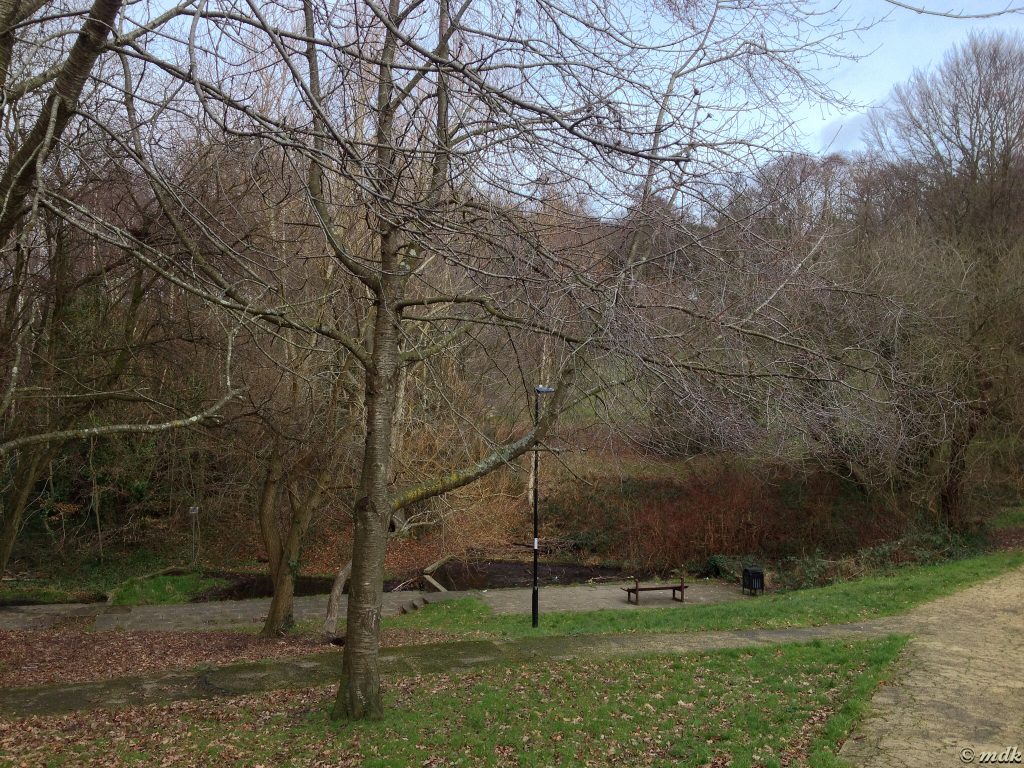 When I pledged to walk one hundred miles every month in 2014 I forgot about February with its pesky twenty eight days. Of course this meant I was going to have to up my daily average if I wanted to hit my February target. WIth a few sums I worked out it was just over three and a half miles a day. Walking the Christmas weight off wasn’t going to happen before summer unless I made more effort.

It was time to get building up the February miles with a little Sunday walk. Normally I have a plan. Today I didn’t. For a while now I’ve been wanting to explore some of the trails at Hum Hole so I thought I’d start there’s and see where it led me. For once the sun was shining and the sky was blue, well blueish, perfect Sunday walking weather. The trails were wet but not so bad as to be a problem and I set off quite confidently. I even managed to spot some fungi just off the path, all browns and greens, really quite pretty. Some of them may have been turkey tails but I’m not sure. One little patch of crocus surprised me, I hope the frost doesn’t get to them. 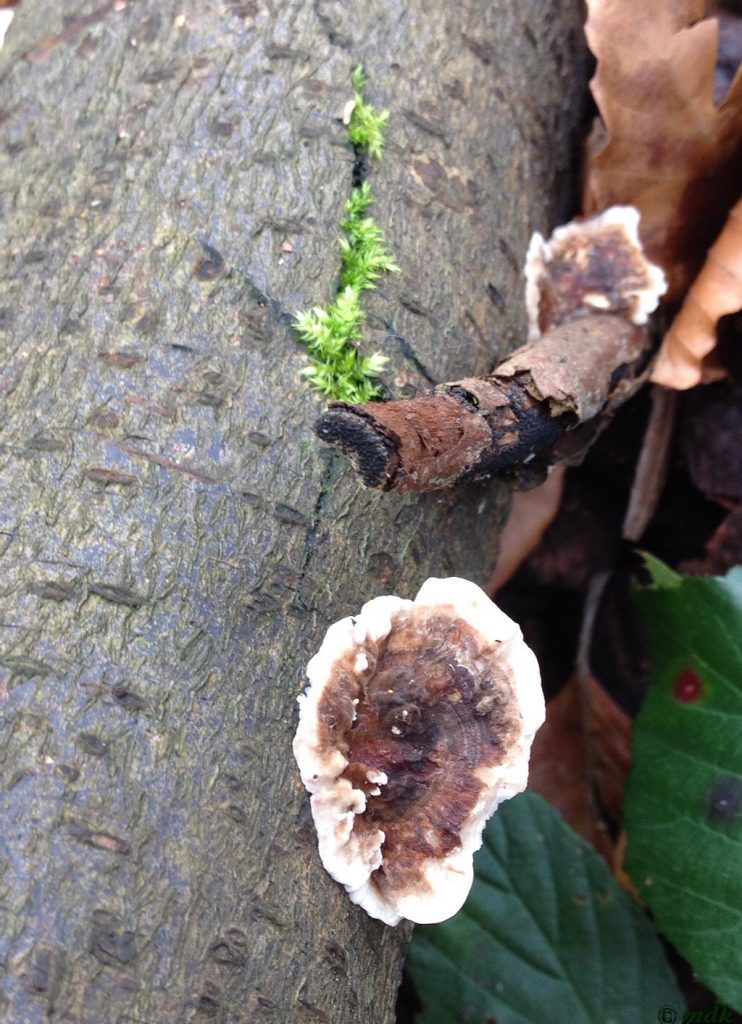 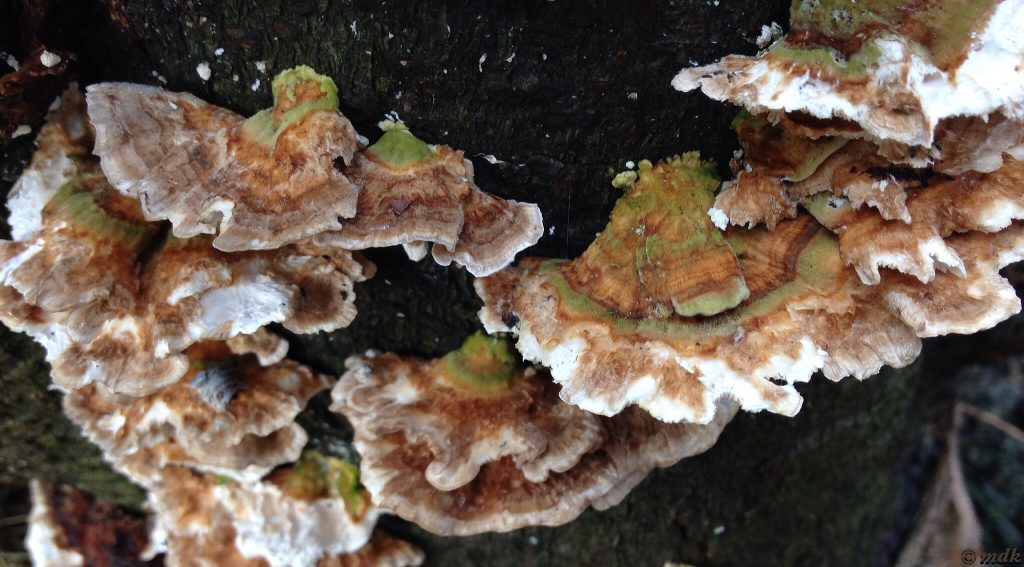 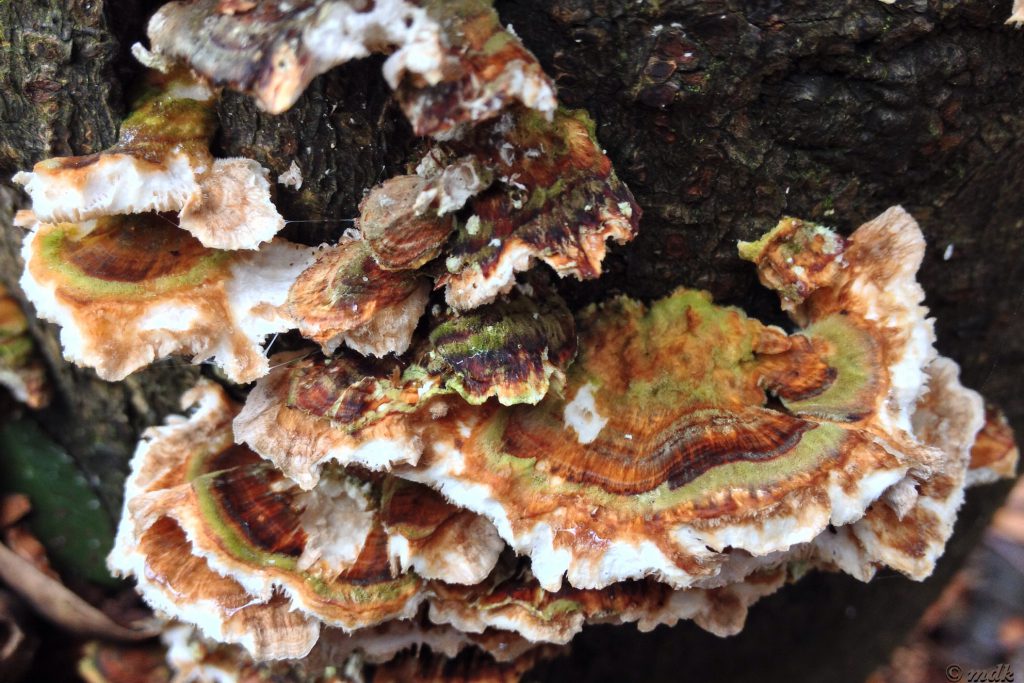 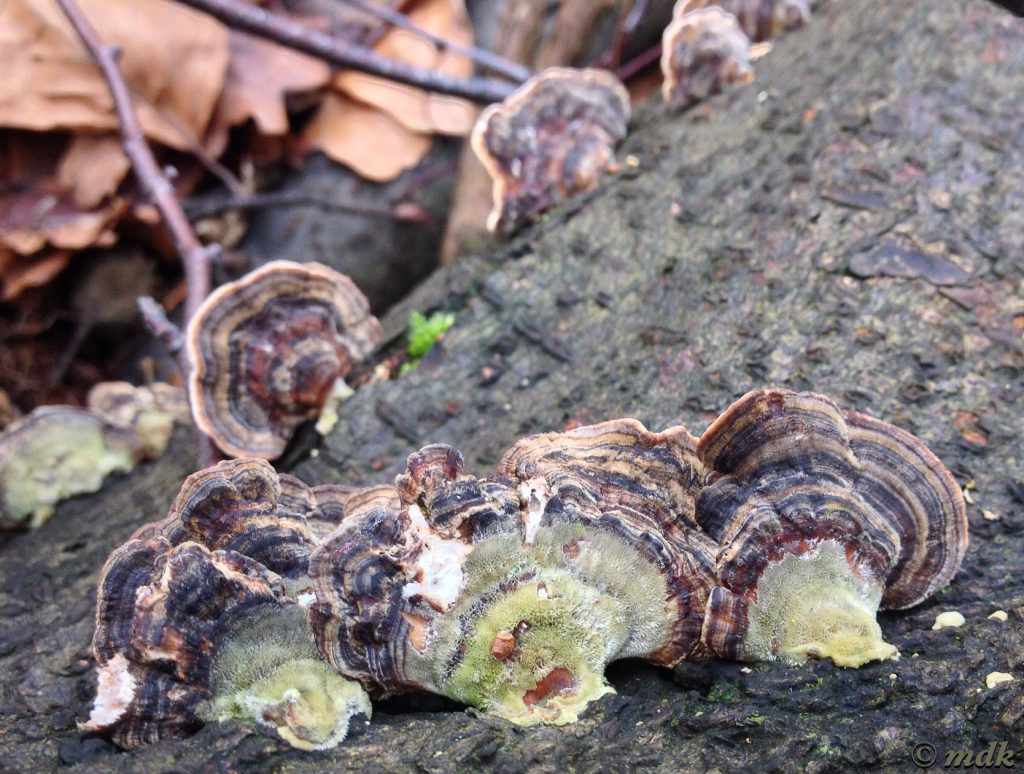 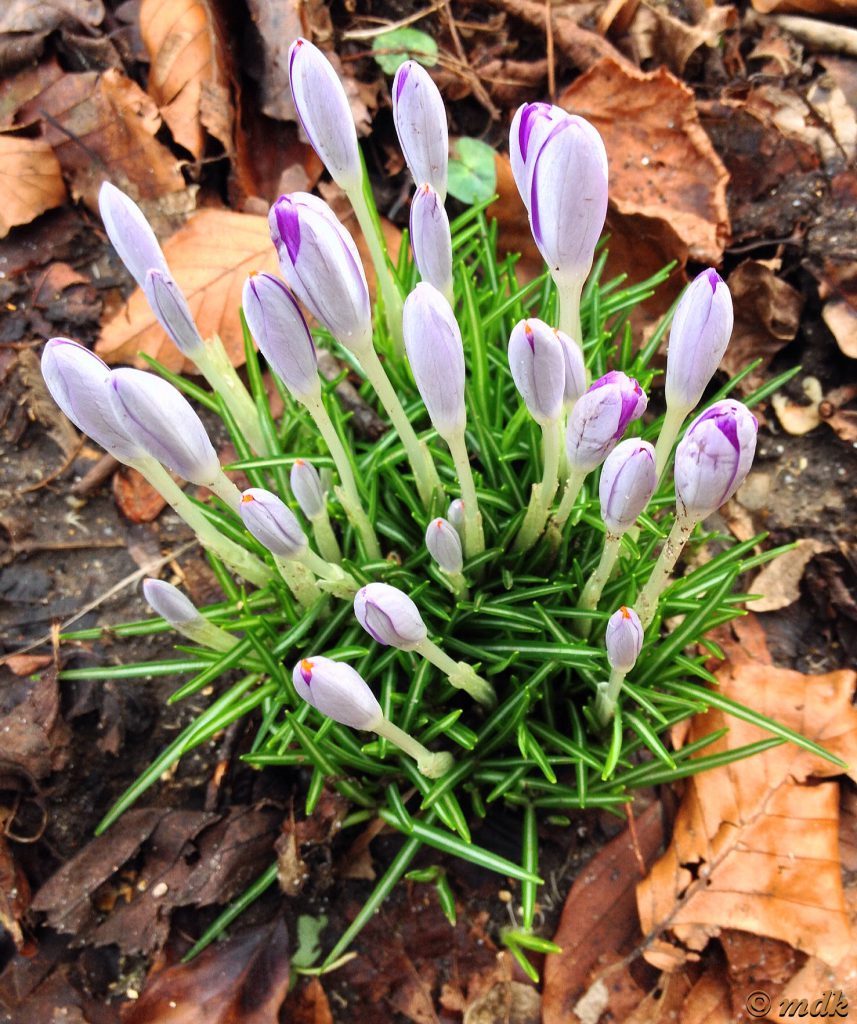 The trail I chose brought me out fairly close to the top of Cutbush Lane so I thought I’d go that way. What I didn’t think about was where this would lead me, the river, or the possibility of hitting floods. That didn’t cross my mind until I got to the bottom of Gaters Hill and saw the flooded woods beside the road. This was shortly before I saw the Itchen sprawling across the path by the White Swan. By then it was too late, there was nowhere else to go unless I turned back. Turning back is not really my thing, especially up steep hills. 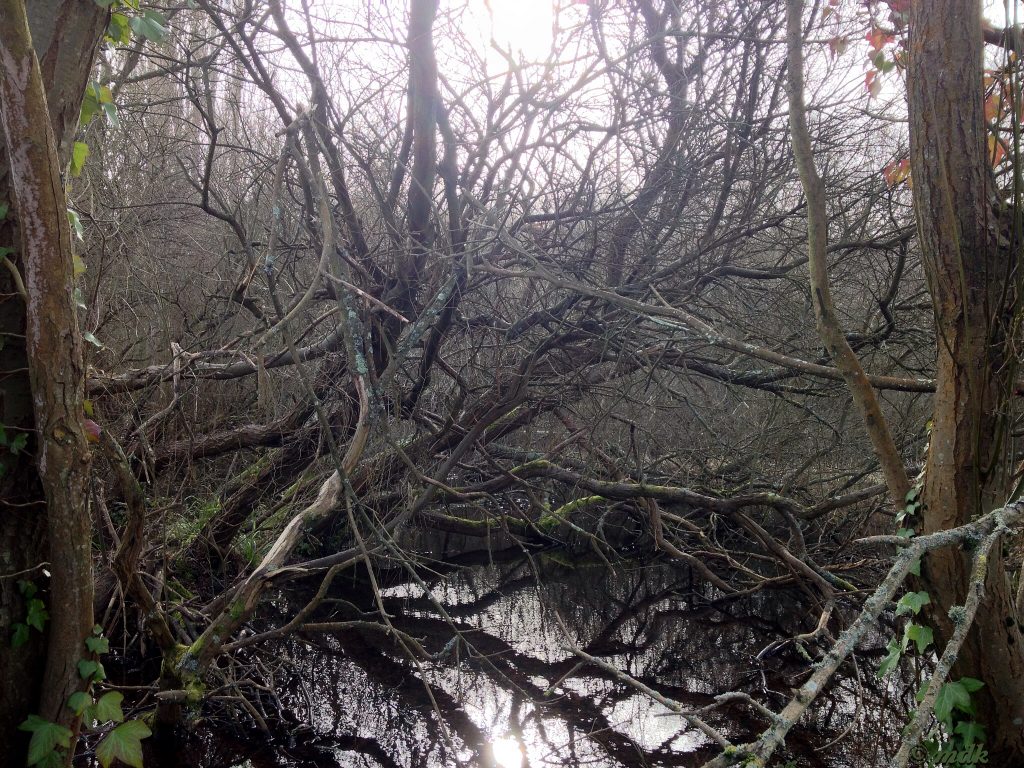 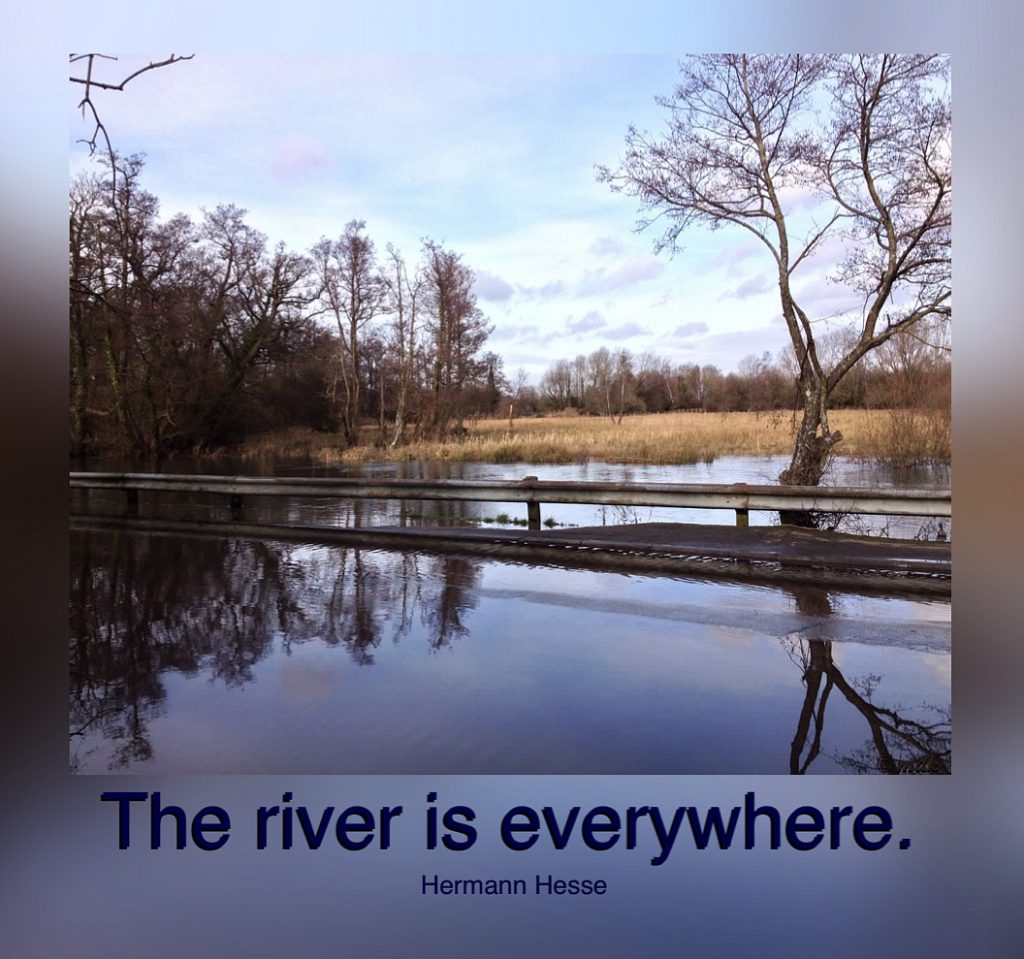 The White Swan was closed, as I knew it would be. A sign outside told me this was due to flooding. No shit Sherlock. A few people were milling about outside looking lost. Maybe they’d been looking forward to Sunday lunch sitting beside the river, rather than in it. After a quick peek through the pub windows to see chairs piled on tables and big puddles on the floor I splashed past towards the bridge. It must be soul destroying for the poor landlord to have the river invade his business on such a regular basis. A quick look through the fence showed the little garden at the back of the pub awash. Looking back a little further along I could see the swirling flood water lapping at the pub. 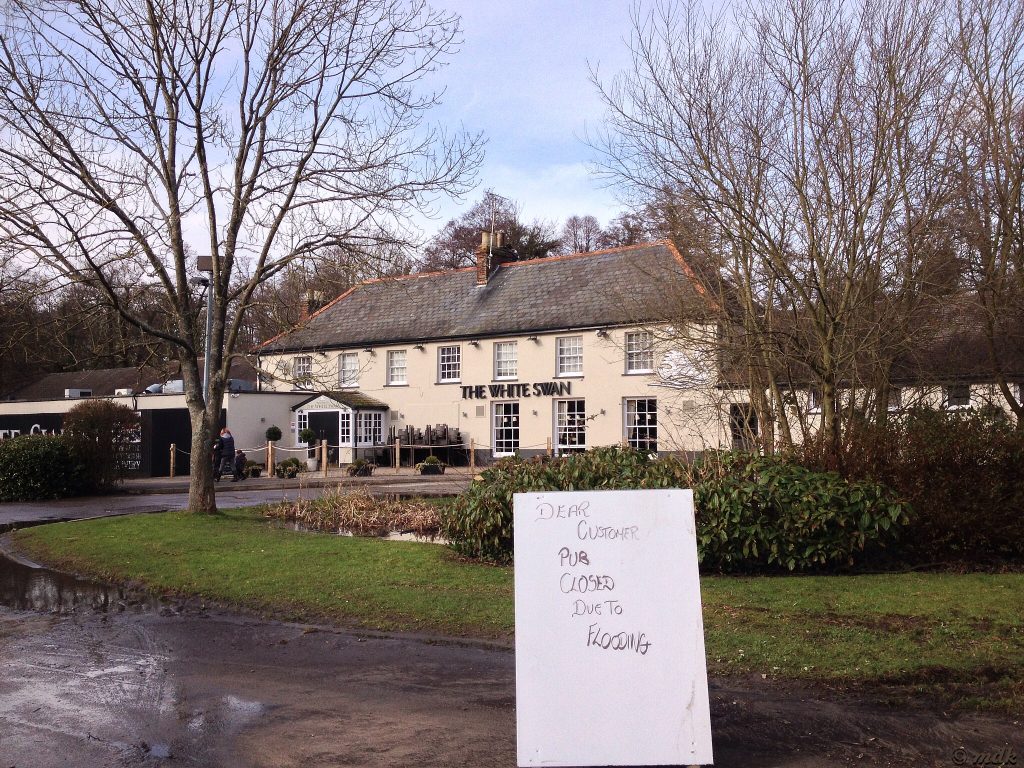 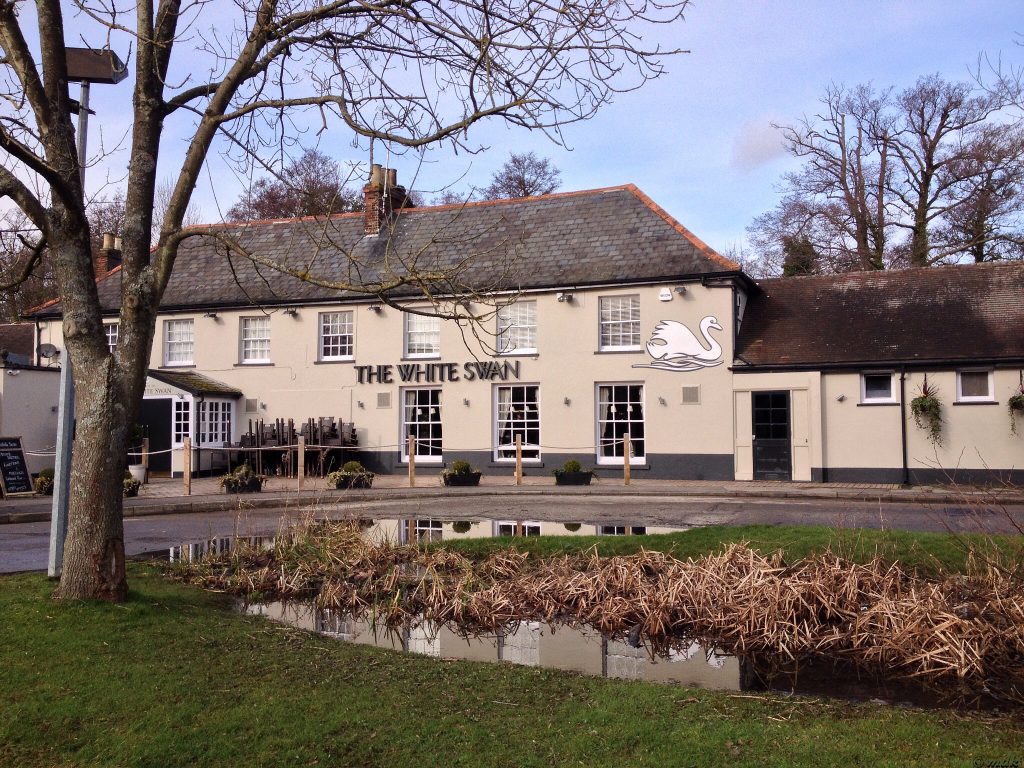 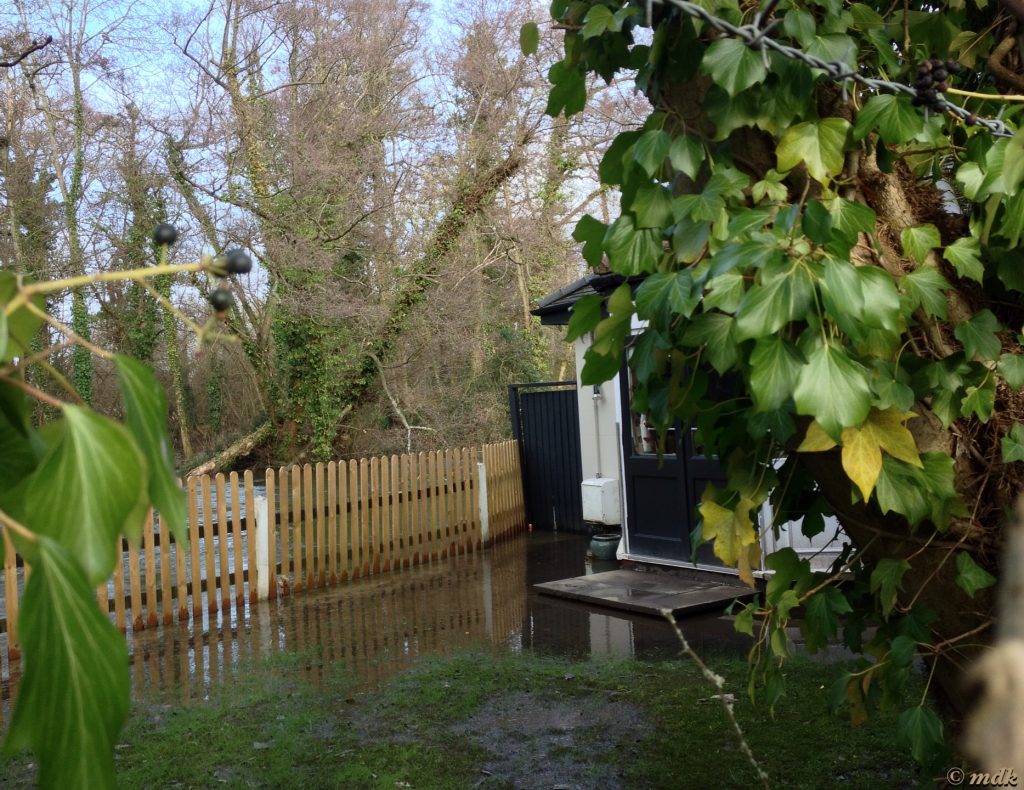 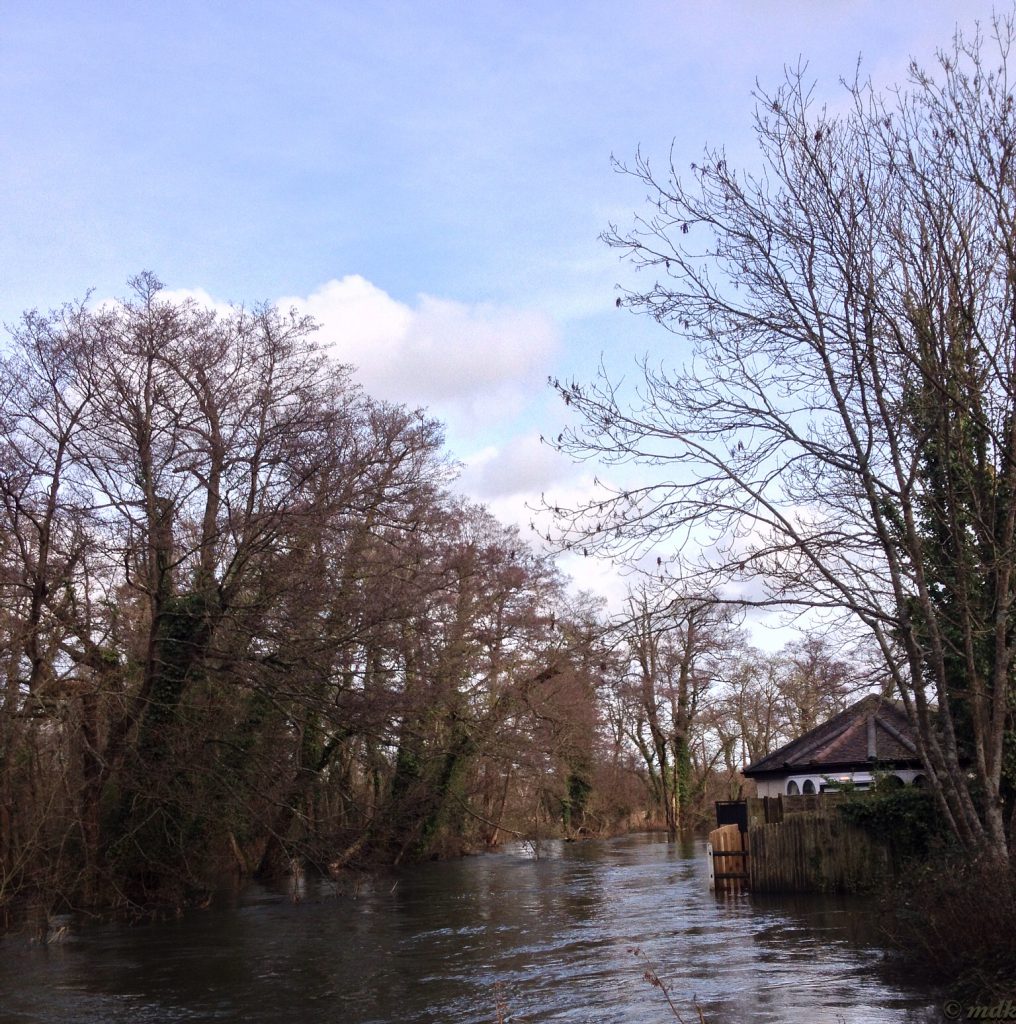 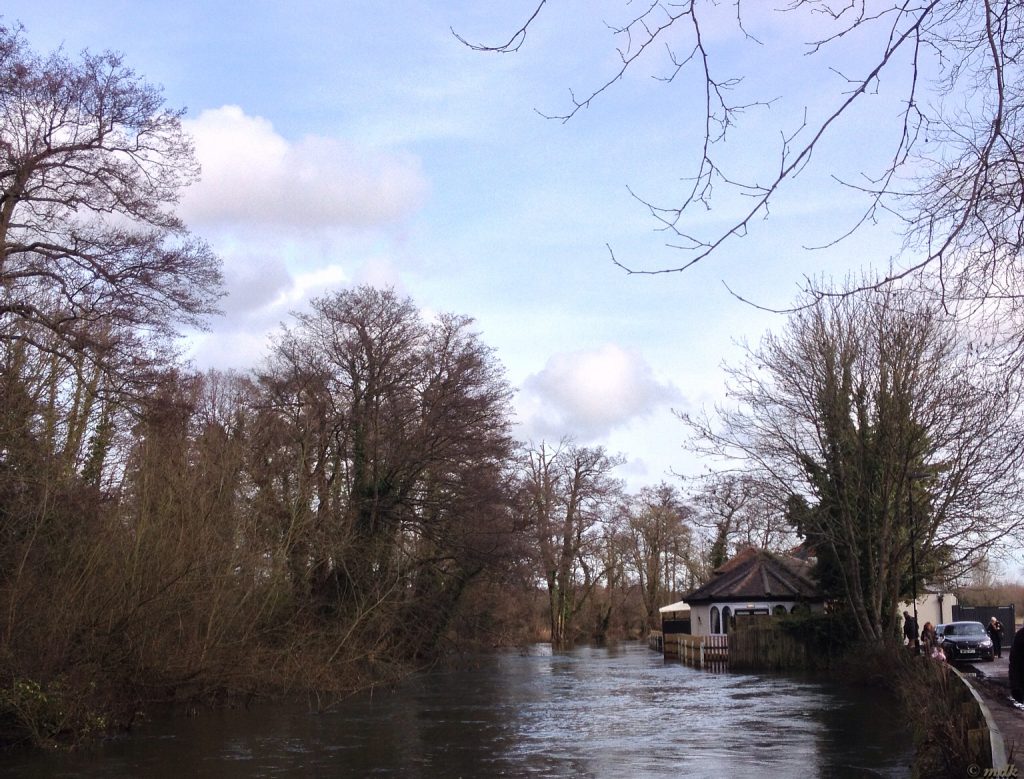 Down by the bridge the river was at least contained within its banks, although a huge puddle on the path meant walking across the grass. Up on the bridge I could see the path was flooded further down but it didn’t look too bad, people were walking through. Below me the river was churning and boiling a mass of eddies and little whirlpools. A few other walkers were looking over the bridge uncertainly. I watched for a while then set off to brave the flood. 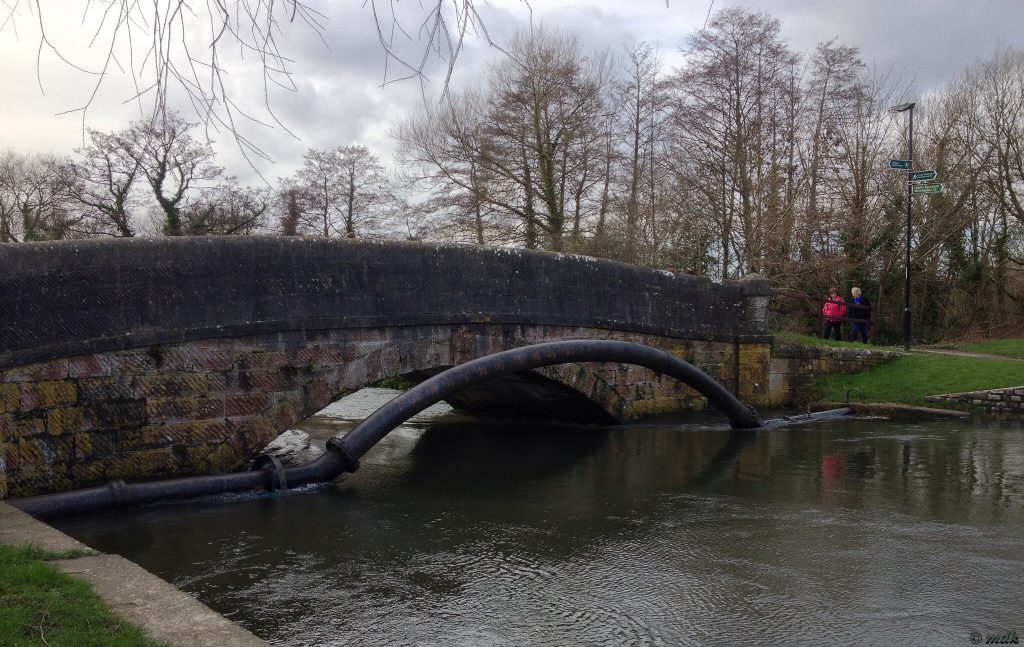 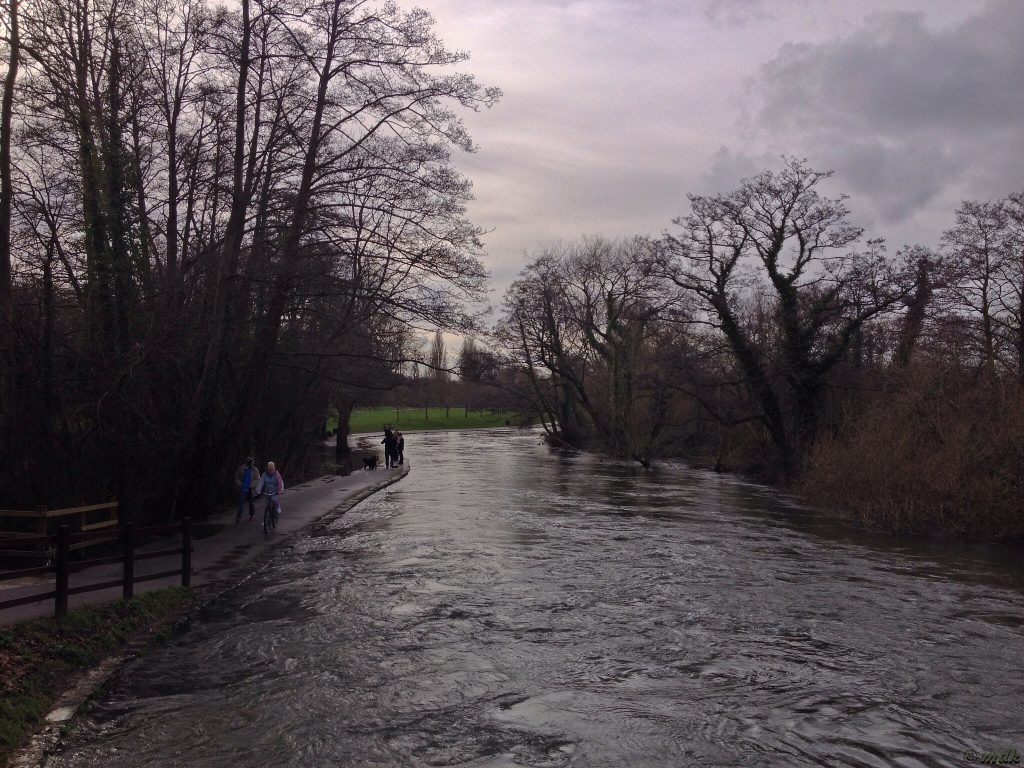 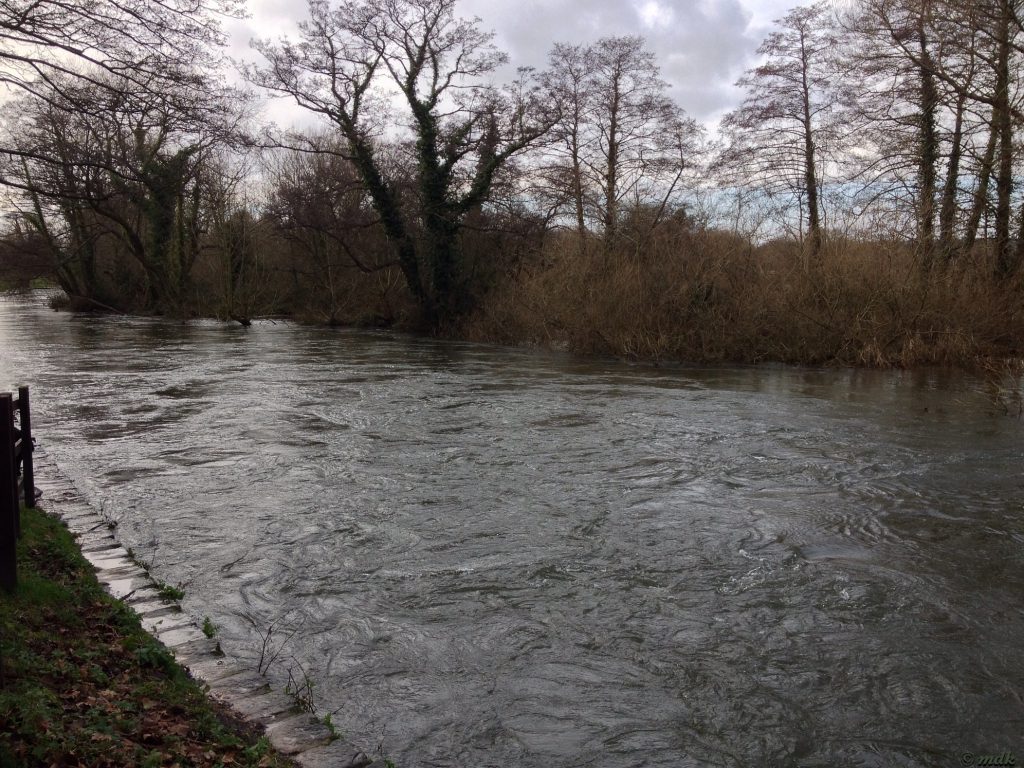 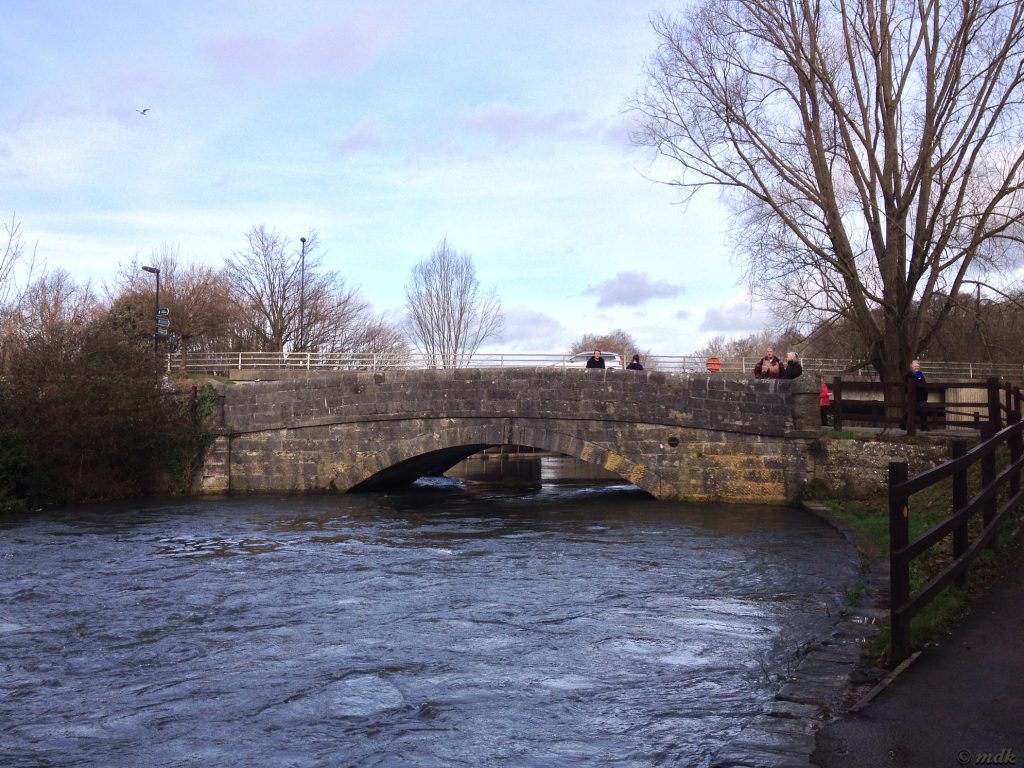 So I splashed through the Itchen, glad of my boots, keeping as far from the edge as possible. This walking the weight off malarkey would be a sight easier if Mother Nature played nicely and kept the river off the land. On the other bank the river had escaped into the woods and the little weir further down was hidden under the water. 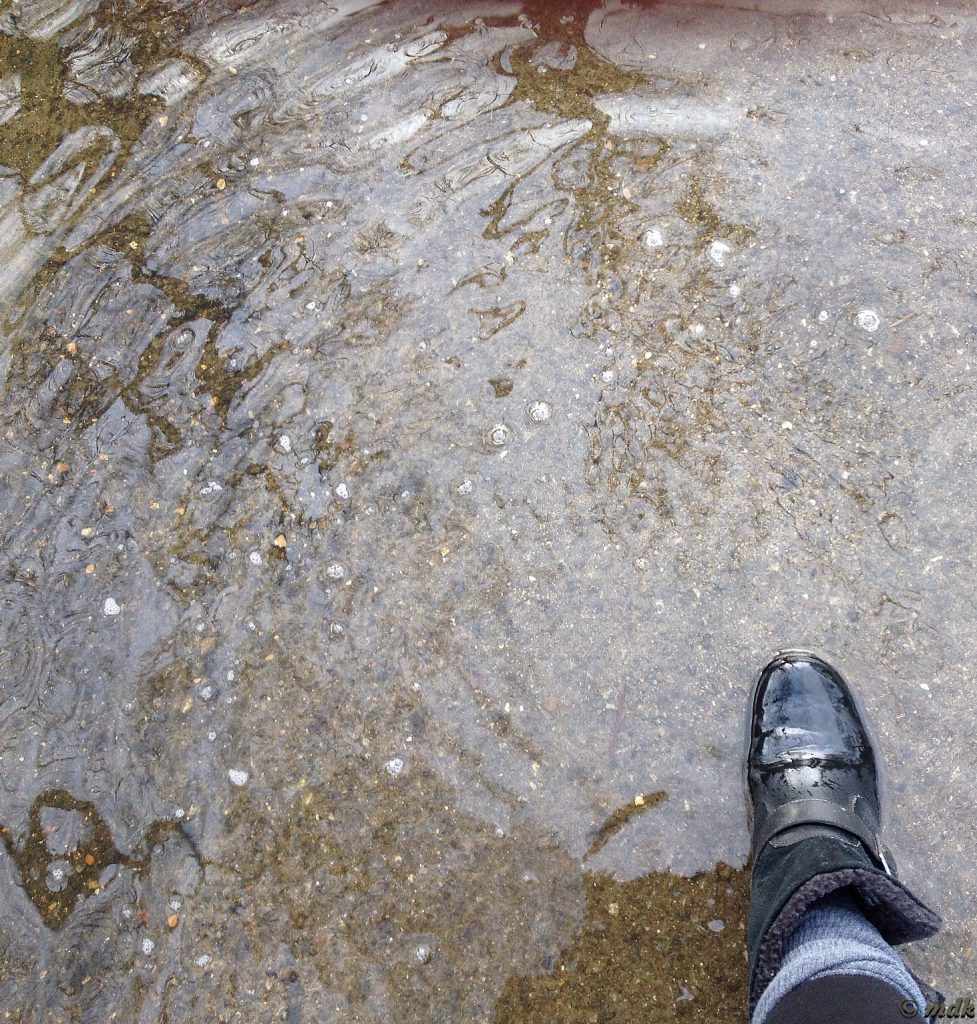 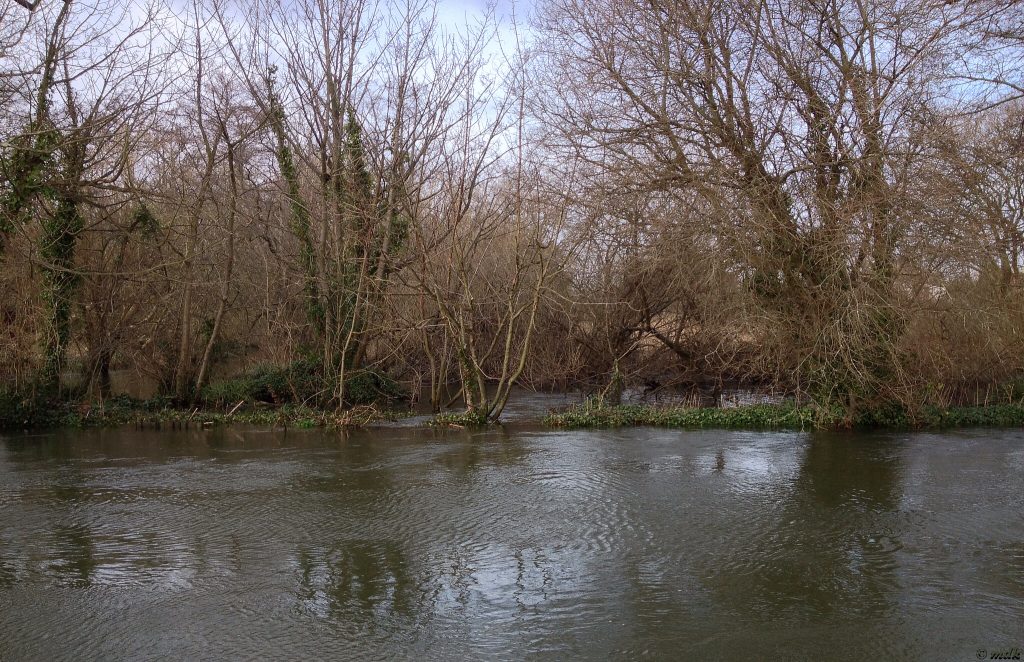 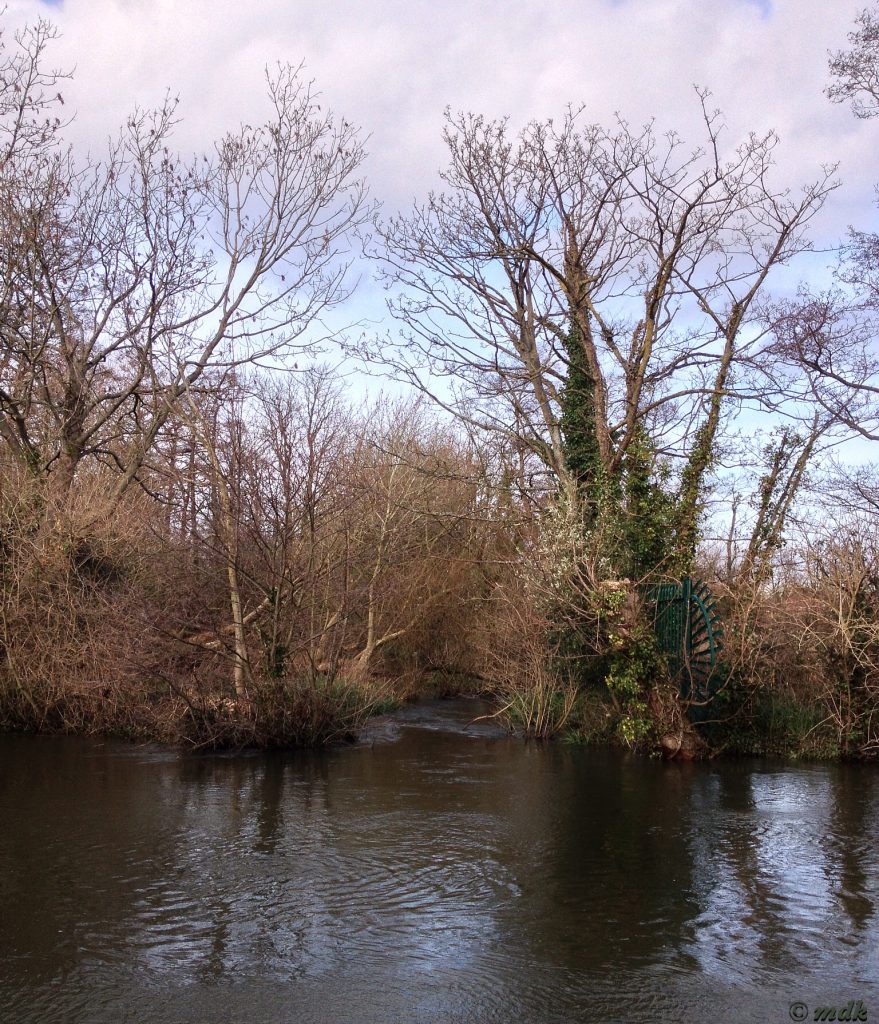 On towards Woodmill the bank on my side was at least dry but the swans on the river and the gulls perched on the ivy covered dead tree looked a little perturbed by all the extra water. A family were throwing bread to the ducks and the seagulls were snatching it before it even hit the water. As I passed the young lad shouted, “we’re over here ducks. Don’t let the seagulls eat all your bread.” The ducks stayed on the opposite bank obviously aware of the futility of trying to outwit the gulls. Perhaps the gulls thought I had bread too because a flock of followed me down river.

The sluice gates were closed at Woodmill again and there seemed to be more gulls sitting on the roof than ever. When I left the mill, instead of keeping to the path, I took one of the little half trails through the trees to have a look at the back of the mill. Most of these lead down the steep banks to the river and are used by fishermen. Yesterday the river was too high to go far or see the mill properly but this was fungus territory so I kept my eyes peeled. 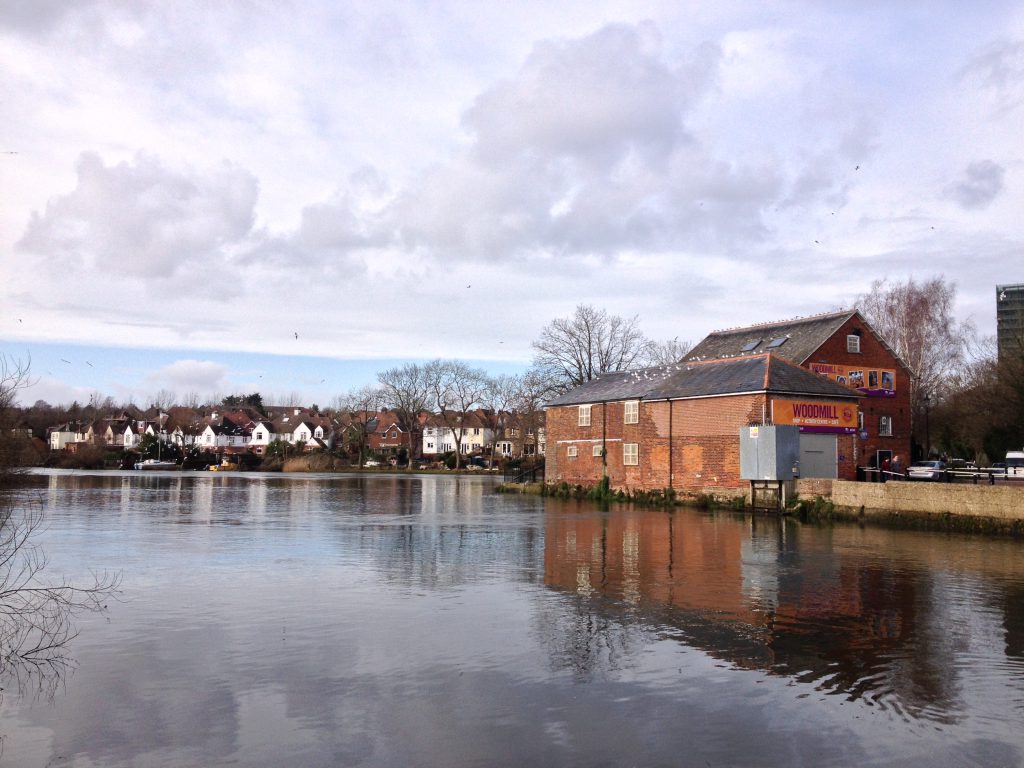 My vigilance was rewarded when I spotted an interesting looking hollow tree and saw my first ever jelly fungus growing on it. These little Globe like orange cups look like they could be made by fairies. I think they are Ascotremella faginea but I could be wrong. Whatever they were I was quite excited. Maybe this means I’m odd. 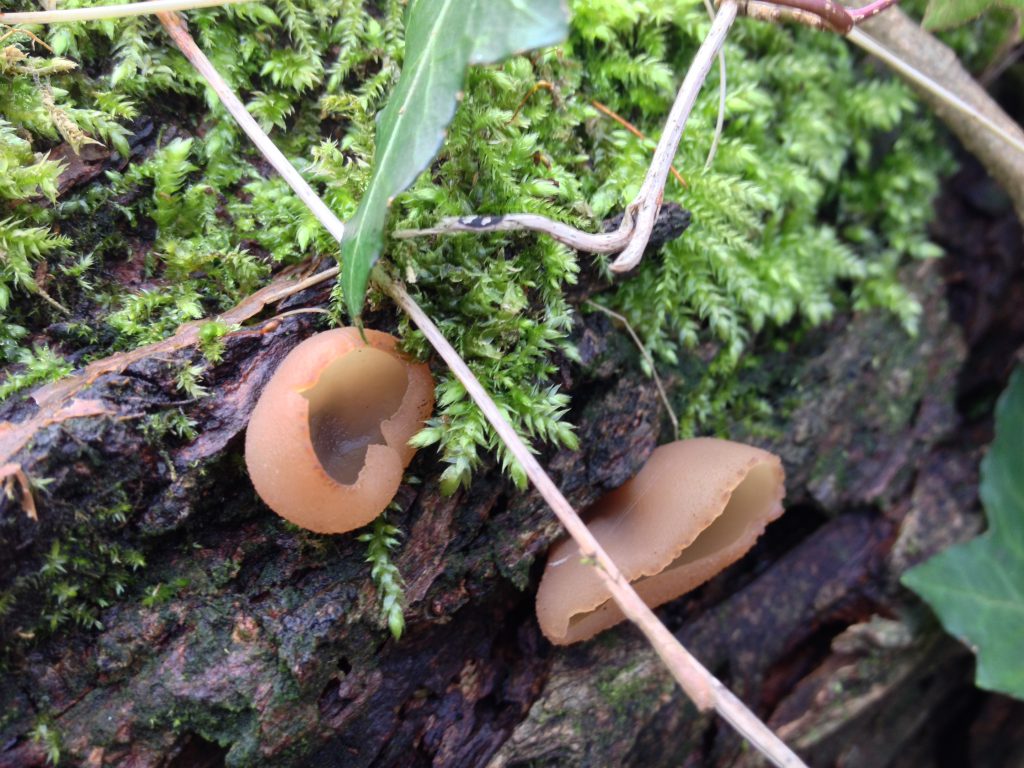 On the edge of the green behind the reed beds some old dead stumps were crawling with what I think we’re probably Trametes gibbosa or lumpy Bracket. They were certainly lumpy anyway and tinged green with algae. The view over the reed beds with sun glinting on the river was worth the extra walk regardless of finding fungi but it turned out to be a veritable fungi fest along there. Funny how I’ve never seen so many before. 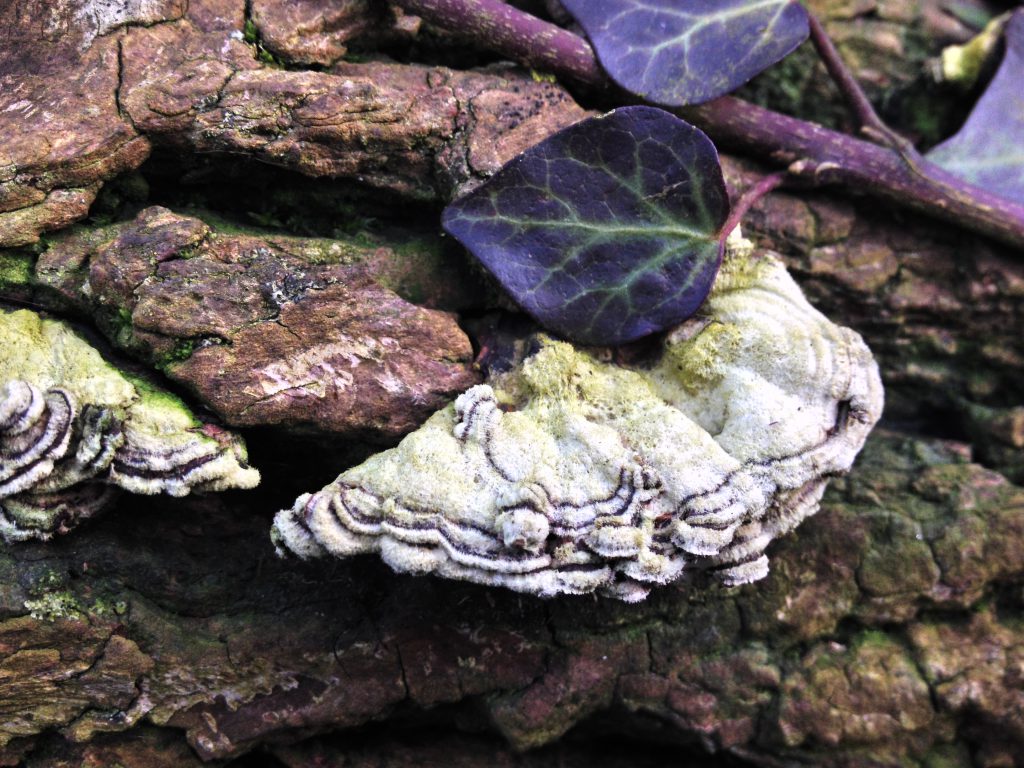 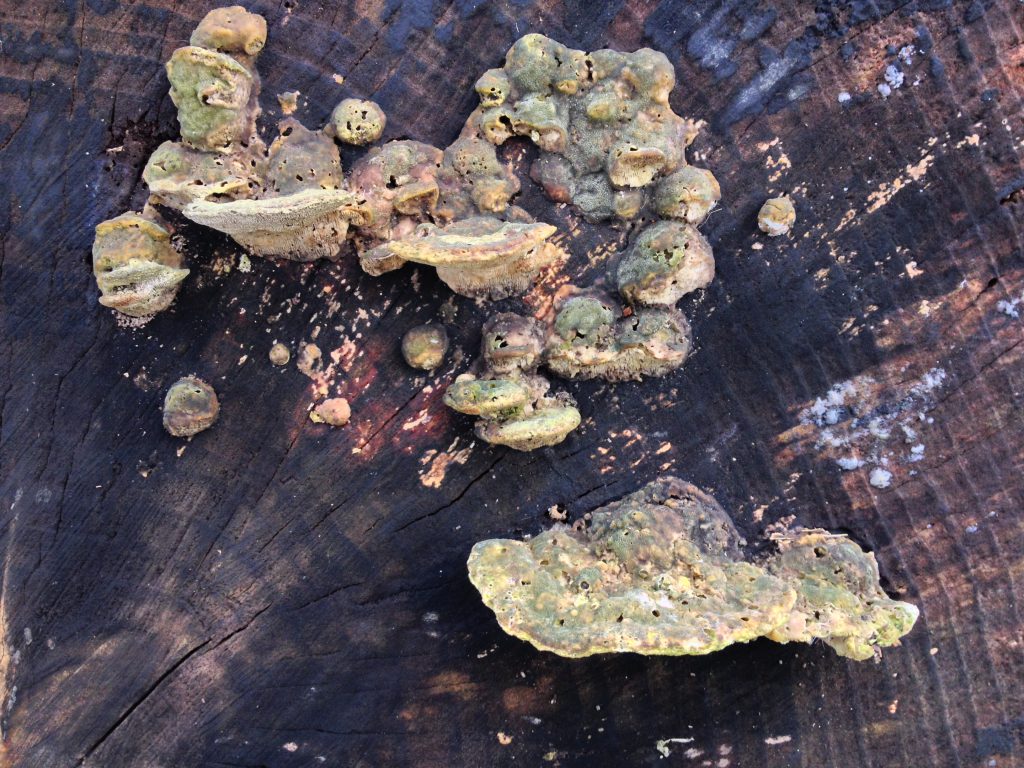 The next crop of fungi I saw had me clambering over dead trees for a closer look. The log was teaming but the fungi turned out to be so old and decayed I couldn’t be sure if they were more lumpy bracket or something else altogether. Whatever they were they were riddled with holes as if they had woodworm. 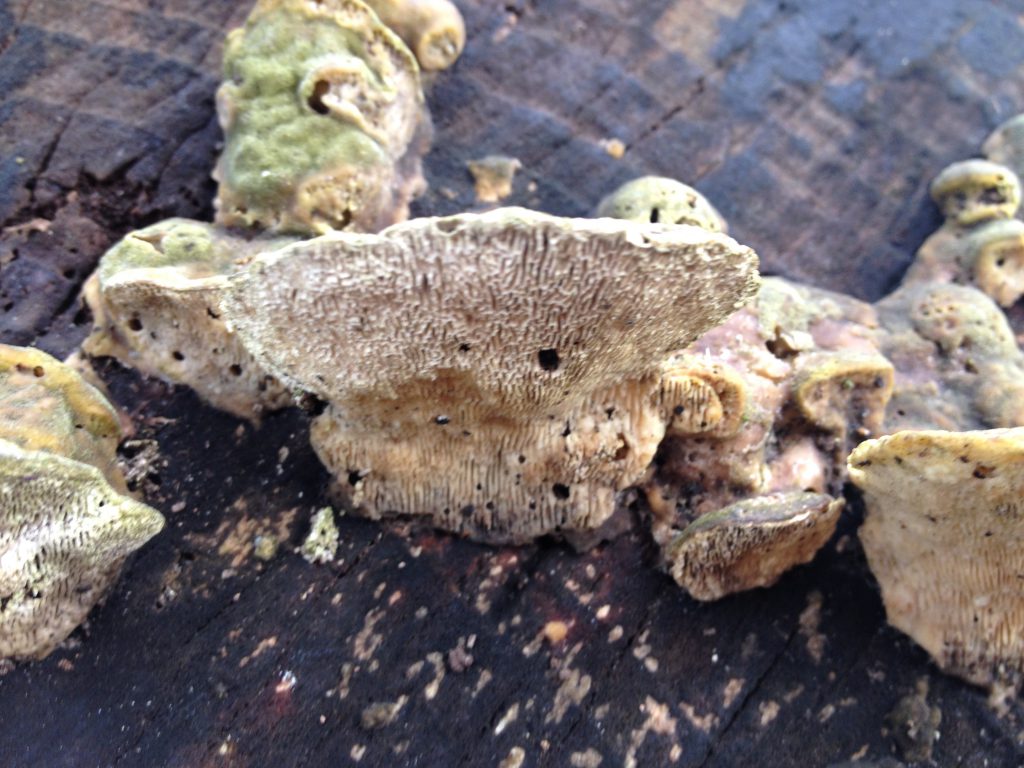 My clamber over the logs wasn’t completely in vain though. As I was about to climb back out I saw another jelly fungus. It must have been my lucky day. This one was alone, a single shell like growth spotted with white mould, or so it seemed. With great difficulty I managed to crouch low enough to get a picture of the underside. I almost fell over doing it but it was worth it. The light shining through lit it up like amber and also made my identification almost certain. I’m sure it was Auricularia auricula-judae or jelly Ear Fungus. If not it was a dead ringer. 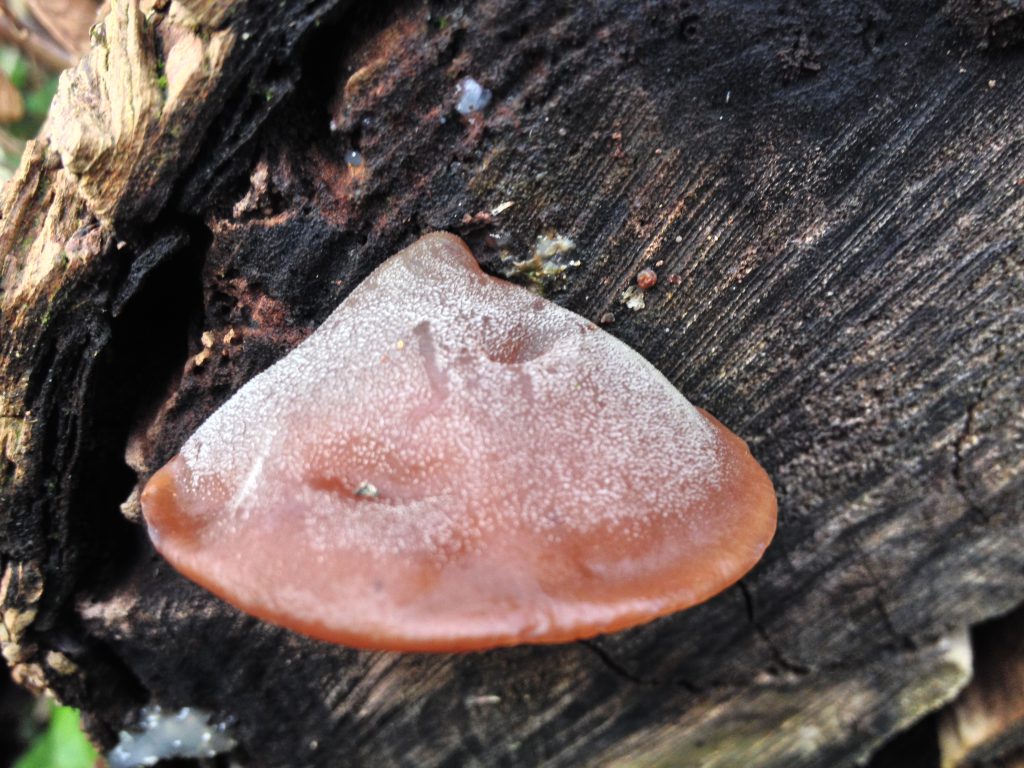 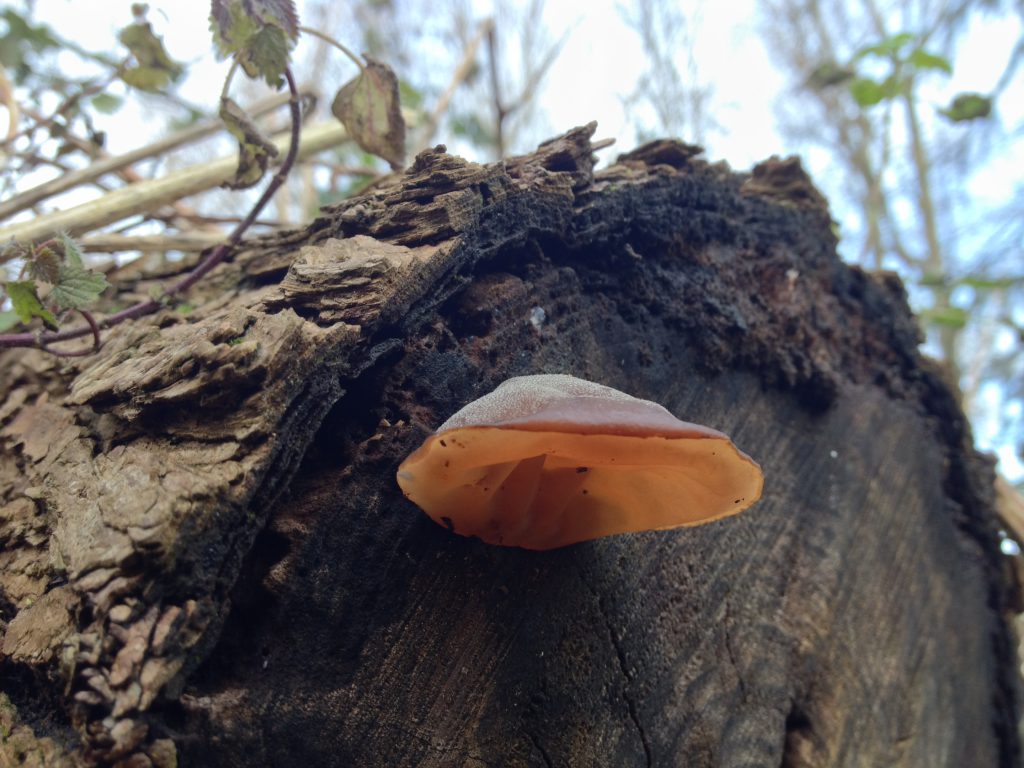 That was the last of the fungi discoveries. From then on it was along the open river bank, through the park. Past my favourite gnarled tree, a glance at some women rowing upstream, which looked like good exercise, then home. The idea had been to rack up six miles or so but my lack of planning foiled that. When I tracked the walk back at home it turned out to be less than five and a half. As far as walking the weight off goes I guess it’s better than nothing but there need to be some longer walks soon for sure. 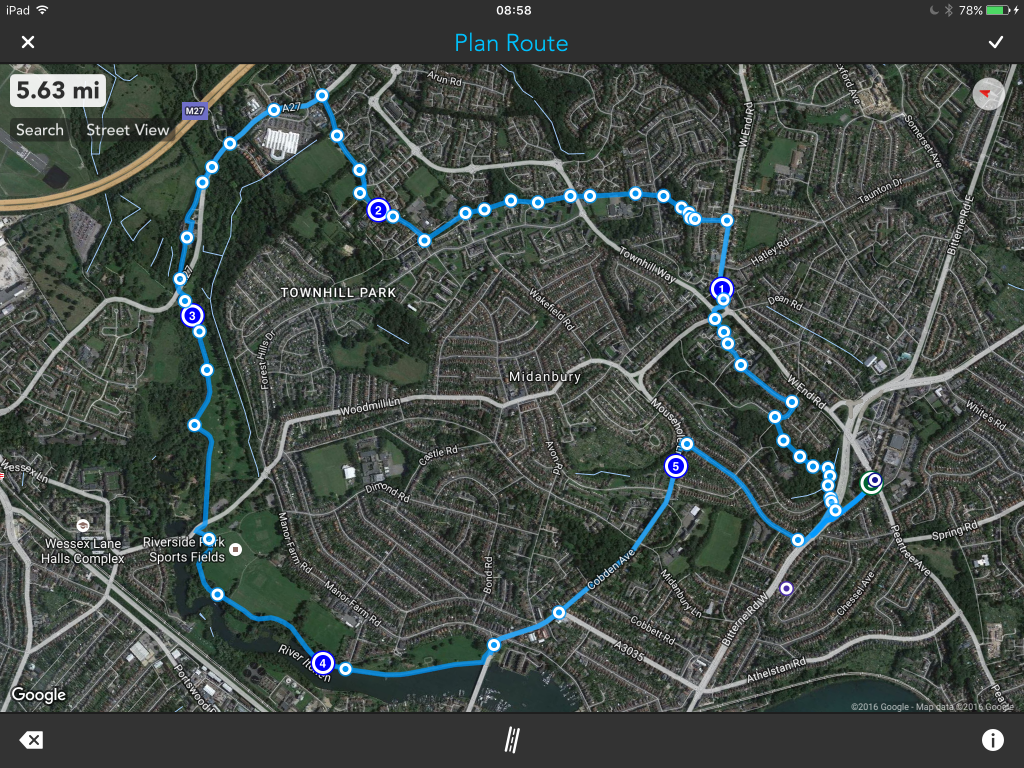