We’d walked four miles or so and now, right in front of us, was exactly what we’d been hoping. Or was it? With our hearts in our mouths we walked slowly forwards, hardly daring to hope. It all seemed a little bit too easy though. If this really was a boundary stone, right there in full view, why had no one found it before?

The closer we got the more sure I became that it wasn’t actually a boundary stone at all. Yes it was the right shape and size. It was even in the right place, more or less on the boundary of the city and it was where the mystery message said there was a stone. The trouble was, it looked as if it was connected to the kerbstone running behind the tree. When we got right up to it our hopes turned to disappointment. What we’d found was just a boundary stone shaped kerbstone. We stood and stared at it for some time, trying to will it to be something else. “This doesn’t mean there isn’t a stone somewhere in the woods here,” I told CJ, hoping to cheer him up. “We’re here now so we might as well explore.”
So we entered the wood. Until the cryptic message, I hadn’t even known there was a wood but, of course, I’d done a little research since then. Bassett Wood is actually connected to the open space of Daisy Dip and covers about forty four acres, big enough to make finding a lost boundary stone a little like finding a needle in a haystack. It began life as part of the grounds of Bassett Wood House, one of the villas that was built after Fleming’s Estate Acts in 1852. Later the estates containing the villas were divided up into housing estates and Bassett Wood House seems to have disappeared.

Straight away we could tell we were never going to be able to explore the whole of the woods in one day. Ahead of us, just inside the gate was a cycle path and, leading off to each side, narrower trails. We stood and dithered, not knowing which way to go or where any of the trails led. “If there is a stone,” I said after a little map looking and head scratching, “it’s most likely to be on this side of the wood, nearest to the city boundary. If we go right, it looks like we will come out on Redwood Way or Bassett Wood Drive, near the northernmost edge of the wood. I think we should try that first.”
CJ agreed, so we ignored the cycle path and started off along what turned out to be a steep and winding trail. To our right there were houses. We walked very slowly, peering into the undergrowth and between the trees, ever hopeful of spotting a stone. Luckily there was no one else about to see us and wonder what we were up to. 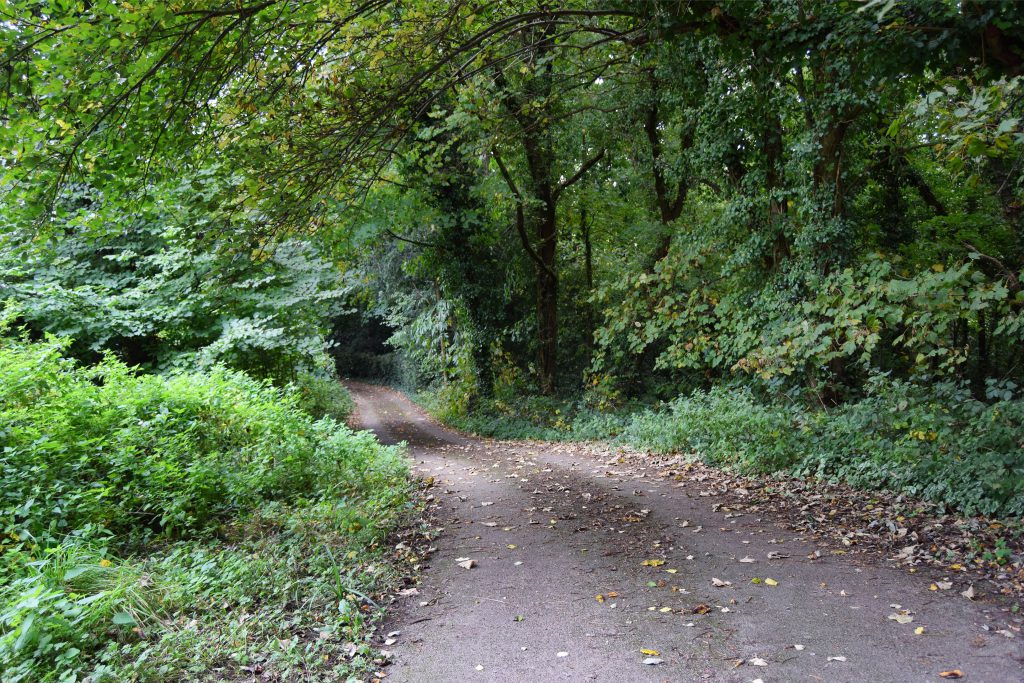 When we emerged onto the road we poked around for a bit in the greenery at the edge of the wood just in case. If there was a boundary stone we didn’t want to miss it for lack of thoroughness. We found a clump of fungi but no stone. Disappointed again but still slightly hopeful, we retraced our steps and walked back down the hill. 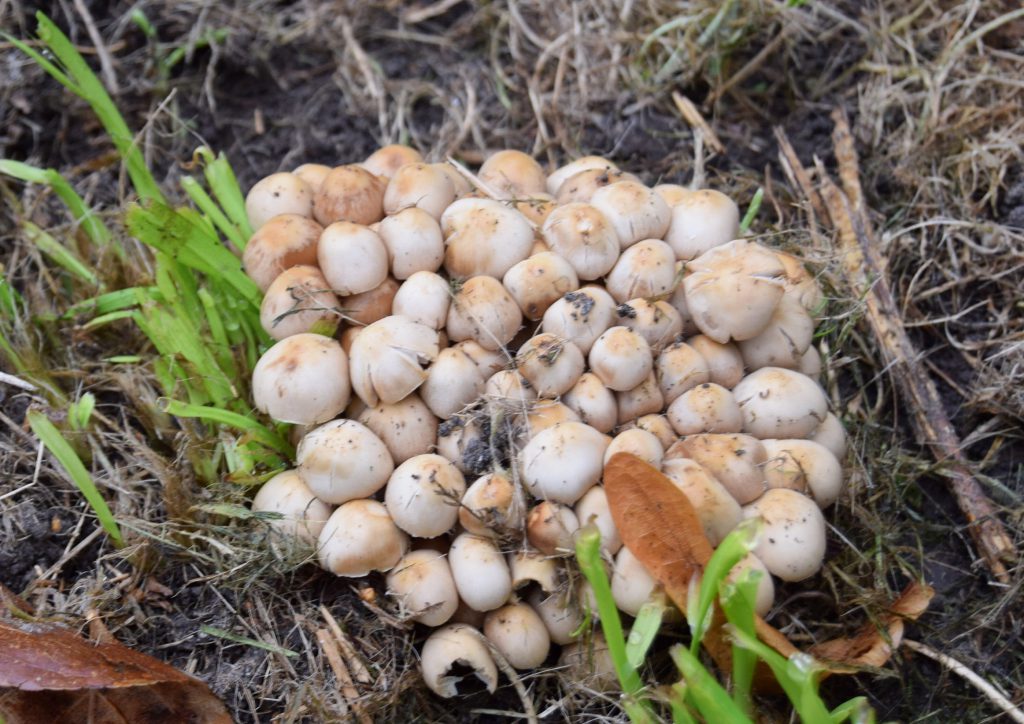 The trail to the left of the cycle path turned out to be a slightly embarrassing mistake. We wandered down it, still searching every clump of brambles and, after a very short while, discovered it was actually the drive to a house and a dead end. So it was back to the cycle path again, feeling slightly less hopeful than we had at the outset. The cycle path was short and led us out onto Spindlewood Close where there was nothing at all stone like. We walked up and down the road for a while, following edge of the wood even though I was sure we wouldn’t find what we were looking for on this side. Of course we found nothing so, yet again, we turned and retraced our steps.

On our journey along the cycle path we’d spotted a trail leading roughly south. On our way back we turned into it. Unlike the other trails we’d explored, this one wasn’t paved. Slowly we picked our way through fallen leaves, mud and tree roots, all the while scanning the woodland edges for a stone. Like many of the greenways and copses in the city, this wood is a remnant of the ancient woodland that once covered this part of Hampshire. A Roman road once crossed it and coins and flint tools dating as far back as Neolithic times have been found there. Sadly, we found nothing, not even a modern boundary stone. 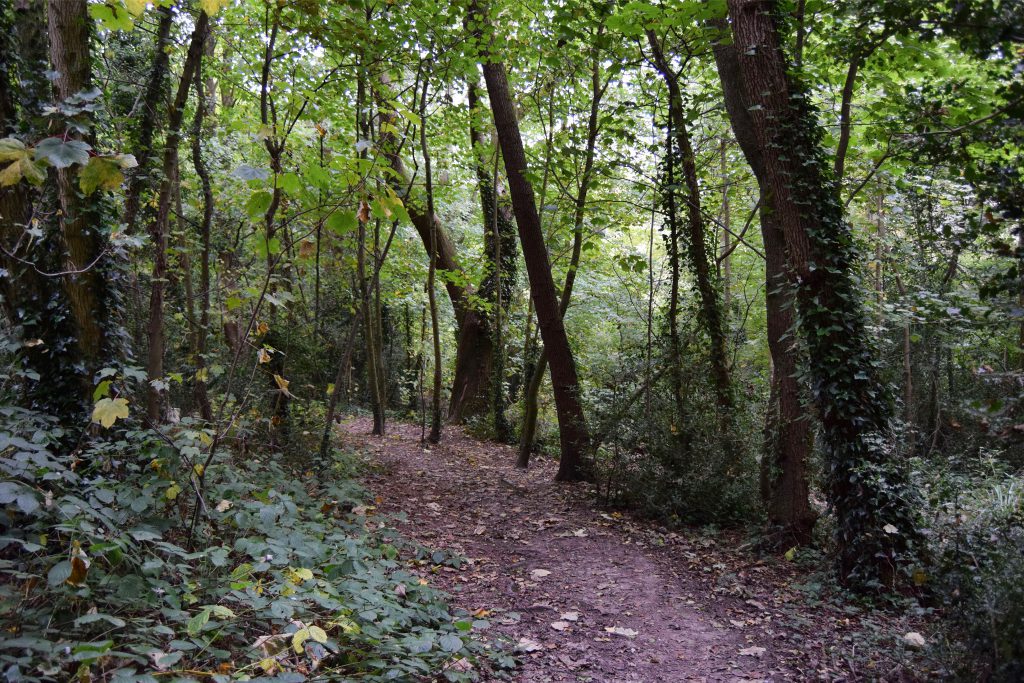 After a while we came to a bridge over a small stream. At this point it was almost dry but I guessed this must be the stream I’d read about when I was researching. Thought to be the Smerebrock, meaning brook of slimy mud, it was mentioned in a Saxon land grant and runs through the wood. From what we could see as we crossed, it certainly lived up to its name. 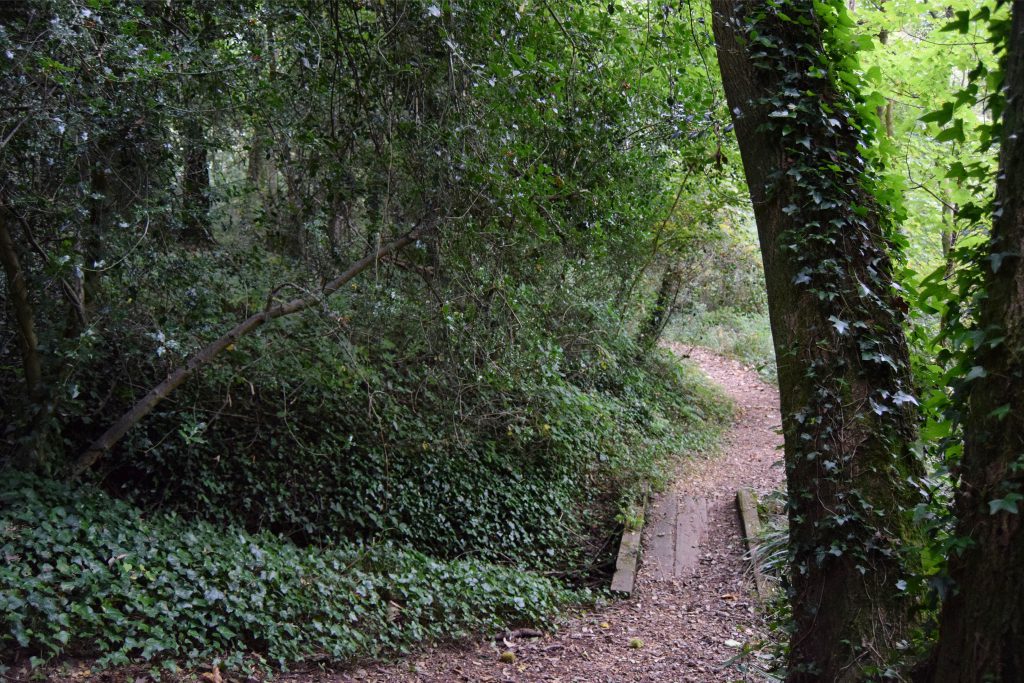 On we wandered. The trail meandered, sometimes up hill, sometimes down, through the quiet wood. Occasionally we could see garden fences to our left. A couple of times we came to side trails leading off to the right and then rejoining our trail a little further on. We steadfastly stuck to the left path, nearest Bassett Green Road and the city boundary. If there was a stone here it stood to reason this was where it would be. We met a dog walker who said good morning and, in a small clearing, We found a rope swing, a sign that children play in these woods, but, other than that, we were alone. When we left the clearing a lump of something that looked like a stone caught my eye. It obviously wasn’t one of the modern boundary stones, it was too tall and the wrong shape but it seemed too regular in shape to be just a boulder. For a moment or two I thought it might be an ancient boundary stone. The message that had set us on this journey hadn’t been clear at all. When I’d been trying to work it out I’d seen a stone on Google Maps at Stoneham that looked ancient, perhaps this one was too? 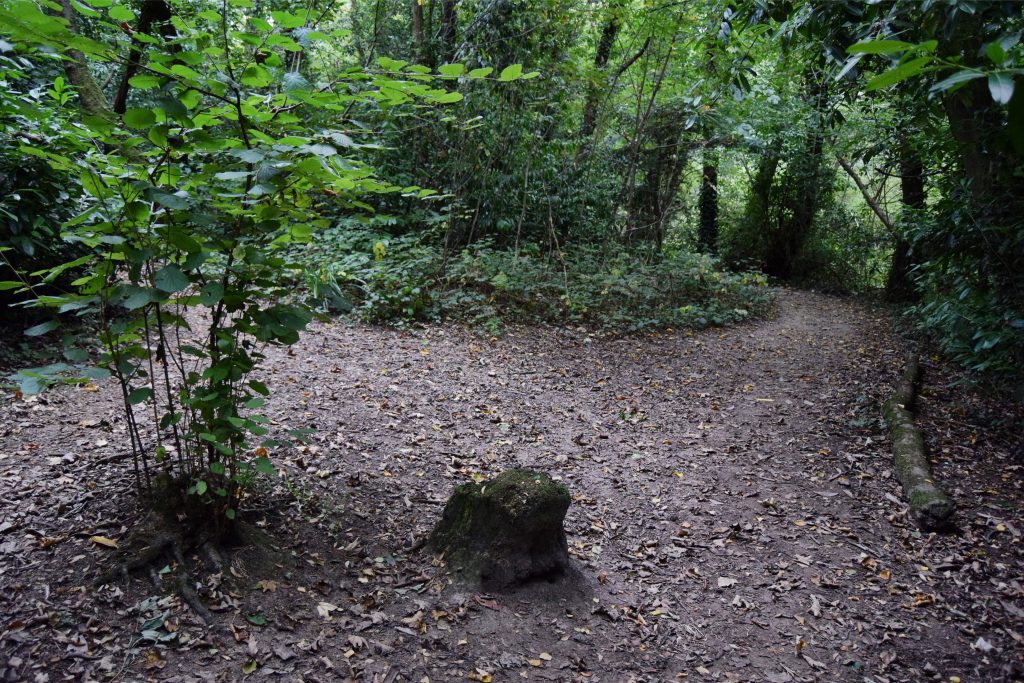 CJ and I hurried down the slope, feeling we might have found what we were looking for, or at least found something. Disappointment followed. The thing that looked so much like a stone, turned out to be a curiously angular and very moss covered tree stump. We walked on, our hopes fading fast. At the bottom of the dip the trail followed the muddy little stream. The ground here was boggy in places but we kept going, skirting the worst of it as best we could. At one point I saw what I thought was an upturned stone ahead but it was nothing more than the edge of a low bridge taking us across the stream. There was one more trail off to the left. By now I had all but lost hope of finding a stone, ancient or modern, but with CJ grumbling a little, I walked to the end anyway. It took us out onto another disappointgly empty road. Yet again we retraced our steps, still scanning the edges of the path just in case. All we found were some cyclamen amongst the leaf litter, pretty but not what we were looking for at all. After this the trail stopped heading south and turned to the east. Through the trees I could just make out an area of grass and it looked as if we were coming to the end of the woods. Before long we’d reached the road again, this time on the other side of the wood and I could see we were on the edge of Daisy Dip. In fact there was a path running parallel to the one we’d left and a little higher, going across the dip. Needless to say, there was no stone anywhere to be found. 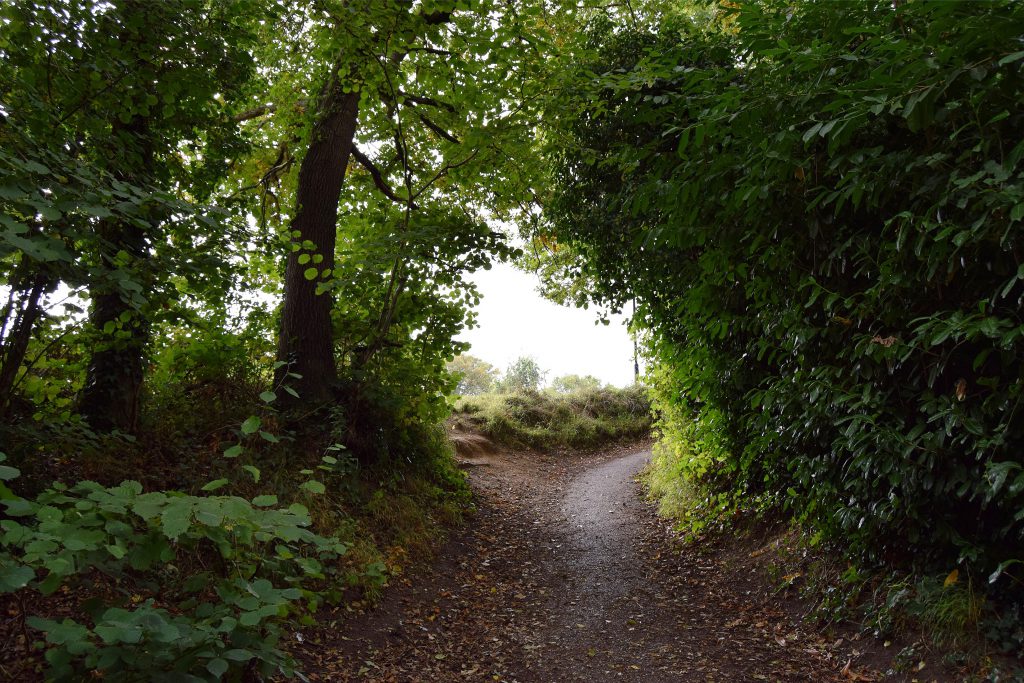 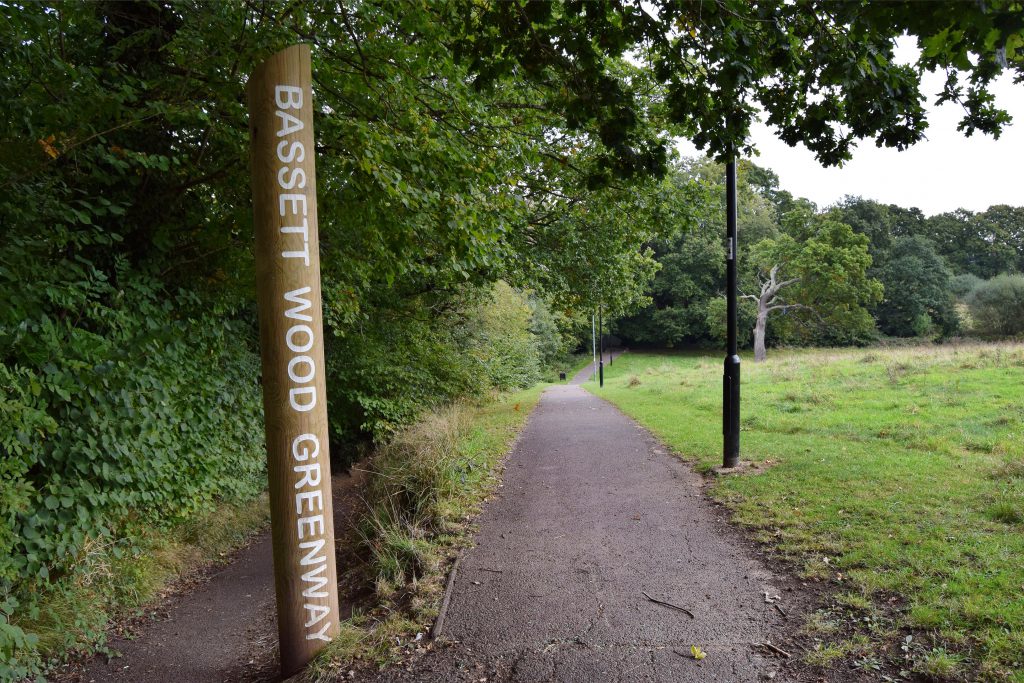 Ahead was a cutway between the houses leading us onto Bluebell Road. Our quest had come to an end, at least for today and it was time for a parting of the ways too. CJ was heading into town to meet a friend. 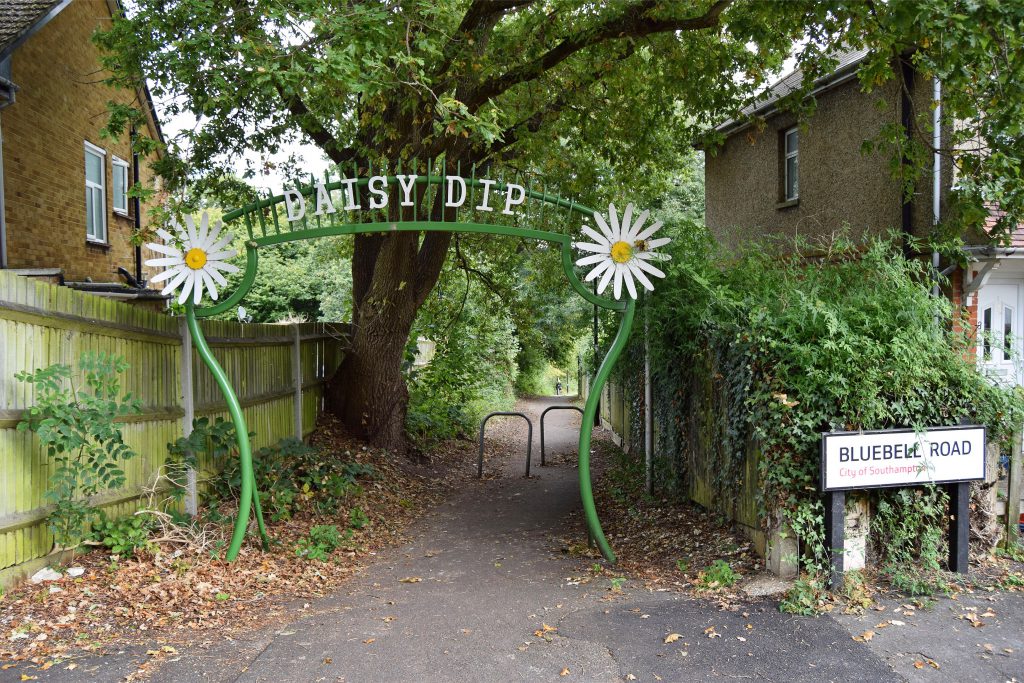 Slowly I made my way back towards the river. When I reached the reedbeds and the bench under my favourite oak tree I sat for a while looking over the water while leaves gently fell around me. It had been a strange morning. We’d started out full of hope, thinking we might be about to discover a boundary stone no one knew about. We’d had a pleasant walk, seen a church that thinks it’s a castle and found a new piece of ancient woodland to explore. In the end, though, we’d counted our chickens before they were hatched. The stone we thought we’d found had turned out to be nothing more than an odd shaped kerbstone and the wood, though peaceful and pleasant to walk through, didn’t contain the treasure we’d hoped for. The search for the 1988 boundary stones has led us a merry dance. Even so, it’s taken us to some interesting places we might never have seen and given us some joyful moments of discovery along with some crushing disappointments. We have found ten stones. Maybe there were only ever ten? The lure of solving the mystery of the stones is strong and it would be lovely to tie everything up in a neat little bow with all the answers found. This quest though, has thrown up more questions than it’s answered time and again. Maybe there are no answers left to be found? 12 thoughts on “The mystery of Bassett Woods”