Several months ago I saw a photograph of Francis Godolphin Osbourne Stuart’s grave on a Facebook local history page and discovered it was hidden somewhere in the Old Cemetery. This little bit of knowledge set off a search that would take up my Saturday mornings for the whole of the summer. The Old Cemetery is huge and maze like. This summer it was also very overgrown. With no idea of where the grave was it was never going to be easy but a walk in the Old Cemetery is never a hardship.

While many people have never even heard of Francis Godolphin Osbourne Stuart, almost everyone in Southampton has, at one time or another, admired his work. Stuart was a photographer, back in a time when most people didn’t own a camera, and his beautiful hand coloured postcards are a lasting record of the history of Southampton. Stuart was born in 1843 in Braemar, Aberdeenshire, the son of a gamekeeper on the Duke of Fife’s estate. In his twenties he worked for Andrew Adams, who owned the A Adams Photographic Rooms in Broad Street Aberdeen. It was here he learnt his trade. By 1872 Stuart had set up his own business in London as a Portrait and Landscape Photographer. Shortly after this move he married Agnes Reid, an Aberdeen lass.

Although the business in London thrived, in 1881, Stuart and his wife moved to Southampton and set up a studio in Bedford Place. No one knows what prompted the move but it seems to me it was London’s loss and Southampton’s gain. Over the years Stuart and later his son in law, Charles Dowson, created over two thousand five hundred postcards, many of which were of Southampton. Often my walks lead me to places Stuart went and trying to recreate his scenes is an interesting exercise showing just how much has changed over the years. 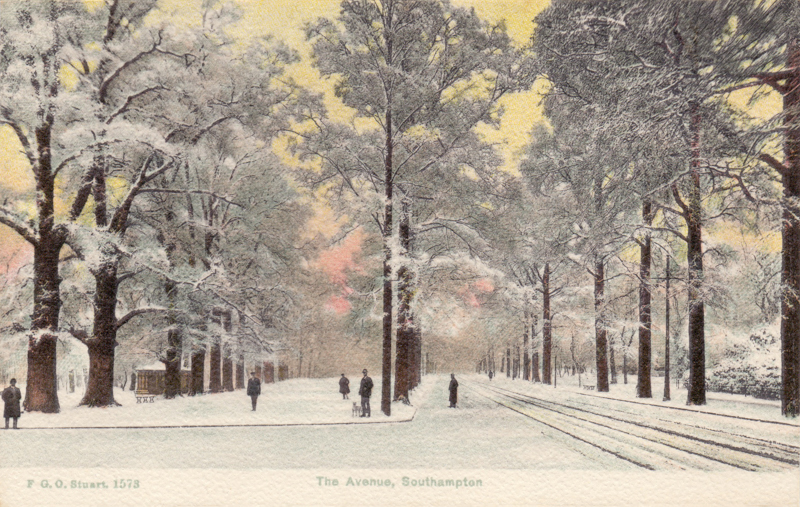 Once I knew Stuart was buried in the Old Cemetery, finding his grave became something of a quest. Every Saturday morning, as soon as the parkrunners began to line up for the start of their run, I’d march across the Common to the Cemetery and search. It quickly became clear random searching wasn’t going to work so, after a few fruitless weeks, I started to become more systematic. Each week I’d try a different area and each week I’d walk back to the parkrun finish disappointed. A few times, when Commando wanted a longer run, we’d leave extra early and he’d drop me off at the cemetery gates. Often other interesting graves distracted me and my walks were never dull.

The fire in the Cemetery derailed my search a little. When I learned about it my first thought was that Stuart’s grave might have been destroyed or badly damaged and I’d never find it. As it happened, the fire was in an area I’d already searched very thoroughly so, although it was a terrible shame, it wasn’t quite the disaster I’d imagined. This morning, as I walked through the cemetery on my way to the area I’d marked out to search, I stopped for a moment to revisit the damage. 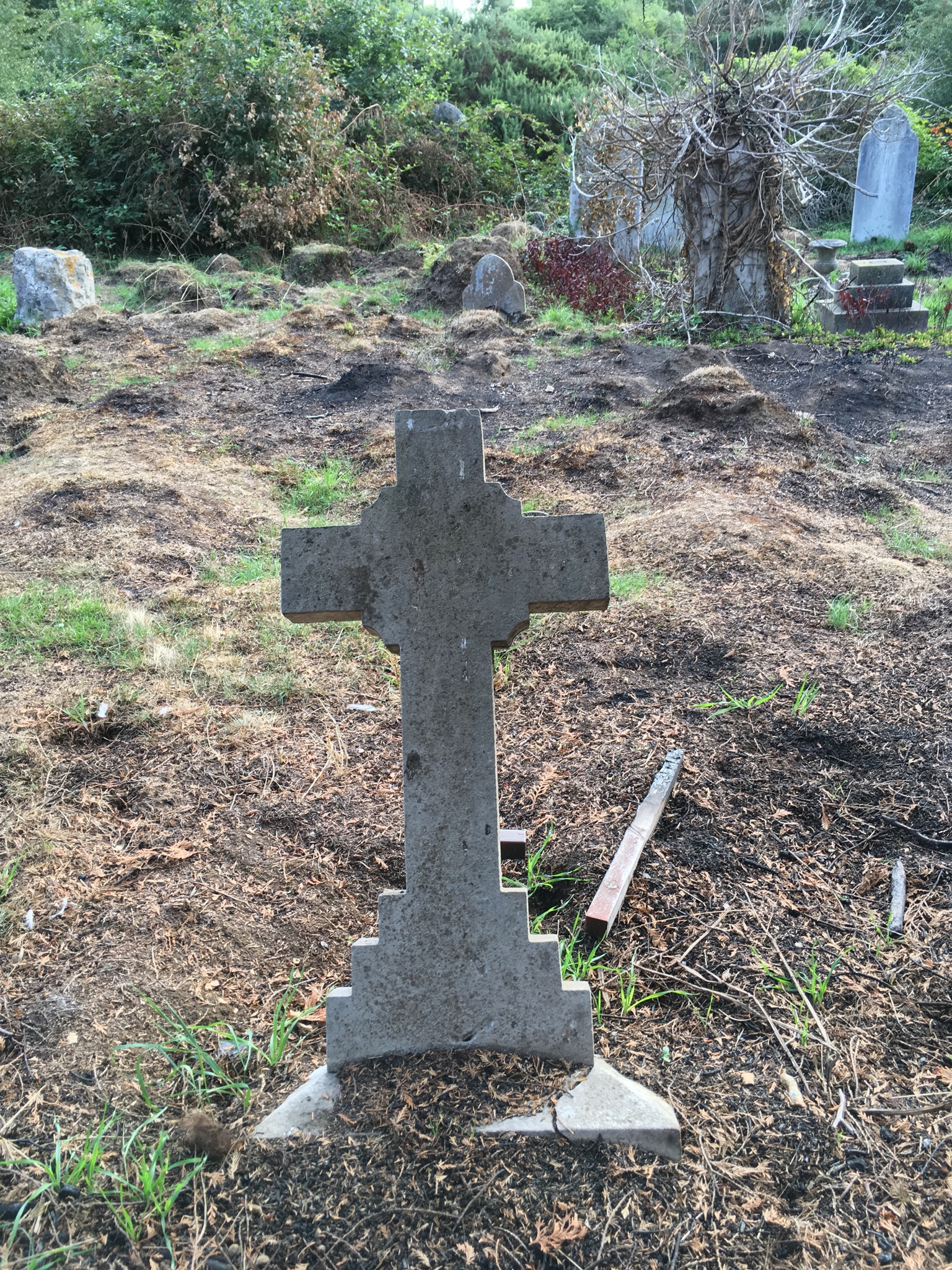 In a little over a month Mother Nature has already begun to reclaim the scorched earth.  There is a fuzz of new green grass growing over the mounds of burnt soil and the weeds and brambles are slowly recolonising the grave stones. In a few more weeks it will probably be hard to tell where the fire was. 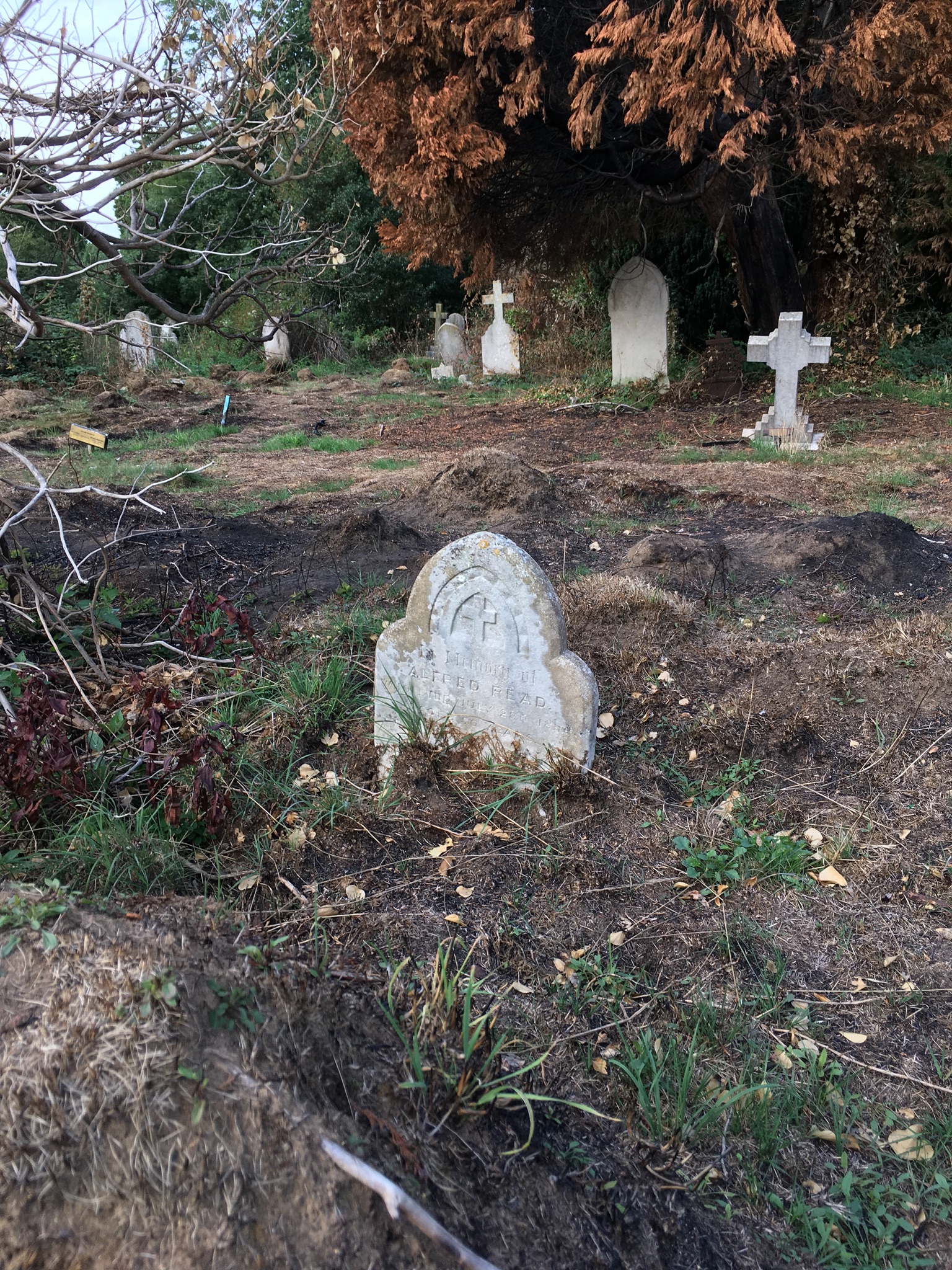 Once I’d strayed from the path I very nearly got so caught up in looking at the damaged graves that I forgot my mission. This is a place where it’s very easy to get distracted, even lost. A distant murmur from the parkrun PA system reminded me I was supposed to be searching in the oldest part of the cemetery this morning and, as the runners were just about to set off, I really should be getting on too. So, without further delay, I marched along the path to the main gates. Through the gates is the oldest part of the cemetery. The graves here are grander and soon enough I found myself getting distracted again by a large stone slab supported at one end by two stone spheres. This was the grave of John Reid Becher of the Royal Bengal Engineers. It was such an unusual monument I knew I had to find out more. Later, at home, I uncovered what I could. John was born in 1819, the son of Colonel John Becher of the Bengal Cavalry. He and all his eight brothers followed in their father’s footsteps and became army officers.

John was, by all accounts, a handsome man with red gold hair and striking blue eyes. He was involved in the first Sikh War in 1846 and shot through the cheek. Later he became Depty Commissioner of Hazara during the Second SikhWar, and the Indian Mutiny of 1857. Although he was loved and respected, he was something of a fish out of water and moved from one position to the next, including the Commissioner of the Derajat, and of Peshawar. In his later career he was made a full General but his health failed from long hours of work and he retired and returned to England in 1866. He never married and died in Southampton in 1884. 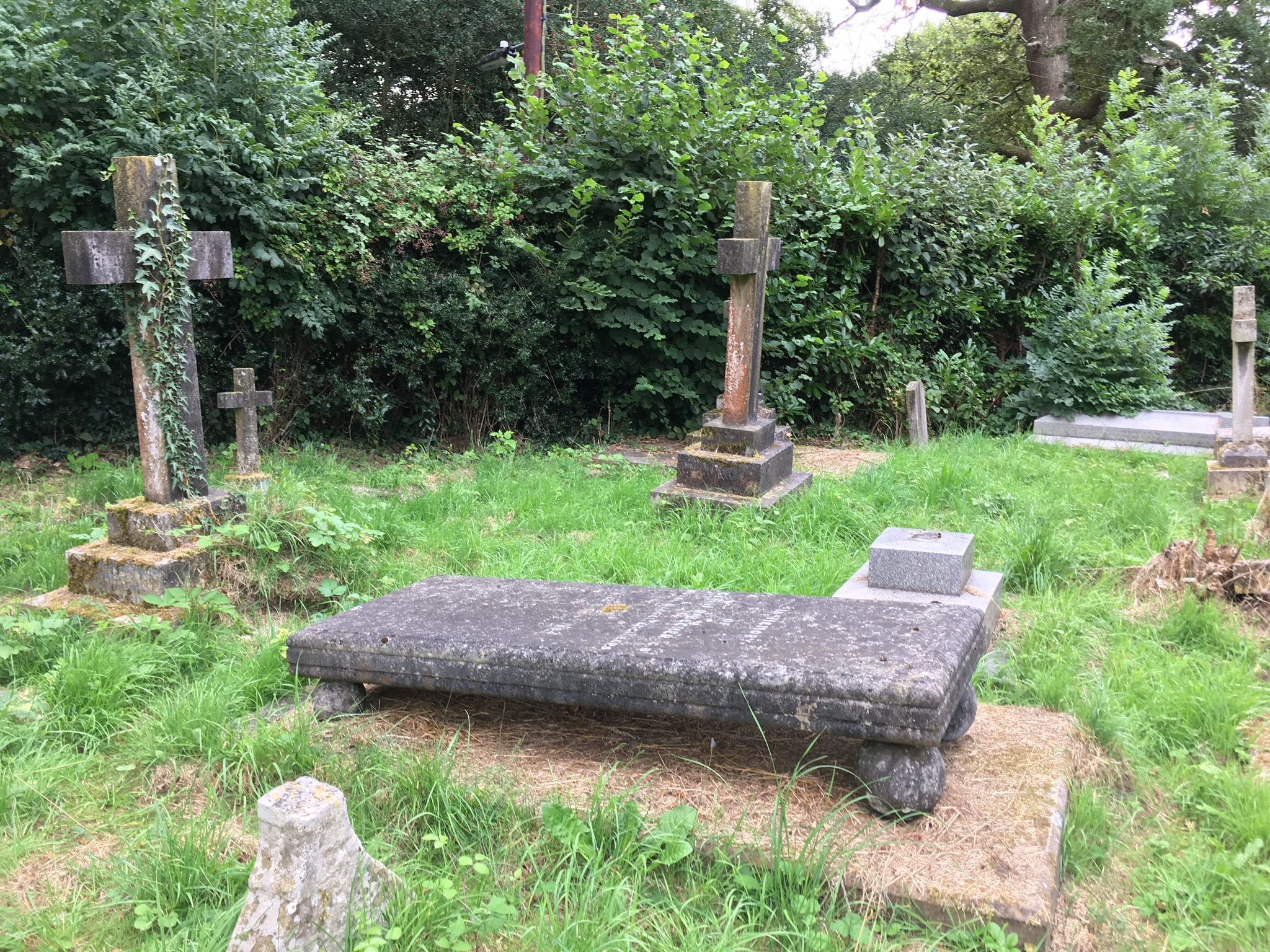 My plan today was to explore the graves to the left of the chapel, time permitting, going as far as the Hill Lane boundary. This took me past the only walk in monument in the Old Cemetery, built by  Araline Gamlen Nicholas for her son, Richard Nicholas, in 1901. It’s truly a thing of beauty and I couldn’t pass by without taking at least one photograph. From the photograph of Stuart’s monument I knew it was a large pink marble affair with a draped urn on top. In theory this should have made it easy enough to spot but all the graves here seemed to be large and the whole area was very overgrown. Originally I’d felt quite sure it would be in this part of the cemetery but several previous visits had been fruitless and I was beginning to wonder if the information I’d been given was wrong.

Leaving the Nicholas memorial, I began to walk towards the boundary hedge, looking around me as I did. On two past walks I’d searched the area in front of the chapel but today something made me look that way anyway. That was when I saw something that looked like it might be the grave I’d been searching for. It was quite distant from the path and surrounded by overgrown vegetation so I couldn’t be sure but I set off along the path to my right anyway, even though it wasn’t on my plan for the morning. Of course, as soon as I began walking I lost sight of the monument and, for a little while, I thought I might have imagined it. The vegetation was so out of control after the long, hot summer, it was hard to even tell there were graves hidden amongst it. A few more steps though and I saw it again. Now I was sure it was Stuart’s grave but I wasn’t sure how on Earth I was going to get closer to it. There was a brief and abortive attempt to push my way through the brambles but I soon had to concede defeat. With no path of any kind it was an impossible task. Feeling frustrated, I carried on along the path, getting further and further from the grave, and turned onto the path that leads up to the chapel. All the while I was looking for some way to get into the tangle of brambles and weeds and reach the grave.

Finally, I saw something that might just be a way in. It involved clambering over graves, which is something I always feel bad about for some reason. Today there was no way around it and I still had to contend with the brambles clutching at me and a few ratherlarge and unexpected holes under the long grass. A couple of times I almost fell and was only saved by clinging to gravestones. It was not the most elegant walk I’ve ever taken but, eventually, I was in front of the grave. The brambles around it were so thick I could barely get a shot of the inscription but I did my best. Francis Godolphin Osbourne Stuart lived in the golden age of postcard photography and his legacy of beautiful postcards are a document of the town in the late 1800’s and early 1900’s. There was a certain irony in my inability to take a decent picture of his grave but at least I’d found it. Now all I had to do was somehow retrace my steps and get back to the path. As I struggled back across the graves and brambles I wondered what Stuart would have made of my mission or my slight obsession with his work? Of course I’m not alone in this. Stuart’s photographic business soon outgrew his premises in Bedford Place and he moved to a new studio and home at Cromwell Road, living at number 57 and using number 61 as his studio. Later he even took over the house between those two and this became his store and the address of the National Photographic Company. He was also the official team photographer for Southampton Football Club in its early days and, during World War I became the official port photographer, photographing Southampton docks and many of the ships. 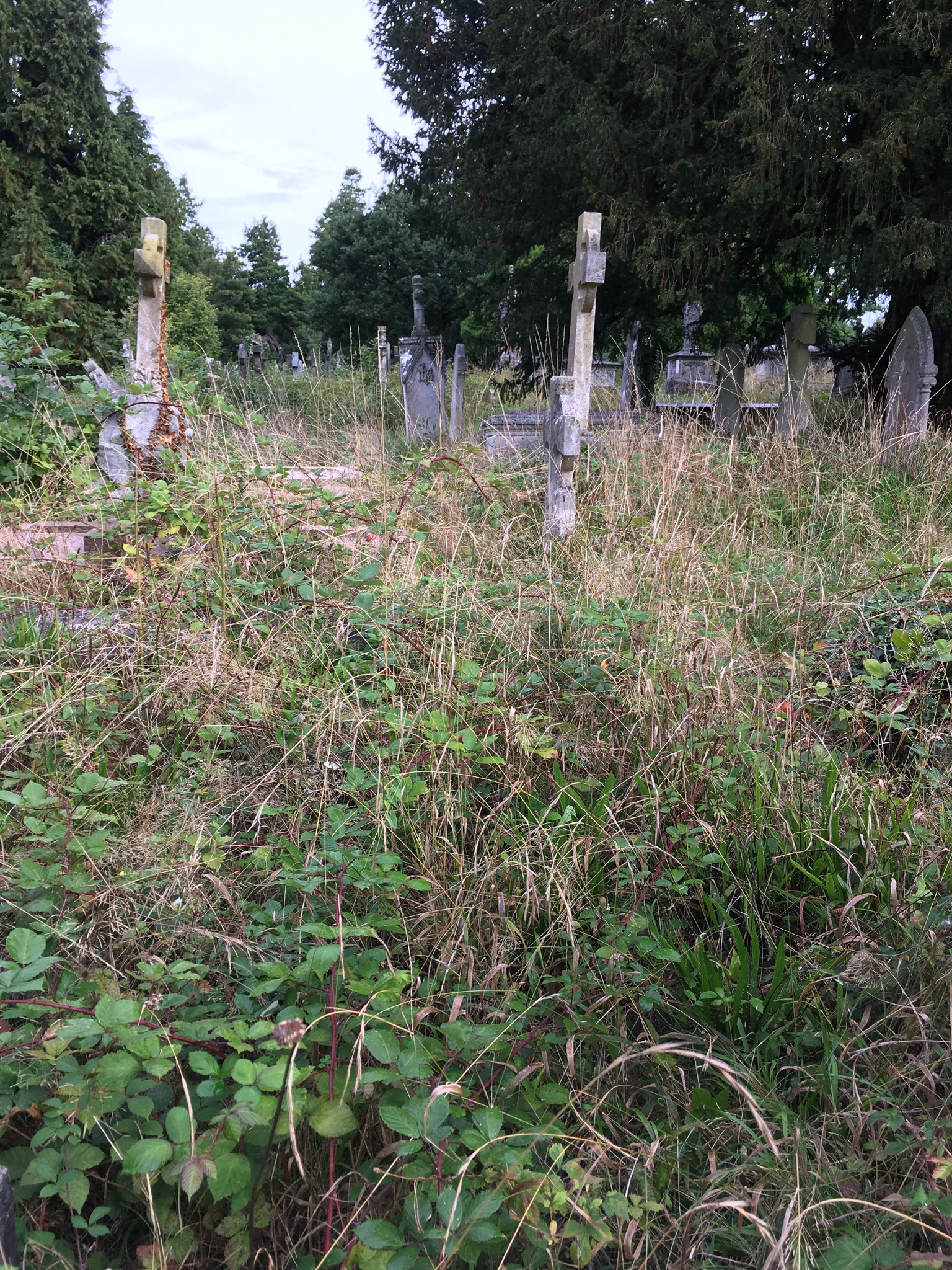 Stuart died at his Southampton home in 1923. His son in law Charles Dowson took over the family business and continued making postcards until the 1930’s. Sadly he and Stuart’s daughter, Flora, had no children so there are no surviving relatives to tend his grave. Perhaps I will come back in the winter when the brambles have died back and bring some flowers? 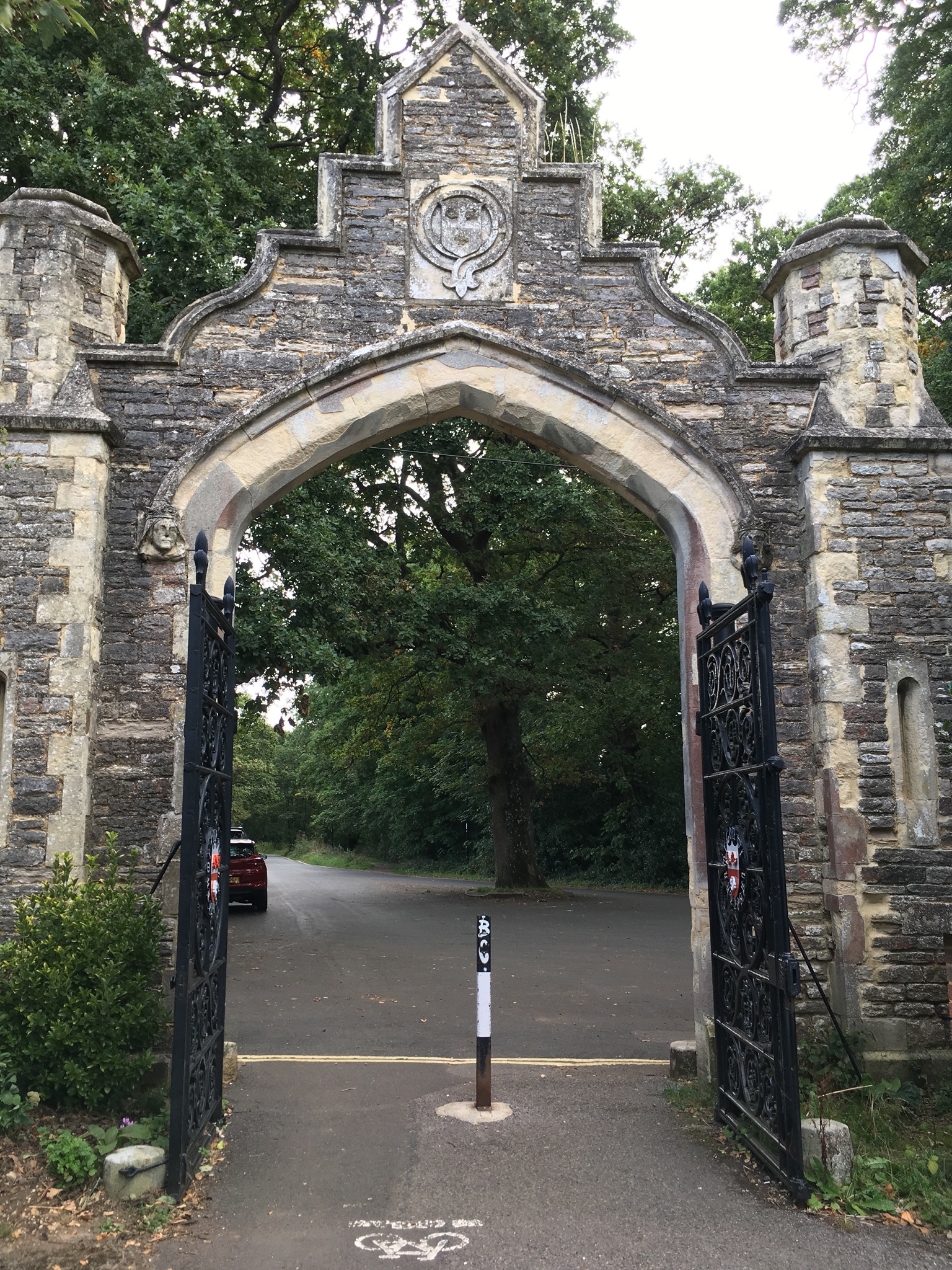 10 thoughts on “Gravehunting, a photographer’s story”