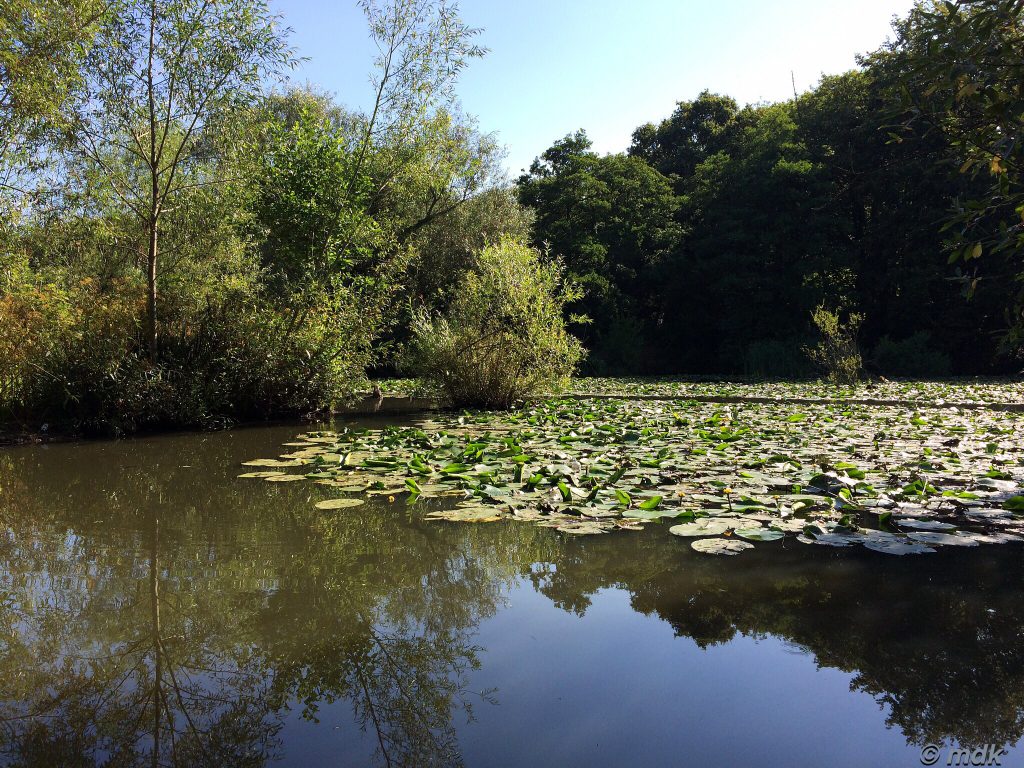 With Mediterranean temperatures and high humidity in July 2014 I knew I’d have to come up with a good walking plan if I was going to get some miles in. Goodness knows I needed to as the hundred miles a month was looking more than a little short with just over a week to go. For once there was some forward planning. Ok so this only constituted a water bottle in the freezer (with the lid off otherwise they burst when the water expands) but still, it was a step in the right direction.

As far as routes went I was undecided today. There was a half plan to get the bus to Totton and check out the Eling Tide Mill but, mile wise, this didn’t look good. Shade seemed to be the main requirement, along with miles, so I pored over the satellite map looking for green areas. Finally one jumped out at me, Mayfield Park. I could revisit the Butterfly Walk I took with Gail last August.

So it was up the Little Hill and down Spring Road as quickly as I could, taking full advantage of any bits of shade I could find. At Millers Pond I couldn’t resist a quick stop to look at the water lilies. There were dragonflies but, of course, I couldn’t get close enough for a photo. It was going to be the story of the day more or less. There were ducks posing on the bank though. 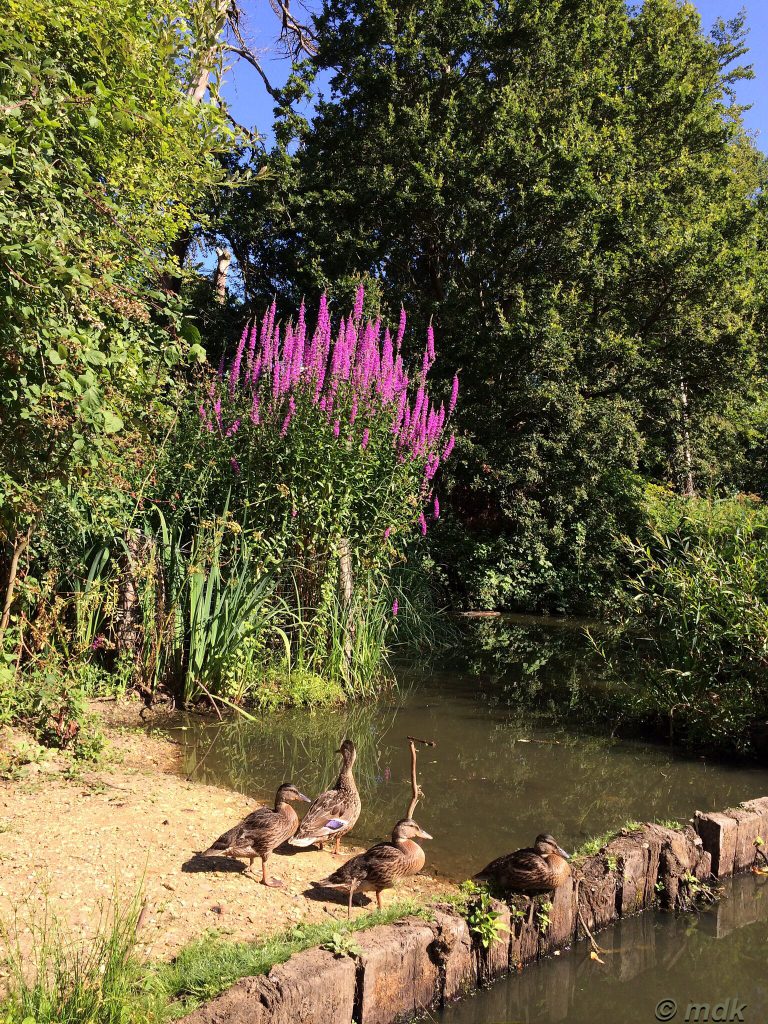 Just under the railway bridge was the entrance to the woods. There’s a strange triangular sculpture outside the gate. I don’t remember seeing it before but, as I was walking with a friend, I may have missed it. The lovely carved sign was there before though but I stopped to take a photo anyway. It shows all the things you might spot along the trail, spiders, butterflies, trees and fruit. There seems to be a deer on it too but I’d be very surprised to see one, still, what do I know? Wondering if there really might be deer in the woods I set off along the path. 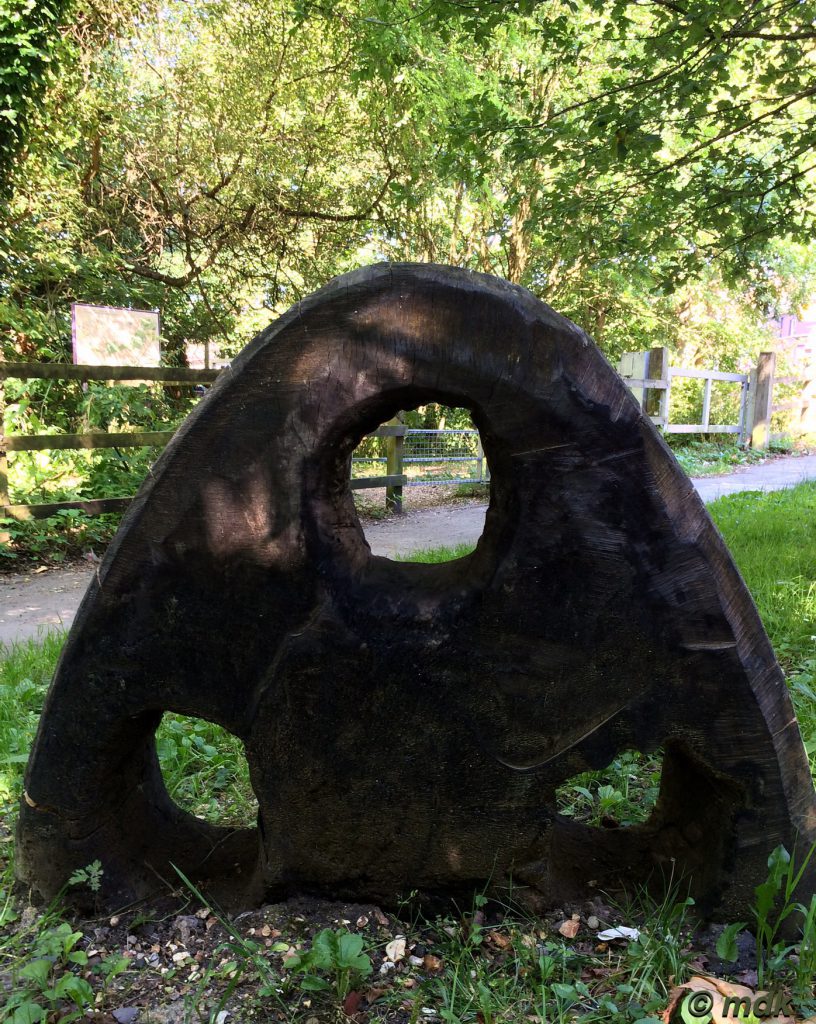 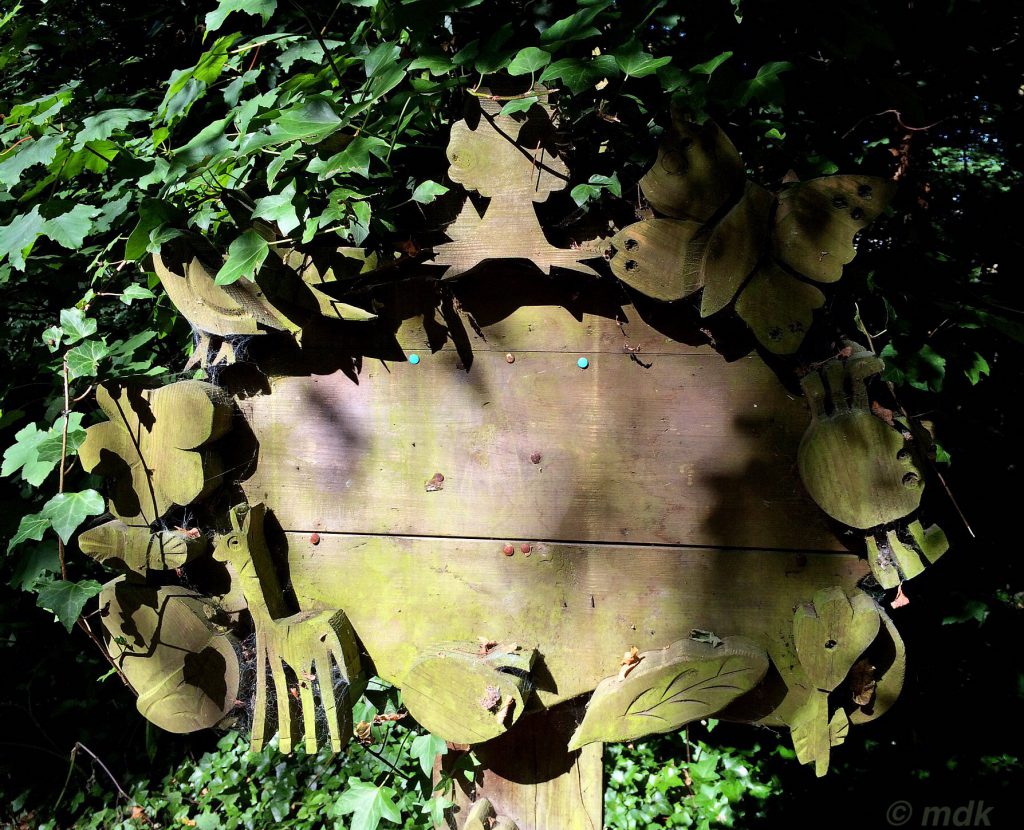 In just a few steps I came to a small totem pole. It seemed to depict a woodpecker. I’ve never seen one in real life so I resolved to keep my eyes open. Even so, my main focus was looking out for butterflies. Last time I came this way I didn’t see a single one, just lots of bees. This time I hardly had to look, they were fluttering across the path almost constantly. 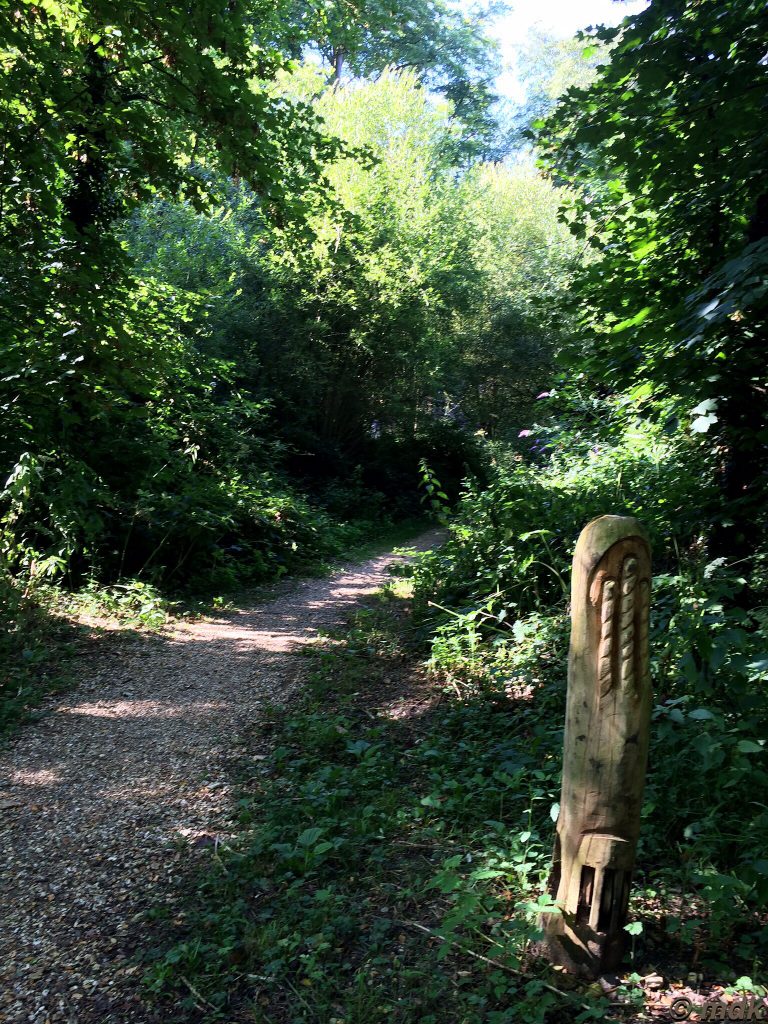 You would not believe the number of blurred shots I deleted from my phone. Trying to capture them was futile. Butterflies are terrible teasers, they meander past and land just long enough to get you excited, then fly off or close their wings before you can press the shutter. A red admiral got me very excited when it stopped close to me and didn’t show any signs of moving but, although I got a picture, it was too high in the buddleia bush to be clear. Not long afterwards a peacock did the same. This time I did manage to get a little closer by wading into the brambles but it closed its wings and steadfastly refused to open them again. It was almost as if they were doing it on purpose. 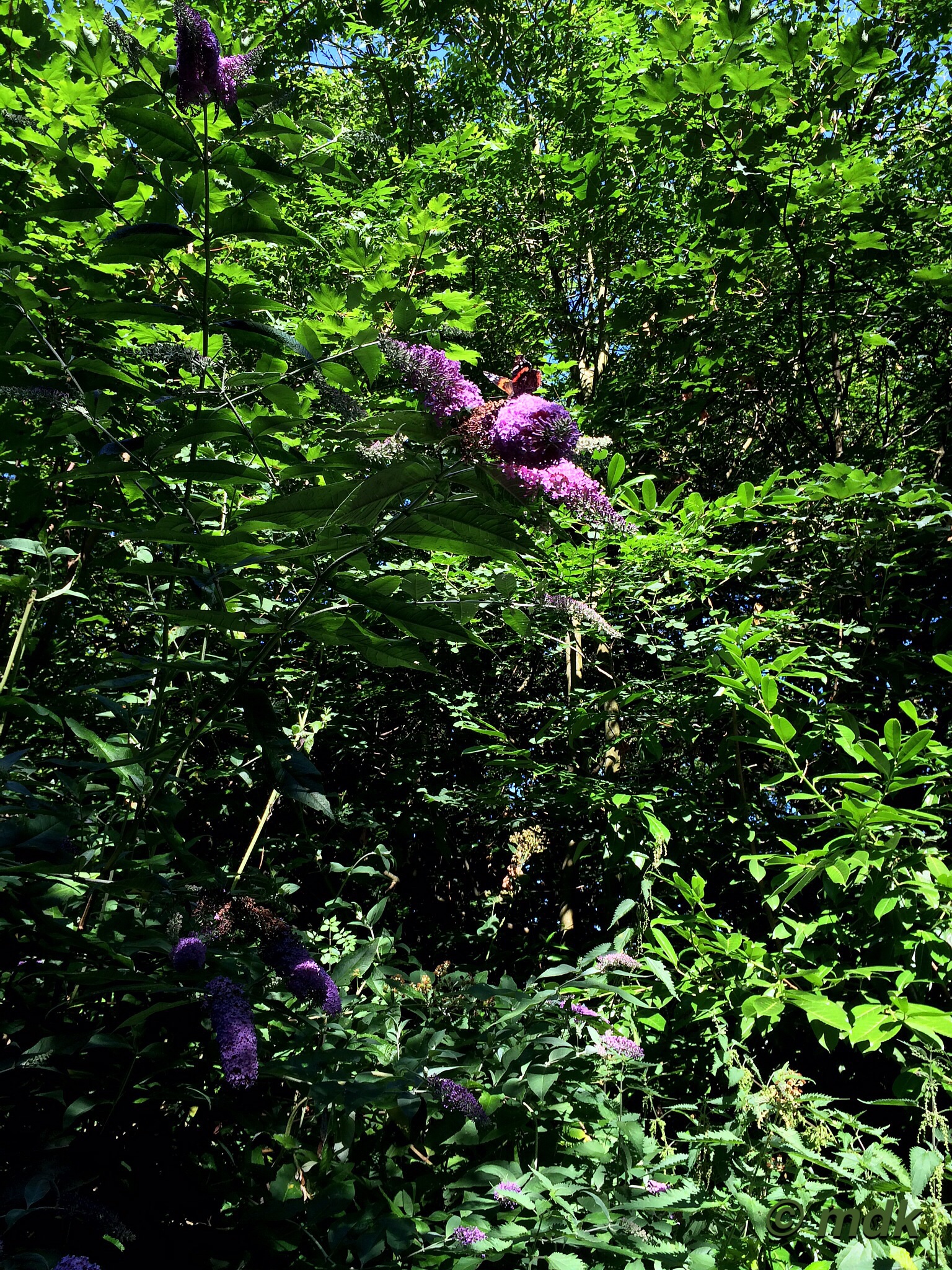 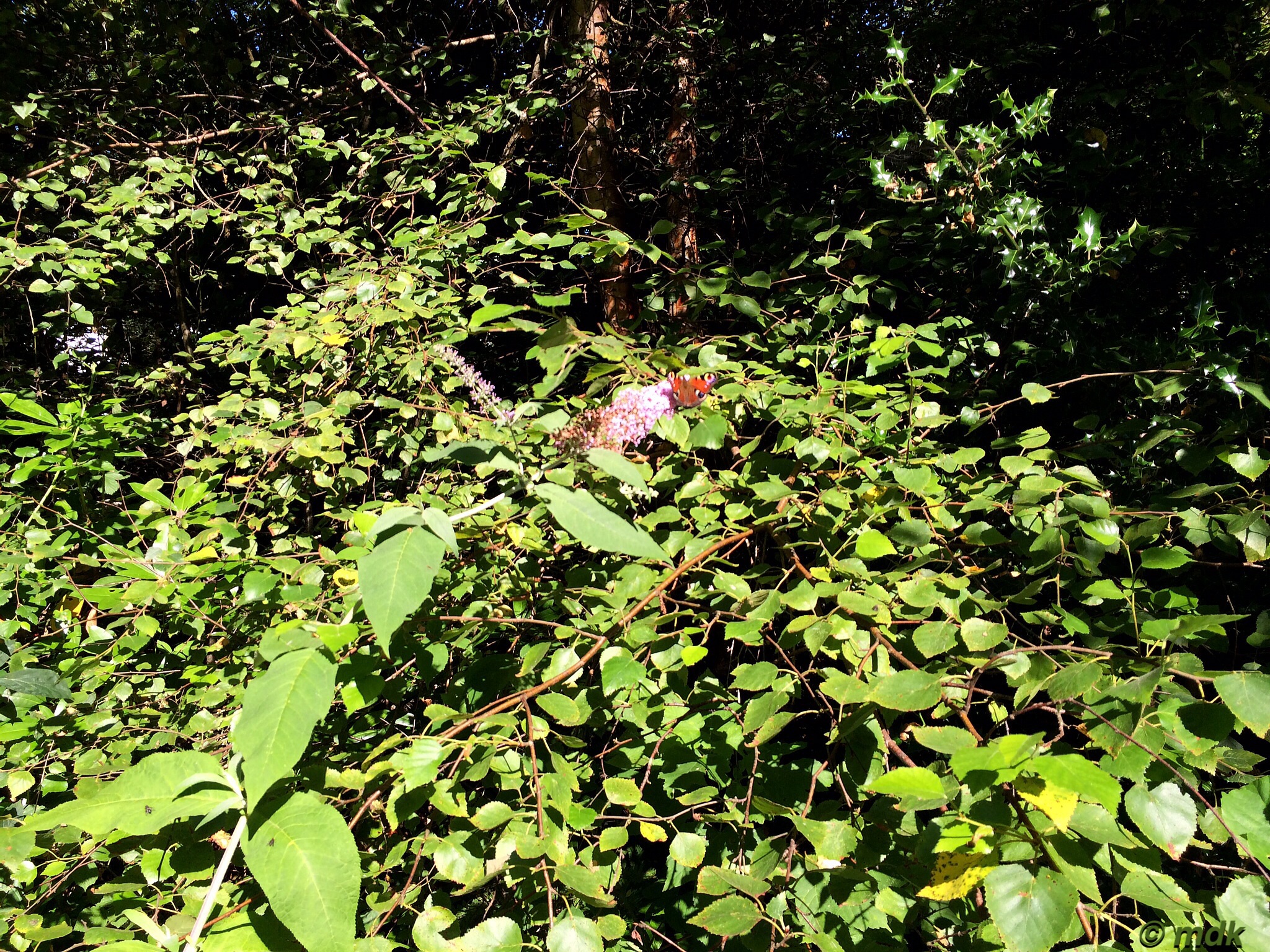 At least the plants couldn’t fly off or move and I spotted what I’m pretty sure are liverwort on the bank of the little stream. Even they were hard to get a good clear photo of though because they were on the opposite side of the stream to me and I was in grave danger of falling in. Luckily it is a very narrow and shallow stream but I didn’t really want wet feet. I was only wearing my sandals after all. 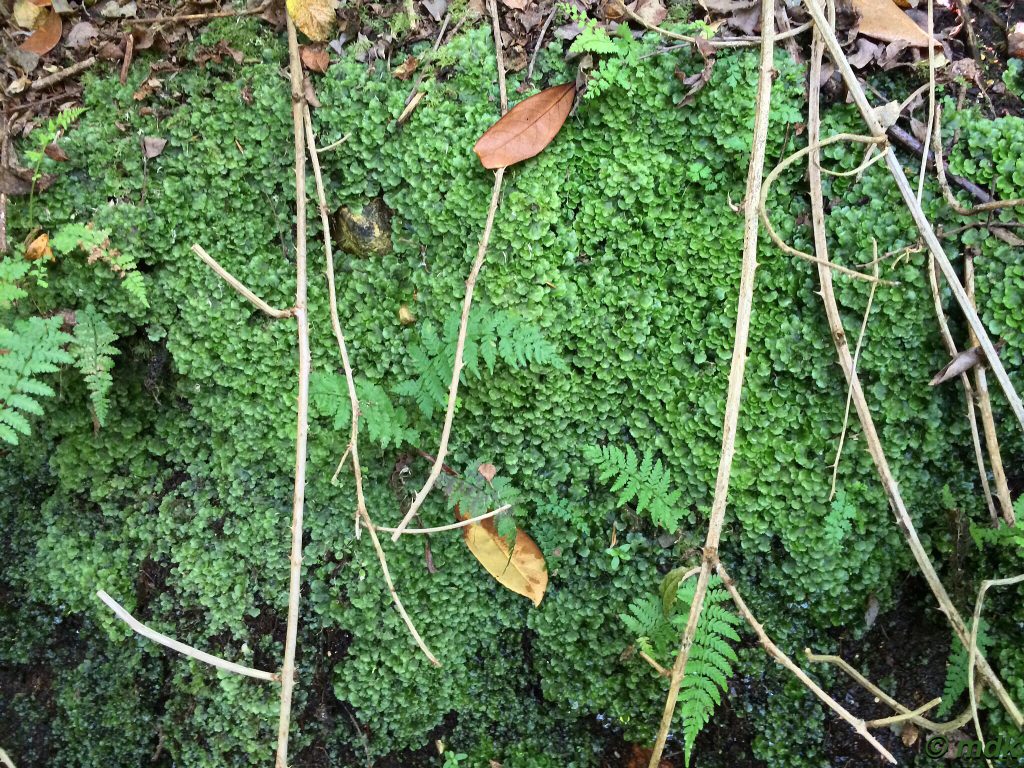 In a small clearing I came upon another sculpture. I’m pretty sure this was supposed to be an owl. Close by another tree was on the ground and I wondered if this would be made into another sculpture or left to rot? A similar tree, still standing but, sadly dead, had some rather interesting fungi but they were too high for me to get a good look. It seemed as if everything I wanted to take photos of was out of reach. While I was peering up at them though I noticed what looked very like woodpecker holes high in the trunk. Maybe there really are woodpeckers in these woods after all. 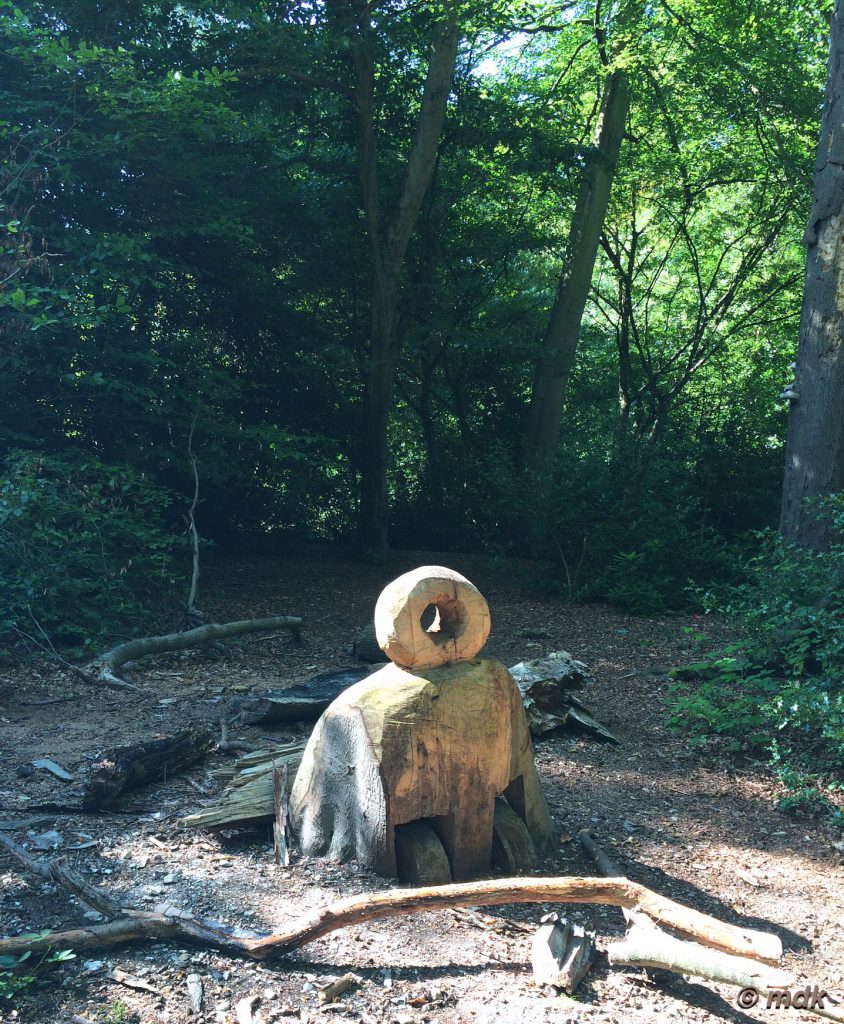 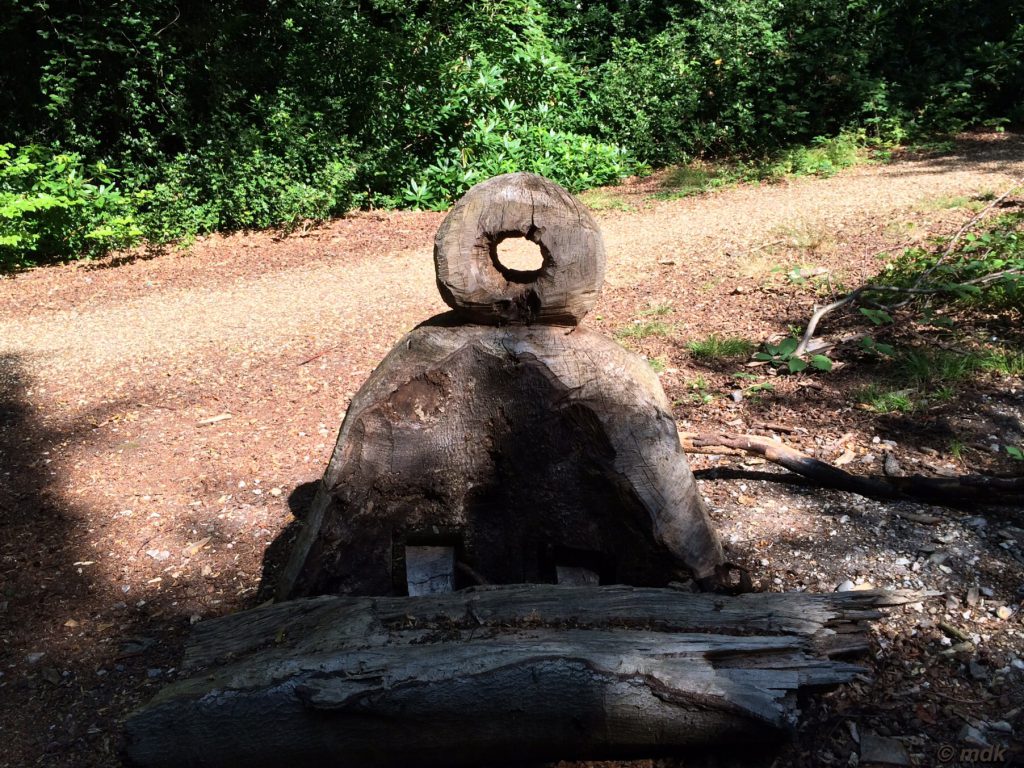 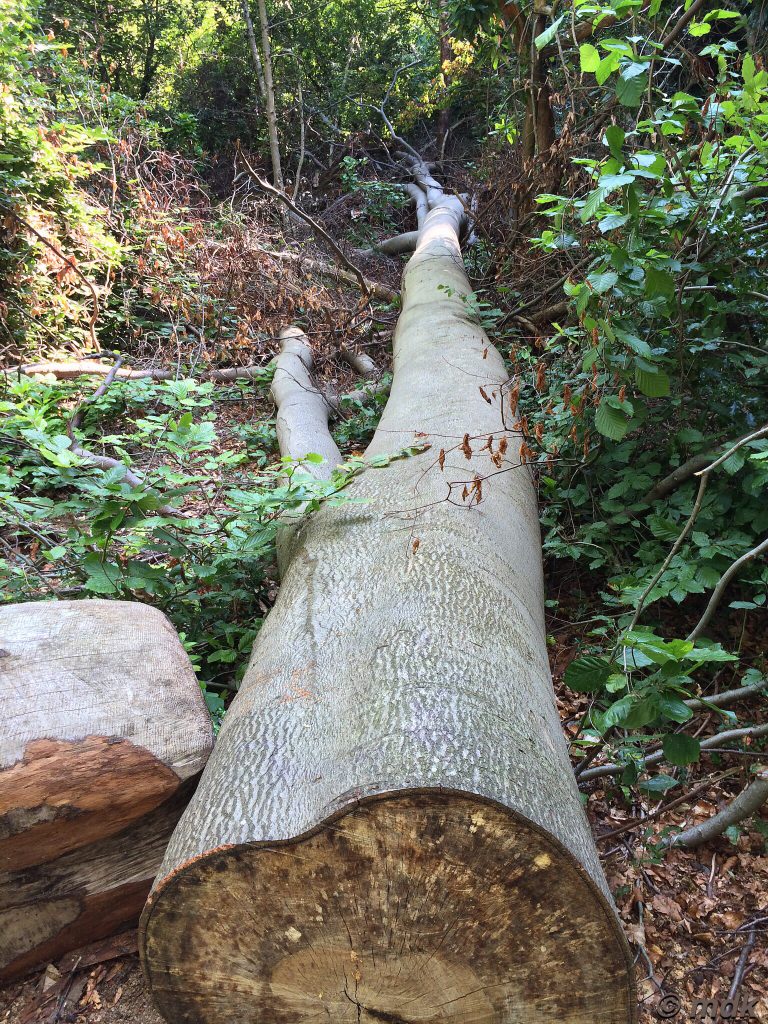 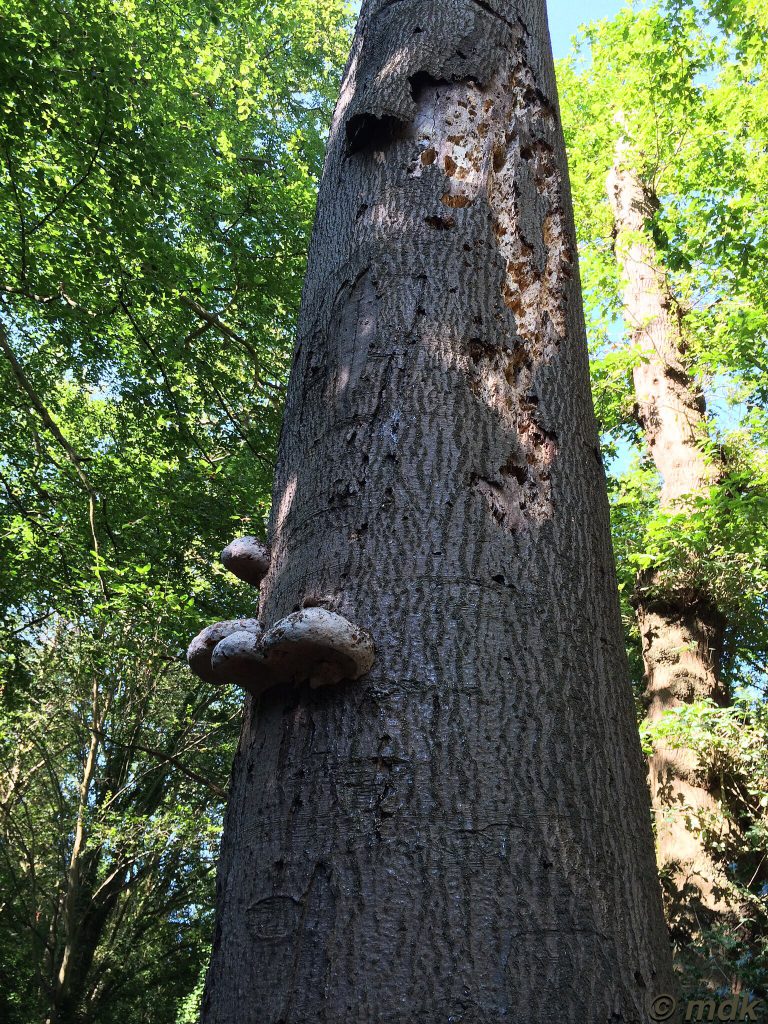 Not long after this I came to the bridge over the stream. Maybe calling it a bridge is taking things a little far because it’s really nothing more than a few planks and some handrails but still. At this point the crystal clear stream is a little wider and, with the weeds in it and the reflections of trees and sky on it it had the look of a Monet painting to me. 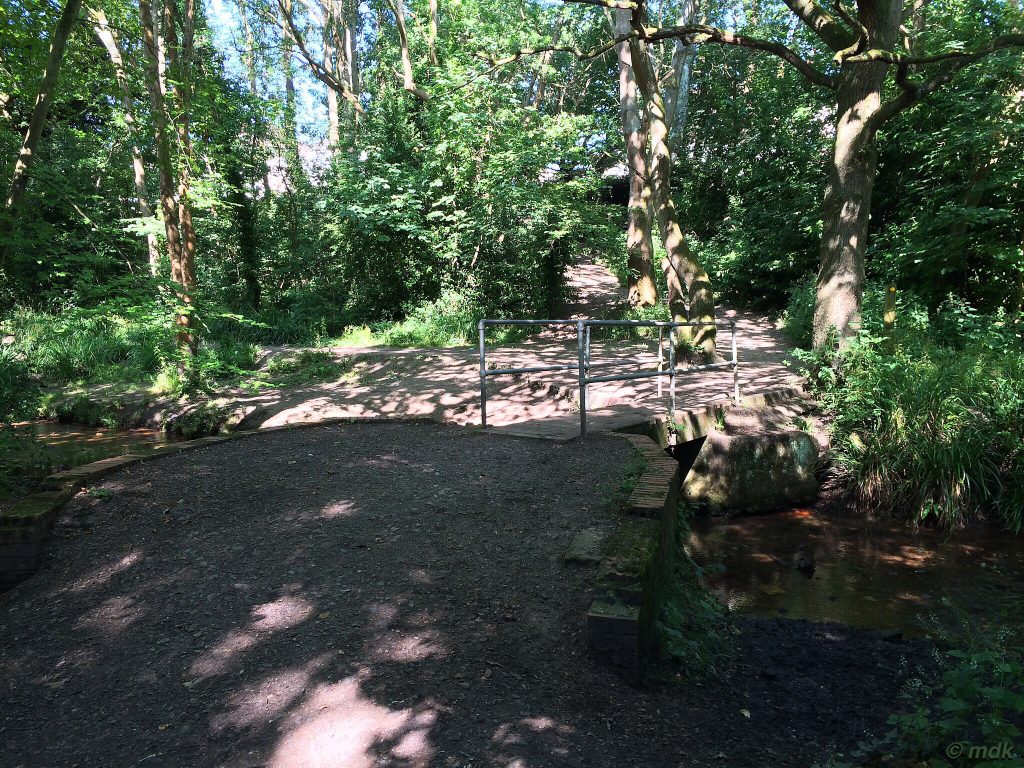 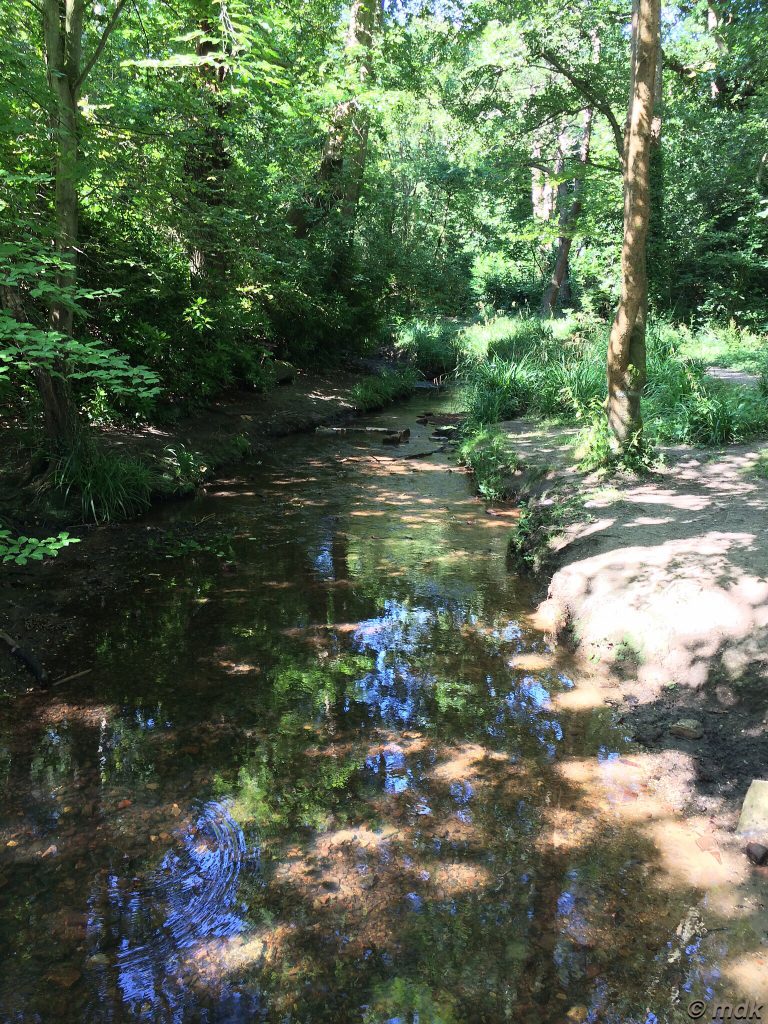 On I went along the path. The strong sunlight shining through the foliage above gave the light a green tinge as if through stained glass. An old dead tree was so covered in moss it hardly looked like a tree at all until I came to the other end and saw it was hollow all the way through. Every so often, glimpses of trees reflected in the water beside me gave the place an eerie ethereal feel. 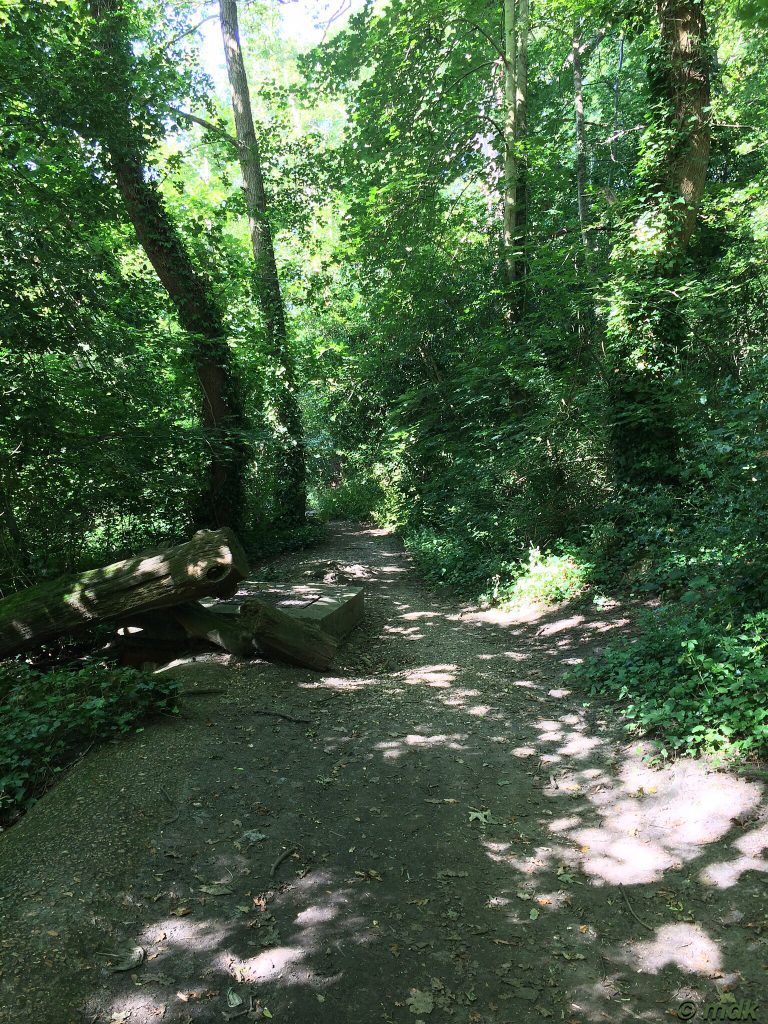 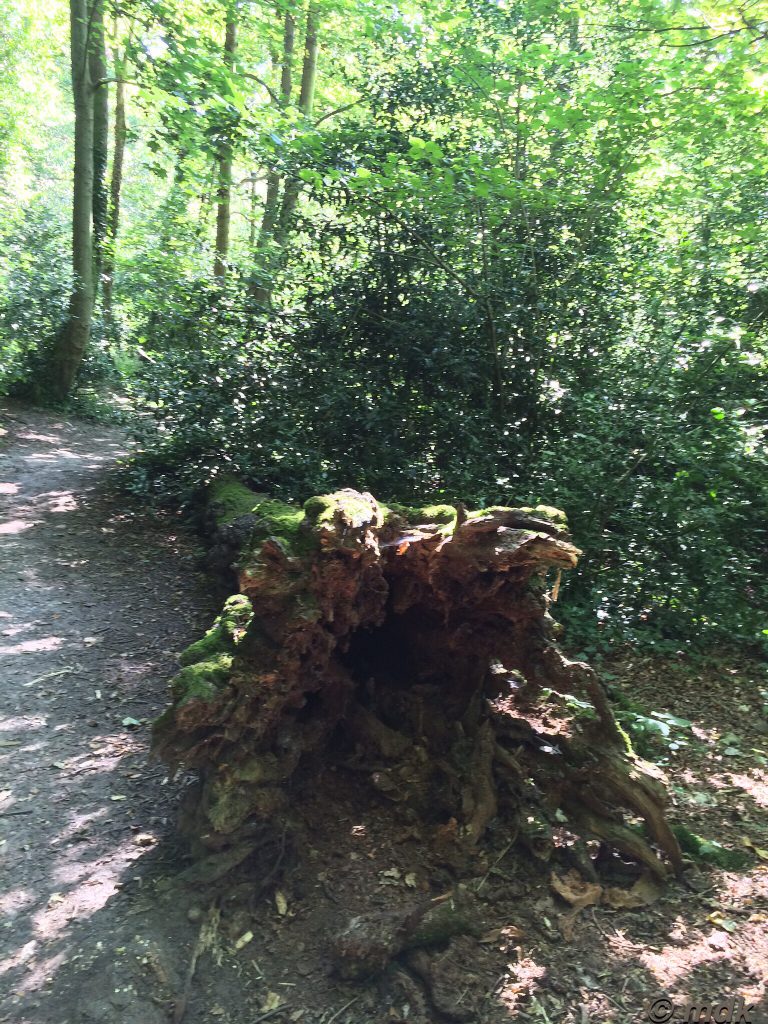 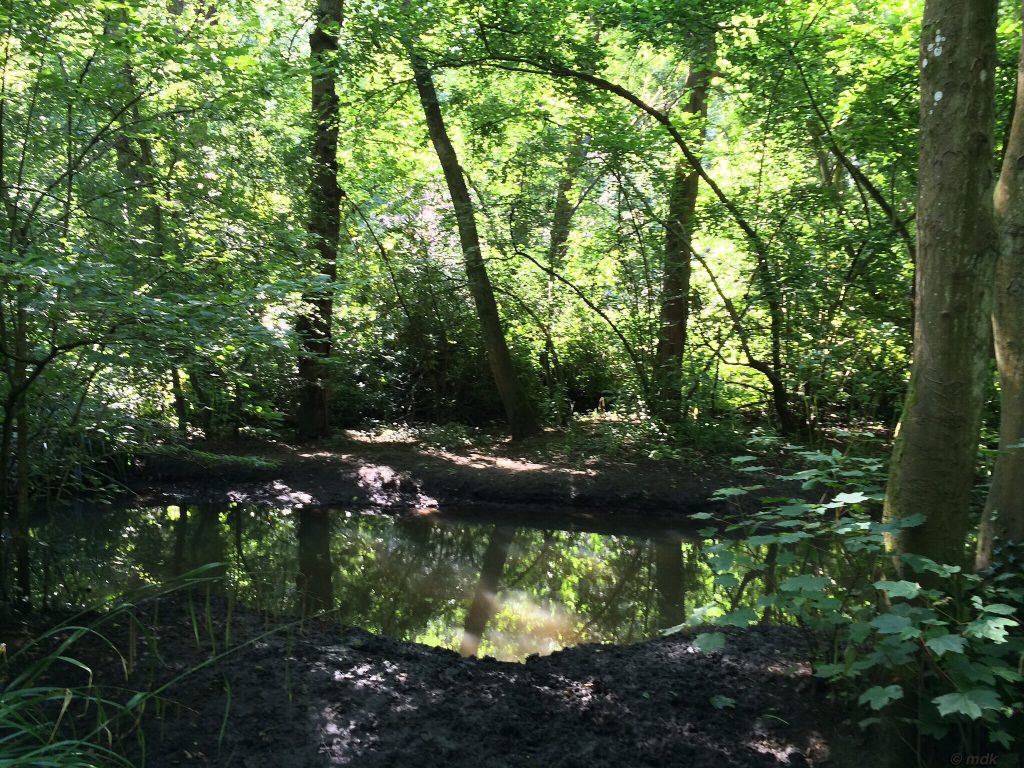 In places the path was a little muddy where water trickled down from the banks above. This trail is one of many in these woods and runs through a gully at the lowest level, in winter and early spring it’s all but impassable. Just before the point where the trail divides there’s a kind of landmark. Four trees have grown together, their roots forming bridges and tunnels, entwined as if they’re holding hands. 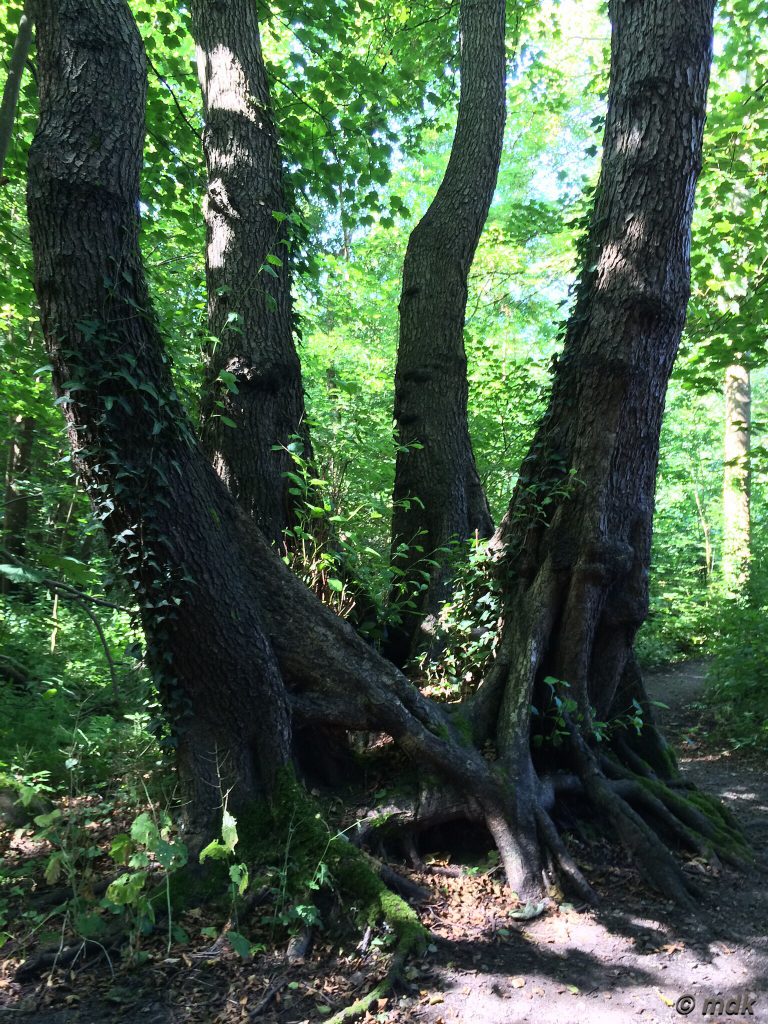 Not long after I’d passed the four trees a small blue butterfly, at least I think it was a small blue, twirled around me. It landed on a leaf and I did capture a photo but not a good one. Before I could click again it was off. Just before the path rises towards the road there’s another bridge. Looking over the side I could see no water at all, the stream before me was completely crowded out by Himalayan balsam. Two weekend walks in a row I’ve see this, yet I’ve never seen it before. Given how prolific it is supposed to be at spreading seed I’m worried the local steams and rivers will be nothing but balsam before too much longer. Maybe the case for eradication isn’t as bad as I thought because I’d hate to lose all the native wild flowers. 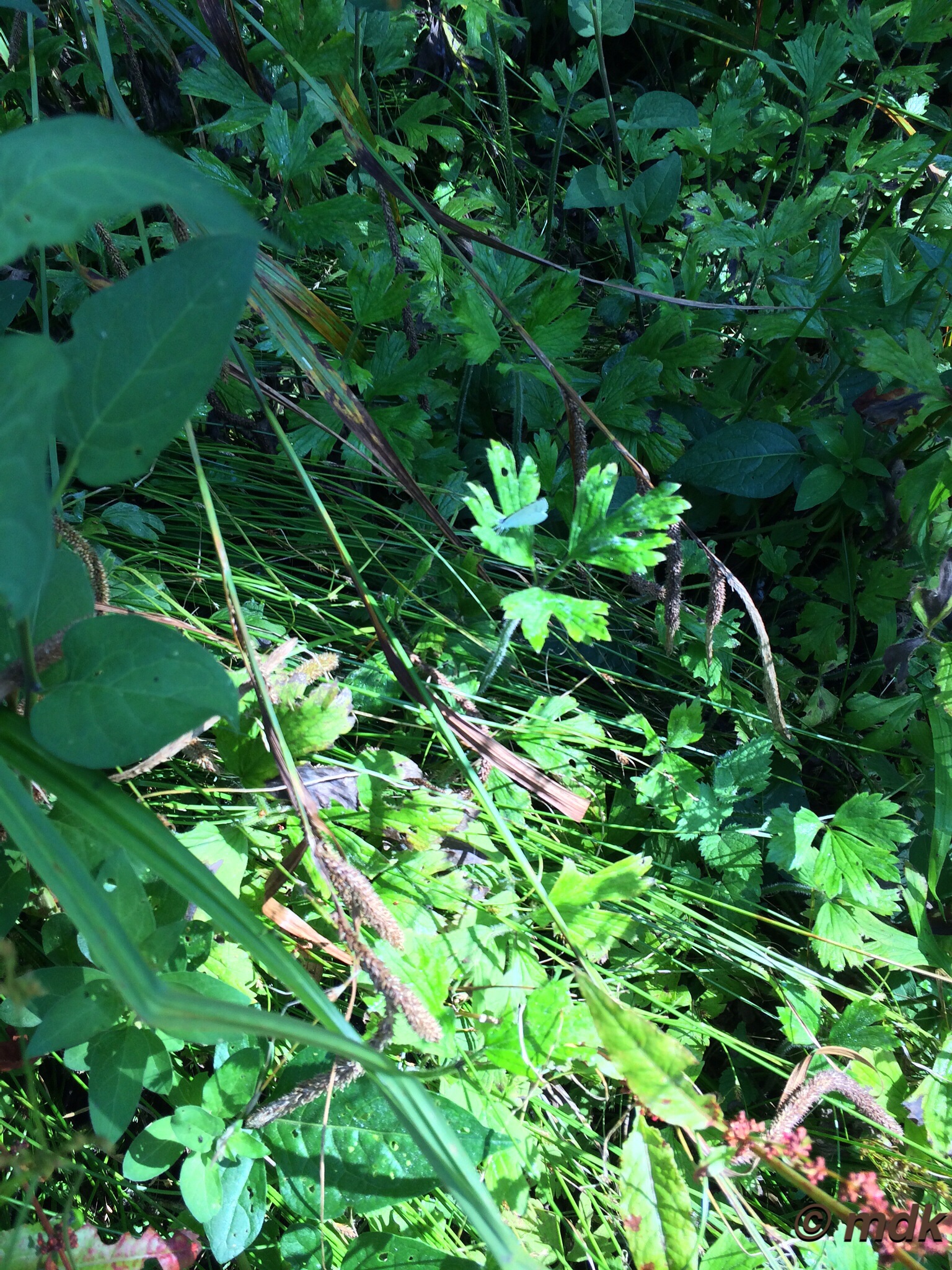 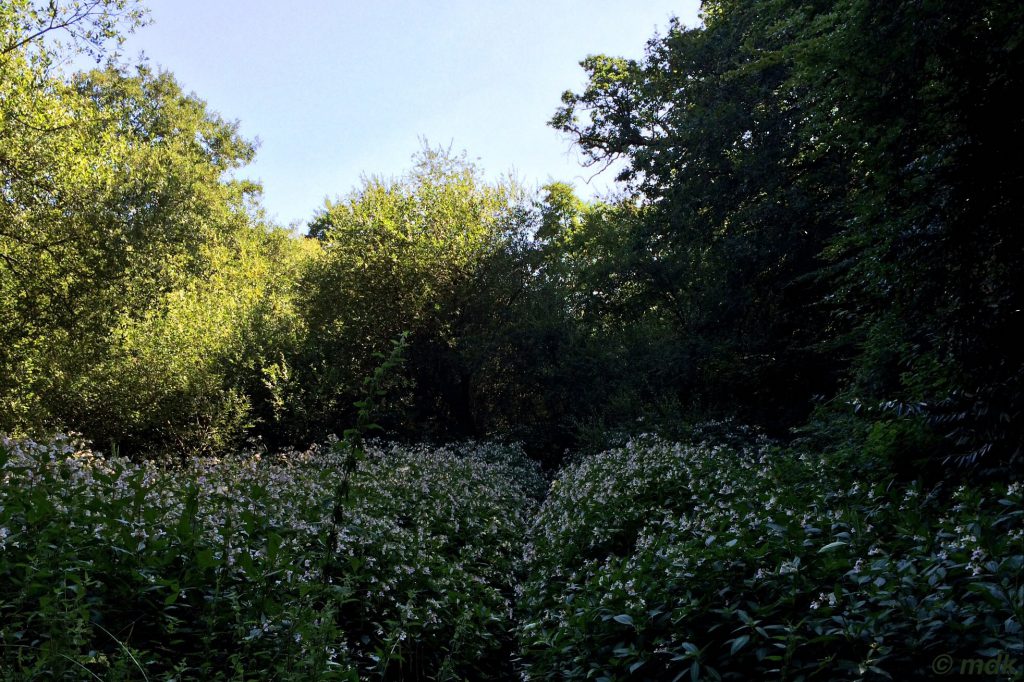 The slope up to the road is steep and I emerged feeling slightly disoriented. So much so I had to stop and consult the WalkJogRun map to make sure I was taking the correct trail before I set off across the road and into the woods once more. I couldn’t help feeling a little disappointed that I’d walked the whole butterfly walk without getting a decent shot of a single butterfly. If only I had a telephoto lens! 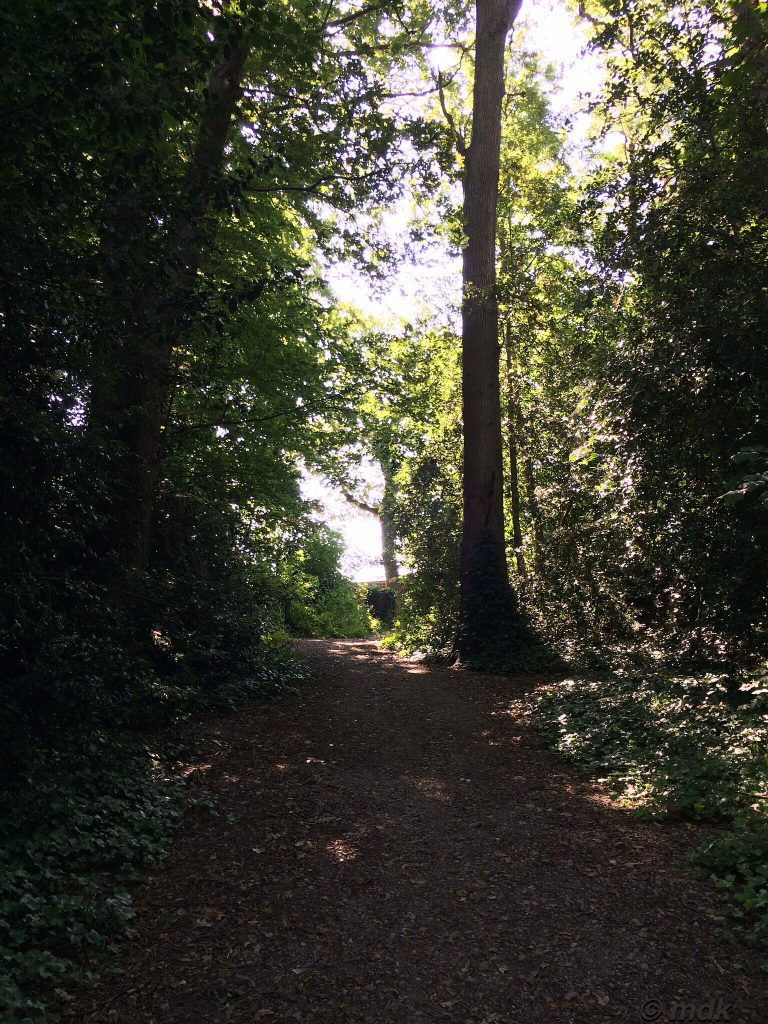 The final stretch of the trail skirts Jurd’s Lake and crosses Victoria Road before leading to the shore. Ironically this was where the butterflies suddenly started to cooperate, at least one of them did. A speckled wood was most accommodating and posed on a leaf very nicely for me until I’d taken my fill of pictures. Feeling pleased with myself I made for the shore. 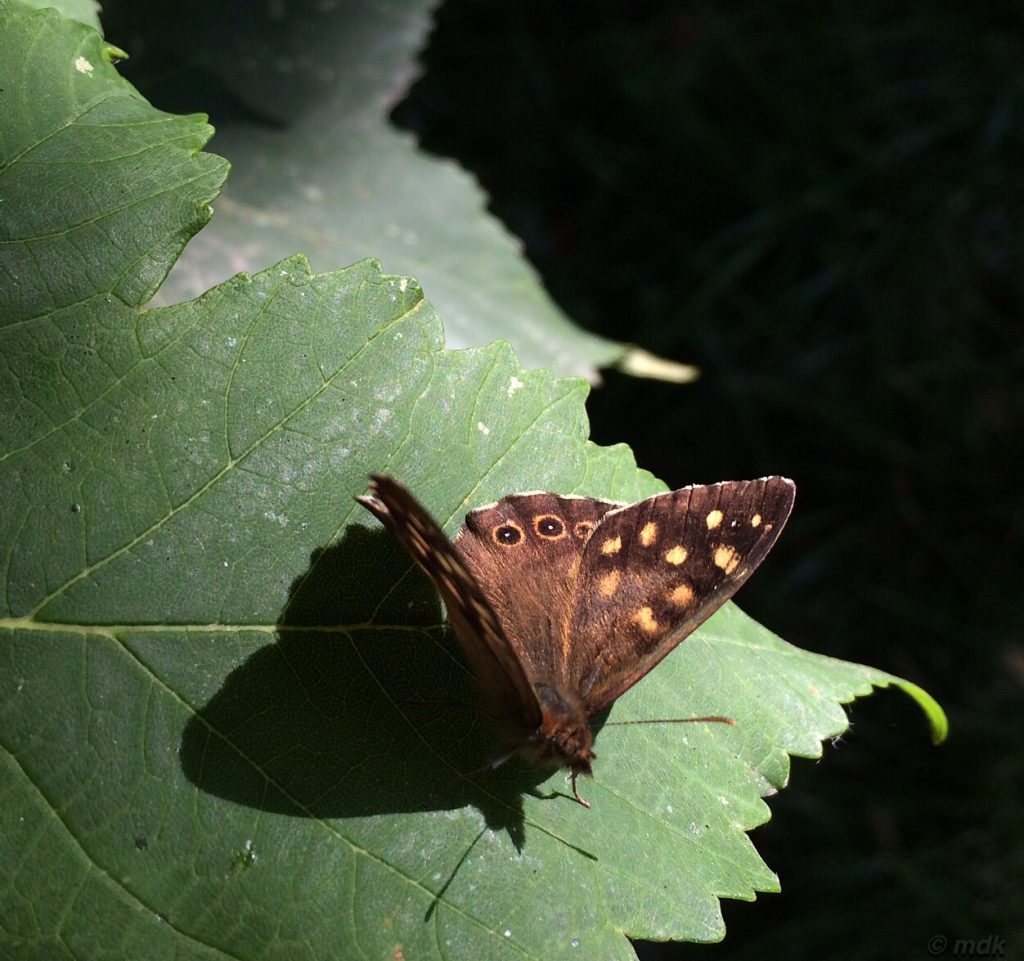 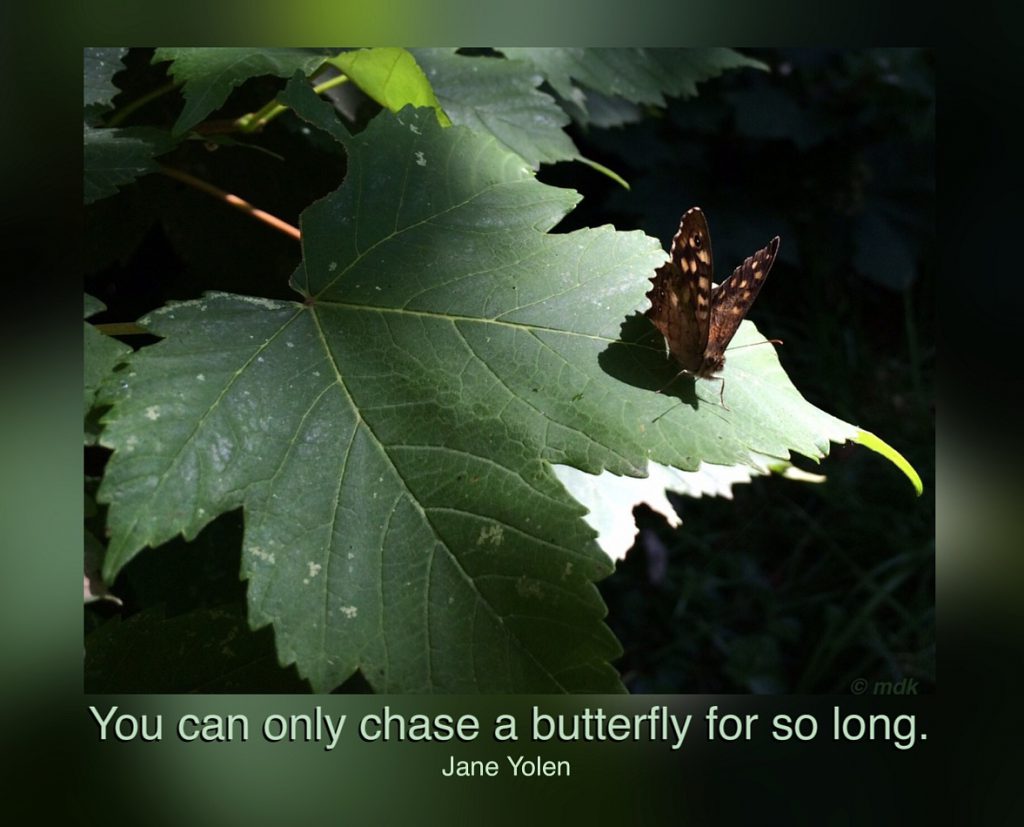