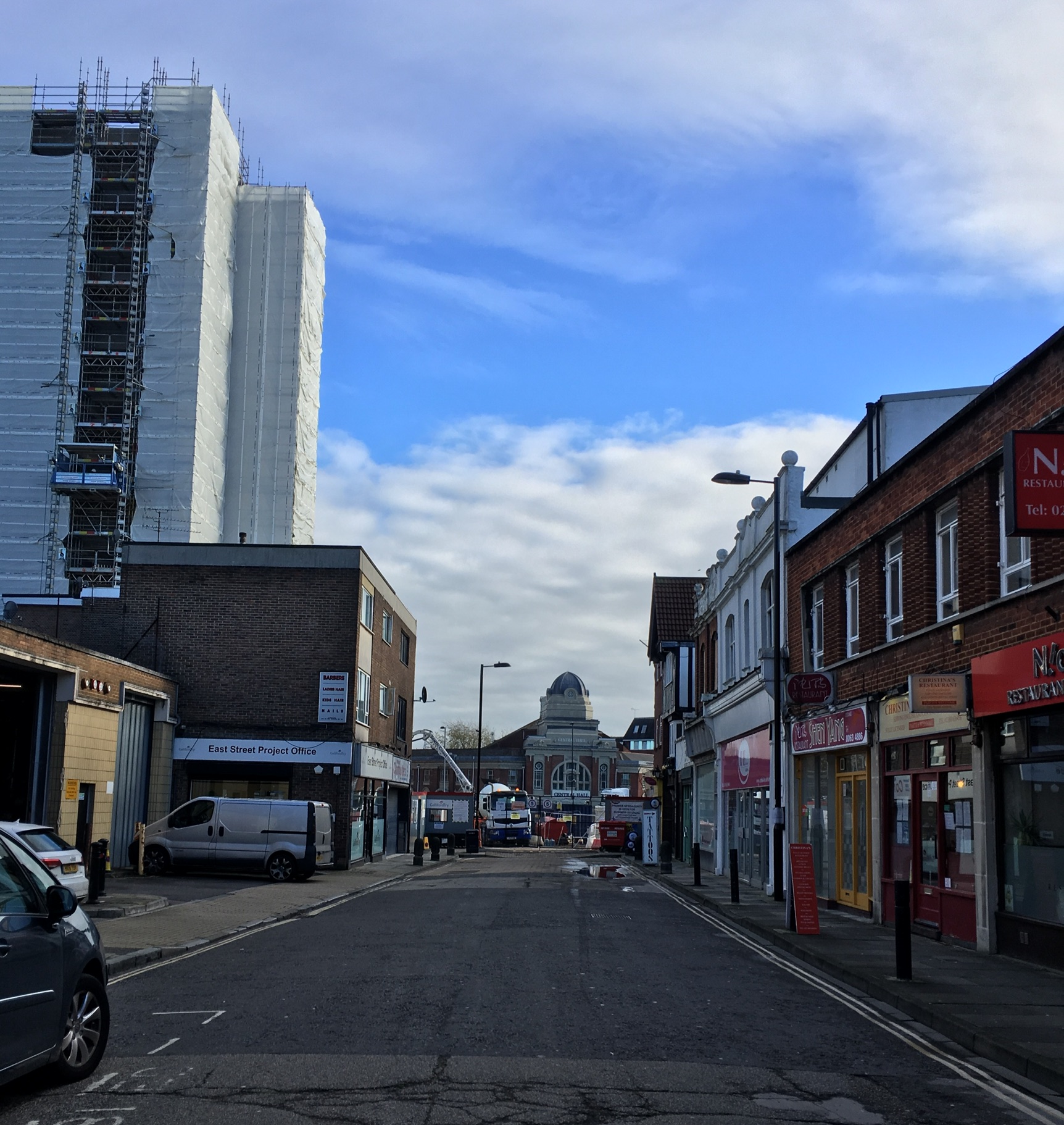 CJ and I left the Bargate Centre with mixed feelings. The new plans look exciting but the ghosts of old memories make the demolition of the building feel a little sad. We walked down East Street in silence, each remembering those far off days. Soon we’d come to another place of memories, the East Street Centre.

The first shopping centre in Southampton has been demolished now but it was another place we used to walk through when the boys were young.  CJ remembers the mosaic tunnel he used to hide in and Bard was always fond of the music shop where he bought guitar strings. There was a half price gold shop, a Comet electrical store, and a furniture shop. The place was never popular though and was often something of a ghost town. In 2013, it closed and, during my last days at work in Dukes Keep, I watched it being demolished.

Like the Bargate Centre, many plans have come and gone but it finally seems as if work will be starting soon. The latest plans may not be as exciting as the regeneration of Western Esplanade or the northern walls  but it looks as if the end of East Street, closed off when the shopping centre was built, will be reopened, linking St Mary’s to the city centre again. CJ and I stopped for the customary look through the metal gates at the rubble strewn wasteland where East Street Centre used to be. 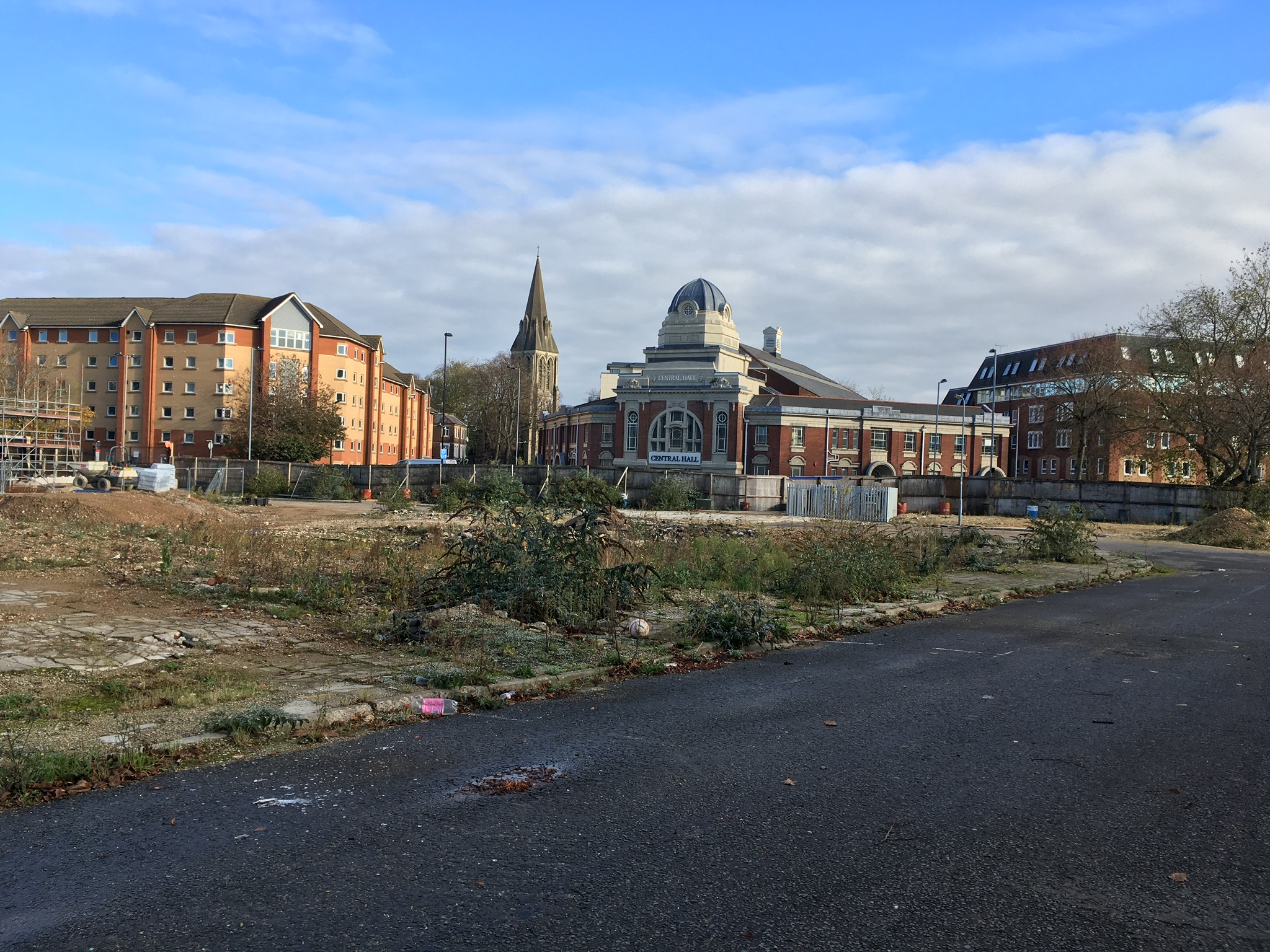 When the demolition began the underpass between Threefield Lane and St Mary’s Street was sealed off. Until then I’d used it most days on my way to and from work so it was a bit of a blow. There are pedestrian crossings in the area so it didn’t stop me crossing the road but I missed the paintings on the walls and was quite cross with myself that I’d never taken any pictures of them. When we came out onto the road today we discovered the underpass had reopened. 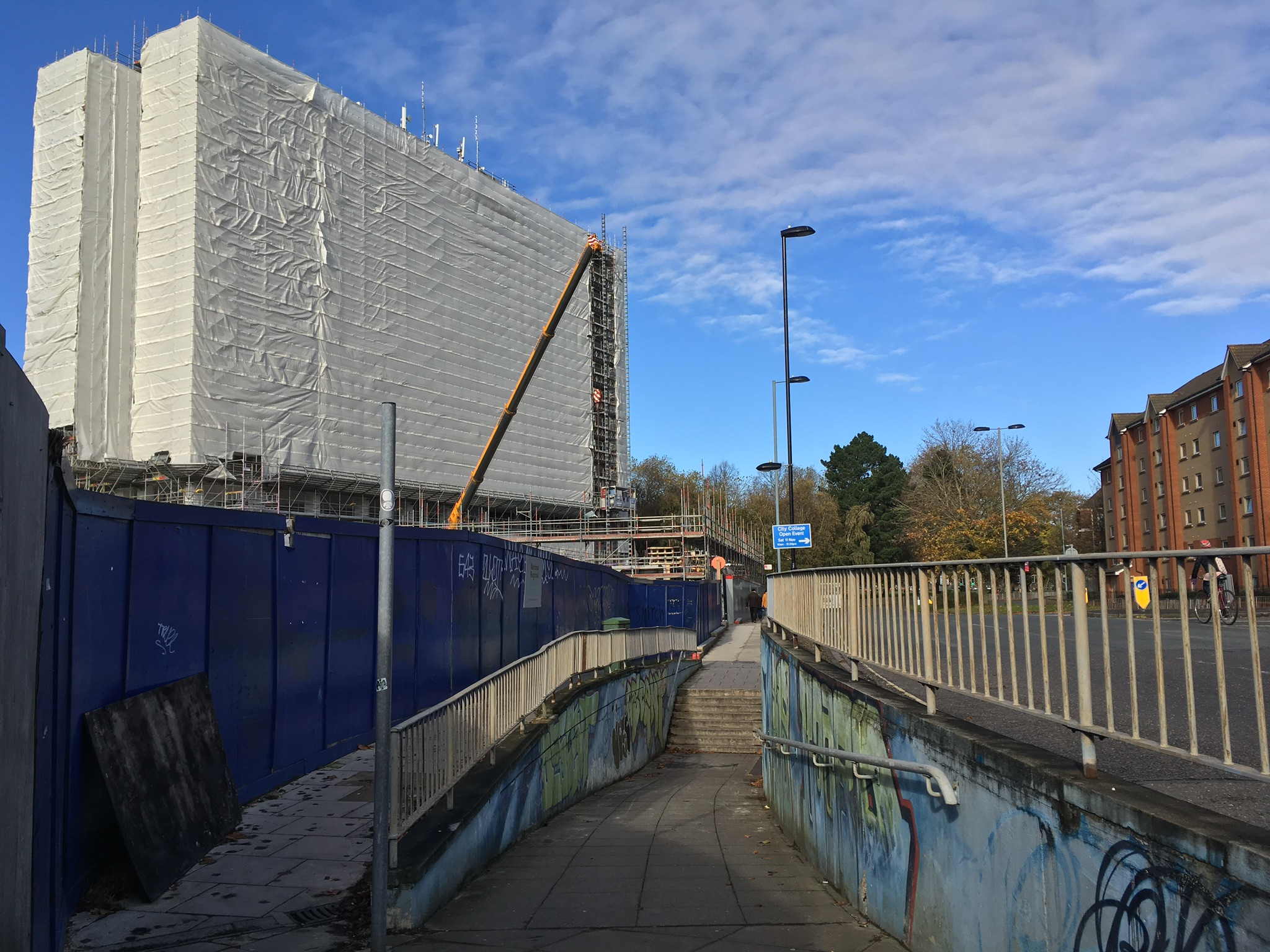 The paintings were a little the worse for wear but they were still there. They were painted by local graffiti artist turned professional mural artist, de5ign4, a.k.a. Slam Daniels, who also painted the murals in nearby St Mary’s Street. Until I saw them again I hadn’t realised quite how much I missed them. We walked slowly through the underpass taking photos as we went. 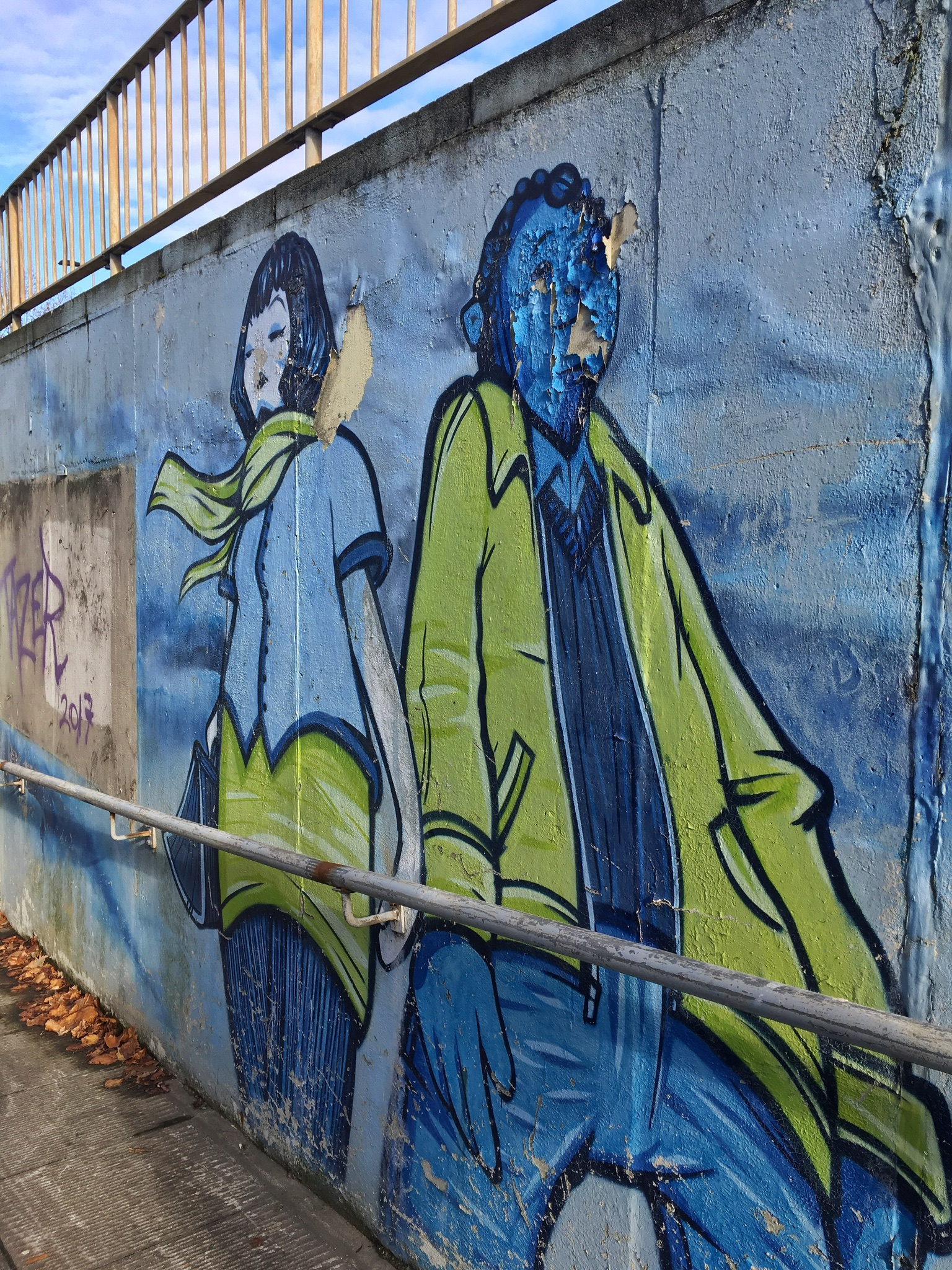 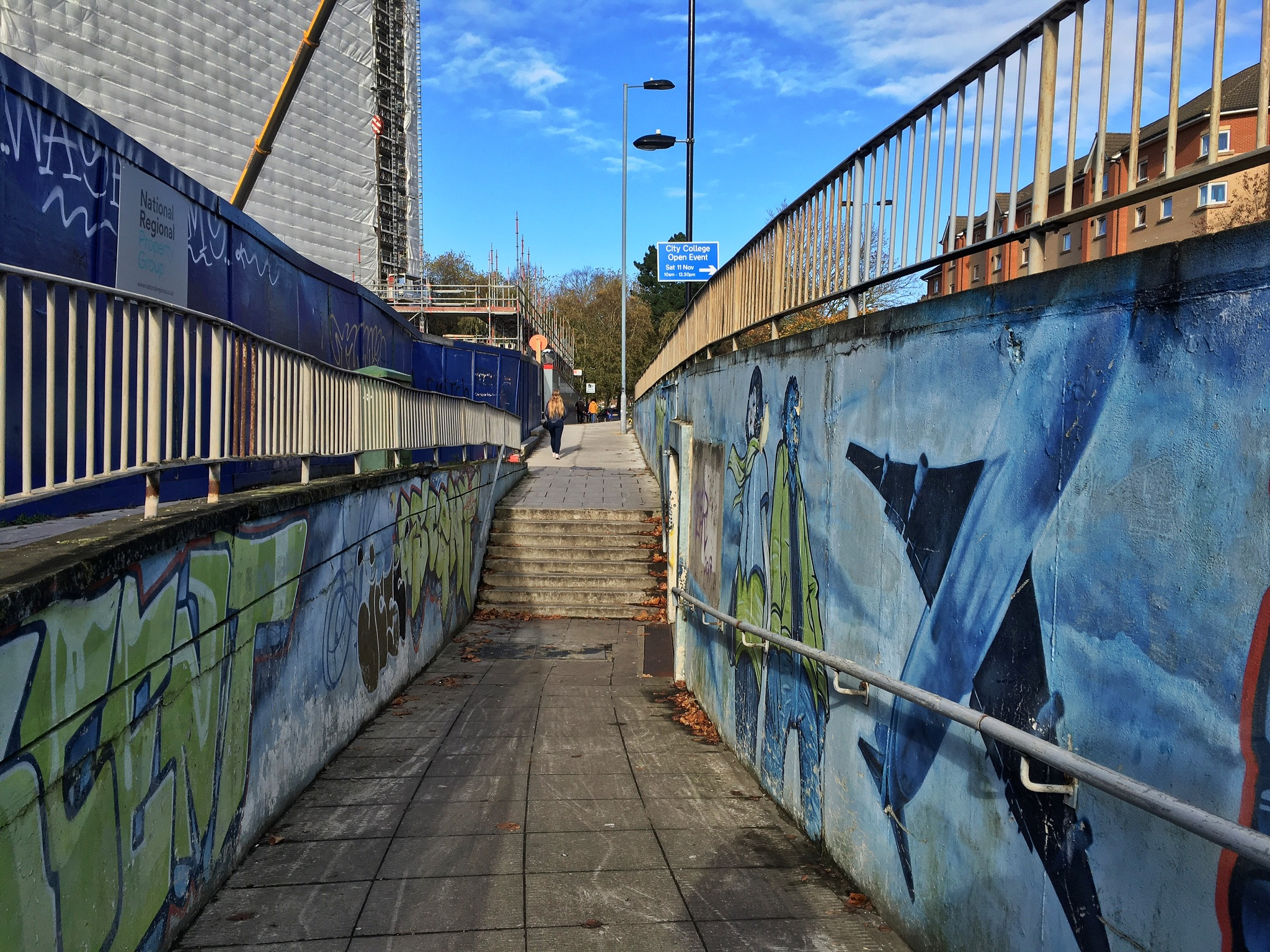 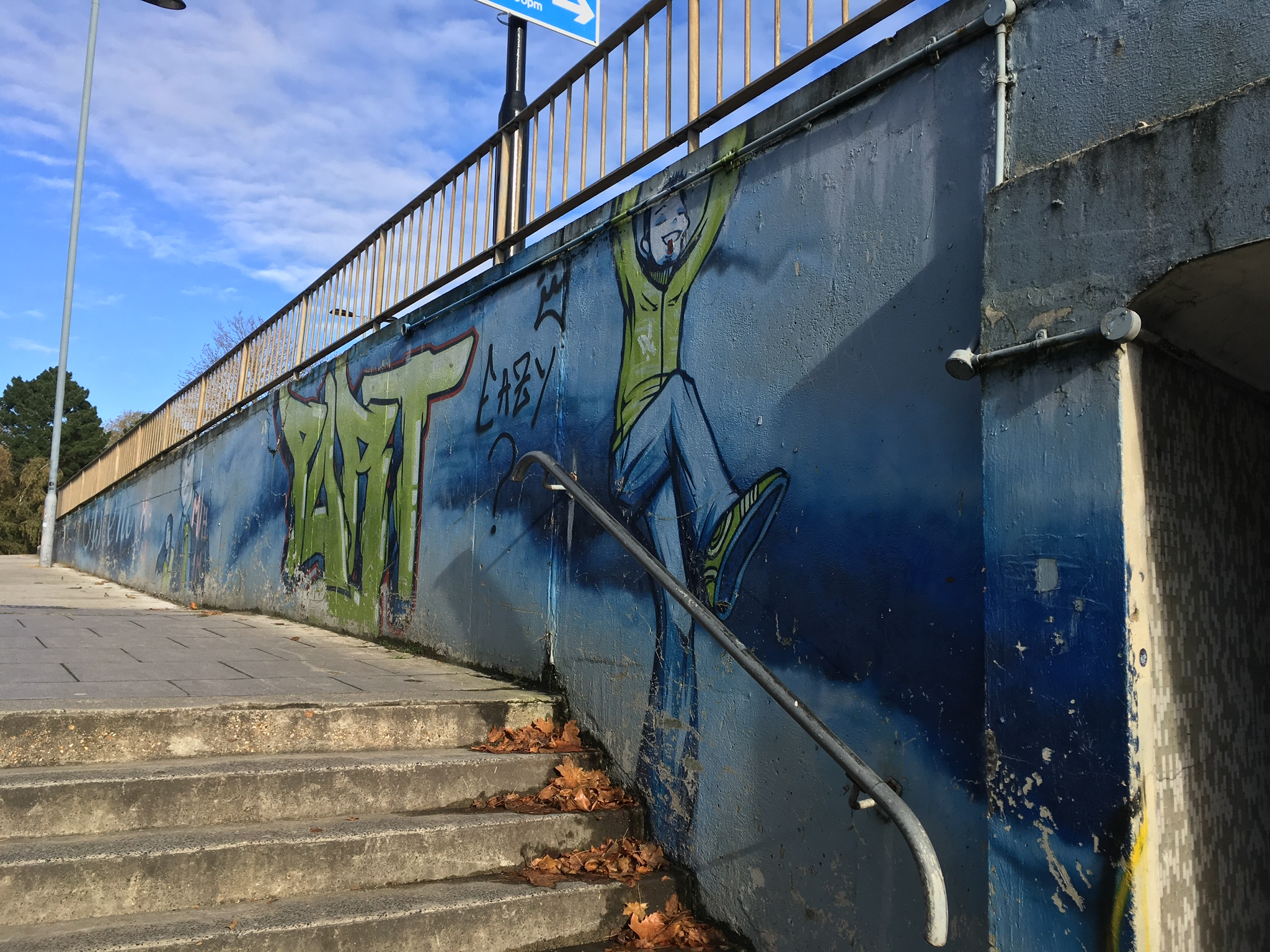 The walls of the tunnel itself are covered in mosaic tiles so, apart from a few boring tags, they are unpainted, but the walls of the slopes at either end are filled with pictures. Most are colourful depictions of the wide variety of people you might see in the area. They’re full of life and movement and one of the things I really love about them is the way they reflect the ethnic diversity of the area. 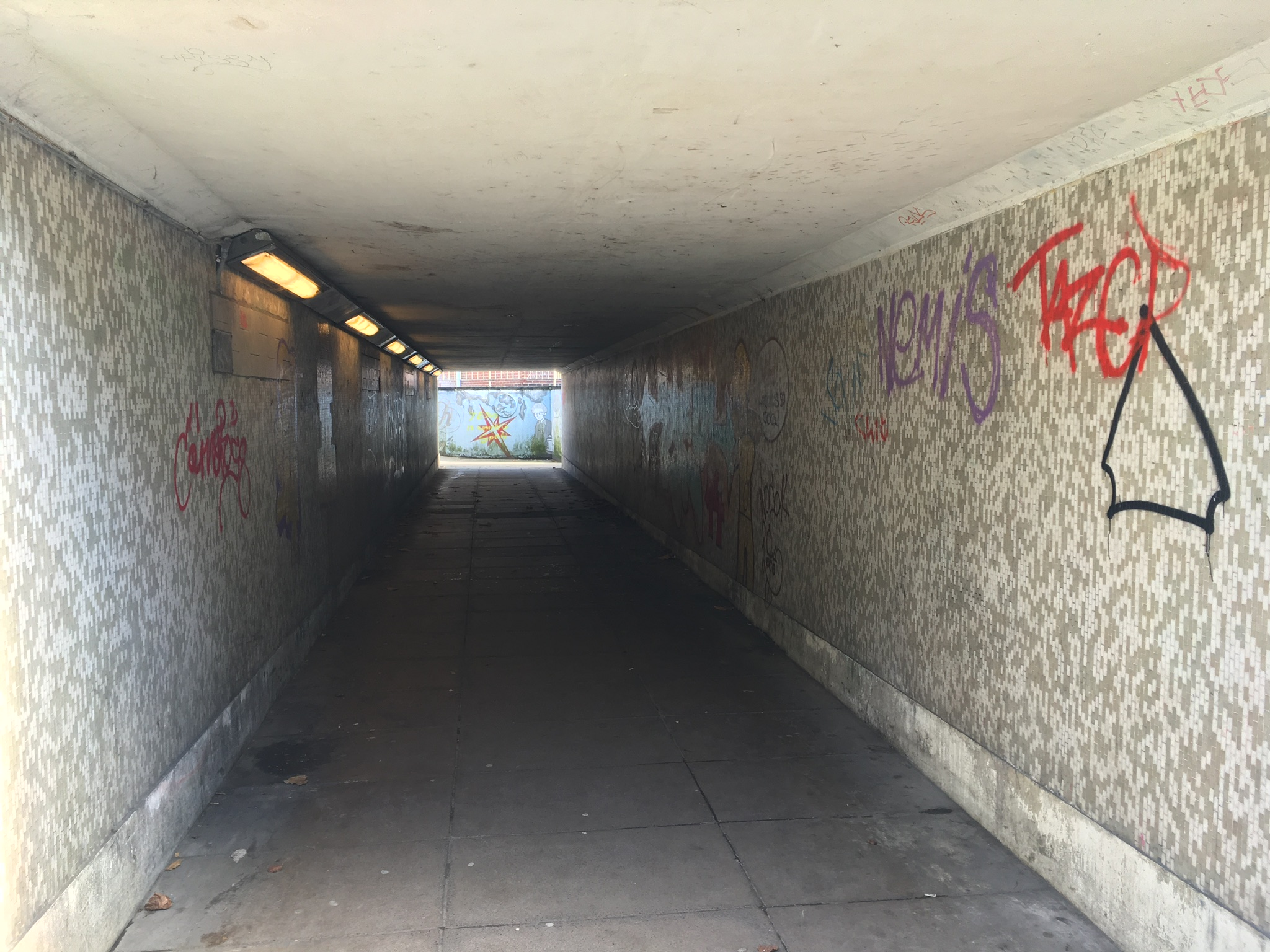 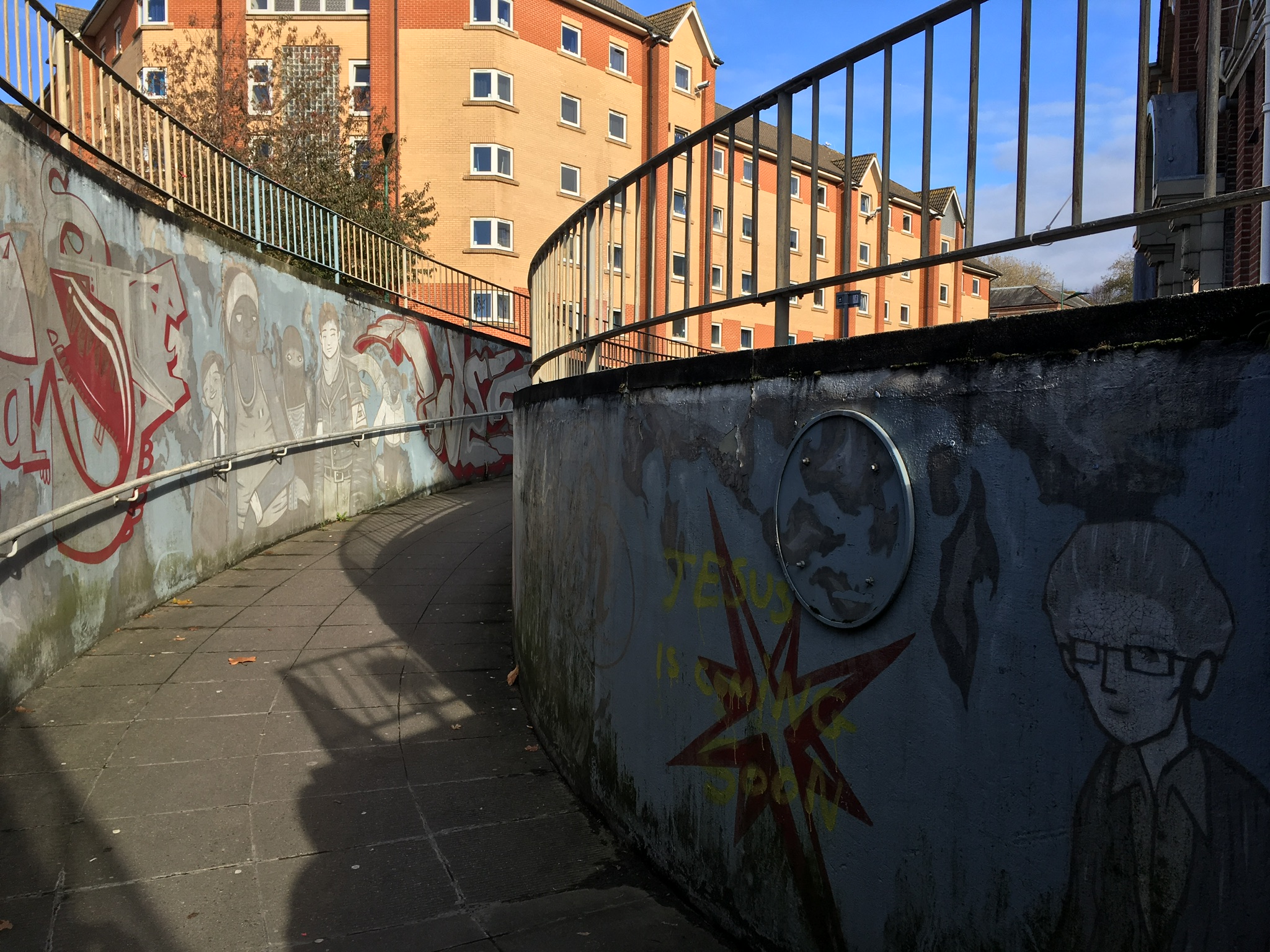 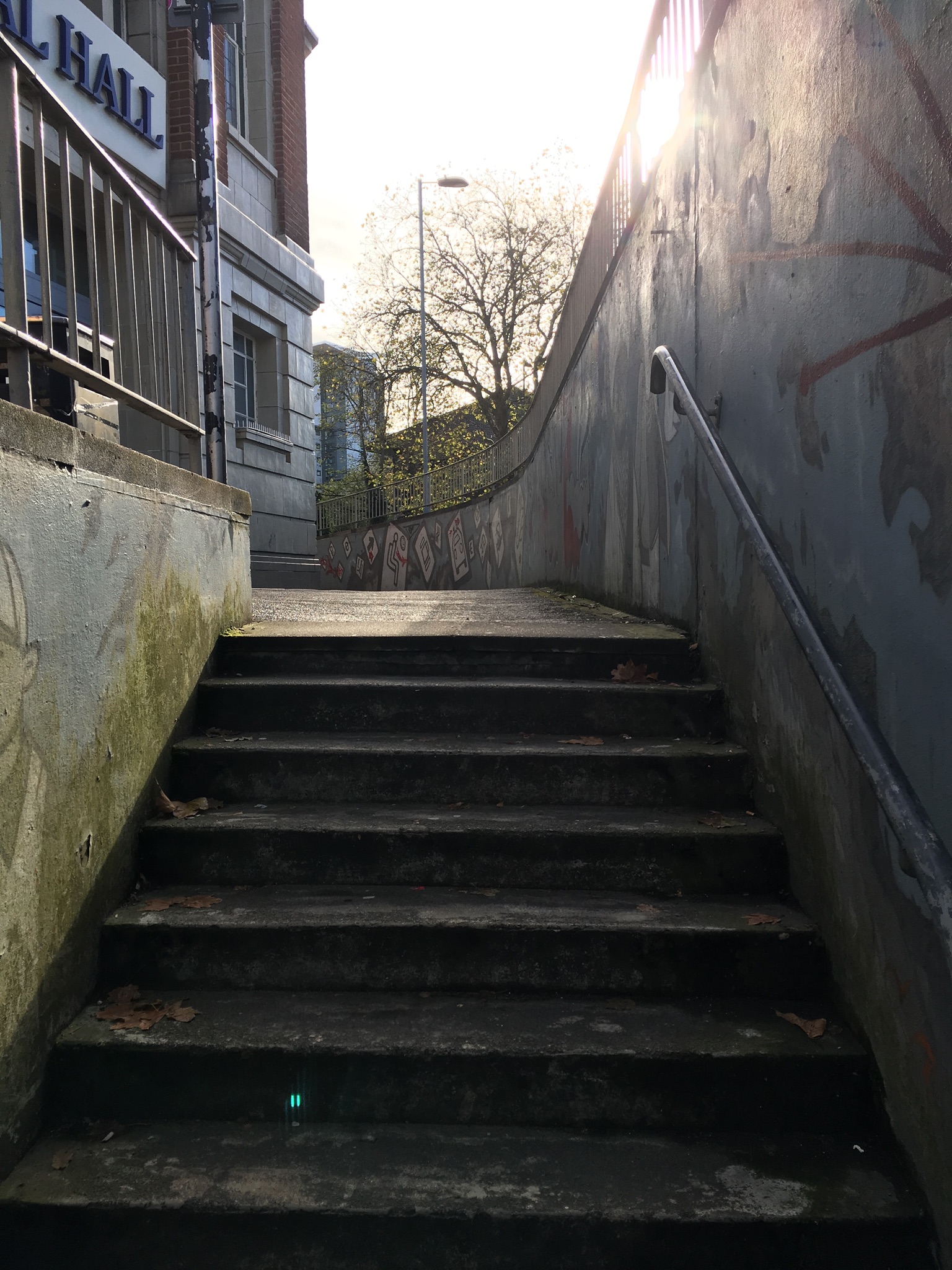 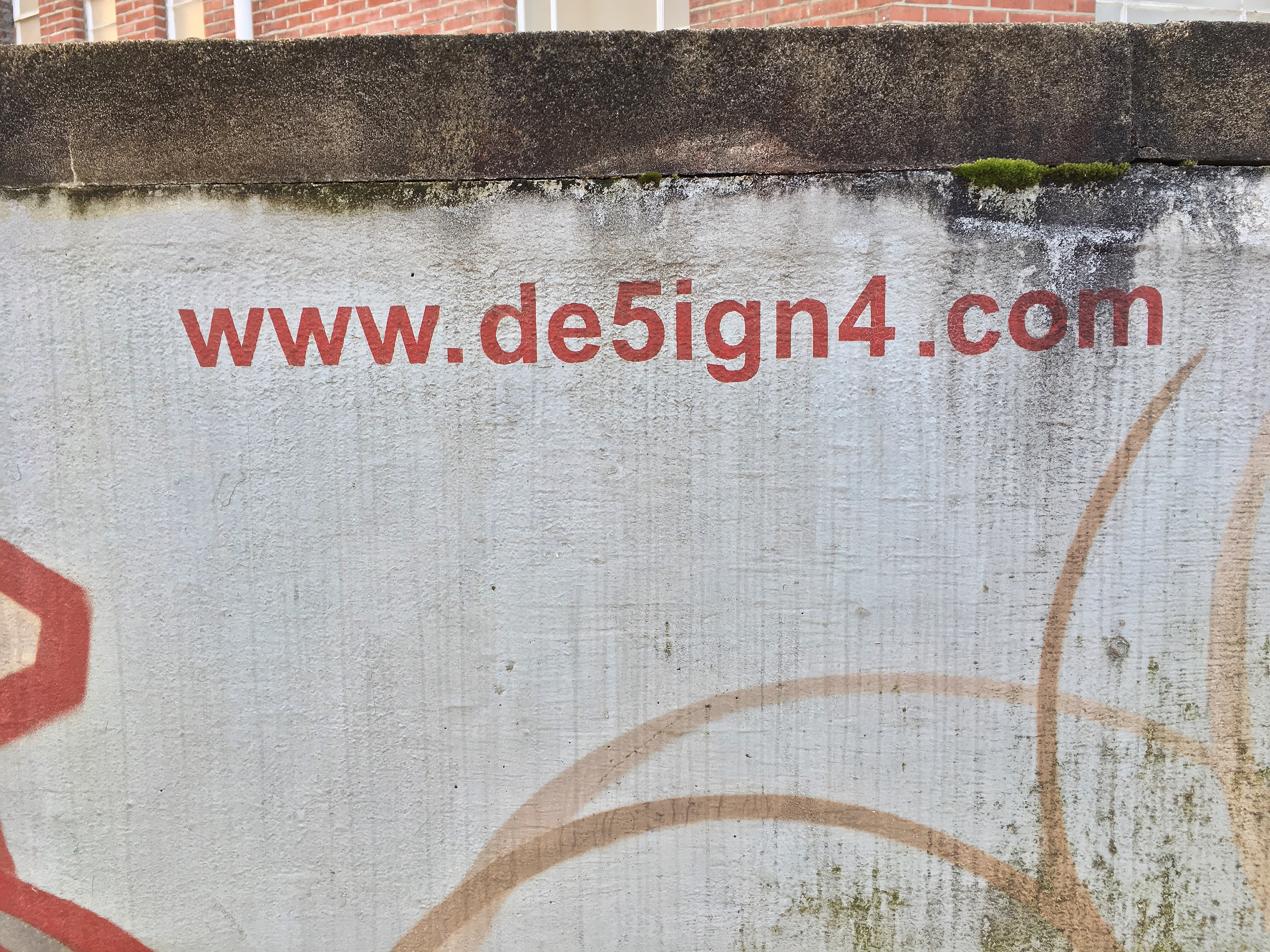 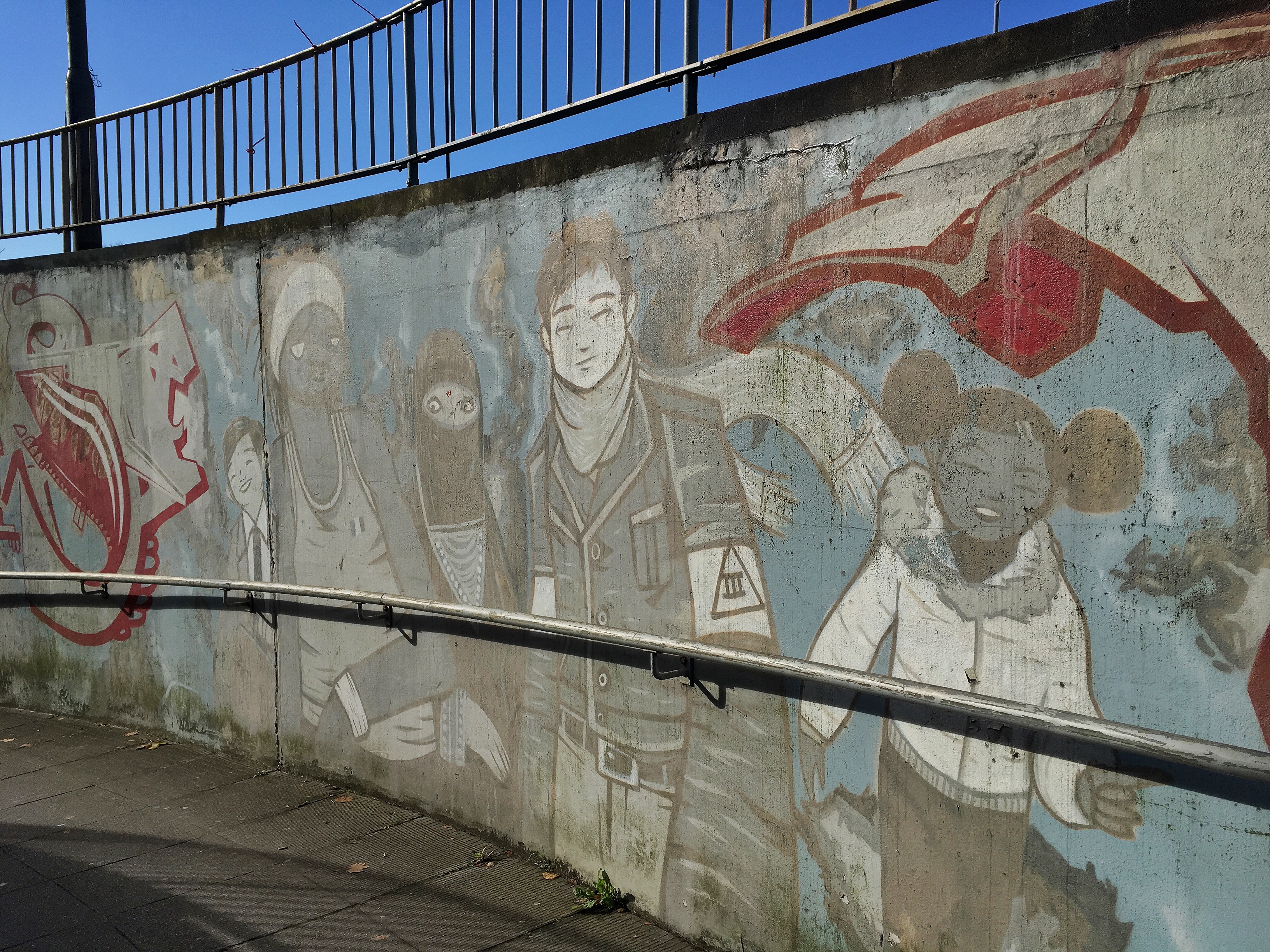 The paint may have faded and I’m not sure how long the pictures will remain but I’m glad I had the chance to see them again. It would be nice to think someone would arrange to have them repainted when all the work in the area is complete. 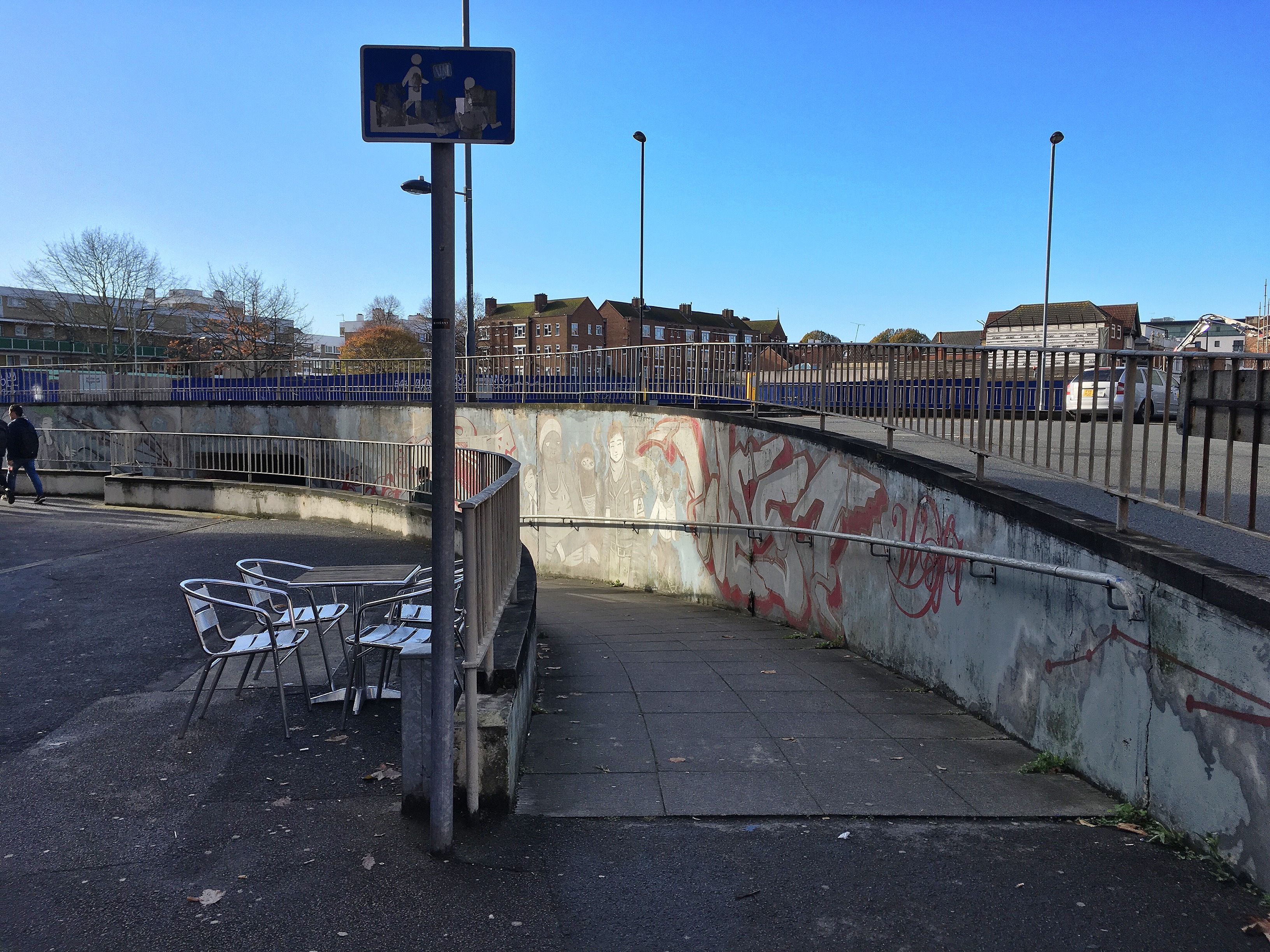 We left the underpass behind and walked towards St Mary’s Church talking about graffiti in the city. Not all graffiti is good, some might even consider it vandalism. Projects like the Beyond Graffiti Tunnel and these commissioned murals are a great way to brighten up otherwise dull areas though. Perhaps if we had more of the latter we’d have less of the former. 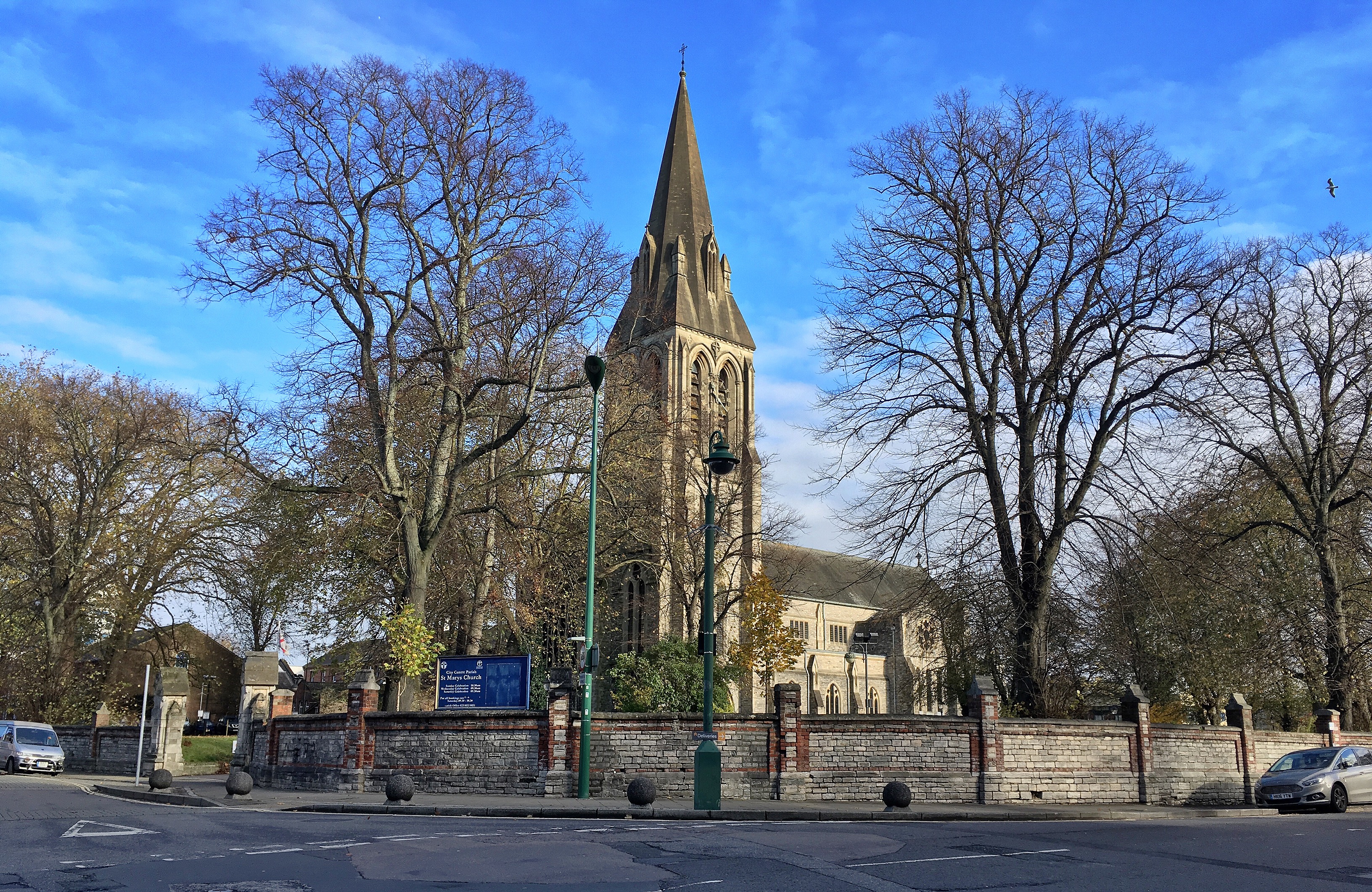 Opposite the church we made a quick detour through the old stone gateway, the reamins of the Chantry House wall. The house was home to priests and lay priests.  Stone from the original Saxon church was used to build the wall, or so they say. The Chantry house burned down in 1802 and was replaced by The Deanery but this too was demolished in 1959. 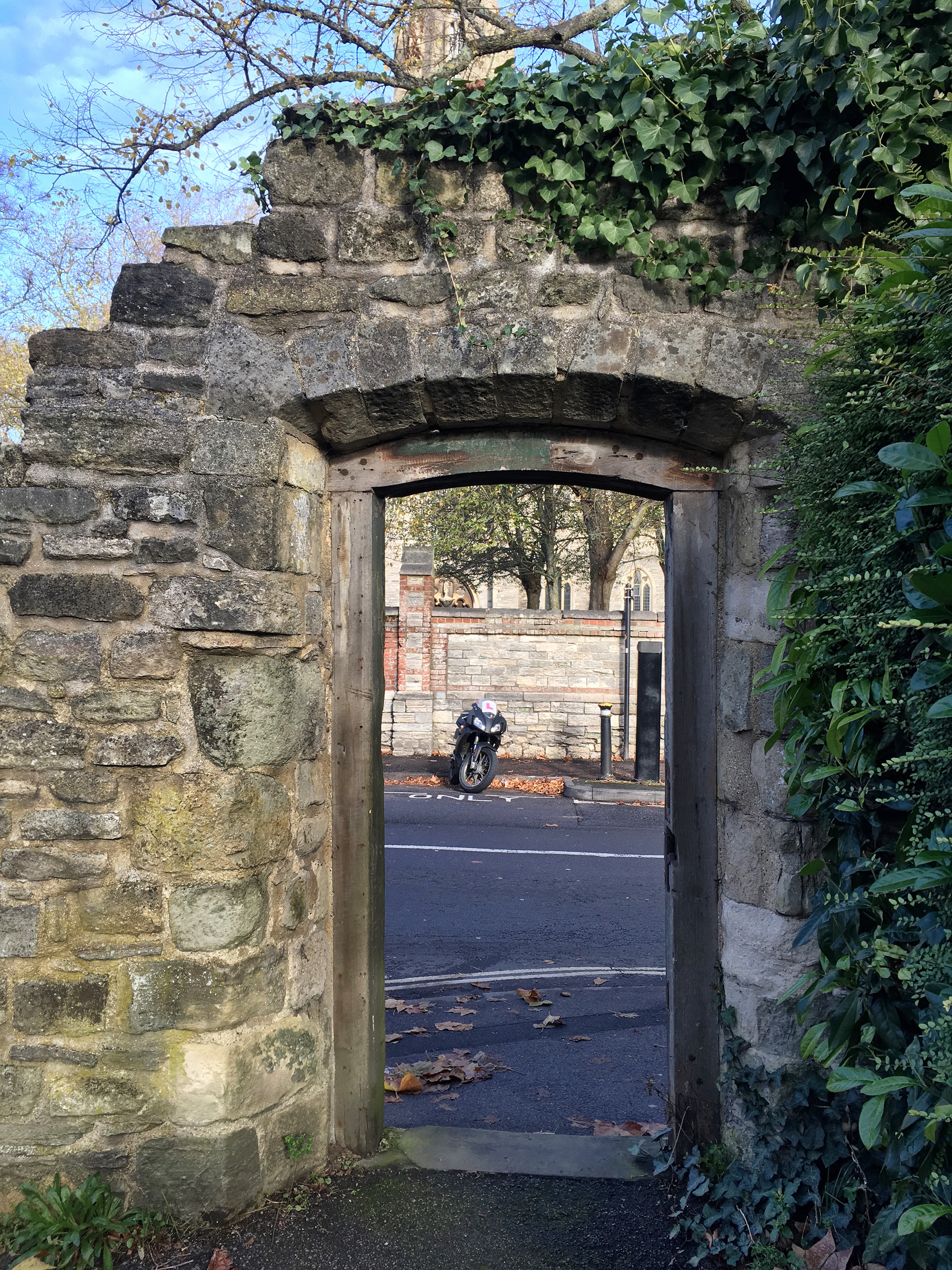 The Chantry Hall also once stood here atthe junction of St Mary’s Street and Chapel Road. Opened in 1925 it was a rather attractive buttery cream coloured building used by the community over the years for dancing, guides, scouts, clubs and even the Southampton Music Festival. During World War II, it was used as an army billet and meals were prepared and served to bombed out families. When the church itself was too damaged by bombing to be used, the hall even became the church for a while.

In the 1980’s the church decided to knock down the hall and build housing. A long battle to save it ensued. In 1988 it seemed the church had lost the battle and Chantry Hall was listed. This should have protected it from the developers but it didn’t.  In around 2007 I was asked to make a report on the area as my then boss was planning on starting a venture nearby. It all came to nothing but I took several photos of the hall as part of the report. Sadly, most have since been lost, as has the hall. A mysterious fire settled its fate by all but destroying it and it was finally demolished not long after. 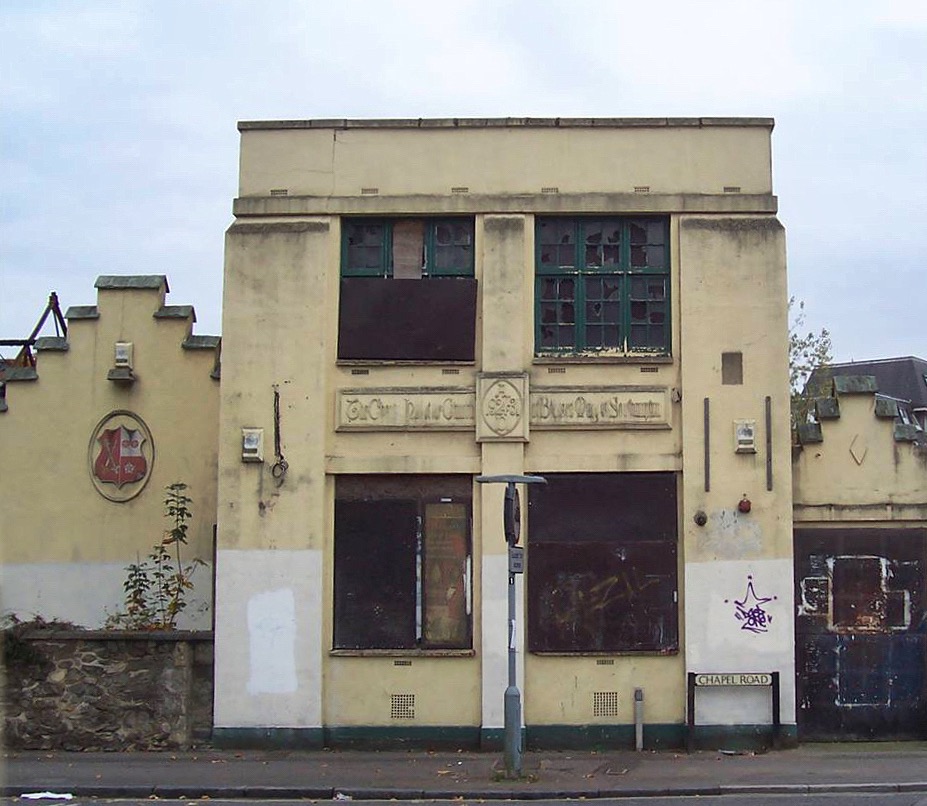 The medieval stone rubble wall once encircled the Deanery site and there are more remains of it on Marsh Lane, close to Chantry Bridge. Once there was a School here, the Deanery School,  built to educate children from the nearby workhouse and finally closed in 1989. The Deanery field was also behind the wall. This was where Southampton Football Club was born. These days it’s all housing and halls of residence for students. My plan was to try to find a way through from the gateway opposite the church to the opening near the bridge. I was convinced there must be one. Unfortunately, after much wandering around and coming upon dead ends, it seems the shortsighted builders didn’t leave one.

Today was obviously a day for plans coming to nothing and we ended up back in Chapel Road. The final plan of the day fared a little better. We made our way to the Itchen Bridge and climbed. As we reached the stop of the steps we peered over the side at Cross House and the boundary stone. A bank of cloud was heading towards us and I hoped it wouldn’t rain before we got across. 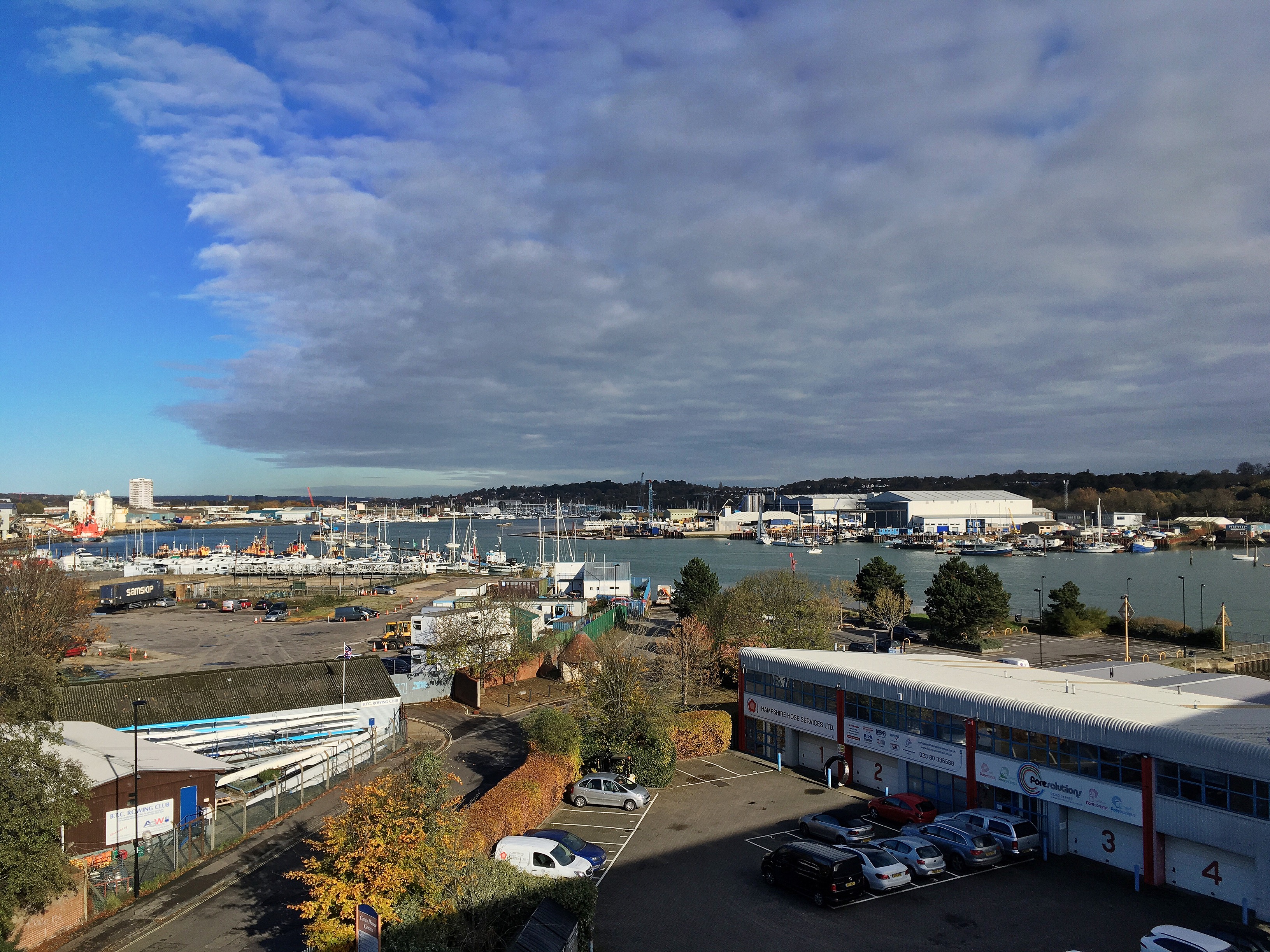 Despite my concerns about being caught on the bridge in the rain we stood for a while picking out landmarks like the football stadium, the Civic Centre clock tower and the spire of St Mary’s. The cloud crept ever closer, dividing the river in two. The water nearest to us was dark blue, reflecting the sky above, the rest was grey green, reflecting the cloud. 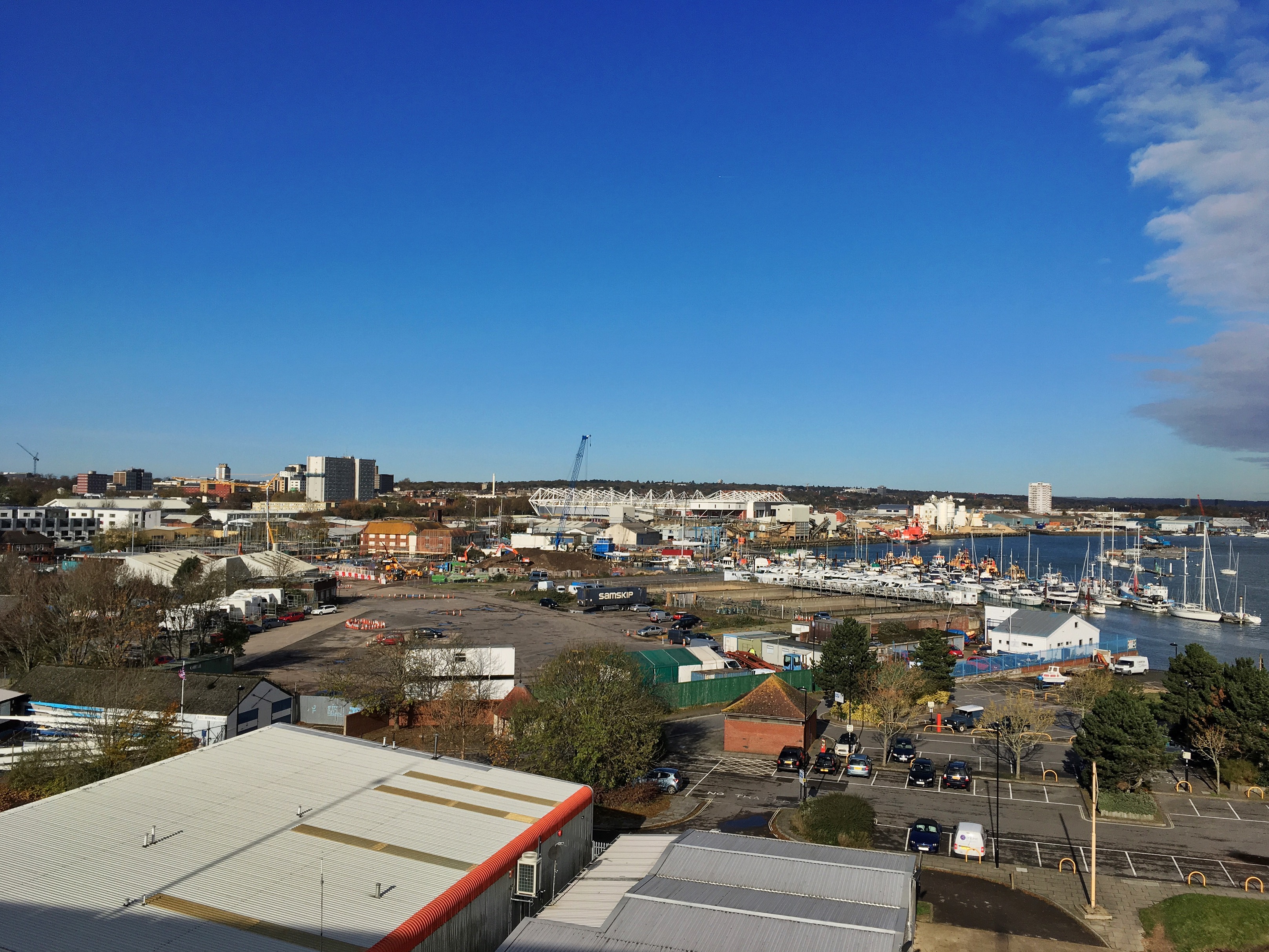 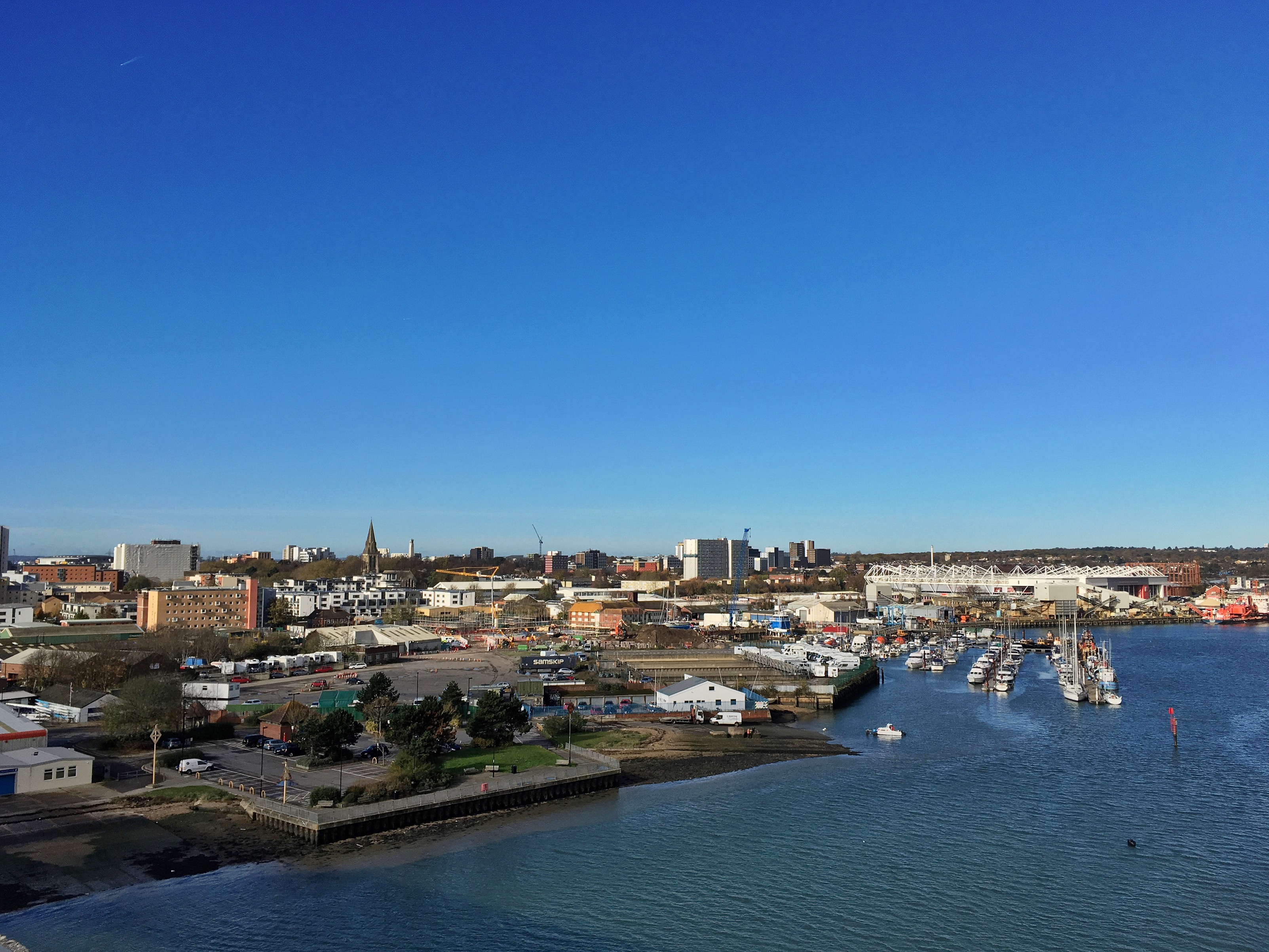 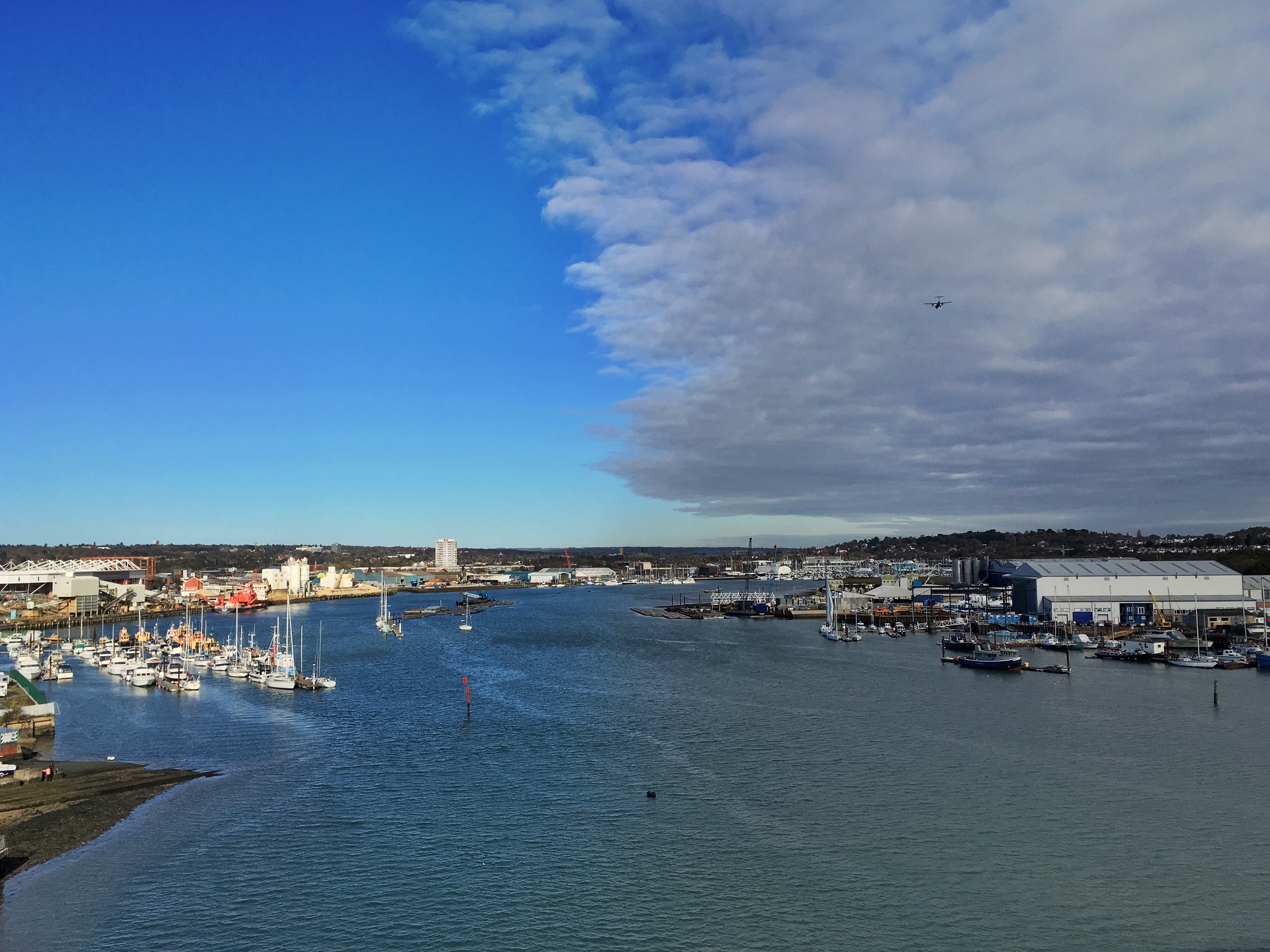 Near the apex of the bridge we came upon bunches of flowers taped to the rail. They looked as if they might once have been lovely but now they were dried up and withered. Perhaps they’d been put there in memory of someone who jumped? With such an amazing view it always surprises me that people choose this spot to take their lives but they do with monotonous regularity. 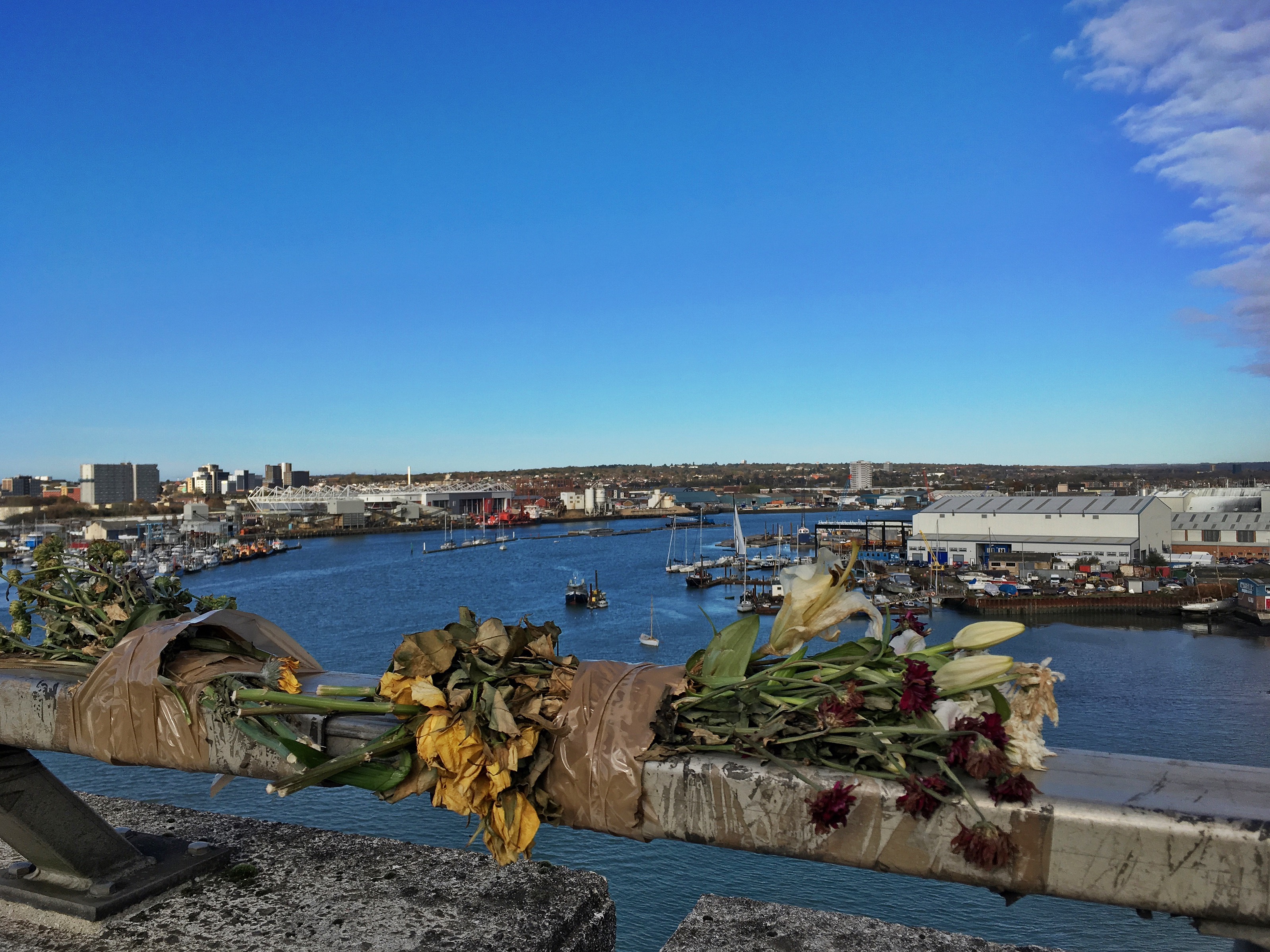 The rain never did fall and somwhere on our way to the green we left the cloud behind us. The last part of our walk took us across the green. As we crunched through the fallen leaves in the dappled shade a little robin serenaded us from the branch of a holly tree. We may not have had the walk we’d hoped for when we set out this morning but we’d made the best of the walk we had. Sometimes that’s the best you can hope for. 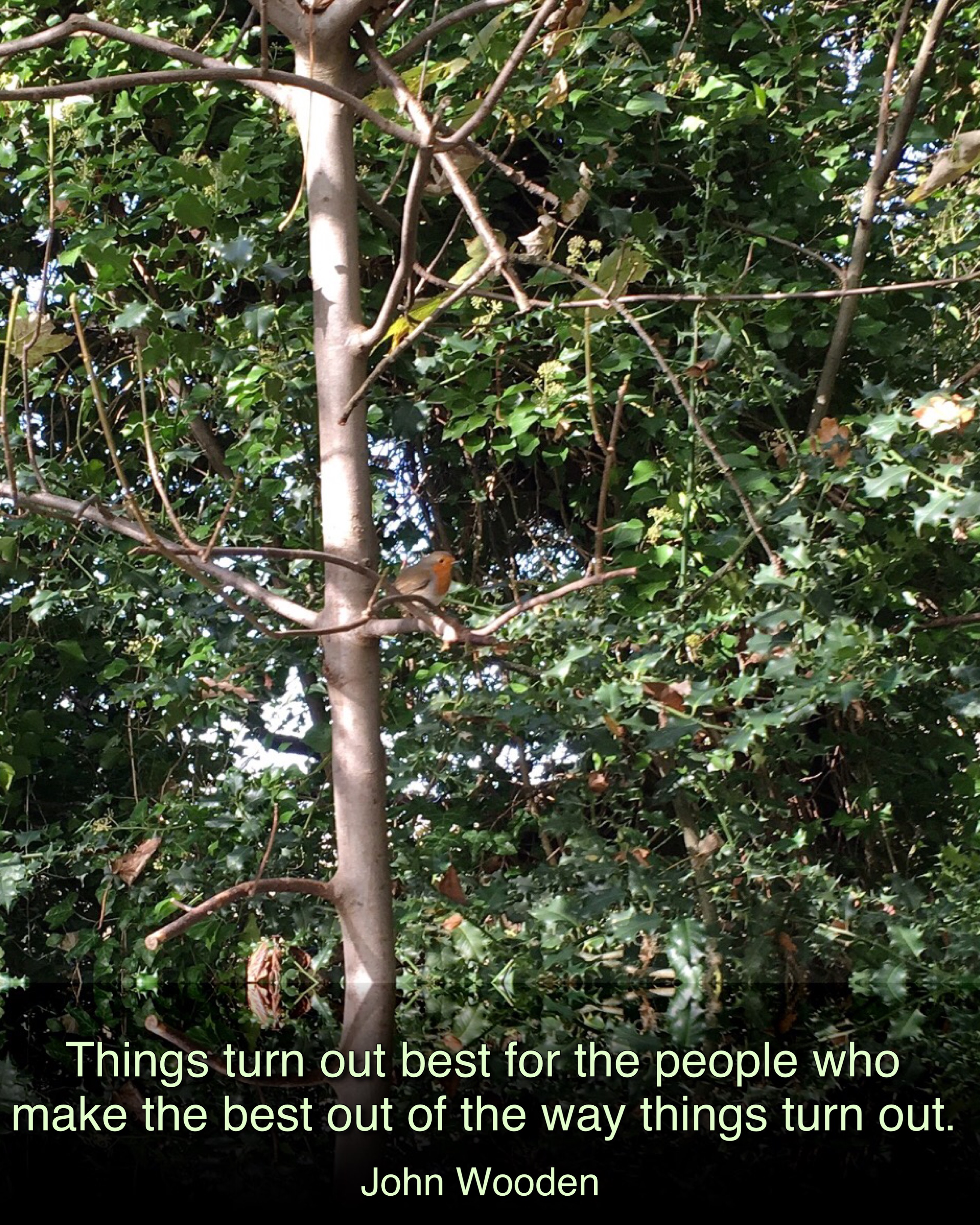 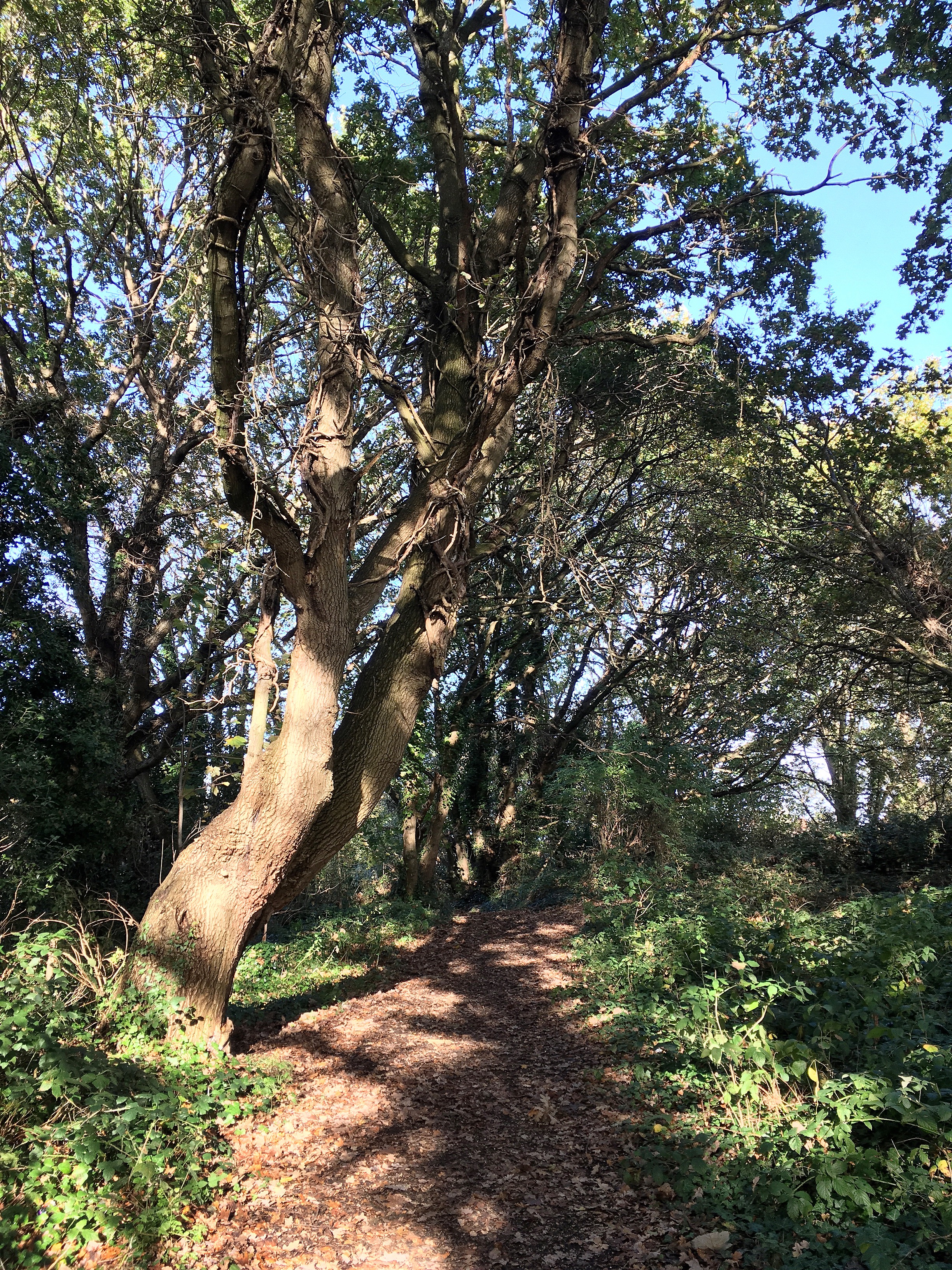 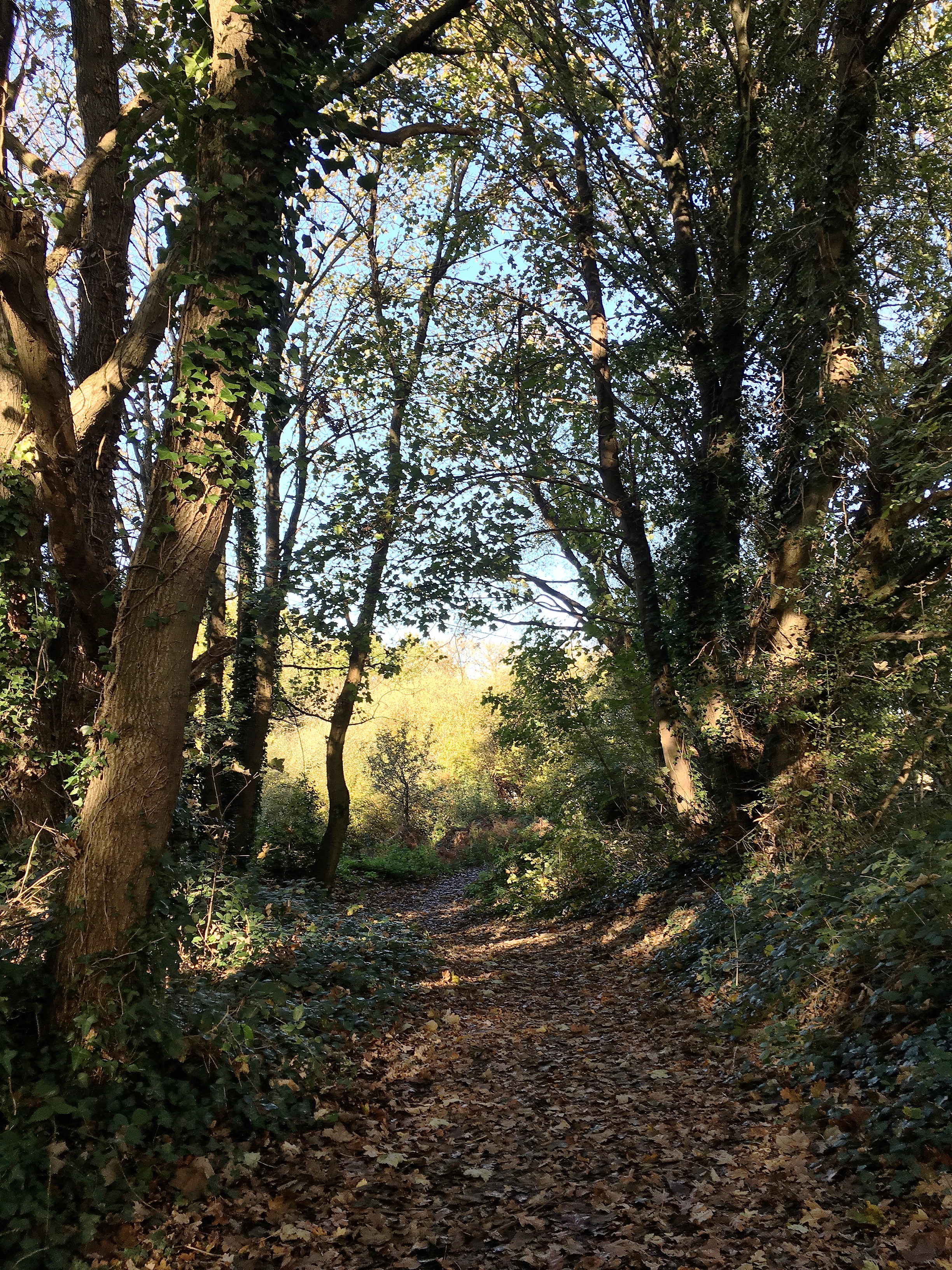 4 thoughts on “Underground, overground, making the best of things”