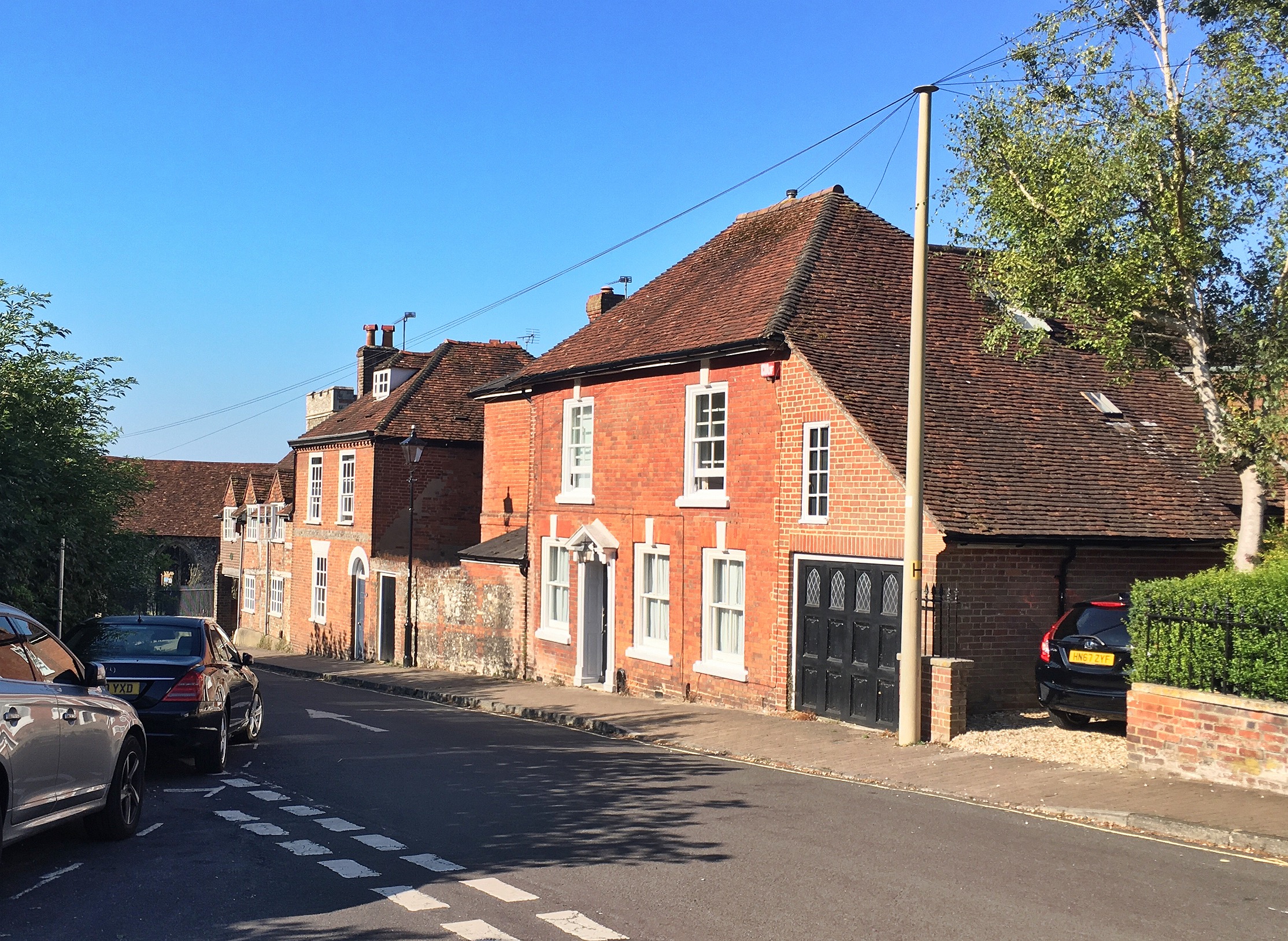 A quick look at the map made up my mind. The top part of Blue Ball Hill looked to be devoid of houses and I could see the square tower of a church a little way along St John’s Street. Old churches are almost impossible to resist and I could always walk back up and explore further afterwards. With this in mind I began to walk along St John’s Street. There were so many interesting looking houses, it was slow going and, as I walked, I realised I was gradually going downhill, slowly losing all the altitude I’d gained with so much effort earlier.

This part of Winchester, outside the old East Gate of the medieval City, is called The Soke. Originally it was a suburb just outside the city, administered by the Bishop rather than the city itself. St John’s Street follows an old Roman Road, which later became a drovers road. With all the drovers passing through and St Giles fair on the hill nearby, the pub and the area in general became very prosperous. Perhaps this is why so many of the beautiful old houses have survived. The church of St John the Baptist may well have added to this prosperity. It was used by the scholars of Winchester College before their chapel was built in 1385 and, no doubt, many of them also enjoyed a beer or two in the Blue Boar. St John’s is the oldest parish church in Winchester, dating from at least 1142, although it’s exact age is something of a mystery. The present building stands in the centre of a fourth century Romano British cemetery so parts of the building may even date from then! The square crennalated Tower, glimpsed between the rooftops, that had drawn me off my original course turned out to be the newest part of the building, added in the fifteenth century.

When I finally passed the last house and got a proper view of the church, I was pleased to see there was a small graveyard. This was too enticing to resist so, before I even looked at the church properly, I went through the gate to see if there were any interesting graves. Sadly, although there were several stones and one large tomb, the inscriptions were so worn I couldn’t make out any names. What I did find strange was the house next door to the church. It was obviously old and rather pretty with its half tiled upper story. The curious thing was the porch, running the whole length of the house and supported by brick pillars inset into the wall bordering the church. There were windows and a door under the porch and bright flower tubs on the wall but the view over the graveyard was not one even I would want to sit and look out on every day. It all felt a touch macabre. The curch door was closed, much to my dismay, but the path curved down and seemed to go around the side of the building. Perhaps I could walk right around the church and, if I was lucky, there might be another door on the other side? Disappointingly, this wasn’t to be. The path did look as if it led right round the church but, when I got to the bottom of the slope, I found a locked gate. There was nothing for it but to turn back and see if there was another way in. Back out on the street again it was clear the church had been squeezed into the available space and was not at all a conventional shape. The east wall actually abuts the pavement of  St John’s Street, following the curve of the road. It isn’t  parallel with the west wall and the whole edifice sits on a steep ridge overlooking the city. 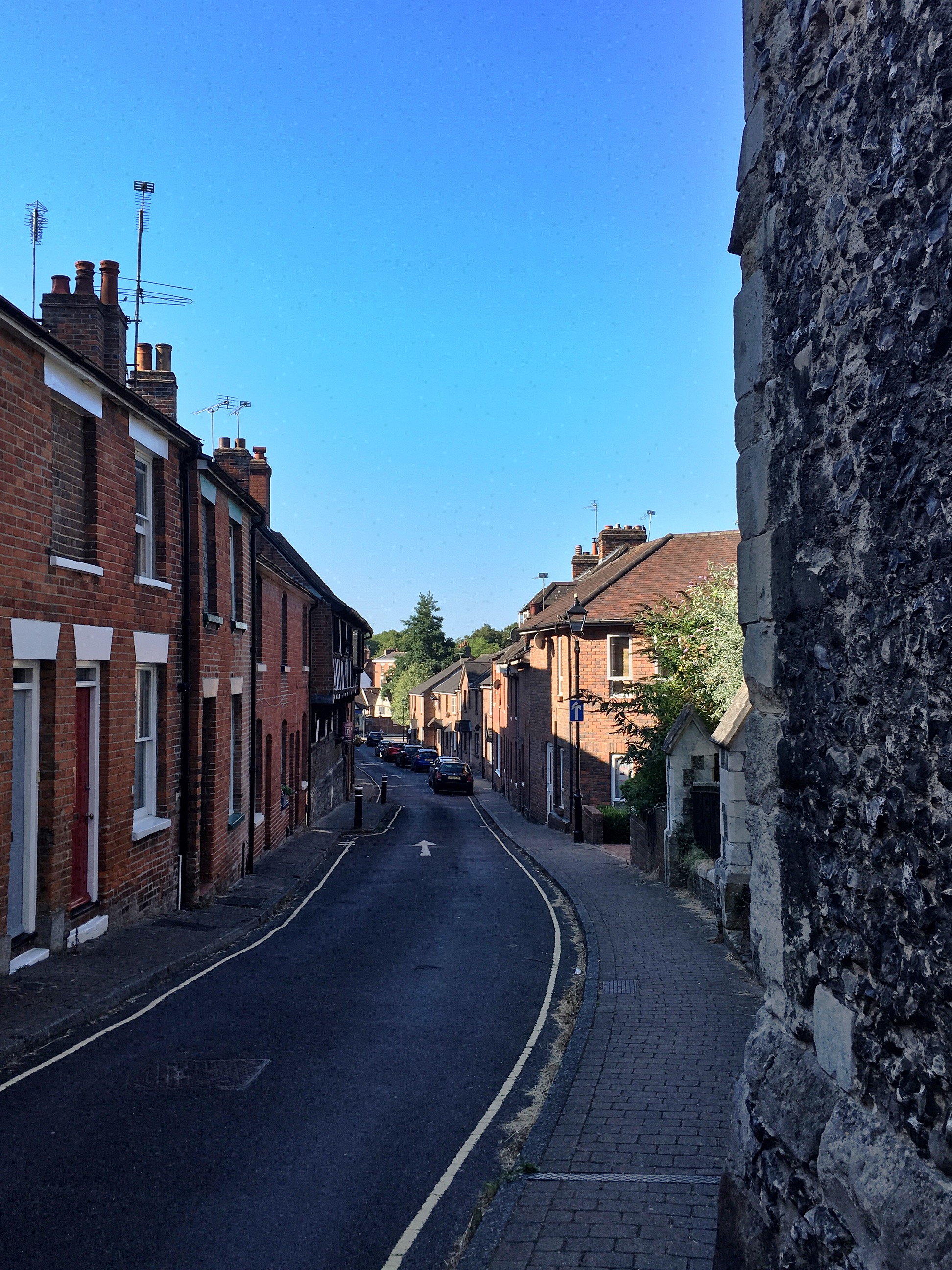 On the other side of the church was another, far grander gate, with stone pillars and an odd wrought iron arch. On one pillar there was a stone inscribed with a scallop shell and the words Pilgrims Way Winchester – Canterbury 2000. This commentates a modern pilgrimage but, for medieval pilgrims, this church was the first they visited on their long journey and the last on their return. There was also a sign telling me the church was open during the day but entrance was through the next gate. Obviously during the day did not include early on a Sunday morning. Perhaps they were preparing for the morning service? There were two doors on this, the south side, of the church and both were closed. One even had a kind of wrought iron gate across it for good measure. Whatever the sign said, it was obvious I wasn’t going to get inside today. This was a shame because there are, apparently, some beautiful wall paintings in the church dating from 1280. These were covered up in Victorian times but uncovered again in 1958. Although I didn’t know about them when I stood outside the church, I wish I’d had the chance to see them,

The door closest to the gate seemed a curious thing. It jutted out from the side of the building in a kind of outside chimney breast with a little slanted roof and a tiny window on one side. It seemed a very odd place for a door, especially with a much grander one so nearby. Later I discovered this was once the entrance to a rood loft, a kind of gallery running across the church between the chancel and the nave. Beneath this gallery was the rood screen, an ornate partition spanning the width of the church. The rood loft is no longer there so I suppose the door now leads nowhere. Disappointing as it was not to be able to go inside, the church, with its combination of stone, flint and brick walls, was a thing of beauty. Slowly I walked around it, admiring the different textures. When I reached the north west corner of the building I discovered a narrow passageway with steps leading down between the church and the houses below it. For a moment or two I dithered, not sure where it led or if I should explore it. In the end I couldn’t resist. The strangely claustrophobic passage took me behind the church and out between the houses on Chester Street below. For my troubles I got a view of the back of the church and learned there really was no way to walk right around it. Another cutway took me back onto Water Lane almost where I’d started. Still feeling curious about the very top of Blue Ball Hill but not especially keen to climb it from the bottom a second time, I decided to approach it from a different angle. More or less on a whim, I turned back towards the Weirs, then left on Bridge Street past the Chesil Rectory to the bottom end of St John’s Street. From here I could see the church again, jutting out at the bend of the steep, narrow street. It would be easy enough to walk back up to it and, from there, retrace my steps to the top of Blue Ball Hill. The problem with retracing steps is that you just see the same old things from a different angle. While this can sometimes prove interesting, I prefer to take the untried path when I can. In this instance, I was pretty sure there was another way to the top of the hill. When I’d looked at the map earlier I’d noticed that Blue Ball Hill ended where it joined the Alresford Road and there was another road running parallel to St John’s Street from the top of the hill down to Bridge Street. So I walked past the end of St John’s Street and followed the curve of Bridge Street to the bottom of Magdalen Hill.

The climb didn’t seem as steep as Blue Ball Hill but it was far longer and steep enough. As I plodded my way up I wondered if I’d made the right descision. There didn’t seem to be many houses to look at, although there were some intriguing steps leading up into the trees on the opposite side of the road. Briefly, I considered walking up them to see where they’d take me but common sense told me this was probably a bad idea, at least for today. As I passed the steps I made a mental note to explore them further another day. So I carried on trudging up the hill, past some large, but not particularly interesting houses. Now I had an ancinet looking flint and brick wall to my left and a steep, tree covered hill to my right. Over the wall I could see the roofs of the houses on St John’s Street and the tower of the church. Without all the buildings in the way the view across Winchester would have been stunning. The wall ended at a flint and brick cottage with a tall chimney. It’s door opened onto the street and it looked careworn, almost derelict. Just beyond it was a red gate leading into a park. From the map I could see I was almost at the top of Magdalen Hill where it joins with the Alresford Road and Blue Ball Hill. There was nothing to be gained from more climbing apart from a view of more trees but the park looked too intriguing to pass by so I went through the gate. It wasn’t a large park, just grass, a circular path and a few scattered trees. It was well worth the detour though because of the stunning views. Over the roofs of the houses I could see Winchester spread out below me.

Slowly I wandered along the path spotting landmarks. Winchester Cathedral and the tower of the Guildhall stood out and other spires, perhaps St Thomas’ on Southgate Street and another I couldn’t place. I thought I caught a glimpse of St Cross Hospital but it was hard to get my bearings and I may have been mistaken. Whatever I was looking at, this view was more than worth the climb and I was glad I’d chosen to discover more about Blue Ball Hill. 8 thoughts on “The Soke and the oldest church in Winchester”