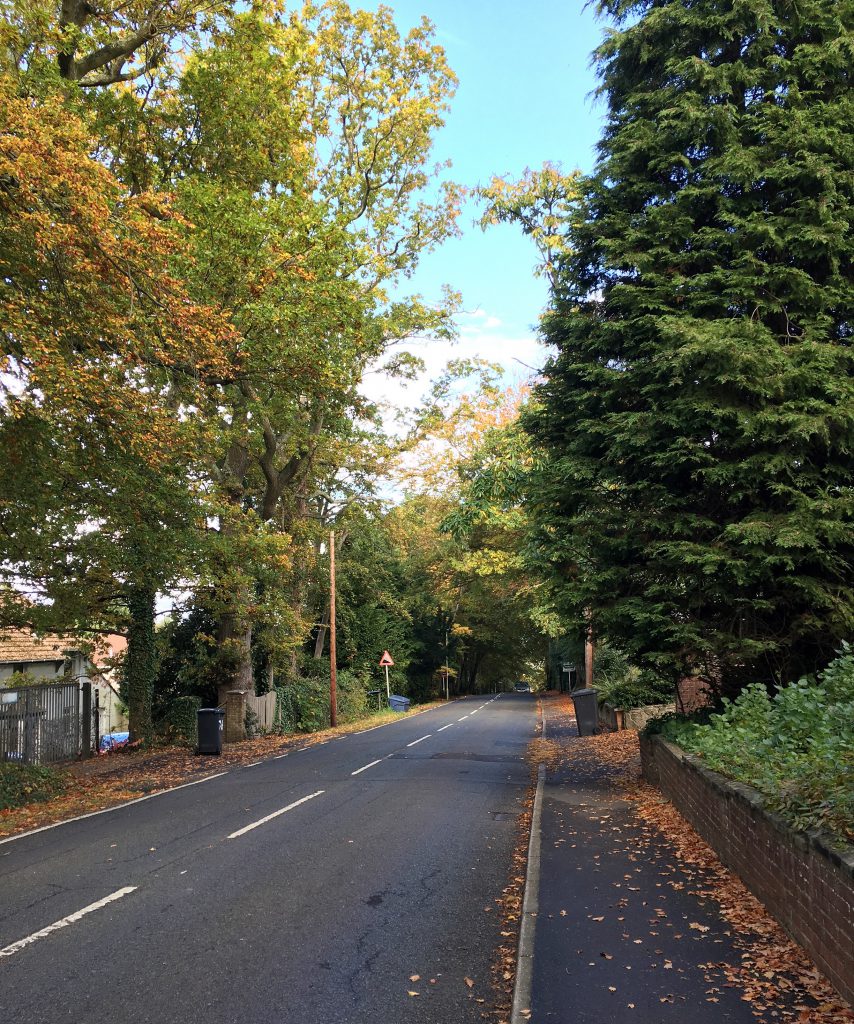 After our adventures at Exbury Gardens I thought today would be a good day to see how the trees were doing locally. Autumn has been slow to start this year but the colour does seem to be creeping in (or out as the case may be) very slowly so the avenue of limes at Hatch Grange seemed as if it might be worth a look. Of course CJ, who missed out on Exbury and has never been to Hatch Grange, said he’d come along too.

The verdant trees along West End Road made me wonder if our search for autumn colour was going to end in disappointment. Then, as we turned onto Chalk Hill, there was lemon, lime and a touch of copper amongst the green and the pavements were lined with satisfyingly kickable piles of fallen leaves. Quite why some trees have decided to put on their autumn clothes while others are still dressed for summer is a mystery but the sky was blue overhead and the sun was shining so, whatever happened, we’d have a nice walk. 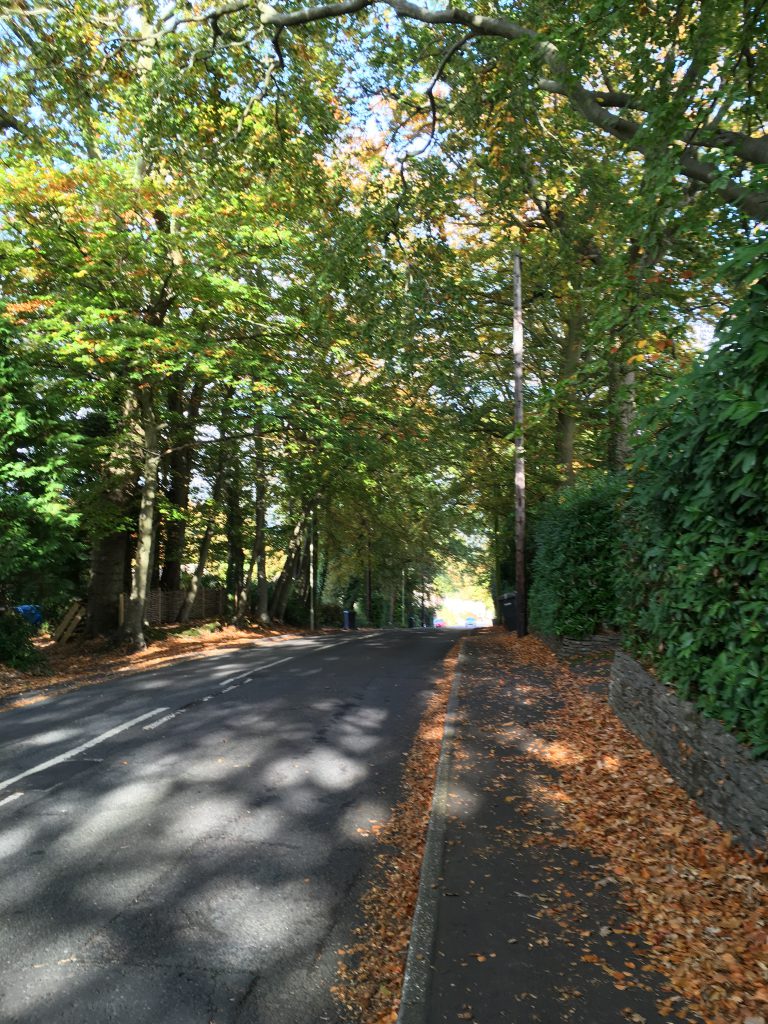 At the entrance to Hatch Grange there was a lot of green and not much gold, which didn’t bode well. With a sinking feeling I began to walk towards the lime avenue, then I realised CJ wasn’t beside me. He’d stopped to look at the plaque on the gatepost.
“It’s nice that they put this up,” he mused as I went back to join him. “It sounds as if, without Harry Haines, this land would probably have had houses built on it by now and have been lost forever.”
“Ironically, he came from a family of builders,” I told him. “His father Henry and uncle Daniel started a building business and Harry himself was a carpenter by trade. Later he took over the business and, by all accounts, Haines houses were well built. The school beside West End Burial Ground was one of his.”
“It’s odd he didn’t see this as prime building land then.”
“I guess it is, but he was quite a philanthropist from what I’ve read. He was a parish councillor for over forty years and a well known Methodist. He was keen on improving the village with things like electric lighting, so I guess he felt saving a lovely open space like this for the villagers was better than making a profit by building on it.” 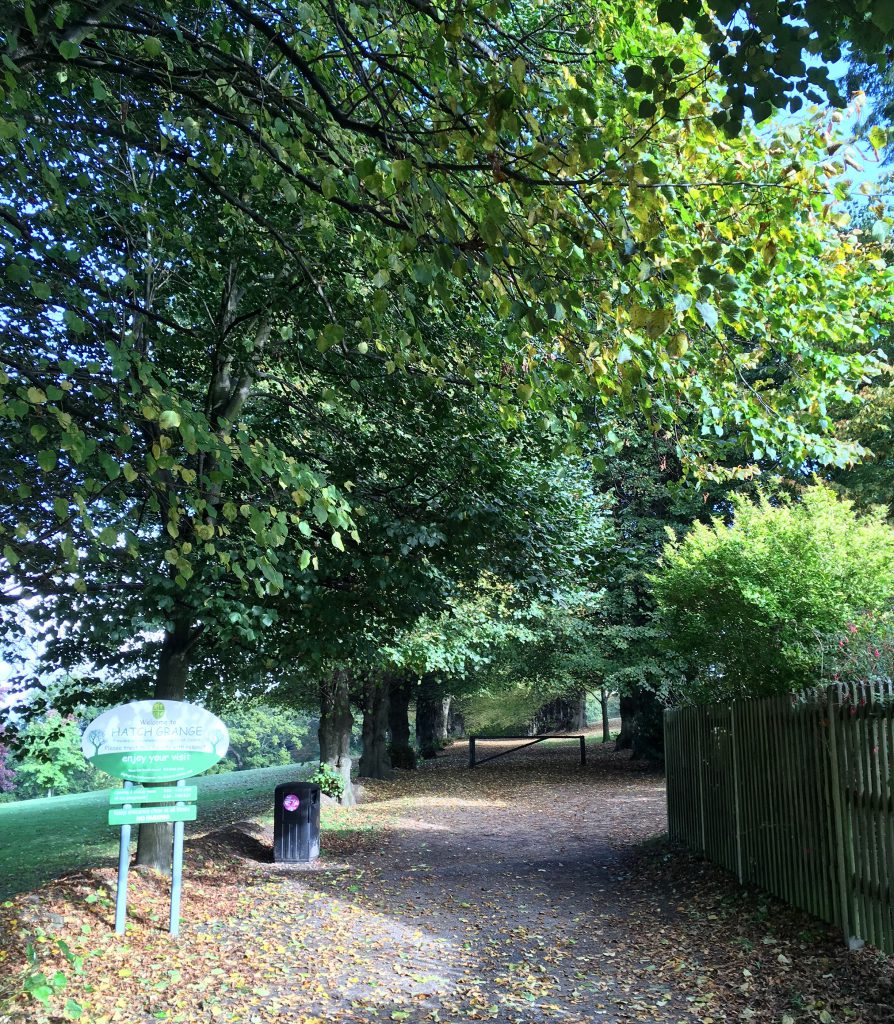 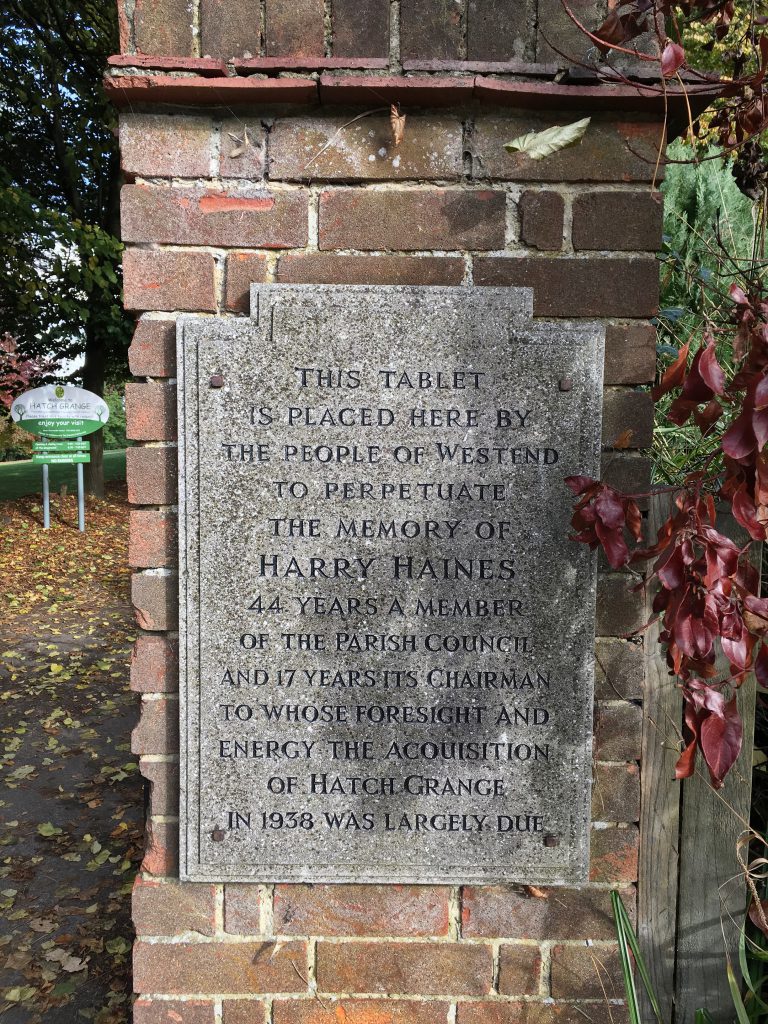 “So what was here before the Parish Council bought it then?” CJ asked as we finally walked through the gate towards the lime avenue.
“Originally, back in the fourteenth century, it was a large estate owned by John de Hache, hence the name Hatch Grange. Then, in 1863, the Gater family, who owned the mill, created a three hundred acre estate here and called it Hatch Grange.”
“So there was a house here then?”
“There was,  but I don’t think there are any remains to be seen. At least I’ve never seen any.  After the Gater’s created the estate Wareford Fletcher bought the house and land. He was the one who planted this avenue of limes to celebrate Queen Victoria’s Diamond Jubilee. By the time the council bought the land the house was derelict and it burnt down shortly afterwards.”
“Was it the same house that John de Hache lived in?”
“I’m not sure but, if it was, it’s a shame it was lost. The limes are lovely though and I imagine they once formed the drive to the house. In the spring, when they’re in flower the smell is wonderful.”
The limes really were beautiful, even if they weren’t quite as bright as I’d hoped. Some leaves were still holding on to their green but most had turned to shades of yellow and the ground beneath them was speckled with amber and butter. As we walked leaves fluttered down around us in gentle showers of gold and green. 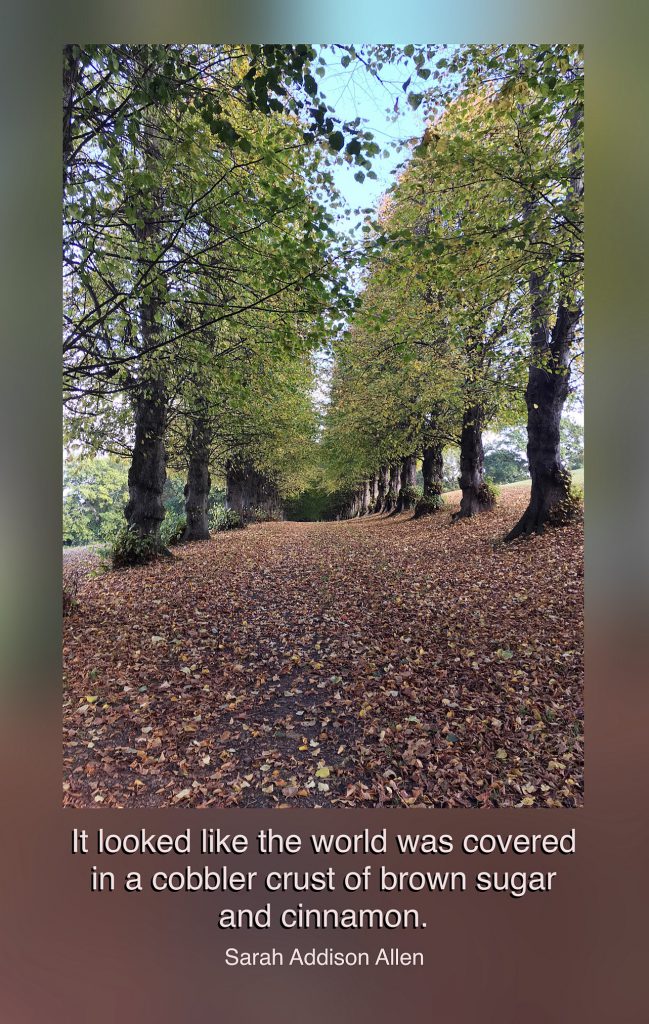 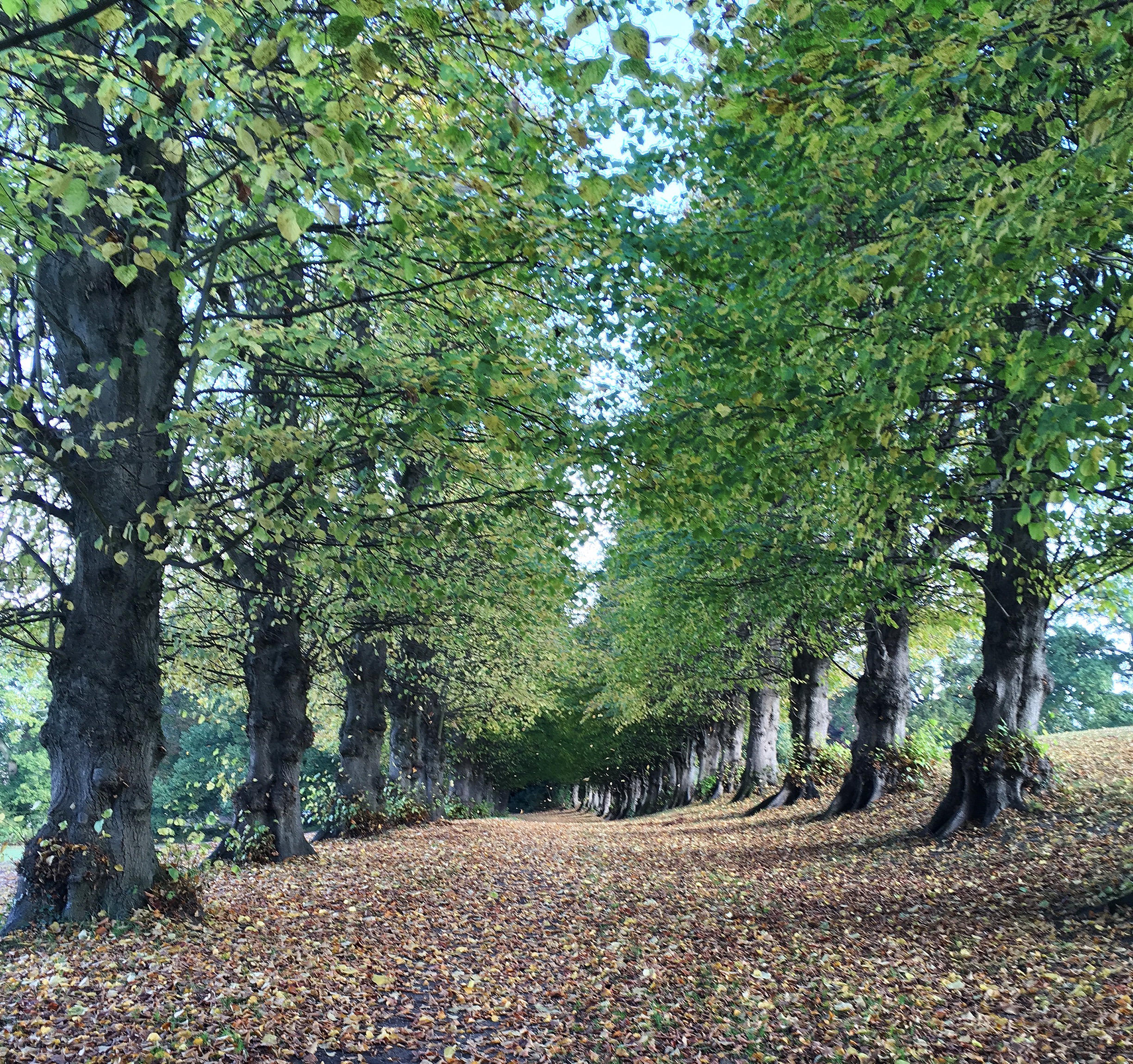 About half way along the avenue there’s a bench between a gap in the trees. We stopped there to drink the cartons of iced coffee we’d bought in the village when we set out and to drink in the views. On this side of the park there’s a liquidambar tree that’s breathtaking in autumn when the maple shaped leaves turn to shades of deepest red and russet. These trees are North American natives, which could explain why the autumn colours on that side of the pond are so stunning. The name doesn’t come from the colour of the leaves though, but from a sweet smelling gum the tree exudes. Apparently, it looks like liquid amber. 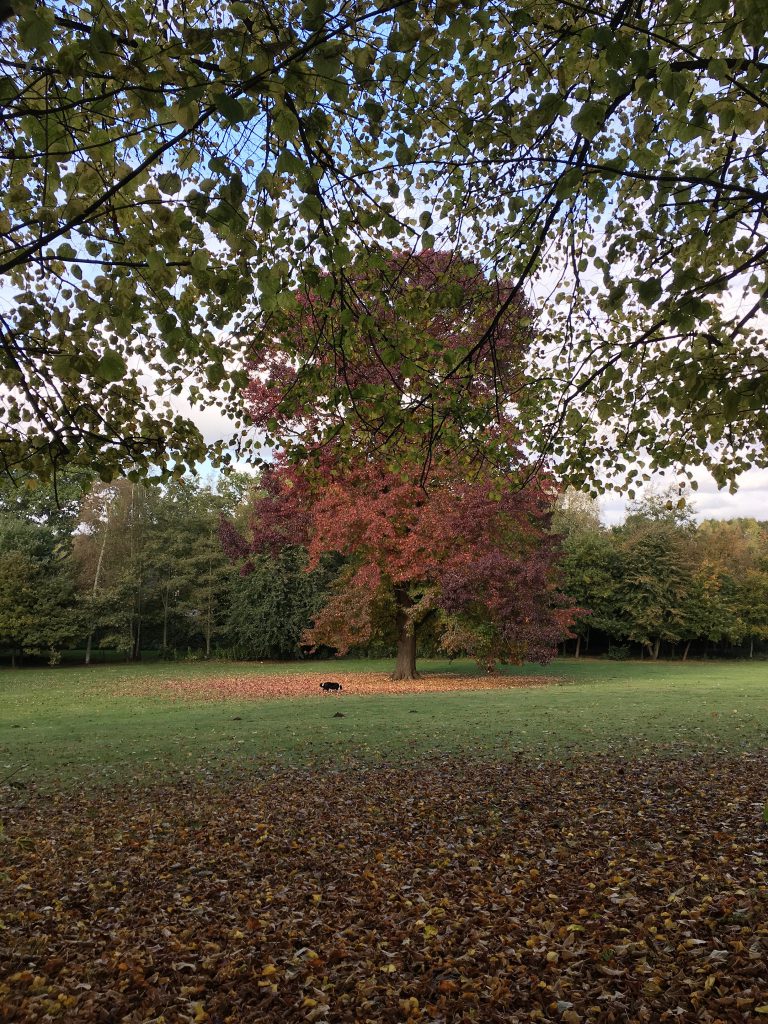 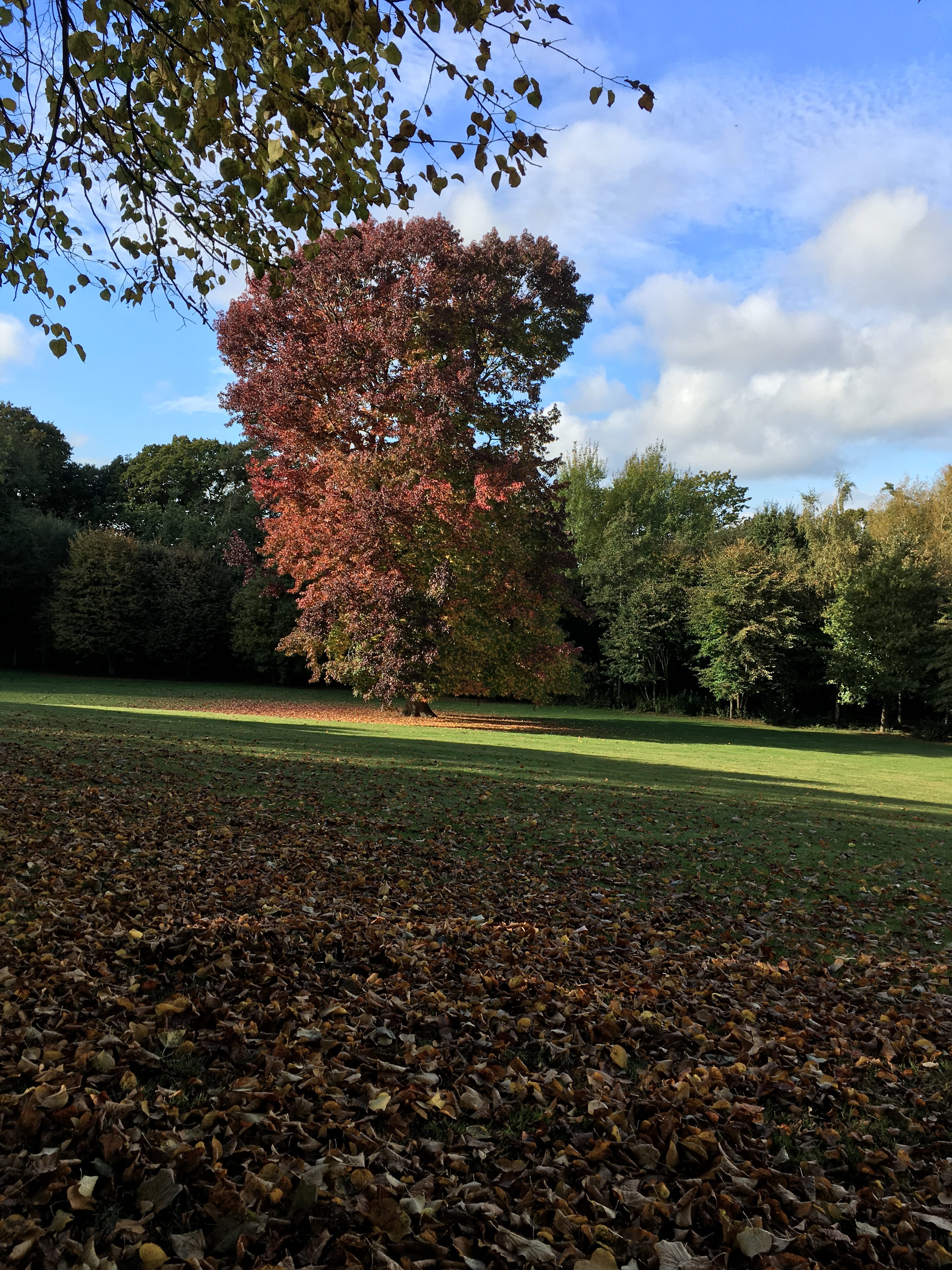 When it came to seasonal colour, the other trees along the edge of the park were undecided. Some were completely green while others had taken on rich, autumn hues. Once we’d finished our drinks we decided to head for them. Last time I came this way I discovered a pathway leading to a meadow. It turned out part of the land was due to be built on, which seemed like a terrible shame. before it disappeared I thought I’d show it to CJ. 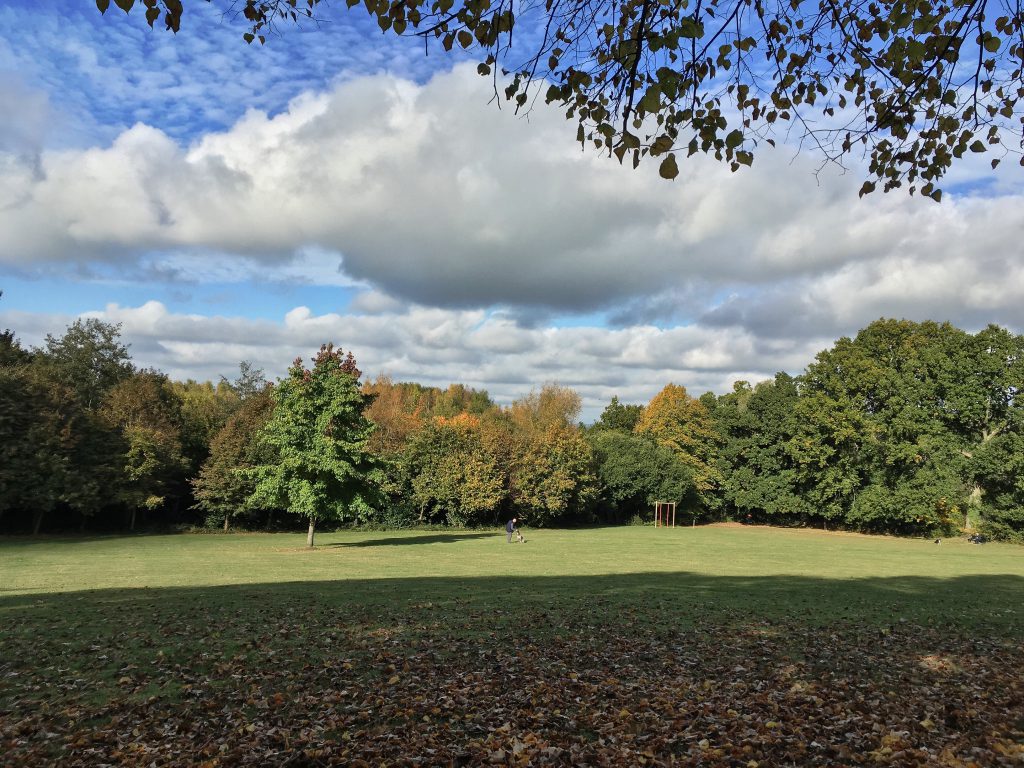 The path to the bridge over the little stream was truly paved with gold and the dark, mossy ground under the trees was speckled with fallen leaves. We stopped for a moment on the bridge to appreciate the light coming through the leaves and the contrast of dark twisted trunks and branches. 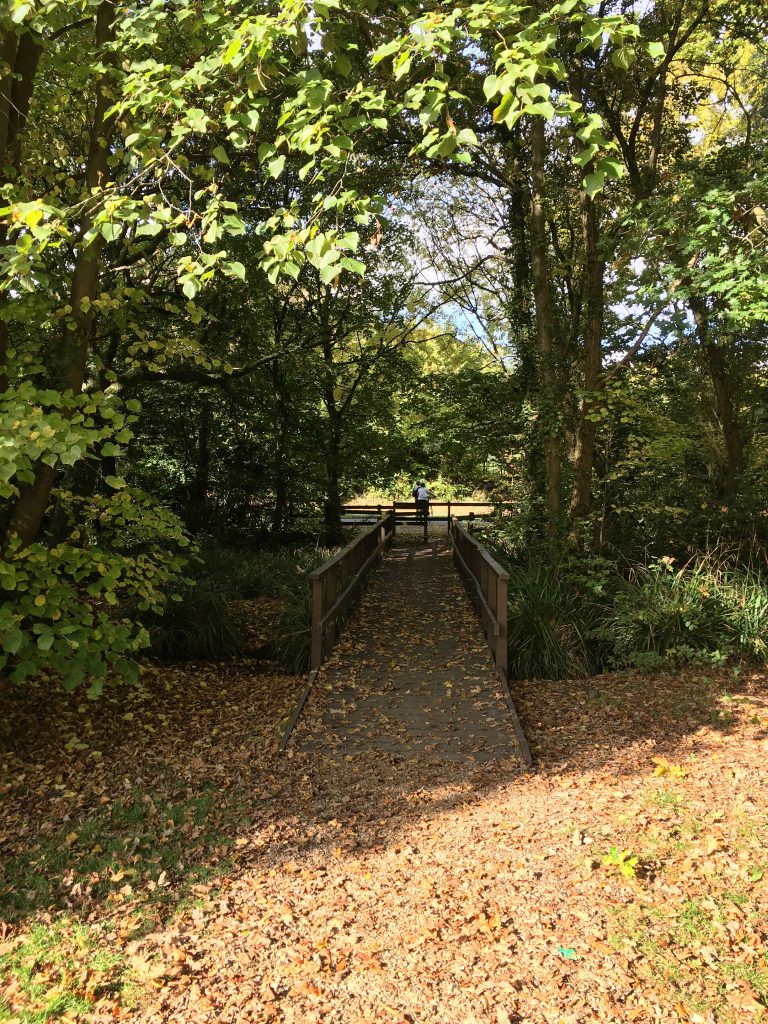 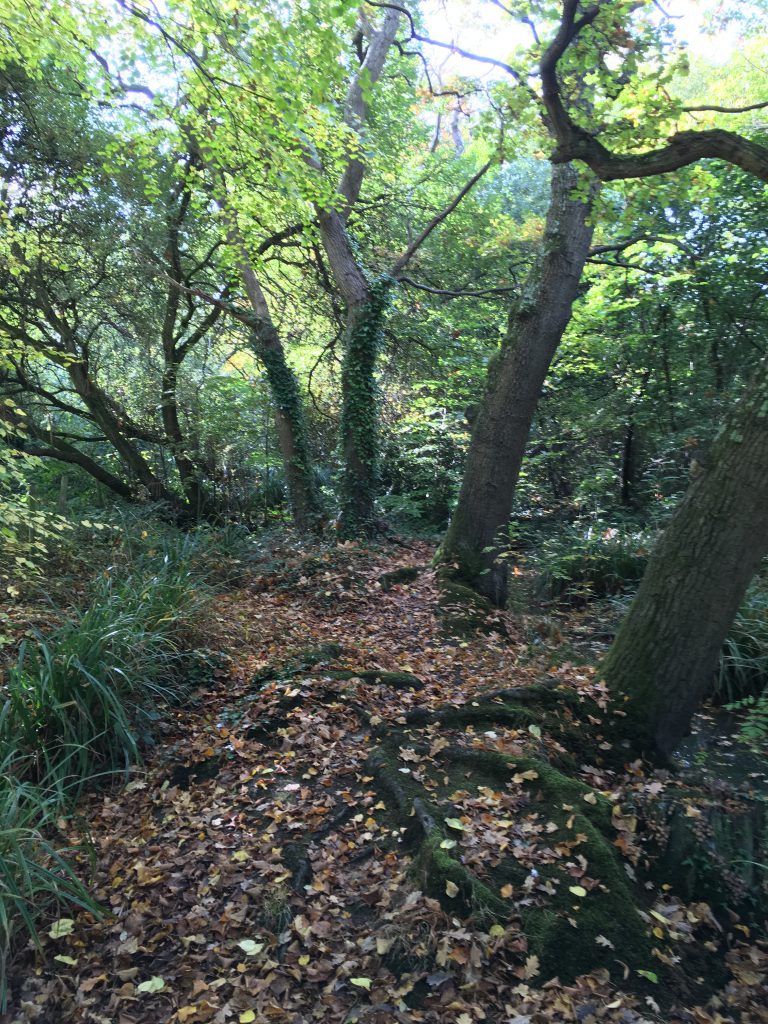 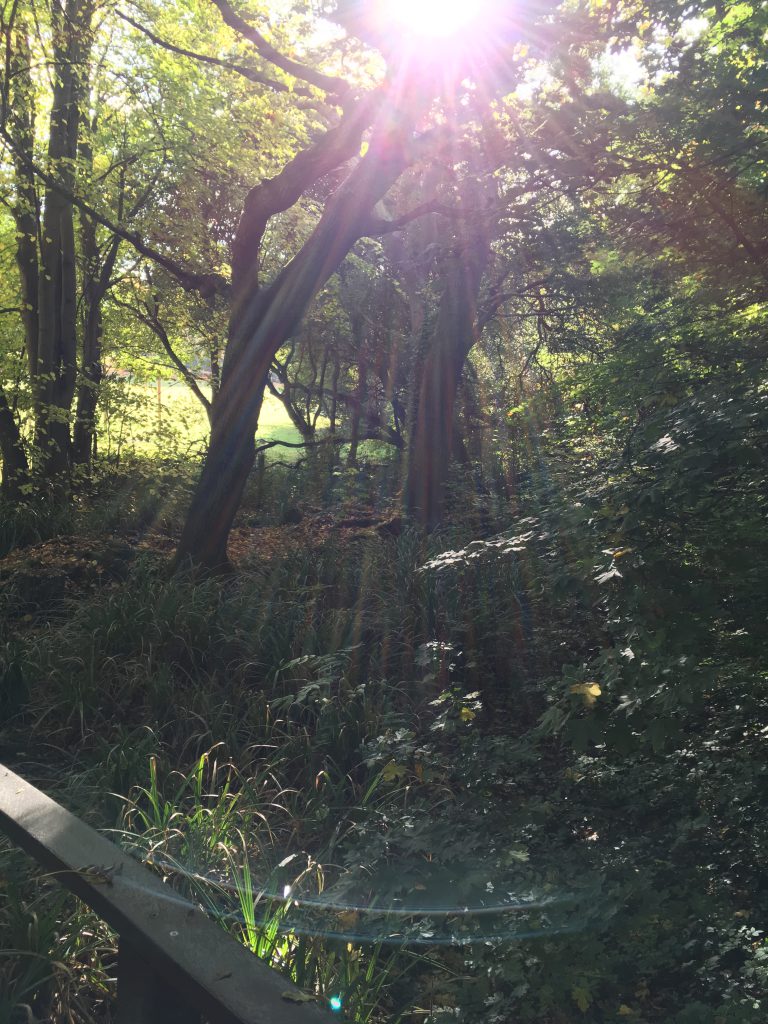 Across the road and through the kissing gate the hill was as steep as I remembered. Of course, I hadn’t mentioned it to CJ and he grumbled a little as we puffed our way to the top. When we got there though, he had to admit it was well worth the climb. The views in every direction were spectacular. We could see the airport in the distance, cottages and trees in all shades.
“When I was here last this meadow was filled with butterflies and flowers,” I told CJ.
“I wonder if it will still be here next spring?” he replied.
“Not if the developers have their way. From what I’ve seen of the plans, about two thirds of this will be houses.” 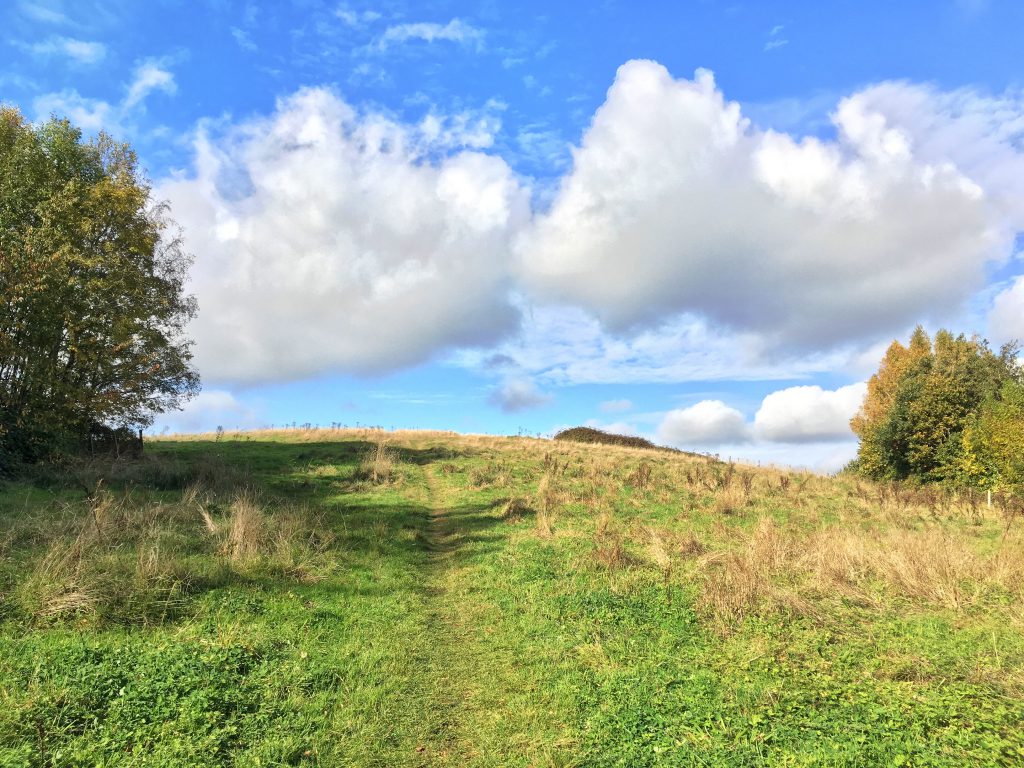 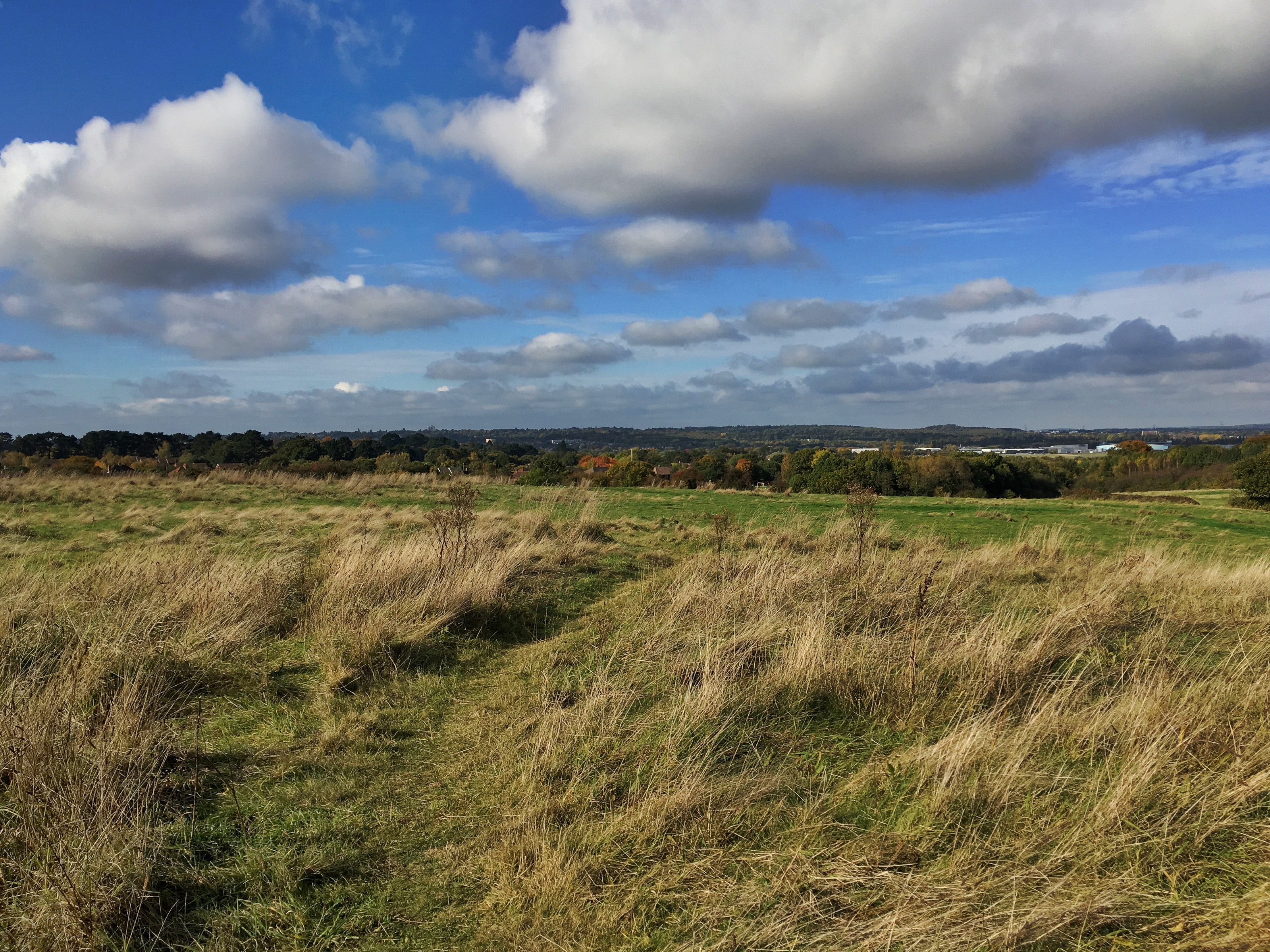 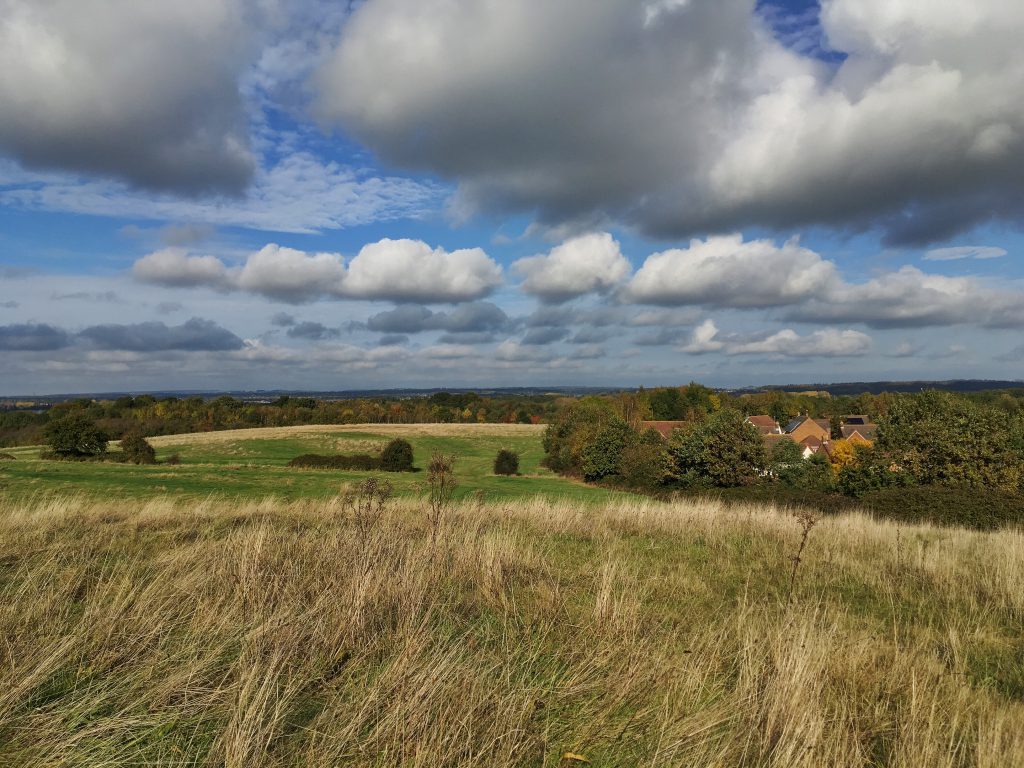 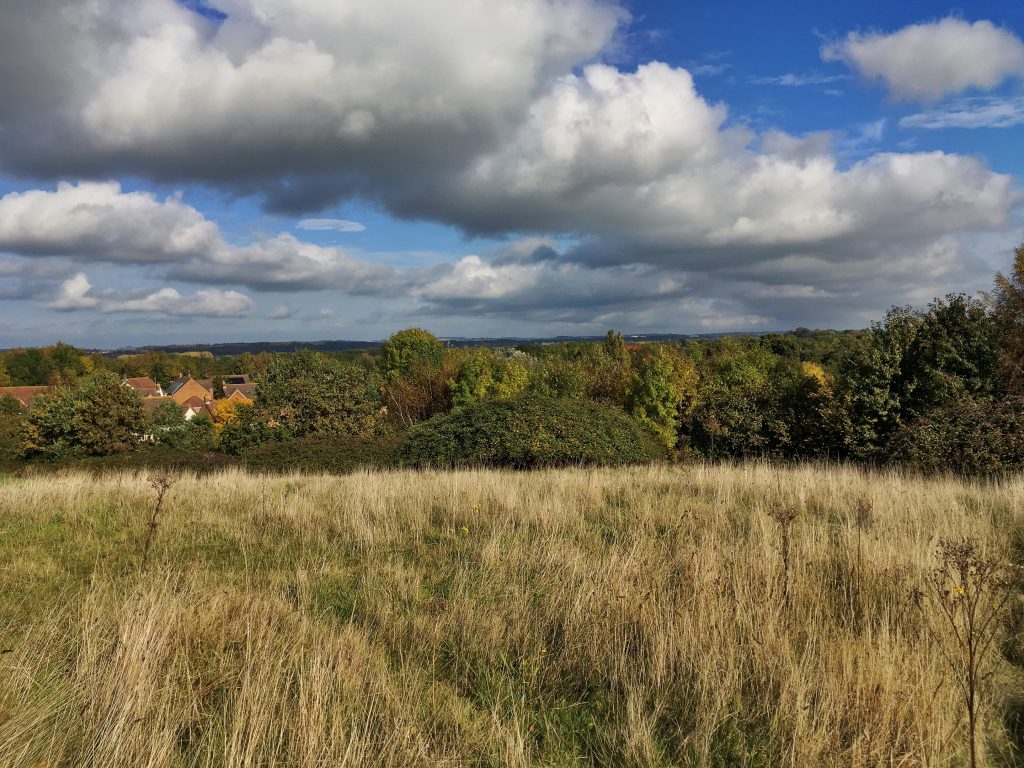 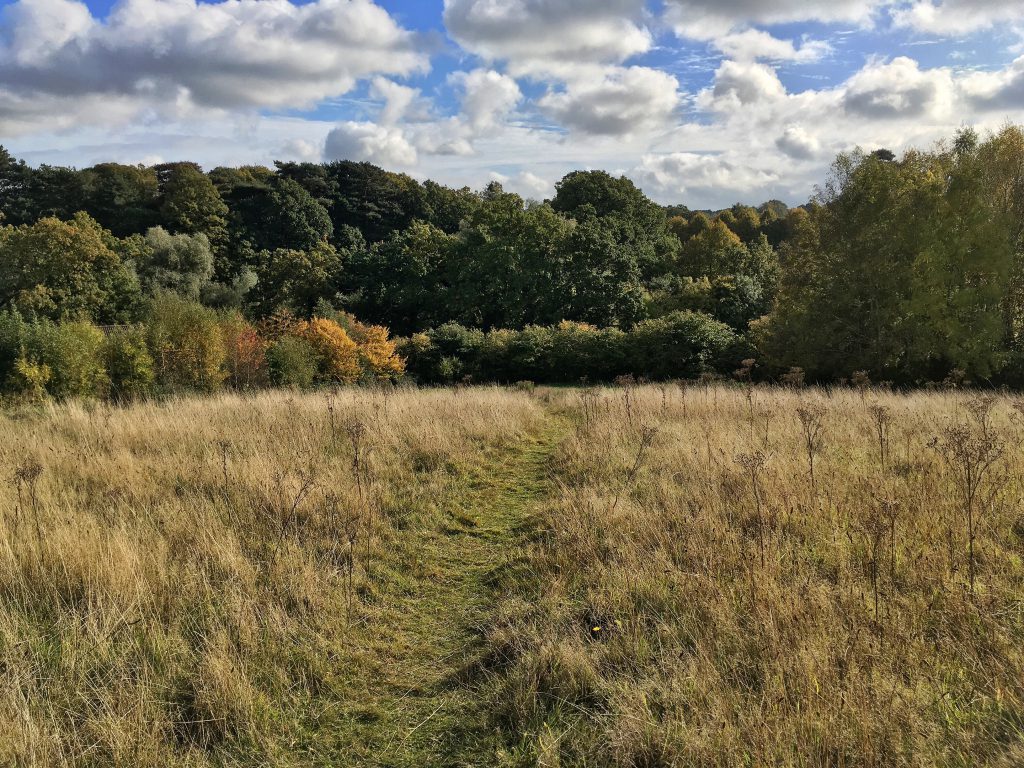 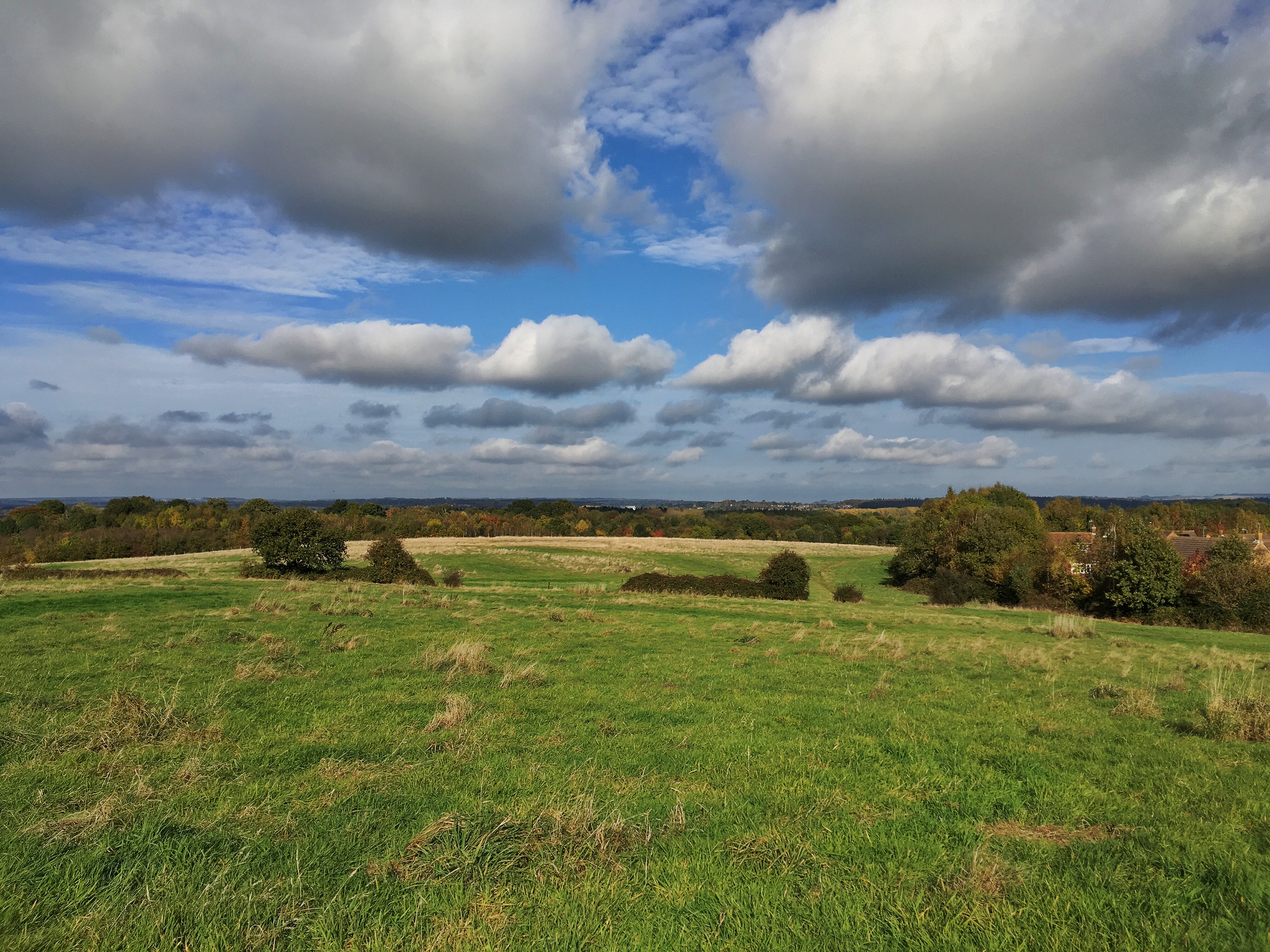 Slowly we decended the other side of the hill and, after a few minutes of feeling lost, I eventually found the gate to the footpath that would take us back to the road. Last time I’d found a sign here telling me the footpath was going to be closed when the new houses were built. Thankfully it was still open, if a little overgrown in places. 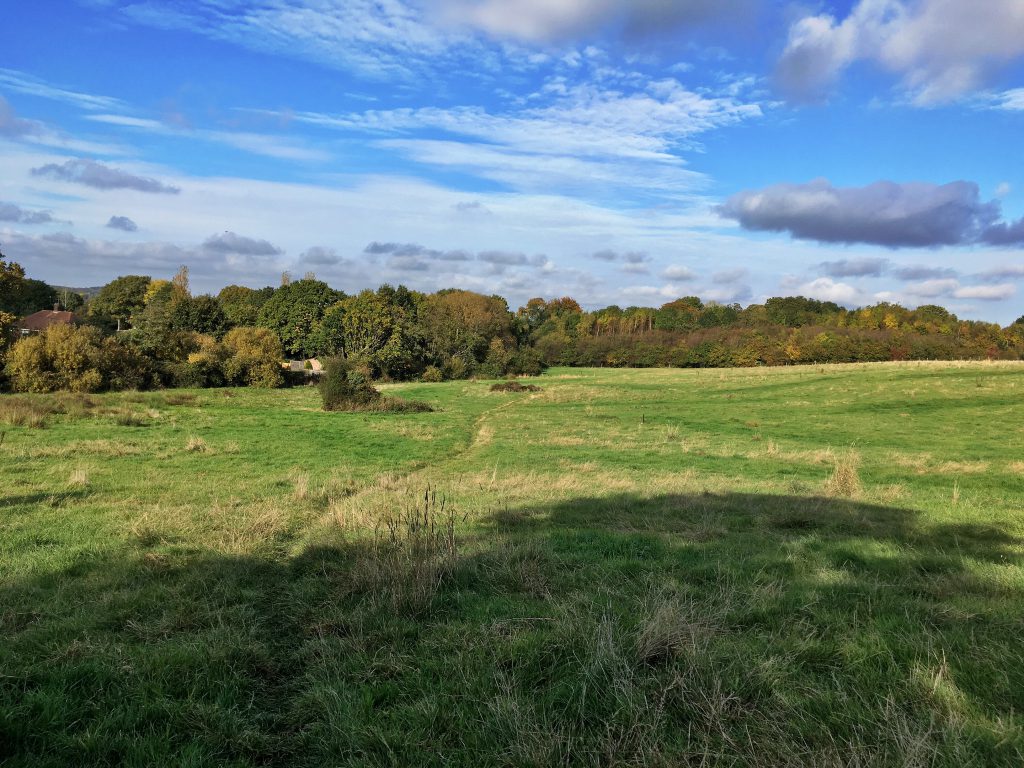 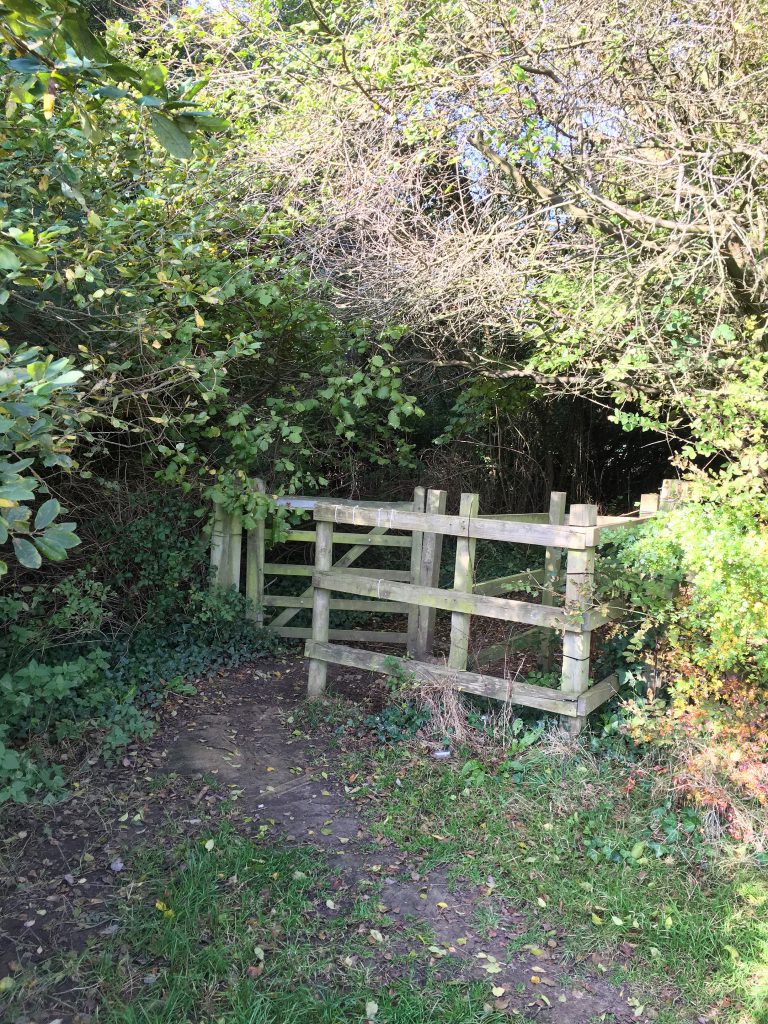 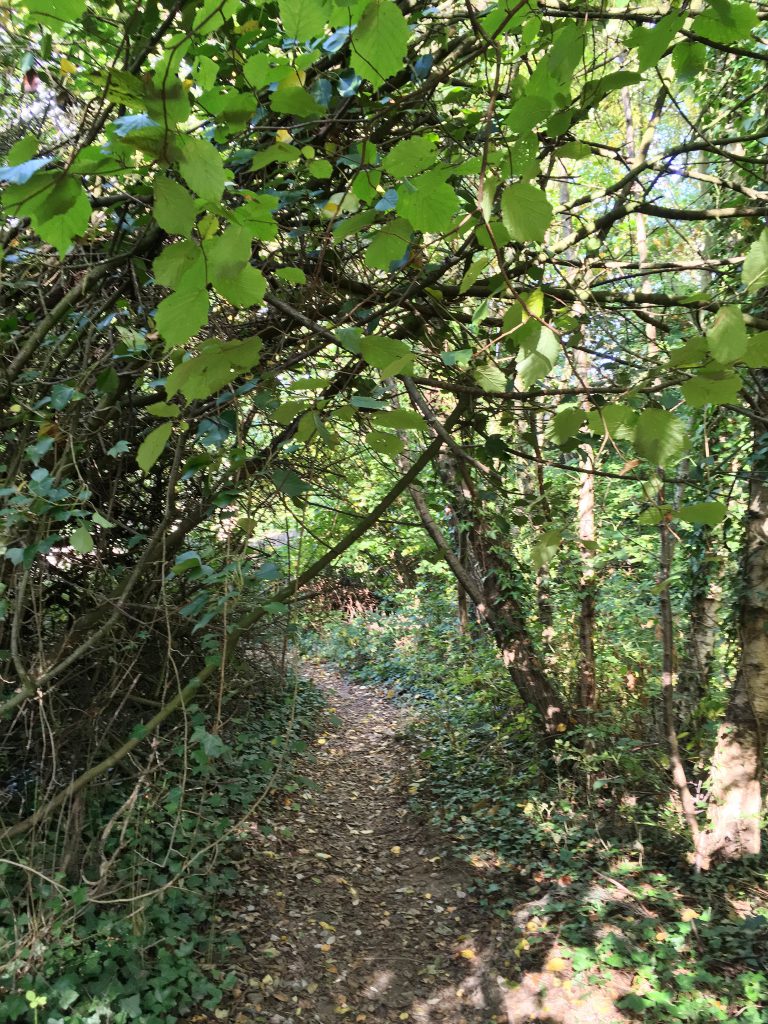 On one side the path was bordered in places by garden fences but mostly the houses and gardens were hidden by trees. It seems a terrible shame that such a lovely path will soon be gone, even if another is opened to take its place. 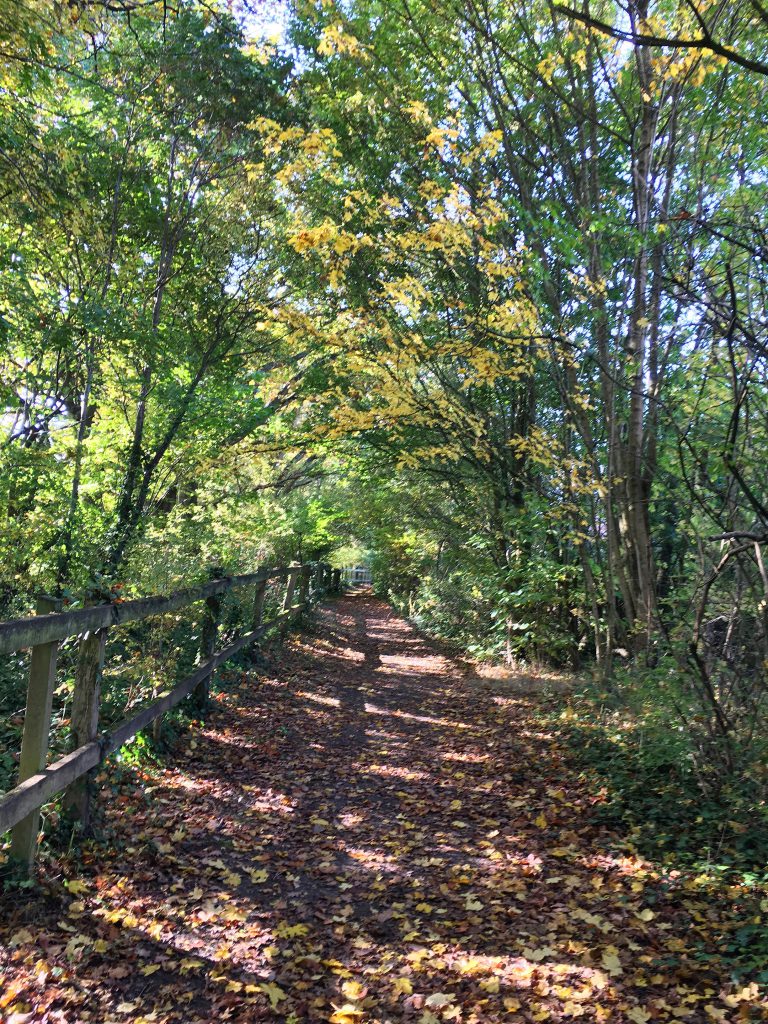 We emerged onto the road near Allington Lane. We crossed the road and began to walk along the path behind it towards Cutbush Lane and Gater’s Hill. The trees here appeared to have taken the autumn theme to heart and were dressed in coppery tones. They were a feast for our eyes. 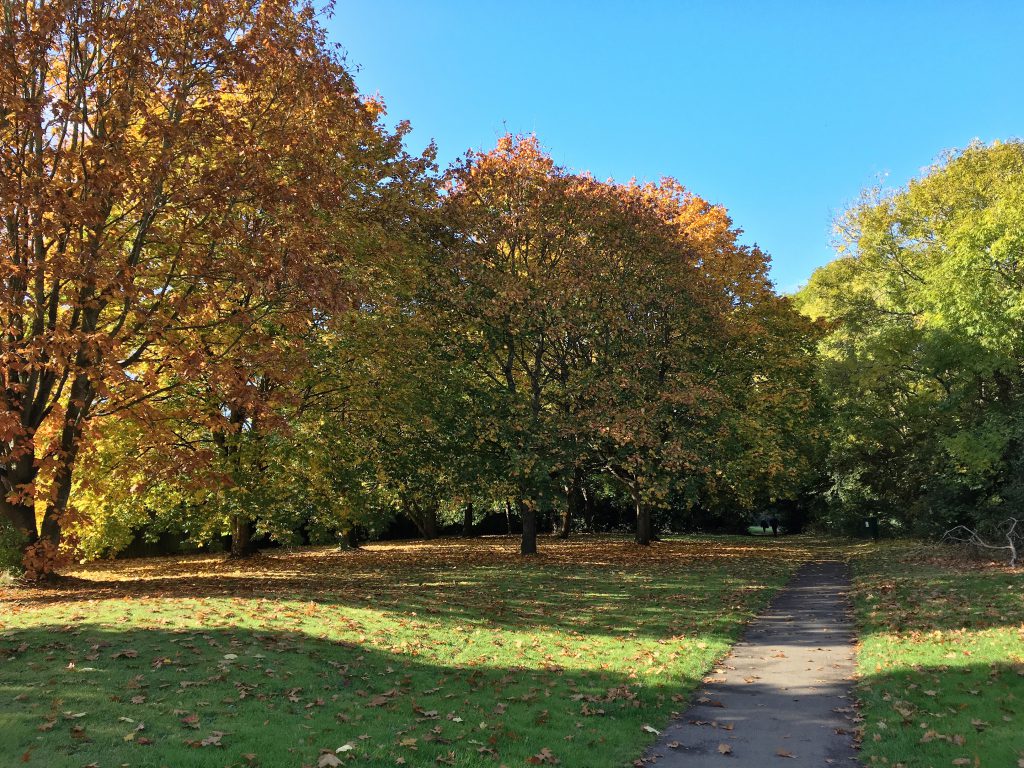 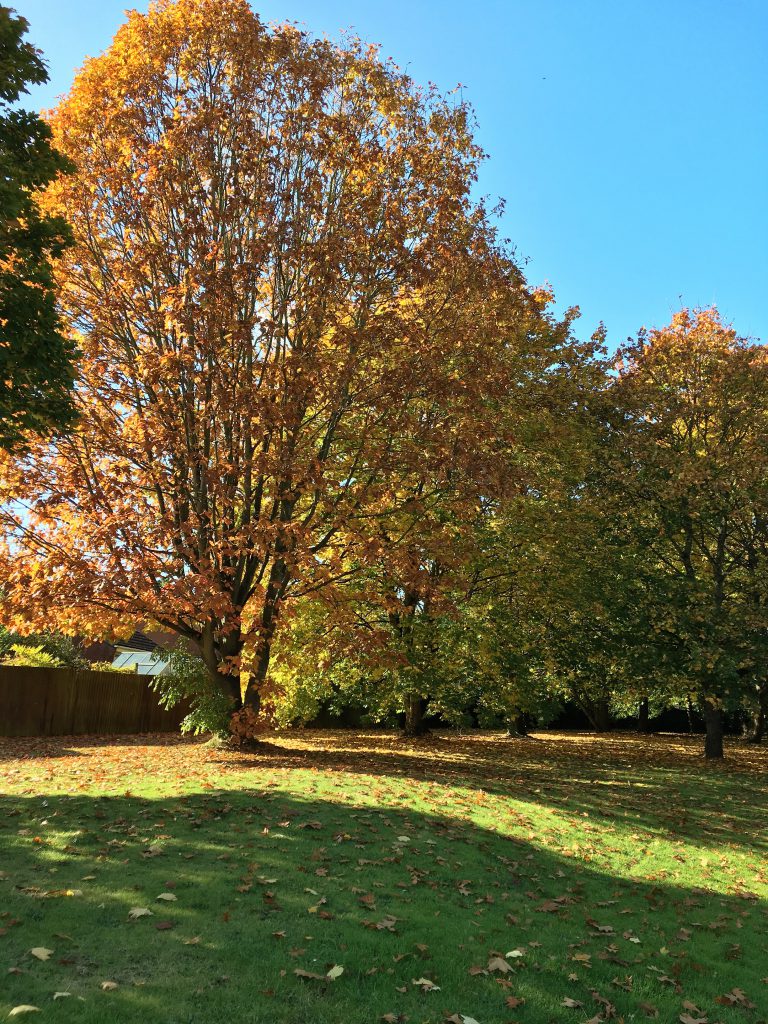 Now there was a decision to make about our journey home and I thought it was only fair to let CJ decide.
“So, do you want to walk back along Cutbush Lane, turn onto Ivy Lane and walk through West End Copse or go down Gater’s Hill and along the river?” I asked him.
His answer will have to wait for another day though… 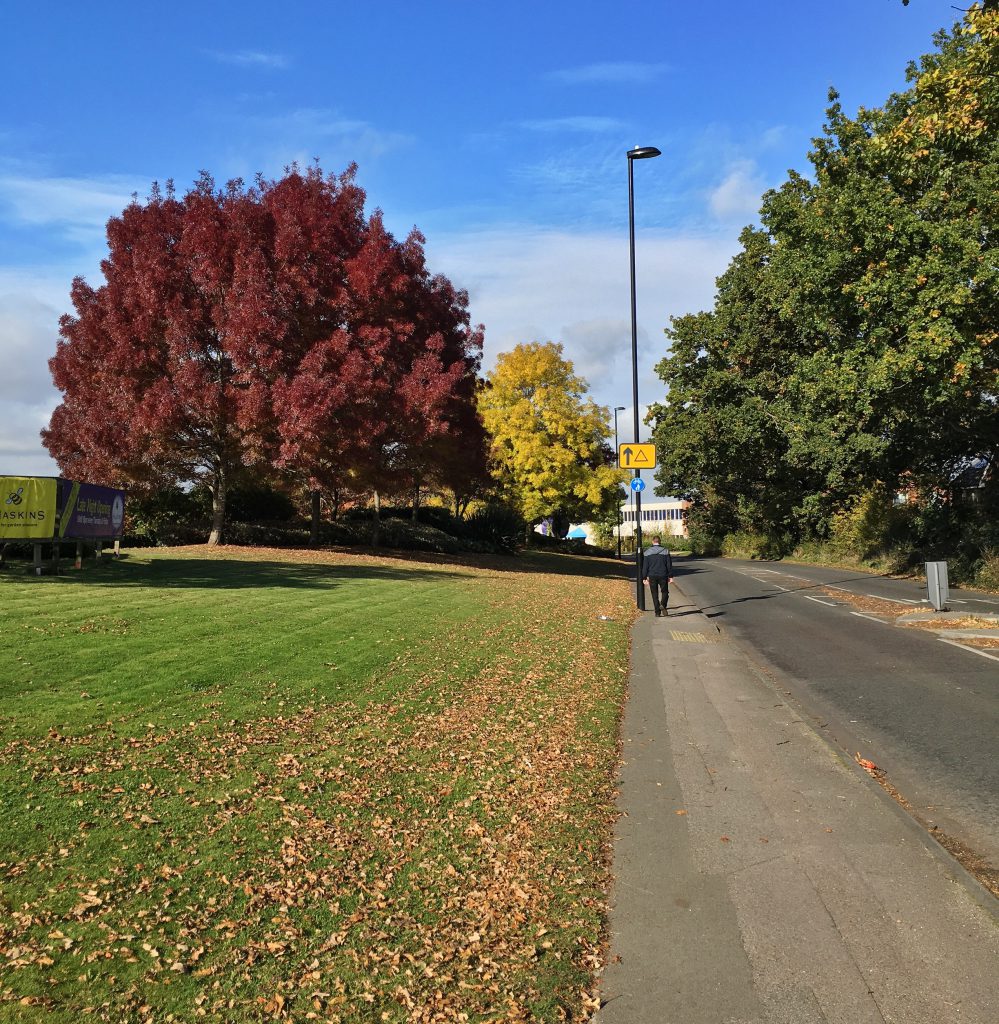 10 thoughts on “Fluttering green and gold at Hatch Grange”